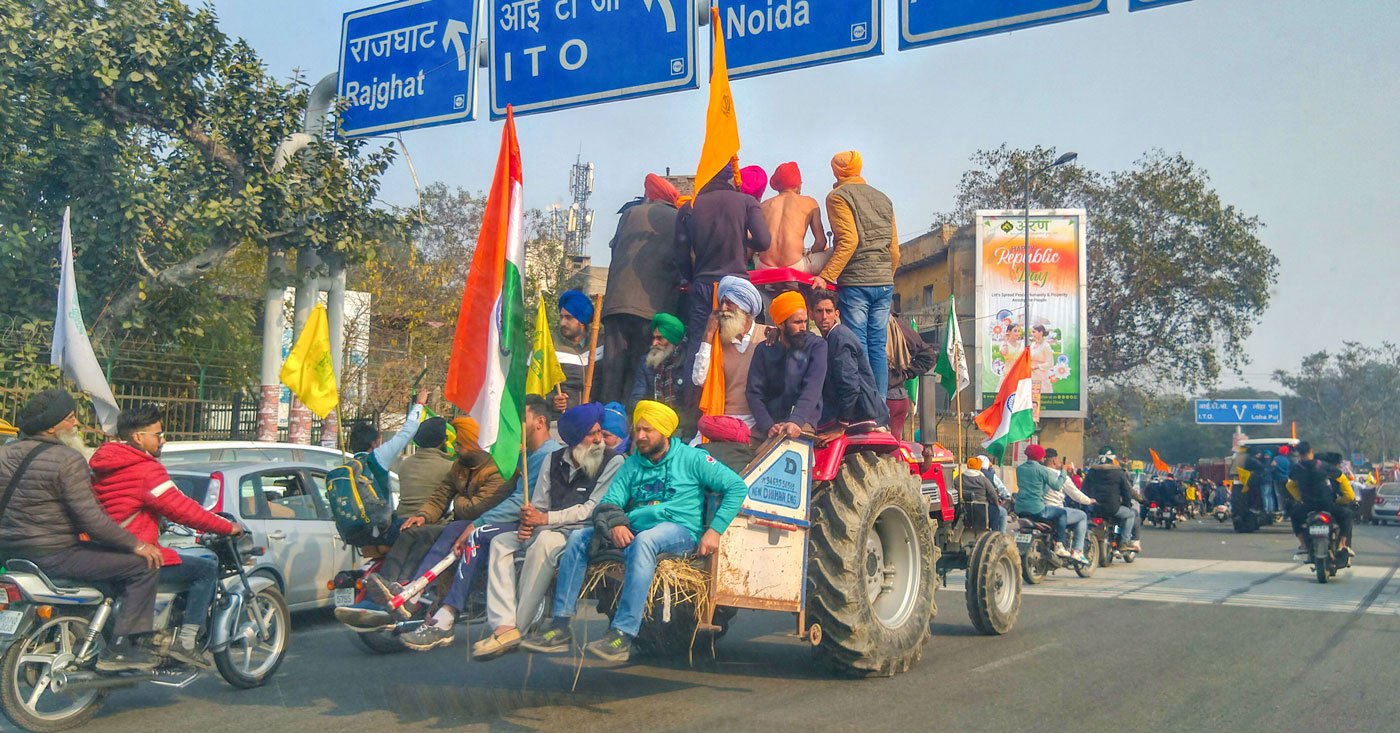 On January 26, the capital and surrounding areas witnessed both: a huge citizens’ celebratory parade and a tragic, vicious charade. Rumours played a role in the chaos around Red Fort and the ITO junction

It was a shooting that never happened. But this headline in many variations – “Farmer shot dead by police”– was going viral on social media within moments of this supposed "killing" on Bahadur Shah Zafar Marg. That death by firing never occurred. But the rumour that it did created confusion and chaos amongst those breakaway groups of protestors who came down towards Delhi’s famous Income Tax Office (ITO) junction on Republic Day, January 26. A rumour that possibly fed into the violence at other spots like the Red Fort.

The story making the rounds was that a young farmer driving a tractor had been shot dead at point-blank range by the police close. Social media, of course, needed no verification in spinning that out in all directions. Soon, it got picked up on some television channels as well. People on the ground were decrying this ‘golikand’ (firing) and alleged police violence. And protestors near the ITO junction were scattering all over the place.

Actually, the man, since identified as Navneet Singh, 45, died when the tractor he was driving overturned – with not a single shot fired by anyone. By the time that was clarified, though, that story, along with others coming out of the violence at the Red Fort, had helped eclipse the actual, giant tractor rally of the farmers protesting against three laws rammed through Parliament in September 2020.

Sad, for a day that began so differently.

India’s 72nd Republic Day started out warm and sunny, after a spell of gloom and chill. The farmers protesting at the borders of the nation’s capital for over two months were going to create history by holding peaceful tractor parades along planned routes. These would be flagged off from three borders: Singhu, Tikri and Ghazipur after the official parade at Rajpath in central Delhi would get over around noon.

These parades were to be – and indeed did become – the largest ever civilian, citizen celebrations of Republic Day. But all that was lost to public attention and interest by the evening. 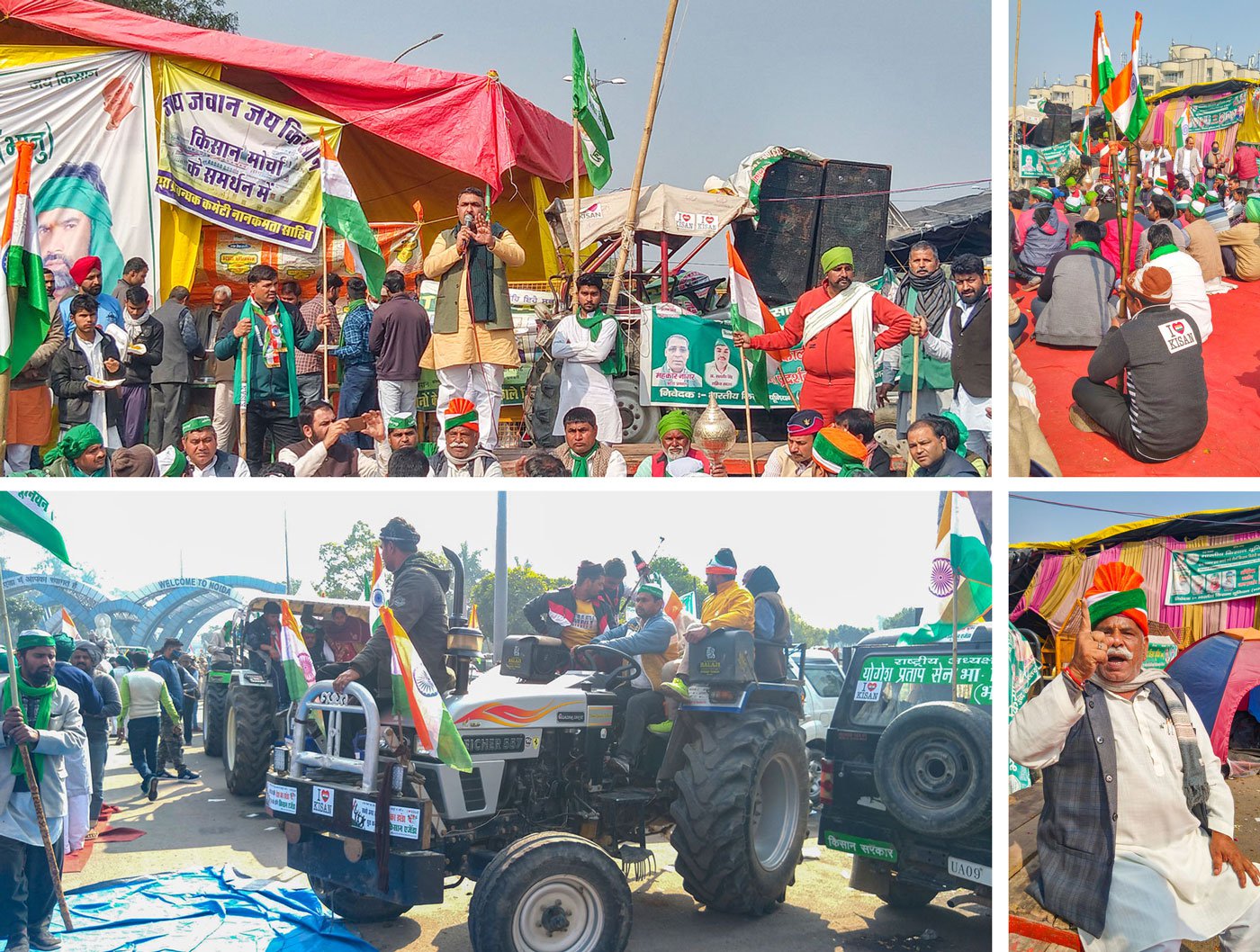 On Republic Day morning, BKU's Yogesh Pratap Singh addressed a group of farmers at the Chilla border (top row). The group set off for the tractor parade after lunch (bottom left) and Bhanu Pratap Singh of BKU's UP unit spoke to PARI about agricultural prices

Our day began with driving to the Chilla border (close to Ghazipur) between Delhi and Uttar Pradesh. The barricades to the entry point were a bit unusual: fuel carriers and DTC buses placed alongside smaller, yellow-painted movable iron gates. At the Chilla border, a big camp in white and green had been set up where a group of farmers was being told by their leaders to move along the route that was laid out, in cooperation with the police force.

Protestors here had a simple meal of dal and rice that had been prepared on site since 4 a.m.. Around noon, groups began climbing onto tractors, chanting ‘Bharatmata ki Jai , Jai Jawan Jai Kisan ’ in one breath, while popular local songs played in the background. A long line of police personnel and white coloured drone cameras watched as the tractors began rumbling onto their designated route: Chilla-Delhi-NOIDA Direct Flyover-Dadri-Chilla.

The laws the farmers are demanding be repealed are: The Farmers’ Produce Trade and Commerce (Promotion and Facilitation) Act, 2020 ; The Farmers (Empowerment and Protection) Agreement on Price Assurance and Farm Services Act, 2020 ; and The Essential Commodities (Amendment) Act, 2020 . They were first issued as ordinances on June 5, 2020, then introduced as farm bills in Parliament on September 14 and hastened into Acts by the present government on the 20th of that month.

The protestors see these laws as devastating to their livelihoods because they will give even greater power to large corporates over farmers and farming. The laws have also been criticised as affecting every Indian as they disable the right to legal recourse of all citizens, undermining Article 32 of the Indian Constitution.

The Chilla tractor parade was uneventful. It had a quick run, returning to base in under an hour. We then began making our way towards Singhu, over 40 kilometres away, where the main parade was being held. Midway, our colleagues stationed there informed us that some groups of farmers were leaving Singhu for Delhi, towards the ITO. Something unusual was happening. We changed direction to follow them. As we drove along the Outer Ring Road, several Delhi residents stood on the roadside waving out to the farmers’ groups, many of them on tractors, some on motorbikes and cars. Even a clutch of monks in maroon attire near Majnu ka Tila waved out energetically. A woman sitting in the car with her family tried handing out water bottles to the folks hanging at the back of a tractor at a traffic signal.

The big wheels of bulky tractors that help produce the country’s food were rolling onto the concrete roads of the nation’s capital – perhaps for the first time in independent India’s history. A powerful, poignant symbolic move. 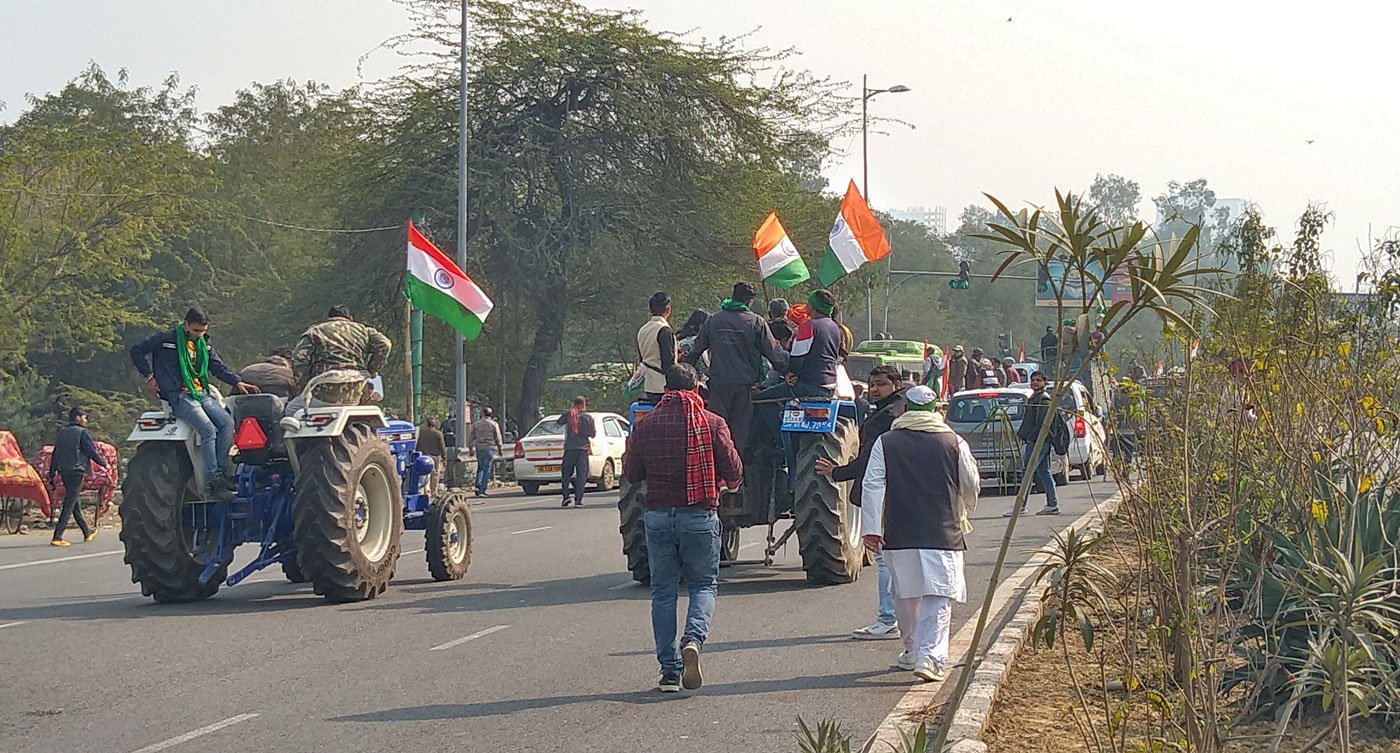 At ITO junction, tractors started closing in and converging from Ghazipur, Singhu and the Red Fort

Suddenly, there was a shift in the air – and in the prevailing mood. We heard some protesting groups had broken away and were headed towards the Red Fort, without warning. Soon enough, patchy information about clashes at the historical monument where a religious flag was rumoured to have been hoisted, started doing the rounds. The theatre of the optics that ensued, ensured that media and public attention was diverted from the key issues as well as the main tractor parades.

“Stay away from here,” a colleague just leaving the Red Fort site told us on the phone around 3:15 p.m. He had suffered bruises when some protestors – perhaps enraged by various rumours – ran amok, and a very expensive camera lens of his was smashed. We continued towards ITO where some tractors started closing in and converging from Ghazipur, Singhu and the Red Fort. Soon, the stretch outside the old Police Headquarters was milling with tractors and people.

A trio of men from Gurdaspur in Punjab were angry: “I came to Singhu on January 22 on my tractor. We’ve been up since 4 a.m. today, on Republic Day. There are over 2 lakh tractors in this parade. We too are celebrating our republic. These laws will only benefit the corporates, not the farmers.” It looked like they genuinely believed they were part of the larger, legitimate parade – the peaceful one that was even then going on along the designated routes. This confusion was reflected among protestors in other areas as well.

But there were others among the protestors who had entered the city, who were not confused. Who seemed to know what they were doing and why they were here. Who had an agenda of disruption, mischief and vandalism – and were quite aware their actions would harm the incredibly disciplined peaceful rally that lakhs of farmers were participating in on the capital’s borders. As some of them told me: “Yes, it is a good thing to have put that flag on the Red Fort, we had intended doing it ourselves” – and showed me that they too were carrying one. 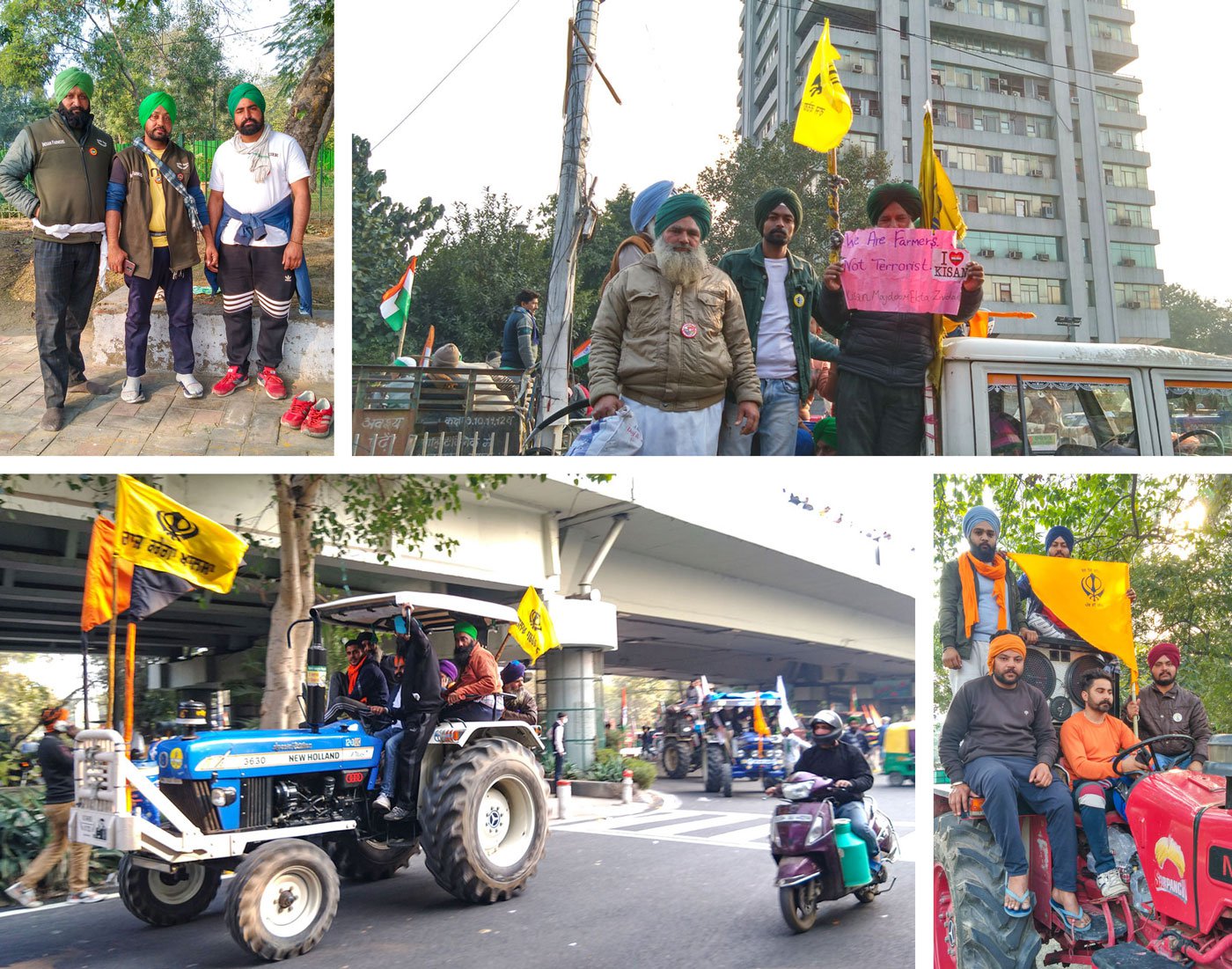 Top left: 'These laws will only benefit the corporates', said a trio of men from Gurdaspur. Top right: Ranjit Singh (middle) said, 'Today’s Republic Day will go down in history'. Bottom row: The ITO area was milling with tractors and protestors, including Pawandeep Singh (in orange)

“The government keeps talking about ‘ Hindu rashtra’ , as if no one else exists in this country. The [religious] flag hoisting at Red Fort today was a challenge to that idea,” 26-year-old Pawandeep Singh asserted.

Confusion in some and dubious commitment in others was opening a pathway to chaos.

“Today’s Republic Day will go down in history, people will remember this tractor march in times to come,” 45-year-old Ranjit Singh told us.

It was around this time that Navneet Singh’s tractor overturned, and the rumours took wings. His dead body was covered and surrounded by a large group of protesters who sat on the road and mourned him, while the police kept an eye on them from some metres away.

Another man, Ravneet Singh, 20, a resident of Bilaspur in Punjab, had been rumoured to be hit in the leg by a bullet. Lying on an elderly friend’s lap on the road next to where the deceased Navneet Singh lay, Ravneet was having his wound tended to. He clarified to the media present that he had not been struck by any bullet but had been injured during the melee that followed the police teargassing protestors near the ITO. His voice was drowned out by a middle-aged man who categorically told camerapersons to back off and not bother them if they were not going to present the whole truth to their audiences.

Near the ITO was another group of young farmers in their 20s, from Mohali, perched on a tractor, apparently awaiting instructions from their group leader about where to proceed next. They were hesitant to talk to us, asking if we were from the ‘IB’. When we clarified that no, we were not from the Intelligence Bureau, they said they had heard that the police had fired on someone in the tractor parade and that was wrong. The protest had been peaceful so far, but this was a provocation, they said.

A crowd gathered to mourn the passing of Navneet Singh, who died after his tractor upturned at a crossing in ITO

Srimati Antil (left) insisted that the government has to give in. Ajay Kumar Siwach (far right) said: 'I have been both, a jawan and kisan , but I’ll always remain a kisan '

“The government shouldn’t be killing farmers, they should be killing their laws instead,” they told us, adding proudly that “this is probably the longest protest in the history of this country.”

As we moved around, trying to verify the cause of Navneet Singh’s death, and talk to other protesters, we came across Ajay Kumar Siwach, a 45-year-old former armyman originally from Bajpur, Uttarakhand, now based in Meerut, Uttar Pradesh.

“If agriculture stops in this country,” said Siwach, “the government will stop. I’m a pensioner and now a farmer growing sugarcane and wheat. I spent nearly 20 years in the army, serving Jammu and Kashmir, Rajasthan, Uttar Pradesh and Ladakh before coming to farming. I have been both, a jawan and kisan , but I’ll always remain a kisan . Today is an important day for me, as it is for all of us. We collected Rs. 60,000 from people in our village to be able to come to Delhi for the protest.”

A bright bottle-green turban worn by Srimati Antil, 48, a farmer from Sonipat, Haryana, who cultivates corn, cucumbers, potatoes, and carrots, caught our eye. She told us that she had been at the farmers' protest for the last two months, going back and forth between home and Singhu. “My husband takes care of our 10-year-old son and 17-year-old daughter when I am at Singhu. Today, Punjab, Haryana and Uttar Pradesh have come together on India’s Republic Day. Whatever is going on is leading to a loss for everyone. Almost 200 farmers have been martyred in recent times, the government has to give in. All these farm laws will only benefit the Ambanis and Adanis, not us.”

As the sun began to sink for the day, some of the tractors at ITO began rumbling back to the borders they had started from. The capital and surrounding areas had witnessed both a massive, peaceful, celebratory parade and a tragic, disruptive, vicious charade.