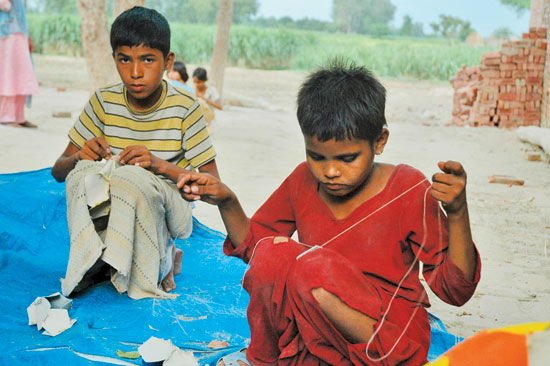 No Free Kicks in Meerut

In a World Cup year, a visit to Sisola near Meerut, considered the football-makers ‘headquarters’, where women and children earn at most Rs. 5 per football they make

The cost of the beer three friends can knock back watching a World Cup match at a South Delhi pub is what Ishwari’s family of 17 makes in a month — just around Rs. 1,000 — stitching footballs in Kherkhi village near Meerut. Waking up early to deal with the household chores, the women and older children of the family settle down, after the men go out to work, to an arduous seven-hour routine. Ishwari, who is in her 60s, says the men don’t mind the women in the family doing this work since it doesn’t involve their leaving the house except to bring raw materials and deliver the finished goods. The family’s one financial buffer is its small plot of agricultural land — most others in the football-stitching trade in the 50-odd villages around Meerut have no such additional sources of income.

Ishwari’s family are Dalits — most ‘football-stitchers’ in the 50-odd villages around Meerut are either Muslims or landless Dalit labourers. In an average seven-hour work day, an adult can turn out three footballs; a child can make a maximum of two. For these, they are paid a measly Rs. 3 if it’s a small to average sized football, Rs. 5 for larger ones. A family of six, making around eight footballs a day, can expect not much more than Rs. 600 to Rs. 900 a month, the amount varying according to demand. Footballs, even in the local retail market, are priced anywhere between Rs. 100 and Rs. 300. If a stitch comes undone, the contractors deduct the repair cost from the labourers’ wages. In case of severe damage, such as a punctured bladder, the entire cost is recovered from the makers.

India is said to be second only to Pakistan as a producer of footballs; Sialkot in Pakistan, and Jalandhar and Meerut in India are the sport’s main manufacturing centres. For this year’s World Cup, Sialkot has exported nearly 55 million footballs to Germany; Jalandhar had the ‘star contract’ in 2002. As the World Cup pushes the football demand graph steeply upwards, some contractors call for as many as 25,000 units a day. In this rare, bumper event, the wage per unit is hiked by a mere 50 paise. With no union, bargaining power or alternate means of sustenance, the villagers acquiesce. If they refuse to work at the going rate, someone else will readily agree to do so for less — this way, at least, they’re earning 'something'.

On any given day in the tiny homes and narrow gullies of Sisola, considered the football-makers ‘headquarters’, all that can be seen of the village’s women and children are several scrawny backs hunched over the wooden apparatus of their trade, its dual needles darting in and out of the colourful pentagonal pieces of rubberised material it holds. However nimble one’s fingers, punctures from the sharp needles are frequent, as are cuts from the silk threads used to suture the material. Then there’s the inevitable damage to eyesight, brought on by the long hours of squinting. “They’ve never been trained by anyone to sit properly,” says local activist Sher Mohammad Khan, “and they end up with back problems.” With no local healthcare systems, the villagers prefer to rely on rough-and-ready home methods. Even if there are the rare doctors, they are unable to afford the costs. 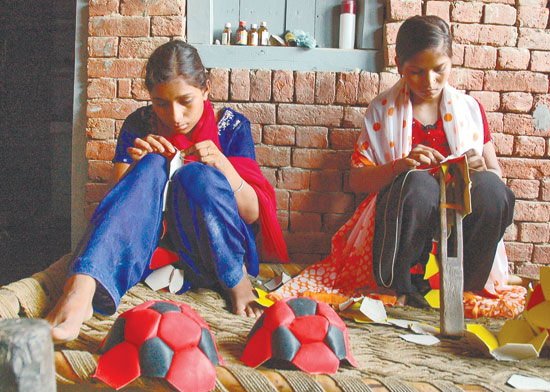 The World Cup season has taken children out of school; the increased demand has necessitated their being kept home to stitch the balls that will fetch their families an additional income. Khan says that there is only one primary school in the village. Private schools, at a minimum cost of Rs. 500 per child each month, inclusive of fees and stationary, are unaffordable. With more than three children per average household, providing for their education is hard. Work is the one viable option many families see for their kids.

The story told from the contractor’s side may seem marginally better. Chandarbhan, 60, is one of a handful of contractors in Sisola. He says the wage per unit is fixed according to the size of the football: Rs. 4 for the smallest, and Rs. 5.5 for larger ones. Tell him that the villagers have stated different figures, and he turns his head away in denial. Contractors like Chandarbhan buy the synthetic football material in sheets from rubber industry agents at Rs. 26 per piece. The sheets are then machine-cut into pentagonal pieces. One sheet makes a single football. Add to this: thread at Rs. 220 per kilo, another Rs. 3-4 for labour — the total cost of production is around Rs. 31-32 for one football. Averting his eyes, Chandarbhan says he sells to the distributor at a maximum profit of a rupee or two. The labour rate has been unchanged for the last 10 years, if not more. “We also worked at this rate,” claims Chandarbhan. Mention inflation and he mumbles something incoherent.

What about the repair deductions and the threats of getting his work done by others if his rates are refused? Chandarbhan maintains that he pays for damages from his own pocket; for the rest he has a pragmatic explanation. “There’s so much unemployment in this country; at least we’re giving them work so they can support themselves.” Chandarbhan has two children; one of them assists him while the other is in college. “I’ll make my second son a supplier or a distributor,” he says.

Global March Against Child Labour is an international social movement that has been involved with the struggle to eliminate child labour from the soccer industry. In 2002, they had appealed to FIFA to take up the plight of children working in the sporting-goods industry, especially in football manufacturing units. This resulted in FIFA’s introducing a code of conduct, in collaboration with the World Federation of Sporting Goods Industry, to monitor both the Indian and the Pakistani football-making sectors. According to Global March, FIFA has failed to implement its own code and, despite pledges to eradicate child labour, 10,000 children are still involved in making footballs in Jalandhar and Meerut. Global March chairman Kailash Satyarthi says the group’s Indian arm, Bachpan Bachao Andolan, is looking at developing 10 villages in Meerut’s Janikhurd block as ‘child-friendly villages’, where it will ensure that children go to school regularly. Pohli village in Daurala block is cited as an example of the endeavour.

Meanwhile, in Sisola, if you ask the kids here who’s the best footballer, they yell in chorus, “Dhoni! Sachin!” Ask them who’ll be defeated in the World Cup and the answer is pat: “Pakistan!” Khan smiles; the only game these child football-makers know is cricket, he says.

This story was first published in Tehelka.