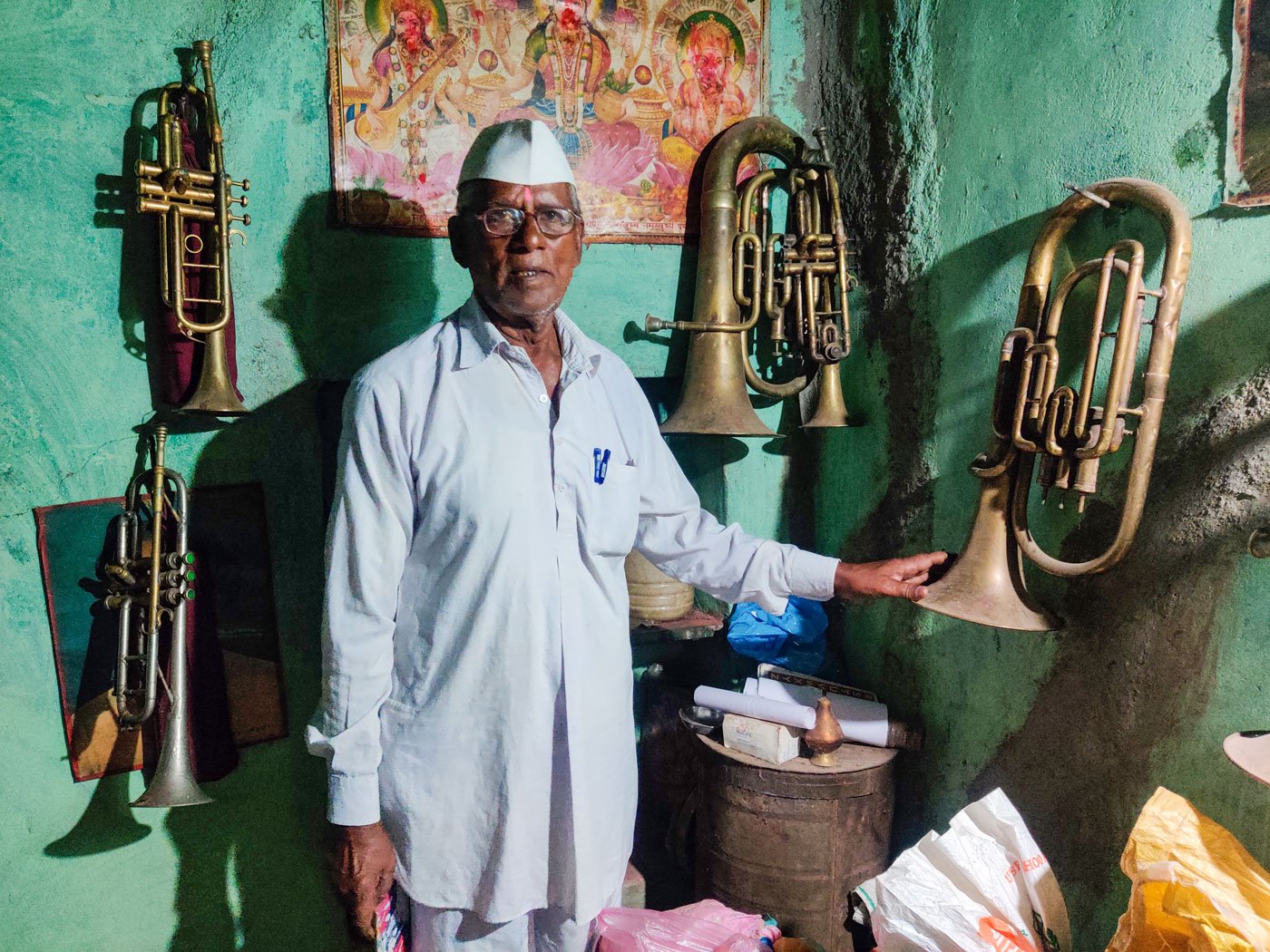 'We didn’t know our situation could get worse'

In Maharashtra's Beed district, the Misal, Waghamare and Bhutadmal families – who were surviving in a struggling rural economy as it is – are now hit hard by the pandemic-induced recession

First it was his father. Then his mother the next day. Purushottam Misal was in a panic when his parents developed a fever one after the other in May 2021, during the second wave of Covid-19. “Several people in the village had already tested positive,” says Vijaymala, Purushottam’s wife. “It was scary at that time.”

Purushottam had read the reports about public hospitals overflowing with patients in his district of Beed in Maharashtra. “He knew he would have to admit his parents in a private hospital, and the treatment would be expensive,” says Vijaymala. “If a person spends [just] a week in the hospital, the bill is in lakhs [of rupees].” Much more than what Purushottam earned in a year.

Despite their poverty, the family had managed to survive without any debt. The thought of borrowing money for hospital expenses distressed 40-year-old Purushottam, who ran a tea stall in Sirsala, 10 kilometres away from Hiwara Govardhan, his village in Parli taluka . The shop had been mostly shut since the outbreak of Covid-19 in March 2020.

The night his mother developed a fever, Purushottam was tossing and turning in bed. And at about four in the morning, he said to his wife: “What if it is Covid?” He was wide awake and staring at the tin roof of their home, remembers Vijaymala, 37. When she told him not to stress out, “He said ‘don’t worry,’ and asked me to go back to sleep.” 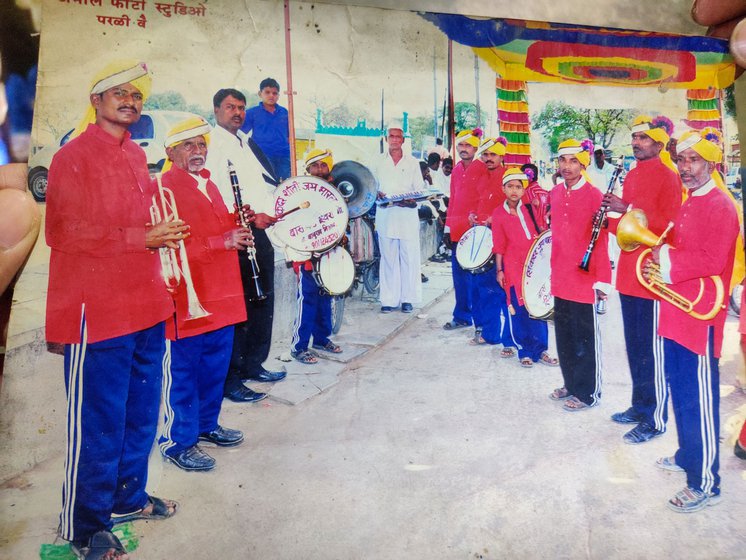 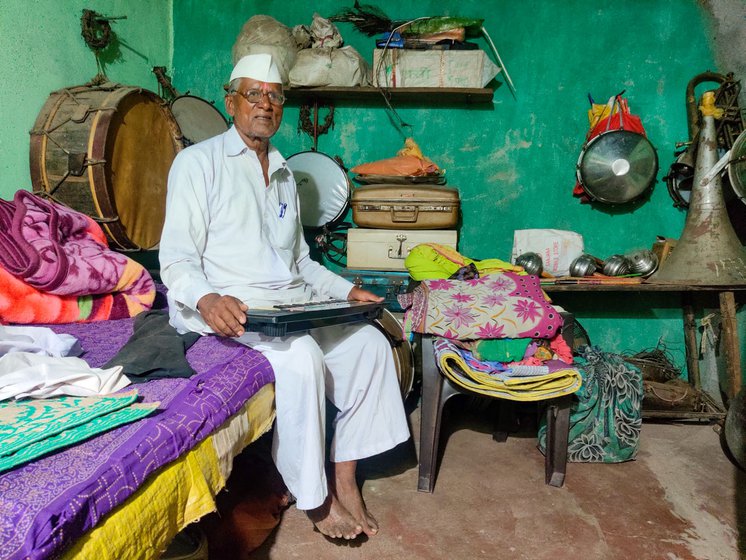 Left: A photo of the band in which Purushottam Misal (seen extreme left) played the trumpet. Right: Baburao Misal with his musical instruments at home

Soon after that, Purushottam left the house and walked towards his tea stall. In an empty shed nearby, he hanged himself from the ceiling with a rope and ended his life.

With no farmland to their name – his family belongs to the Matang community, a marginalised Dalit caste in Maharashtra – selling tea and biscuits was one of Purushottam’s main sources of income. He also worked in a band in his village, which mostly played at weddings. His family of seven was dependent on him. “He would make about Rs. 5,000-8.000 a month from the tea stall,” says Vijaymala. And with what he earned from the band, his total income came up to about Rs. 1.5 lakhs in a year.

“My son was a good musician,” says his 70-year-old mother Gangubai, her voice filled with sadness. Purushottam played the trumpet and sometimes, keyboard and drums. “I also taught him the shehnai ,” says his father, Baburao, 72, who has taught 25-30 people in the village to play musical instruments. Baburao is known as ‘ ustaad ’ (maestro) in his village.

But the band had no work because of Covid. Vijaymala says: “People are afraid of the virus, but they don’t have the money to buy a cup of tea or hire a band at a wedding either.” 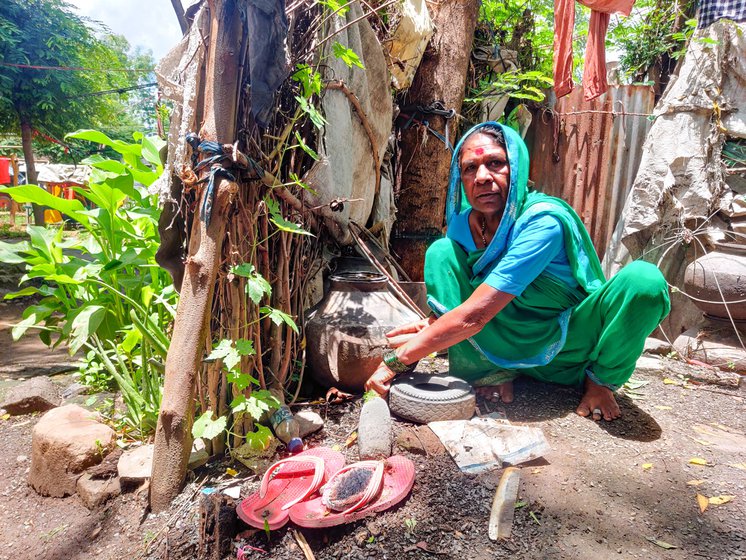 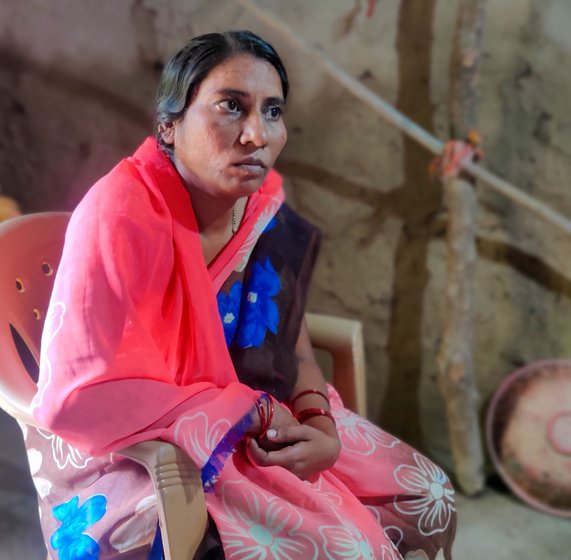 Left: Gangubai Misal says Purushottam was a good musician. Right: Vijaymala Misal remembers her husband being in a panic when his parents fell ill

A report published by the US-based Pew Research Center says: “The number of people who are poor in India (with incomes of $2 or less a day) is estimated to have increased by 75 million because of the Covid-19 recession.” This, and the shrinking of the middle class in India by an estimated 32 million in 2020, accounts for 60 per cent of the global increase in poverty, notes the March 2021 report.

The decline in people’s purchasing power is visible in Beed – a predominantly agrarian district where farmers have been struggling with debt and distress for more than a decade due to prolonged drought. Covid-19 has added to the burden of families trying to survive in a struggling rural economy.

Even though Purushottam did not directly depend on farming for his livelihood, most of his customers were farmers. And when their incomes collapsed, the impact was felt all the way out on the periphery of the agrarian society – by cobblers, carpenters, barbers, potters, tea sellers and others. Many are now wondering how to sustain their livelihoods.

At her shop in Beed taluka ’s Kamkheda village, on a quiet weekday, 55-year-old Lakshmi Waghmare thinks back to pre-Covid times. “We didn’t know our situation could get worse,” she says with irony. 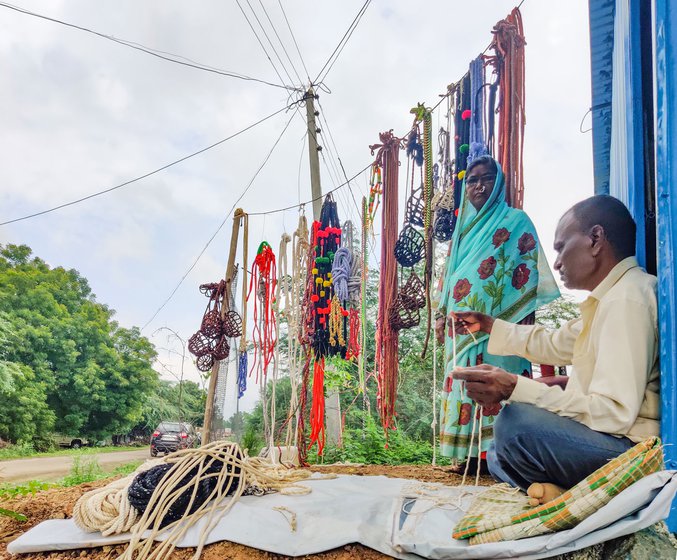 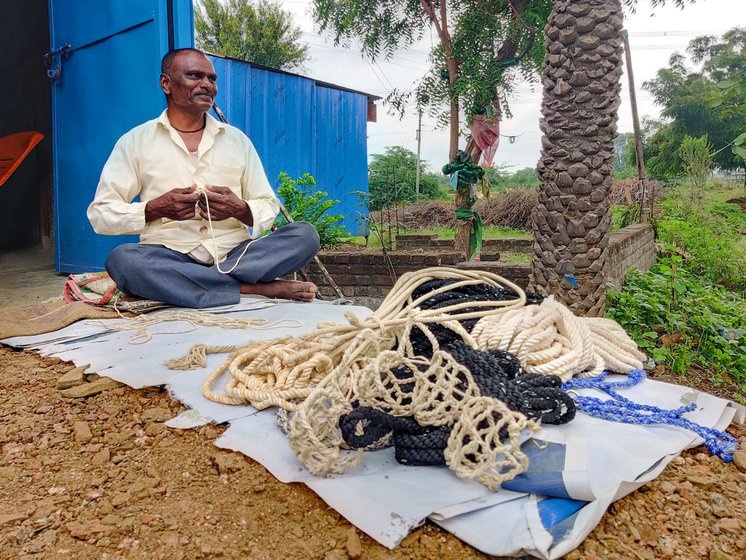 Lakshmi and Nivrutti Waghmare sell their ropes at their shop in Beed's Kamkheda village; they have been waiting for the village bazaars to reopen

Lakshmi and her husband, Nivrutti Waghmare, 55, make a variety of ropes. A Nav Bauddha (Neo Buddhist, formerly Dalit) couple that don’t own land, they solely depend on their craft, which is a hereditary occupation. Until the pandemic broke out, they used to sell their ropes at the weekly bazaars in villages.

“You could find everyone at a bazaar. It would be busy with activity,” Nivrutti says. “Livestock was traded, farmers sold vegetables, and potters sold earthen pots. We would sell rope. After purchasing cattle, farmers usually buy rope with which they tie the animals.”

Until the novel coronavirus surfaced, bazaars were the backbone of rural economy, enabling an easy trade of goods. “We would attend four bazaars in a week, and sell rope worth Rs. 20,000,” says Lakshmi. “Our profit was Rs. 4,000 [average per week]. Since Covid, we sell rope worth Rs. 400 per week so don’t even ask about profit.” In April this year, Lakshmi and Nivrutti sold the tempo they had been using to transport the ropes, for Rs. 50,000. “We couldn’t afford to maintain it any longer,” says Lakshmi.

Rope-making is a strenuous task that requires skill. In pre-Covid times, Lakshmi and Nivrutti used to hire labourers for the job. Now, their son works as a labourer at construction sites, and earns about Rs. 3,500 a month “so we can survive,” says Lakshmi. “The ropes we have at home are getting old and discoloured.” 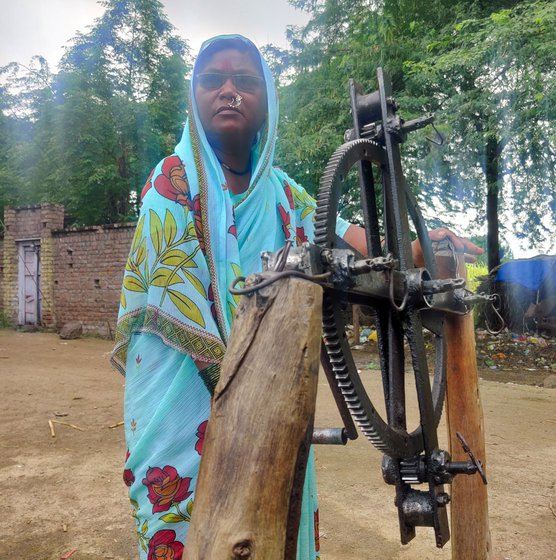 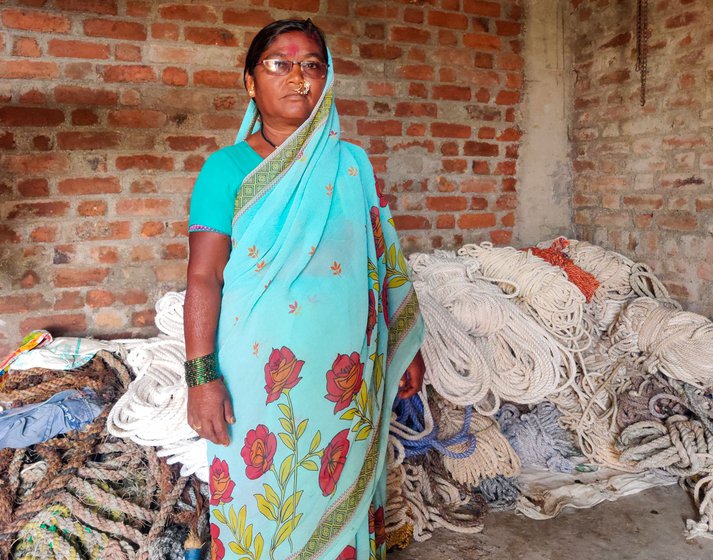 Left: Lakshmi outside her house in Kamkheda. Right: Their unsold stock of ropes is deteriorating and almost going to waste

About 10 kilometres from Kamkheda, in Padalsingi village, Kantabai Bhutadmal has also been missing the bazaars. She doesn’t know where to sell the brooms she makes. “I used to take my brooms to the bazaars and I also went from village to village selling them,” she says. “The bazaars are not open, and the police don’t let us travel because of the lockdown. I can only sell my brooms if someone comes to the village to buy them. How much money can I make out of it?”

Kantabai, who is 60, is feeling her eyesight weaken with age, but she has to make the brooms to earn an income. “I can’t see you properly right now,” she tells me while continuing to bind a broom as if she were on autopilot. “My two sons don’t work. My husband rears some goats, but that’s about it. Our survival mainly depends on the brooms.”

When I ask her how she can make the brooms without being able to see clearly, she says, “I have been doing it all my life. I can do it even if I go completely blind.” 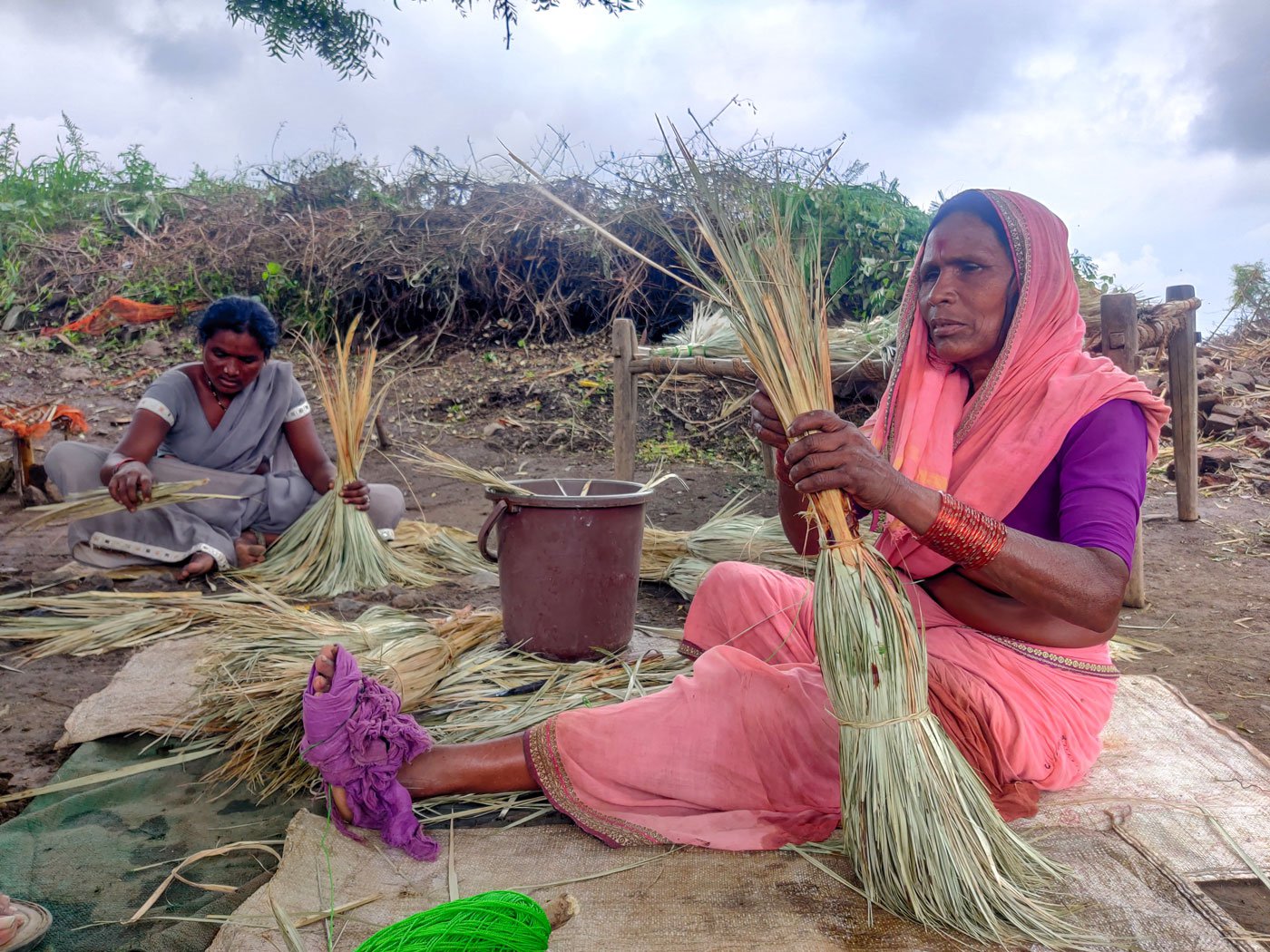 Kantabai Bhutadmal (in pink saree) binds brooms despite her weak eyesight. Her family depends on the income she earns from selling them

Kantabai is waiting for the bustling bazaars to open so she can sell her brooms there. The bazaars would also help Baburao, who has come out of retirement to manage Purushottam’s tea stall after his death by suicide. “People usually stop by for a cup of tea before heading back home from the bazaar,” he says. “I have to look after the family now, they are my responsibility.”