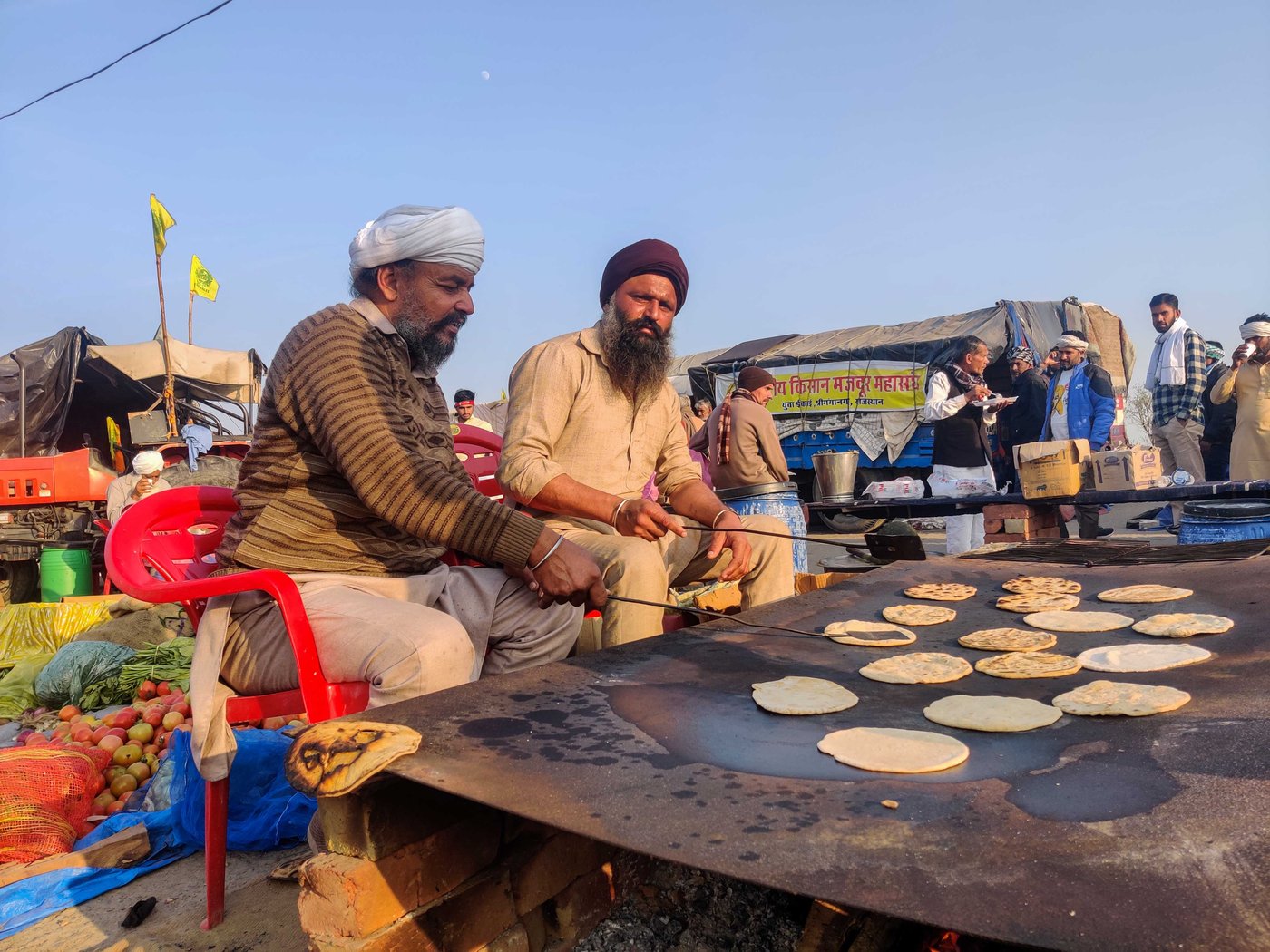 ‘Farming is our religion, we love to feed people’

Punjab's Gurudeep Singh and Rajasthan's Bilawal Singh run langars at the Shahjahanpur protest site, and say this government is used to dealing with hungry protestors so they are ensuring everyone here is well-fed

“ Gharo jao rajj ke, kaam hoga gajj ke [If you leave the house with a stomach full of food, you will ace your mission].”

That’s Bilawal Singh’s simple philosophy of running a langar for protesting farmers at Shahjahanpur. “This government is used to dealing with hungry protestors,” he continues, speaking in Punjabi. “Let’s see how they tackle protestors eating plenty.”

Bilawal, 32, and his cousin Rashwinder Singh, 30, farmers from 41 RB village in Rajasthan’s Ganganagar district, are among the thousands of protestors camping at Shahjahanpur on the Rajasthan-Haryana border, around 120 kilometres to the south of Delhi.

It’s one of the sites in and around Delhi where lakhs of farmers and numerous farm unions, mainly from Haryana, Punjab and Rajasthan, have been engaged in sit-in protests since November 26, demanding the withdrawal of the three new farm laws pushed through by the central government in September this year.

The laws were first passed as ordinances on June 5, 2020, then introduced as farm bills in Parliament on September 14 and hastened into Acts by the present government on the 20th of that month. The farmers see these laws as devastating to their livelihoods because they will expand the space for large corporates to have even greater power over farmers and farming. They also undermine the main forms of support to the cultivator, including the minimum support price, the agricultural produce marketing committees, state procurement and more. 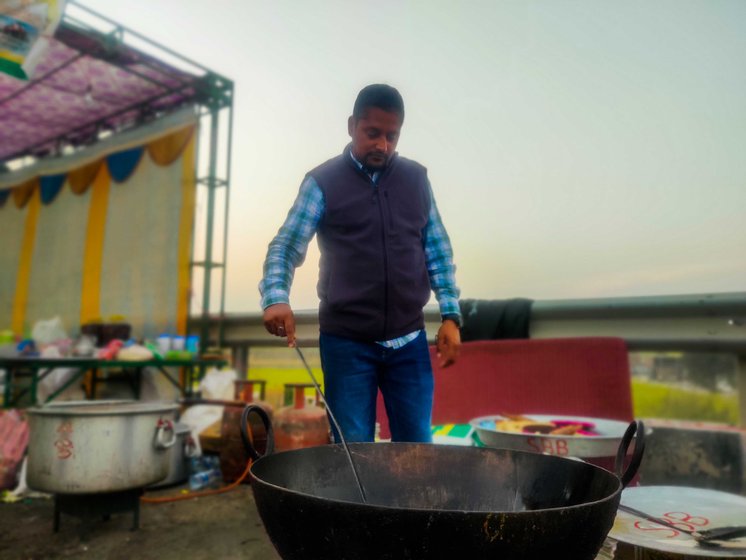 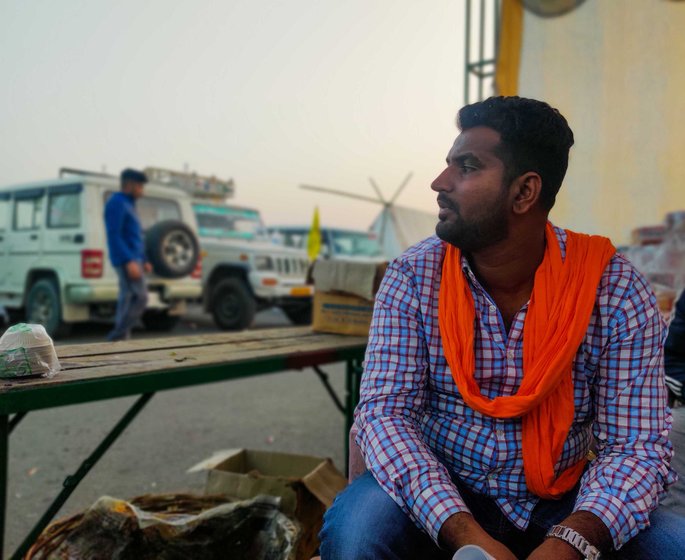 Bilawal Singh (left) and his cousin Rashwinder run a langar at the Shajahanpur site: 'We have enough supplies coming in. We can stay here till the 2024 elections'

The laws the farmers are protesting against are the Farmers (Empowerment and Protection) Agreement on Price Assurance and Farm Services Act, 2020 , the Farmers’ Produce Trade and Commerce (Promotion and Facilitation) Act , 2020 and the Essential Commodities (Amendment) Act, 2020 . The laws have also been criticised as affecting every Indian as they disable the right to legal recourse of all citizens, undermining Article 32 of the Constitution of India.

“We have been running a langar here since the third week of December,” says Bilawal, sitting alongside huge vessels brimming with the kadhi and puris they have made for the day. “We were at the Tikri border [in West Delhi] before that.”

Bilawal and Rashwinder shifted base to Shahjahanpur when they realised it needed more hands; Tikri and Singhu are far bigger protest sites, where the resources are also relatively better for the gathered protestors.

There are now five langars running at Shahjahanpur, most of them have shifted here from the other protest sites. “Farming is our religion,” says Bilawal. “We love to feed people. Farmers and gurudwaras are donating the raw items [for cooking meals]. We have enough supplies coming in. We can stay here till the 2024 elections.”

The cousins, who own 40 acres of land each and mainly cultivate wheat, rice, mustard, chana and cotton, are fiercely critical of the farm laws – not only have they studied these documents, they are also speaking from experience. One of the contentious laws covers contract farming and protects the interests of large corporations entering into the contract, while leaving no avenue for the farmers to seek redress. Bilawal knows a thing or two about this. 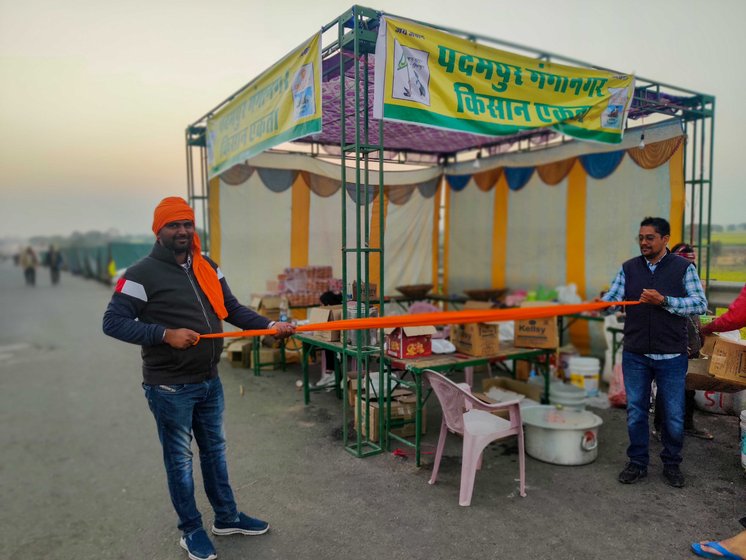 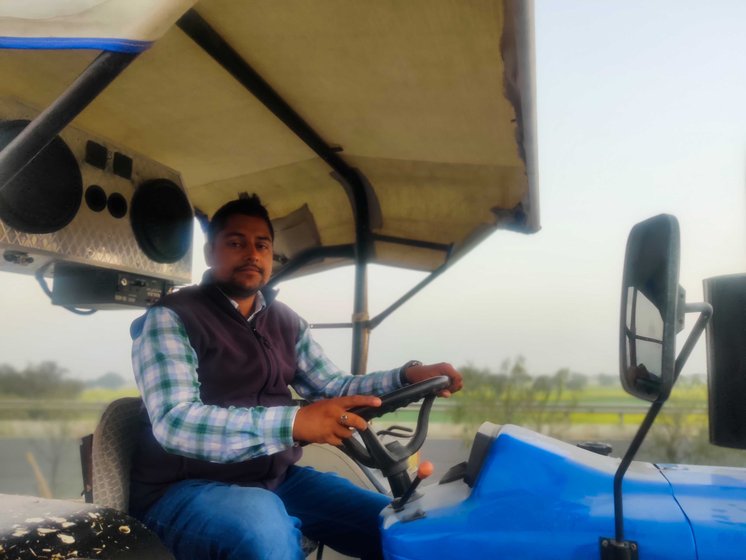 One of the new laws covers contract farming and protects large corporations, leaving no redressal for farmers. Bilawal has already had this experience

In November 2019 he had sealed a contract with PepsiCo to cultivate barley, and bought seeds for the crop from the company. “They promised to procure it from me at Rs. 1,525 per quintal,” says Bilawal. “But when I harvested the crop [around April 2020], they made me run around for two months, saying the quality is not okay or we need to see more samples.”

Bilawal believes the lockdown made the company cut down on its barley stocks due to the declining liquor consumption. “So PepsiCo went back on its word,” he says. In June 2020, Bilawal ended up selling for Rs. 1,100 per quintal in the open market at Padampur mandi (the taluka in which his village is located).

By selling the 250 quintals of barley he had harvested for Rs. 415 per quintal less than what he had counted on, Bilawal incurred a loss of over Rs. 1 lakh. “There is little redressal mechanism in any case,” he says. “This bill [the new law] makes it worse.”

Alluding to lessons from history, Rashwinder says that when Mahatma Gandhi and Sardar Patel fought for indigo farmers in Champaran, Bihar, in 1917, they too were protesting against a form of contract farming. “Modi keeps quoting both of them in his speeches,” he says.

Rashwinder speaks of other lessons too. “What happened to education or health after privatisation?” he asks. “The condition of government schools and hospitals today is horrible. When the home minister gets sick, he also goes to a private hospital. By privatising agriculture, the state is running away from its responsibilities.” 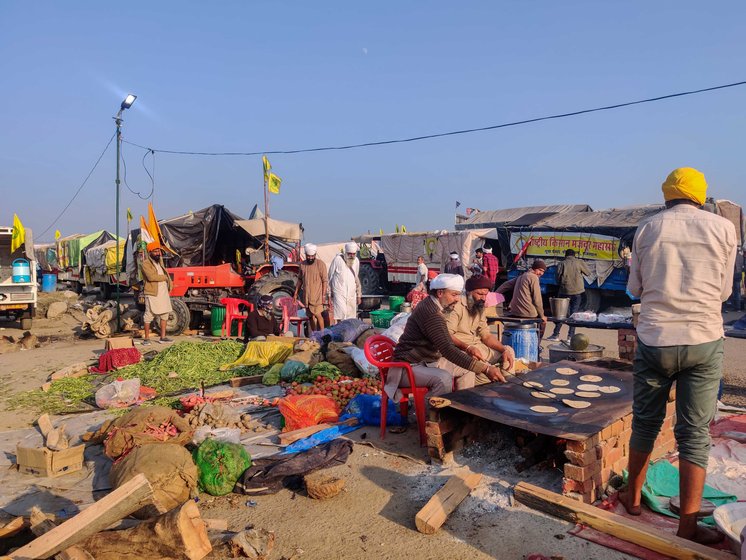 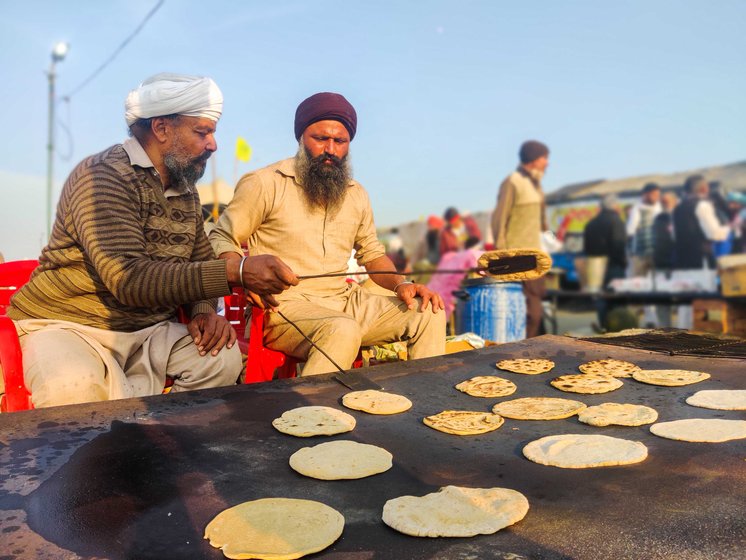 Gurudeep Singh (in white turban ), says, 'MSP [minimum support price] is very important for us. Without it, we are finished'

Broadening his point further, Rashwinder gives the example of the Bolivian water crisis, where privatisation of water supply had led to water riots in the country in 1999-2000. “Privatisation is not a solution,” he says. “This government keeps saying farmers are misled. But we are well-informed. If you do not stay informed, this world will eat you up.”

Despite the farmers’ anxiety and anger about the new laws, at the protest site around Rashwinder and Bilawal’s langar in Shahjahanpur, there is almost an air of festivity, driven by their sense of solidarity. Some farmers are operating tractors playing loud Punjabi songs. Others are singing and dancing to parody songs about Prime Minister Narendra Modi. But, points out Bilawal, “We sing and dance to wash away our problems. The farmers here are fighting a battle.” And in that battle, adds Rashwinder, “The protestors here are only getting more and more determined with each passing day.”

About half a kilometre from the cousins’ langar , 54-year-old Gurudeep Singh is preparing rotis on a huge pan. He too ran a langar at Tikri before shifting here. He owns 40 acres Alfooke village in Mamdot tehsil of Punjab’s Firozpur district, and says the three new laws are a “death warrant” for farmers. “I cultivate rice and wheat,” he says. “MSP [minimum support price] is very important for us. Without it, we are finished.”

Gurudeep has been away from home from the day the agitation began. “I left on November 26,” he says. “I have not met my wife and kids for over a month. They do video calls with me and ask me to return home.”