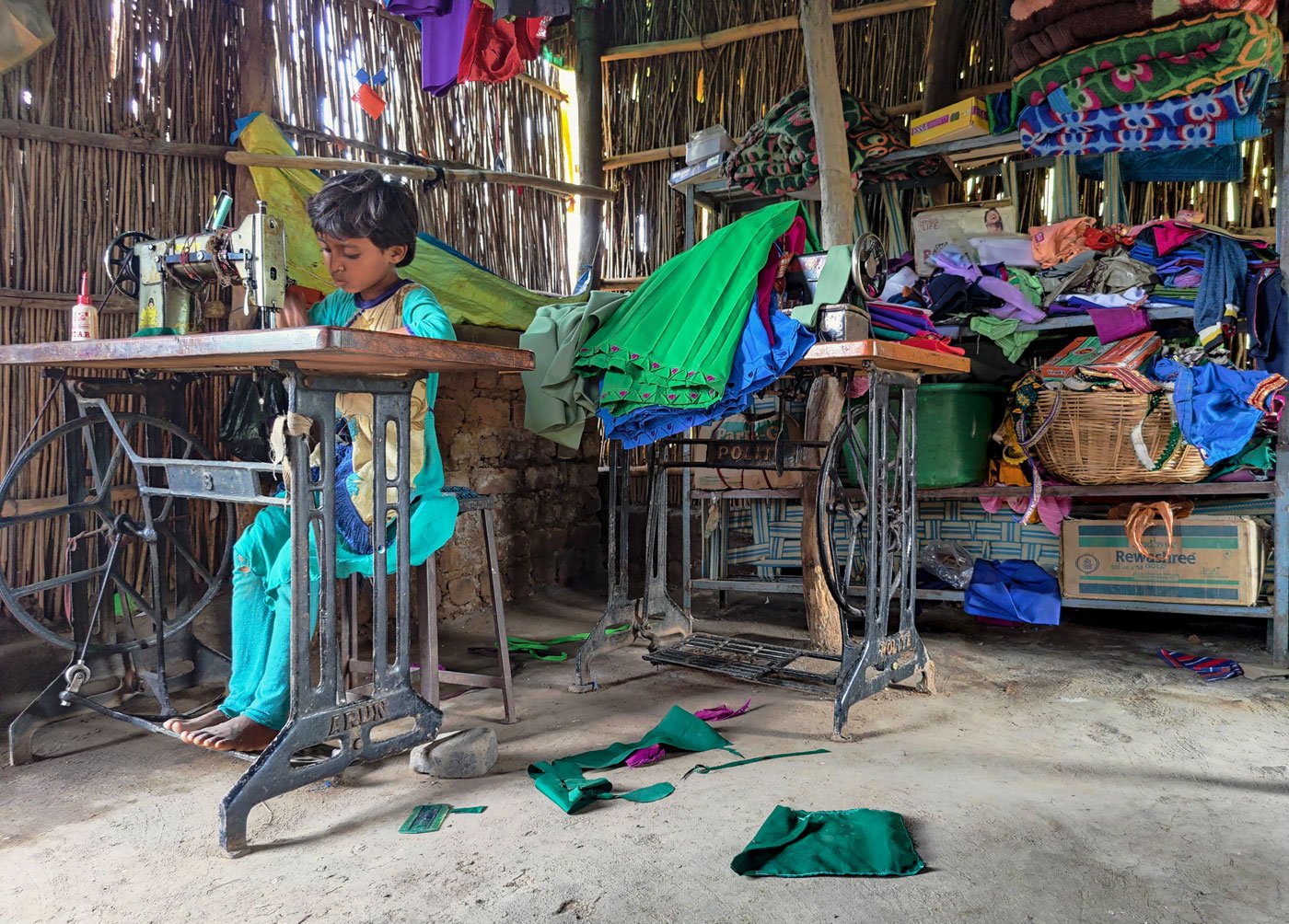 With their residential schools still closed, and online classes beyond their reach, the few skills that Adivasi children in remote villages of Maharashtra’s Nandurbar have learnt in classrooms are slipping away

Inside a thatched hut in Phalai village, amid the Satpuda hills of north-western Maharashtra, eight-year-old Sharmila Pawra is sitting at her ‘study table’ with large scissors, fabric, needles and thread.

On the table is an old sewing machine, with a garment left incomplete the previous night by her father. She takes it up, fine-tuning with each seam and pedal her already considerable stitching skills.

This table has been her learning space in her remote village in the Toranmal region of Nandurbar district ever since her residential school closed in March 2020 due to the pandemic-lockdown. “I learned to operate the machine myself by just watching Ma and Baba stitch,” she says.

What she learnt at school though, Sharmila barely remembers after an over 18-month gap.

There is no school in Phalai. Hoping to give their kids a chance at an education, in June 2019, Sharmila’s parents had enrolled her in the Atal Bihari Vajpayee International Residential School in Nandurbar town, roughly 140 kilometres from their village. The school is one of around 60 ashramshalas (special schools across Maharashtra for children from Scheduled Tribe communities) run by the zilla parishad and affiliated to the Maharashtra International Education Board. Constituted in 2018, the Board claimed to provide ‘international level’ education, designed locally and delivered in the Marathi medium. (The board has since been disbanded, and the schools now come under the state board.) 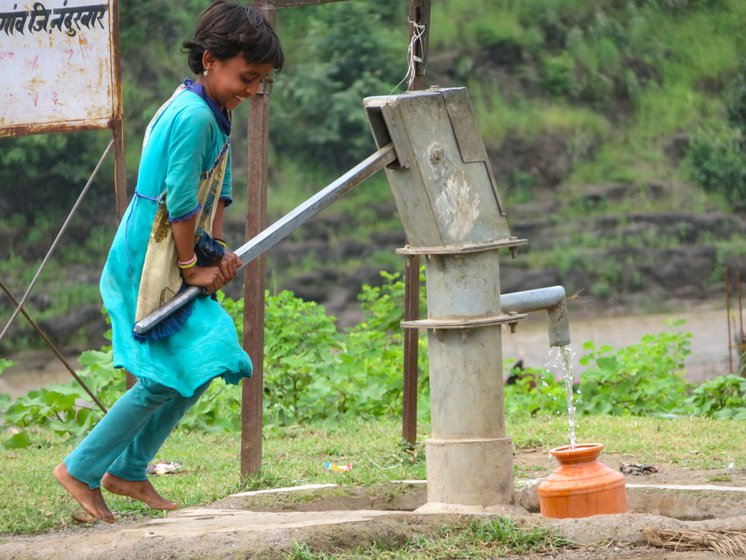 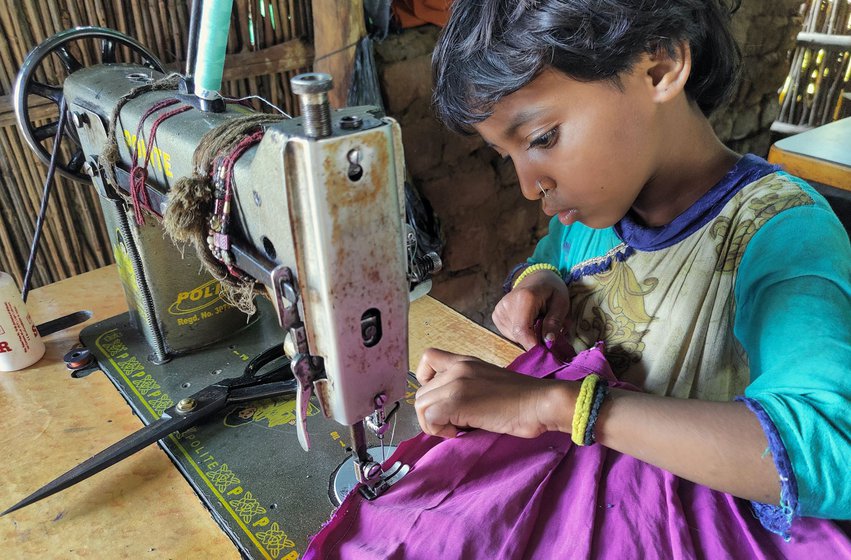 Sharmila Pawra's school days used to begin with the anthem and a prayer. At home, her timetable consists of household tasks and ‘self-study’ – her sewing ‘lessons’

But Marathi was a new language for Sharmila when she began attending school. She is from the Pawra community and speaks Pawri at home. Seeing the Marathi words in my notebook she recalls some of the alphabets that she had learnt, but tells me, in Hindi, "I don't remember them all…”

She spent barely 10 months in school. She was studying in Class 1 when the campus closed and the school’s 476 students from Akrani taluka (where her village is located) were sent back home. “I don’t know when it will start again,” she says.

Her school days used to begin with the national anthem and a morning prayer. At home, her timetable is very different: “I first fetch water from the bore [borewell outside her house]. Then look after Rinku [her one year old sister] until Ma finishes cooking. I walk with her around the place and show her things.” And whenever her parents are away from the machines, she resumes her ‘self-study’ – her sewing ‘lessons’.

Sharmila is the oldest of four siblings – her brother Rajesh is five, Urmila is three, and then there is Rinku, “She could recite poems, used to write [the Marathi alphabet],” says her father, 28-year-old Rakesh. He is now anxious about his other children’s education – Rajesh and Urmila can be enrolled only at the age of six. “If she could read and write, she could have taught her younger siblings,” he says. “ Do saal mein bachhe ki jindagi ka khel ban gaya hai . [In these two years, my child’s life has turned into a game],” he adds, watching his daughter deftly operate the sewing machine. 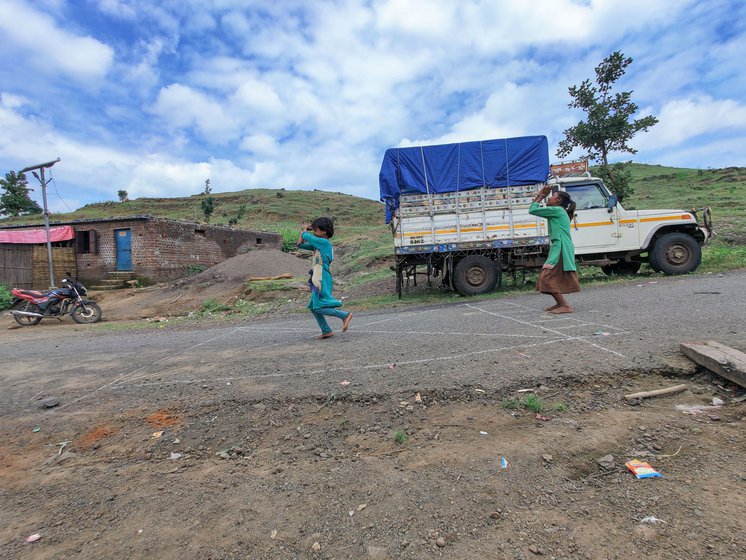 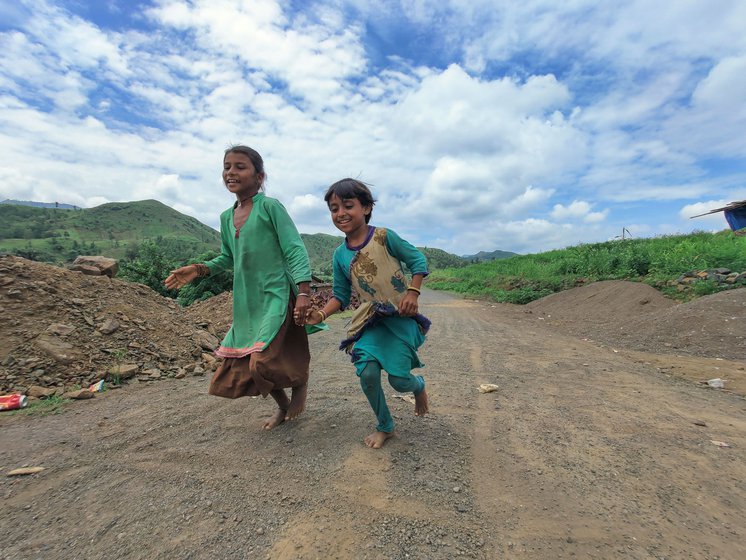 Classmates, neighbours and playmates Sunita (in green) and Sharmila (blue) have both been out of school for over 18 months

“We want her to be padha-likha [literate and educated], an afsar [officer], not tailors like us. People don’t respect if you can’t read-write.” says Sharmila’s mother, 25-year-old Sarla.

Sarla and Rakesh together earn Rs. 5,000-6,000 per month from their tailoring work. Until some years ago, Rakesh and Sarla used to migrate to Gujarat or Madhya Pradesh for wage work on farms. “After Sharmila’s birth we stopped because she often fell sick [when we took her along during the migration months],” he says, “and also because we wanted to send her to school.”

As a youth, he had learnt tailoring from his uncle Gulab, who lived in the same village (and passed away in 2019). With his help Rakesh bought the sewing machines and started training Sarla too.

“We didn’t have any farmland, so we bought two second-hand machines for 15,000 rupees in 2012,” says Sarla. For this, they spent their entire savings and some money they had received from Rakesh’s parents, saved from their lifetime of work as agricultural labourers. Their uncle Gulab helped divert some of his own clients to Rakesh and Sarla.

“We don’t have a ration card; 3,000-4,000 rupees go towards buying rations only,” says Rakesh. Sarla lists out the items they need – wheat flour and rice, dal , salt, chilli powder… “They are growing kids, can’t compromise on their khana-peena [diet],” she says. 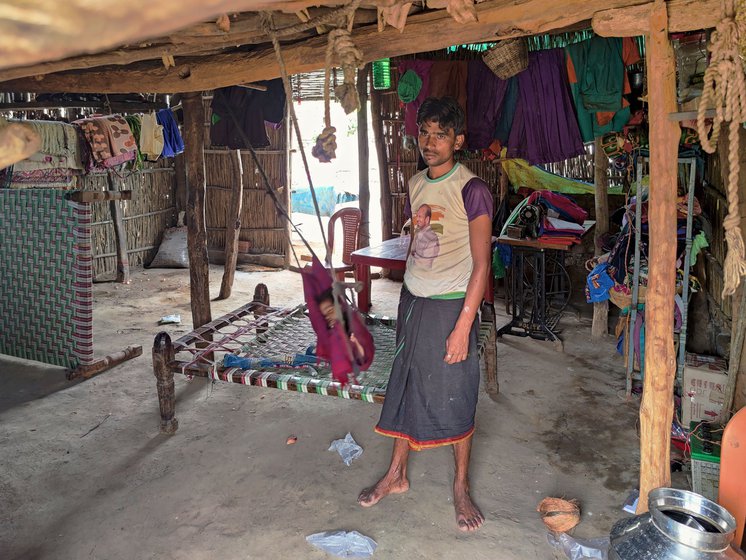 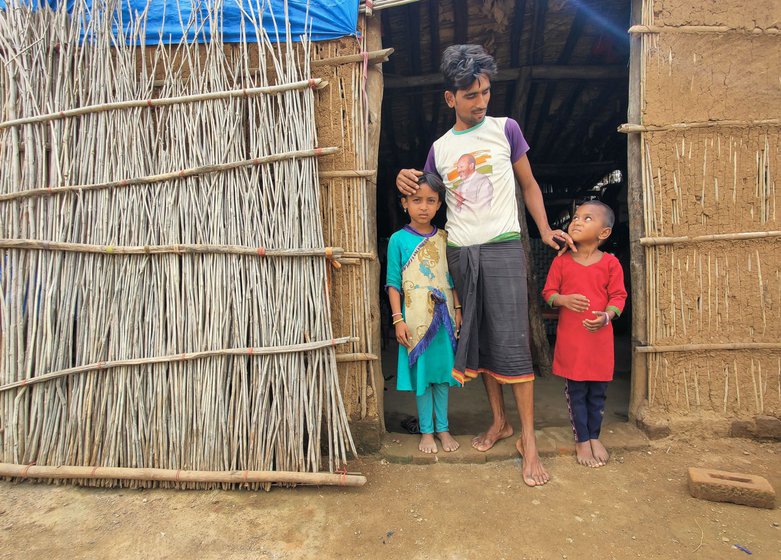 'If she could read and write, she could have taught her younger siblings. In these two years, my child’s life has turned into a game', Rakesh says

Saving money for their children’s education is impossible and they are grateful for the ashramshalas . “There at least children study and get to eat as well,” says Sarla. But the campus remains closed for Classes 1 to 7.

Online education is an alien notion in the remote Akrani taluka . Of the ashramshala’ s 476 students, teachers have not been able to contact 190 – including Sharmila – and those students remain completely disconnected from formal education

“More than 90 per cent of parents don’t even have a simple handset,” says Suresh Padavi, 44, a Nandurbar-based teacher at the ashramshalas . He is among the school’s nine teachers who have been visiting villages in Akrani to track down the students and provide them with lessons since the beginning of the pandemic.

“We come here for three days [a week], spend the nights at one of the houses in the village,” says Suresh. During each visit the teachers manage to gather 10 to 12 children from Classes 1 to 10. “One child may be from Class 1, another from Class 7. But we have to teach [them all together],” he says.

His team of teachers, however, has not reached Sharmila. “Many kids stay in faraway and interior locations with no phone or road connectivity. It is difficult to locate them,” says Suresh. 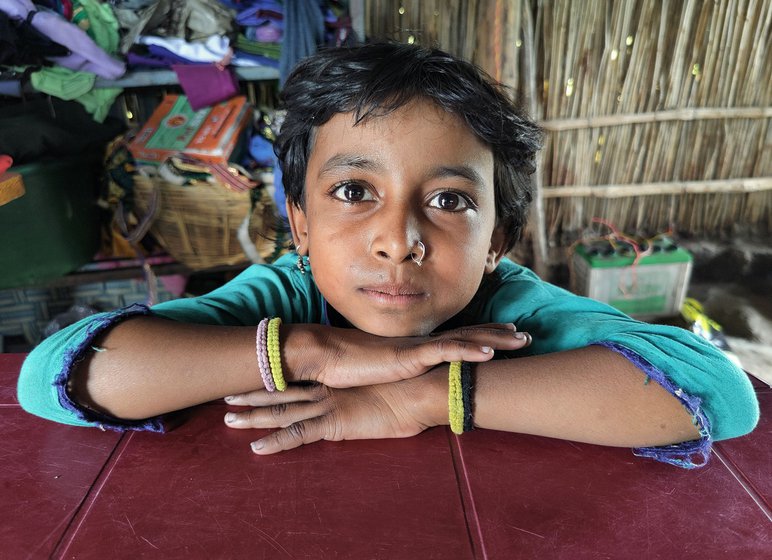 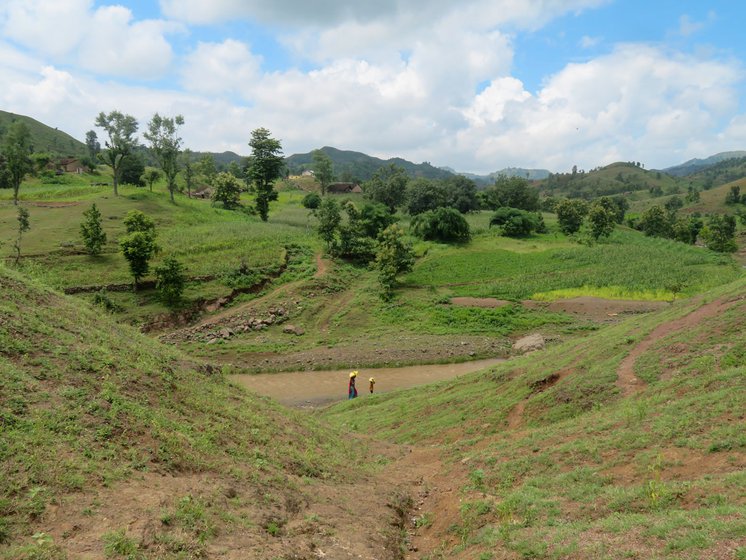 Reaching Sharmila’s house in the remote Phalai village is difficult; it involves an uphill walk and crossing a stream

Reaching Sharmila’s house in Phalai is difficult. The shortest way involves an uphill walk and crossing a stream, while the other route is a muddy road that takes longer “Our house is in the interiors,” says Rakesh. “Teachers have never come this side.”

This has meant that many other students like Sharmila have been completely disconnected from an education since schools closed. A January 2021 study notes that due to the pandemic-driven closure of schools, as many as that 92 per cent of children have lost at least one ability – to describe a picture or their experiences orally; reading familiar words; reading with comprehension; or writing simple sentences based on a picture from previous years.

“I had learnt to write my name, with pencil, in school,” says eight-year-old Sunita Pawra, Sharmila’s neighbour and playmate, who studied in the same school in Class 1 until it closed last year.

“I used to wear this dress in school. I wear it sometimes at home,” she says, excitedly pointing to her uniform hanging from the clothesline outside her mud house. “ Bai [teacher] used to show fruits from a book [picture book]. Colourful fruits. It was red. I don’t know the name,” she says trying hard to remember. School for her has become a bunch of fading memories. 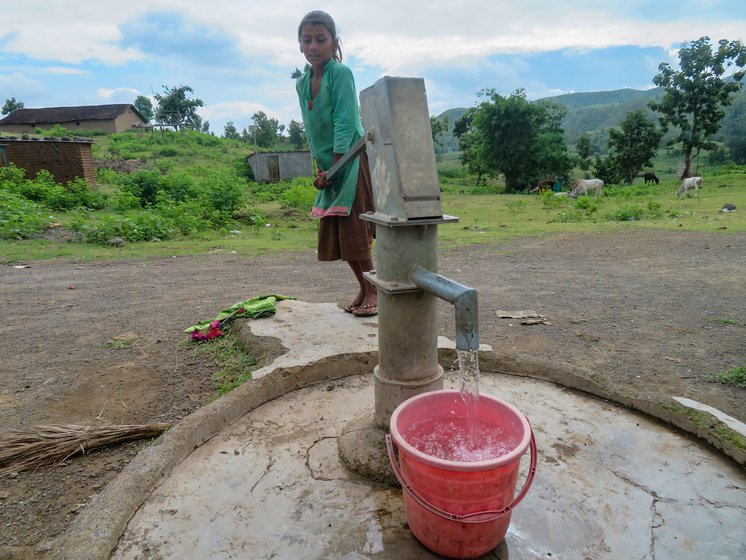 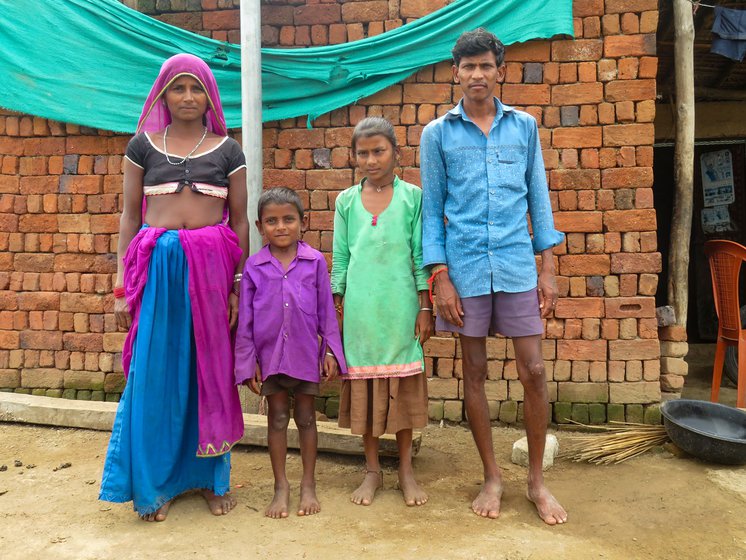 Every year, Sunita's parents Geeta and Bhakiram migrate for work, and say, 'If we take the kids with us, they will remain unpadh like us'

Sunita doesn’t write or draw in her notebook anymore, but she does draw with a white stone a few squares on the tar road near her house, preparing for a game of hopscotch with Sharmila. She has three siblings – Dilip is six, Amita is five, and Deepak is four. At eight, Sunita is the oldest, and the only one in school, though her parents hope to eventually enrol their other kids too.

Her parents Geeta and Bhakiram farm during the monsoons on one acre of steep slopes, and get 2 to 3 quintals of jowar for the family's meals. “Sustaining only on this impossible. We go outside for work,” says 35-year-old Geeta.

Every year they migrate after the October harvest to Gujarat and work on cotton fields for a daily wage of Rs. 200 to Rs. 300 each, for roughly 200 days a year until April-May. “If we take the kids with us, they will remain unpadh like us. Where we go there isn’t any school,” says 42-year-old Bhakiram.

“In ashramshalas the children and stay and study as well,” says Geeta. “The government should reopen these schools.” 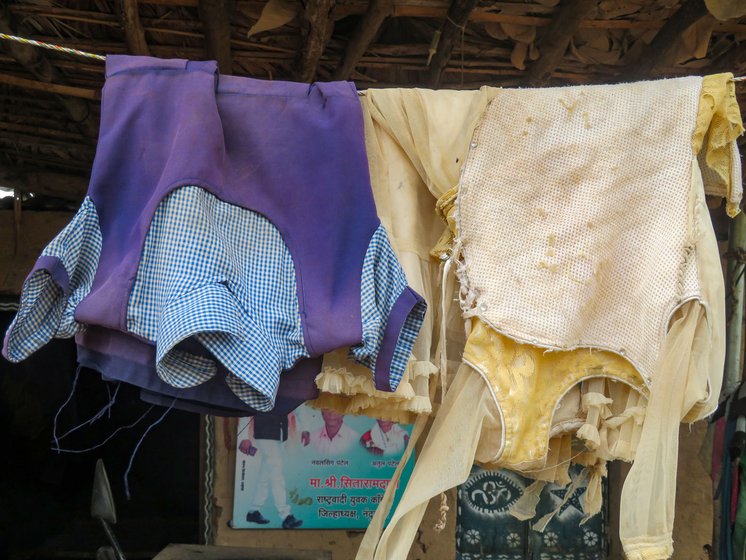 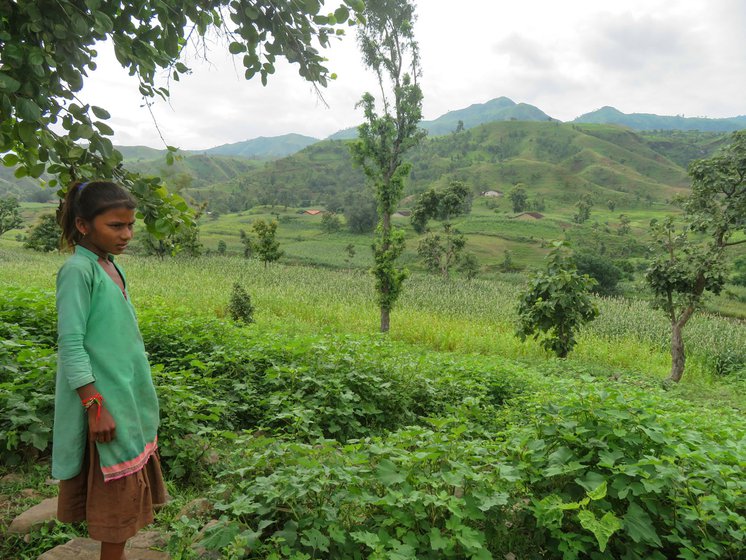 'I used to wear this dress in school. I wear it sometimes at home', says Sunita, for whom her time at school is now a bunch of fading memories

A government resolution of July 15, 2021, notes: “Government aided residential and Eklavya Model residential schools in the state have been allowed to open only for class 8 to 12 from 2nd August 2021 in Covid-free area.”

“There are some 139-government residential schools in Nandurbar with 22,000 students,” estimates Ganesh Paradke, a member of the Nandurbar Zilla Parishad. A large number of the students in these schools are from the hilly and forested Akrani taluka . Now though, he adds, “Many have lost interest in studies and the girls are mostly married off.”

Around 40 kilometres from Sharmila’s house, near Sindidigar village in Akrani taluka, 12-year-old Rahidas Pawra and his two friends are grazing the 12 goats and five cows that their families own. “We stop here for a while. We like it here. You can see all the hills, villages, sky…everything from here,” says Rahidas, who would have been inside a classroom studying History or Maths or Geography or other subjects in Class 6 if his school, Kai D. J. Kokani Aadivasi Chhatralaya Shravani in Navapur taluka – around 150 kms away – had not closed last year.

Rahidas’ father Pyane, 36, and mother Sheela, 32, cultivate maize and jowar on their two acres during the monsoons. “My elder brother Ramdas helps them on the farm,” says Rahidas. 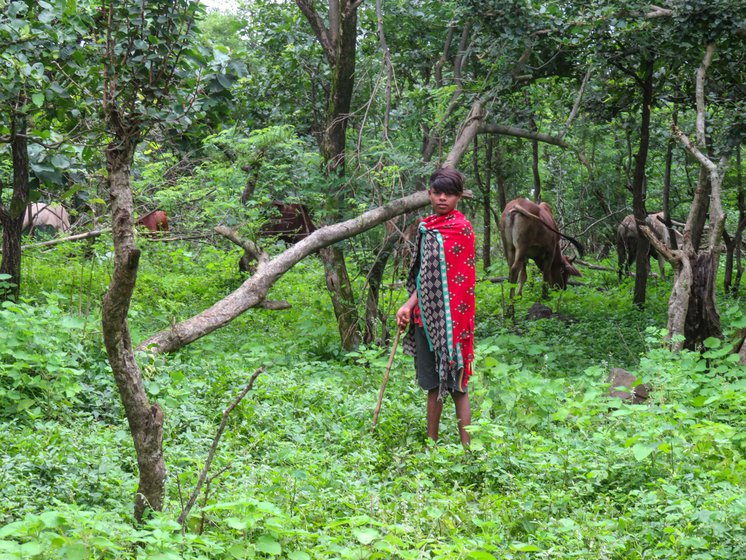 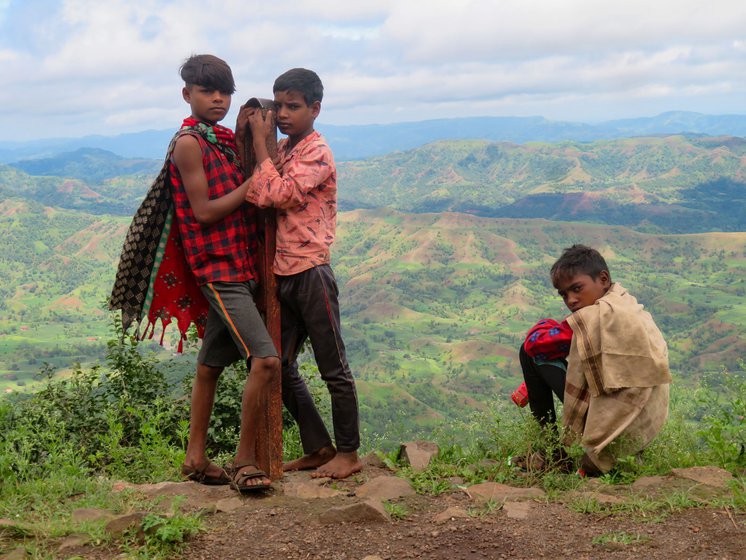 Rahidas Pawra and his friends takes the cattle out to graze every day since the school closed. 'I don’t feel like going back to school', he says.

After the annual harvest, Pyane, Sheela and 19-year-old Ramdas – who studied till Class 4 – migrate to Navsari district in neighbouring Gujarat to work on sugarcane farms. They each earn a daily wage of Rs. 250 from December to May, for roughly 180 days a year.

“Last year they didn’t go fearing corona. But this year I am also going with them,” Rahidas says. The family’s animals are not a source of income; the goats’ milk is consumed at home. At times, they sell one of the goats to the local butcher for anything between Rs. 5,000 and Rs. 10,000 depending on the animal’s size and health. But this is rare, and resorted to only when in great need of money.

The three friends grazing the animals are in the same school and class. “I used to take our cattle grazing earlier too [before the pandemic], whenever I came home during summer and Diwali vacations,” says Rahidas. “It’s nothing new.”

What is new is the dip in his morale. “I don’t feel like going back to school,” he says. News of the possibility of their school reopening does not excite any of them. “I don’t even remember anything,” Rahidas adds. “And what if they shut it again?”