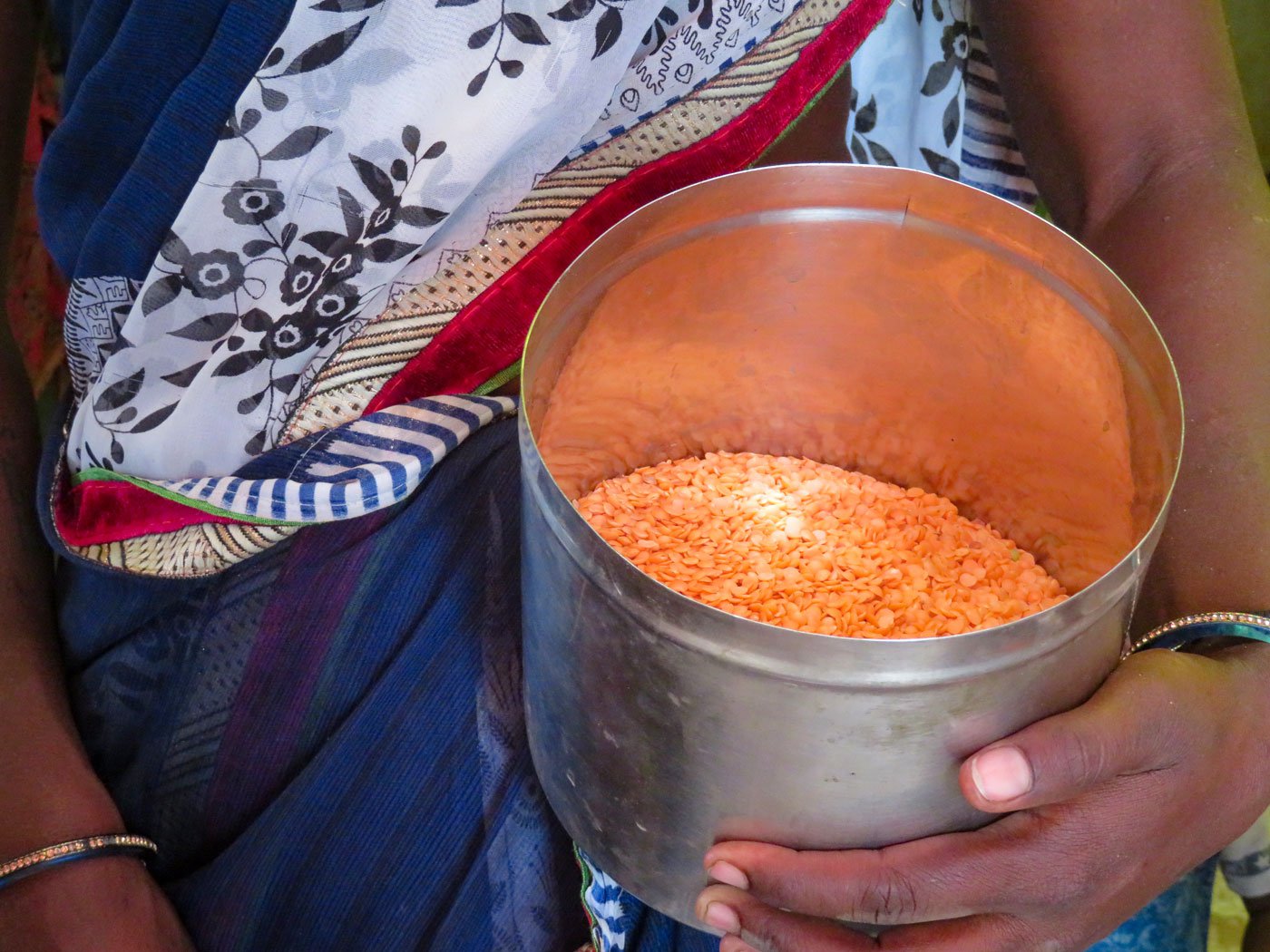 For Maharashtra's Masanjogi and Pardhi nomadic communities, a steep income drop during the lockdowns has meant cutting back on food – and without ration cards, they cannot even access subsidised grains

Maya is scraping the last grains of rice from an old aluminium vessel in the afternoon. It will be her only meal of the day. There is no masoor dal left in the kadhai for her and Shiva.

“We eat only one time, but cook twice for our children. We first make sure they get to eat enough,” says 23-year-old Maya. “We have been buying less ration since the mahamari began,” says 25-year-old Shiva, sitting outside their bamboo hut, its walls and roof covered with old sarees and sheets.

Since the pandemic-lockdowns began in March 2020, Maya and Shiva Gandade have been struggling to feed themselves and their four children, ages ranging from 2 to 7.

Their makeshift hut on an open ground is about 6 to 7 kilometres from Pandharyachiwadi, the village nearest to their settlement in Beed taluka of Beed district. When it rains, water trickles in through the colourful porous walls and roof.

The 14 huts in the field are home to families from the Masanjogi community, a nomadic tribe (listed as an OBC in Maharashtra) who were traditionally alms-seekers. The families all move together from one district to another in the state, usually once a year, in search of work and wages. 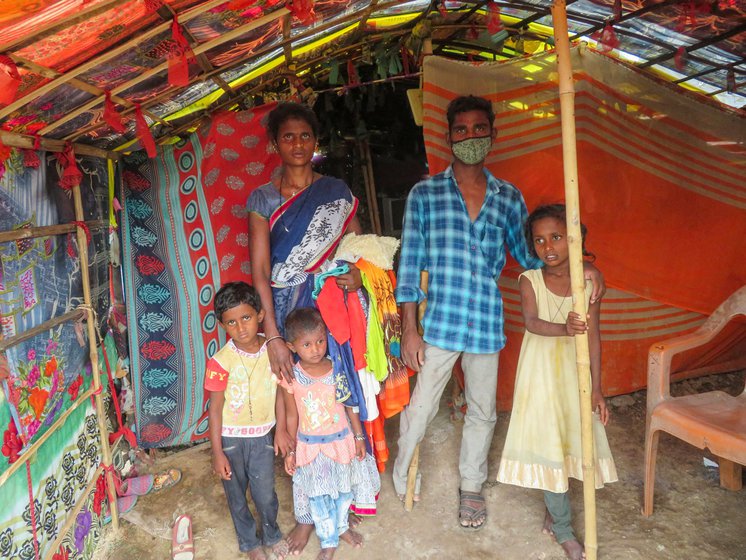 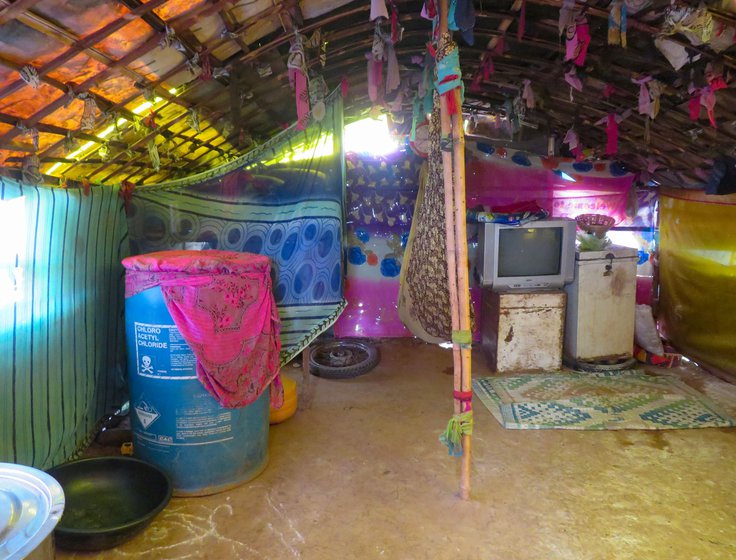 Since the lockdowns began, Maya and Shiva Gandade, who live in a cluster of huts of the Masanjogi community in Beed district, have been struggling to feed themselves and their four little children

Many of them now work as waste-collectors. The women usually collect hair and old clothes from various villages for recycling, and the men gather plastic, iron and aluminium scrap from garbage bins and households. “The scrap dealer pays us according to how much we collect in a day,” says Maya, who also exchanges plastic tubs and buckets for the hair and clothes.

“When we would stop earning at one place we moved to another taluka ,” she adds. “We don’t stay in one place for more than a year.”

But their migrations came to a halt with the travel restrictions related to Covid-19, and few remaining transportation options. “We are in Beed since November 2019. It is difficult to hire a tempo because we don’t have enough money. And travelling in ST [state transport] buses with all our luggage is impossible,” says Shiva, who walks with the help of a cane because of a past bout of polio.

“Our earnings depend on how much scrap, old clothes and hair we collect,” he adds. While even before the pandemic there were days when he and Maya earned nearly nothing, their combined monthly income was never less than Rs. 7,000-8,000.

The shortfall has meant cutting down on rations and food. Earlier, Maya and Shiva say,  Rs. 4,000 to Rs. 5,000 a month is what they would usually spend only on food every month for their family of six. 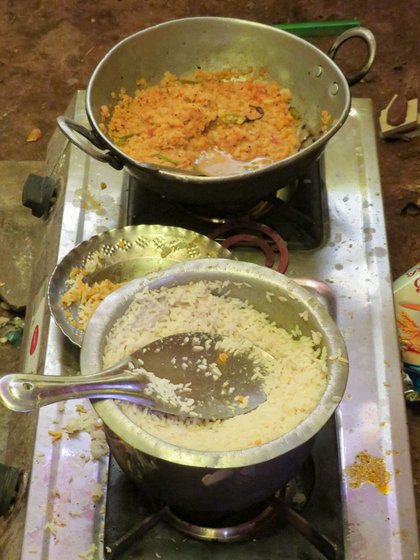 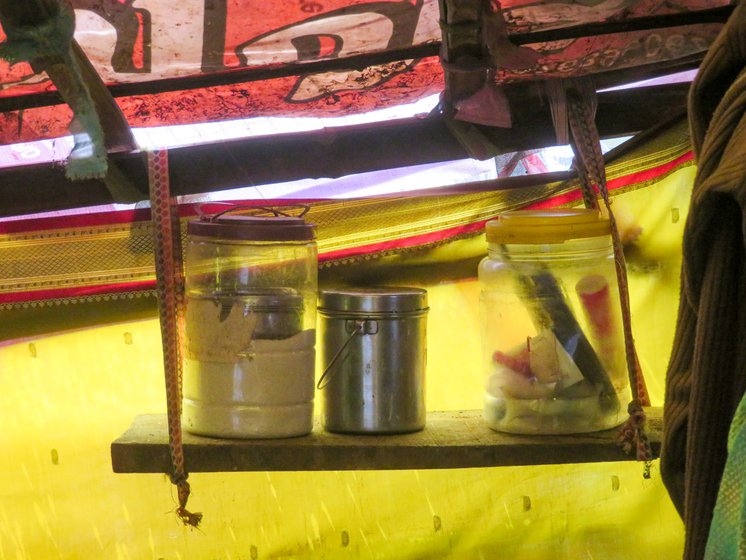 Now, their pre-pandemic weekly purchase of foodgrains – two kilos of various dals and 8 to 10 kilos of rice – has dropped to just one kilo of the cheaper masoor dal and two kilos of rice every week. “In addition, we used to have chicken or mutton, sometimes eggs, vegetables, fruits for the kids, at least three times a month,” says Maya, counting on her fingers. But since the lockdowns the quantity and quality of what they eat has dropped. “It is not as if we used to have a feast earlier, but at least we had enough to fill our stomachs,” says Maya.

“Now everything, from oil to dal, has become costly. How do we afford all this? We don’t even earn like before,” adds Shiva.

However, even a decade before the pandemic began, the food expenditure for many in India was already declining – from 63.2 per cent in 1993 down to 48.6 per cent, notes the National Sample Survey Office's Household Consumer Expenditure Survey of 2011-12. (The results of the next round of the five-yearly survey have not been released by the Ministry of Statistics & Programme Implementation.)

Since the pandemic began, hunger has further surged among socially and economically marginalised communities in the country, notes a study done by the Rapid Rural Community Response to Covid-19, a Delhi-based coalition engaged in, among other activities, provision of rations. For the period from December 12, 2020 to January 5, 2021, it states that “40% of the population [the sample size was nearly 11,800 people across 11 states] cutdown on food consumption” and 25 per cent subsequently continued to curtail items such as egg, meat, vegetables and oil. 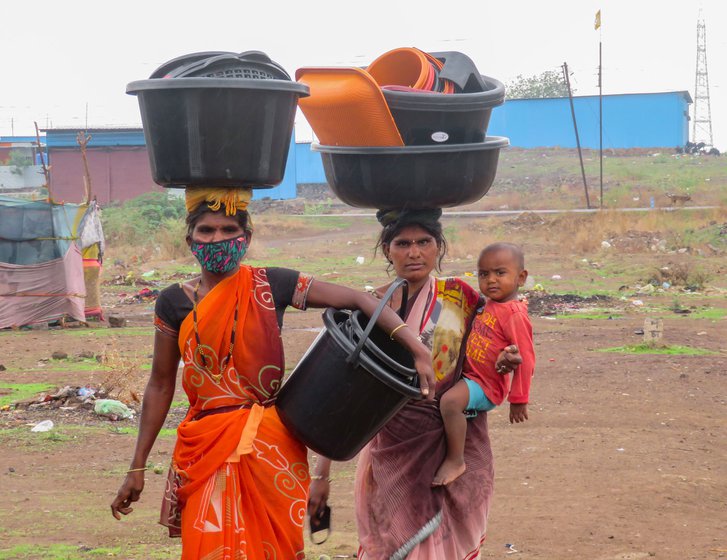 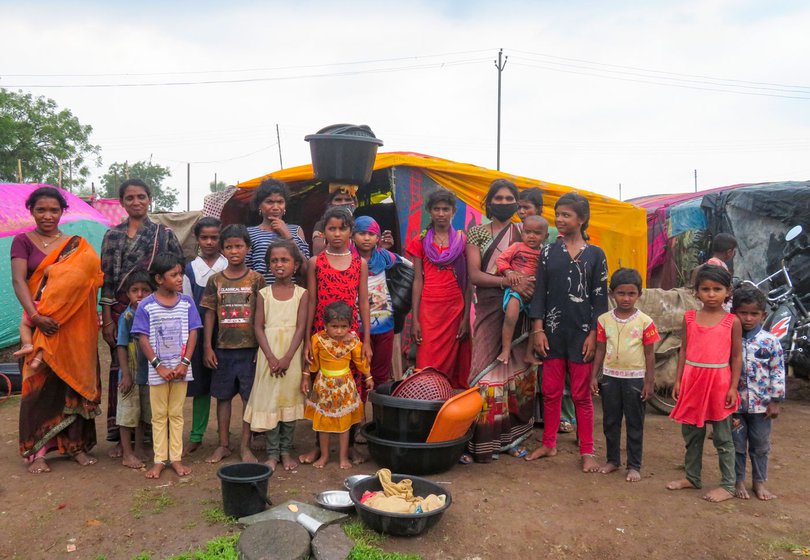 Many Masanjogis now work as waste-collectors, at times exchanging plastic tubs and buckets for the items they pick up from households

Possessing a ration card would have helped Maya and Shiva to some extent. The National Food Security Act, 2013 , entitles households to purchase a total of five kilograms of grains per individual per month at a subsidised rate – rice at Rs. 3 a kilo, wheat at Rs. 2 per kilo and coarse cereals at Rs. 1 a kilo – provided the family has a ration card.

“We don’t have a ration card," says Maya, "because we never stay at one place for long." So her family and the 14 other households in her settlement cannot even access government schemes like the additional free 5 kilos of foodgrains during the pandemic under the Pradhan Mantri Garib Kalyan Anna Yojana.

“We are seeing widespread hunger. This time, with the second wave, the situation of hunger is worse,” says Dipa Sinha, a Delhi-based member of the Right to Food Campaign. “A large number of people don’t have ration cards and the government is not making any arrangements for them despite the Supreme Court’s repeated orders.”

“More than 50 per cent of people from our community [Masanjogi] don’t have a ration card or any other identity proof,” says 48-year-old Laxman Ghansarwad, a Nanded-based community worker who runs the Masanjogi Mahasangh, which works on education, access to various types of documentation, and other issues. He estimates the total population of Masanjogis at nearly 1 lakh in Maharashtra, with 80 per cent of them engaged in collecting scrap and moving from place to place. 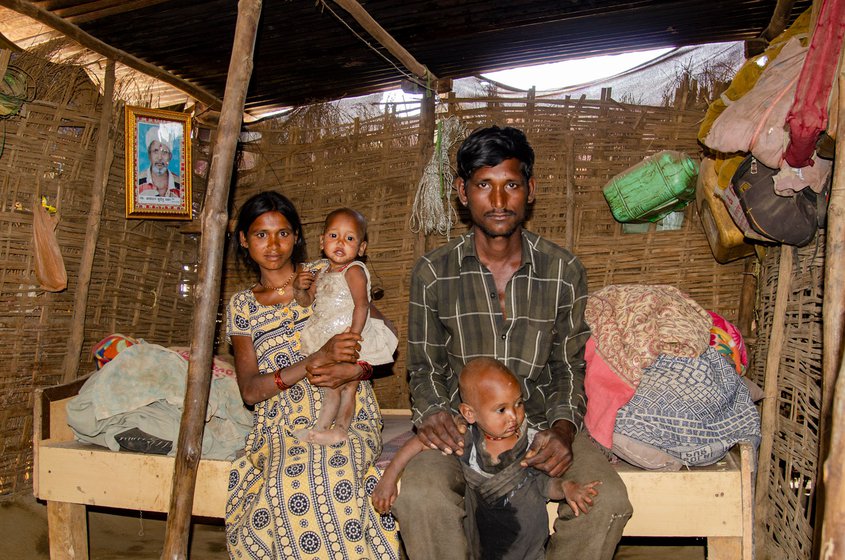 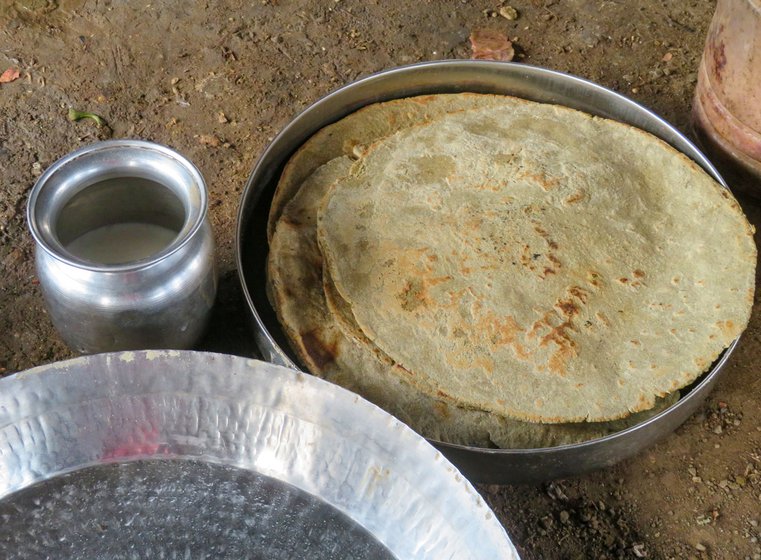 For Naresh and Suvarna Pawar, and their kids in Yavatmal (they belongs to the Phanse Pardhi community), bajri bhakris have become a rare meal item

Other itinerant communities are in a similar predicament too, among them Suvarna and Naresh Pawar, who live in Ner taluka of Yavatmal district with their five-year-old son and four-year-old daughter, who I had met in May 2019 (and spoke to on the phone for this story). They belong to the Phanse Pardhi nomadic community (listed as a Scheduled Tribe), and are among 35 families in a settlement of 70 thatched huts who don’t possess ration cards.

Suvarna, 26, goes to nearby villages every morning along with her little daughter to beg. “I call out at every doorstep… But begging isn’t easy now,” she says, “because villagers fear getting corona infection. Many don’t allow us inside the village. A few who take pity on us give some rice grains and sometimes leftover bhakri .” (See Pardhis in lockdown – begging the question )

While Suvarna wanders around looking for food, her husband Naresh, 28, and a few other men from the settlement go hunting for t eetar (partridge) in nearby forest areas. The birds are eaten or sold by the families. “Hunting is not allowed. Many times forestwale [forest officials] warn us. We often return empty hand,” says Naresh.

At the end of a long day, their meals usually consist of a little rice collected from different households and chilli powder or black sesame chutney. Very rarely, they have some vegetables. “Some farmers give us brinjal or potato if we ask,” says Suvarna. 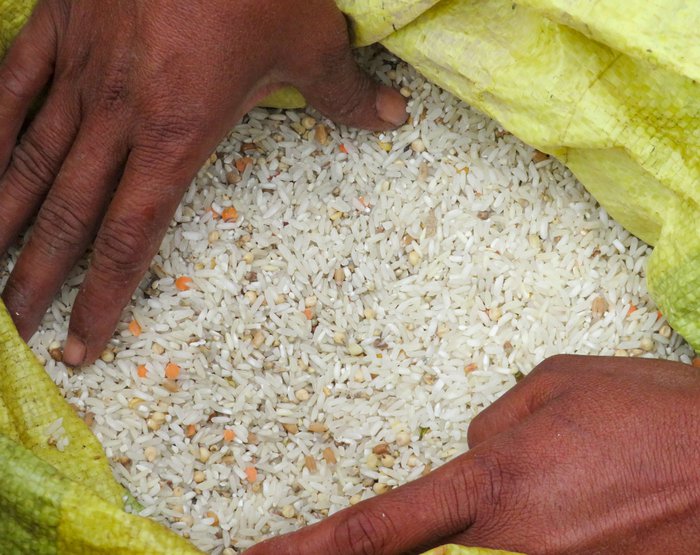 Suvarna begs for food now, and says: 'A few who take pity on us give some rice grains, and sometimes leftover bhakri '

Even a decade before the pandemic began, the food expenditure for many in India was already declining – from 63.2 per cent in 1993 down to 48.6 per cent notes the National Sample Survey’s Household Consumer Expenditure Survey of 2011-12

The problems in acquiring identification documents that would allow her family and others to access government schemes have been outlined in several petitions received by the National Commission For Denotified, Nomadic And Semi-Nomadic Tribes. A 2017 report of the commission states: “Out of the total 454 petitions received regarding the issue of identification and documentation, 304 related to problems in getting various other documents like Death certificate, BPL [ration] cards and Aadhar cards.”

The pandemic has made their condition even more precarious.

The central government issued a circular on June 2, 2021, drawing the states’ attention to the “‘vulnerable and weakest sections of the society i.e. street dwellers, rag pickers, hawkers, rickshaw pullers, migrant labours etc., who are in dire need of food grains… unable to procure ration cards.”

In states like Maharashtra, the government had already introduced the Shiv Bhojan Yojana on January 26, 2020, to make available cooked meals for Rs. 10 to anyone without any kind of documentation. The cost of this meal was further reduced to Rs. 5 per plate during the pandemic. The Economic Survey of Maharashtra 2020-21 claims that “since inception 2.81 crore Shivbhojan thalis have been distributed through 906 Shivbhojan centres up to December 2020.”

But these meals have not reached the families in Shiva’s and Naresh’s settlements. “We don’t know about this,” says Shiva. “If we knew about it, we would not have remained half hungry,” adds Naresh. 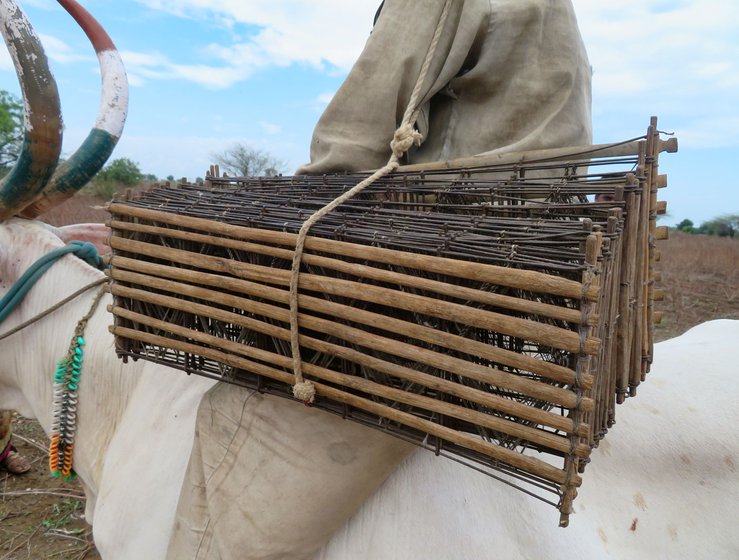 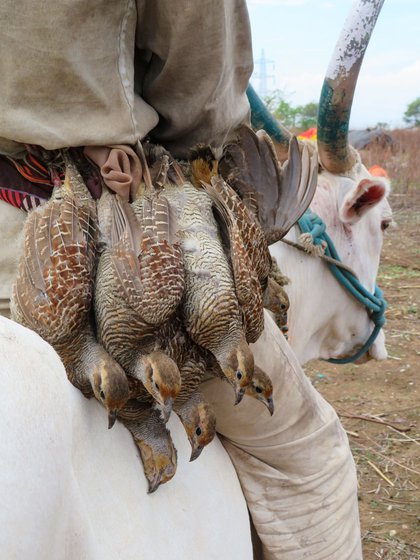 Naresh and other men from the settlement go hunting for teetar (partridge) in nearby forest areas. The birds are eaten or sold by the families

“This becomes a state verses centre issue, and as a result people are falling between the cracks. Some states are trying different things, but we are not seeing any central national scheme,” says the Right to Food Campaign’s Dipa Sinha.

“We would do any work – digging, road construction, cleaning gutters, selling flowers,” recounts Naresh, in cities like Mumbai, Nagpur and Pune for six months of the year from December to May. They would sleep under flyovers or in temporary huts, and were able to save a total of around Rs. 30,000 to Rs. 35,000 after six months of hard labour.

This money took care of their monthly expenses on grains, oil and vegetables during the other half of the year. “That used to be our big income. We could buy, every month, 15-20 kilos rice, 15 kilos bajra , 2-3 kilos moong [from the open market],” says Naresh.

Then the balancing act of their annual finances went completely askew with the pandemic. The lockdowns have restricted their seasonal migration and forced them to rely on begging and hunting. “Government announces lockdown anytime and we don’t want to get stuck in the city, it is better to be at home even if we are starving,” Naresh says. “It is very hard to find work in nearby villages. By labouring in the cities, our days were improving, but now...nothing remains."