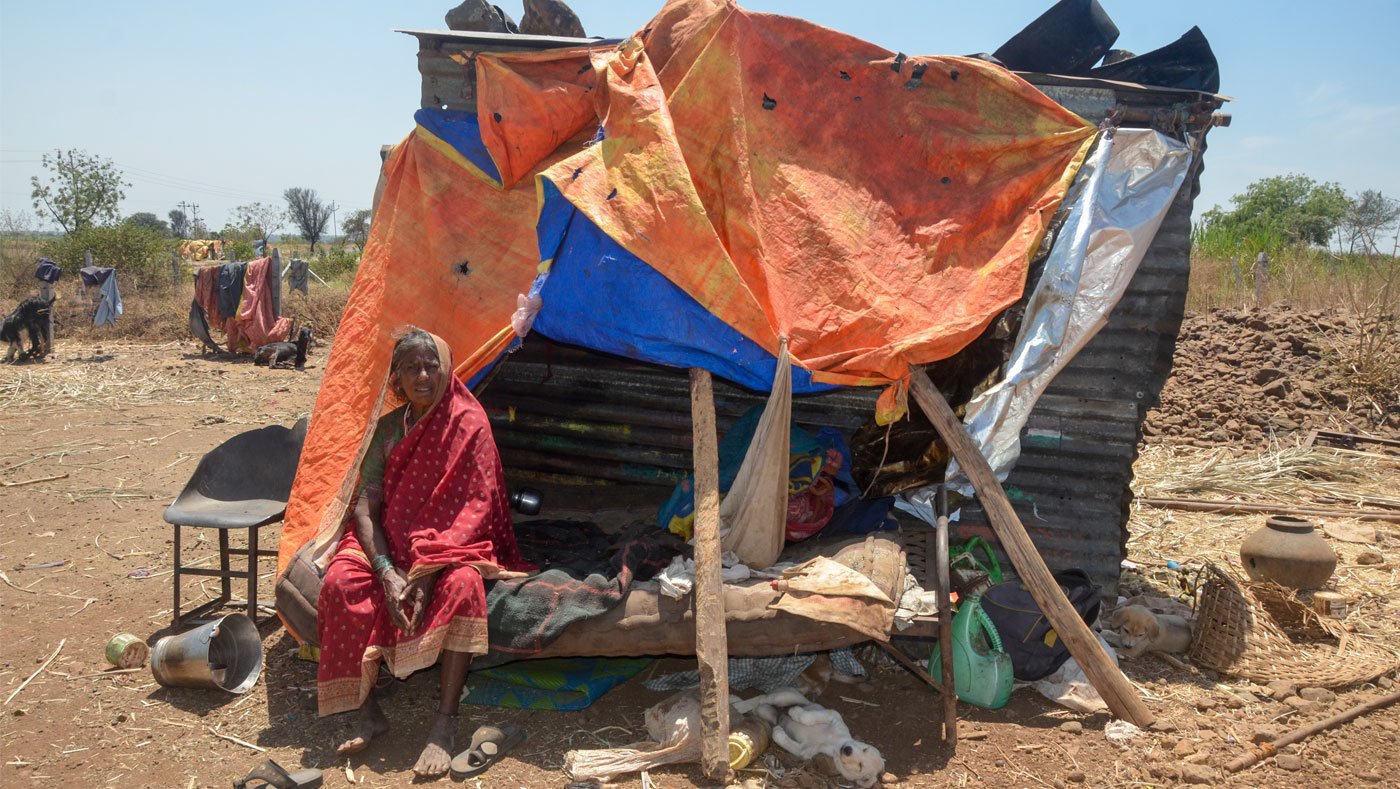 Pardhis in lockdown – begging the question

Some Phanse Pardhi Adivasis in rural Maharashtra, especially older ones in their late 70s, depend on begging to be able to eat at all. What happens now, when they cannot enter the villages that feed them?

“Villagers are just shouting at us not to approach their doorstep. They say some bimari [disease] has come. Nobody tells us what that bimari is. I do not have any disease. Why are they stopping me?”

It’s a week since Geetabai Kale, a Phanse Pardhi Adivasi, has got any food. Because the only way the hungry 78-year-old gets any, even in normal times, is by begging. A source that has dried up in the lockdown. She hasn’t a clue what Covid-19 is about, but she and other Pardhis are experiencing its fallout daily – in empty stomachs.

The last meal she remembers given to her was stale bajra bhakri on March 25. “Some boys – unknown to me – had come on itwar [Sunday, March 22] and gave me four bhakris . I ate them over four days.” She has been suppressing her hunger since. “Nobody came here after that and the villagers are not allowing me to enter as well.”

Geetabai stays alone in a tin shed near the main road in Shirur, in Maharashtra's Pune district, and goes to beg at Chavhanwadi village, two kilometres away. “We used to eat whatever leftover food people gave us,” she says. “I have heard someone saying the government is giving out free foodgrains – but only to those who have ration cards. I don’t have one.”

The Phanse Pardhis, listed as a Scheduled Tribe, are the worst-off among the anyway poor and deprived Pardhi Adivasi groups. The Pardhis continue to bear the burden and legacy of barbaric colonial legislation – more than 70 years after Independence. In 1871, to punish and quell many Adivasi and pastoral nomadic groups who rebelled and challenged their suzerainty, the British enforced the Criminal Tribes Act, declaring nearly 200 communities ‘criminal’ – by birth. The consequences for these groups were devastating, and also isolated them from the rest of society.

Independent India repealed the Act in 1952, and the list of ‘criminal tribes’ was ‘denotified.’ But the stigma, prejudices and torment by the rest of society strongly endures. It is impossible for many of these communities to enter the main village or draw water from its wells. They mostly live 2-3 kilometres away from it. They do not find jobs, their educational levels are abysmal, many are jailed, charged with petty offences. And several have no option but to beg for a living. 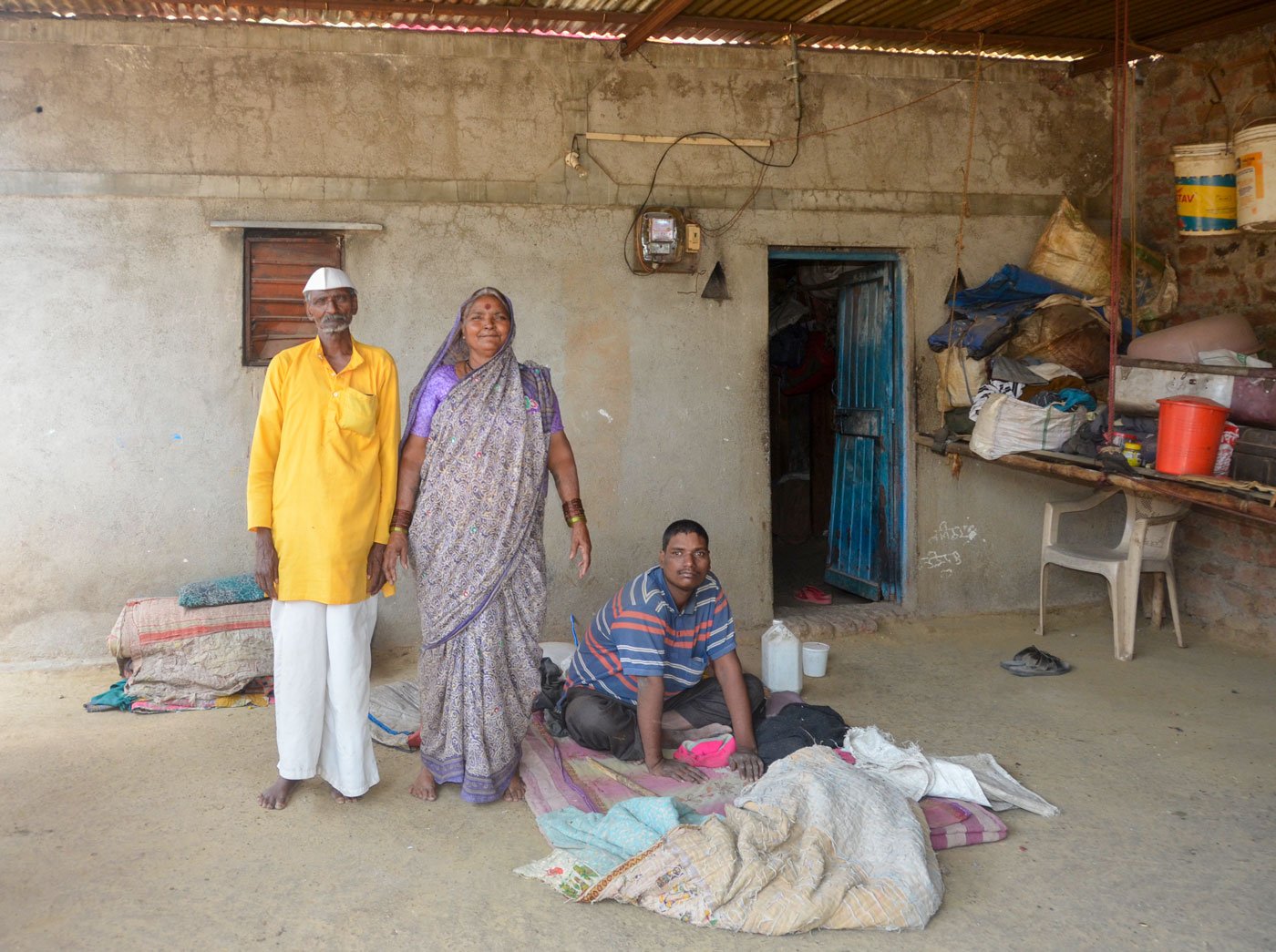 Shantabai and Dhulya Kale with their son Sandeep, at their one-room home on the outskirts of Karade village (file photo)

Geetabai is one of those with no options. So is Shantabai, 75, living in a one-room semi- pucca structure on the outskirts of Karade village in Pune district’s Shirur taluka . Also a Phanse Pardhi, her home is about four kilometres from Geetabai’s. Begging for food in Karade has been the only source of sustenance for Shantabai, her husband and their 44-year-old son Sandeep, incapacitated after a road accident in 2010.

Both Geetabai’s sons, Santosh, 45 and Manoj, 50, are sanitation workers living in Pimpri-Chinchwad – 77 kilometres away. She hasn’t heard from them. “My sons didn’t come to see me. They used to come once a month at least.” The statewide curfew of March 23 and the total lockdown announced by Prime Minister Narendra Modi on March 24 thwarted all her efforts at getting herself some food. Hunger drove her to try again on March 28 at Chavhanwadi, but she was rebuffed.

Shantabai met similar rejection at Karade. Countless other Pardhi families are likewise trapped. The Phanse Pardhis find that Covid-19 has put an end to begging as well.

“Villagers are just shouting at us to not to come to their doorstep. I need to feed my son at least.” Sandeep is paralysed from the waist downwards. “If we don’t get food from begging, what will eat?” Shantabai Kale asked me on the phone. “My son is bedridden.”

She and her husband Dhulya, 79, do all his daily chores and take care of him. “He was in Aundh Government Hospital for three years. The doctor there said his brain nerves are damaged so he can’t move his body,” Shantabai had told me in March 2018 at her one-room house. Sandeep had studied till Class 4 and, before his accident, did any odd jobs that came along: sweeping, road-digging, loading and unloading goods on trucks, washing and cleaning plates and dishes at hotels in Pune city. 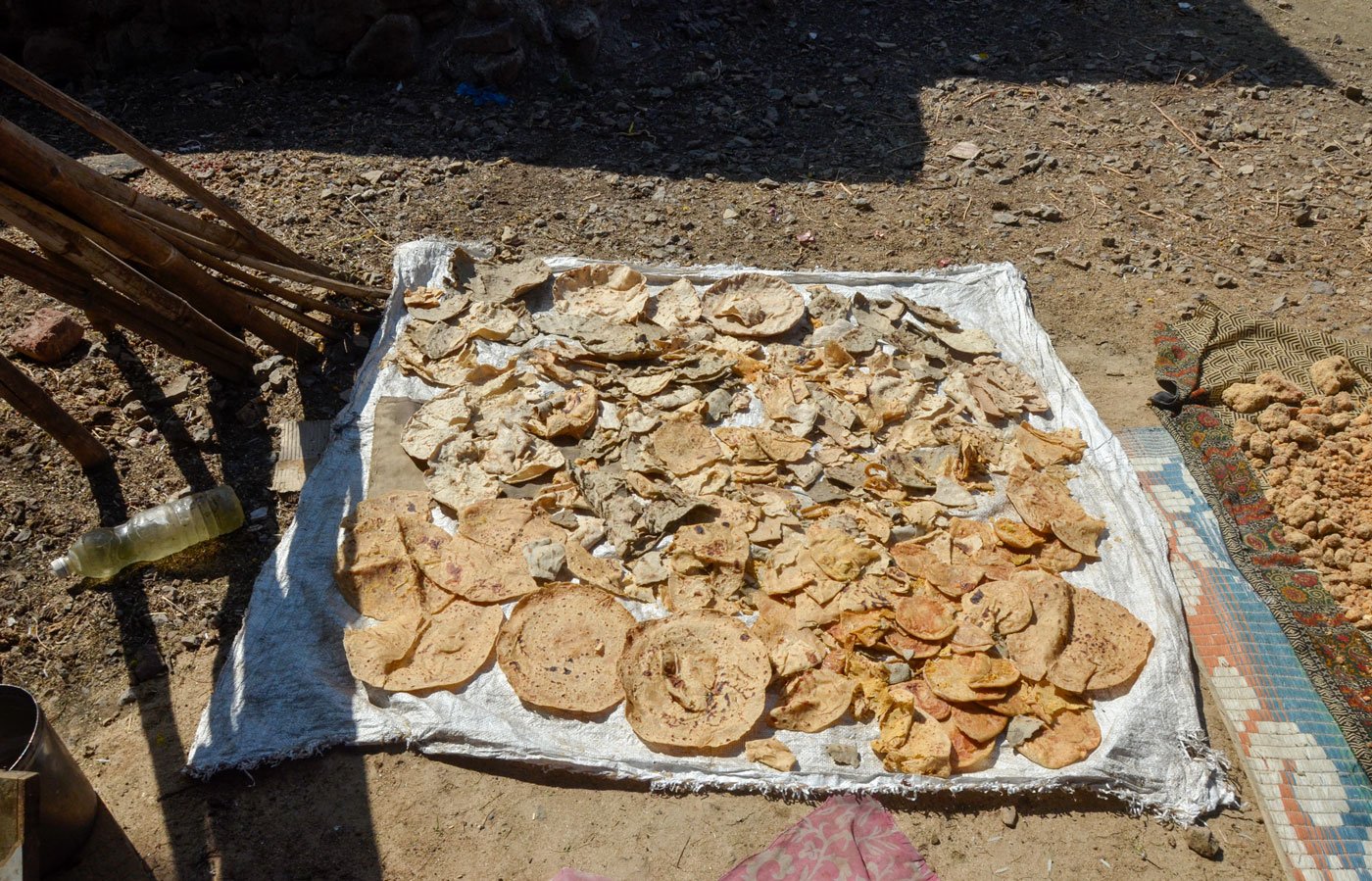 The stale ragi , bajra and jowar bhakris that Shantabai used to collect by begging. She hasn't got even this since March 22 (file photo)

His family would manage on his monthly earnings of Rs. 6,000-7,000. “We begged all through our childhood and youth. Our son’s earnings had dragged us back from that activity, but since his accident, we have been begging again,” Shantabai had told me in 2018. In a space outside her house she dries stale bhakris – made of ragi , and bajra or jowar – leftovers she had collected in Karade. “We dry them out in the sun. And then boil them in hot water before eating. This is what we eat – morning, afternoon and night. This is our food.”

Alongside the stale bhakris , she sometimes also got a bit of raw rice. Right now, she is left with only two kilograms of rice. She, Dhulya and Sandeep are eating just once daily – cooked rice, slightly fried in some oil, with a little chilli powder and salt. “I’ve got nothing since March 22,” she says, “not even stale bhakri . Once this rice gets over, we will have to starve.”

With barricades made of tree branches springing up around villages here – as people try to keep out the ‘virus’ – Shantabai and Dhulya can only roam the outskirts, “looking if someone has thrown any bhakris or other food.”

Dhulya even tried to go to Pune city – 66 kilometres away – to beg or do road-digging work, if possible. But he says, “On Saturday, the police stopped me near Shikrapur village, as I walked towards Pune. They mentioned some virus and asked me to cover my mouth. I got scared and returned home.”

Besides Shantabai’s, 10 other Pardhi families from her settlement are at the edge of starvation as they are denied entry into the villages. For these socially stigmatised groups, begging has long been a vital source of survival. One always fraught with other risks. 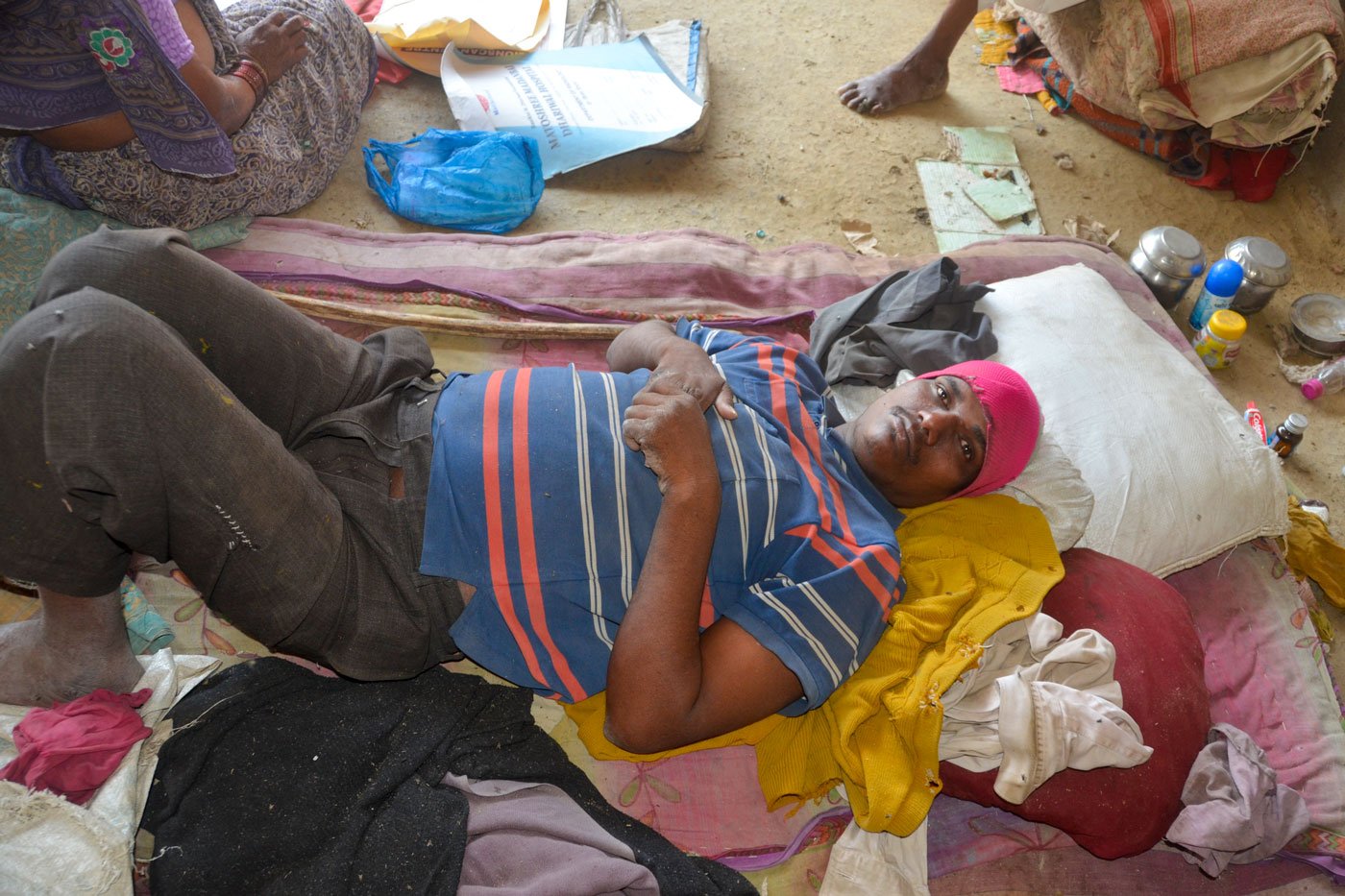 Sandeep is bedridden, paralysed from the waist down. Shantabai is worried about finding food to feed him (file photo)

Begging was criminalised in Maharashtra, by the Bombay Prevention of Begging Act, 1959. It gives powers to enforcement agencies to arrest, without warrant, those persons found begging, and put them in any certified institutions for a period of 1-3 years. Many states have adopted this Act, or derived versions of it – there being no central law on begging and destitution.

In August 2018 though, the Delhi High Court observed that provisions of the Act would not sustain constitutional scrutiny and deserved to be struck down. (That has not happened in Maharashtra).

"Begging,” noted the Court, “is a symptom of a disease, of the fact that the person has fallen through the socially created net. The government has the mandate to provide social security for everyone, to ensure that all citizens have basic facilities, and the presence of beggars is evidence that the state has not managed to provide these to all its citizens."

Many of the announcements made in the finance minister’s ‘package’ (of March 26, to address the Covid-19 crisis) will not work out for these citizens. They have no ration cards, no bank accounts, no MGNREGA job cards. How will they get those five kilograms of ‘free foodgrain?’ Or direct cash transfers under the Pradhan Mantri Garib Kalyan Yojana? How will any of these reach Geetabai and Shantabai? Also, these communities know little about the Covid-19 pandemic, even less about the precautions they need to take.

As Sunita Bhosale, also a Phanse Pardhi and a Pune-based social worker with the community, says: “People are seriously affected. They don’t have food to eat… How will your announced schemes reach us?”

And, of course, says Dhulya, it is hard to find work at the best of times, let alone during the lockdown. “People doubt us because we are Pardhis. If this begging is also stopped, we will just have to die.”