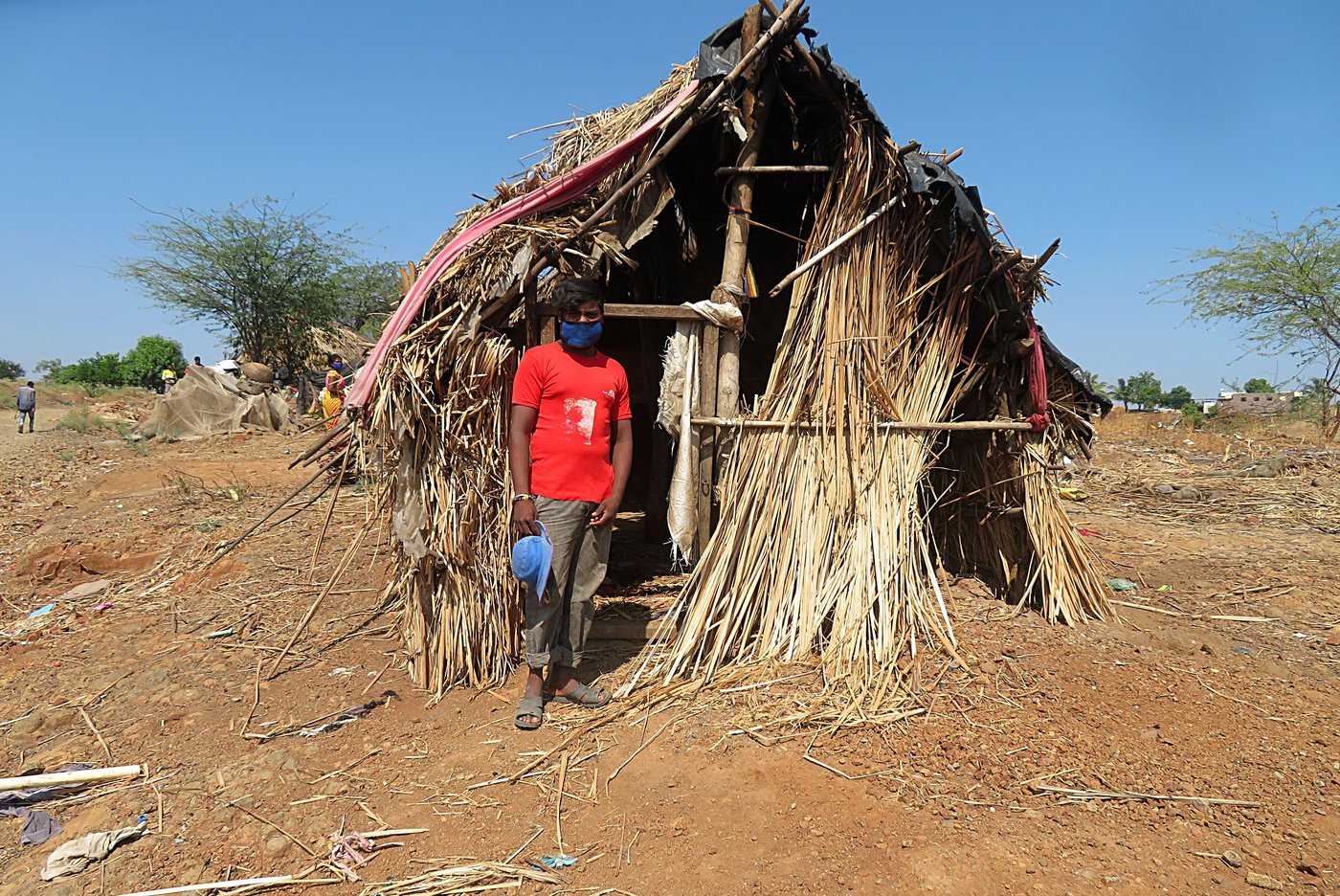 At this Adivasis settlement in Pune district, Covid positive persons are isolating in straw huts, with no electricity or water, and sparse rations. Masking, ventilation, oximeters and more have no meaning here

Amol Barde’s ‘isolation room’ is a dry straw hut with a broken door, a damaged roof covered with a torn black plastic sheet, and an uneven mud floor strewn with stones.

He moved into this empty hut in a remote area of Maharashtra’s Shirur taluka on May 1, after he tested Covid-positive

When the May heat makes it difficult to rest inside, he seeks relief under a peepal tree a few steps away. “From 11 in the morning to 4 in the afternoon, I sleep under that tree, on a plastic mat,” he says.

On May 1, 19-year-old Amol had woken up with fever, headache and body pain, and had immediately travelled in a shared jeep to Shirur Rural Hospital, 12 kilometres from his hut.

When a rapid antigen test showed he was positive, he asked the doctor at the hospital what he should do next. “The doctor told to buy 10-days’ medicines and stay in a separate room away from my family for 14-15 days,” Amol says.

“A bed was not available,” he adds. Shirur Rural Hospital has 20 beds with oxygen facilities, and 10 isolation beds (the medical superintendent there told me). So Amol followed the doctor’s instructions and bought medicines from a chemist next to the hospital. Since it was not possible to isolate in his own small hut, he moved to a neighbour’s empty hut. “They went out for work for few months in April. I phoned them to allow me to stay until I finish my course [Covid treatment],” says Amol. 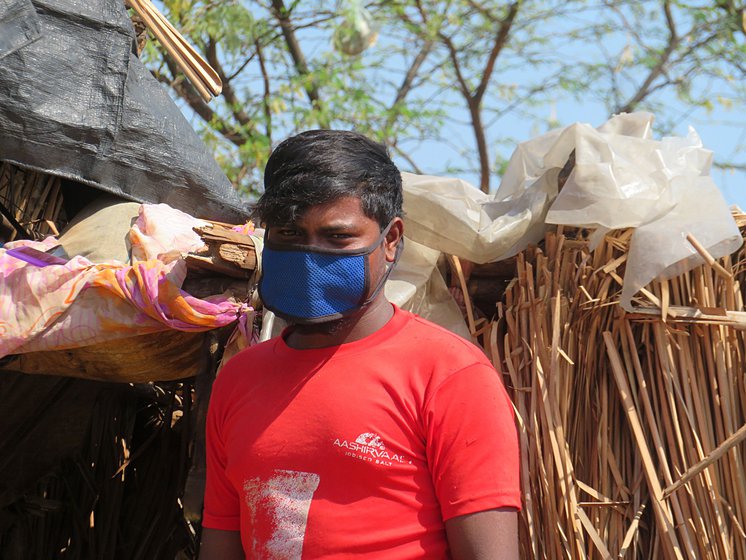 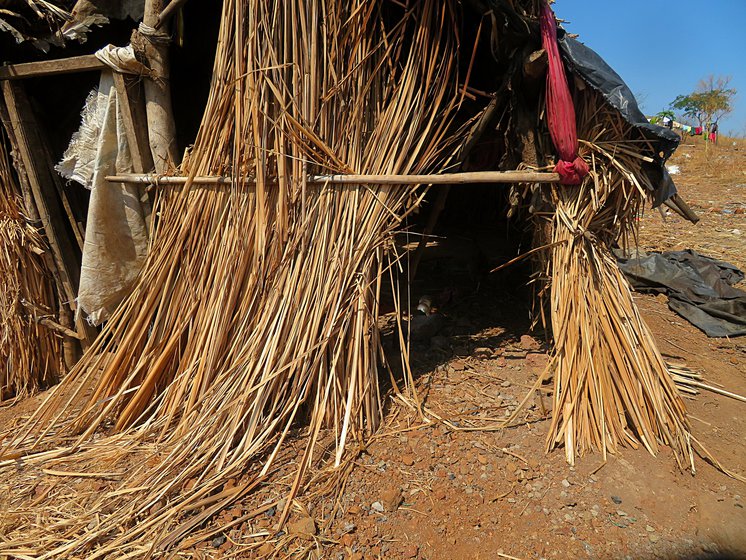 With no hospital bed available, Amol Barde isolated himself in this neighbour’s hut with a broken door, damaged roof and stone-strewn floor

For rural Shirur’s 321,644 residents (Census 2011) across 115 villages, the taluka has a total of 902 beds in nine government-run Covid Care Centres for people with mild symptoms and three Dedicated Covid Hospitals for severe patients, says Dr. D. B. More, health officer of this taluka in Pune district. From April to May 10, Dr. More adds, rural Shirur was recording 300 to 400 positive cases a day.

With no bed available, while Amol isolated himself in the neighbour’s hut, his mother Sunita, 35, sister Pooja, 13, and brother Bhaiya, 15, remained in their own small hut nearby. These huts are among a remote cluster of around 25; the nearest village, Chavhanwadi, is eight kilometres from the settlement.

The Barde family are Bhil Pardhis, an Adivasi community, a sub-group of the nomadic Pardhi tribe. The Pardhis , along with various other tribes, were branded as ‘criminal’ by the colonial British government with the Criminal Tribes Act. In 1952, the Indian government repealed the Act, and the tribes were ‘denotified’. Some of them are now included in the list of Scheduled Castes, some as Scheduled Tribes, and some are in the Other Backward Classes category.

The 10 days of medication that Amol bought, including paracetamol, cough syrup, and multivitamins, cost around Rs. 2,500. “I had carried 7,000 rupees," he says. It had taken him nearly nine months to save Rs. 5,000 from his farm wages. "And I finished more than half of it in just one day,” he adds. Another Rs. 2,000 his mother had borrowed from a neighbour and given it to her son to take along.

Amol and his mother Sunita each earn Rs. 150 a day for roughly 20 days of the month by working on farms in nearby villages. Sunita’s husband Kailash abandoned her and their children eight years ago. “He married someone else,” she says. With Amol in isolation, she has been missing wage work to take care of him. “I carry food, water to his hut,” she says.

The family keeps moving from place to place every year or two years, as is the practice among Bhil Pardhis. None of the residents of her present settlement in Shirur have a ration card, a voter ID or an Aadhaar card. Government schemes remain out of their reach. 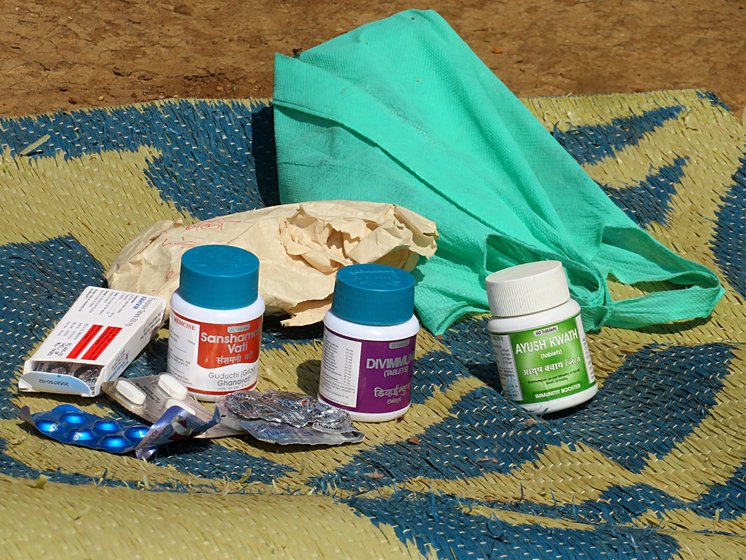 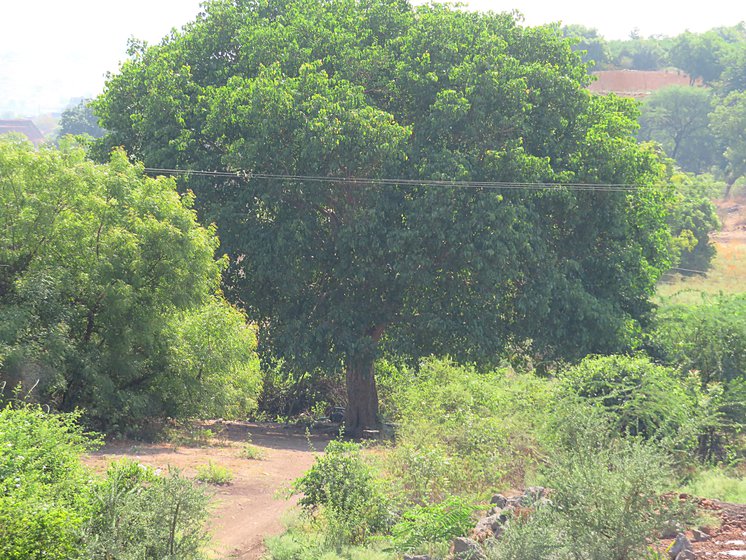 Left: The medicines cost Rs. 2,500. It had taken Amol nearly nine months to save Rs. 5,000 from his farm wages. Right: During the day, Amol seeks relief from the heat under a nearby peepal tree

With some of the roughly Rs. 4500 that remained when Amol returned, Sunita went to a grocer's shop eight kilometres away to buy rations to last for 20 days – wheat flour and rice as usual, but also tur , moong dal and matki . “He was taking a  lots of medicines thrice a day. He needed energy along with it. Otherwise, we can’t afford these items,” Sunita says. The dals are now all over, she adds, some rice remains. “So we are having that fried with salt and red chilli powder."

When Amol began his home isolation, he was not fully aware of the protocols. “I know only about wearing a mask, keeping distance and taking medicines. What else should I do?” he asked.

The revised guidelines of the Ministry of Health & Family Welfare for home isolation of mild /asymptomatic COVID-19 recommend: “Patient should at all times use triple layer medical mask. Discard masks after 8 hours of use or earlier if they become wet or visibly soiled. In the event of care giver entering the room, both care giver and patient may consider using N-95 mask."

Both Amol and Sunita use washable polypropylene masks. “I bought this mask in January for Rs. 50 from Shirur market,” he says. He has been wearing the same mask since. “It has torn a bit. I use it all day, wash it in the night and wear it again in the morning.”

The guidelines also ‘strongly advise’ “self-monitoring of blood oxygen saturation with a pulse oximeter.” “We don’t have that,” says Amol. “Even if we had it, no one can read in my house.” With his family frequently on the move, he and his siblings were never enrolled in school.

In each hut here of the 25 Bhil Pardhi families, there are roughly four family members. Till May 20, three people had tested positive in this settlement, 70 kilometres away from Pune city. Amol was the third. 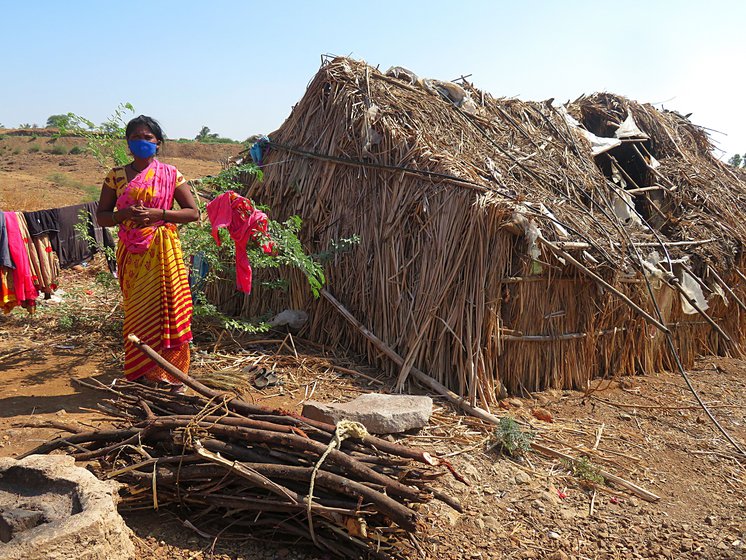 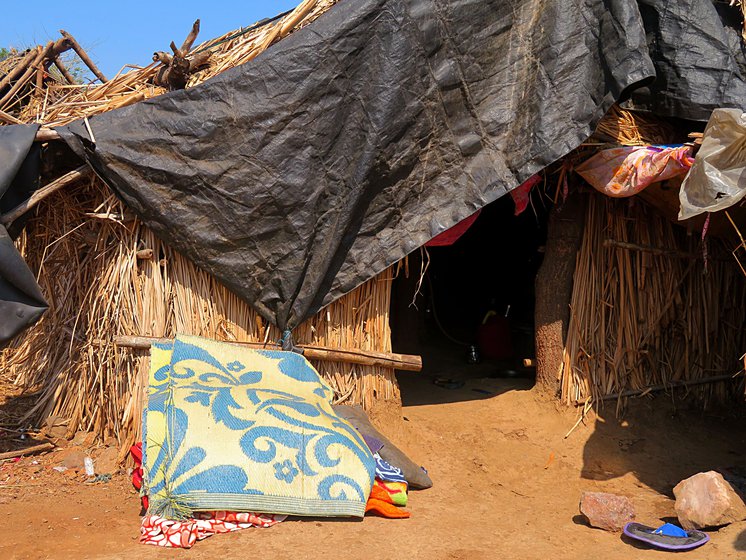 With Amol in 'isolation', his mother Sunita (left) and siblings remained in their own small hut nearby (right)

Santosh Dhule was the first to test positive here, on April 29, followed by his wife Sangeeta on April 30, after rapid antigen tests at Shirur Rural Hospital. “We both were coughing, had fever and body pain,” says Sangeeta. “We were also told a bed was not available.”

Home isolation was their only option. In such instances, the Health Ministry guidelines clearly state the role of district authorities: “The health status of those under home isolation should be monitored by the field staff/surveillance teams through personal visit along with a dedicated call centre to follow up the patients on daily basis.”

But no health worker from the nearest village, Chavhanwadi,  has visited the settlement so far, says Santosh. “Only in April 2020 the gram sevak and ASHA worker came here to make us aware of corona symptoms.”

However, health officer of Dr. D. B. More says, “We are in touch with all the patients in home isolation regularly with the help of ASHA workers and anganwadi workers. If some patients in settlements on the villages’ outskirts are being neglected, we will work on this too.”

Sangeeta, 26, and Santosh, 28, both completed their two-week isolation in their thatched hut by mid-May. They have a 10-year son and 13-year daughter who used to go to the zilla parishad school in Nimone village, around nine kilometres away. Santosh is the only person in this cluster of huts who has studied till Class 4, and though this Bhil Pardhi family too moves settlements every few years, he tries to ensure his kids attend school.

“But their education has completely stopped, as everything is online now,” says Sangeeta. She and Santosh cultivate either green chillis or dodka (ridge gourd) on a small patch of open land near their hut. “We grow 20-25 kilos of one of these vegetables each month,” says Sangeeta. They sell this to retail vendors in Shirur market. Depending on the yield and price, it brings them a monthly income of Rs. 3,000 to Rs. 4,000.

With four people in their small hut – and a smoky earthen chulha inside, as well as clothes, utensils, bedsheets, farm tools and other household items, it would have been impossible to maintain distancing norms. 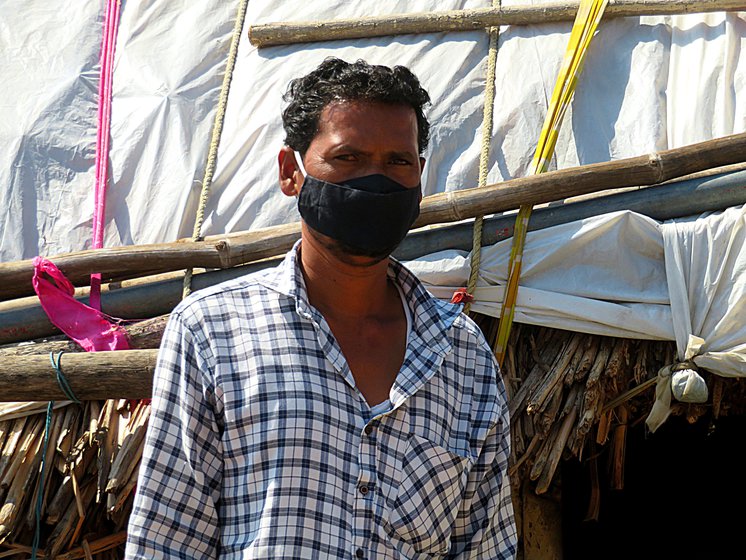 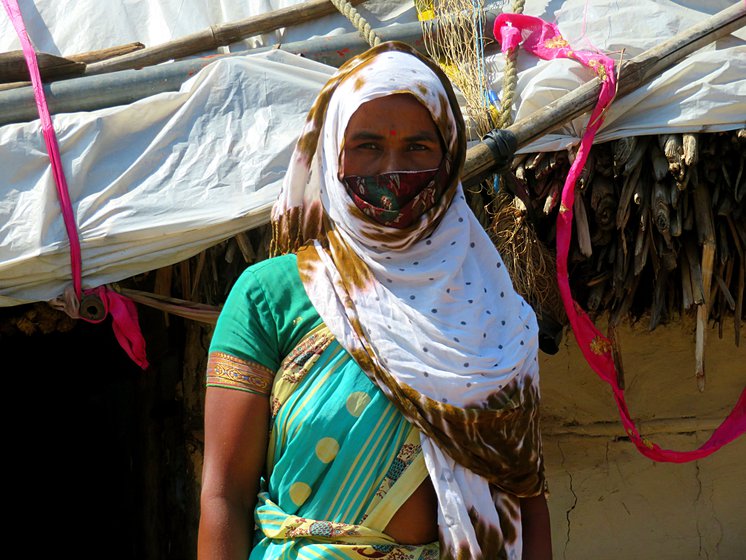 'Our settlement doesn’t even have electricity or water', says Santosh; he and Sangeeta were the first to test positive in this Pardhi settlement

The Ministry guidelines note: ‘The patient should be kept in a well-ventilated room with cross ventilation and windows should be kept open to allow fresh air to come in.”

“Our hut is very small. No window. When we both tested positive we first became worried for our children,” says Sangeeta. On April 28, they sent both their kids to Santosh’s brother’s house in the same settlement.

“Our settlement doesn’t even have electricity or water supply. Maintaining hygiene is beyond our reach,” says Santosh. The guidelines assert: ‘Use soap and water for hand washing at least for 40 seconds. Alcohol-based hand rub can be used, if hands are not visibly soiled.”

The family has to fetch water from a well half a kilometre away. “There’s always a water shortage and in summer it gets worse,” says Sangeeta.

Till May 22, Pune district has recorded 992,671 Covid-positive cases (since March 2020) – of these, 210,046 are in rural areas and there have been 2,755 deaths, Ayush Prasad, chief executive officer of the zilla parishad , told me. “The cases are declining,” he said. Dr. D. B. More also said daily positive cases are decreasing in rural Shirur.

On the phone on May 22, Amol told me. “One more woman was found positive in our settlement.”

His two-week isolation period is over, his mother and sibling have not had any symptoms. But he is continuing to stay in the neighbour’s empty hut. “I am feeling better now,” he says. “But as a precaution I will stay two more weeks in this hut.”

Editor's note: After we first published this article, we modified some details about how much Amol Barde spent on medicines and the family's finances, upon receiving further clarifications from the family.