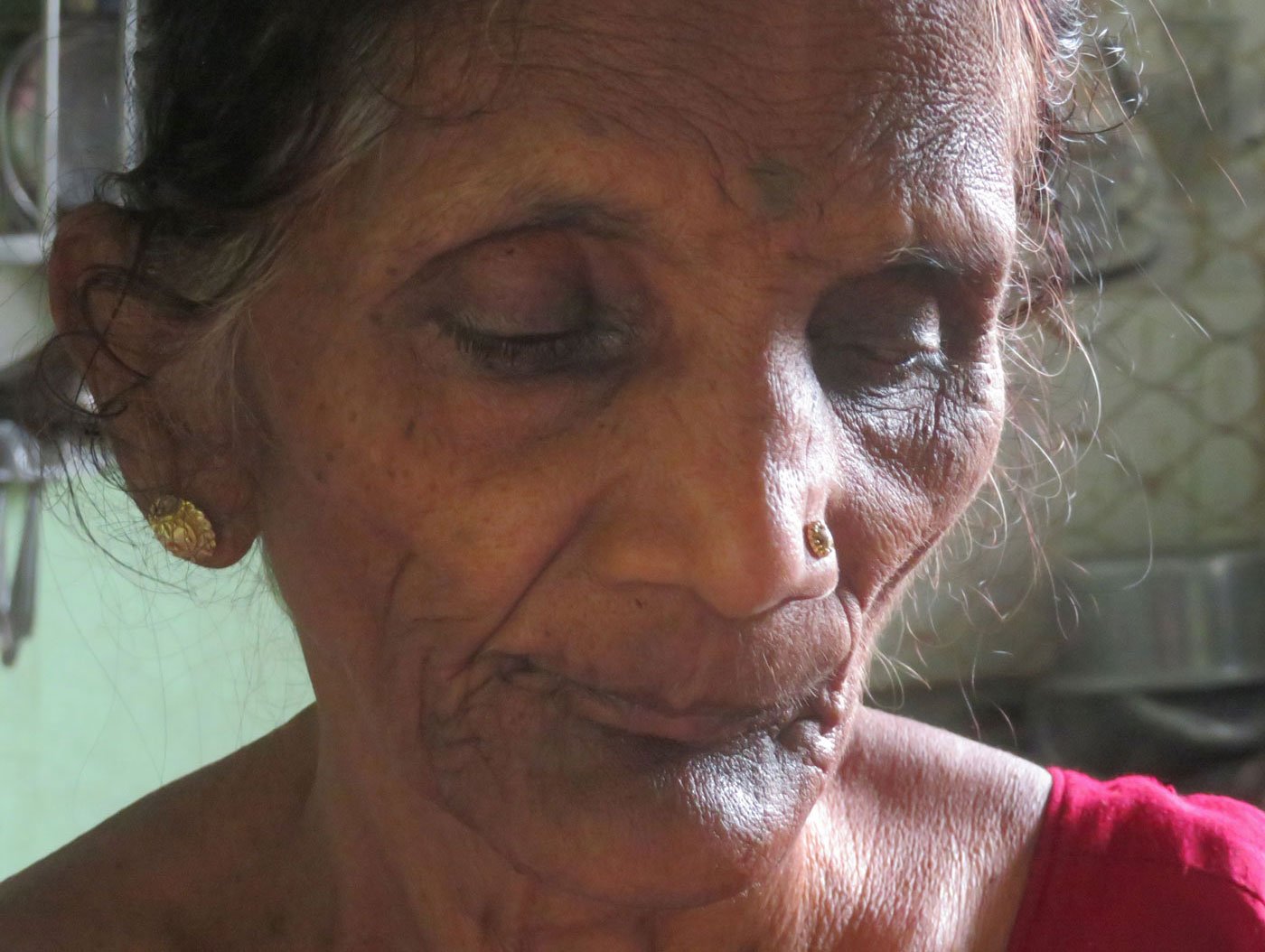 Seeing ‘the world through touch’ in a pandemic

Vimal and Naresh Thackeray, both visually impaired, used to sell handkerchiefs on Mumbai’s local trains. The lockdown left them, and many others, with no income, little government support and great uncertainty

Vimal Thackeray is washing clothes in the tiny bathroom of her two-room house in Vangani town, struggling, with weakened hands, to apply soap to a pile of sarees, shirts and other garments, pouring water over them from a green plastic mug.

She then takes each washed item to her nose and smells it several times to make sure it’s clean. Then, holding on to a wall, touching the door frame for direction, she moves out of the bathroom, but stumbles on the threshold. And sits on a bed in the room to talk to me.

“We see the world though touch, and it’s through touch that we sense our surroundings,” says 62-year-old Vimal. She and her husband Naresh are both visually impaired. They used to sell handkerchiefs in trains on the western railway line of Mumbai, from Churchgate to Borivali stations. That work has stopped since March 25, when the city’s local train services were suspended during the nationwide Covid-19 lockdown.

Battling the crushing crowds of Mumbai’s locals, they together earned, before the lockdown, at most Rs. 250 a day – with Sundays off for some rest. They used to buy the kerchiefs in a wholesale market in Masjid Bunder in south Mumbai – 1,000 pieces at a time. Every day, before the lockdown, they managed to sell 20-25 hankies, each for Rs. 10.

Their 31-year-old son Sagar, who lives with them, has studied till Class 10 and worked at the warehouse of an online company in Thane till the lockdown began. He and his wife Manju, a domestic worker, added Rs. 5,000-6,000 to the family’s monthly income. Along with their three-year-old daughter Sakshi, the five Thackeray family members live together in the small two-room house. “It is now hard to manage the rent of Rs. 3,000, plus expenses like rations, medicines and occasional doctors’ fees,” says Naresh. 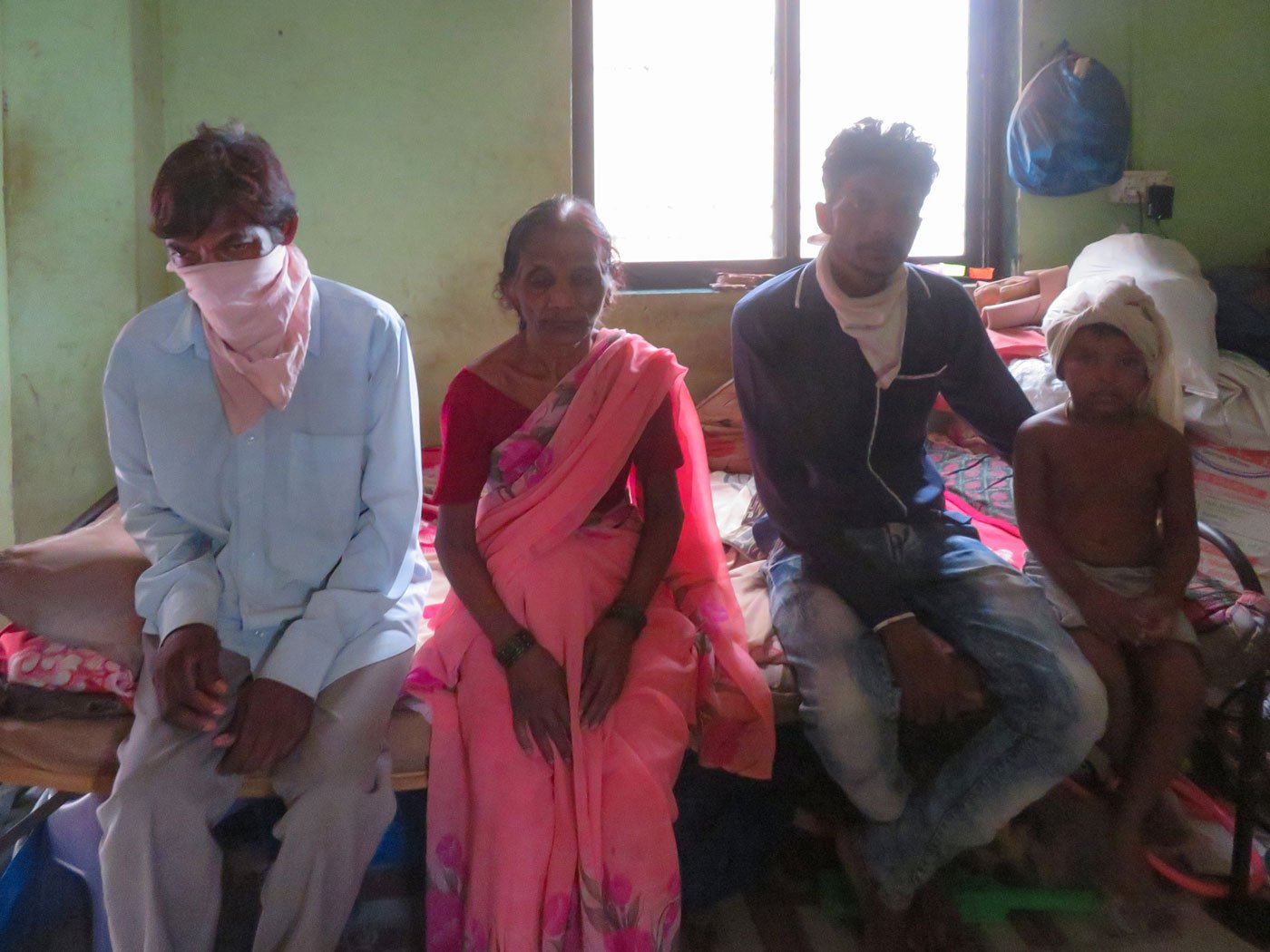 The lockdown left Naresh and Vimal Thackeray, their son Sagar, his daughter Sakshi (left to right), and wife Manju, with no income

Though the entire family’s income dried up with the lockdown, Sagar and Manju expect to be called back to work eventually – but Vimal and Naresh don’t know if and when they can resume. “Can we now sell the handkerchiefs in the train like before? Will people even buy handkerchiefs from us?” Vimal asks.

“We have to touch things a thousand times a day – objects, surfaces, money, the walls of public toilets, doors. There are endless things we touch. We can’t see the person who is coming from the opposite side, we bump into them. How do we avoid all this, how can we keep the required distance?” says 65-year-old Naresh, sitting on a plastic chair. A light pink cotton handkerchief – from the lot he sells -- is tied around his mouth as a mask.

The family belongs to the Gond Gowari community, a Scheduled Tribe. They have a BPL ration card, and have received additional ration kits from voluntary groups during the lockdown. “Many NGOs and other organisations have distributed rice, dal , oil, tea powder, sugar [in our colony],” says Vimal. “But is there anyone to pay our rent or electricity bill? And what about the gas cylinder?” Their rent is pending since March.

Vimal was seven when she lost her vision due to corneal ulcers. And Naresh become blind at the age of four due to mishandling of an acute bacterial infection, his medical reports say. “I had boils in my eyes. The vaidya [traditional healer] in the village put something in my eyes to treat me, but instead I lost my vision,” he says.

Vimal and Naresh are among the over 5 million visually impaired persons in India. Census 2011 says that of these, 545,131 are marginal workers – persons who did not work for at least 183 days in the preceding 12 months. Many, like Vimal and Naresh, earn a livelihood as vendors of small items. 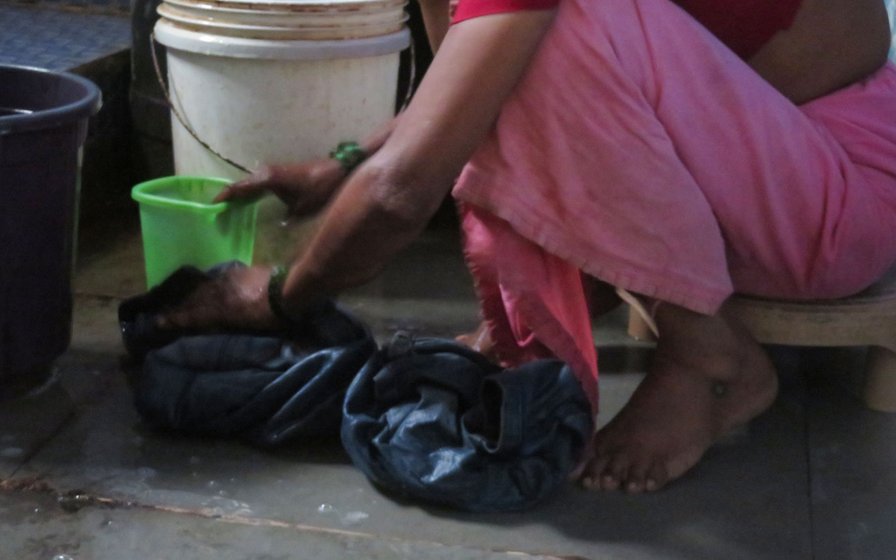 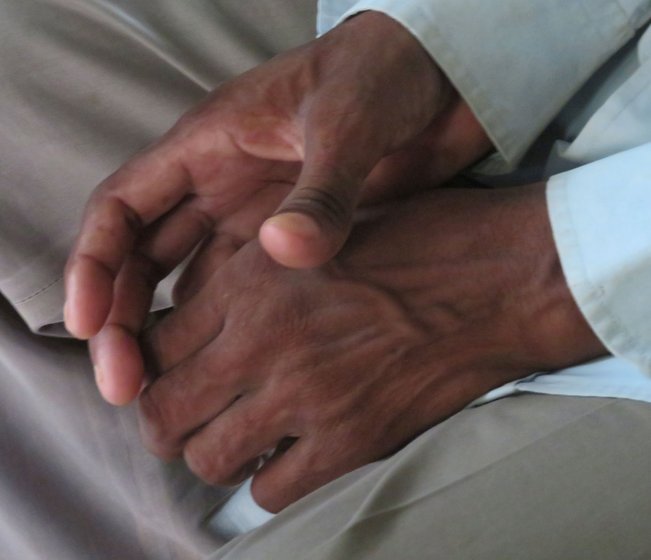 'It is through touch that we sense our surroundings', says Vimal Thackeray (left); she and her husband Naresh are both visually impaired

In Vangani town of Thane district, where they live, of the population of 12, 628, roughly 350 families have at least one visually impaired member. Rents here are less expensive than in Mumbai city, 64 kilometres away, and that’s perhaps why visually impaired families have been settling here from Amravati, Aurangabad, Jalna,  Nagpur and Yavatmal since the 1980s. “The rent is much cheaper, and the toilet is inside the house here,” says Vimal.

She and Naresh came here from Umri village in Umred taluka of Nagpur district in 1985. “My father had a farm, but how could I work there? There was no other work for blind people like us, so we came to Mumbai,” Naresh says. Since then, they had been selling handkerchiefs – until the lockdown began. “Rather than begging, this was a more decent way of living,” he adds.

Other than Vangani, disabled persons from various other parts of Mumbai and from other nearby townships sell daily-use items in the city’s western, harbour, and central railway lines. A paper in the Disability, CBR [Community Based Rehabilitation] and Inclusive Development journal, based on a survey of 272 visually impaired people of Vangani town in 2012, says: “Around 44% were in the business of selling daily-use items like locks and keys, chains, toys, card holders, etc., in Mumbai local trains; 19% were unemployed and 11% were involved in begging.’

Now, their safety concerns and employment needs – always neglected – have been aggravated by the lockdown and pandemic.

In 2015, the Department of Empowerment of Persons with Disabilities launched the Accessible India Campaign (Sugamya Bharat Abhiyan). One of its aims was to make railway stations fully accessible by 2016, with standard ramps for barrier-free entry, elevators, Braille-embossed signage and more. But with very slow progress, the deadline was extended to March 2020. 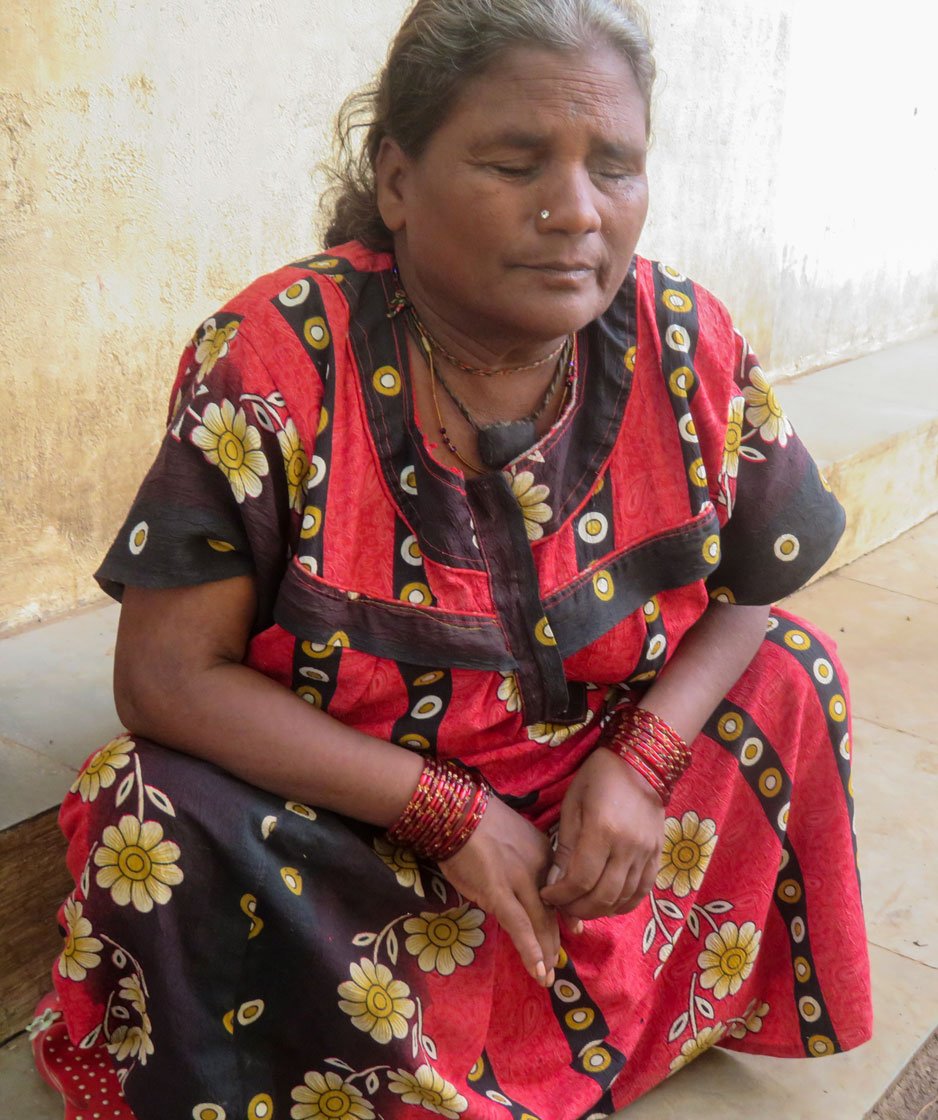 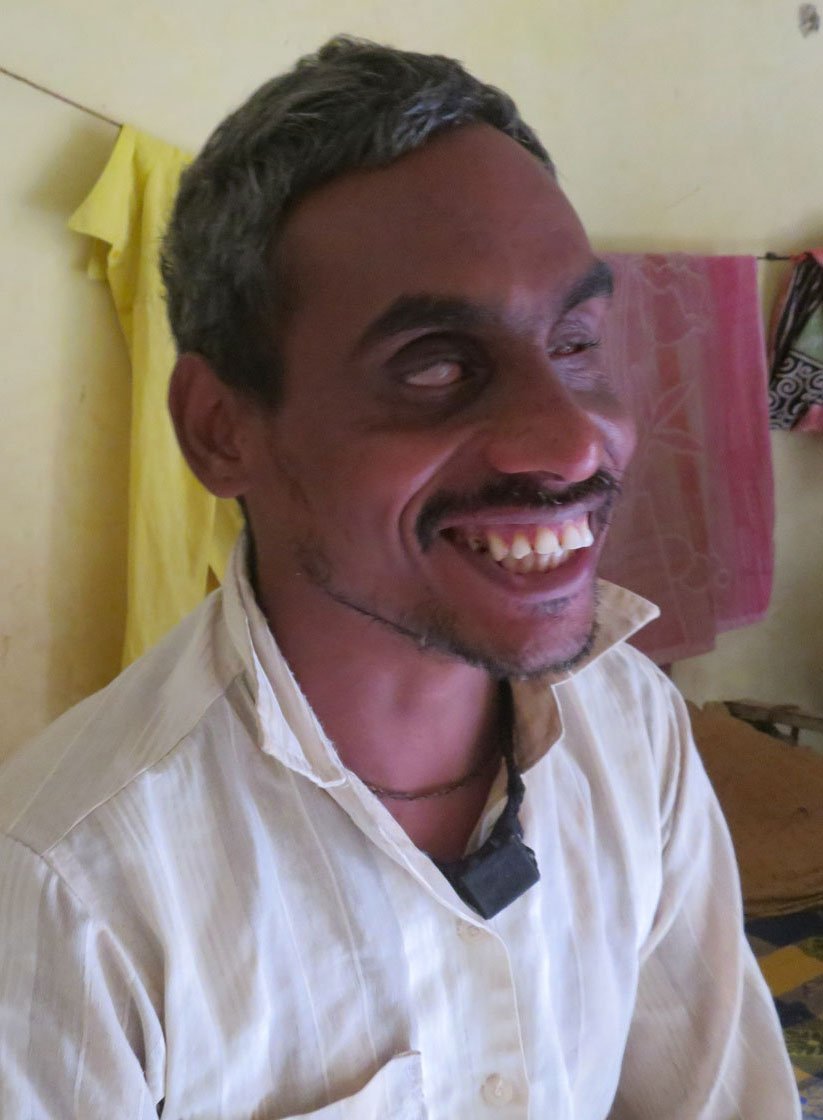 Left: 'Laws are of no use to us', says Alka Jivhare. Right: Dnyaneshwar Jarare notes, 'Getting a job is much more difficult for us...'

“All such laws are of no use to us,” says 68-year-old Alka Jivhare, who lives in the same locality as the Thackeray family. “At the station I have to call people to help me find my way to the stairs, to the door of the train or to a public toilet. A few help, others ignore us. The height between the platform and train is too wide at many stations, and my leg has got trapped many times, but I have managed to pull it out.”

On the streets of Mumbai city too, Alka struggles to walk alone with a white-and-red  cane in one hand. “Sometimes my leg slides into a gutter or a pothole or on dog shit,” she says. “Many times I have hurt my nose, knee, toes, as I bump into vehicles parked on the road. We can’t protect ourselves until someone warns us.”

Jivhare is worried that this help from strangers and passers-by will now stop. “You have to be careful now because of this virus. Will anyone help us in crossing the road or getting in and out of the train?” she asks. Alka belongs to the Matang community, a Scheduled Caste, and lives with her younger brother’s family after her husband Bhima died in 2010. He too was blind. They settled in Vangani in 1985 from Rupapur village of Adilabad district in Telangana. Their 25-year-old daughter Sushma is married and earns an income by doing domestic work.

“You must wash your hands or use that liquid [hand sanitiser],” Alka says. “That liquid will get over quickly because of our constantly having to touch things – just 100 ml costs Rs. 50. Do we keep spending on this or try and ensure we get two basic meals a day?”

Alka used to earn around Rs. 4000 a month by selling nail cutters, safety pins, hairpins handkerchiefs and other items on the central line from Vangani to Masjid Bunder. “I live at my brother’s place, and don’t want to be a burden on him. I have to earn,” she adds.

Because hawking is prohibited under Section 144 of the Railways Act, 1989, she often had to pay a fine. “The police fined us for Rs. 2,000 at least once a month. They say it is not allowed. If we try to sell on the streets, other vendors don’t allow us. Where we will go then? At least give us some work to do from home.” 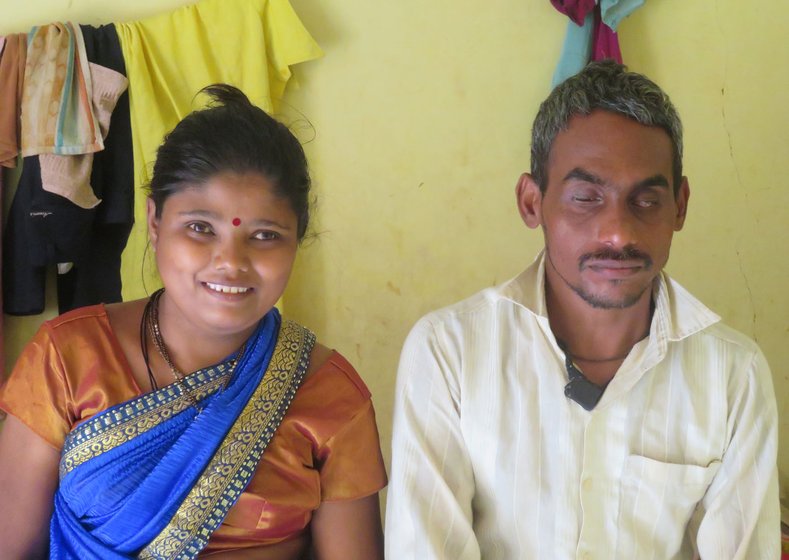 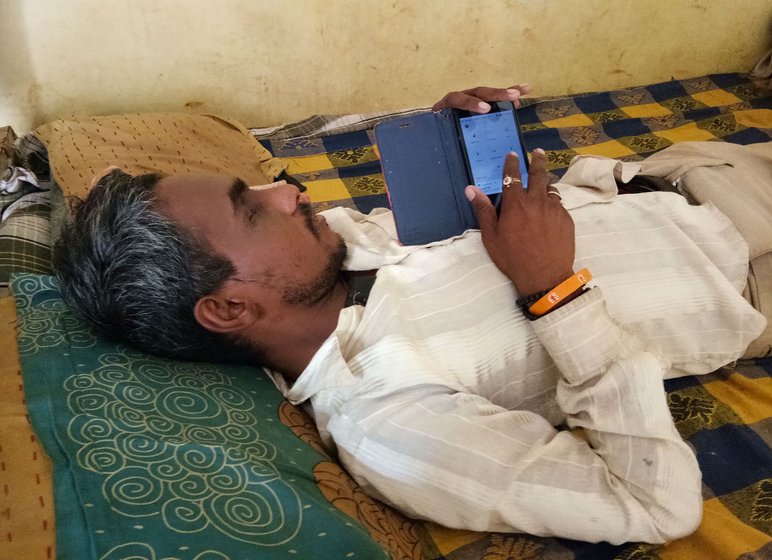 'It was not even a year since I started earning decently and work stopped [due to the lockdown],' Dnyaneshwar Jarare says; his wife Geeta (left) is partially blind

Next to Alka’s next single-room home, Dnyaneshwar Jarare, who too is visually impaired, is busy with his mobile, which is promoting him with every touch. His wife Geeta, a homemaker, who is partially blind, is busy cooking lunch.

In September 2019, 31-year-old Dnyaneshwar started working at a massage centre in Bandra West with a fixed monthly salary of Rs. 10,000. “It was not even a year since I started earning decent money and work stopped [due to the lockdown],” he says. Before that, he sold files and card holders on the overbridges of western railway stations. “We will cover our mouth, sanitise hands, wear gloves,” he says. “But only precautions are not going to feed us. Our livelihood should continue. Getting a job is much more difficult for us than for other people.”

To provide employment to the disabled, the Ministry of Social Justice and Empowerment established the National Handicapped Finance and Development Corporation in 1997. In 2018-19, the Corporation trained 15,786 disabled people in hand embroidery, as sewing machine operators, data entry operators, television repair technicians and in other skills; and 165,337 disabled people got concessional credit to start small businesses.

But, says Kishor Gohil, director, projects, with the Mumbai-based NGO Drishti, “Providing training to the disabled and declaring how many people got trained is not enough. Blind, handicapped, deaf people get skill training under the scheme, but they fail to get a job. As a result, the disabled are forced to beg or sell daily use items in trains and on platforms.” Gohil himself is visually impaired; his organisation works for the safety, accessibility and employment of the disabled in Mumbai.

On March 24, the Ministry of Social Justice and Empowerment directed all state governments and union territories to immediately make available information related to Covid-19 in accessible formats for persons with disabilities – including material in braille, audio tapes, and videographs with subtitles – about the preventive steps to be taken to during the pandemic.

“Nobody came to tell us about the precautions to be taken. We learned about it by listening to news and watching television,” says Vimal. It’s noon, and with her morning chores done, she is now cooking lunch. “Sometimes the food becomes extra salty and sometimes it becomes too spicy. It must be happening to you as well,” she says, smiling.