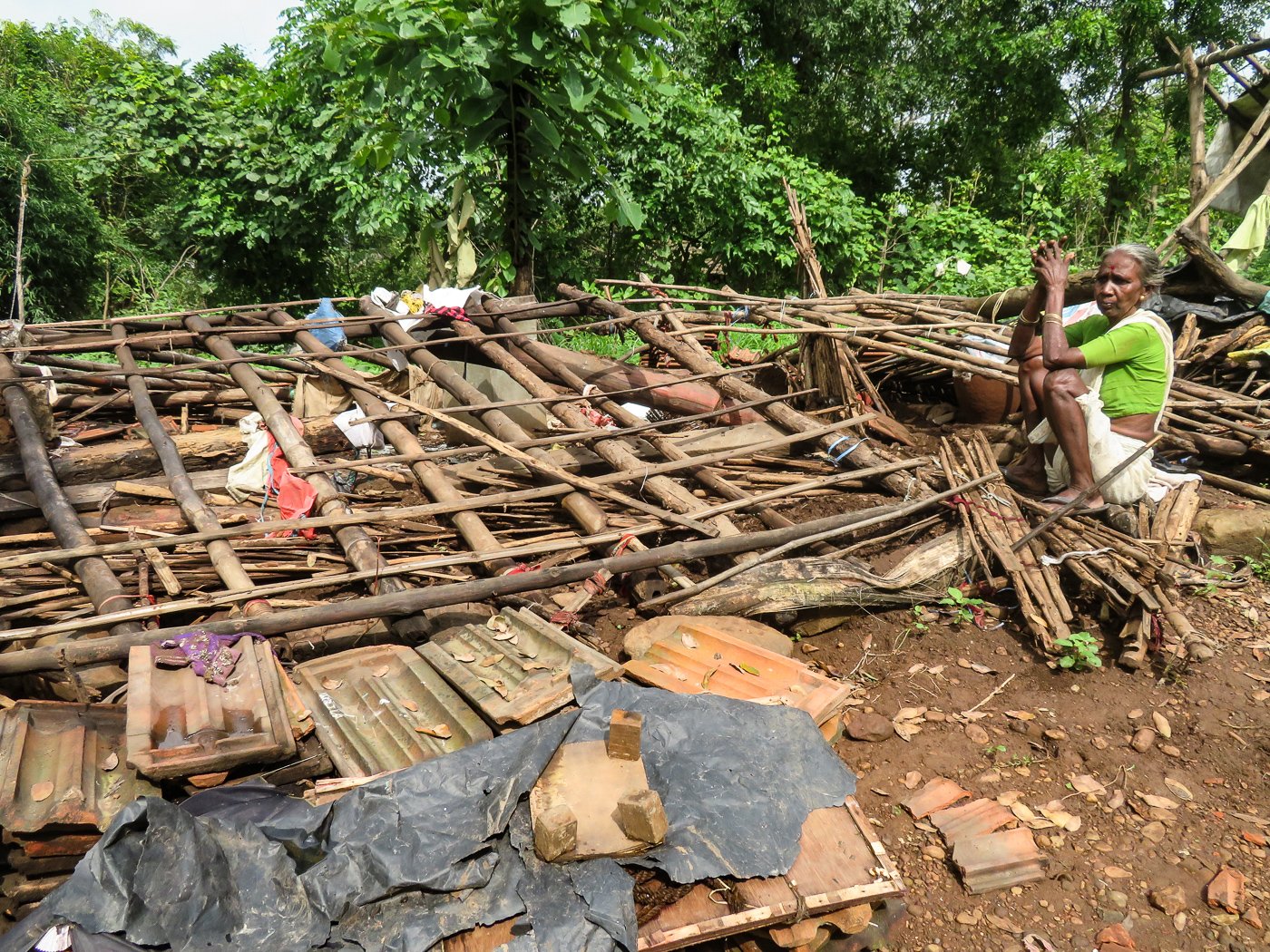 'What if the river gets angry again?'

On August 4, an overflowing Vaitarna river ravaged the homes of Katkari Adivasis in Maharashtra's Palghar district. The villagers are now anxious about depleting rations, uneven state support and another flood

“I have never seen this river so angry in my life,” says 55-year-old Sakubai Wagh. That day, August 4, her 20-year-old son Manoj and she were at home around 10 in the morning. “It was raining heavily outside,” she recalls. “Suddenly a huge wave entered our hut. We were in neck-high water for a while, holding each other’s hands. In no time, everything I had kept carefully, put together with hard-earned money – the water took it all away.”

After around terrifying 20 minutes, Sakubai and Manoj managed to wade out to higher ground nearby, from where they watched the destruction. That morning, the water from the Vaitarna river destroyed their hut along with 24 other huts in Gates Kh village of Vada taluka in Maharashtra’s Palghar district. The water receded hours later, by evening.

“See, this is my sansar [domestic world],” Sakubai says, pointing to her collapsed hut on the banks of the river. On the muddy ground are broken tiles stacked one above the other, the remnants of the bamboo roof and walls, and tattered tarpaulin sheets. The pungent smell of rotting rice, onions and potatoes, lying in the mud for days, hangs there like a cloud. “I cannot bear this smell, I feel sick,” says Sakubai. 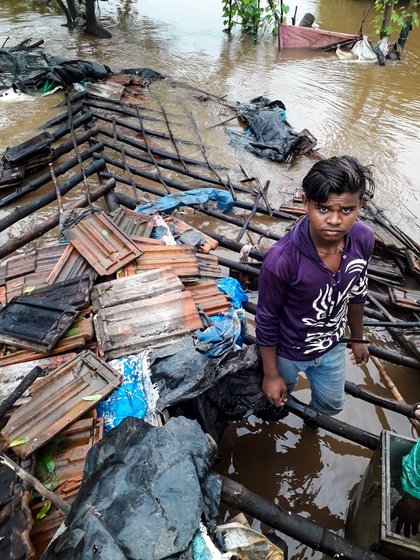 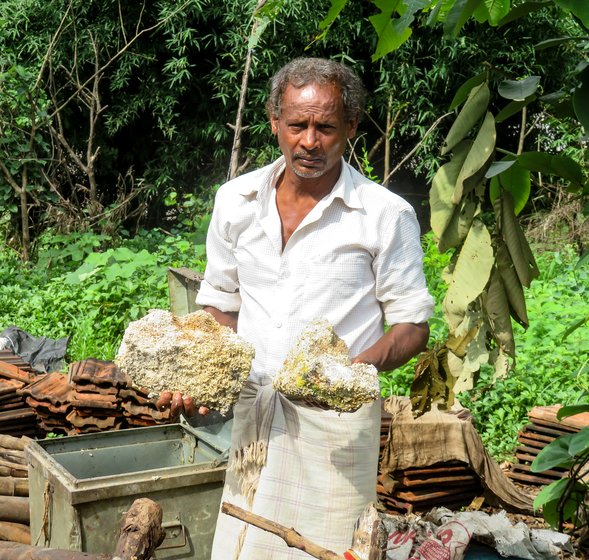 Manoj Wagh stands amidst the ruins of his collapsed house. Right: His father Parshuram with the family's rice that was spoiled by the rains

Ten days after the flood, on August 13, her husband Parshuram, 58, shows me some of the dank rice in an aluminium container. “This was my family’s ration for a month. Our voting cards, Aadhaar cards, ration card, utensils, clothes – all are gone,” he says. “Only these three godhadi got saved.” Those hand-stitched sheets are now drying forlornly on a rope.

"We live near the river, and every year the water level increases during the monsoon,” Parshuram says. “It reaches our doorstep, but never comes inside and recedes in few hours. Only once, in 2005, the water entered our huts, but it was only knee-high then and didn't destroy our huts. This year it was very bad.”

Parshuram and Sakubai are Katkari Adivasis – a community listed as a Particularly Vulnerable Tribal Group in Maharashtra – and work as agriculture labourers for Rs. 150 a day each. After their hut collapsed, they moved to Sakubai’s brother’s house in the same village, on the other side of the river. Gates Kh is divided by the Vaitarna river, and most of the concrete houses on the east bank were not affected by the flood. It’s a village of 881 people (Census 2011), 227 of them from Scheduled Tribes. 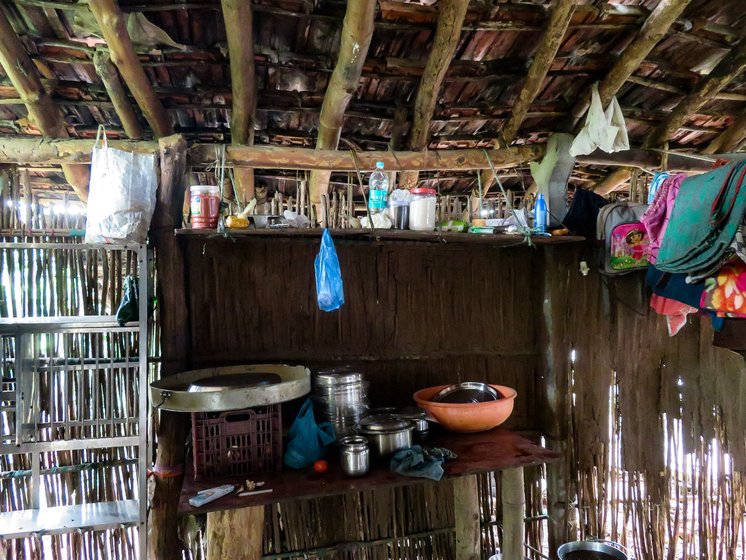 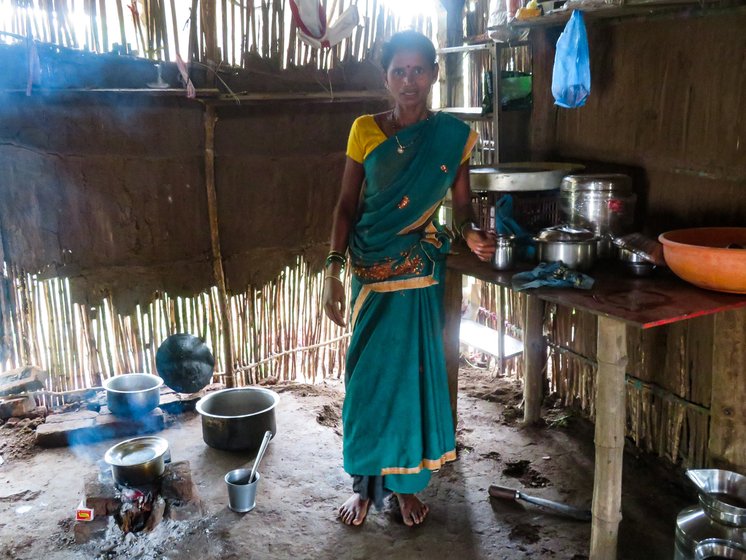 Kavita Bhoir rearranged her kitchen with the few utensils saved from the flood. Right: She is now worried about the diminishing rations

Kavita and Keshav had gone to her brother’s village (on the other side of the river) to help him on his one-acre farm. “We got a call that it has flooded here,” she says. “When we came the next day one of the thatched walls was broken. There was ankle-high mud.” The Bhoirs spent the next two days throwing out mud in buckets and rearranging their leftover belongings. A bag of clothes, plastic containers, a steel container, 2-3 steel plates, a few bedsheets – all were covered in mud. “We washed whatever was left and started using it. My son’s books and notebooks were drenched, I dried them on the chul [earthen stove],” says Kavita, looking at her empty kitchen stand, the utensils stacked in it all swept away by the flood water.

“The panchayat people and some social workers gave us some rations. But no one has yet come from the taluka office [Vada tehsildar ’s office] for a panchanama [ investigation record] and we haven’t been given any money either,” says Keshav. “Our people are living here for generations,” adds Kavita. “The government should give us a safe place to live. What if the river floods again?”

On August 5, a day after the flood, the Gates Kh village panchayat distributed five kilos of rice, five kilos of wheat flour, two kilos of dal , two kilos of sugar, 250 grams tea powder, two half-kilo packets of oil, one packet of salt, and some red chilli powder and turmeric powder to the 25 flood-hit families in Gates Kh. “All the given ration is about to get over,” says Kavita. 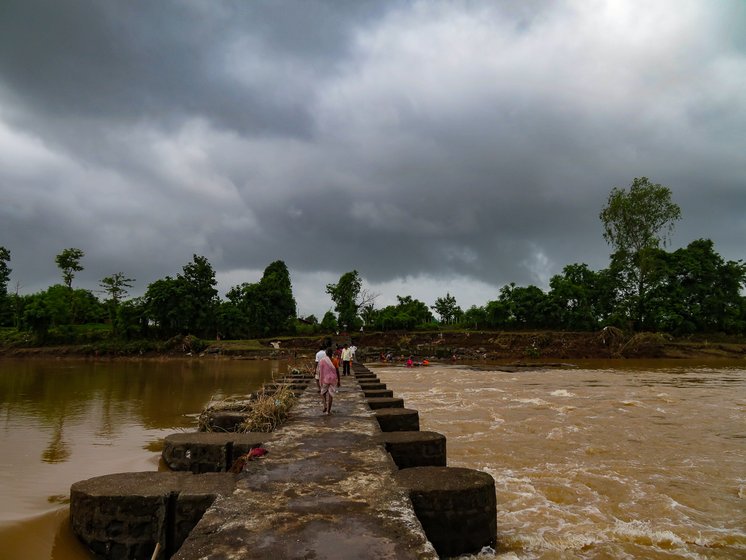 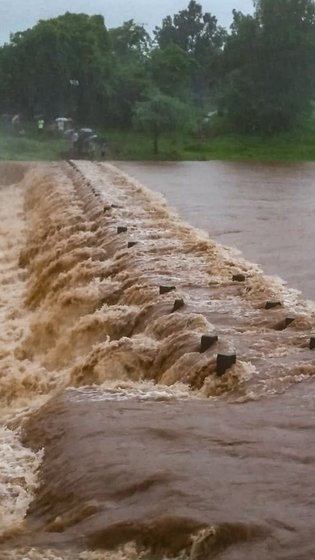 The Vaitarna river as it flows by Gates Kh village after the flood. Right: The same river on August ⁠ — the day of the flood

The heavy rainfall of August 4-5 affected 57 villages in Vada taluka , Dinesh Kurhade, the tehsildar, told me. Among the worst affected, he says, are Gates Kh, Borande, Karanje, Nane and Gorhe – all beside the Vaitarna river. From August 1 to 7, Palghar received 729.5 millimetres of rain – the normal rainfall here is 204 mm during the week.

On August 4, Borande, a village of 126 families and 499 people (Census 2011),  around seven kilometres from Gates Kh, was entirely submerged too. Only the roofs and electrical poles were visible. Each concrete house here now bears the water-level mark on the walls, whereas the kutcha houses with thatched roofs just collapsed.

“It was 6 in the morning. We were sleeping when I felt some water on my bedsheet. I woke up and saw water inside the house. I quickly woke up my kids and wife and we ran to save our life. Then a big wave entered the house. It took away everything, we could not save anything,” says 45-year-old Anil Rajkawar. “It was water everywhere, everyone was outside their houses, in waist-high water. Everyone was shouting and howling…”

Anil, his 32-year-old wife Parvati, and their kids walked for around half an hour in the water along with several others to reach at an open ground outside the village. Many stayed there for two days in a tin warehouse, until the water level dropped. Anil and Parvati work as a farm labourers for eight months of the year for Rs. 150 per day. While 102 families in the village received some help, says tehsildar Dinesh Khurade, so far Anil’s family is not among them. 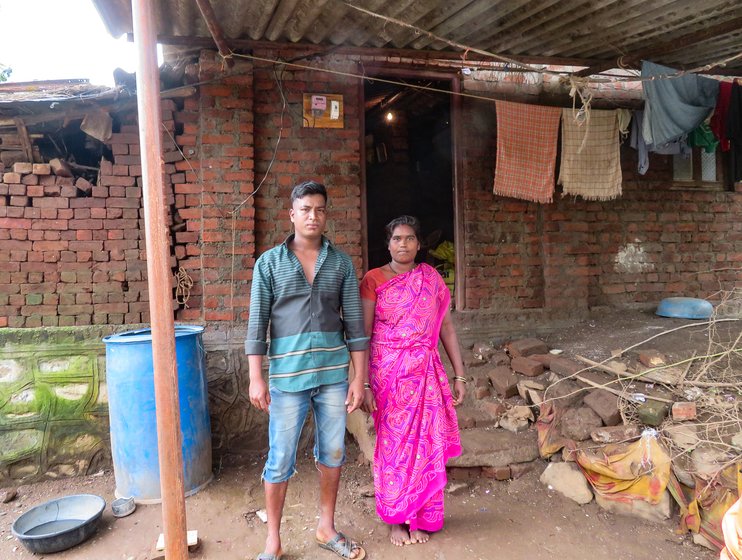 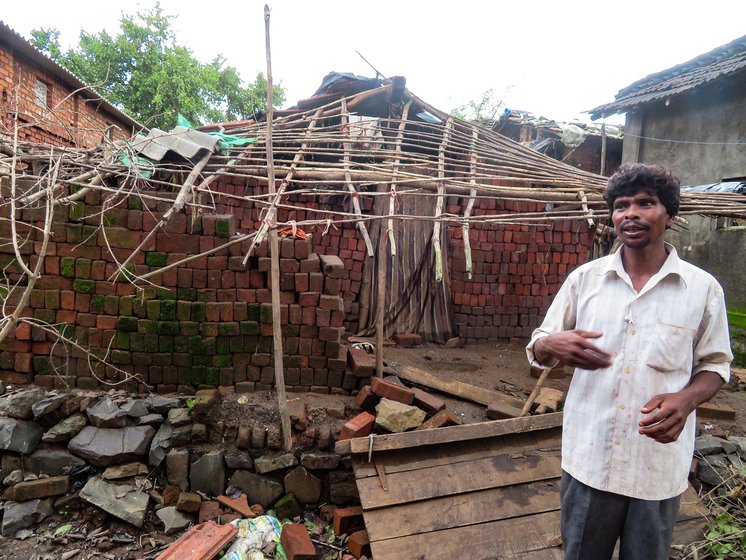 Mayuri Hileem and her brother stand in front of their house, where a wall collapsed. Right: Anil Rajkawar at the ruins of his thatched house

“Fortunately, everyone in Borande was safe. We spent two days in that warehouse. Some social workers gave us food and water to drink. When the water started receding, we returned to our houses. There was mud everywhere. One wall has collapsed,” says 32-year-old Mayuri Hileem. She works as a farm labourer from June to September, earning Rs. 150 per day, and then with her family migrates to Dahanu taluka , around 70 kilometres away, to labour at brick kilns.

“On August 3 and 4, Vada taluka received 400 mm rainfall [total] on two days. As a result, the Vaitarna river started flooding. On August 4, there was a high tide, and with the sea not taking excess water from the Vaitarna, it entered the villages near the river,” says tehsildar Dinesh Kurhade. “There was no loss of human or animal life in the taluka on those days. Our process of providing relief to all the villages is on.”

The water of the Vaitarna river is flowing quietly now. But Sakubai’s anxiety has not calmed, and she asks: “What if the river gets angry again?” 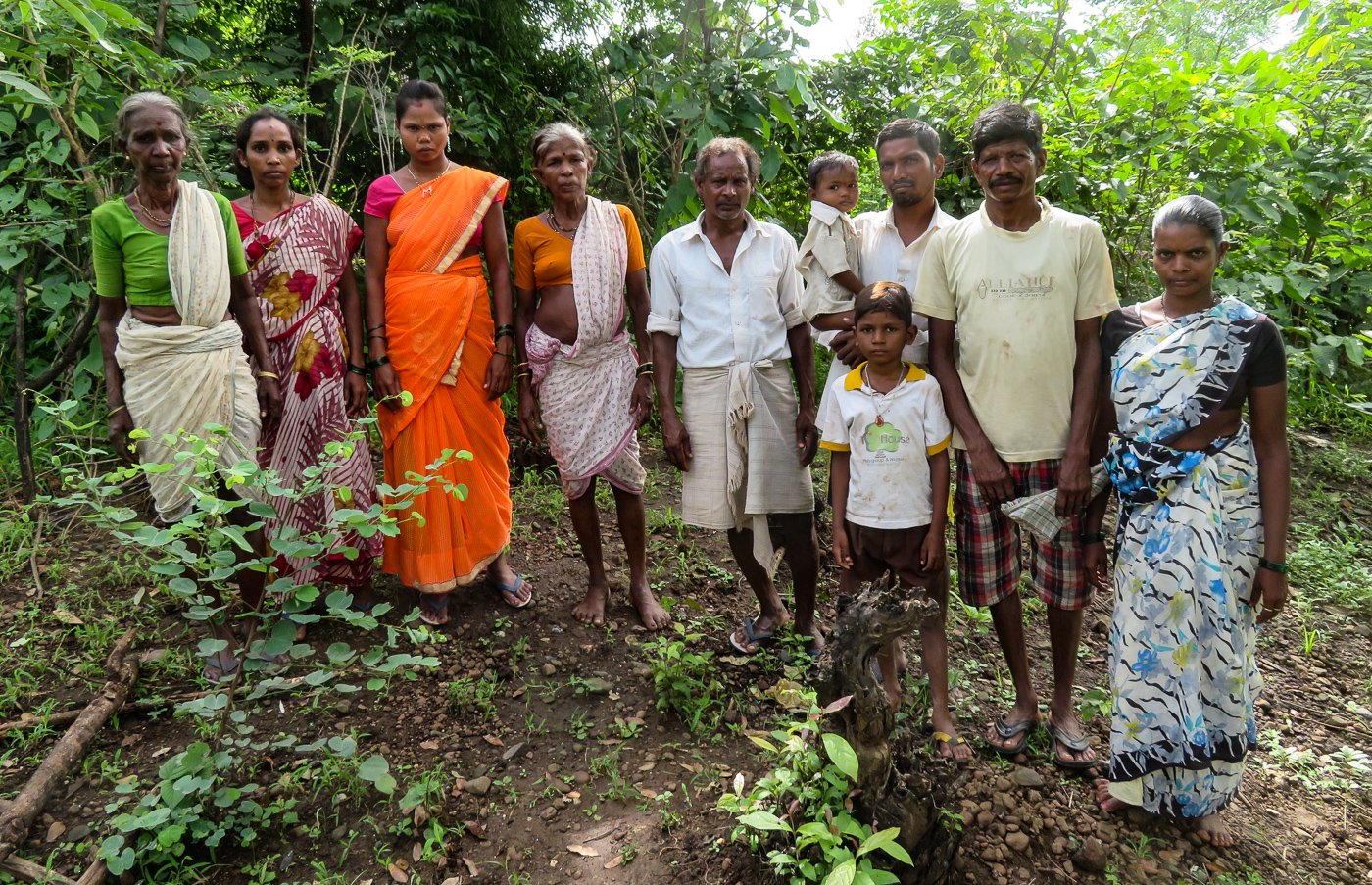 Katkati Adivasis of Gates Kh village, who lost their houses and belongings in the flood