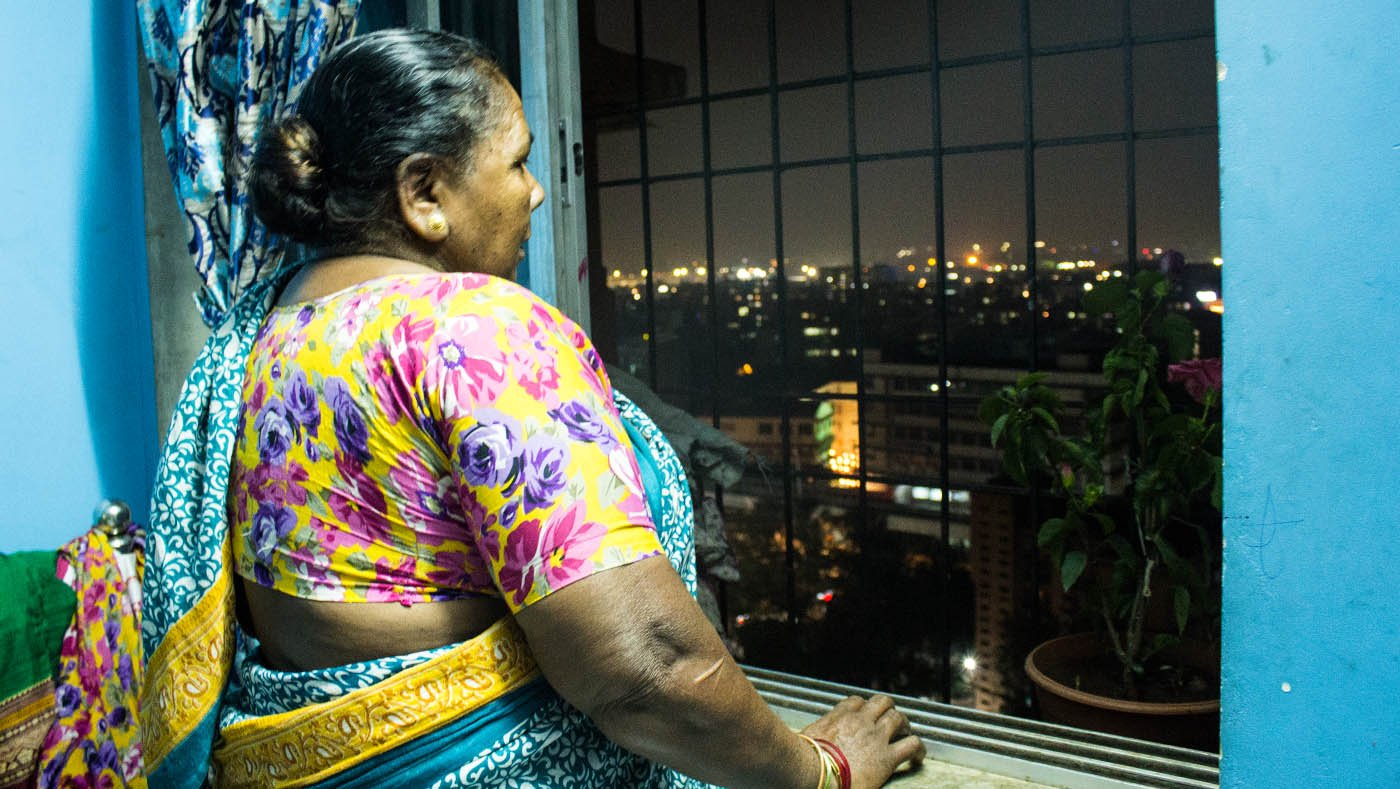 An Adivasi village within the megacity of Mumbai has been razed to make way for a Metro car depot, its inhabitants herded into matchbox-sized flats in an SRA building

"We are people who live on the soil, not on concrete tiles or inside tall buildings," says Laxmi Gayakwad. Right now, she’s sitting high above the ground – on the 12th floor, in a 269-square foot flat allocated to her in exchange for her two-acre farmland in the tribal hamlet of Prajapurpada.

"Whenever I look down, it scares me. I feel like I might fall off. We don't belong here. I am not able to walk as freely as I could in the pada ," says Laxmi, around 75 years old, with tears in her eyes.

Her tiny new ‘home’ is part of Mumbai’s Slum Rehabilitation Authority (SRA) scheme, in a building complex in Chakala in the western suburb of Andheri. It’s around 3.7 kilometres from Prajapurpada in suburban Aarey Milk Colony.

The milk colony was established by the central government in 1949 – it includes a milk factory and grazing pastures for cattle on 3,160 acres. The area has 27 Adivasi padas with a total population of over 8,000. Since the early 1990s, slums colonies too have come up here.

Gayakwad’s family is one of 70 Kokna Adivasi households – around 300 people – displaced from their pada in April 2017, when the Mumbai Metro Rail Corporation Limited (MMRC) took over the land to build a depot and sheds covering an area of 26 hectares.

The 70 families, along with around 100 families from Sariput Nagar in Aarey, were moved into a 16-floor SRA building. The SRA is a government of Maharashtra scheme, started in 1995 to rehouse families in 250-300 square feet flats in return for their slum homes. 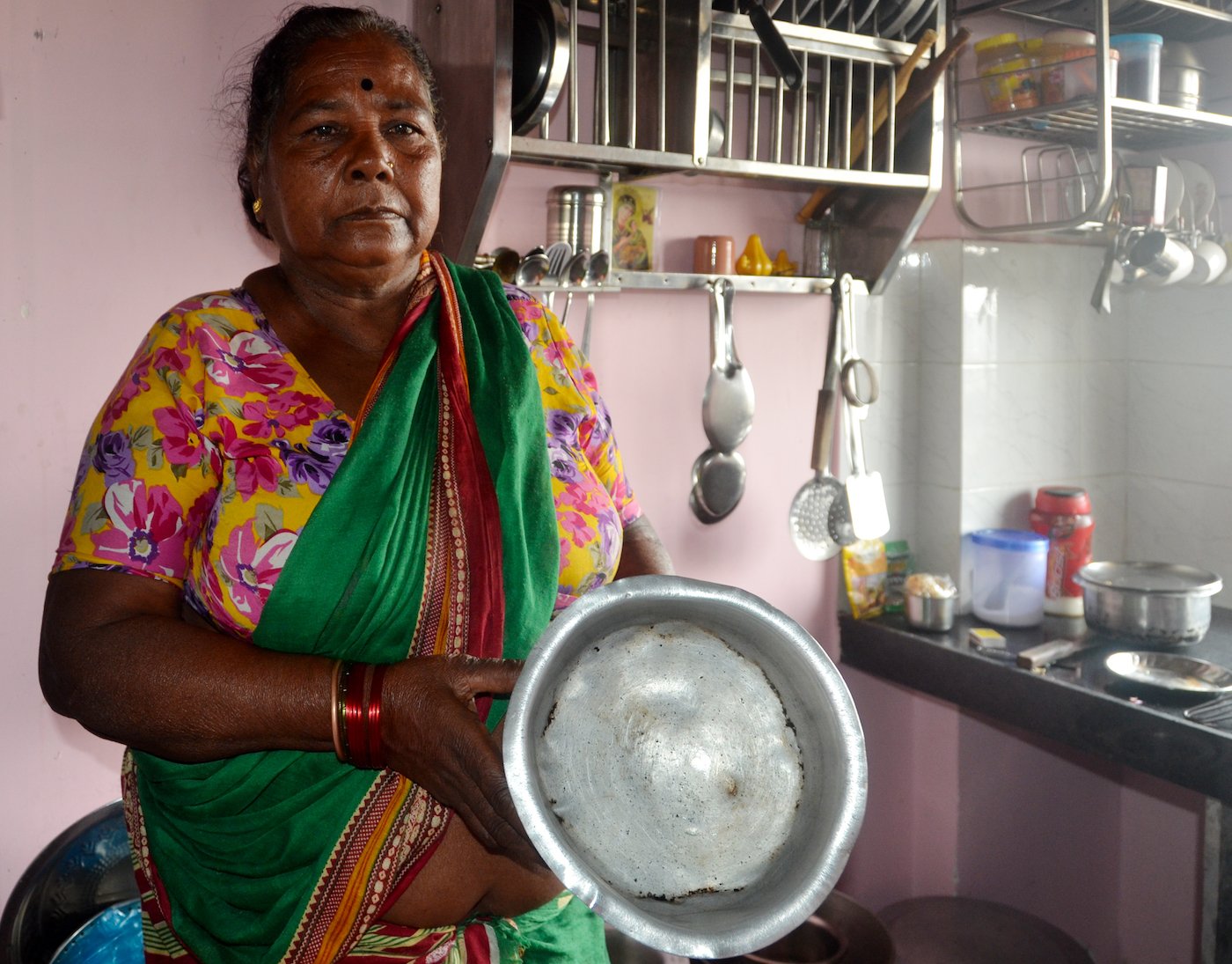 Laxmi Gayakwad's Aarey colony home was razed in front of her eyes. Her utensils and other belongings were thrown out uncaringly

A few weeks before the demolition in Aarey, the people of Prajapurpada and Sariput Nagar were given the SRA flats along with title documents. “But we [the Adivasis] were not ready to go,” says Sanjay Padavi. “So they [the police] forcefully made us vacate our houses.” Sanjay, 35, a senior manager at Union Bank, is among the displaced Kokna Adivasis. His family lost around 1.5 acres of land, where his parents cultivated vegetables such as spinach, cucumber and ridge gourd. Now they cannot – on the 5th floor of the SRA building. “Life has become difficult for us here. We like to live like free birds with nature,” says Sanjay, who moved with his parents, wife and one-year-old daughter.

When the people of Prajapurpada refused to move, in April 2017 they were given 72 hours to vacate their homes. Showing me a dented aluminium pot, Laxmi recalls the day of the demolition – April 28. “The police threw this away, they threw away my agricultural tools – axe, sickle, plough.  I had kept them with care for many years. There were many cops, guards, huge bulldozers. It was chaotic that day. I shouted a lot, I cried. But they didn’t listen. They flattened my house in front of my eyes.”

Gayakwad, originally from Dahanu taluka of Palghar district, came to Prajapurpada after getting married. She has spent all her life farming and living amidst trees, and has suffered both emotionally and physically after shifting to the SRA building. Even as the proposed construction of the Metro shed started making news in 2014, her blood pressure had spiked. With restricted physical activity in the little flat, her ankles have swollen.

Laxmi’s husband Ramji died in 2010 due to age-related illnesses. Farming on their ancestral land had been the family’s only means of sustenance. Three of Laxmi’s daughters are married. She lives with an unmarried daughter, Sangeeta. Her two sons and their families got an identical flat each in the same SRA building – they lived in separate houses in the pada too. 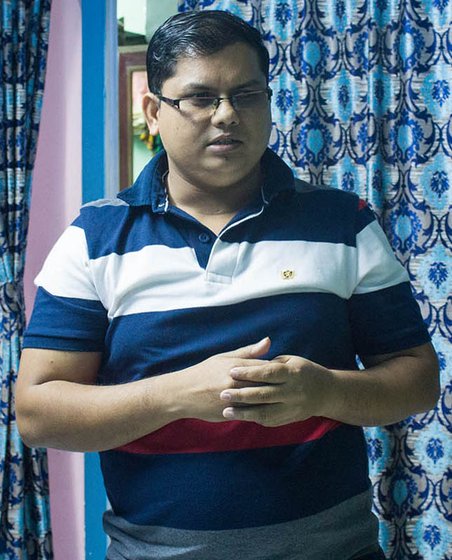 Farming was everything for them. "My brothers and I, with my mother, would work on the farm and survive on the produce we grew. We all studied only till the first standard. So we never thought of any job," says 40-year-old Sangeeta.

The family’s two-acre farm had 500 banana trees. Of these, about 150 yielded a crop each month – and would give them a total of roughly 1,800 dozen bananas, both raw and ripe. “Small vendors and traders would give us Rs. 12 to 15 per dozen, which earned us around Rs. 27,000 every month,” says Sangeeta.

The family also cultivated 10-15 kilos of seasonal vegetables such as cucumber, spinach and radish, and sold banana leaves too – which would fetch them an additional Rs. 1,000 per month. They had 20 hens, and a few regular customers who bought their eggs — which gave the family another Rs. 3,000. “We sold them all before coming here,” says Sangeeta

Their family income has dropped sharply after the eviction. Only Laxmi’s eldest son, 48-year-old Ladak, gets some work at construction sites, for a daily wage of around Rs. 300. He has six children – an elder daughter is married, another daughter works in a jewellery-assembling workshop in the nearby Seepz special economic zone. The others are in school. Laxmi’s younger son, 38-year-old Janu, has mental health problems; he and his wife, a homemaker, have two children. He manages to work for around 15 days a month at construction sites. “We are living off our savings,” says Laxmi. “Who is going to give me work at this age? What should I do? How do I survive?”

Many of the families displaced from Prajapurpada depended on cultivating seasonal fruits and vegetables, selling the produce in nearby markets in Andheri and Jogeshwari. They also harvested some tur , moong and paddy for their own use. Not only have the families lost their livelihoods and source of food, but in the SRA building they will, in the future, be required to pay Rs. 1,000 a month per flat as maintenance costs.

None of the Kokna families got any monetary compensation or ‘Project Affected Person’ (PAP) certificates, Padavi says. According to the Maharashtra Project Affected Persons Rehabilitation Act, 1999, anyone impacted by a state project should get monetary compensation. Additionally, the collector must monitor the entire rehabilitation process and issue certificates so that a member of the family can get employment against a quota reserved for PAPs. 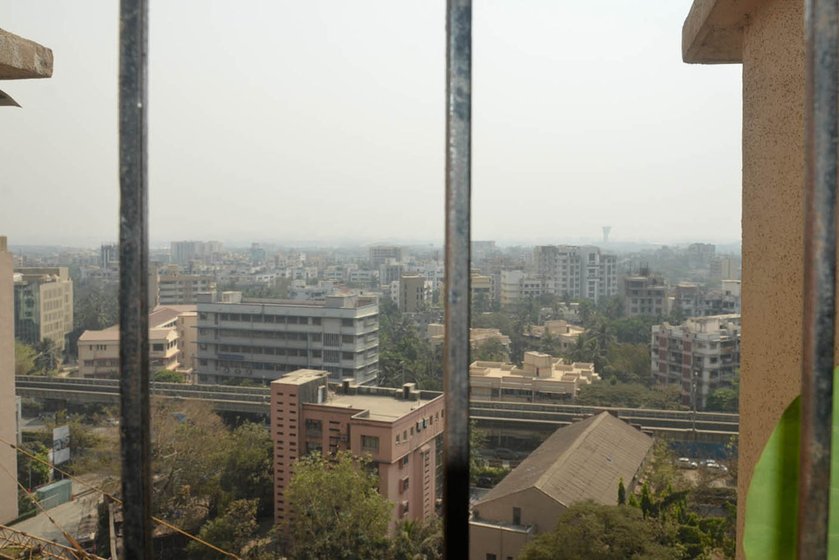 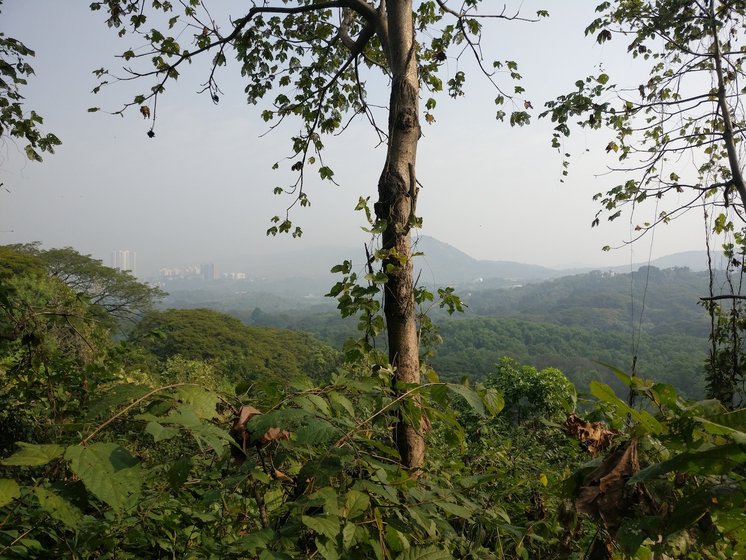 Padavi, perhaps Prajapurpada’s first graduate, says, “We haven’t received any financial resettlement for the land or trees which we lost to the demolition. They [only] verbally promised compensation.” Responding to a 2014 MMRC notice about rehousing the pada ’s residents in in SRA flats, Padavi wrote letters to the district collector, to the MMRC, and complained on the Maharashtra government’s grievance redress portal — Aaple Sarkar. They did not respond.

“We are not slum dwellers,” he says. “We are the original inhabitants of Aarey forest. Our ancestors lived here when Aarey Milk Colony was not even established. We are indigenous people and our rights are protected under the Forest Rights Act of 2006. MMRCL has not even considered Mumbai Urban Transport Project policy [of the year 2000], which has a separate development plan for us. MMRCL is asking us to provide proof of residence and the saat/bara land record if we want compensation.”  (The saat/bara or 7/12 document is an extract from the revenue department’s land register, like a patta or title deed; it’s hard for the Adivasis to obtain since, once the milk colony came up, they cultivated the land on lease from the Aarey authority).

Repeated queries from PARI drew promises of a response from the MMRC. Weeks later, however, that response remained in abeyance. In a newspaper report , MMRC has said the pada communities don’t have documents proving their indigenous status. “When we asked them for documents proving that the land is in their possession, they could not produce those. The Forest Rights Act is very clear about the guidelines. Their structures were on government land and we had to vacate it,” the report quotes an MMRC official  as saying. 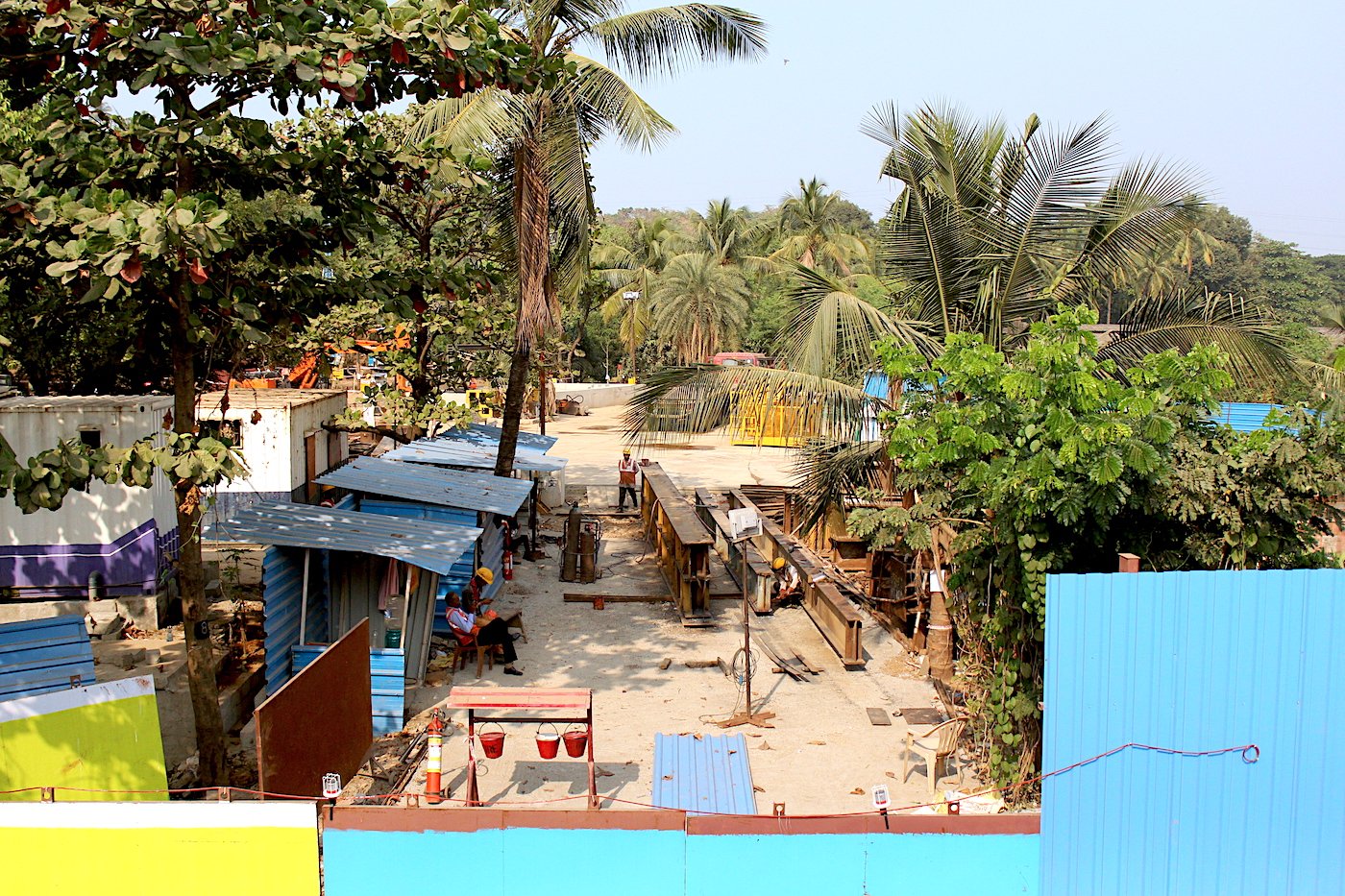 Construction work is on at the site of the metro car shed, where Prajapurpada's 70 families once lived

The people of Aarey find their eviction and ‘rehabilitation’ absurd. Prakash Bhoir, 46, a maintenance worker on BEST staff buses, who lives in Keltipada, around a kilometre from the demolished Prajapurpada, says, “We are Adivasis [he is a Malhar Koli]. This land is a source of income and survival for us. Can we do cultivation in those high-rise buildings? We just cannot live without soil and trees.”

In 2016, the Bombay High Court restrained the state government from implementing the SRA scheme in the 27 Aadivasi hamlets without the court’s permission. This followed a public interest litigation filed by a local non-governmental organisation, after the hamlets received notices from the municipal corporation of a survey to assess their eligibility for the SRA scheme. “MMRCL has violated the HC order. The rights of Adivasis are being denied to them,” says Stalin Dayanand, environmentalist and director of the Mumbai-based NGO Vanashakti. In October 2017, his organisation filed a petition at the National Green Tribunal, which states that Aarey is a forest where no development activity should take place, and the rights of its Adivasis should be protected. The outcome of this petition is awaited.

Padavi is now planning to file a case in the high court. “Maybe then the government will pay attention to us,” he says.  Meanwhile, from her grilled window, a woeful Laxmi can see other high-rise buildings and the already-running Metro-1. There is no open space close by where she might have kept her 20 hens running around. Only a dim common corridor with seven other flats. And a small pot with hibiscus and green taro on the window sill.