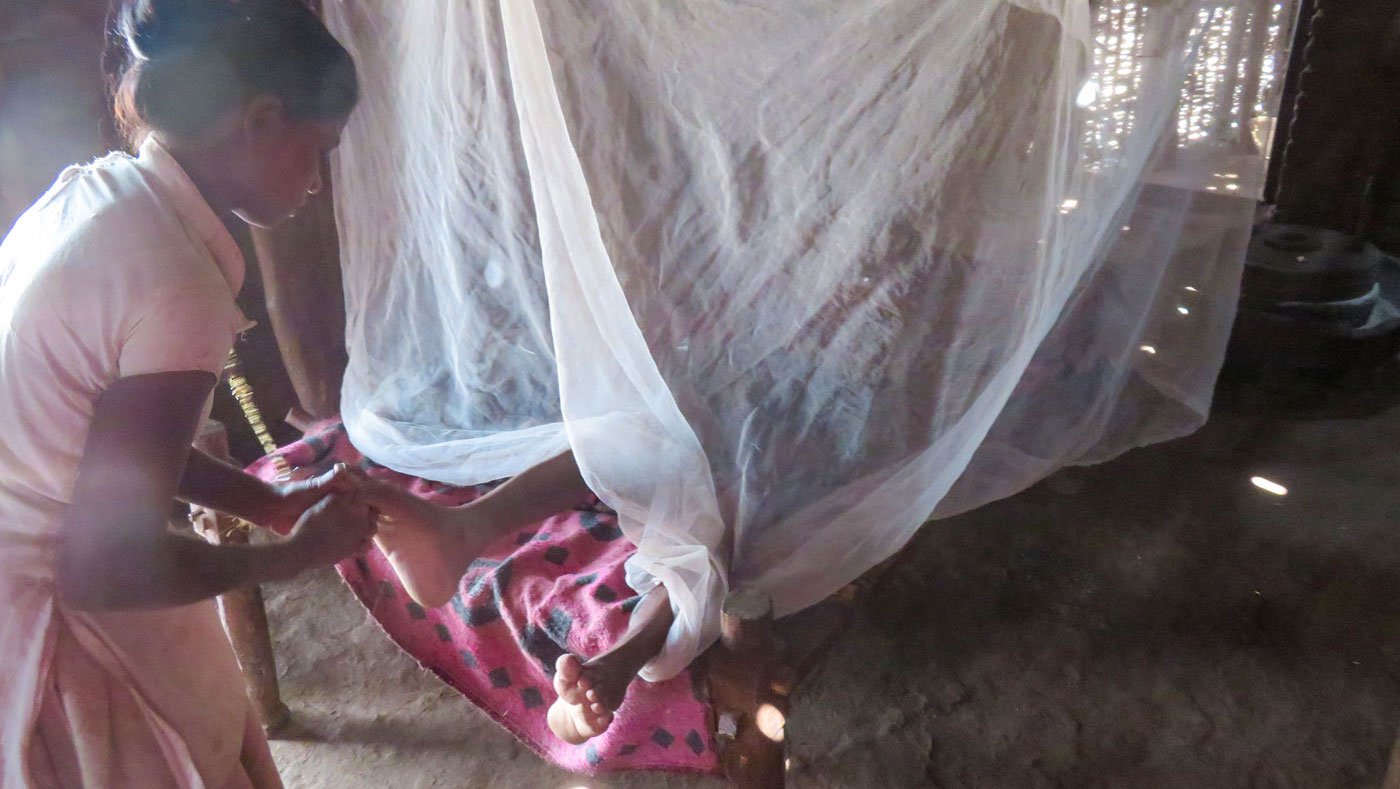 In Nandurbar’s hilly hamlets: a vaccine too far

For Adivasis in remote hamlets of Maharashtra's Dhadgaon tract, Covid vaccination centres are inaccessible due to poor connectivity and costs, and even elders with severe illnesses are still waiting

Kehalya Vasave was groaning in his sleep, restless and in pain, as he lay on his back on a charpai covered with a mosquito net. Seeing his discomfort, his 18-year-old daughter Leela began massaging his feet to try and give him some relief.

For months now, he has remained on that cot all day – a wound on his left cheek and a feeding tube in the right nostril. “He doesn’t move much or even talk. The wound hurts,” says his wife, 42-year-old Pesri.

On January 21 this year, 45-year-old Kehalya was diagnosed with cancer of the inner cheek cancer (buccal mucosa) at Chinchpada Christian Hospital in northwestern Maharashtra’s Nandurbar district

His illness – cancer – was one of the 20 comorbidities listed in the Ministry of Health and Family Welfare’s guidelines for vaccine eligibility in the 45 to 59 age group, in the second phase of Covid-19 vaccination in India that began on March 1. These guidelines say that vaccination is open “for citizens of age-appropriate categories, including initially the people above 60 years of age and those aged from 45 years to 60 years and have the comorbidities.” (From April 1, vaccination opened for everyone above 45 years, with or without any comorbidity).

But age brackets, comorbidity lists or expanded eligibility mean little to Keshalya and Pesri. The Vasave family – they belong to the Bhil community, a Scheduled Tribe – is just not able to access the vaccine. From Kumbhari, their hamlet in Akrani taluka , the nearest vaccination centre, Dhadgaon Rural Hospital, is 20 kilometres away. “We have to walk. No other option,” says Pesri. 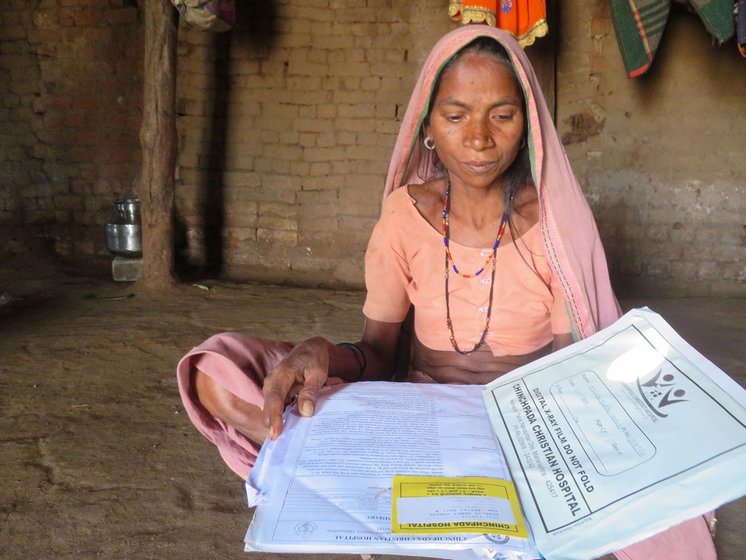 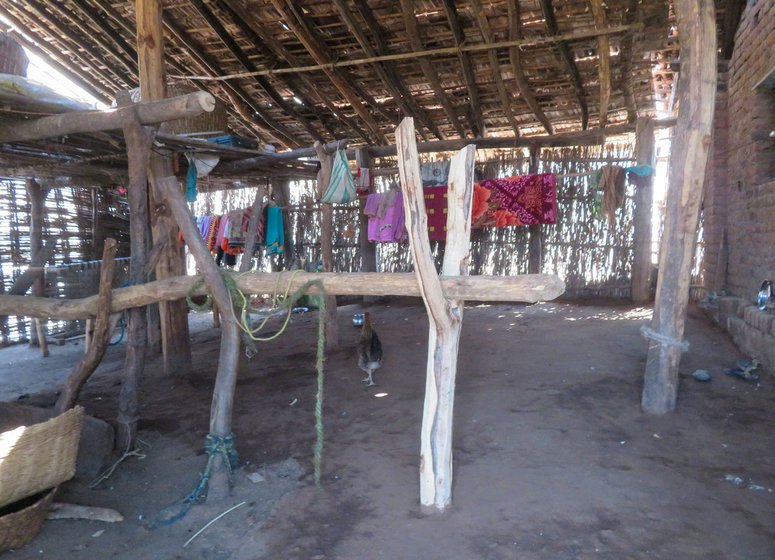 From Kumbhar hamlet, the nearest vaccination centre is 20 kilometres away. 'We have to walk. No other option', says Pesri, who sold all the family's animals for her husband's cancer treatment (the wooden poles they used to be tied to are on the right)

It is a four-hour walk across uphill and downhill pathways. “Carrying him in a bamboo-and-bedsheet doli [makeshift stretcher] to the centre is not possible,” says Pesri, sitting on the steps of her mud house in the hilly terrain of the predominantly Adivasi district of Nandurbar.

“Can’t the government give us the injection here [at the local PHC, primary health centre]? We could go there,” Pesri says. The nearest PHC, at Roshamal Kh. village, is roughly five kilometres away from their house.

State transport buses don’t ply within the hilly Dhadgaon region that comprises Akrani taluka , with 165 villages and hamlets, and a population of around 200,000. From the depot near the Dhadgaon Rural Hospital, buses go to other parts of Nandurbar and beyond. “There is no infrastructure here,” says Ganesh Paradke, a member of Nandurbar's Zilla Parishad.

People usually rely on shared jeeps, but these are infrequent and cost Rs. 100 per person for a two-way journey anywhere within the region – from one village to another, to the market, to the bus stand.

Pesri and her family cannot afford this fare. She sold the family’s entire livestock to a farmer in the region – one bull, eight goats, seven hens – for Kehalya’s diagnosis and initial treatment. The space with wooden poles in their mud house where she kept her animals tied is now deserted.

In early April 2020, Kehalya had noticed a lump on his left cheek. But the fear of Covid meant the family resisted seeking medical help. “We were scared to visit the hospital due to corona. We went to the private hospital this year [in January 2021, to the Chinchpada Christian Hospital in Navapur taluka] because the lump was getting bigger and more painful,” says Pesri. 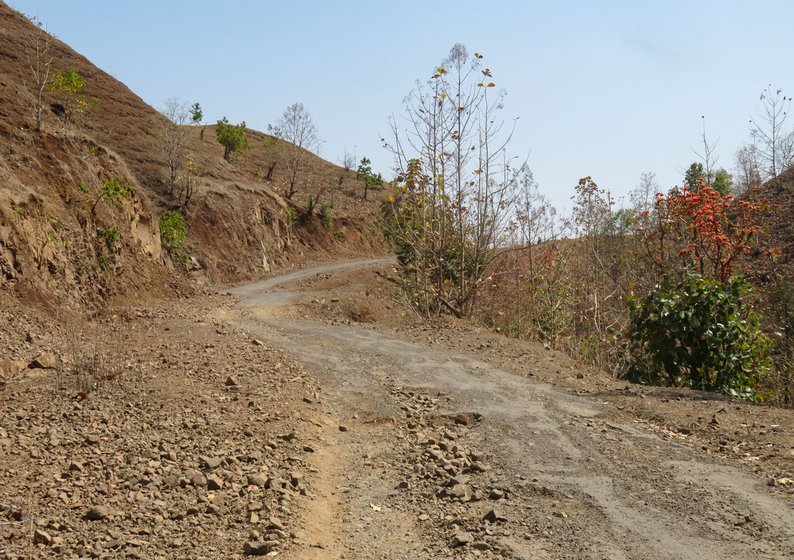 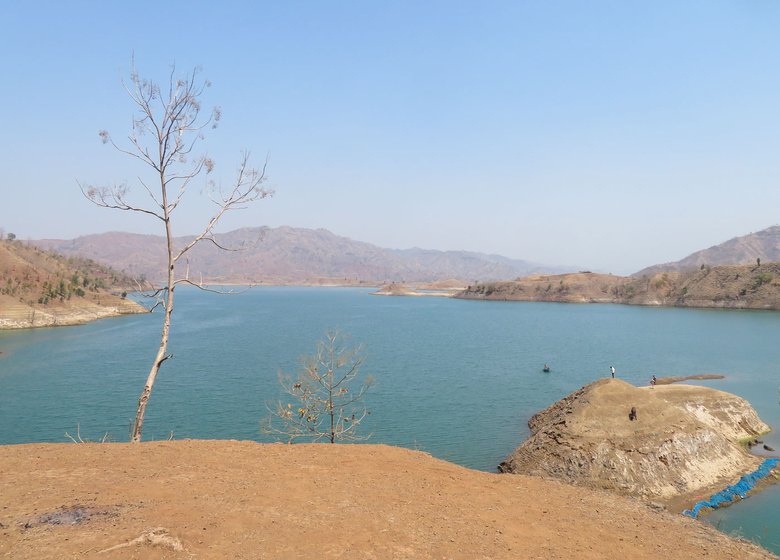 State transport buses don’t ply within the hilly Dhadgaon region of 165 villages and hamlets, and the Narmada river flowing through. People usually rely on shared jeeps, but these are infrequent and costly

“I sold all the animals for 60,000 [rupees]. Instead of a government hospital, we thought in a big [private] hospital they would give better treatment. We thought we would have to spend money but would get good treatment. The doctor there has said a surgery is necessary, but now we don’t have the money,” she adds.

Her eight-member family includes their daughter Leela, eldest son Subas, who is 28, his wife Suni and their two infant children, and Pesri’s youngest son, 14-year-old Anil. The two or three quintals of jowar the family cultivates for their own meals on one acre of steep slopes during the monsoons, say Pesri, “isn’t enough. We have to go outside [for work].”

So every year, she and Kehalya used to migrate after the October harvest, and go to to Gujarat to work on cotton fields. This brought them a daily wage of Rs. 200 to 300 each for roughly 200 days a year from November to May. But this season, with the pandemic, the family remained in their hamlet. “And now he is bed-ridden, and virus is still out there,” Pesri says.

Kumbhari, their hamlet, has a population of 660 (Census 2011). Sunita Patle, the 36-year-old ASHA facilitator, says her records show that Kehalya is the only resident with cancer in the 10 hamlets she covers, including Kumbhari. She estimates their total population is around 5,000, and adds, “We have some 50 men-women above 45 years with sickle cell disease [red blood cell disorders, listed among the 20 comorbidities in the guidelines] and around 250 persons are above 60.”

The lack of transportation and poor road connectivity mean that none of them are able to visit Dhadgaon Rural Hospital for the vaccine. “We are spreading awareness by visiting each house that vaccination has started,” Sunita says, “but it is very difficult to reach the centre.”

The Nandurbar Vaccination Report prepared by the district’s heath department shows that as on March 20, there were 99 citizens above 60 years who received the first vaccine dose at Dhadgaon Rural Hospital, as did one person in the 45 to 60 years with comorbidities.

Vaccination centres set up in urban or semi-urban areas of the district – which has recorded over 20,000 positive cases since March 2020 – have fared somewhat better: at the sub-divisional hospital in Taloda, around 45 kilometres from the Dhadgaon hospital, 1,279 people above 60 received the first dose (till March 20), as did 332 with comorbidities. 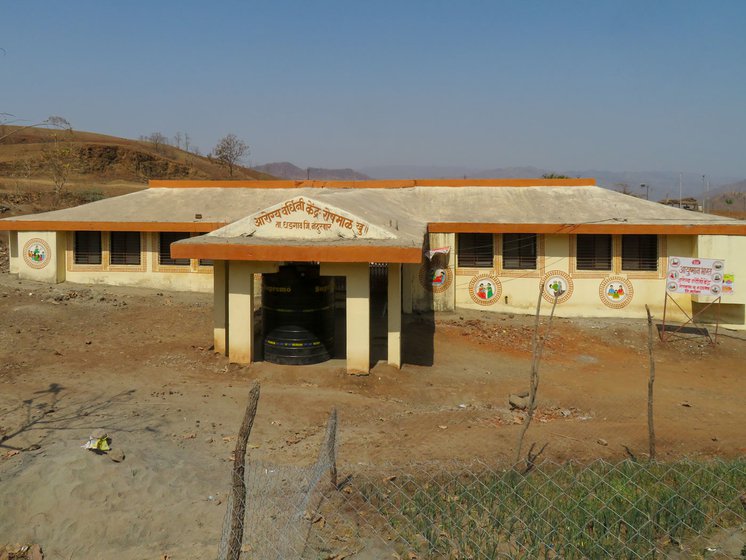 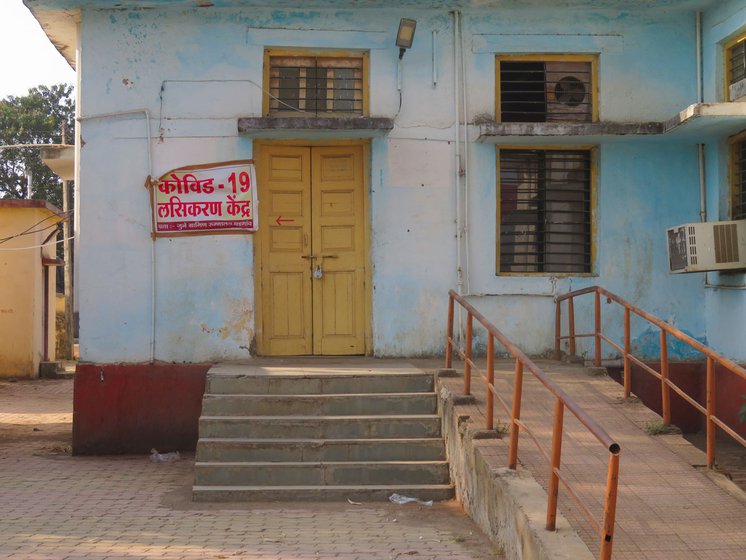 Left: The Roshamal Kh. PHC is between 5-8 kilometers from the hamlets: 'Can’t the government give us the injection here [at the local PHC]?' people ask. Right: Reaching the nearest Covid vaccination center in Dhadgaon Rural Hospital involves walking some 20 kilometres across hilly terrain

“The response to vaccination in inaccessible tribal areas is poor,” says Dr. Nitin Borke, Nandurbar District Medical Officer. “The lack of road connectivity in Dhadgaon is a big issue. Villages and hamlets here are at a great distance from the vaccination centre.”

Among those remote hamlets is Chitkhedi, some 10 kilometres from Pesri’s place, on the banks of the Narmada river. From Chitkhedi the vaccination centre in Dhadgaon Rural Hospital is more than 25 kilometres away.

In this hamlet, 85-year-old Sonya Patle, who suffers from Parkinson’s disease (a brain disorder that leads to shaking, stiffness and difficulty with walking, balance and coordination), is lying on a charpai blaming his fate. “What sin have I committed that god has given me this disease," he shouts, weeping. Bubali, his wife, sitting near the cot on ground plastered with cowdung, wipes his eyes with a grey-chequered napkin. Her husband has spent 11 years with this illness in their bamboo hut perched on a high hill in Chitkhedi.

The family belongs to the Bhil community of Adivasis, and Sonya and Bubali are in the age bracket that is eligible for the vaccine. But, says 82-year-old Bubali, “We both are old and he is bedridden. Why should we be happy about the vaccine when we can’t walk to get one?”

The two depend on their 50-year-old son Hanu and daughter-in-law Garji’s earnings – they live with them, along with their six kids, in the small bamboo hut. “Hanu bathes him [his father], takes him to the toilet, lifts him, takes care of him,” Bubali says. Their four other married sons and three married daughters live in other hamlets. 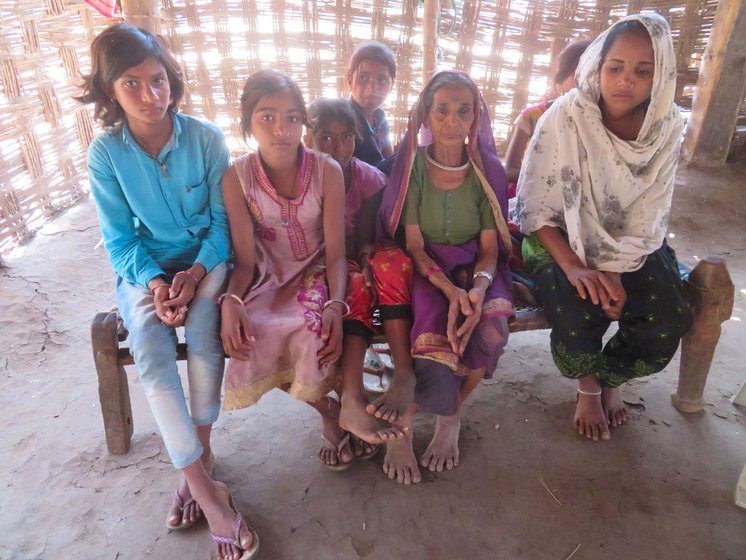 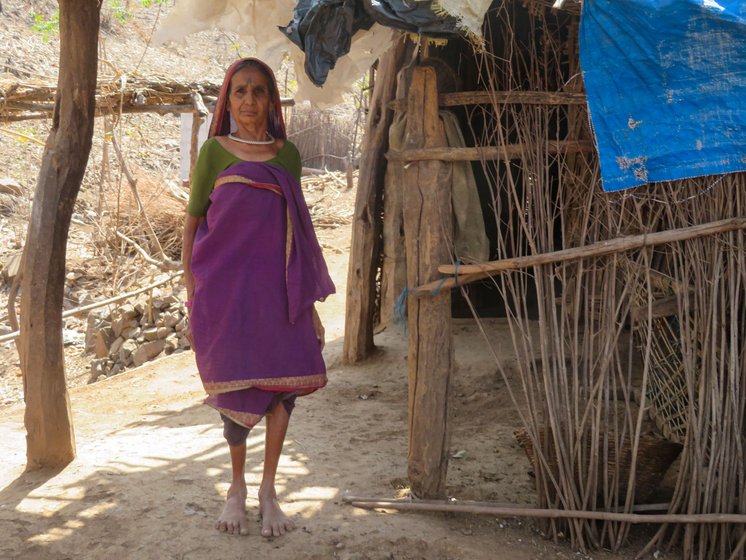 Bubali, 82, with her grandkids in the remote Chitkhedi hamlet. She and her husband are in an age bracket eligible for the vaccine, but, she says, 'Why should we be happy about the vaccine when we can’t walk to get one?'

Hanu and Garji catch fish from 9 a.m. to 2 p.m. three days of the week in the Narmada river. “A trader comes to our hamlet thrice a week. He pays rupees 100 for a kilo [of fish],” says Garji. With a catch of 2-3 kilos thrice a week, they earn around Rs. 3600. On the other days, Hanu does cleaning-washing jobs at eateries in Dhadgaon, earning Rs. 300 a day, and Garji manages to earn Rs. 100 with agricultural labour. “In a month, both of us get work for 10-12 days a month, sometimes not even that,” she says.”

So even hiring a private vehicle for Rs. 2,000 to take Dolya and Bubali to the vaccination centre would be a huge additional expense.

“Maybe that injection is good for us. But I can’t walk that long at this age,” Bubali adds. She is also worried about Covid-19 if they visit a hospital “What if we get infected with corona? We won’t go, let the government come to our house.”

One another hillock in the same hamlet, 89-year-old Dolya Vasave, sitting on a wooden platform in his front yard, echoes the same fears. “If I go [to get the vaccine], it will only be in a gaadi [four-wheeler], otherwise I won’t go,” he says firmly.

His vision is fading, and he is unable to recognise things around him. “There was a time when I would walk easily through these up and down these hills,” he recalls. “Now I don’t have that much energy and can’t see clearly.” 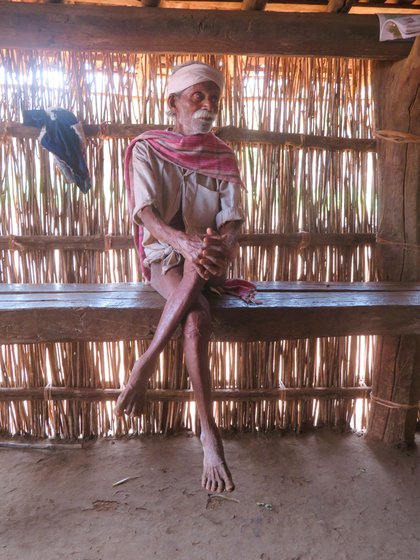 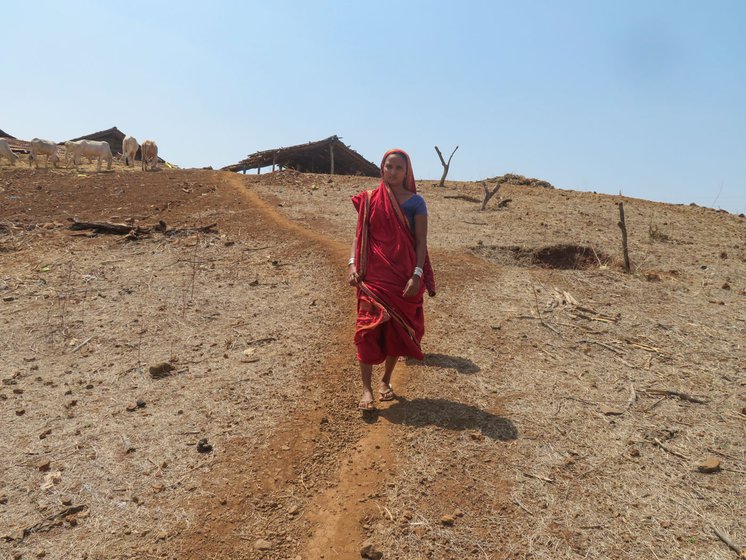 Left: Dolya Vasave, 89, says: 'If I go [to get the vaccine], it will only be in a gaadi , otherwise I won’t go'. Right: ASHA worker Boji Vasave says, 'It is not possible for elders and severely ill people to cover this distance on foot, and many are scared to visit the hospital due to corona'

Dolya’s wife Rula died long ago, when she was 35, due to complications during childbirth. He raised three sons alone, they all live in their own huts in a nearby hamlet. His 22-year-old grandson, Kalpesh stays with him and looks after him, and depends on fishing for an income.

In Chitkhedi, there are 15 residents above 60, including Dolya, Sonya and Bubali, says Boji Vasave, the 34-year-old ASHA worker of the hamlet. None of them had visited a vaccination centre when I visited in mid-March. “It is not possible for elders and severely ill people to cover this distance on foot, and many are scared to visit the hospital due to corona,” says Boji, whose work covers a population of 527 in the 94 households of Chitkhedi.

To overcome these issues and improve the turnout, the Maharashtra Health Department is reportedly planning to allow vaccination in PHCs. But this will be possible only in areas with internet coverage, says Dr. Nitin Borke: “Vaccination centres need internet connectivity, computers, printers to register details of the on-site beneficiary on the CoWIN platform and to generate QR code-based vaccination certificate.”

Hamlets like Chitkhedi and Kumbhari, in the interiors of Dhadgaon region, barely have mobile networks. So the PHCs in or near these hamlets have no network either. “There isn’t any mobile network available to even make calls, getting internet access is impossible here,” says Dr. Shivaji Pawar of the Roshamal PHC.

Pesri though is resigned to these hurdles. “Nobody wants to come here. And anyway it [the Covid vaccine] is not going to cure his [Kehalya’s] cancer,” she says. "Why would doctors come here, in these remote hills, to serve us, give us medicines?”