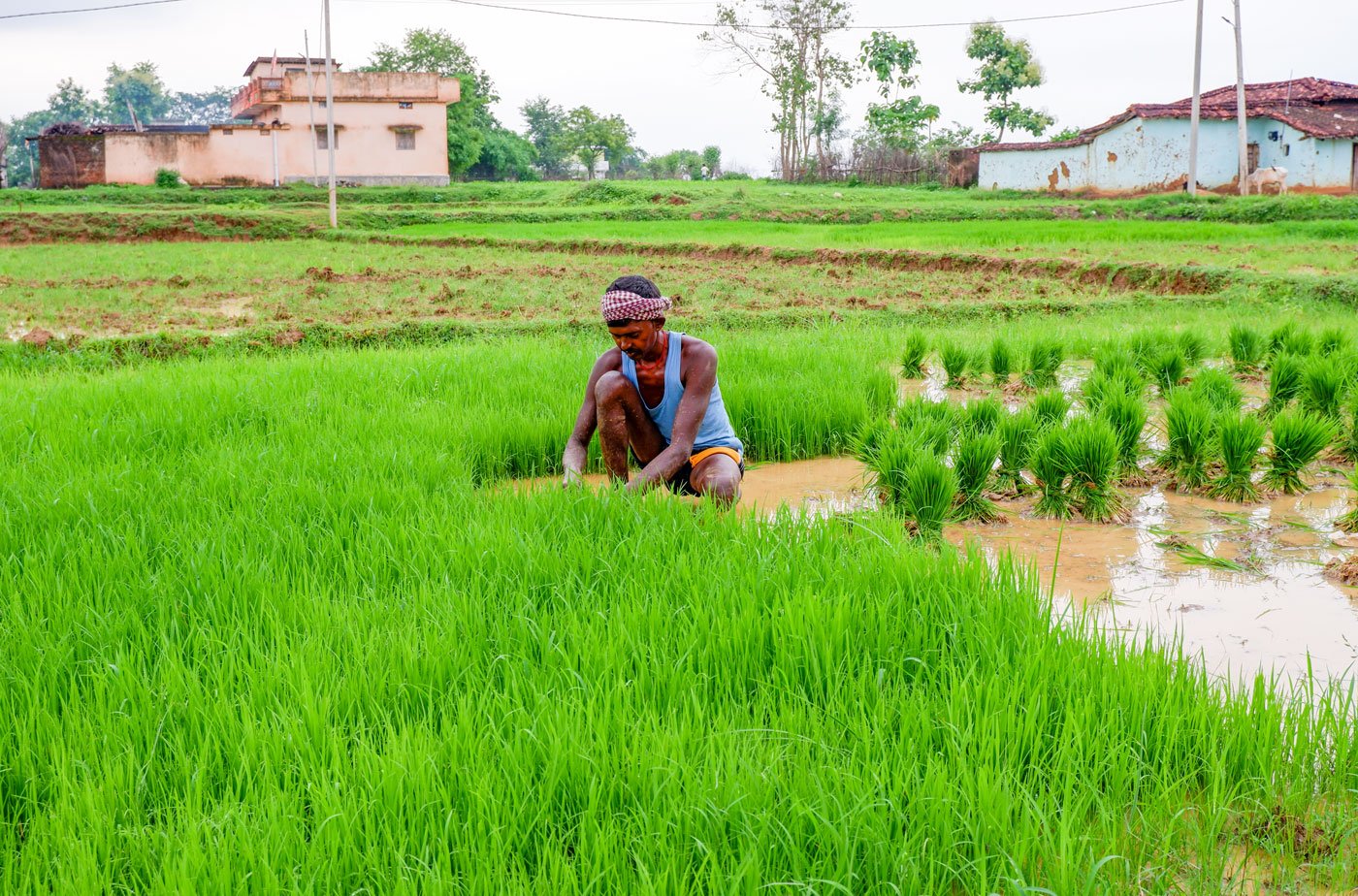 In Jharkhand's Palamu, too many leases on life

With their brick kiln work cut short due to the lockdown, rations running out and piling debt, Teera and Anita Bhuiya are desperate for a good upcoming harvest on the two acres they cultivate under a 'batiya' contract

Teera and Anita Bhuiya are desperately counting on a good yield during this kharif season. They have planted paddy and some maize, and the time to harvest the crops is coming up.

A good yield this time is even more critical for them because the work they do at a brick kiln for half the year was cut short due to the lockdown that started in March.

"Even last year I had tried farming, but the crops were damaged due to insufficient rain and pests,” Teera says. “We farm for nearly six months, but it does not give us any money in hand,” Anita adds.

Teera, 45, and Anita, 40, live in Bhuiya Tadhi, a cluster of houses of the Bhuiya community – a Scheduled Caste – in the southernmost part of Mahugawan.

In this village in Chainpur block of Jharkhand’s Palamu district, since 2018, the family has been leasing land on a batiya arrangement – a local term for tenant farming – every kharif season. Through this verbal contract, tenants and landowners each invest half of the cost of production, and they each receive half of the harvest. The tenant farmers usually keep most of their share for their own consumption, and at times try to sell some in the market. 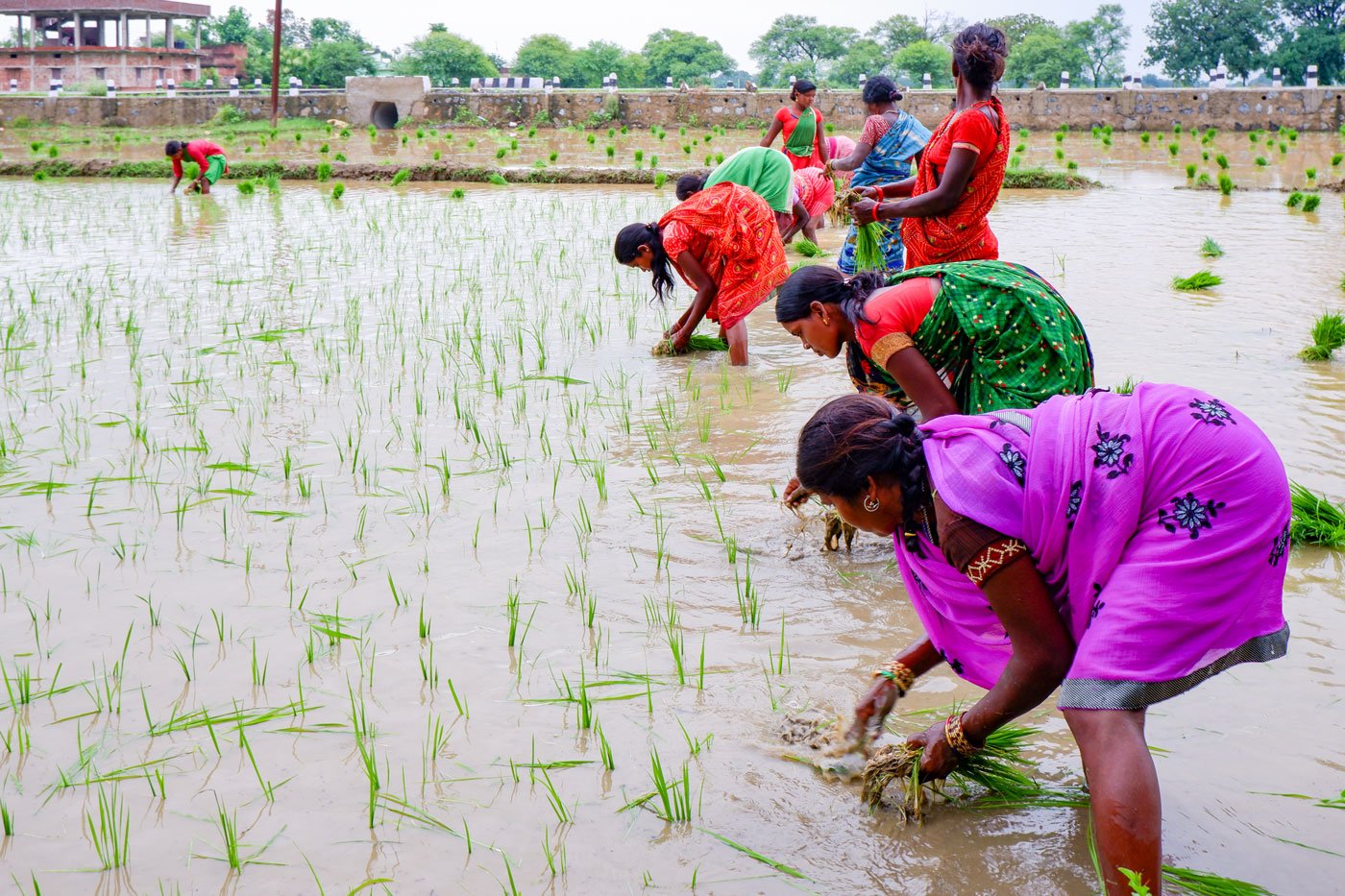 'We farm for nearly six months, but it does not give us any money in hand', says Anita Bhuiya (foreground, in purple)

Until around five years ago, the family worked as farm labourers – earning Rs. 250-300 as daily wages for around 30 days of work in each of the two sowing seasons, or receiving grains as payment. The rest of the time, they would seek work at vegetable plots, or as daily wage labourers in nearby villages and in Daltonganj town, roughly 10 kilometres from Mahugawan.

But with available field labour days falling every year, in 2018 they decided to try their luck at farming – and entered into a batiya agreement with a landowner. "Before this,” says Teera, “I would do harwahi for landlords” – ploughing land using oxen, and other farm labour. “But then everything started happening using tractors – ploughing, harvesting – everything. Only one ox remains in the village.”

To further try and supplement their batiya cultivation, Teera and Anita started working at a brick kiln from 2018, where others from their village go from late November-early December to mid-May-early June. “We got our daughter married last year,” Anita says. They have two daughters; the younger one, unmarried, lives with them. Three days after the wedding on December 5, 2019, the family started working at the kiln. “Once we pay off the debt [taken for the wedding expenses], we will resume working in farms through the year,” she adds.

Before the lockdown that began towards the end of March, Teera and Anita – along with their sons Sitendar, 24, and Upendar, 22, and others from Bhuiya Tadhi – would board a tractor every morning and travel eight kilometres to Burhibir village. There, they would work from 10 a.m. to 5 p.m. in the winter months till February, and from 3 a.m. to 11 a.m. from March onwards. “The only good thing about it [working at the kiln] is that the whole family works in one place,” says Anita. 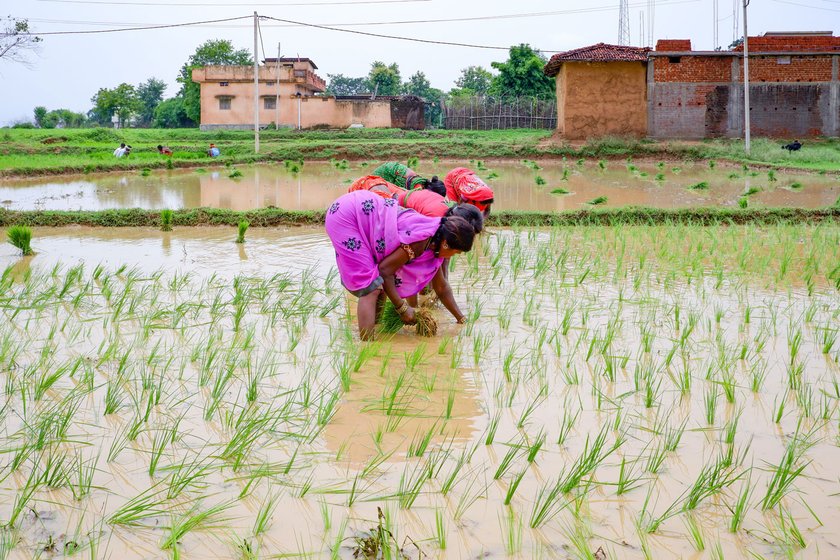 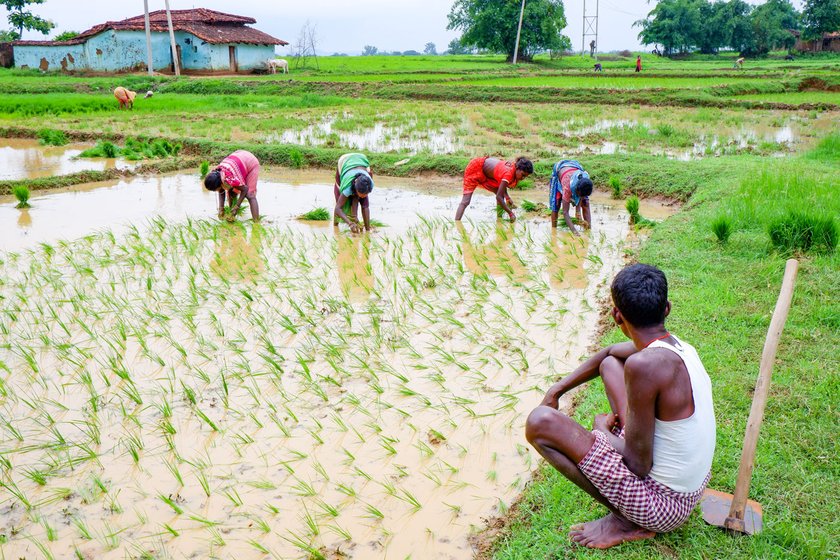 With daily wage farm labour decreasing every year, in 2018, Anita and Teera Bhuiya leased land on a batiya arrangement

At the brick kiln, they are paid Rs. 500 for every 1,000 bricks made. This kiln season, they had to work off an advance of Rs. 30,000 borrowed from the contractor, who is from their village, around October 2019.  For another Rs. 75,000 borrowed for their daughter’s wedding from the contractor as no-interest advance, they are expected to labour at the kiln starting again from November 2020.

At the kiln Teera, Anita and their sons receive a weekly allowance of Rs. 1,000 “with which we buy rice, oil, salt, and vegetables,” says Teera. “If we need more money, we ask the contractor and he gives it to us.” This weekly allowance, the small borrowings, and the bigger advance are all deducted – as is the wage system at kilns – from the final amount paid to the labourers for the total number of brick they make during their months at the kiln.

Last year, when they returned in early June 2019, they came back with Rs. 50,000 in hand, which saw them through some months. But this time, the Bhuiya family’s brick work was cut short due to the lockdown. And by the end of March, they got just Rs. 2,000 from the contractor.

Since then, the Bhuiya family, like many others from their community, has been seeking a source of income. Some relief came in the form of around five kilos of rice and one kilo of dal for each adult family member in April, May and June under the Pradhan Mantri Garib Kalyan Yojana. And on their Antyodaya Anna Yojana ration card (for the “poorest of the poor” in the classification of the Department of Food & Public Distribution), the family gets 35 kilos of grain at subsidised rates every month. “This is not enough for my family for even 10 days,” says Teera. Besides him and Anita and their two sons and one daughter, the household includes their two daughters-in-law and three grandchildren.

With their rations running out, they have been managing by doing odd jobs in Mahugawan and neighbouring villages, and by borrowing money. 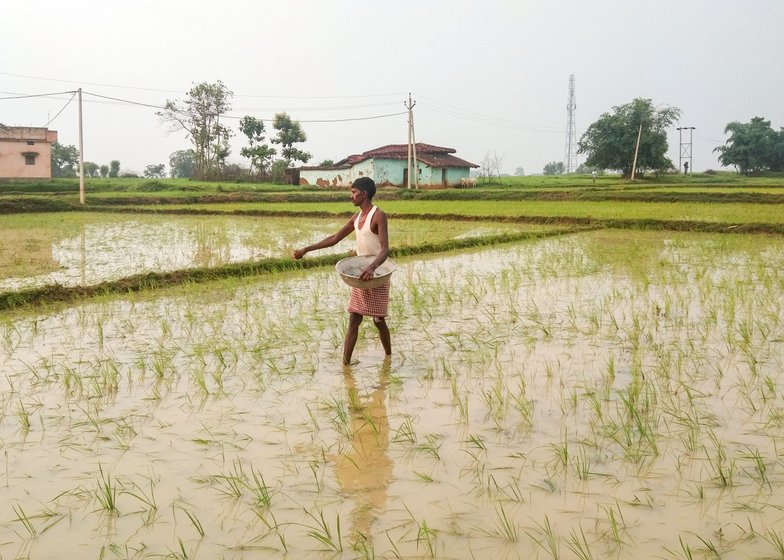 For the kharif sowing this year, Teera and Anita estimate they spent over Rs. 5,000 on seeds, fertilisers and pesticides, to cultivate rice and some maize on two acres of leased farmland. “I didn’t have any money,” says Teera. “I have borrowed from a relative, and now there is a lot of debt on my head.”

The land they are cultivating belongs to Ashok Shukla, who owns 10 acres, and he too has been facing losses for over five years, largely due to insufficient rainfall. “We used to cultivate [enough] grains to last 18 to 24 months,” Ashok recalls. “Nowadays, our kothi [store room] is empty within six months. I have cultivated for almost 50 years. But the last 5-6 years have made me realise that there is no future in agriculture – there is only loss.”

Shukla says that even landowners in the village – most of them from upper caste communities – have increasingly been migrating to towns and cities in search of other jobs. Due to the falling yields, they prefer leasing their land out on batiya instead of hiring farm labourers at Rs. 300 a day. “In the whole village, you will rarely find them [upper caste landowners] doing agriculture by themselves now,” says Shukla. “They all have given their land to Bhuiyas or other Dalits.” (In Mahugawan, between 21 and 30 per cent of the village’s 2,698 people belong to Scheduled Castes, notes Census 2011.)

This year though the rainfall has been good. So Teera is hoping their batiya harvest will be robust too. A good harvest would mean a total of 20 quintals of paddy on their two acres, he estimates. After separating the husk from the grain, and splitting the yield with Ashok Shukla, they will be left with around 800 kilos of rice – and it will be the mainstay of all the meals for Teera’s 10-member family, who have no regular aces to other foodgrains. “I wish I could sell it in the market,” says Teera, “but the dhan [grain] will not be enough for us for even six months.”

Teera says he knows farm work better than any other, and with more landowners willing to lease their land, he hopes to cultivate a wider variety of crops on larger tracts.

For now, he and Anita are hoping the harvest in a few weeks will be plentiful.

Ujwala P. is a freelance journalist based in Bengaluru, and a graduate of the Indian Institute of Mass Communication (2018-2019), New Delhi.

Ashwini Kumar Shukla is a freelance journalist based in Mahugawan village, Palamu, Jharkhand, and a graduate of the Indian Institute of Mass Communication (2018-2019), New Delhi.

Other stories by Ashwini Kumar Shukla