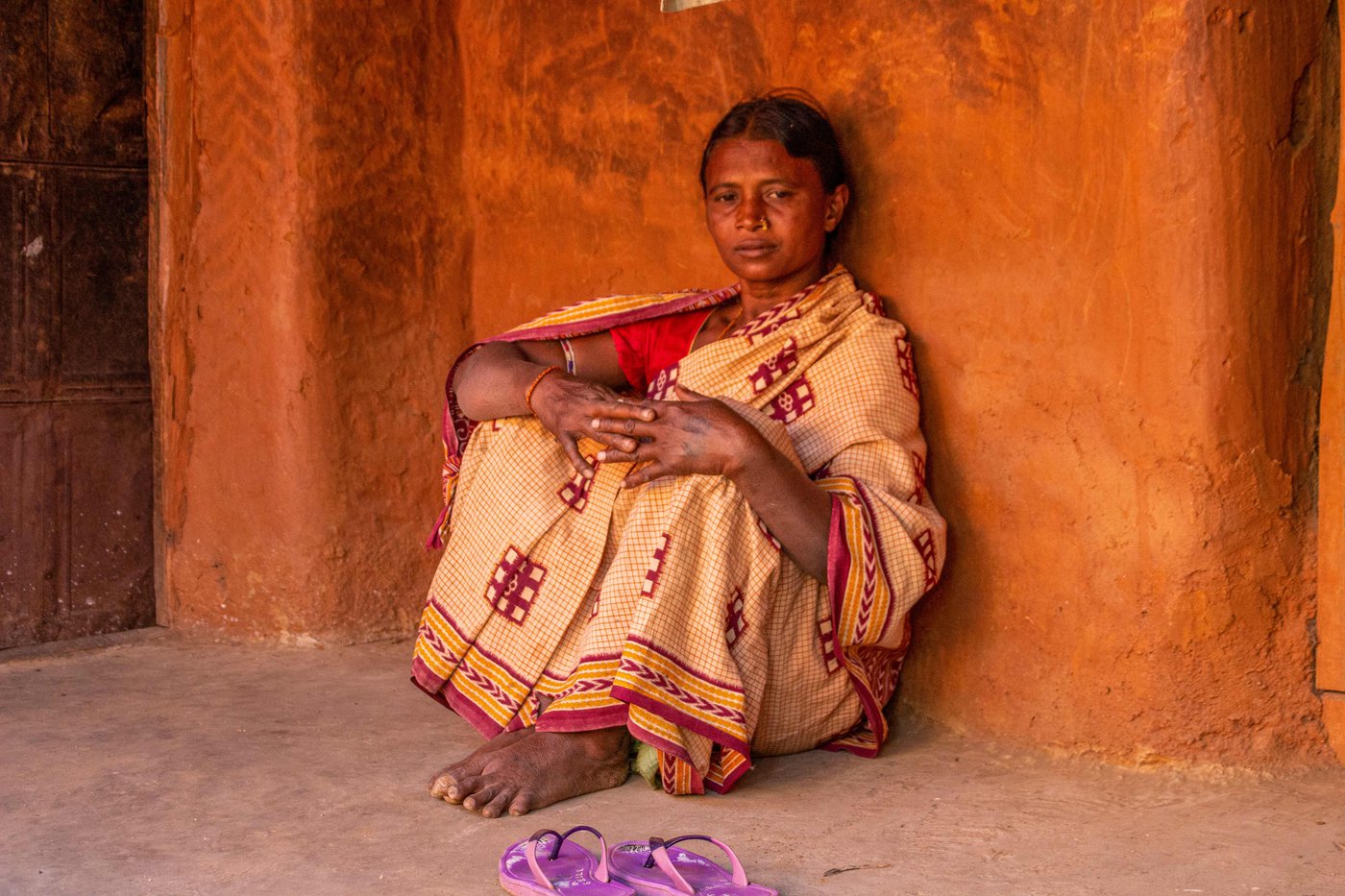 In Hial, a house half-built, a family broken

Supari Putel, a daily wage labourer from Odisha’s Balangir district, lost her husband and son within four months in 2019, and has since struggled with sorrow, never-receding debt, and an incomplete house

Supari Putel had been inside far more hospitals for a decade than she would care to remember.

For long years, the hospitals visits were in Odisha and Chhattisgarh, for the treatment of her ailing 17-year-old son. And then, briefly, for her husband Sureswara, in Mumbai.

Both of them died within a span of four months in 2019, leaving Supari suffused with sorrow.

Her husband Sureswara was just 44. In September 2019, he and Supari had migrated to Mumbai – around 1,400 kilometres from their home in Odisha’s Balangir district. A local labour agent had recruited them for a construction site job. “We went to earn some money to repay our debts and complete the [building of] our house,” Supari said. Together, they earned Rs. 600 as daily wages.

“One evening, while working at the site in Mumbai my husband was struck with high fever,” recalls 43-year-old Supari, sitting on the ground in front of her mud house in Hial, a village of 933 residents in Turekela block. She and her family belong to the Mali caste, an OBC.

Supari and the supervisor at the construction site took Sureswara, by autorickshaws and ambulance, to three hospitals in the peripheries of the city, before finally reaching Lokmanya Tilak Municipal General Hospital in Sion in north-central Mumbai.

“Each hospital kept sending us to another hospital as we did not have our Aadhaar cards and other papers [at the time]," said Supari. “He had [symptoms of] jaundice. His body became paralysed below the waist, so I kept rubbing his feet,” she adds, unsure of the specific illness. The very next day, November 6, 2019, Sureswara died at the hospital. 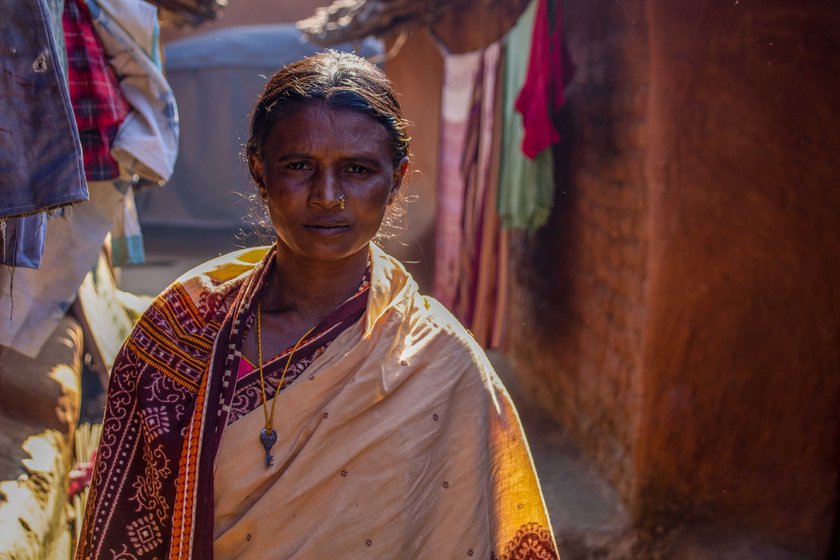 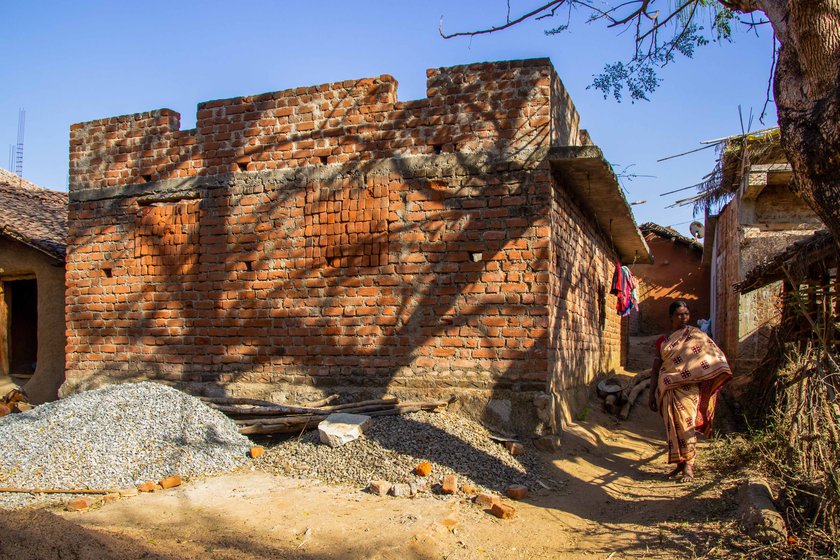 Supari Putel in front of her mud house and the family's incomplete house (right) under the Pradhan Mantri Awaas Yojana: 'This house cost me my husband'

"The supervisor told me to cremate him in Mumbai because transporting the body to Odisha would cost a lot of money. I gave in,” Supari says. “The supervisor paid for the funeral and sent me back after clearing my dues, with the ashes of my husband in one hand and his death certificate in another,” she adds. She spent some of the Rs. 6,000 she received as wages to take a train back home on November 11, 2019, along with her brother, who had come to Mumbai from Karlabahali village in Balangir, to bring her back.

Before going to Mumbai, Supari and Sureswara had worked as wage labourers in their own village, in Balangir’s Kantabanji town or in Chhattisgarh's Raipur city, each earning Rs. 150 for a day’s work. (A July 2020 notification of the Odisha government mandates Rs. 303.4 as the minimum wages for this “unskilled” category of worker). They shared land with Sureswara’s six brothers (Supari couldn’t say how much they owned), but it had been left uncultivated due to water scarcity in the region.

Twice, between 2016 and 2018, they had gone to ‘Madras’, Supari says, to work at brick kilns. “As my children were growing up and Bidyadhar started falling ill, we needed money. He was sick for 10 years."

Bidyadhar was their middle child. Supari has an older daughter, 22-year-old Janani, and a younger son, 15-year-old Dhanudhar. Her 71-year-old mother-in-law Suphul also lives with the family. She used to work as a farmer with her husband Lukanath Putel (he has since passed away) and now manages on an old age pension. Janani was married into a family in Nuapada district’s Sikuan village in 2017 when she was 18. And Dhanudhar, a Class 10 student, moved to his sister’s house after his brother died and his parents migrated to Mumbai to work.

Supari does not know what kind of cancer took away her son at the age of 17. Bidhyadhar had been battling it for 10 years, and the family travelled to various hospitals for treatment. “We went to Burla hospital [in Sambalpur district] for three years, to a hospital in Balangir for three years and to Ramkrishna hospital,” she recounts. The last is a private hospital in Raipur, around 190 kilometres from Supari’s village, and they would take a train from Kantabanji, the railway station nearest to Hial.

Over the years the family borrowed money from friends, relatives and local moneylenders for Bidyadhar’s treatment. Supari even mortgaged Janani's jewellery at a shop in Kantabanji to raise Rs. 50,000 for her son’s medical expenses. 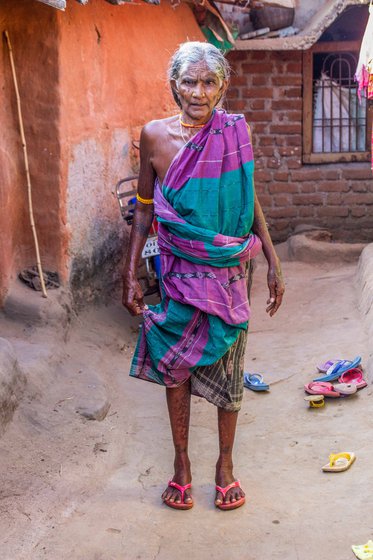 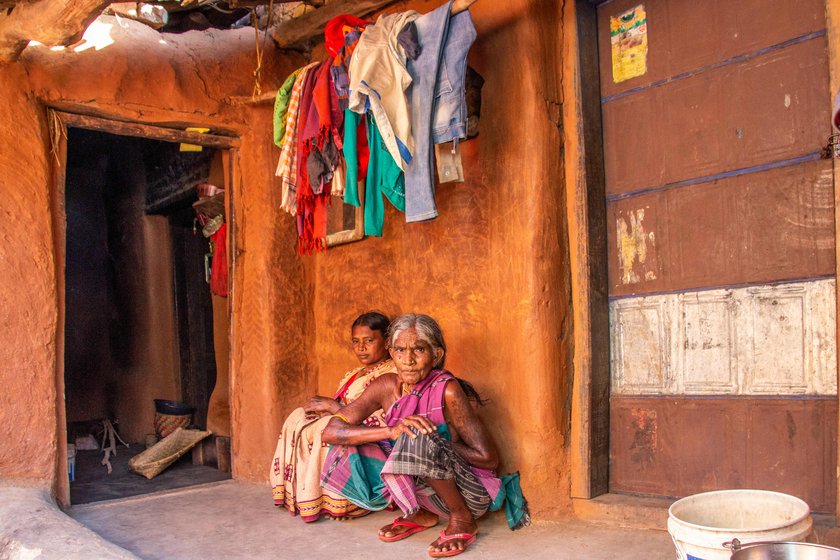 Suphul Putel (left), still grieving too, is somehow convinced that Supari, her daughter-in-law, is not being truthful about how Sureswara died: 'My son talked to me on the phone and he seemed to be well...'

When the debts grew further, under pressure to repay, the couple migrated to Mumbai in March 2019. But in June that year, when their son’s condition began to worsen, Supari rushed back to Hial, and Sureswara too returned to the village in July. “He suffered for months, and finally succumbed around rath yatra [in July],” Supari recalls.

Soon after Bidyadhar’s passing, the family was sanctioned a house under the Pradhan Mantri Awaas Yojana (Gramin). They were to receive Rs. 120,000 in instalments to build a new house. But Supari and Sureswara were compelled to divert a part of the money to pay back the loans taken for their son’s treatment, leaving the construction incomplete. “I got three portions– the first was of 20,000 rupees, second was 35,000 and a third of 45,000 rupees. The first and second we used to buy various items like cement and stones for our house, but the last instalment we used for our son’s treatment,” says Supari.

When officials from the Block Development Office at Turekela came to inspect the house in August 2019, they found it half-done and reprimanded the couple. “They asked us to complete the house otherwise they will file a case against us. They said that if we will not complete the house, we will not get the last instalment amount,” says Supari

“It had been barely a month since my son died, but soon we were again forced to migrate to Mumbai [in September 2019] so that we could earn some money to complete the house,” says Supari, pointing to the half-completed structure around 20 metres from her mud home. It does not have a roof, windows or door, and the walls are yet to be plastered. “This house cost me my husband,” she says.

Supari’s mother-in-law Suphul is still grieving too, and is somehow convinced that her daughter-in-law is not being truthful about how Sureswara died. “My son talked to me on the phone and he seemed to be well. I cannot believe that he died after a few days,” she says. Suphul thinks that her son died in an accident while working on the construction site, and that Suphul is hiding the real cause because she does not want to be blamed for it. Supari though insists: “She is always blaming me unnecessarily and nothing like this happened." 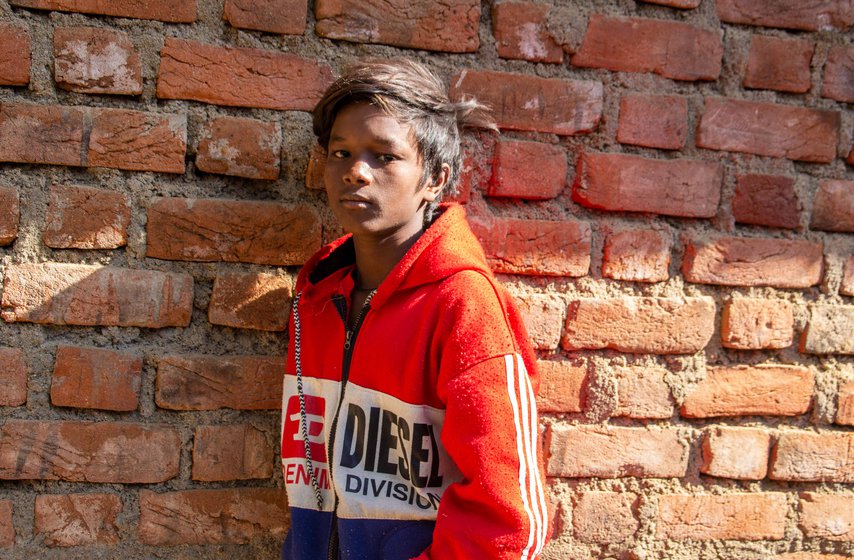 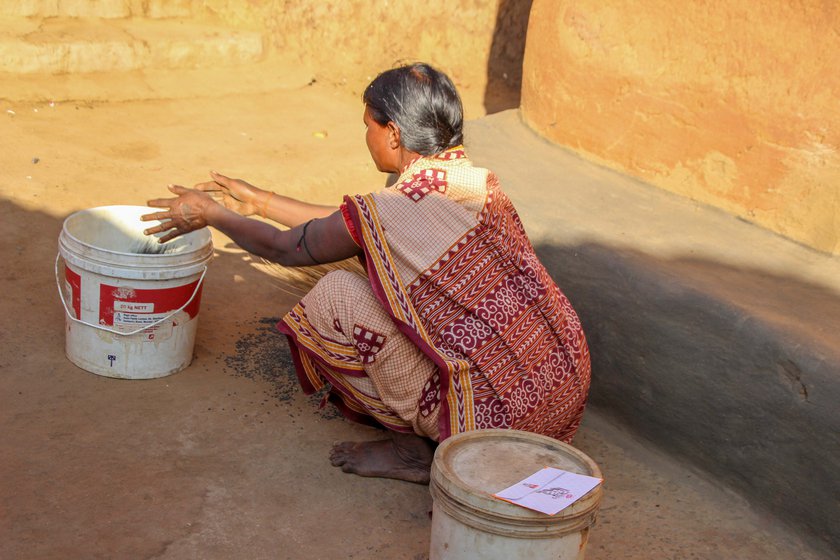 After losing his father and brother, Dhanudhar (left), her youngest son, says Supari, has lost interest in studying

The family received Rs. 20,000 in December 2019 under the National Family Benefit Scheme, which provides financial assistance to a family on the death of its primary breadwinner. “I used this to pay back the loans taken from relatives for my husband’s dasa ceremony [a mourning ritual],” Supari says. She has also been receiving a widow's pension of Rs. 500 a month since December 2019.

As a construction worker, Sureswara’s family should ideally also be entitled to ‘accidental death’ benefits of Rs. 200,000 from Odisha’s Building and Other Construction Workers' Welfare Board. But the family is not eligible to claim the amount because Sureswara had not registered with the District Labour Office. “Even if we get some money it will be a big help,” says Supari. Their house remains incomplete and some of their debts are lingering, with at least Rs. 20,000 owed to relatives.

Supari is now the sole earner of the household. She labours in and around Hial village, earning Rs. 150 a day. "I don’t get regular work. We go hungry sometimes,” she says. Dhanudhar has returned to Hial from his sister’s village. “My son is not studying. He has lost interest in studies,” Supari says. “He left school and is not appearing for board exams this year [in April 2021].”

The house is still incomplete, with plants and grass sprouting on the half-built walls and floor. Supari does not know how and when she can raise the funds to build it. “ If the roof is not cast, it will be [even more] damaged in the rainy season. Last year’s rains already damaged its walls. But if I have no money, what can I do?”

Note: On learning about Sureswara’s death from a local newspaper, this reporter and a friend visited Hial village. They discussed the family’s situation with B. P. Sharma, an advocate and social activist from Kantabanji, who wrote to the district Collector asking for financial assistance. In response, the Collector directed the Block Development Officer of Turekela to sanction financial assistance under the National Family Benefit Scheme to the bereaved family. Supari subsequently received Rs. 20,000 in her bank account and was issued a widow’s pension card.