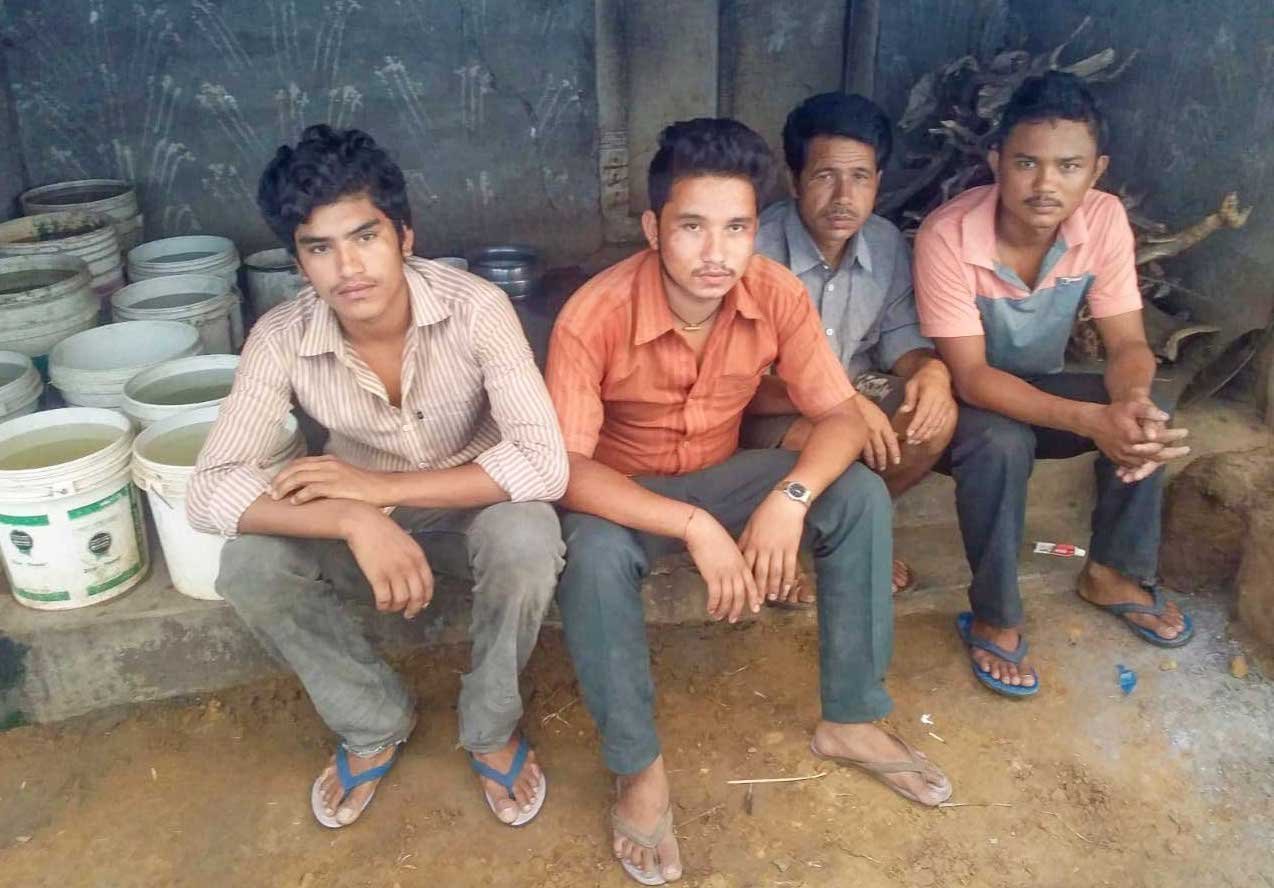 Off guard: Nepal migrants in locked down AP

With no income during the lockdown, Suresh Bahadur, a security guard in AP's Bhimavaram town, struggled with depleting supplies, sickness and uncertainty about returning home – across the border, to Nepal

“The medicines are also over, the money is also over and the gas is also over,” Suresh Bahadur had told me in mid-April.

For four years, armed with a seeti and a lathi , Suresh used to spend his nights making rounds on a bicycle, guarding houses and shops. He and his father, Ram Bahadur, worked as neighbourhood security guards in Bhimavaram town of Andhra Pradesh’s West Godavari district.

After March 22, once the lockdown began, the bicycle got put aside, and Suresh began spending his time scrolling on his phone looking for news reports on Covid-19, and in procuring food, cooking gas and water.

Suresh, 23, stayed in a rented room in the Tammi Raju Nagar locality with Shubham Bahadur, around 43, and 21-year-old Rajendra Bahadur – all friends from back home in Dikla village in Nepal’s Bajhang district. Ram Bahadur, who rented a room in another part of Bhimavaram, moved in with them soon after the lockdown began. 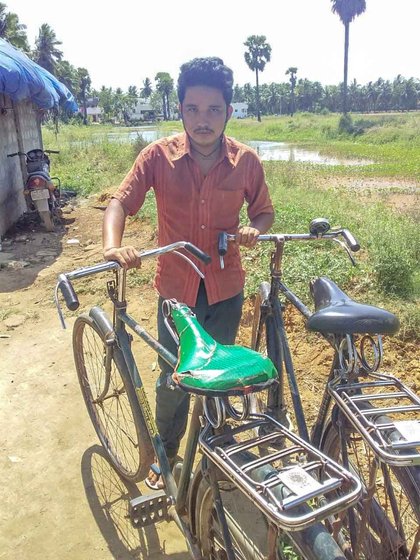 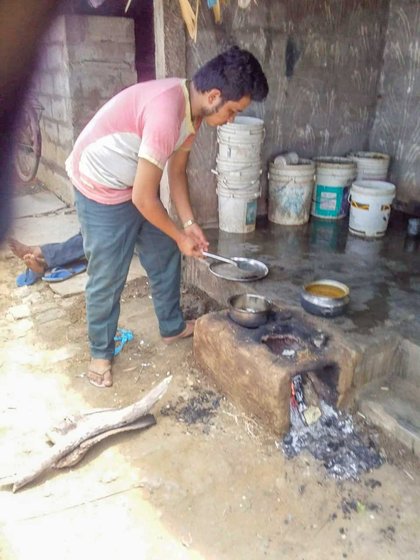 Suresh Bahadur's work required making rounds on a bicycle at night; he used wood as cooking fuel during the lockdown

“Before the lockdown, we never cooked three meals for four people every day,” added Suresh. He usually ate lunch and dinner at roadside stalls and eateries, spending around Rs. 1,500 a month on these meals. He and his roommates bought gas cylinders from the market before the lockdown, and used these only for cooking breakfast. But after March 22, they began cooking all their meals in their room.

“By the second week of April, we ran out of both gas and food,” Suresh said. On April 12, with only 2 to 3 days of rations remaining, purchased from nearby grocery shops,  he contacted a helpline run by a coalition of groups and activists in Andhra Pradesh. The volunteers there helped Suresh and his housemates get flour, dal , vegetables, oil, sugar, soap, washing powder and medicines – thrice from April 12 to May 2.

A gas cylinder refill only reached them on May 2. Suresh and the others used wood as cooking fuel in the meantime, collecting it from nearby areas even after receiving a cylinder, unsure of how long they would continue to get aid. “This country is not ours,” Suresh said. “How can anything else be [in our control]?”

Before the lockdown, they used to fetch 8-10 buckets of water from a municipal corporation water tanker stationed close to their home every afternoon, which provided free water to local residents – this continued during the lockdown. Every day, they would also purchase two 10-15 litre cans of drinking water for Rs. 5 each from a nearby corporation office. During the lockdown, these cans were made available free of cost.

The Population Monograph of Nepal (2014) says there were more than 7 lakh Nepalese migrants in India in the year 2011 – 37.6 per cent of Nepal’s 'total absent population’. The government of Nepal’s Economic Survey of 2018-19 estimated that ‘remittance income’ accounted for more than a quarter of Nepal’s gross domestic product. 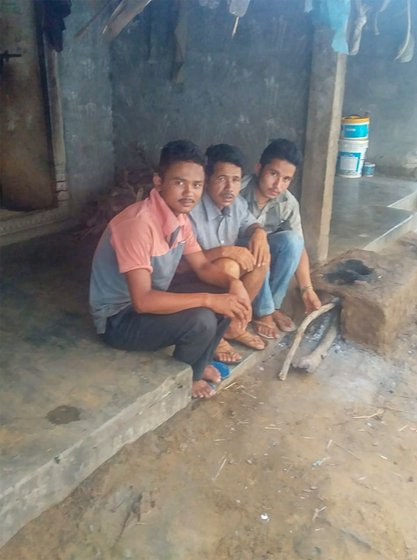 “I wanted to earn for my family,” said Suresh, who dropped out of college to come to India in 2016. “It was a struggle to get food.” Ram and Suresh Bahadur are the only earning members in their family of six. It had been nearly nine months in April since Suresh last saw his mother, Nanda Devi, a homemaker,. His younger brothers – Rabindra Bahadur, 18, and Kamal Bahadur, 16, are both students in Dikla village. Suresh married his former schoolmate, Sushmita Devi, shortly before migrating to India. “When we were 16 or 17 we fell in love,” he recounted, with a giggle. Every month, before the lockdown, Suresh sent between Rs. 2,000 and Rs. 3,000 back home.

During the lockdown, Ram Bahadur told me, "She [his wife] has not asked for money for now." The family back in Nepal was managing on the money sent by Ram and Suresh before the lockdown, and rations occasionally distributed by the government of Nepal.

The border between India and Nepal has been porous after both countries entered into a Treaty of Peace and Friendship in 1950. The government of Nepal sealed this border on March 22, 2020, to contain the spread of Covid-19. Numerous migrant workers from Nepal had been gathering at various border outposts in India since the lockdown began, news reports said, waiting to cross over into their country.

Ram Bahadur first crossed the Nepal-India border at the age of 11 – he ran away from Dikla village in search of work. He took up several jobs – as a domestic helper in Delhi’s Tilak Nagar, and then as a security guard in different parts of Delhi and Uttar Pradesh. “If you’re 11 years old, how will you know what troubles and difficulties are?” he said. “Somehow, I made a living.”

“We were planning to go home this month,” Suresh told me in April. He and his father visited their village in the hills every summer, for a month and a half, taking trains and shared taxis in a journey that lasted 3 to 4 days. This year in April they had no idea when and how they would make it back next. In the meantime, Suresh had enough to worry about: “I’m already sick, what will happen if I go outside?”

He was referring to the lingering effects of February 2019 accident, when he was hit by a lorry around noon while cycling home after collecting his wages. The lorry driver rushed him to a private hospital in Bhimavaram. An immediate liver surgery was necessary. Suresh and Ram travelled by taxi to a government hospital in Eluru town, around 75 kilometres away, where they were told the hospital did not have the facilities for the operation. Finally, they sought treatment at a private hospital in Vijayawada. Suresh paid the hospital bills with the help of his friends, other Nepalese migrants in Andhra Pradesh: “From Kakinada, from Bhimavaram, all my men came to see me and brought whatever they had.” 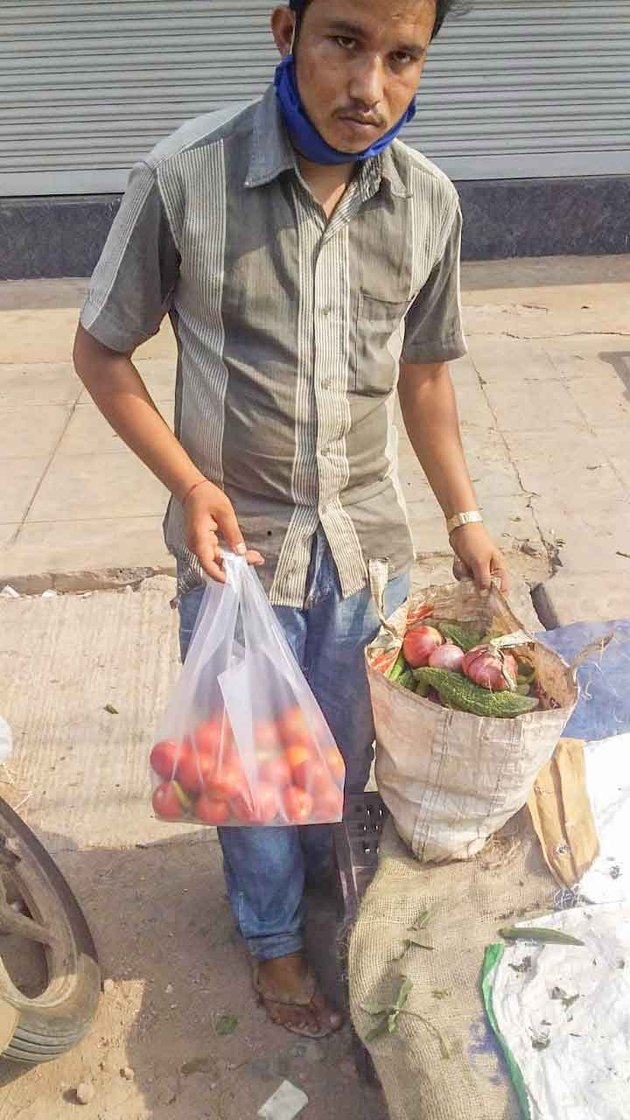 'This country is not ours', said Suresh. 'How can anything else be [in our control]?'

A year later Suresh was still in debt, of “lakhs of rupees”, he said, and needed around Rs. 5,000 for medical tests and medications every month. With the lockdown continuing, by April, he became increasingly worried: “Now even my men [his Nepalese friends] here are struggling for money. They have worked at many jobs in India, whatever they could find – selling cigarettes, working in restaurants and hotels. After my accident, I keep thinking – I was saved, but none of our savings remained.”

Every time I spoke to Suresh Bahadur on the phone – five times between April 13 and May 10 – he mentioned that he had not fully recovered since his accident. Suresh was scheduled to meet his doctor in Vijayawada for a monthly check up on March 25, but was unable to travel because of the lockdown.

“We are managing somehow, but we are in big trouble,” Suresh told me. “There is no duty [work], we do not know the language or have the people [from Nepal, here in town] – god only knows how this will continue.” Suresh had paid the rent for their room in March, and had requested the landlord to defer rent payment for April and May.

In our last conversation on May 10, Suresh told me the cylinder gas refill would last them only a month. The helpline volunteers had also informed them that they were not taking on new requests for aid after May 10, and formally shutting the helpline by the end of the month. Suresh knew it would then get even more difficult to procure gas, food or his medicines. He also mentioned that they were running out of phone balance in all the three phones they had among them.

Suresh and Ram Bahadur’s mobile phones have been switched off since May 30. Sure Manikanta, a shopkeeper who sold them rations and medicines during the lockdown, told us, "A few days ago, I saw many Nepalese men pack their belongings and leave.” He confirmed that Suresh Bahadur’s room was locked.