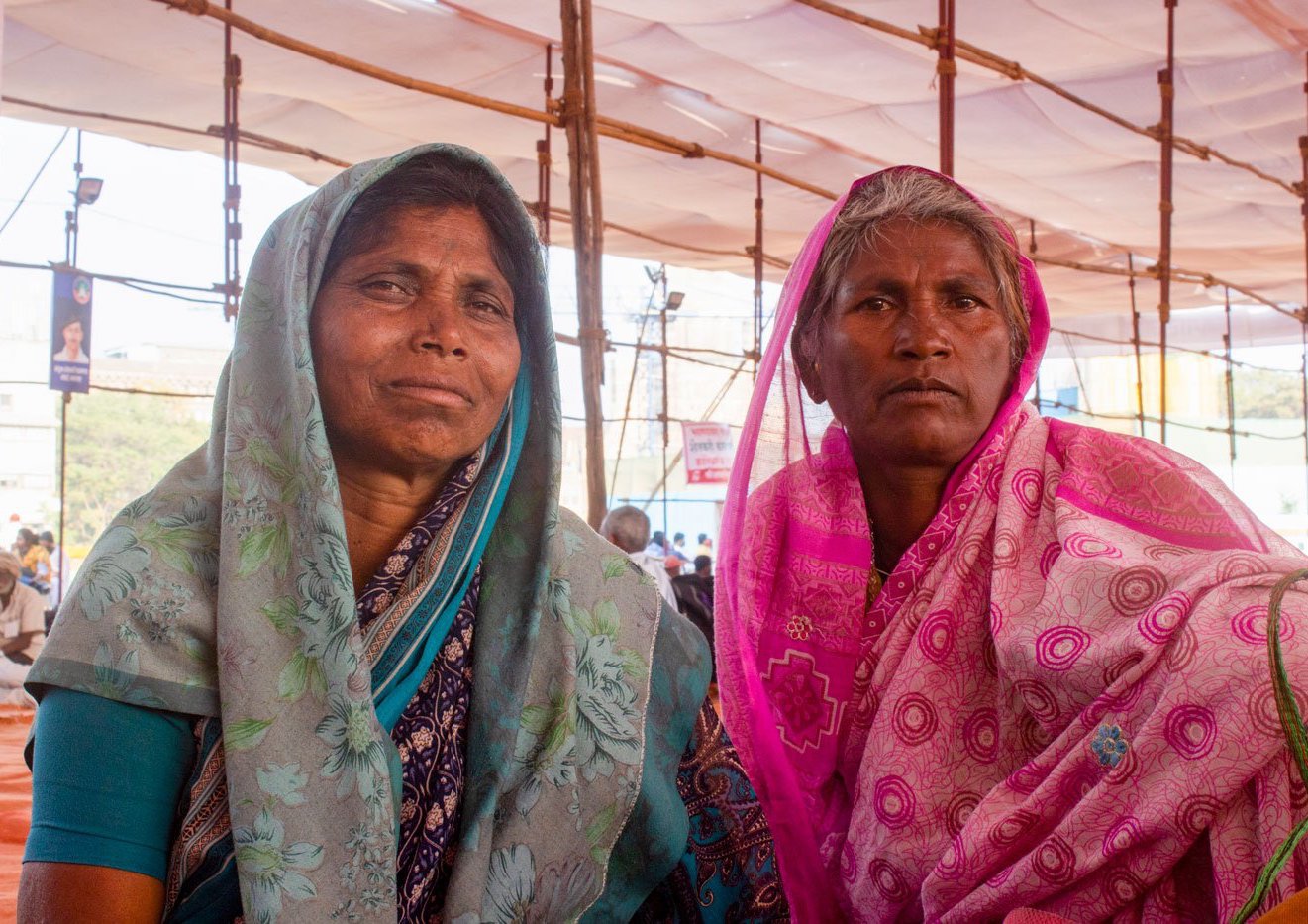 'Without a saat baara, we can’t do anything'

Arunabai and Shashikala – both widows from Adivasi communities, and farmers and farm labourers in Aurangabad district – came to Mumbai to protest against the new farm laws and demand their land titles

“Without a saat baara , we can’t do anything,” said 55-year-old Shashikala Gaikwad, while sitting at Azad Maidan in south Mumbai for the farmers’ protest.

Next to her, sitting on the ground in a tent, on orange and red rugs, was 65-year-old Arunabai Sonawane. Both of them had come to Mumbai from Chimnapur village in Maharashtra’s Aurangabad district for the protest organised by the Samyukta Shetkari Kamgar Morcha on January 25-26.

Both had come here to demand their land titles under the Forest Rights Act of 2006 and to protest against the three new farm laws. In their village in Kannad taluka , farm labour is the main source of income for both Arunabai and Shashikala, who belong to the Bhil Adivasi community. It gives them Rs. 150-200 as wages on days when work is available. “Unlike you, I don’t know how much I will earn in a month,” Arunabai told me.

On three acres each, the two also cultivate corn and jowar (sorghum). They sell the corn crop – 10-12 quintals for around Rs. 1000 per quintal – and keep the jowar for their family’s meals. Despite fences, their crops are often destroyed by wild boars, nilgais , wild pigs and monkeys. “At night, whoever has a farm stays awake [to guard the crops],” says Arunabai.

The land that Shashikala and Arunabai cultivate belongs to the forest department. “Without a saat baara [record of land titles] we can’t get any facilities [for farming],” Shashikala said. “The forest department people also keep troubling us. They tell us: don’t farm here, don’t build your house there, we will fine you if you bring a tractor.”

Shashikala and Arunabai had come to Azad Maidan also to support the demand of the farmers at Delhi’s borders to repeal The Farmers’ Produce Trade and Commerce (Promotion and Facilitation) Act, 2020 ; The Farmers (Empowerment and Protection) Agreement on Price Assurance and Farm Services Act, 2020 ; and The Essential Commodities (Amendment) Act, 2020 . These were first passed as ordinances on June 5, 2020, then introduced as farm bills in Parliament on September 14 and hastened into Acts by the present government on the 20th of that month. 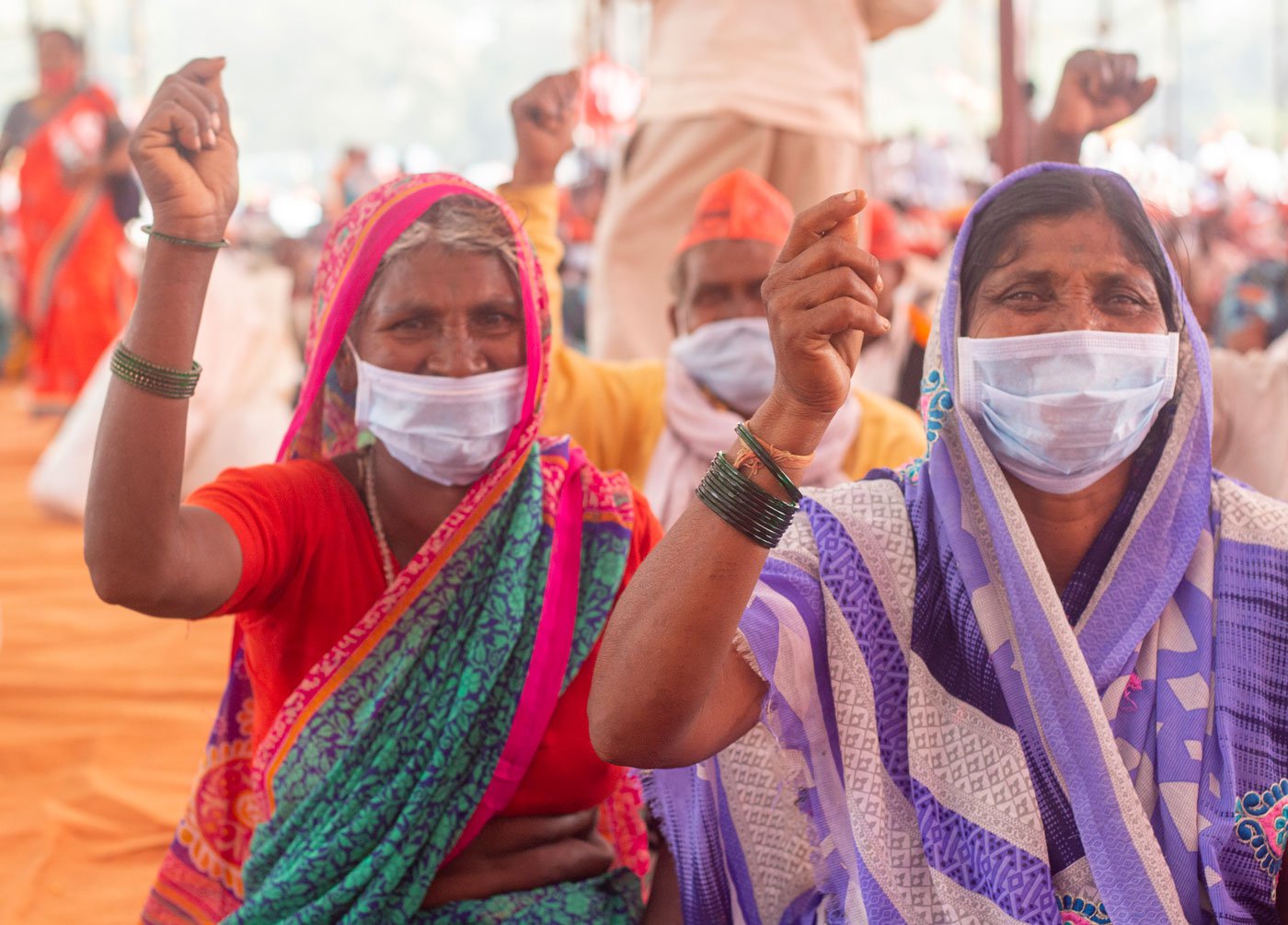 'There will be more pressure if more of us come [to protest]', says Arunabai Sonawane (right), with Shashikala Gaikwad at the Azad Maidan farm sit-in

The farmers see these laws as devastating to their livelihoods by expanding the space for large corporates to have even greater power over farming. They also undermine the main forms of support to the cultivator, including the minimum support price (MSP), the agricultural produce marketing committees (APMC), state procurement and more. The laws have also been criticised as affecting every Indian as they disable the right to legal recourse of all citizens, undermining Article 32 of the Indian Constitution.

Shashikala and Arunabai have other worries too. Both women lost their husbands to tuberculosis around a decade ago, but neither has received a widow’s pension yet. Shashikala now lives with her two sons, their wives and three grandkids; the five adults in the family work on the farm and as agricultural labourers.

“Six-seven of us [widows] went to the tehsildars office [in Kannad] with the [pension] forms,” said Arunabai, recalling an incident of around two years ago. “He told me that I have two grown sons so I will not get a pension.”

Arunabai lives in a 13-member household with her two sons, their wives, and eight grandchildren. The five adults in her family too work as farmers and farm labourers, and occasionally catch and consume fish from a small pond in Chimnapur.

“It is my elder brother’s son’s wedding tomorrow, but I have come here – to listen and know what is happening,” Arunabai said firmly that day at Mumbai’s Azad Maidan. “There will be more pressure if more of us come [to protest]. That is why we are here.”