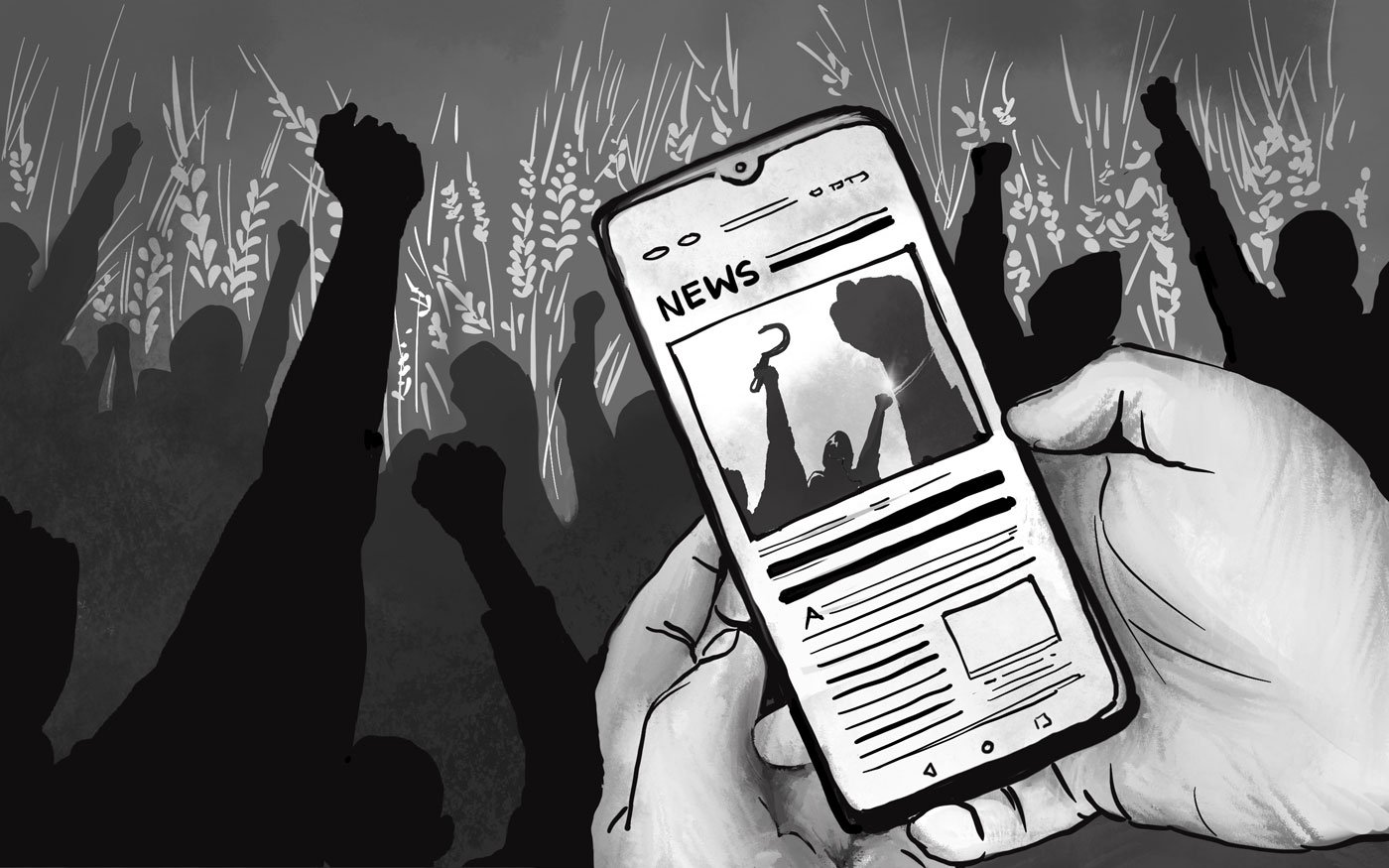 And you thought it’s only about farmers?

The new farm laws disable the right to legal recourse of all citizens, not just farmers – to an extent unseen since the 1975-77 Emergency. The farmers at Delhi’s gates are fighting for the rights of us all

Welcome to Section 13 of The Farmers’ Produce Trade and Commerce (Promotion and Facilitation) Act, 2020 (the one aimed at gutting the Agriculture Produce Marketing Committees, better known as APMCs).

And you thought the new laws were only about farmers? Sure, there are other laws that also exclude prosecution of civil servants for carrying out their legal duties. But this one goes way over the top. The immunity given to all those in respect of anything , acting ‘in good faith,’ whatever they do, is sweeping. Not only can they not be taken to the courts for a crime they may have committed ‘in good faith’ – they’re protected against legal action for crimes they are yet to commit (‘in good faith’ of course).

Just in case you missed the point – that you have no legal recourse in the courts – Section 15 rubs it in:

“No civil court shall have jurisdiction to entertain any suit or proceedings in respect of any matter, the cognizance of which can be taken and disposed of by any authority empowered by or under this Act or the rules made thereunder.”

Who is the ‘any other person’ doing things ‘in good faith’ who cannot be legally challenged? Hint: try listening to the names of corporate giants that the protesting farmers are chanting. This is about the ease of business – of very, very Big Business.

“No suit, prosecution or other legal proceedings shall lie….” It’s not just farmers who cannot sue. Nobody else can, either. It applies to public interest litigation too. Nor can non-profit groups, or farm unions, or any citizen (driven by faith good or bad) intervene.

These are surely among the most sweeping exclusions of a citizen’s right to legal recourse in any law outside of the Emergency of 1975-77 (when we simply suspended all fundamental rights). 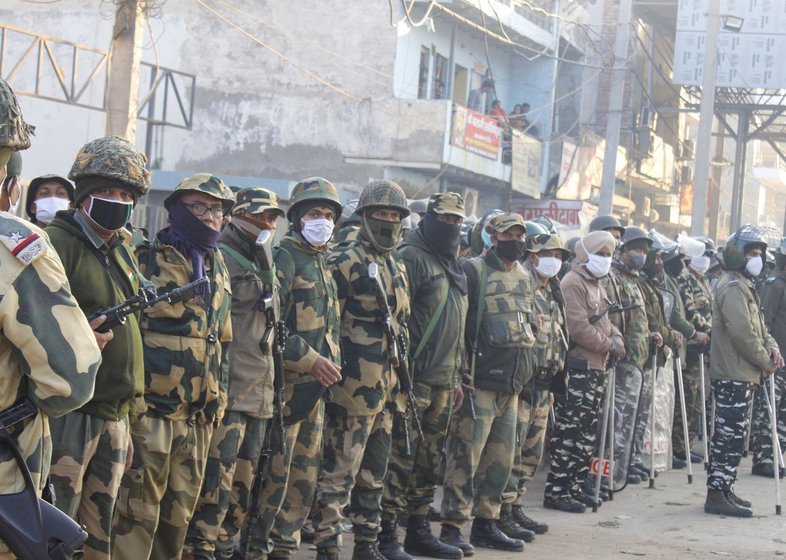 Every Indian is affected. Translated into English, the legal-lingo of these laws also convert the (low-level) executive into a judiciary. Into, in fact, judge, jury and executioner. It also magnifies the already most unjust imbalance of power between farmers and the giant corporations they will be dealing with.

An alarmed Bar Council of Delhi asks this in a letter to Prime Minister Narendra Modi: “How can any litigation having civil consequences be given for adjudication to structures involving administrative agencies, controlled and run by executive authorities?”

(Among executive authorities, read sub-divisional magistrates and additional district magistrates – all famed for their independence and bursting with good faith and good intent, as every Indian knows). The Bar Council of Delhi goes on to term the transfer of judicial powers to the executive as “dangerous and a blunder.” And notes its impact on the legal profession: “It will substantially damage district courts in particular and uproot the lawyers.”

Still think the laws are only about farmers?

More such transfer of judicial power to the executive lies in the law about contracts – The Farmers (Empowerment and Protection) Agreement on Price Assurance and Farm Services Act. 2020.

Section 19 states: “No civil Court shall have jurisdiction to entertain any suit or proceedings in respect of any dispute which a Sub-Divisional Authority or the Appellate Authority is empowered by or under this Act to decide and no injunction shall be granted by any court or other authority [emphasis added] in respect of any action taken or to be taken in pursuance of any power conferred by or under this Act or any rules made thereunder.”

And to think that Article. 19 of the Indian Constitution is about freedom of speech and expression, peaceful assembly, freedom of movement, the right to form associations or unions….

Surely the ‘mainstream’ media (a strange term for platforms whose content excludes over 70 per cent of the population) cannot be unaware of these implications of the new farm laws for Indian democracy. But the pursuit of profit drives them far more than any notion of public interest or democratic principles. 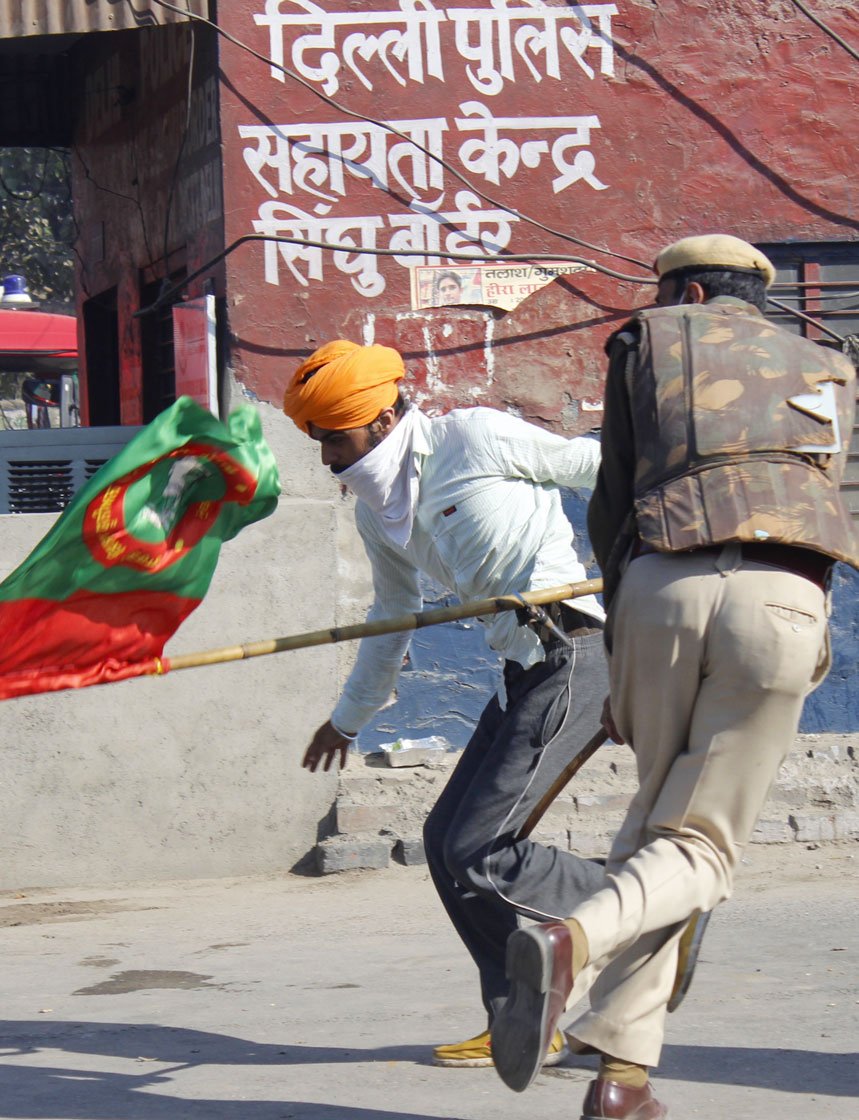 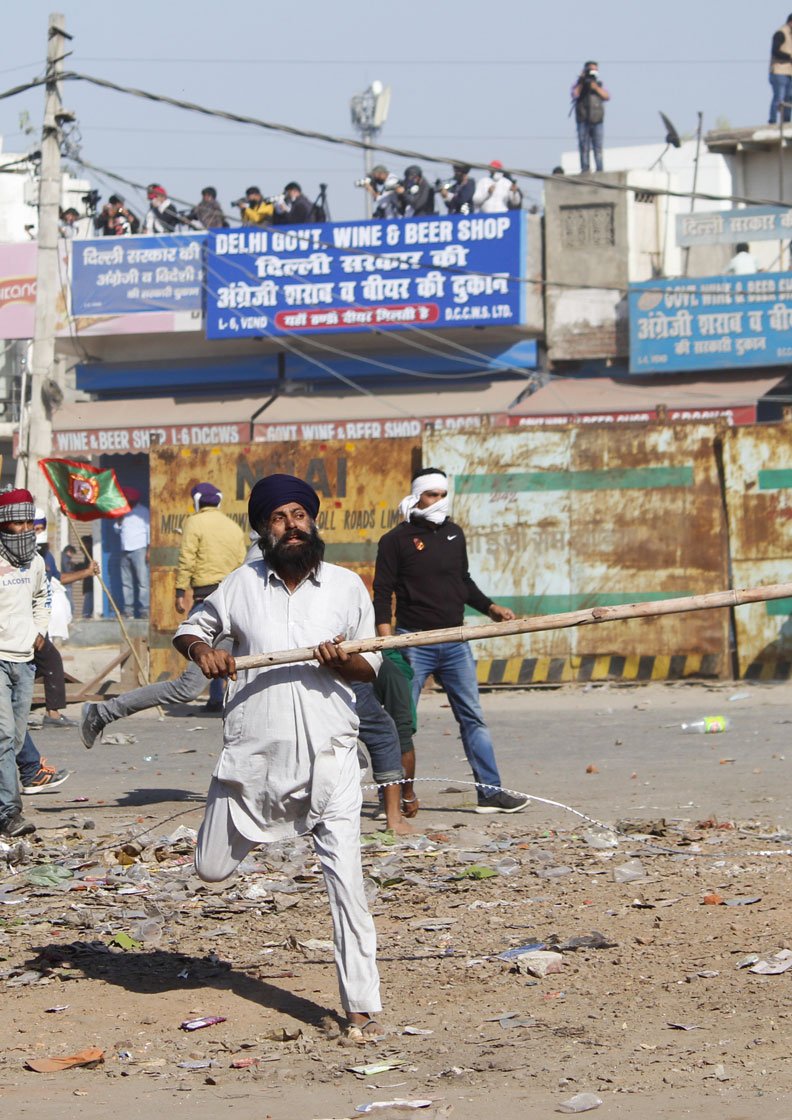 Protestors at Delhi’s gates were met with barricades, barbed wire, batons, and water cannons – not a healthy situation at all

Shed any delusions about the conflicts of interests (in plural) involved. These media are also corporations. The BiggBoss of the largest Indian corporation is also the richest and biggest media owner in the country. ‘Ambani’ is one of those names the farmers at Delhi’s gates invoke in their slogans. At other, lower levels too, it’s been a long time since we could actually distinguish between Fourth Estate and Real Estate. The ‘mainstream’ media are too deeply embedded in this universe to put the interests of citizens (let alone farmers) above those of corporations.

The demonisation of the farmers in their papers and channels – rich farmers, only from Punjab, Khalistanis, hypocrites, Congressi conspirators and more – in the political reports (with some brilliant – and usual – exceptions) has been steady and relentless.

The editorials of Big Media, though, take a different tack. Crocodile compassion. Essentially, the government should have handled it better. These are after all a bunch of ill-informed yokels who cannot see, but should be made to understand, the genius of the establishment economists and the prime minister – who have made such caring laws, so important for farmers and also the larger economy. That said, they assert: these laws are important and essential and should be implemented.

“The fault in this whole episode,” says an editorial in the Indian Express , “ lies not in the reforms , [emphasis added] but in the way the farm laws were passed, and the government’s strategy of communication, or lack of it.” The Express is also worried that this mishandling will hurt other noble plans which, “like the three farm laws” are “reforms necessary to harvest the true potential of Indian agriculture.”

The primary task before all governments, says the Times of India in its editorial is “Undoing the misconceptions among farmers of the MSP regime’s impending demise…” After all, “The Centre’s reform package is a sincere attempt to improve private participation in the farm trade. Hopes of doubling farm incomes rest on the success of these fledgling reforms…” And reforms like these “would also correct harmful distortions in India’s food market.” 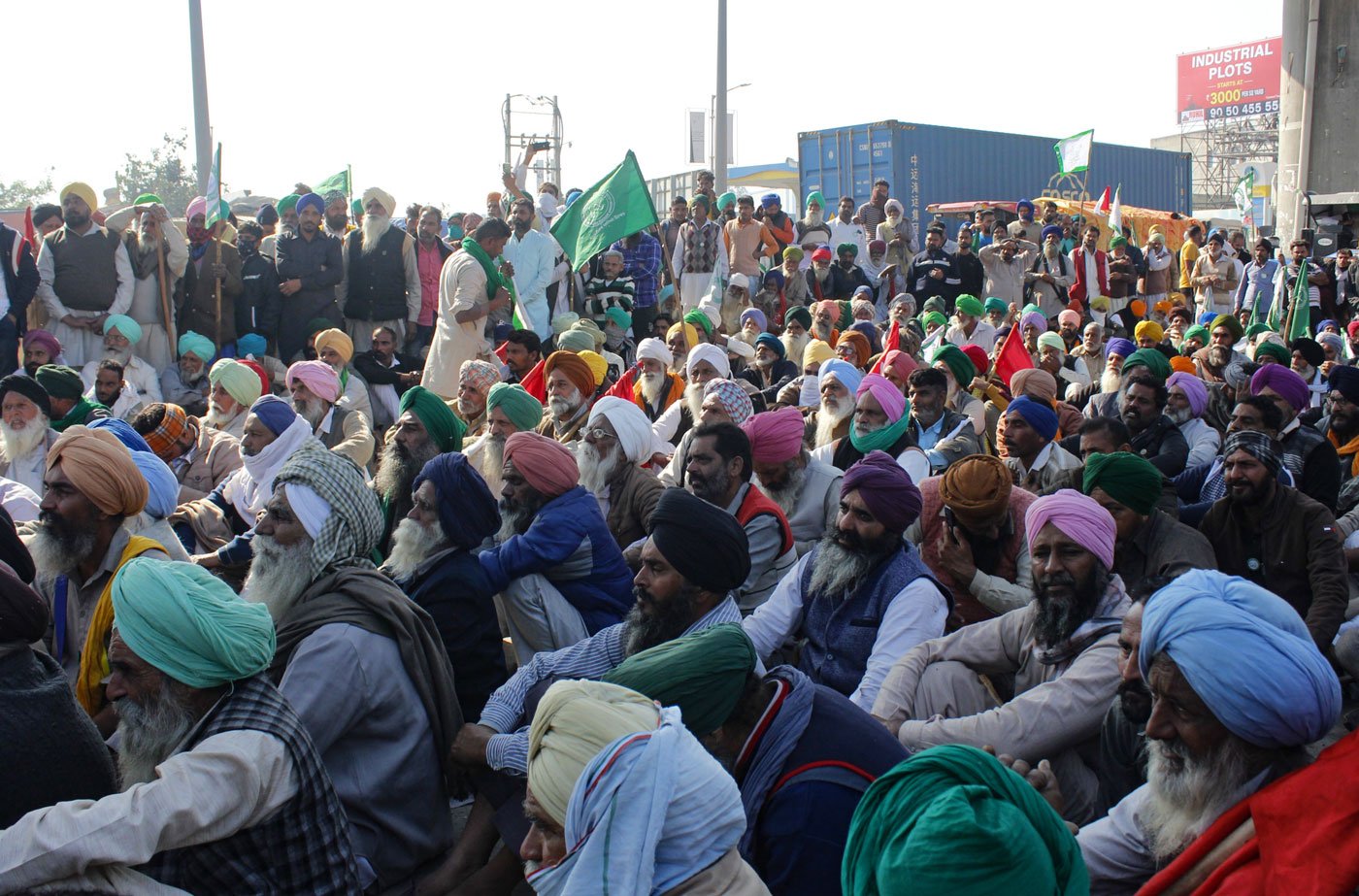 “There is sound rationale for the move [the new laws],” says an editorial in the Hindustan Times . And “Farmers will have to recognise that the reality of the laws will not change.” It too bleats about the need for being sensitive. With the very farmers it sees as “flirting with extreme-identity issues” and aligning with extremist rhetoric and action.

The government may be grappling with questions of which gaggle of conspirators the farmers unknowingly represent, at whose behest they function. The editorial writers have far greater clarity on who they represent and are in no danger of biting the corporate claws that feed them.

Even on the best-meaning, relatively least prejudiced television channels, the questions in the discussions are always within the framework of the establishment and its captive experts and intellectuals.

Never once a serious focus on questions like: why now? And what about the labour laws also pushed through in such haste?  Prime Minister Narendra Modi won a massive majority in the last polls. A majority he will have for another 2-3 years at least. Why did the Bharatiya Janata Party government feel that the height of the pandemic was a good time to push through these laws – a thousand other things demanding more urgent attention during a pandemic?

Well, the calculation was that this was a time when, cowed down by Covid-19, paralysed by the pandemic, the farmers and workers would not be able to organise and resist in any meaningful way. In short, this was not just a good time, it was the best time. In this they were egged on by their experts, some of whom saw in the situation, ‘a second 1991 moment’, a chance to push through radical reforms, exploiting demoralisation, distress, and chaos. And by prominent editors who begged the regime to “never waste a good crisis.” And by a Niti Aayog chief who has declared himself peeved by India being “too much of a democracy.”

And no more than passing references, superficial and insincere, on the extremely important question of the laws being unconstitutional. The Centre blasting through legislation on a state subject with no right to do so. 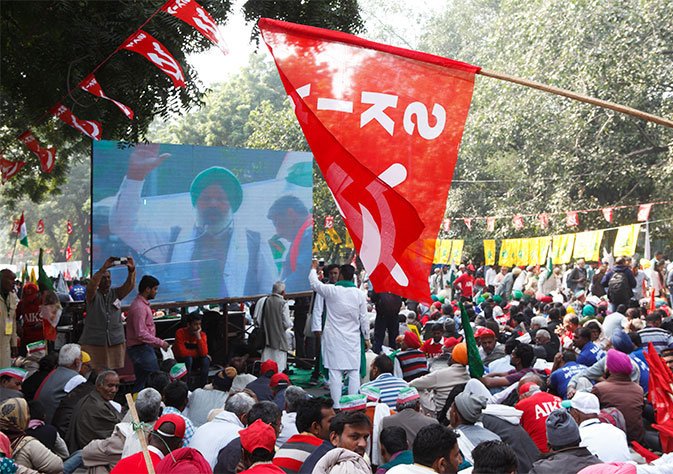 Not much discussion either, in the editorials, on why the farmers dismissed with such contempt the government’s offer of Death by Committee. If there is one committee report that every farmer across the country knows of, and demands implementation of, it is that of the National Commission on Farmers – which they call the ‘Swaminathan Report.’ The Congress since 2004 and the BJP since 2014 have competed in burying that report while promising to act on it.

And, oh yes, in November 2018, well over 100,000 farmers gathered near Parliament in Delhi demanding implementation of key recommendations of that report. They also sought a debt waiver, guaranteed Minimum Support Price, and many other demands – including a special session of Parliament to discuss the agrarian crisis. In short many of the very things the farmers now challenging the Dilli Darbar are demanding. And they were from 22 states and four union territories, not just the Punjab.

What the farmers – who refuse to accept so much as a cup of tea from the government – have done is to show us that the government’s calculations of fear and paralysis tying down them down were wrong. They were and are willing to stand up for their rights (and ours) and resist these laws at great risk to themselves.

They have also said something repeatedly that the ‘mainstream’ media ignore. They have been warning us of what corporate control of food will mean to the country. Seen any editorials on that lately?

More than a few of them know they are fighting for something much larger than the repeal of three laws, for themselves, or for Punjab. The repeal of those laws does no more than take us back to where we were – which was never a good place. To a terrible and ongoing agrarian crisis. But it would halt these new add-ons to agrarian misery or slow them down. And yes, unlike the ‘mainstream media’, the farmers see the importance of these laws in dismantling the citizen’s right to legal recourse and in eroding our rights. And even if they may not see or articulate it that way – theirs is also a defence of the basic structure of the Constitution and of democracy itself.

A version of this article first appeared in The Wire on December 09, 2020.