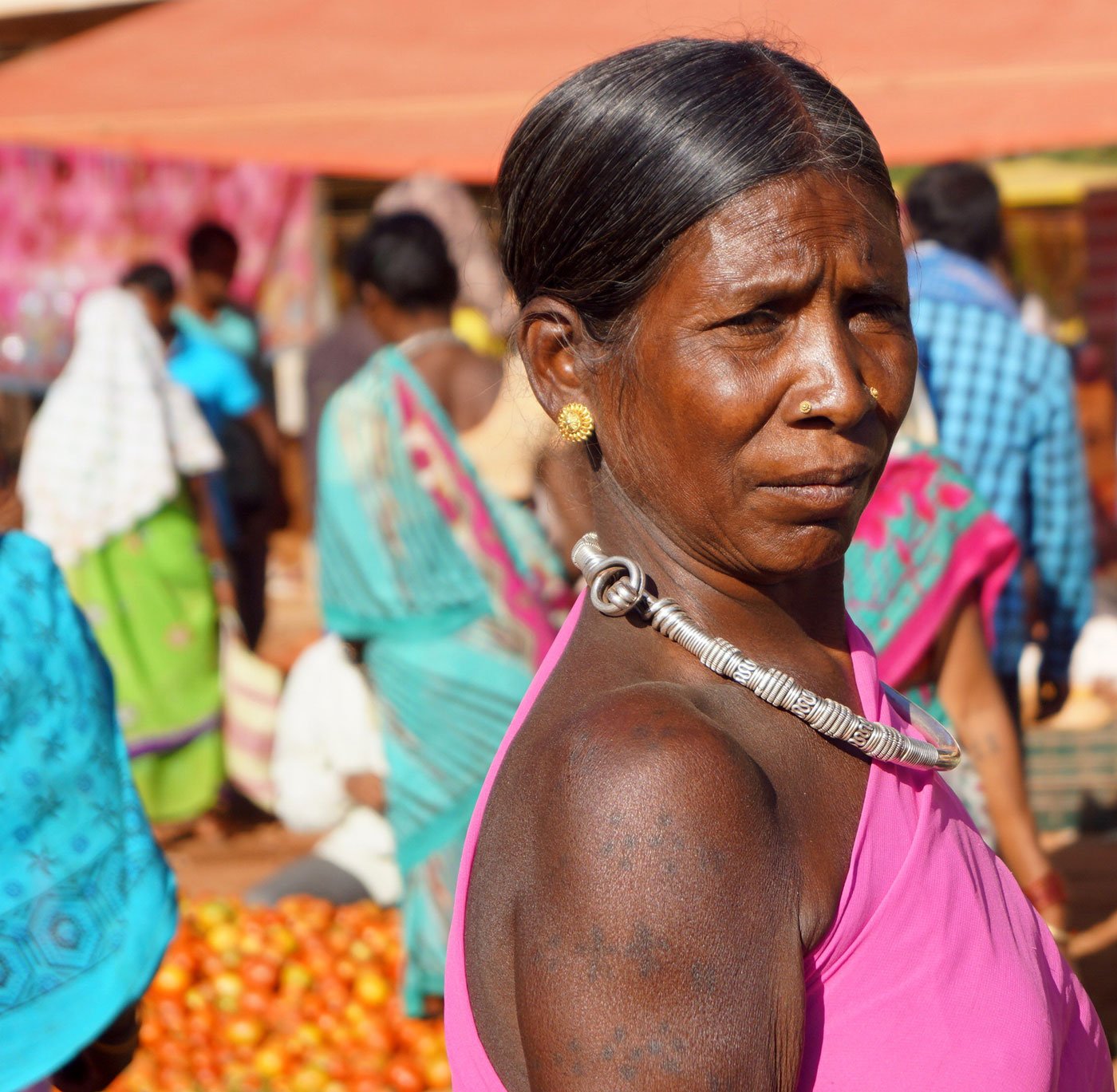 Adivasis from several villages gather at the weekly market in Amabeda village, Chhattisgarh, to buy and sell forest and agricultural produce, purchase weekly rations, drink some local brew, and watch a cockfight or two

From 10 a.m. every Wednesday, Adivasis from various villages start gathering at the weekly haat in Amabeda village. “People of 45-50 villages come here. It’s the main haat of this region,” says Sukay Kashyap, a Gond Adivasi activist from Amabeda.  Since there are no kirana (general) shops in these remote villages, they come to this haat in Antagarh block of (Uttar Bastar) Kanker district in Chhattisgarh to buy essentials and other items for the week.

Vegetable and fish sellers from Pakhanjur tehsil and traders from Keshkal and Dhanora  blocks – from a 30-kilometre radius – come to Amabeda to sell their goods. The array of vegetables at the haat includes potatoes, onions, tomatoes, brinjal, cabbage, cauliflower and green chillies. Many of the Adivasis  bring ragi , millet and rice, some bring mahua flowers, brooms made of bamboo, and other forest produce. Some sell spices, oil and soap. Potters bring pottery items, ironsmiths sell various implements required by farmers and labourers. With traders from outside the region coming in, the haat has grown over the years – they bring watches, plastic buckets, mugs, trinkets, hairclips and other items. They also sell battery-operated transistor radios, power chargers and torches of various sizes, which are especially necessary when people walk through the dark forest paths in the evening or at night.

Though there are a few other similar weekly markets in nearby villages, the Amabeda haat is among the oldest here – many elderly men and women I met say they have been coming here since their childhood.  But the haat s of the past were barter systems – paddy would be exchanged for salt, for example. Now, money earned as daily wages or at other jobs usually changes hands.

“When I was a child (around eight years old) I used to visit this market with my uncle,” says Keshav Sori, 53, who works with a voluntary organisation based in Kanker. “My uncle Ajuram Sori was a bamboo basket maker from Hatkara village and we would come to the haat on a bicycle. We started our journey the day before in the evening, stopped on the way for the night, and from  early the next morning we would start off again. At that time, most of the marketing was done in exchange for produce, very few people used money. My uncle too sold his bamboo baskets for rice and other items.”

The Amabeda haat is around 35 kilometres from Kanker town. This is forested area, with poor roads and transport services – there are no buses, usually only overloaded Bolero taxis or tempos ply here – and the region is impacted by Naxalite-state violence. The police routinely check vehicles; they checked ours too and asked where we were from and why we were going to the haat .

We made it to Amabeda by the afternoon,  during the peak shopping and trading time – from 1 to 3 p.m., after which people start leaving to return to their villages. And we made it in time to watch a cockfight. The murga-ladai is a popular sport and form of entertainment in tribal haats in many parts of India. I have seen it in  Chhattisgarh, Odisha, Andhra Pradesh and Jharkhand. For the villagers, it’s a matter of pride to own a fighter cock and win.

At Amabeda, around 200 men (no women) gather for the big fight, some 50 of them with roosters – the rest as audience who bet among themselves on the fighting cocks. The bets range from Rs. 100 to even Rs. 5,000 (or so they tell me). There are 20-25 bouts, each of about 5-10 minutes, till one of the contestants is grievously injured or killed. The owner of the winner gets the vanquished or killed cock – and has a feast at home later.  When a fight is on, the cheers and roars are akin to those in a kushti akhada , a wresting arena. 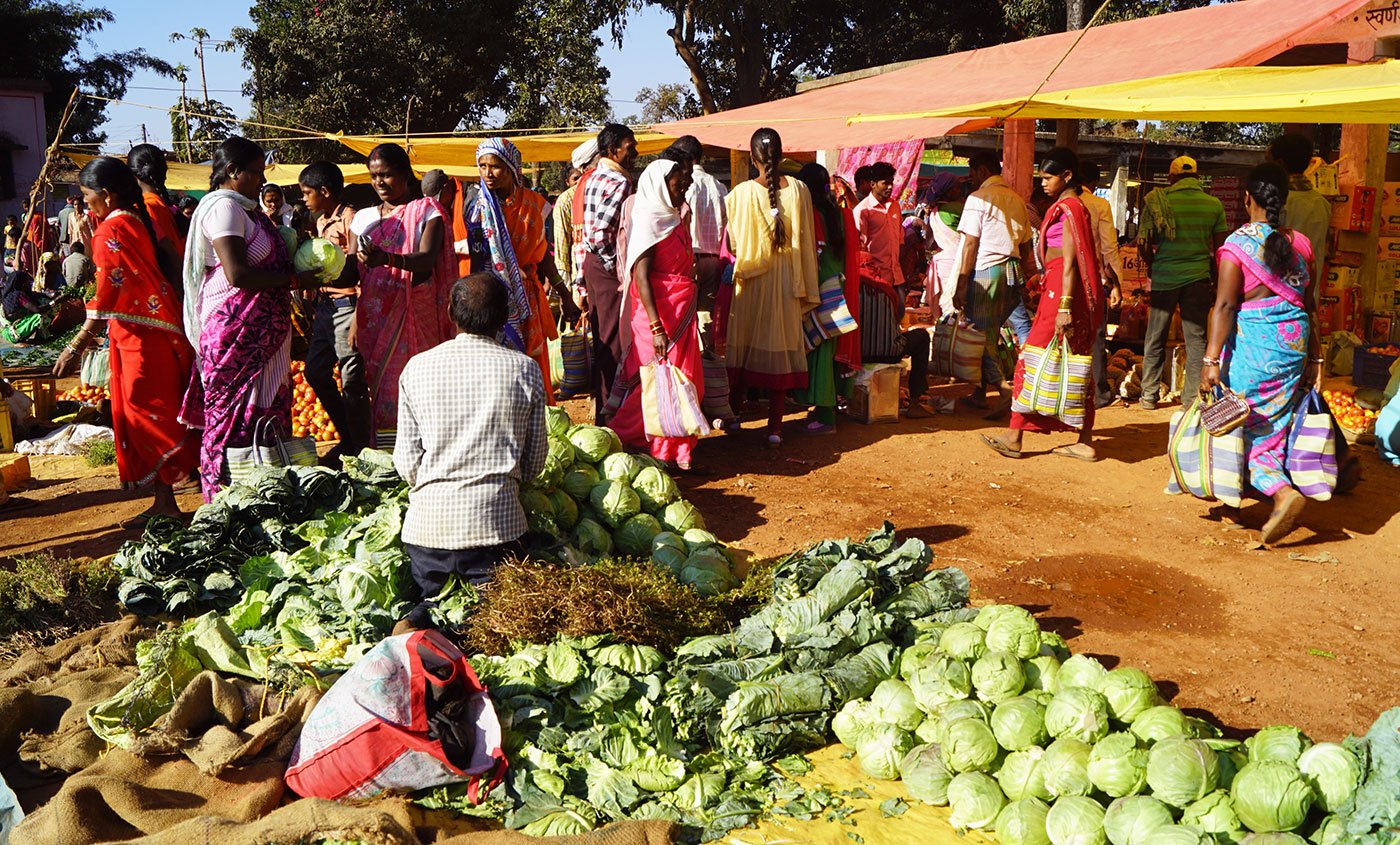 A vegetable vendor from Pakhanjur village has come to Amabeda haat with a large quantity of fresh cabbages, and is awaiting buyers. 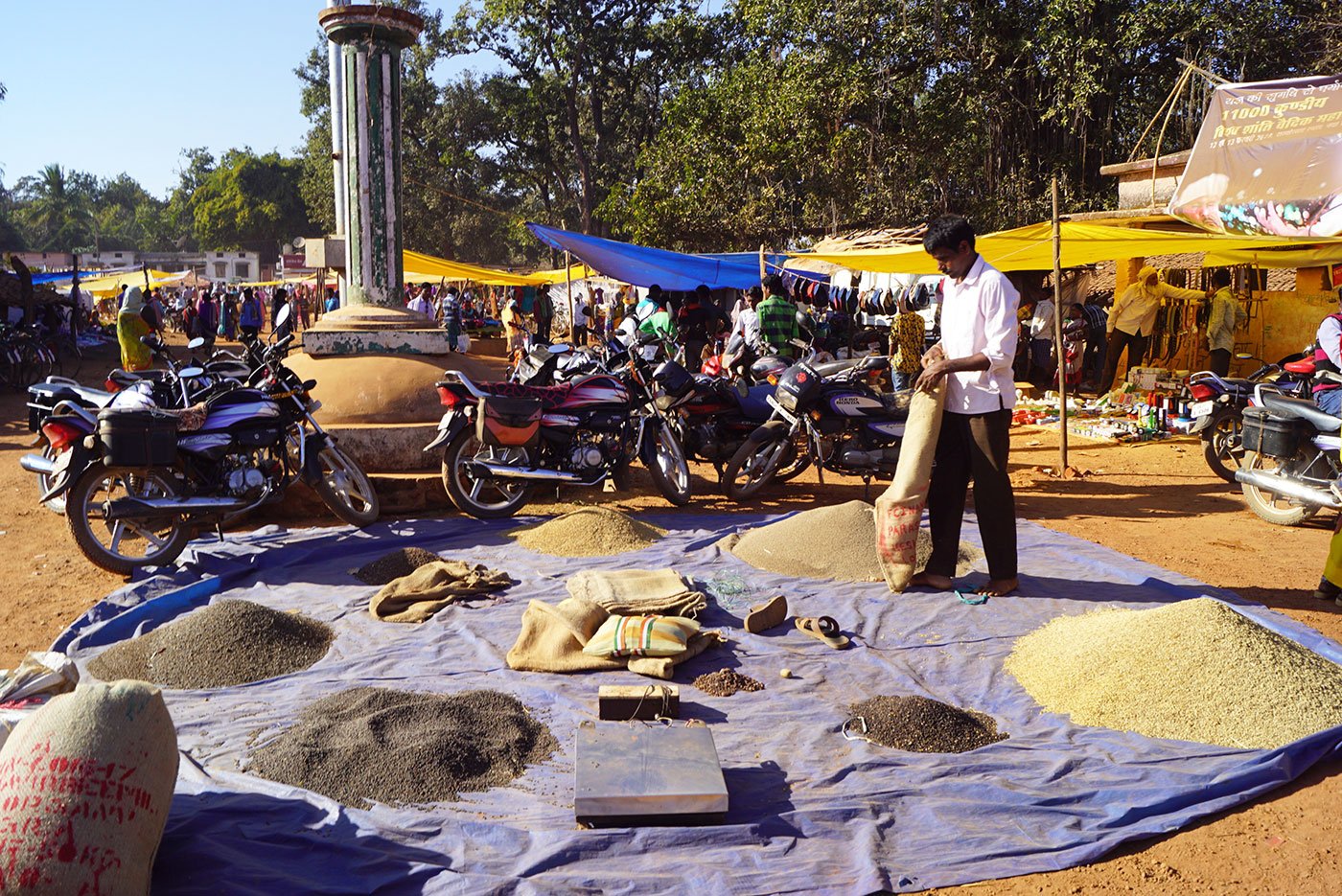 A trader has come to buy grains like kutki ( a millet), which he will sell in Kanker town to bigger traders. Kutki is no longer grown in many parts of the country because of changing food habits and the availability of rice on the public distribution system. 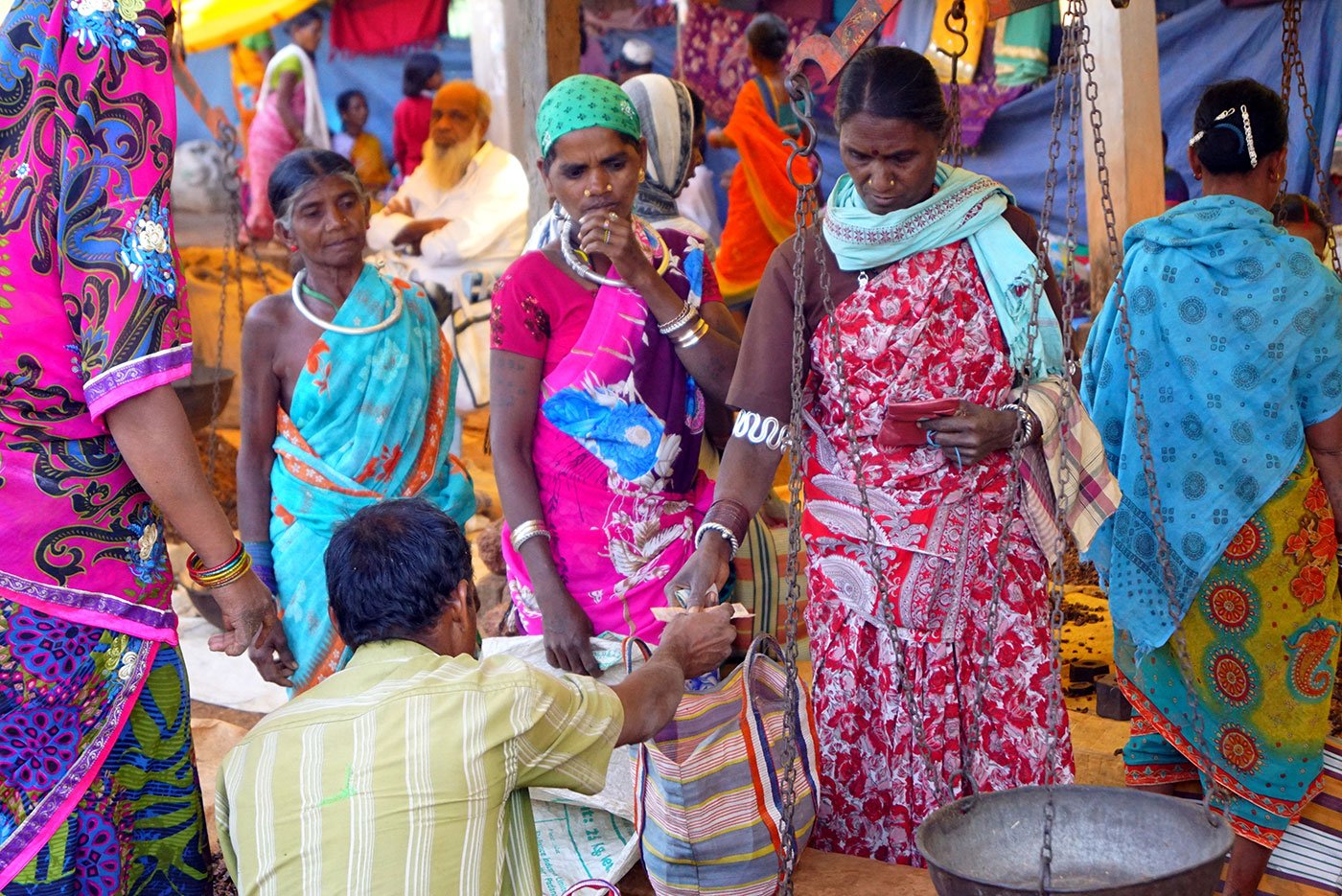 Women sell forest produce, including mahua flowers and lac (a natural resin) to a trader. For them, as well as for the other Adivasis gathered here, the haat is also a place to meet friends and relatives, and share news about marriage, festivals, births, deaths. 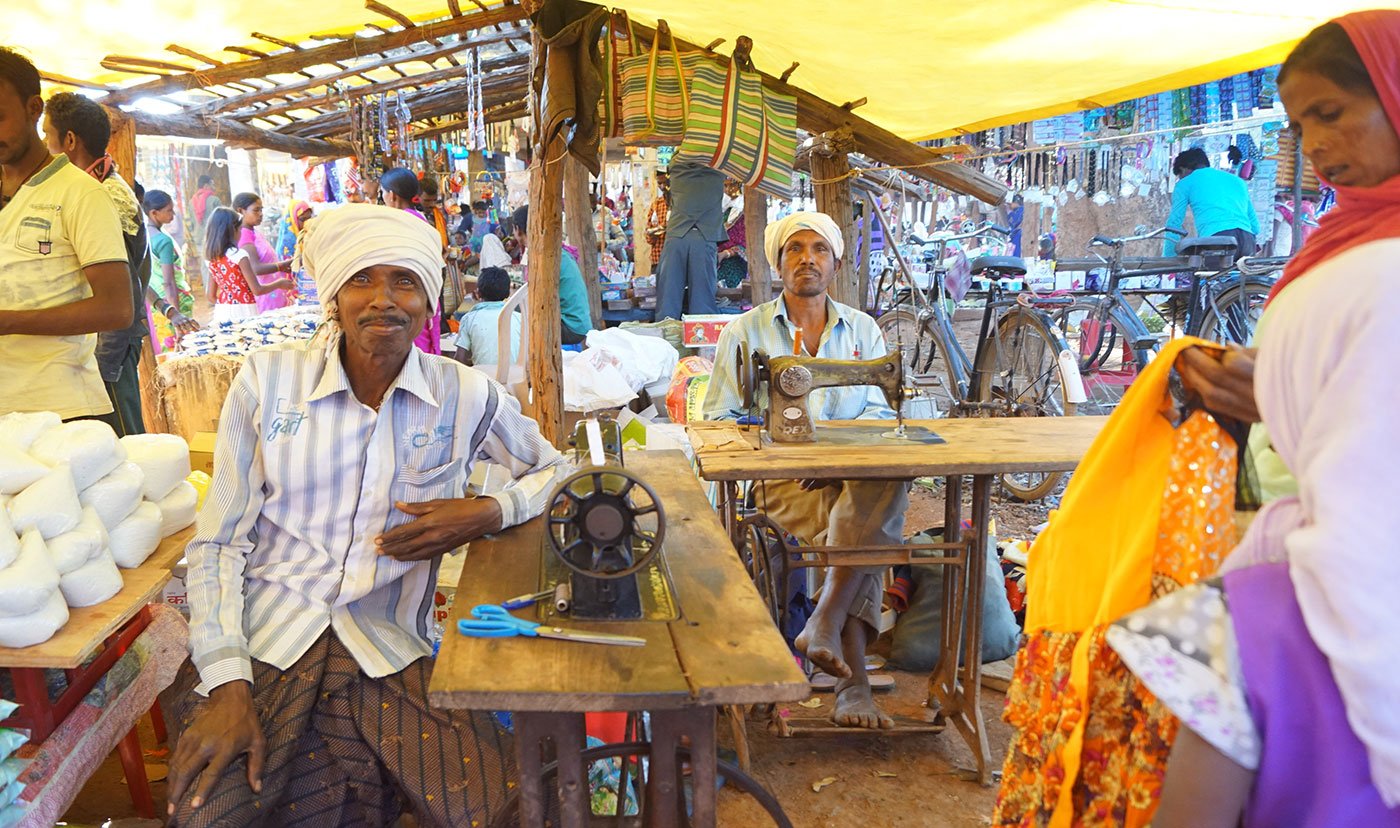 Massuram Padda (at the back) from Bagjhar village and Ramsai Kureti have brought their sewing machines here on bicycles. They will alter and repair torn clothes at the haat , and make around Rs. 200-300 each in the course of the day. 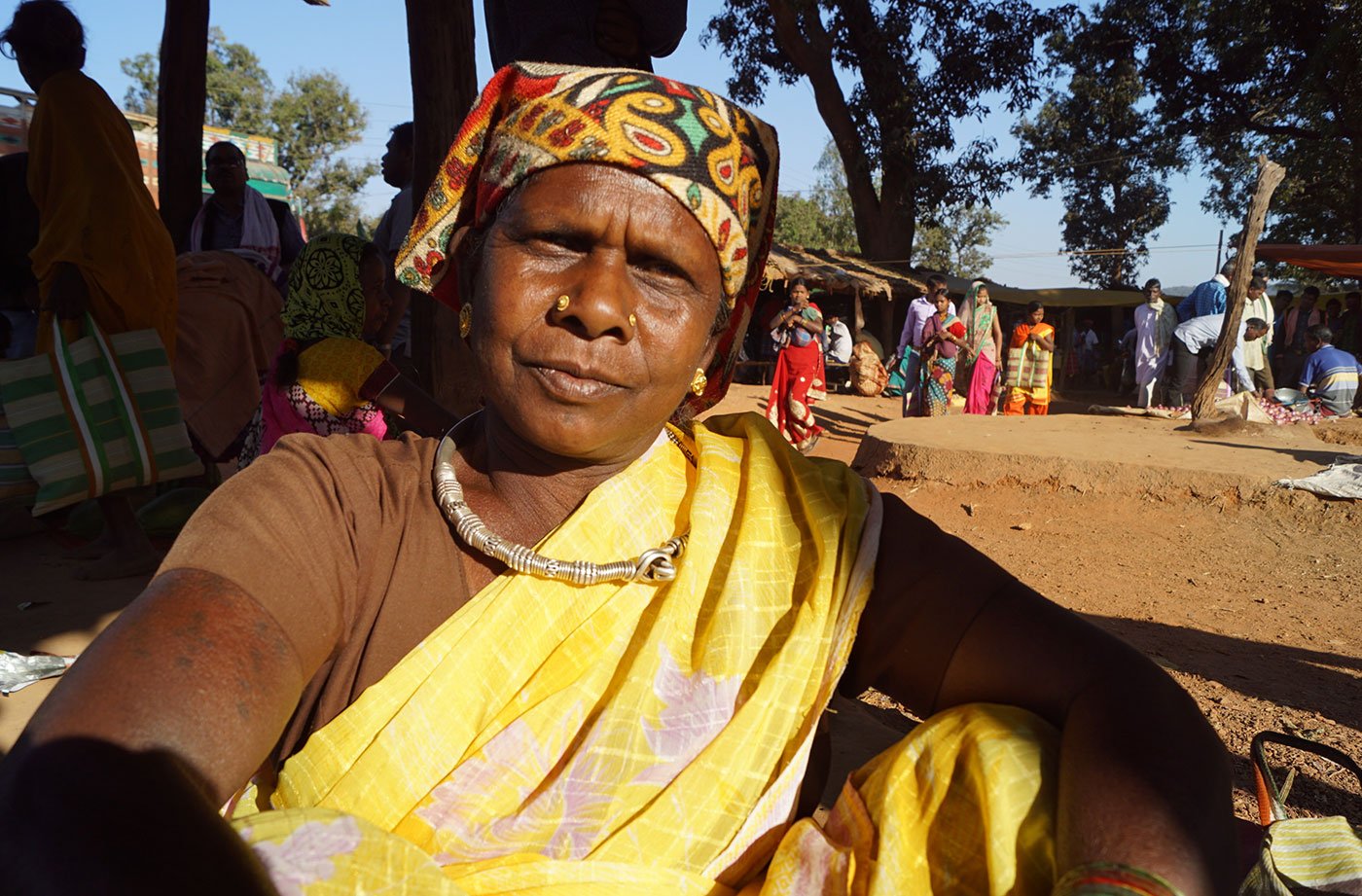 Mibai from Suklapal village has been coming to this market since she was a child. Today, she is selling beans and will buy some things to take home as well. 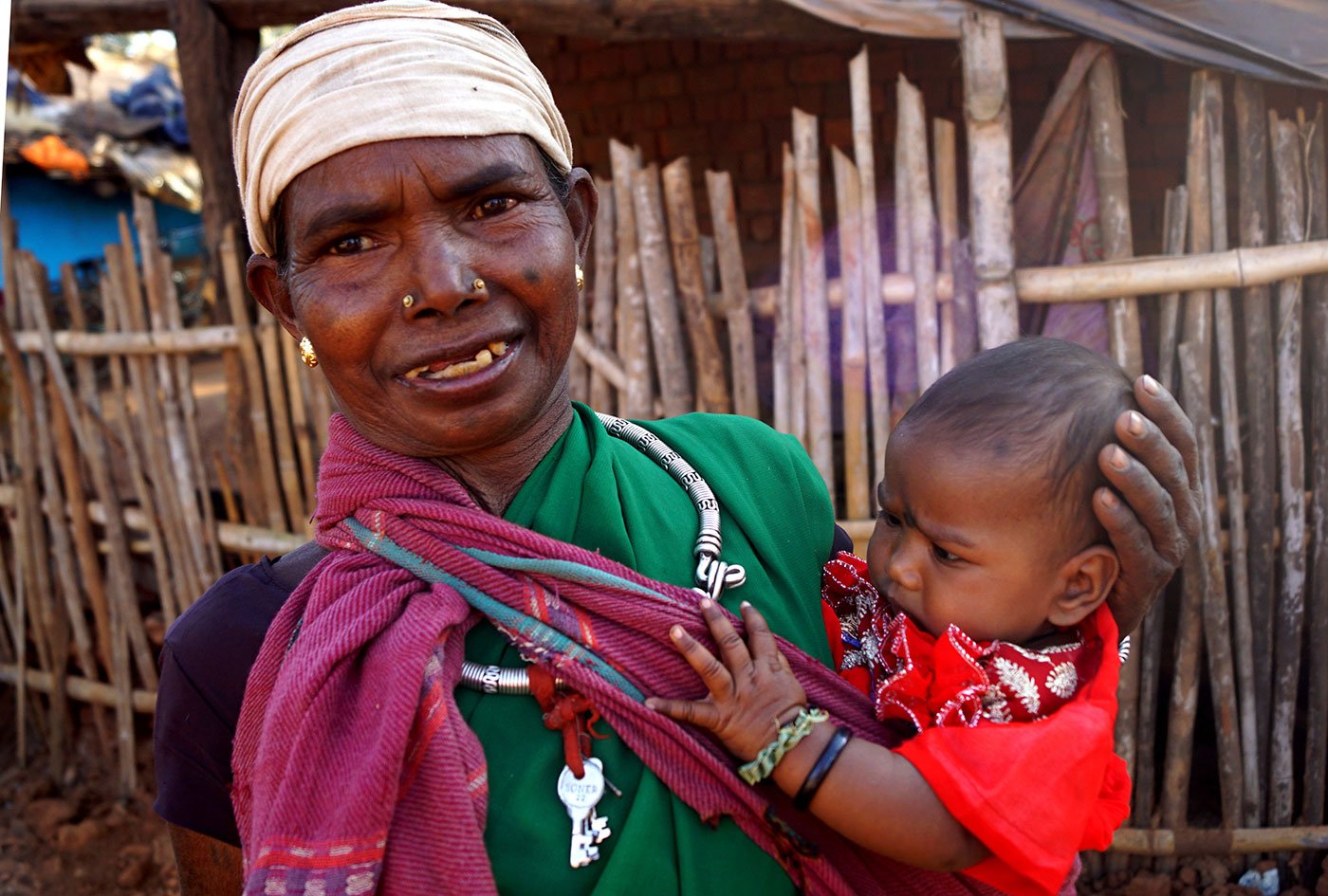 Jungleebai (she didn’t give her full name) has brought her little grandson for the first time to the haat; they’ve come from Suklapal village in Antagarh block, around four kilometres away. 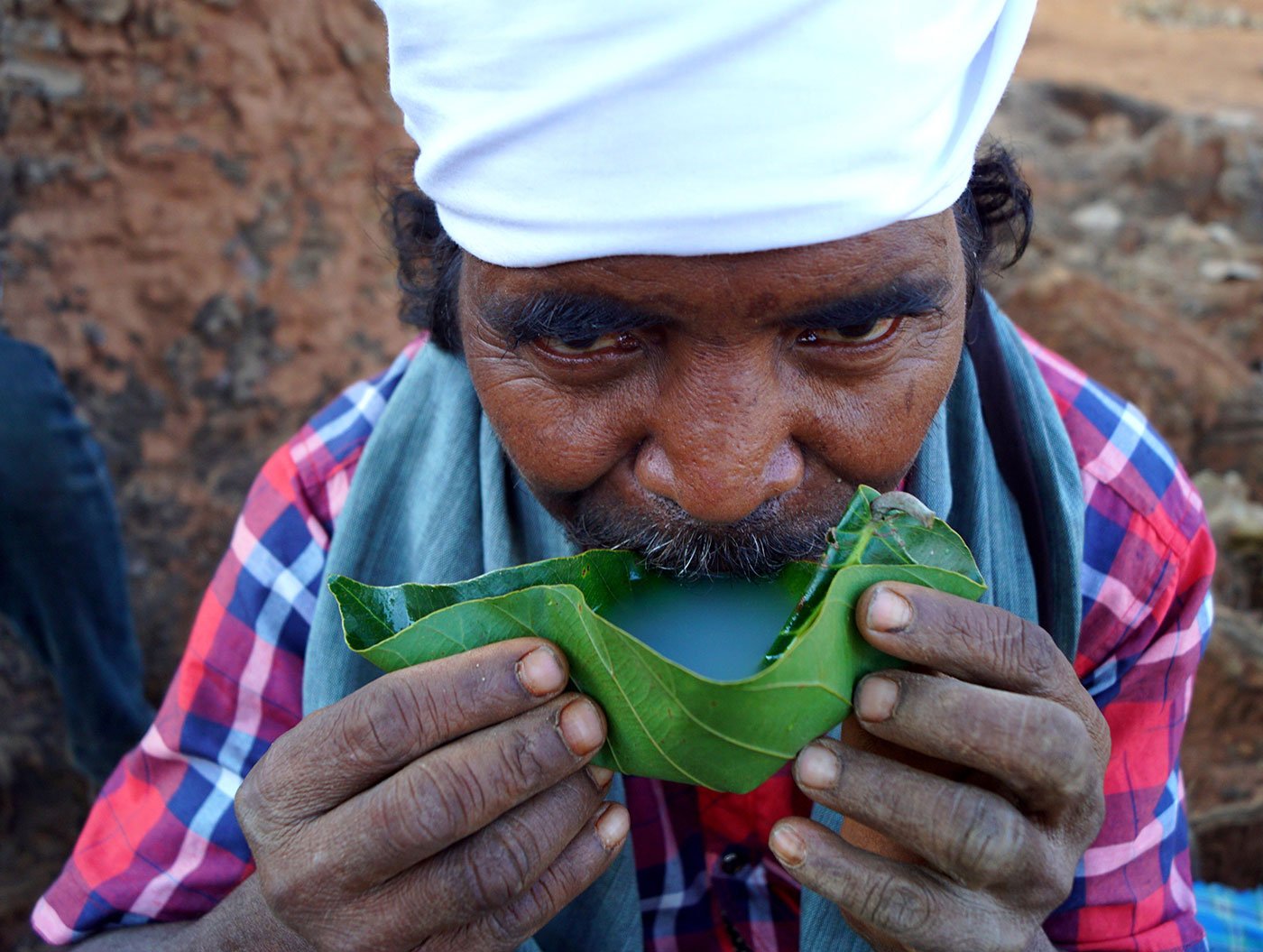 When they meet each other, people at the haat often offer relatives and friends some mahua wine, made from flowers collected from the forest. 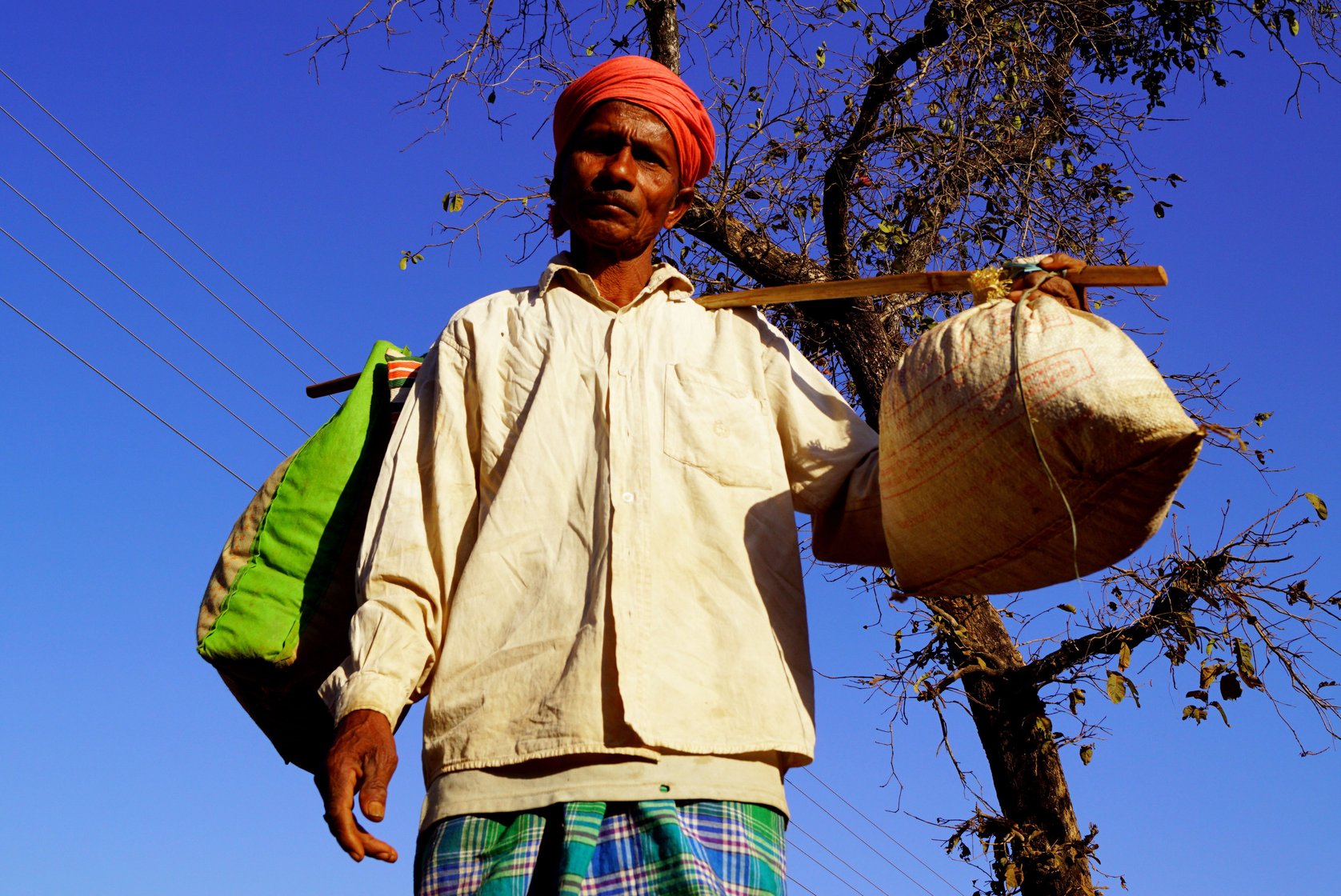 Itwaru, a farmer and farm labourer from nearby Kohchur village, is here to purchase mahua flowers and grapes to make wine. 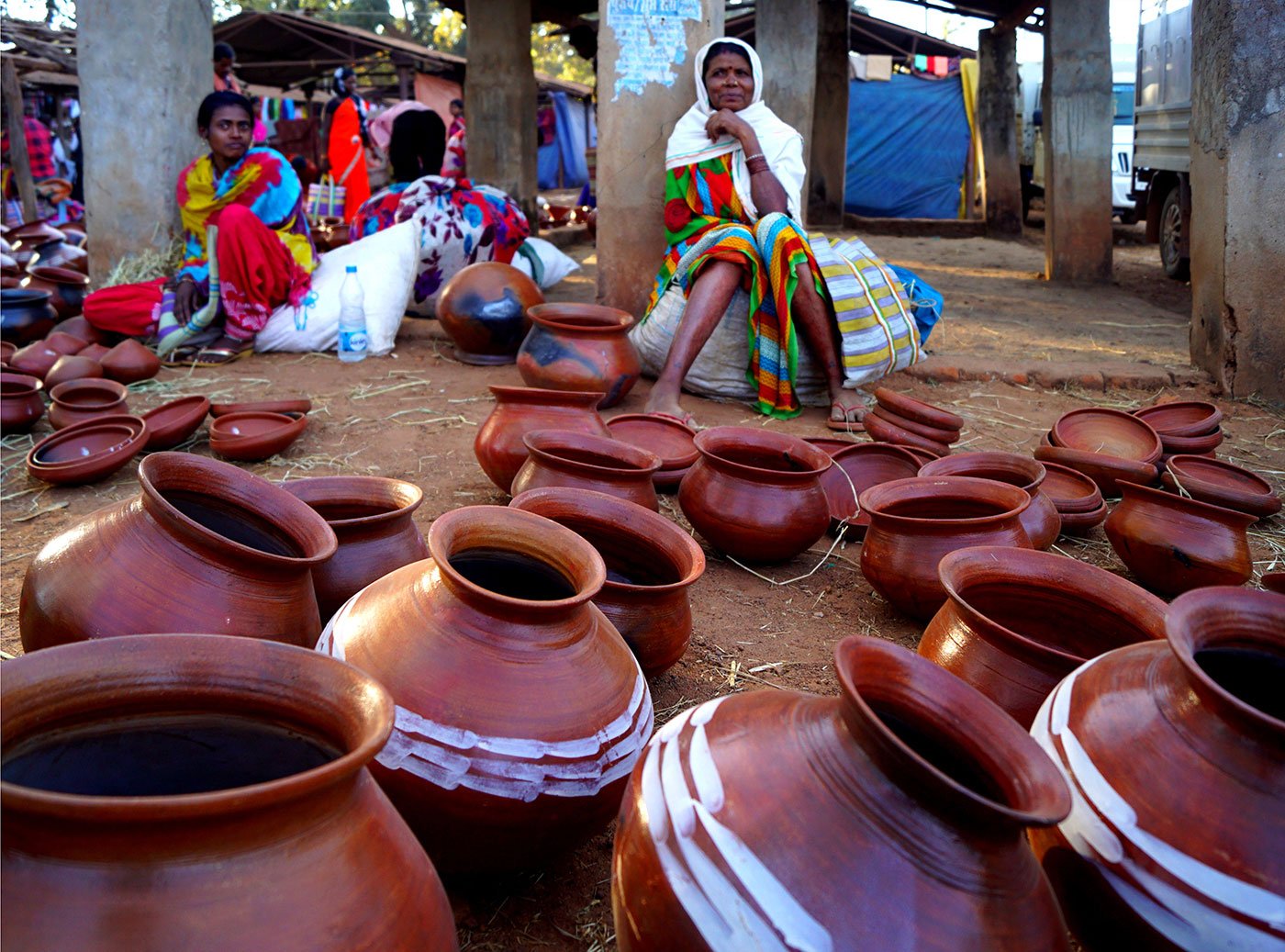 Two Gond Adivasi women wait with their pots for customers. 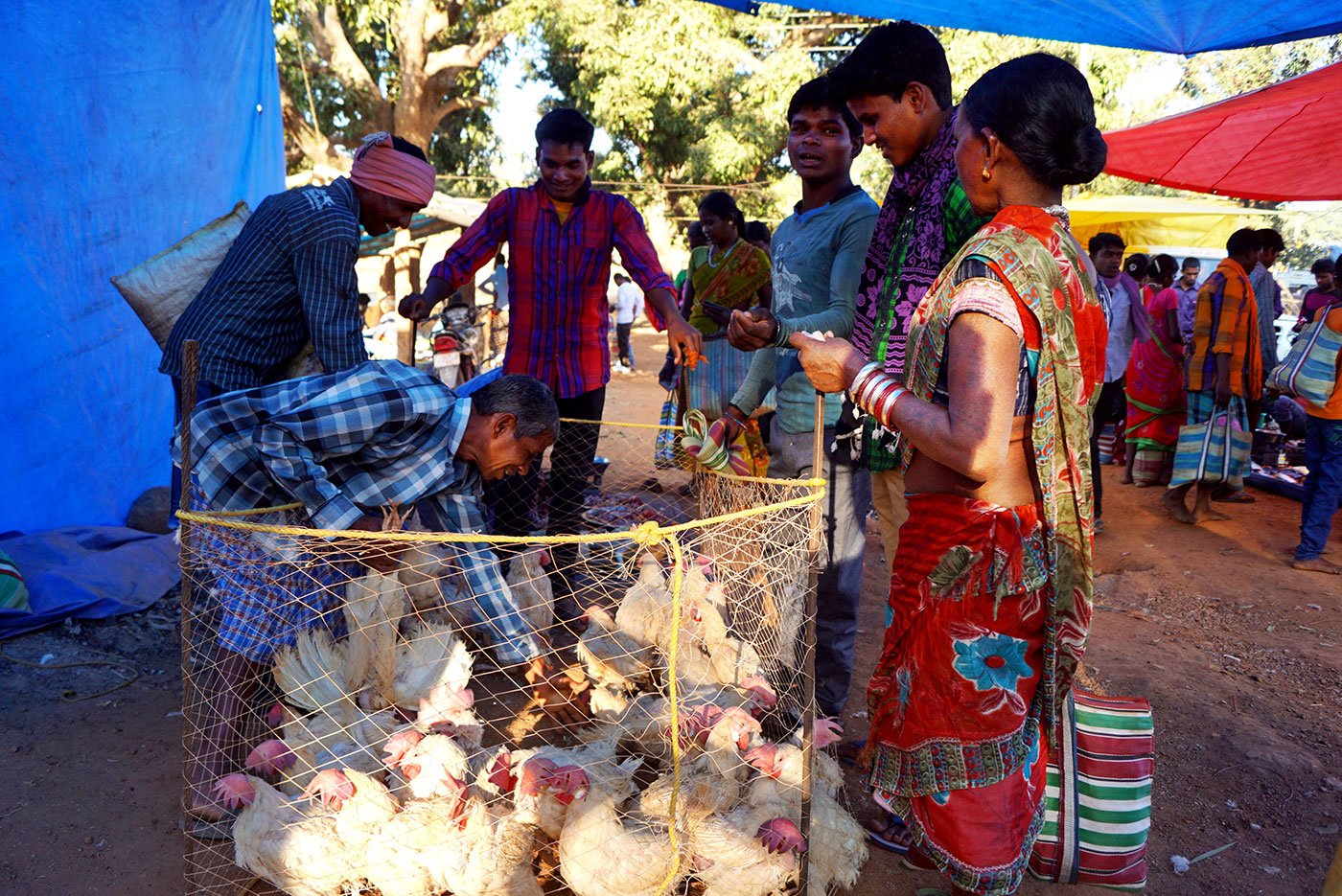 These days, broiler chicken is popular at the haat because it is cheaper than desi (country) chicken. 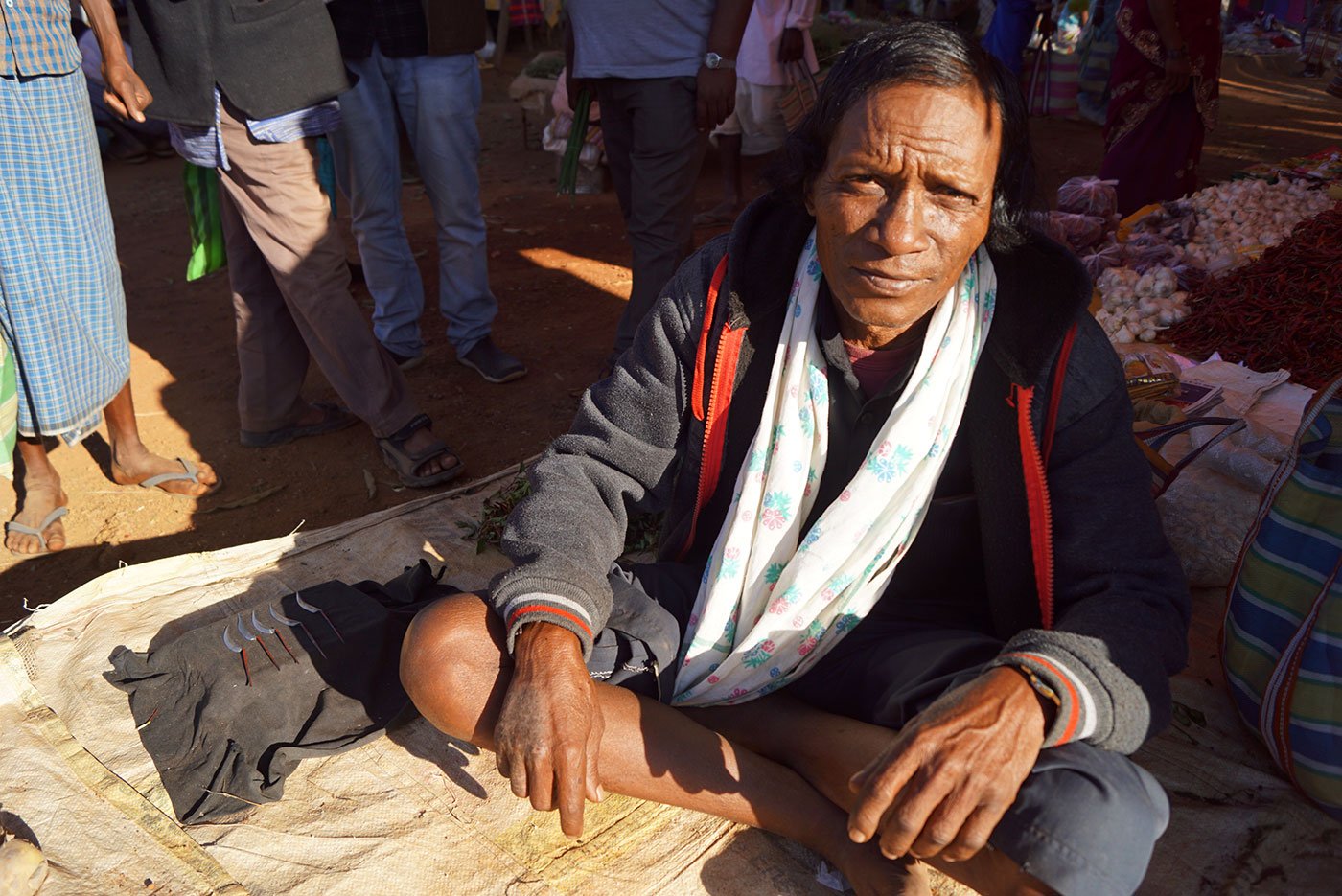 Brij Lal, an ironsmith from Bandapal village in Antagarh block, sells the blades attached to cocks’ claws during a fight. He prices them at Rs. 100 because, he says, “it takes a lot of hard work to make it sharp.” 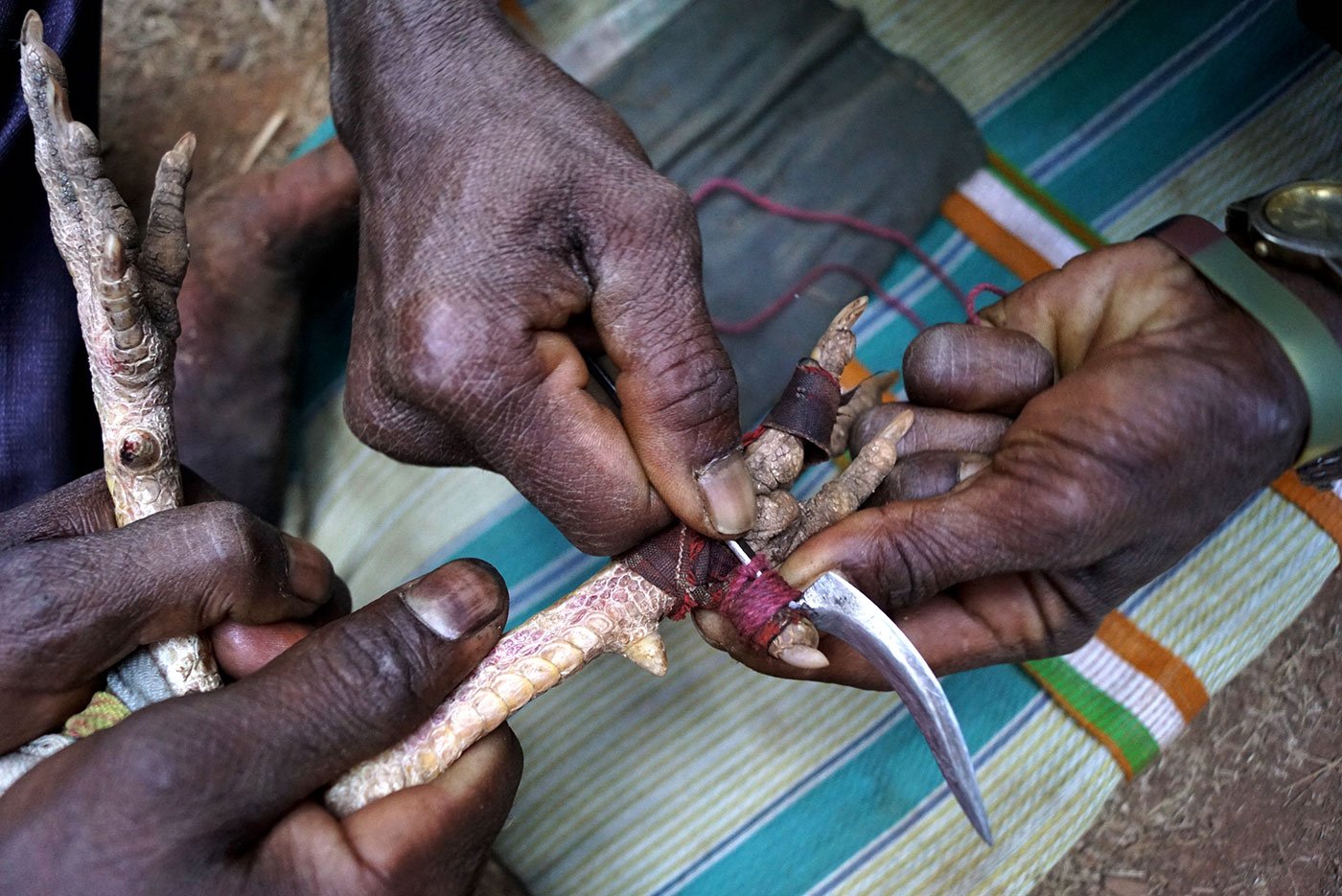 The lethal blades are attached to a rooster's claws, readying the unsuspecting bird for the big fight. 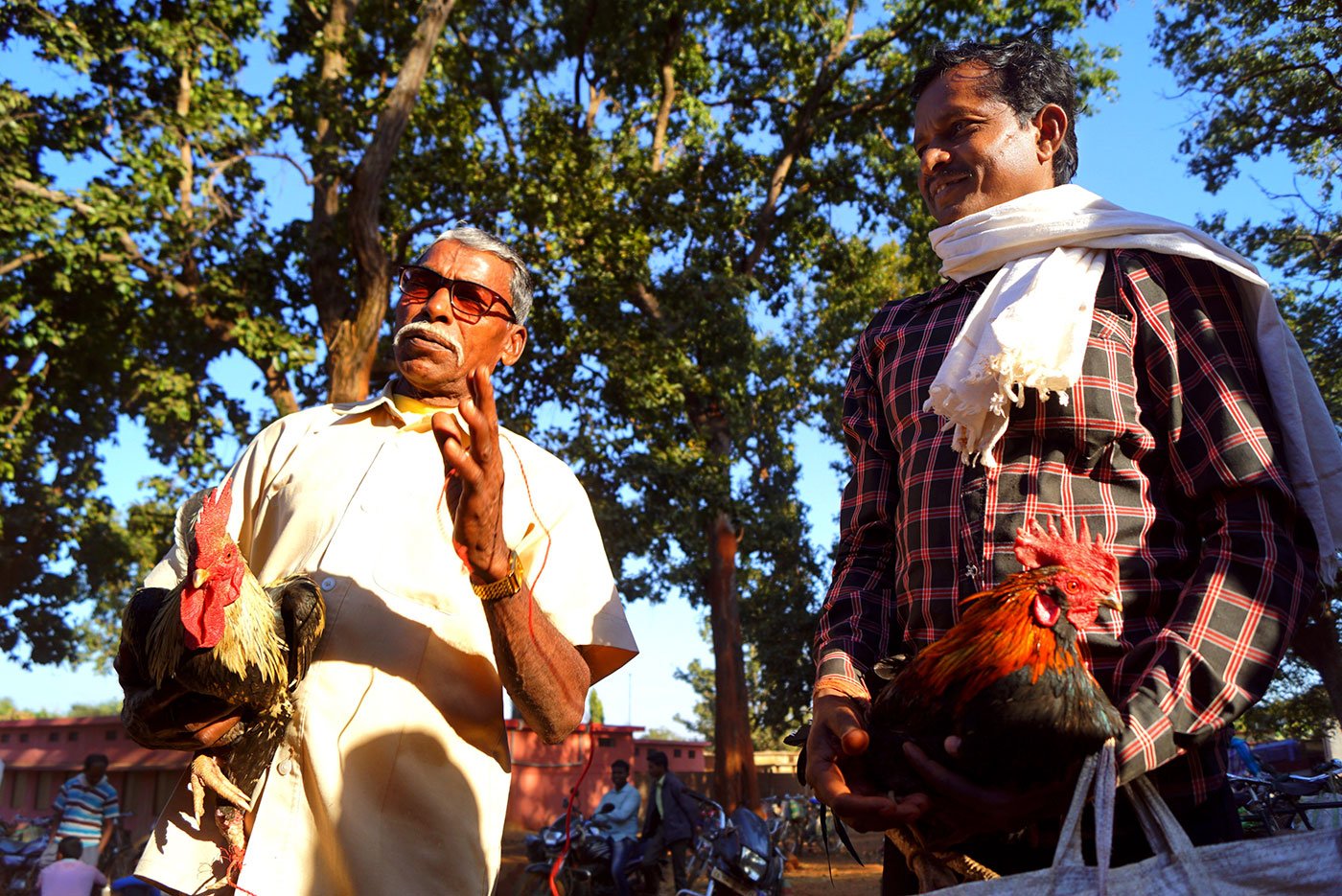 Ramchand Samrath (left, in white) from Amabeda village and Baiju, from Mankot village, wait for their roosters to be paired before the fight. 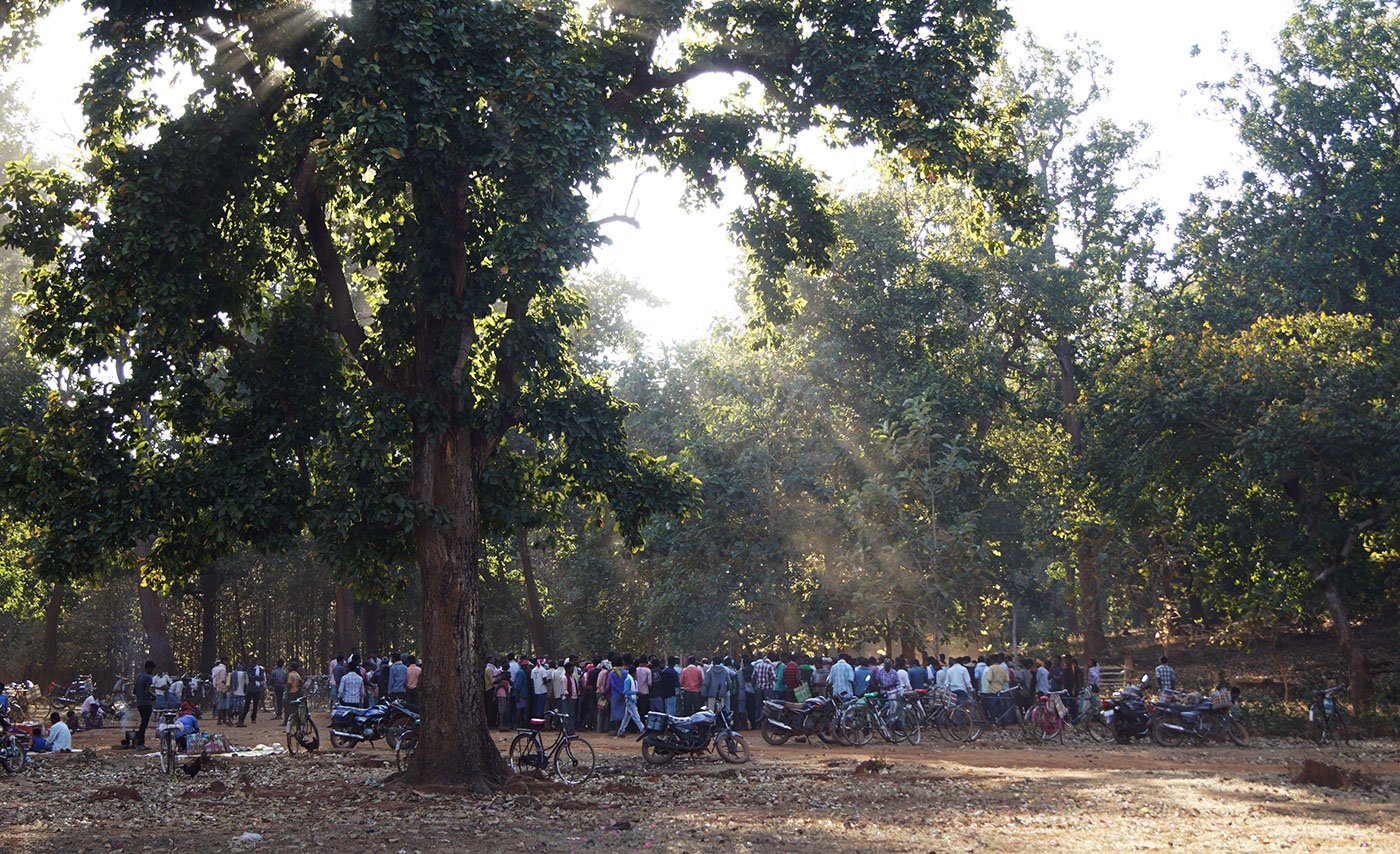 Around 200 men gather around the arena to watch the exciting and boisterous murga ladai. Then, at the end of the day, some people walk back to their villages, others board trucks with standing room only.