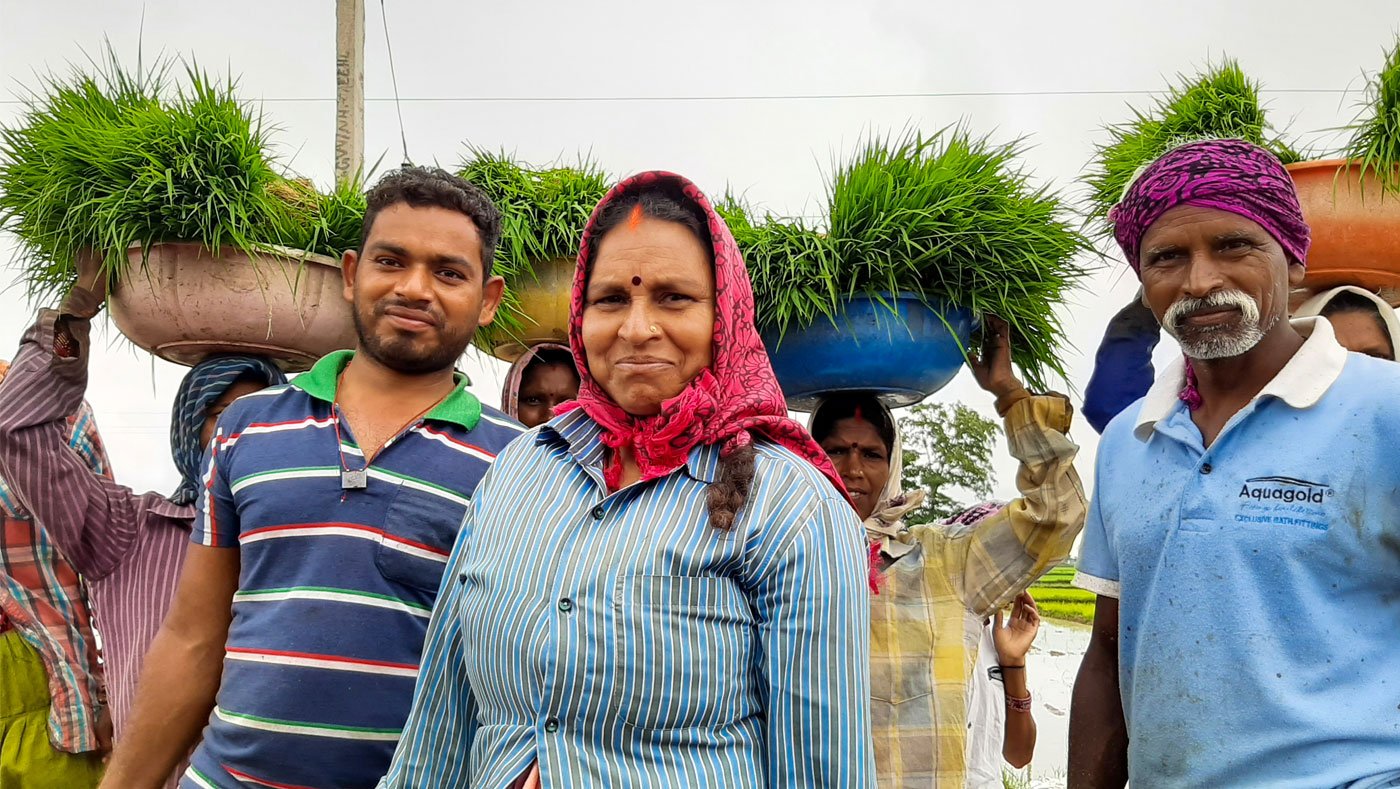 ‘If we don’t work, who'll produce the harvest?'

With kharif cultivation of paddy underway, labourers are back in the fields of Dhamtari in Chhattisgarh. They know about Covid-19 precautions, but say they can't afford to not work

“We know about corona, but we can’t stop working. We have to work for farmers. Farming is the only hope for us and the farmer. If we don’t work, then how do we survive?” said Shubhadra Sahu.

Shubhadra is a thekedarin (contractor), who leads a team of 30 women, all farm labourers, from Baliyara village, roughly five kilometres from Dhamtari town in Chhattisgarh.

We met them one afternoon, around July 20, on a road running between paddy fields, where a tractor had dropped them off. They were on their way to work from one field to another, and in a hurry – the sowing of paddy saplings had to be done before sunset.

“We earn 4,000 rupees per acre,” Shubhadra said, “and together manage to plant saplings on two acres every day.” That’s a daily wage of around Rs. 260 for each labourer in the group.

This is the time of kharif cultivation of paddy, and they had planted, when we met, around 20-25 acres. This work will continue for a few more days. 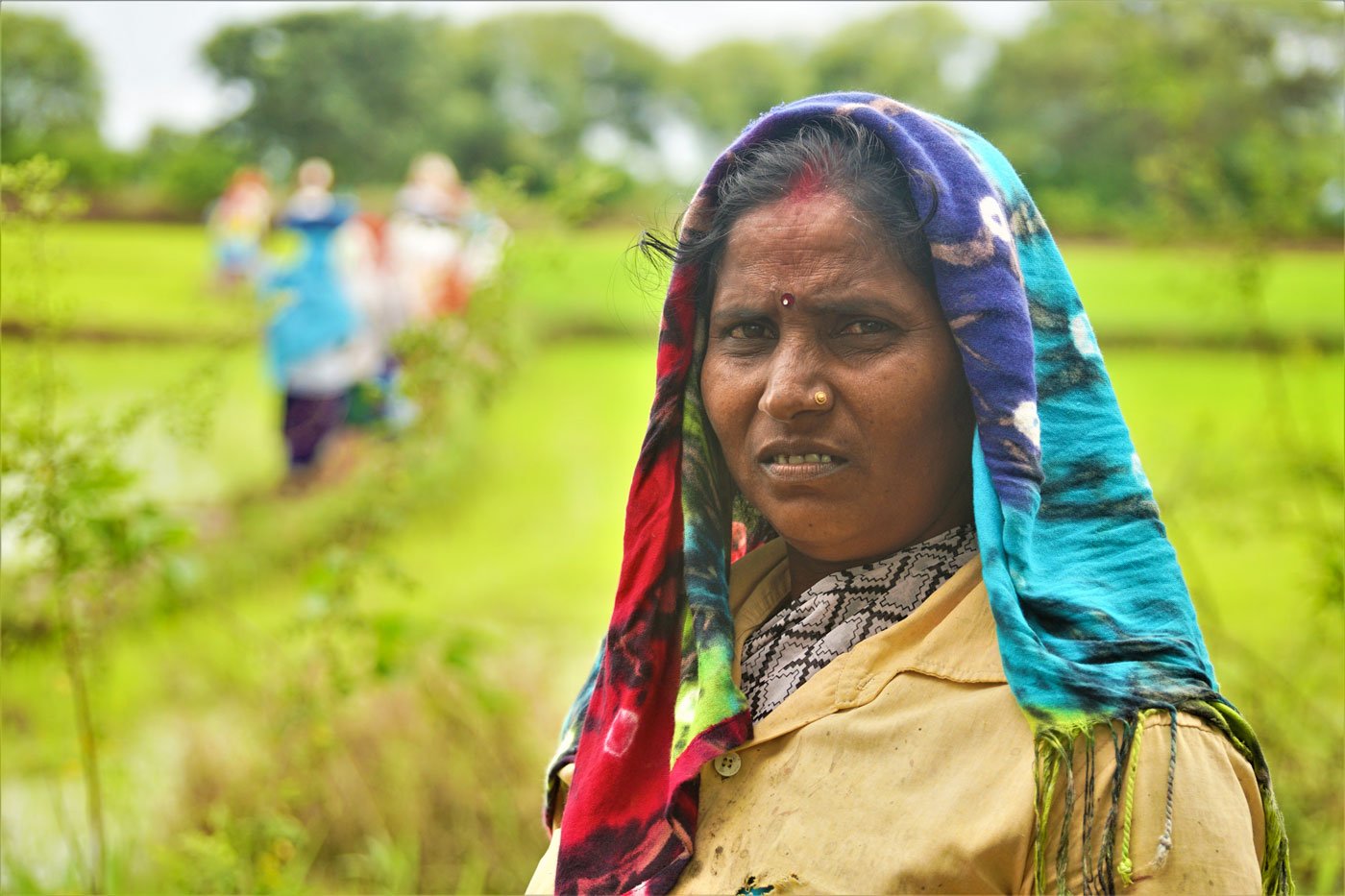 Shubhadra Sahu, a labourer and thekadarin (contractor) from Baliyara village: 'If we don’t work, then how do we survive'

On another day around mid-July, on the Koliyari-Kharenga village road, around 15 kilometres from Dhamtari town, we met another group of farm labourers. “If we don’t work, we will die of hunger. We cannot afford the luxury of staying safe at home [due to the risk of Covid-19],” said Bhukhin Sahu from Kharenga village of Dhamtari block. She is the leader-contractor of a group of 24. “We are labourers and we have only our hands and legs. But while working, we are maintaining physical distance…”

She and the others were sitting on both sides of the road and eating a lunch of rice, dal and sabzi , which they had brought from home. They wake up at 4 a.m., cook, compete household tasks, have a morning meal and reach the field at around 6 a.m. They return home 12 hours later, by 6 in the evening. Then cook again and do other work, said Bhukhin, about her and the other women’s work day.

“We plant about two acres every day, and get 3,500 per acre,” Bhukhin said.  This per-acre group rate varies, from Rs. 3,500 to Rs. 4,000 (this season, in Dhamtari) and depends on negotiations and the number of workers in a group.

Bhukhin’s husband went to Bhopal some years ago to work as a labourer and never returned. “He left us behind in this village. He is not in contact with us,” she said. Her son is in college, and Bhukhin’s is the only income that sustains her family of two.

On the same road, we met another group of farm labourers – most of them women, a few men – carrying paddy saplings to a field for planting. “This is our source of livelihood. So we have to work. If we don’t work, who will produce the harvest? Everyone needs food to eat,” said Sabita Sahu, a contractor from Darri village of Dhamtari block. “ If we will fear corona, we will not able to work at all. Who will then feed our children? And our work is such that we maintain distancing anyway [in the paddy fields].” By mid-July, when I met them, Sabita and her group of 30 had planted paddy saplings in 25 acres to earn Rs. 3,600 per acre. 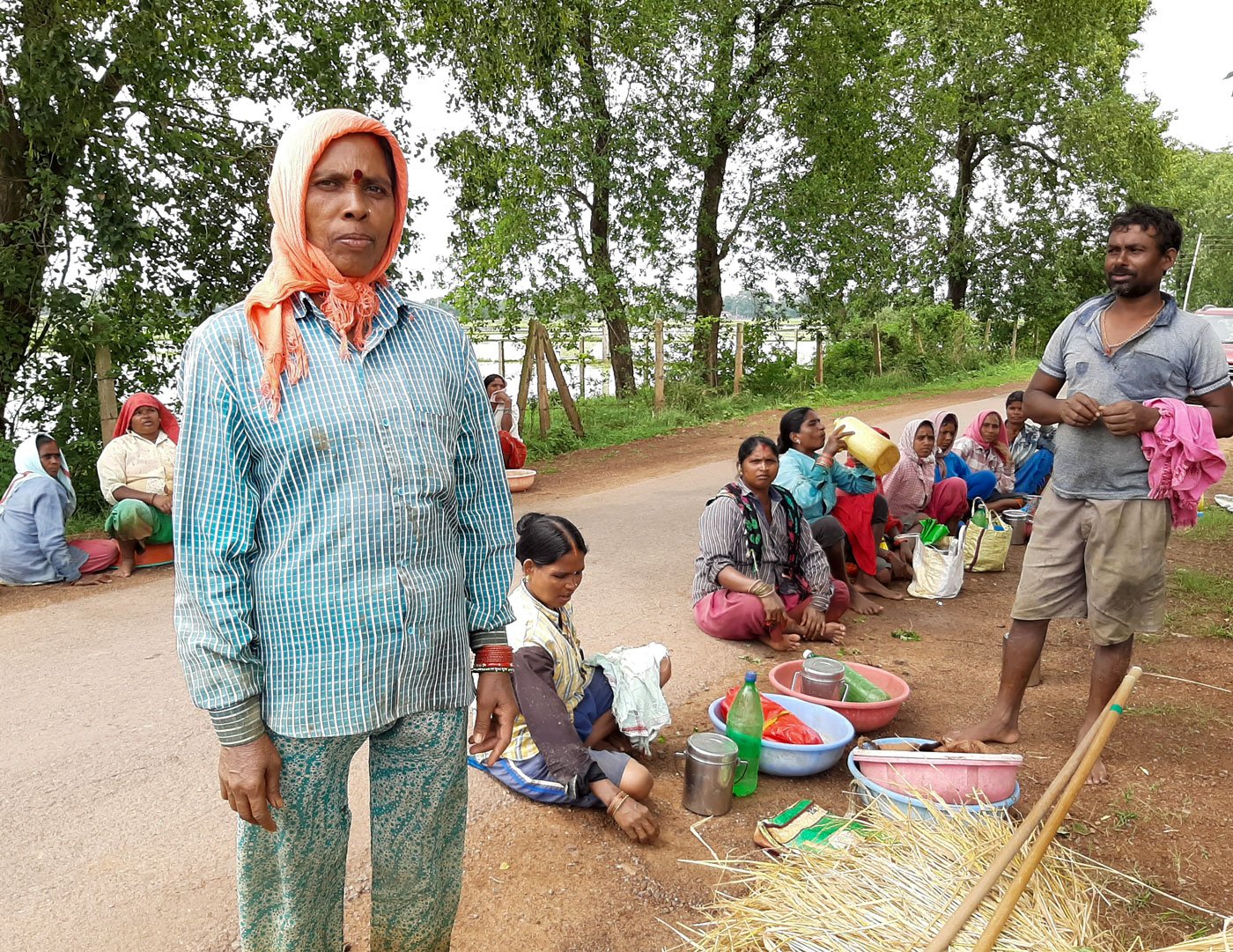 Bhukhin Sahu from Karenga village tells me, 'We are labourers and we have only our hands and legs...'

“There was no work [during the peak lockdown period]. At that time everything shut down. Then the kharif season came and we are back at work,” said Hiraundi Sahu, a farm labourer from Kharenga village.

Around 1,700 people returned to Dhamtari district from different parts of country during the lockdown, until around July 20, an official at the labour department in Dhamtari told me. These included students, people with jobs, and roughly 700 migrant labourers. Chhattisgarh has so far reported around confirmed 10,500 Covid-19 cases. Dr. D. K. Ture, chief medical and health officer, Dhamtari, told me the district has  48 known cases of Covid-19 so far.

In the same group as Hiraundi was also Chandrika Sahu from Darri village. She has two daughters and a son; one is in college, two are in Class 10 and 12. “My husband was a labourer too, but one day he had an accident and broke his leg,” she said. “He could not work after that and committed suicide three years ago.” Chandrika and her children manage entirely on her earnings; she gets a widow pension of Rs. 350 a month, and the family has a BPL ration card.

All the labourers we spoke too knew about Covid-19; some said they didn’t care, others said that while working they anyway stood at a distance from each other, so it was fine. “We are working directly under sun, so we have less chances of getting corona,” said Bhujbal Sahu, a male labourer in Sabita’s team. “Once it affects you, it will kill you,” he added. “But we don’t fear it because we are laborers.”

The sowing and planting of paddy, he said, will continue for roughly 15 days. “There will be no work after that.” Dhamtari and Kurud are the only blocks in the district with some irrigation, so farmers here cultivate two rounds of paddy, and farm work is available for two seasons. “We need more work,” Bhujbal added. 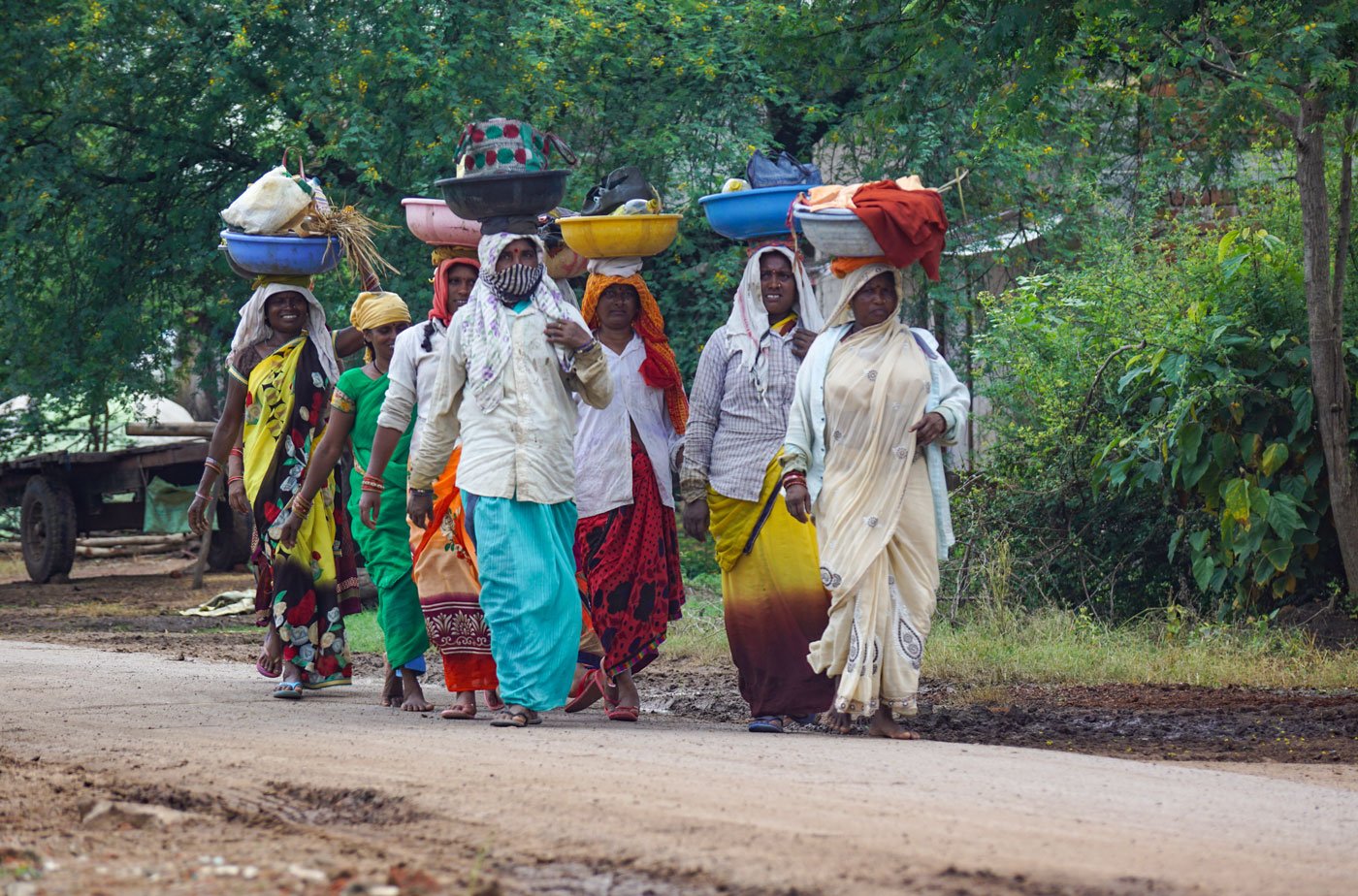 Labourers from Baliyara village, not far from Dhamtari town, on their way to paddy fields to plant saplings 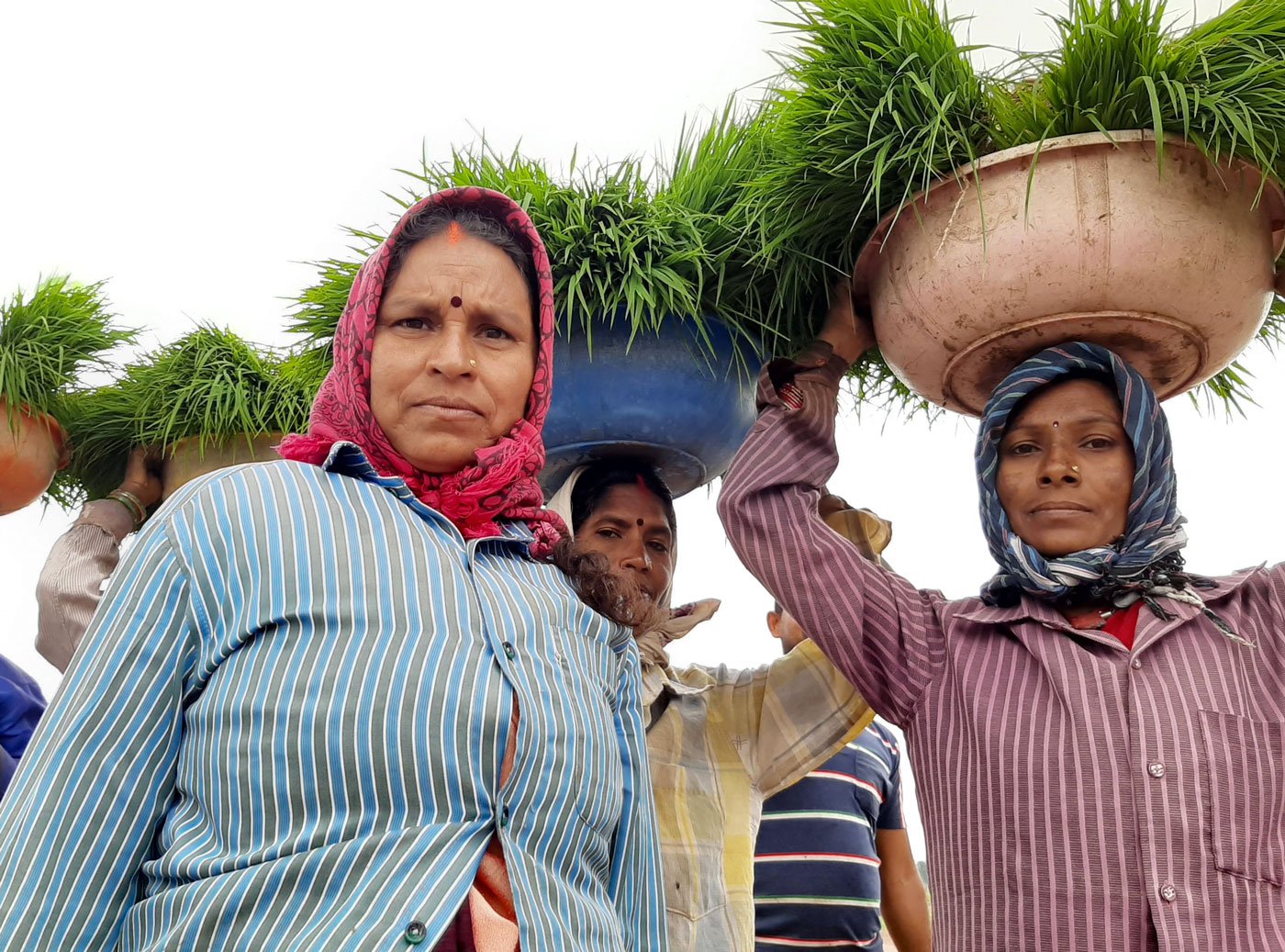 'Everyone needs food to eat', said Sabita Sahu', a contractor from Darri village. 'If we will fear corona, we will not able to work' 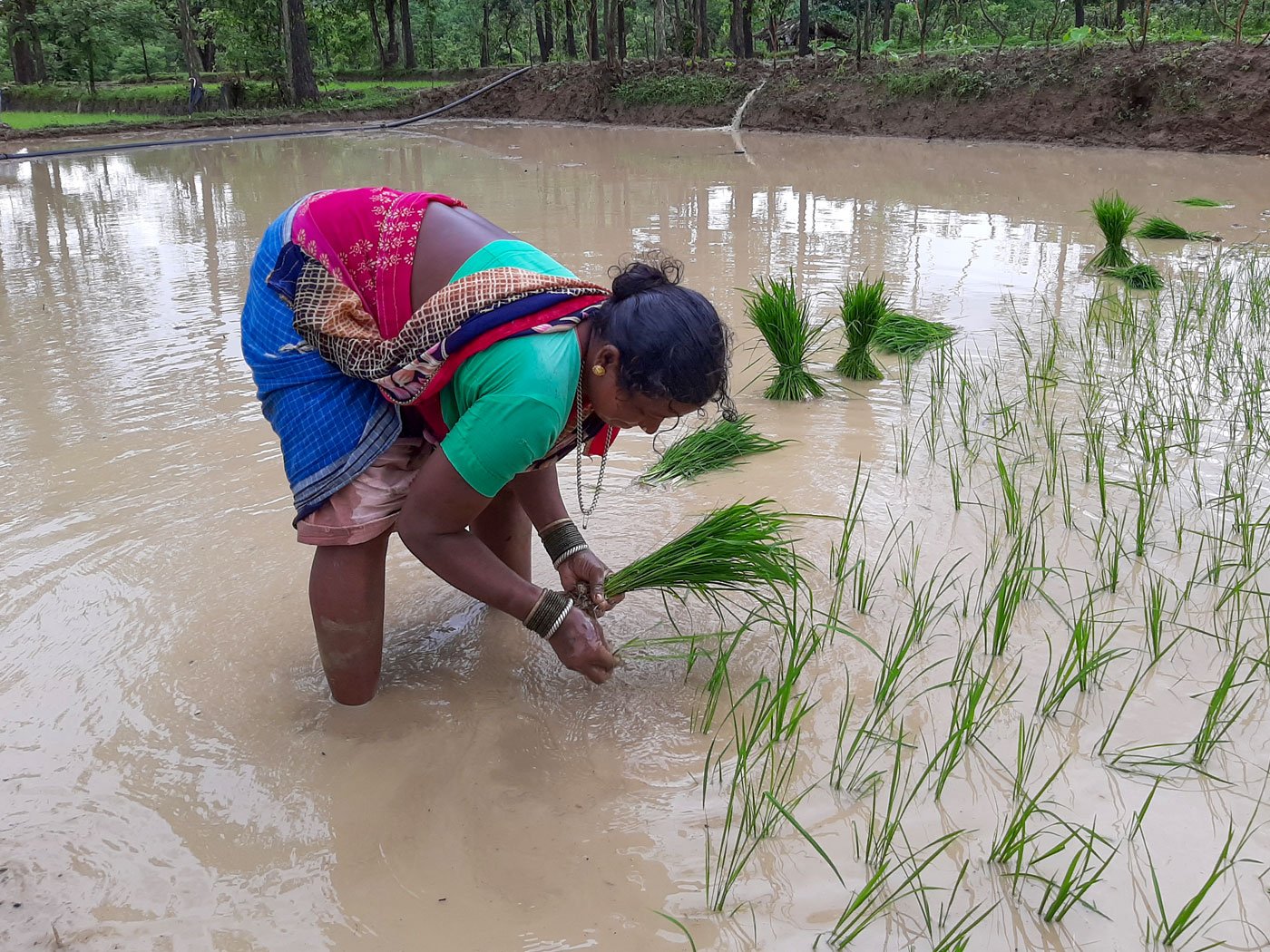 'We earn 4,000 rupees per acre, and together manage to plant saplings on two acres every day' 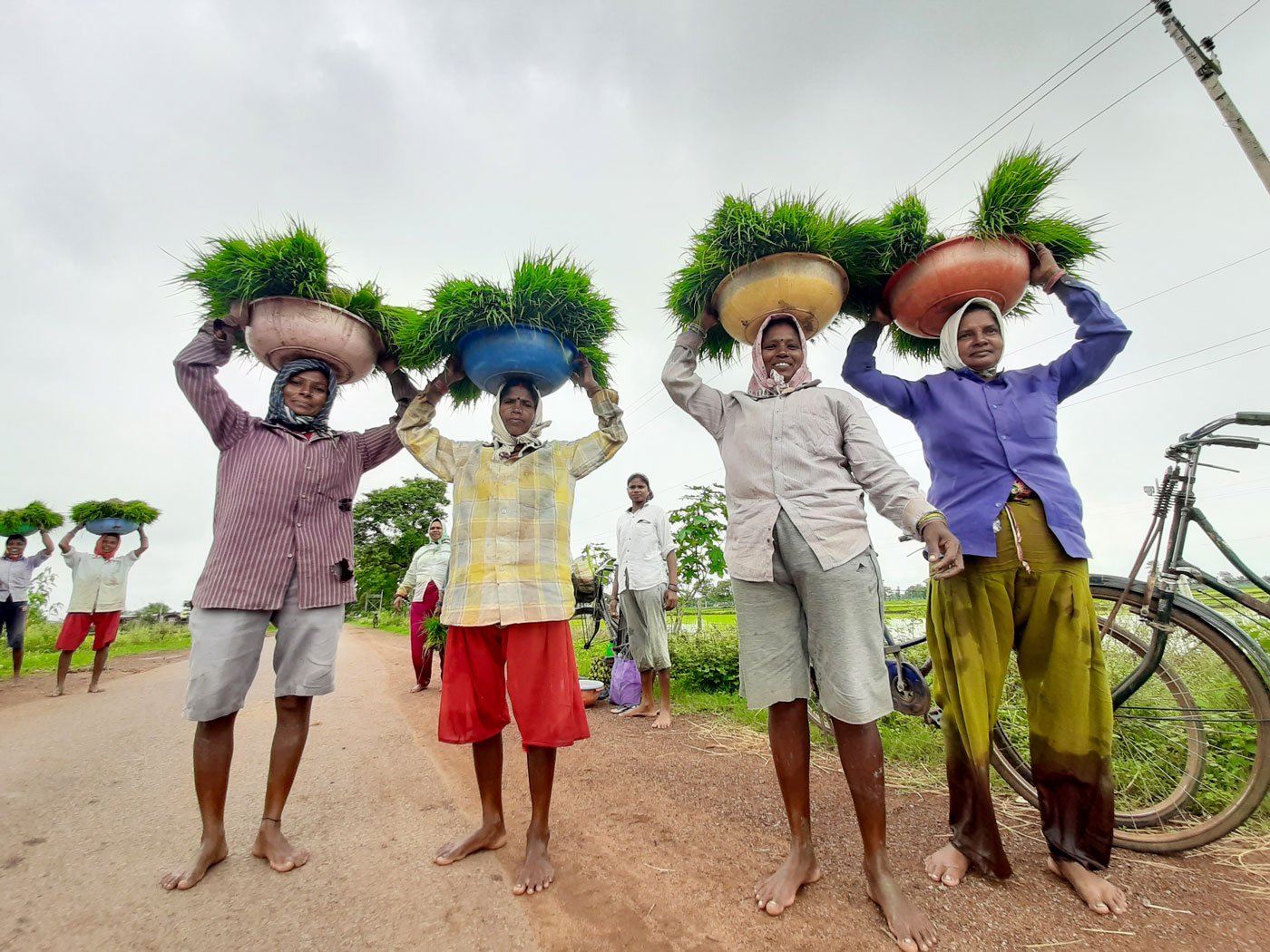 That’s a daily wage of around Rs. 260 for each labourer in the group 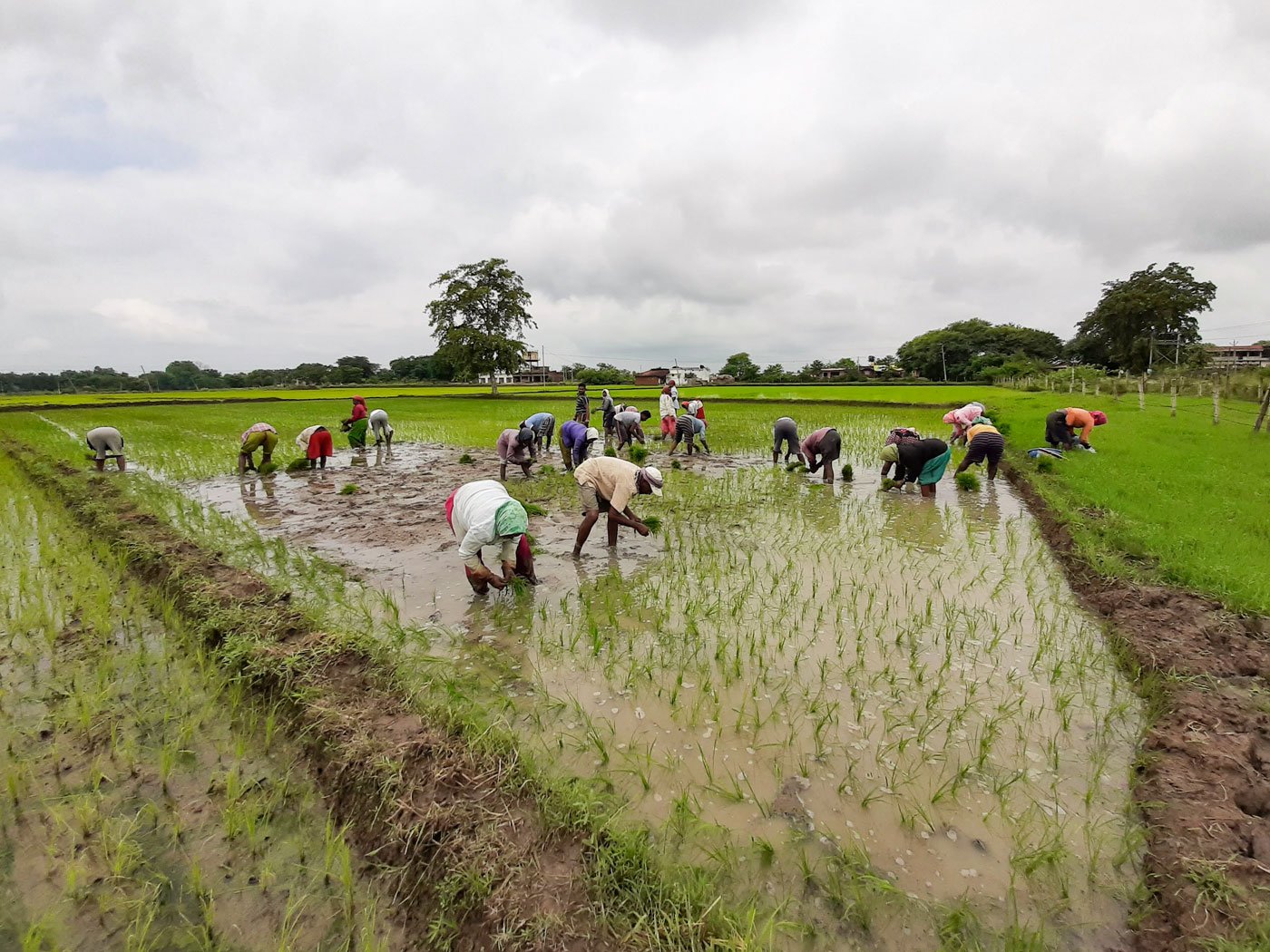 All the labourers we spoke too knew about Covid-19; some said they didn’t care, others said that while working they anyway stood at a distance from each other, so it was fine 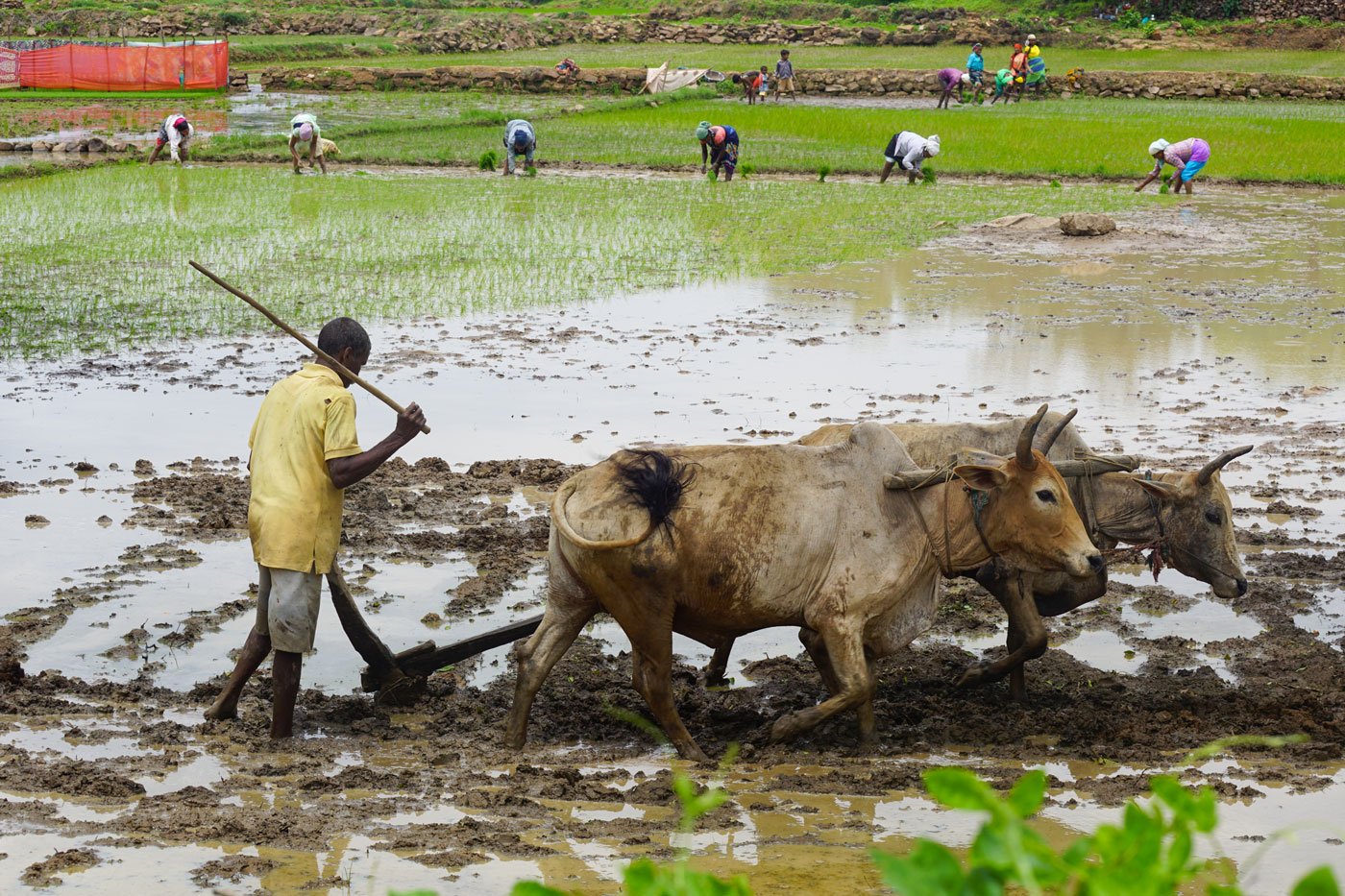 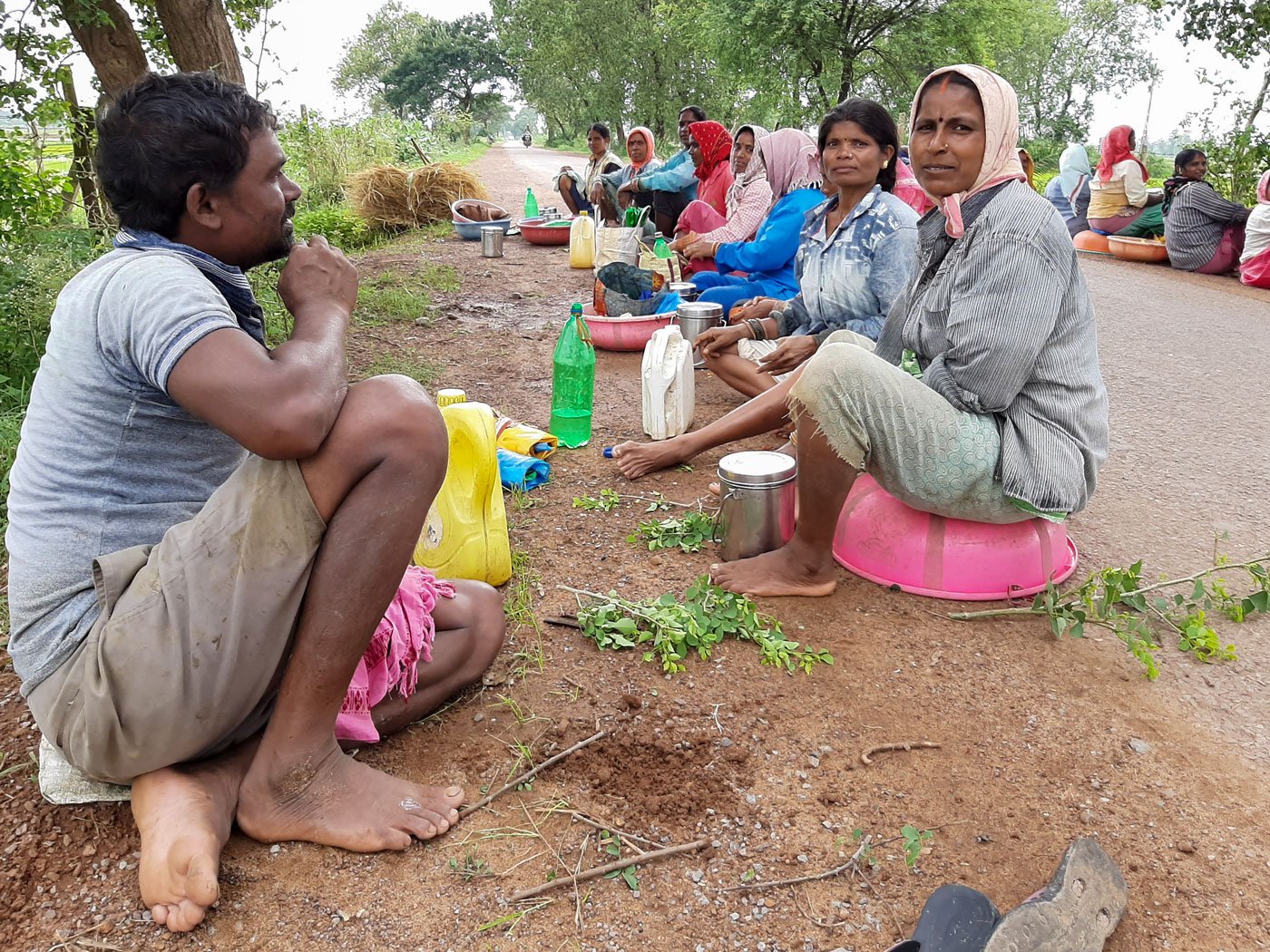 Bhukhin Sahu and the others were sitting on the road and eating a lunch of rice, dal and sabzi , which they had brought from home. They wake up at 4 a.m., compete household tasks, have a morning meal and reach the field at around 6 a.m. 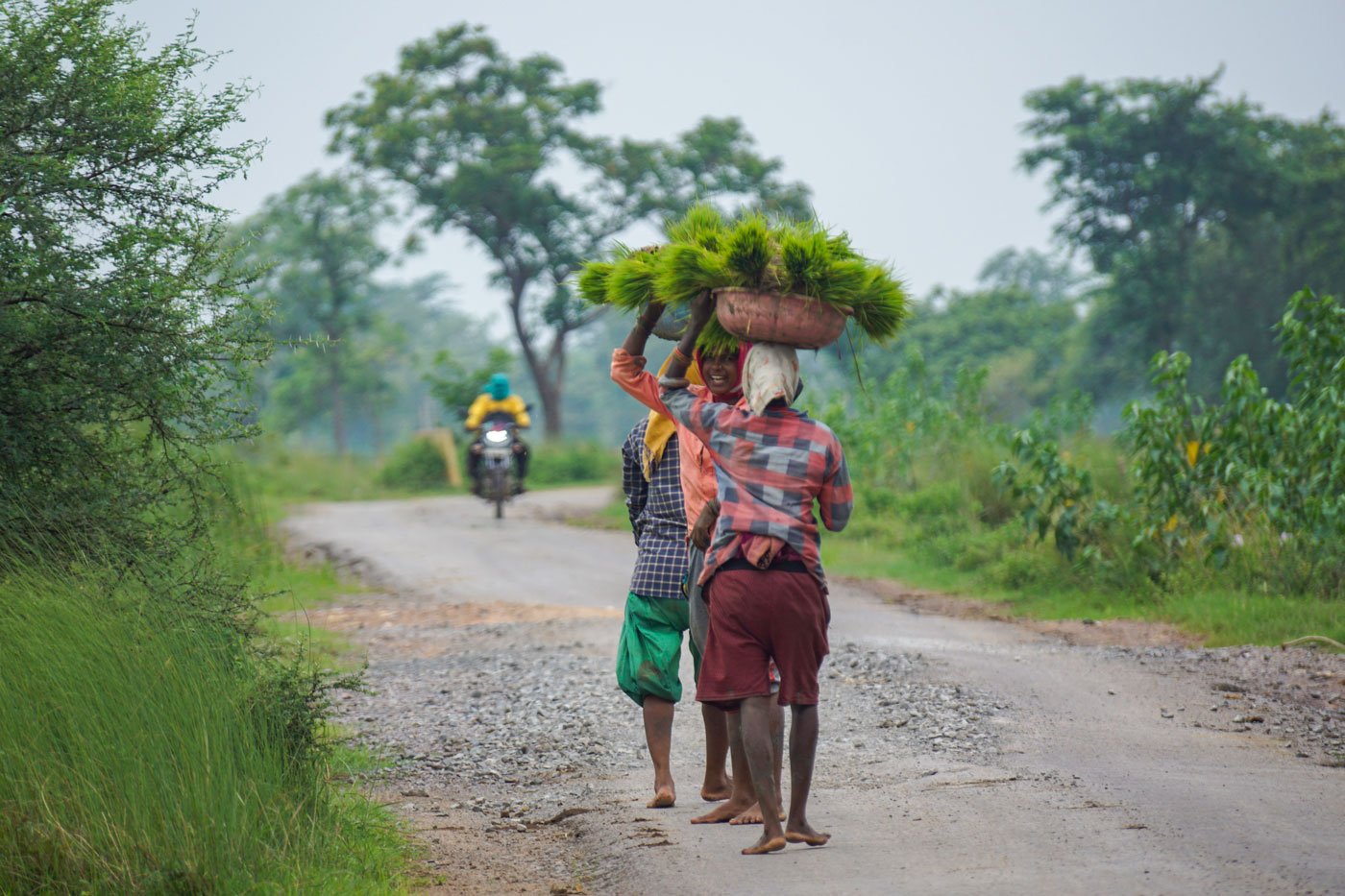 Then it's 12 hours of work – here, the farm labourers are taking saplings to the field – until they return home by 6 p.m