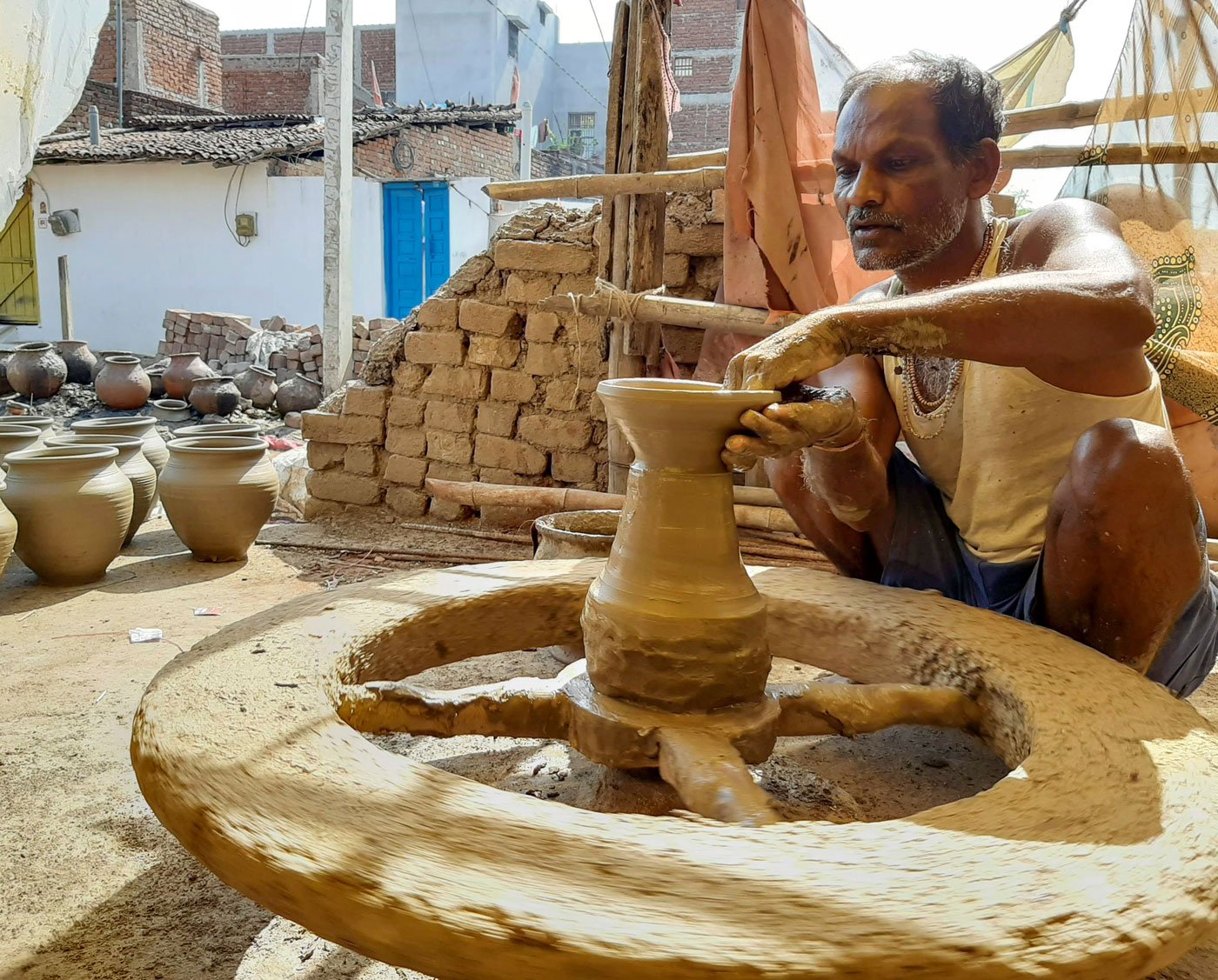 In Dhamtari town, potters missed their peak summer sales season due the lockdown, when making and selling pots became difficult. Despite markets now opening in Chhattisgarh, they are facing an uncertain year

“We are losing the summer! This is the season to sell the [most] clay pots, but we have not been able to sell much,” said Rekha Kumbhkar, while painting a pot before baking it in an oven fire outside her house. During the lockdown, she was making pots inside her house, only sometimes moving the work outside.

Red clay pots that would normally have been sold in the market from March to May were spread out everywhere outside the houses in Kumharpara, the potter’s colony in Dhamtari town of Chhattisgarh. “Like the vegetable vendors in the market are allowed to sell between 7 a.m. to 12 p.m., we should also be allowed to sell the pots, otherwise we will be in trouble,” Rekha had said.

Just then, Bhubaneswari Kumbhkar had returned to Kumharpara with an empty bamboo basket on her head. She said, “I have been to various colonies in town to sell clay pots since early morning. Sold eight and going back to the streets with another eight. But I have to return soon because the lockdown will resume at noon. Since we are not allowed to go to the market, we are unable to sell much. How can a family survive with only rice provided by the government and Rs. 500?”

The potters of Kumharpara – all the families here belong to the Kumhar OBC communityC – sell the bigger pots for Rs. 50-70 each. Each family makes between 200 to 700 pots during the peak sales months of March to May, when people buy the pots to store water and keep it cool. The number of pots made depends on how many family members help in the process. In the other seasons, the potters make small idols for festivals, diyas during Diwali, small pots for wedding rituals and a few other items.

Their work stops during the monsoon, from mid-June to the end of September, when the damp clay does not dry and work outside the house is not possible. During these months, some of the potters (none of the families own any farmland) look for agricultural labour at Rs. 150-200 a day. 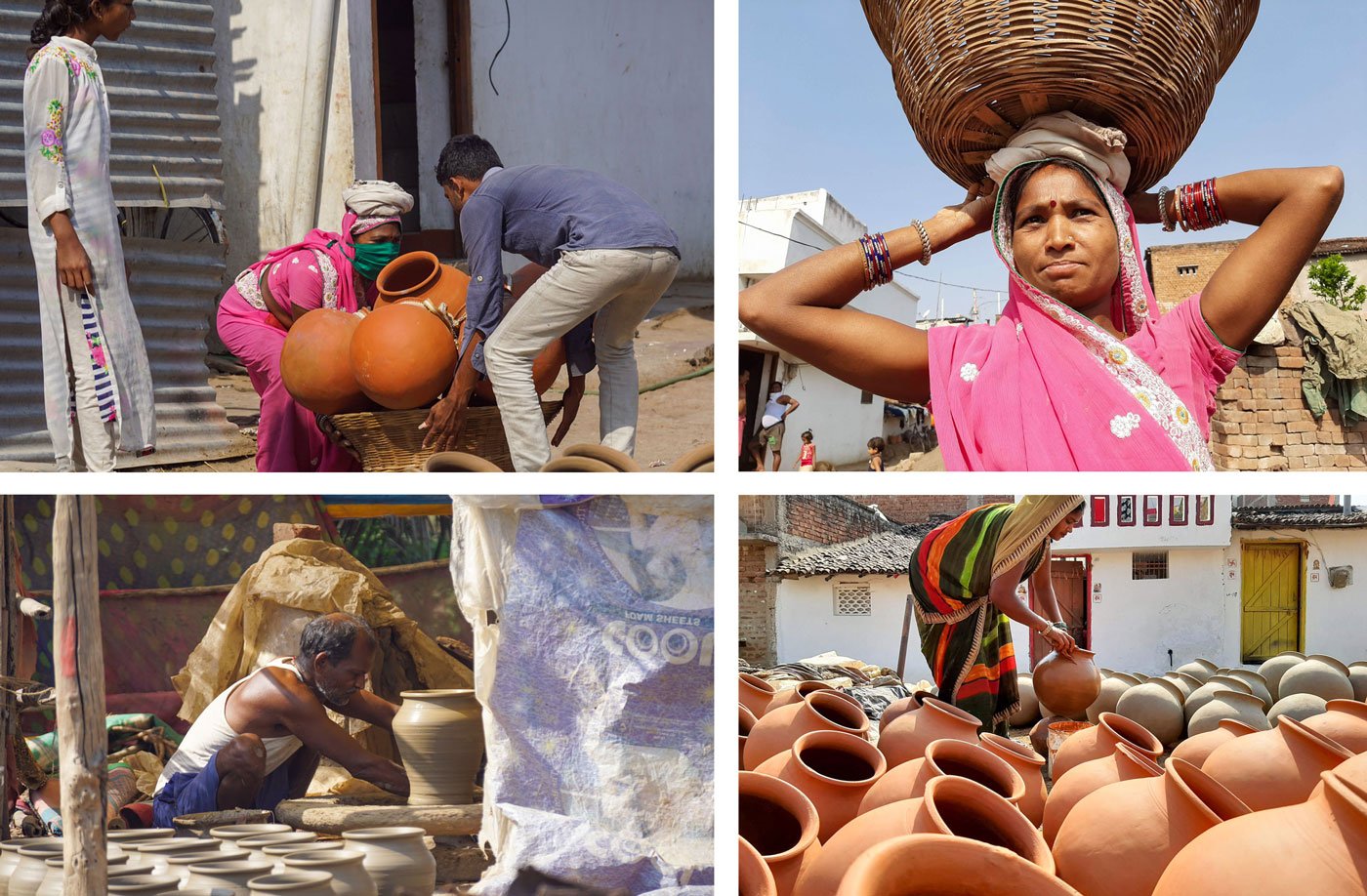 On the public distribution system (PDS) in Chhattisgarh, each person is entitled to 7 kilos of rice a month. During the early phase of the lockdown, families could pick up an extra 5 kilos, plus two months of grains in one lot – Bhubaneswari’s family received 70 kilos of rice at the end of March (for two months) and then again 35 kilos in May. The residents of Kumharpara also received Rs. 500 per family for each month from March to May. “But what can we do with Rs. 500?” Bhubaneswari asked. “So I am forced to go to the streets selling pots to take care of our household expenses.”

“I have started work late [since a day before we met],” said Suraj Kumbhkar, “because my wife Ashwani was being operated [for a hysterectomy in a private hospital in Dhamtari, which entailed a loan]. This is our family occupation and it needs more than one person to do the job.” Suraj and Ashwani have two sons and two daughters, ages ranging from around 10 to 16. “Our work stopped because of the lockdown. Due to bad weather [intermittent rainfall] since Diwali, it was already difficult to make pots,” Suraj added. “And the police come in the afternoons to stop the work outside. Our livelihood has been badly affected.”

Suraj was making large diyas when we met him. These sell for Rs. 30-40 each during Diwali. The smaller lamps sell for anything between Rs. 1 to Rs. 20 apiece, depending on size. The family also makes clay idols for Durga Puja, Ganesh Chaturthi and other festivals.

Suraj estimates that of the roughly 120 families of Kumharpara, around 90 still draw their earnings from making pots and other items, while the rest have moved on to agricultural labour, government jobs and other livelihoods. 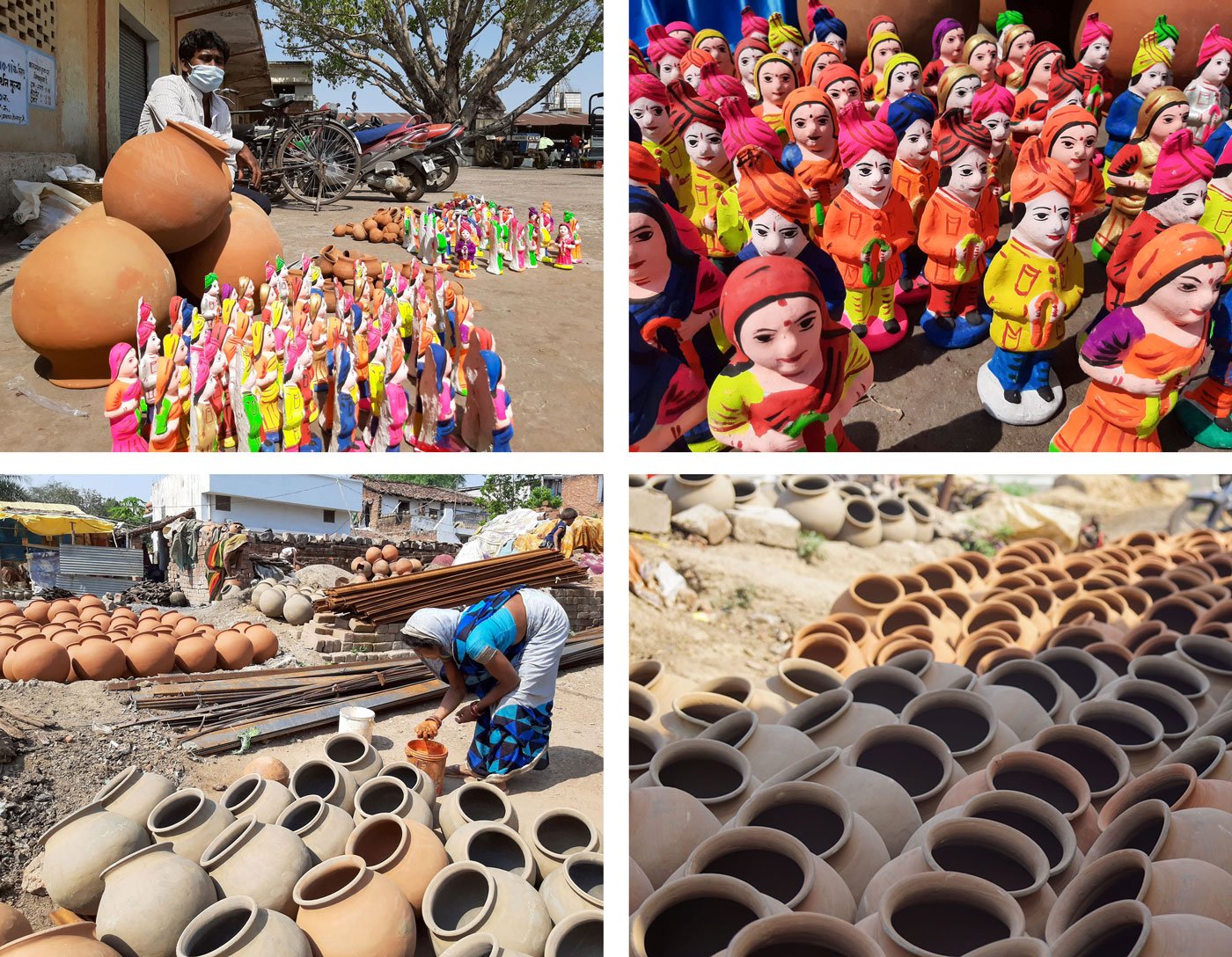 Purab Kumbhkar (top left) had sold only very few bride-groom idols this Akshaya Tritiya. Many potters in Kumharpara sold hardly any pots this summer due to the lockdown

At the end of April, we had also visited the old mandi where a vegetable market was being temporarily organised by the Dhamtari district administration from 7 a.m. to 1 p.m. We felt happy to see a few potters selling clay toys (mostly bride and groom pairs) along with a few pots. In the early weeks of the lockdown, potters were not allowed here – only essential items like vegetables were permitted to be sold.

It was around the time of Akshaya Tritiya, regarded as an auspicious day in the Hindu calendar, when in many parts of India farmers begin cultivation, and when many in Chhattisgarh celebrate a traditional wedding ceremony of the bride-groom idols ( putra and putri ). “I have 400 pairs, but till now have sold only 50,” said Purab Kumbhkar, who sells each pair for Rs. 40 or Rs. 50. “Last year, by this time, I had sold items worth Rs. 15,000, but this year it’s been just Rs. 2,000 so far. Let us see, there are two more days… [of the festival period]. We are bearing a huge loss Sir, because of the lockdown.”

The children in most of the families in Kumharpara are in schools and colleges – this means expenses such as fees, books, uniforms. The summer season is an important time for the potters to earn some extra money and save it for the rest of the year.

“But the pots are not even selling because of the rains every few days,” Purab added. “People need pots in the summer when the weather is hot. Both the weather and the lockdown have made our life difficult.”

By the middle of May, with lockdown restrictions slowly easing in Chhattisgarh, the potters could go to the market to sell, as well as to the larger Sunday market (Itwari bazaar) in Dhamtari. The regular markets are now open from 7 a.m. to 7 p.m. But by the middle of May, the potters’ peak sales season was nearly over, as was the summer – and the losses will reverberate among the Kumhar families for the rest of the year.