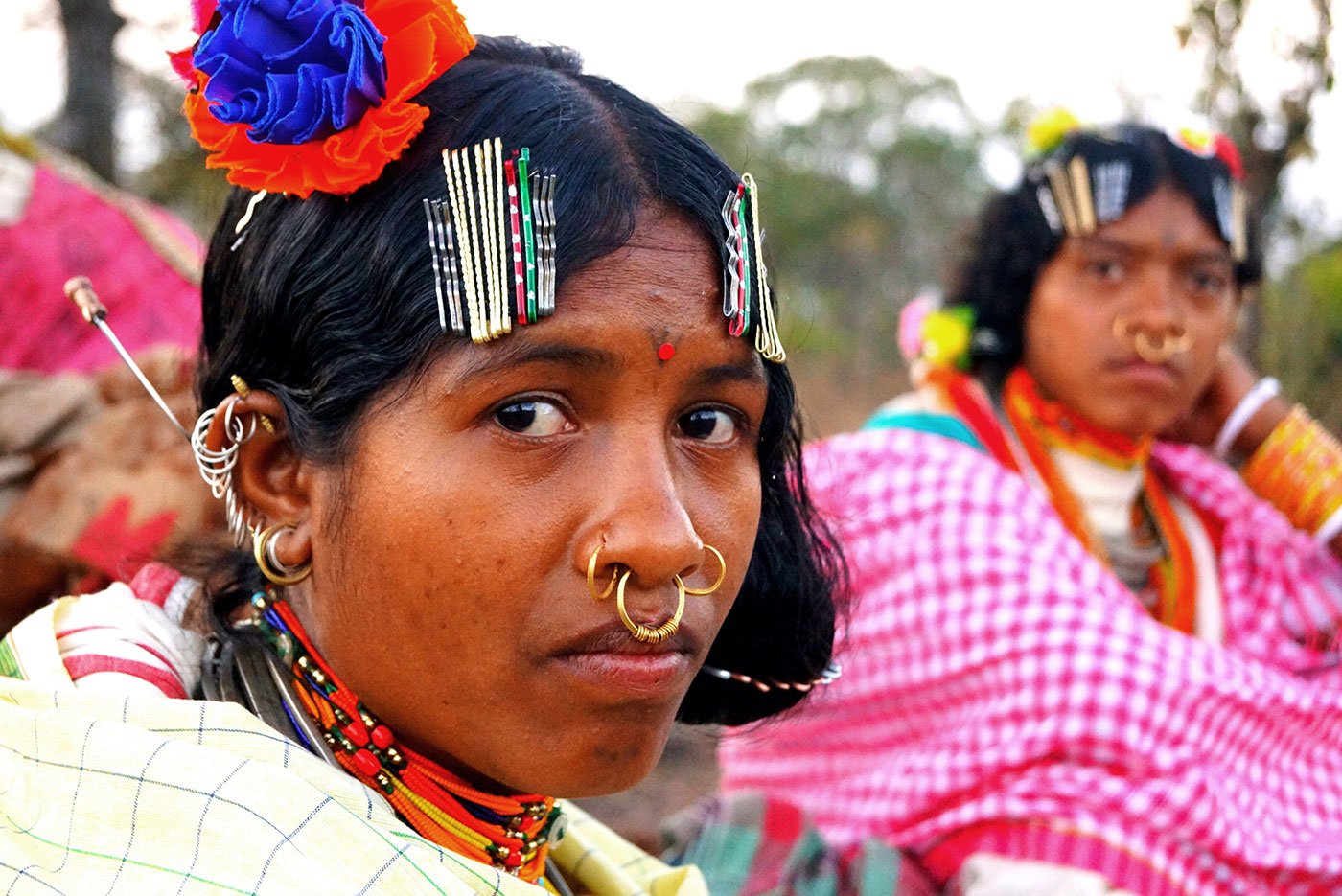 Gathering at the campfires of Niyamgiri

At the Niyamgiri plateau in Odisha, the Dongria Kondhs gather for a colourful festival every year. But with ever-present threats of mining, this celebration also speaks of a growing need to protect their homeland

Goats, sheep, chicken, buffalo, roots, leaves, fruits – all are available in abundance at the annual Niyamgiri festival. And the Adivasis of Rayagada and Kalahandi districts of southwestern Odisha are here in large numbers too.

Every year, from February 22 to 25, soon after the harvest has been brought in, the Dongria Kondh tribe prepares to worship Niyam Raja. Their King of Law is represented by the forested Niyamgiri hills. This is the time of the annual Niyamgiri festival, which dates back to a time when “there was no government in this part of our world… [only] the Dongrias were here,” says Lodo Sikoka. “It was a time, he says, when his people were “happy, enjoying life with liberty and dignity, speaking in our language. There were dense forests with lots of streams, and it was full of wildlife.” Sikoka is a Dongria Kondh, and a leader of the Niyamgiri Suraksha Samiti, an organisation formed in 2003 to protect the Adivasis and the hills from bauxite mining in the region. (See ‘ The mountain, forest and streams are our gods’ )

“The tribes don’t worship any other god except nature and the environment,” says Lingraj Azad, a Kesinga-based activist from Kalahandi district, and convener of the Samiti. “In the Kui language, they speak of the ‘Dharni Penu’, the Earth Goddess, and they regard ‘Horu’, the mountain, as the Father God. The water, forests, trees and air are also regarded as the base of life, and they too are worshiped. That is why we protested against the mining of the Niyamgiri hills when [the government] proposed to hand over the land to Vedanta.”

For long, the Dongria tribes have opposed a project by the government-owned Odisha Mining Corporation and Sterlite Industries (now Vedanta), a British multinational. The project proposed to mine their sacred hills for bauxite (which is used in making aluminium) for Vedanta’s refinery in the state's Lanjigarh tehsil .  Even though 12 gram sabhas of the Dongria Kondh and other tribal groups voted against any mining operations in a public referendum ordered by the Supreme Court in 2013, the Odisha government has continued to petition the court to allow mining in these ecologically-sensitive hills.

'They launched the movement against Vedanta to not only save the forests and Niyamgiri, but also to protect their way of life, their language, attire, culture and livelihoods'

Watch video: Dancing and singing at the Niyamgiri festival

“They launched the movement against Vedanta to not only save the forests and Niyamgiri itself, but also to protect their way of life, their language, attire, culture and livelihoods,” Azad explains.  The Adivasis, he says, collectively recognise that the crucial elements for life and the continued survival of both humans and animals are air, water, fire, land, forest and sky. “They not only think about these, but also practice [this philosophy] in their day-to-day life,” he says.

Over time, the Dongrias’ interaction with non-tribal cultures has brought a wider audience to their nature-based philosophy. And their historic anti-mining struggle has made the Niyam Raja festival an event circled on the yearly calendars of many activists and reporters.

Celebrated each year on the plateau of the Niyamgiri range, the festival is now  an informal platform for ‘ jal, jangal, zameen ’ (water, forest, land) movements, drawing participants from several states and cities like Delhi, Kolkata, Bhubaneswar and Bargarh. “The festival we are celebrating is a festival of unity. The unity of the movements in Odisha and India as a whole” says Saty Mahar, a young activist from Bhawanipatna city in Kalahandi district, who was at Niyamgiri in February.

But the bulk of the participants still come from the seven village-cluster panchayats of Munikhal, Dahikhal, Hatamuniguda, Kurli, Sanakhemundi, Parsali and Trilochanpur. There are around 100 Dongria villages in the Niyamgiri hills and another 180 villages in the foothills, with 10 to 30 families living in each.

The festival is financed by contributions of Rs. 30 per household; each family also brings grains and rice. These are given to a tribal committee, which sets up an open-air community kitchen to serve meals of rice, dal, and vegetables to everyone at the festival. Animals or chicken offered to Niyam Raja are also cooked and served at meal-time.

For the Dongria Kondh,  a Particularly Vulnerable Tribal Group, the festival continues to reaffirm their traditions. “We are overjoyed when celebrating this festival, so are our gods and goddesses,” says Lodo. “The mountain god is happy, the river god, the land god and the forest god is happy too – each and every one is happy in this festival.” 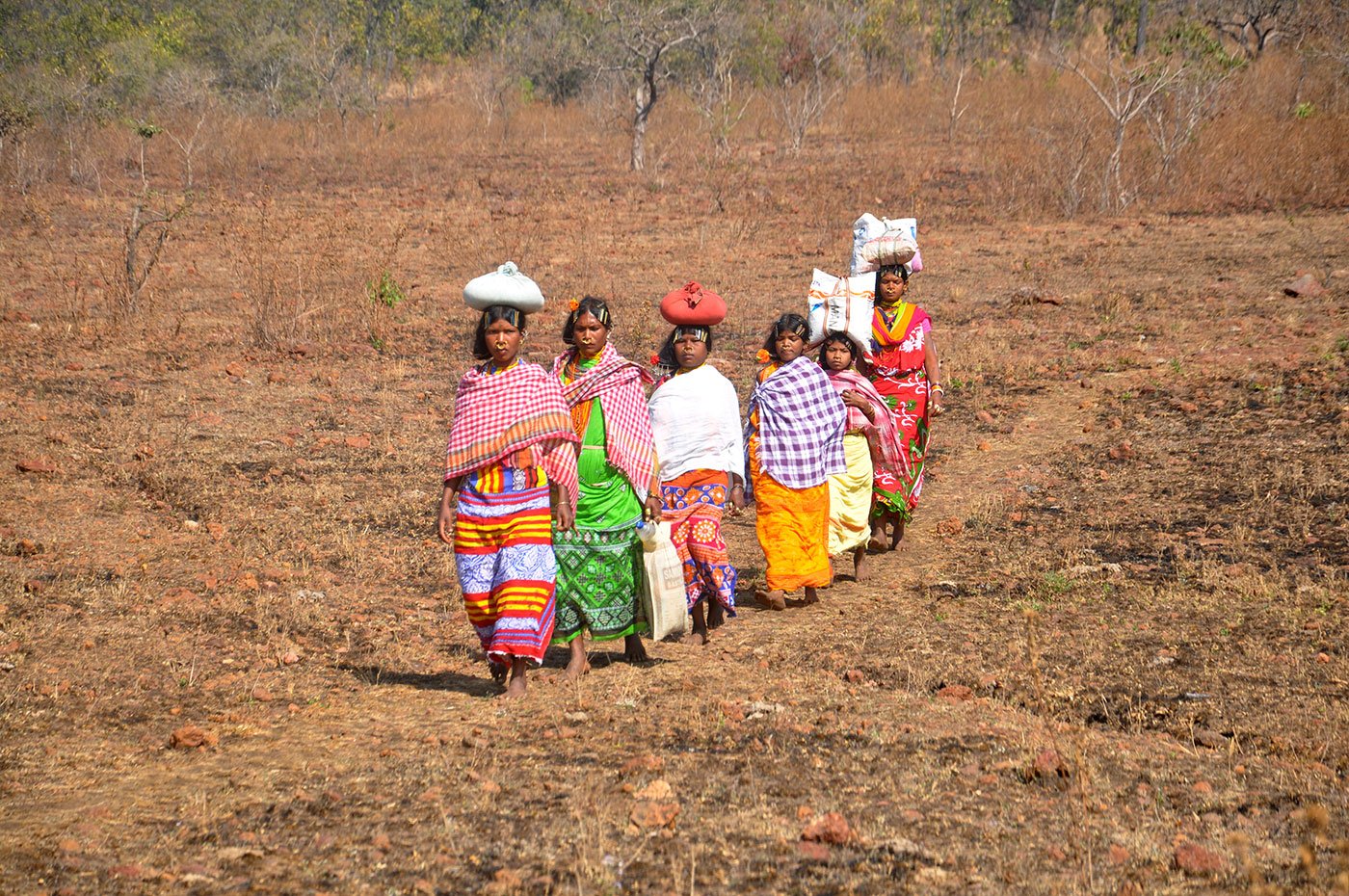 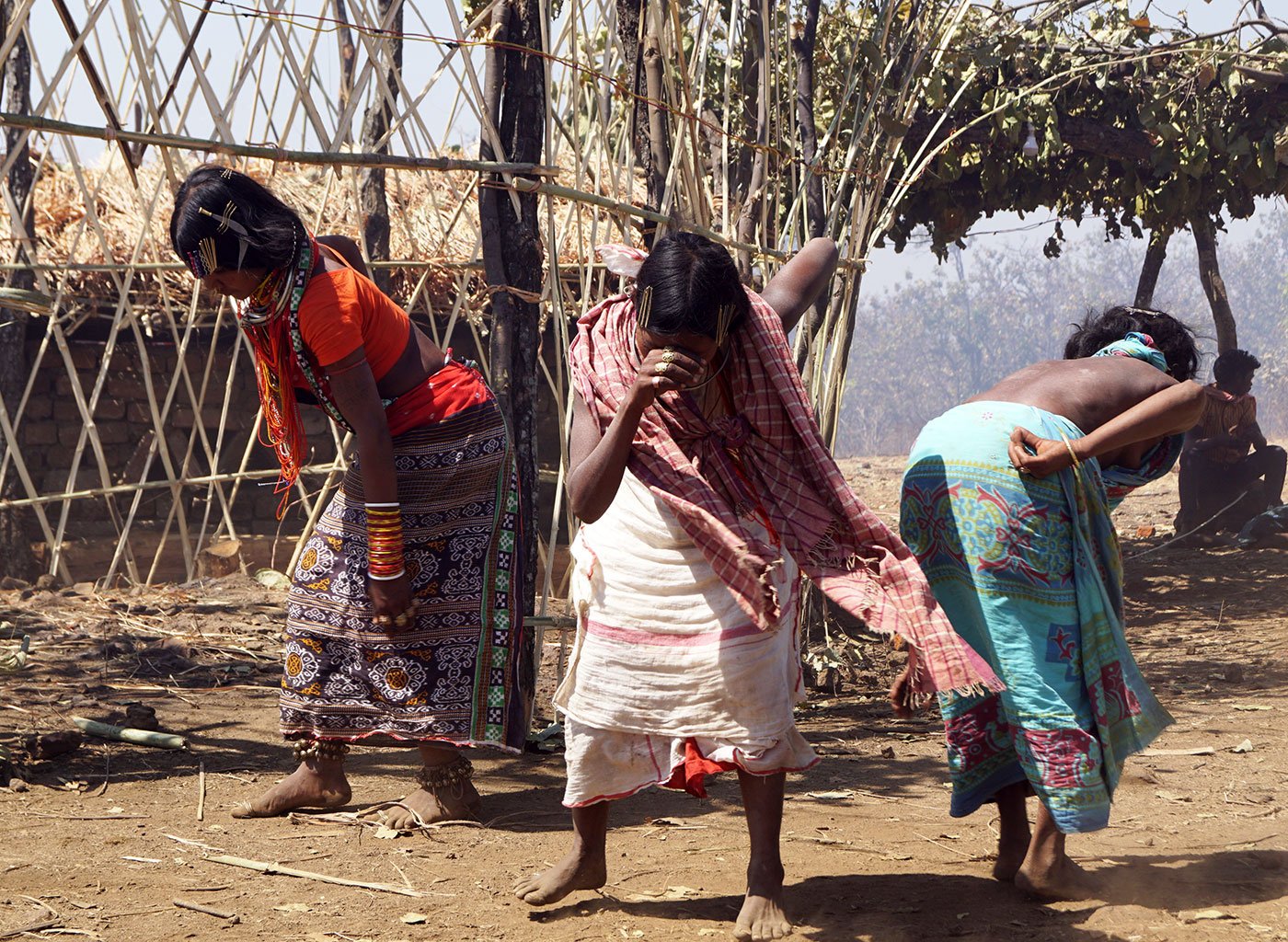 The Bejuni are the female priests of the Dongria tribe. After conducting rituals, they dance before the deity who represents Niyam Raja 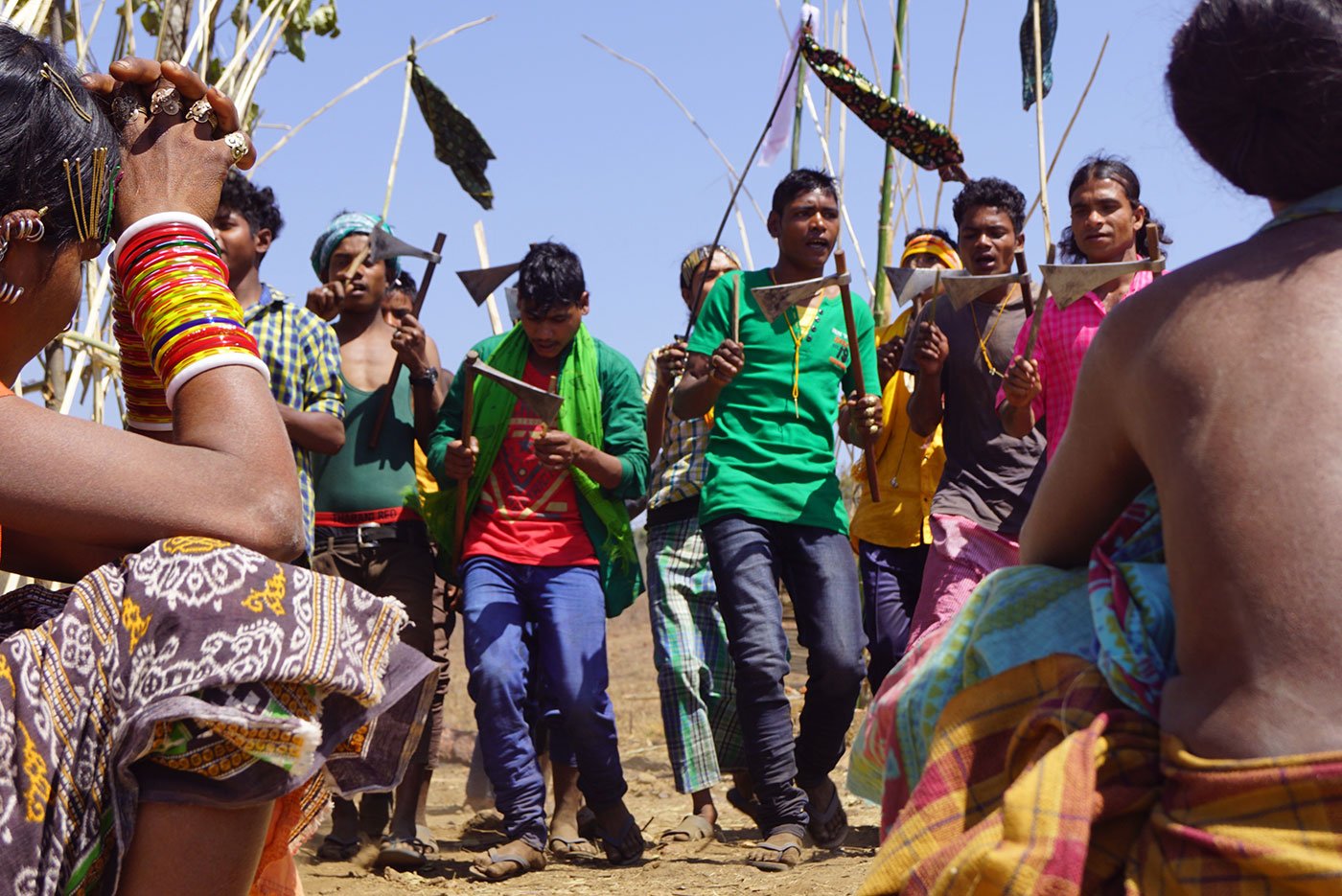 The Dongria Kondh revere the axe; it is used as a work tool, and also as a musical instrument 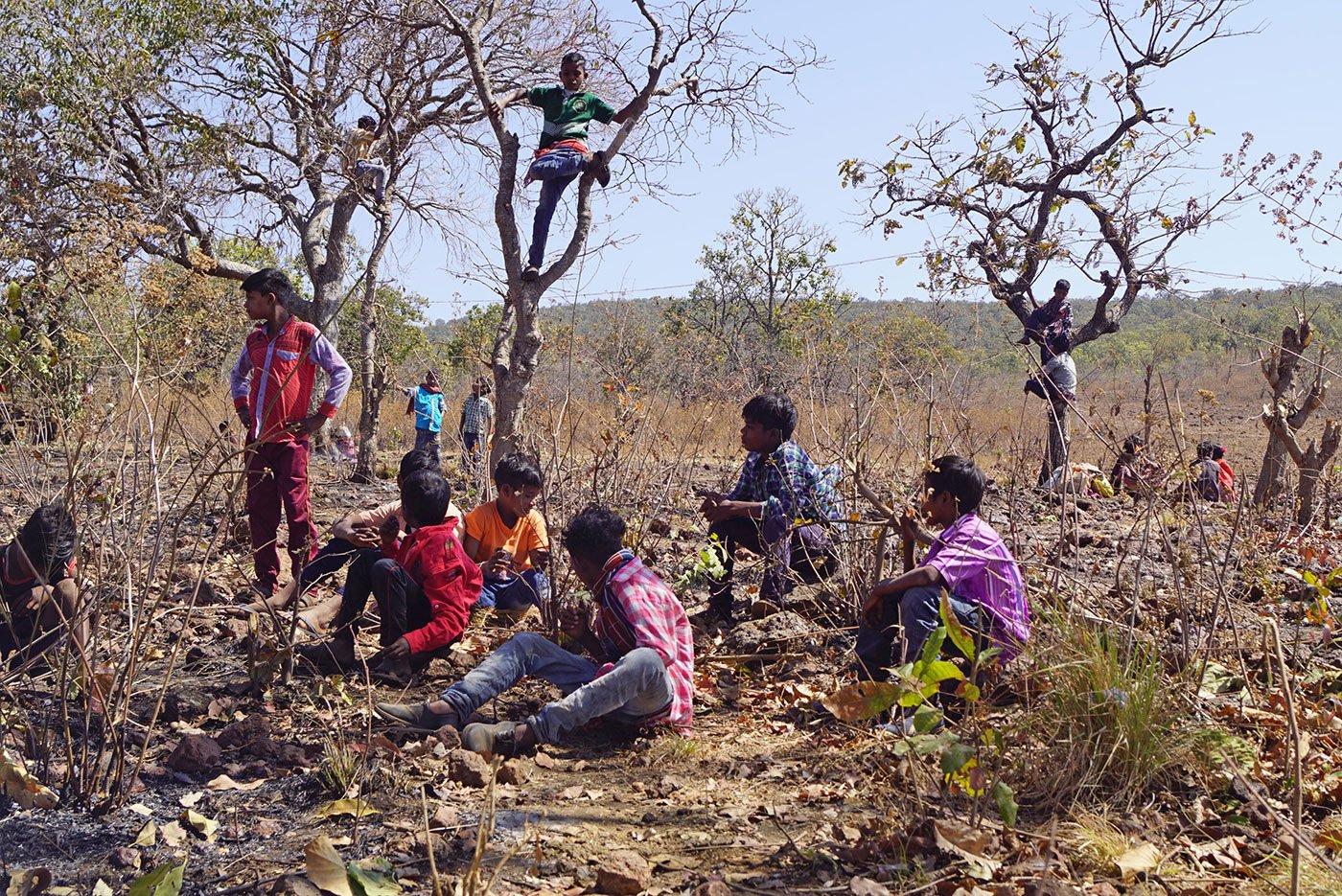 Young Adivasi boys have found their own spot at the festival, to sit around and climb a few trees 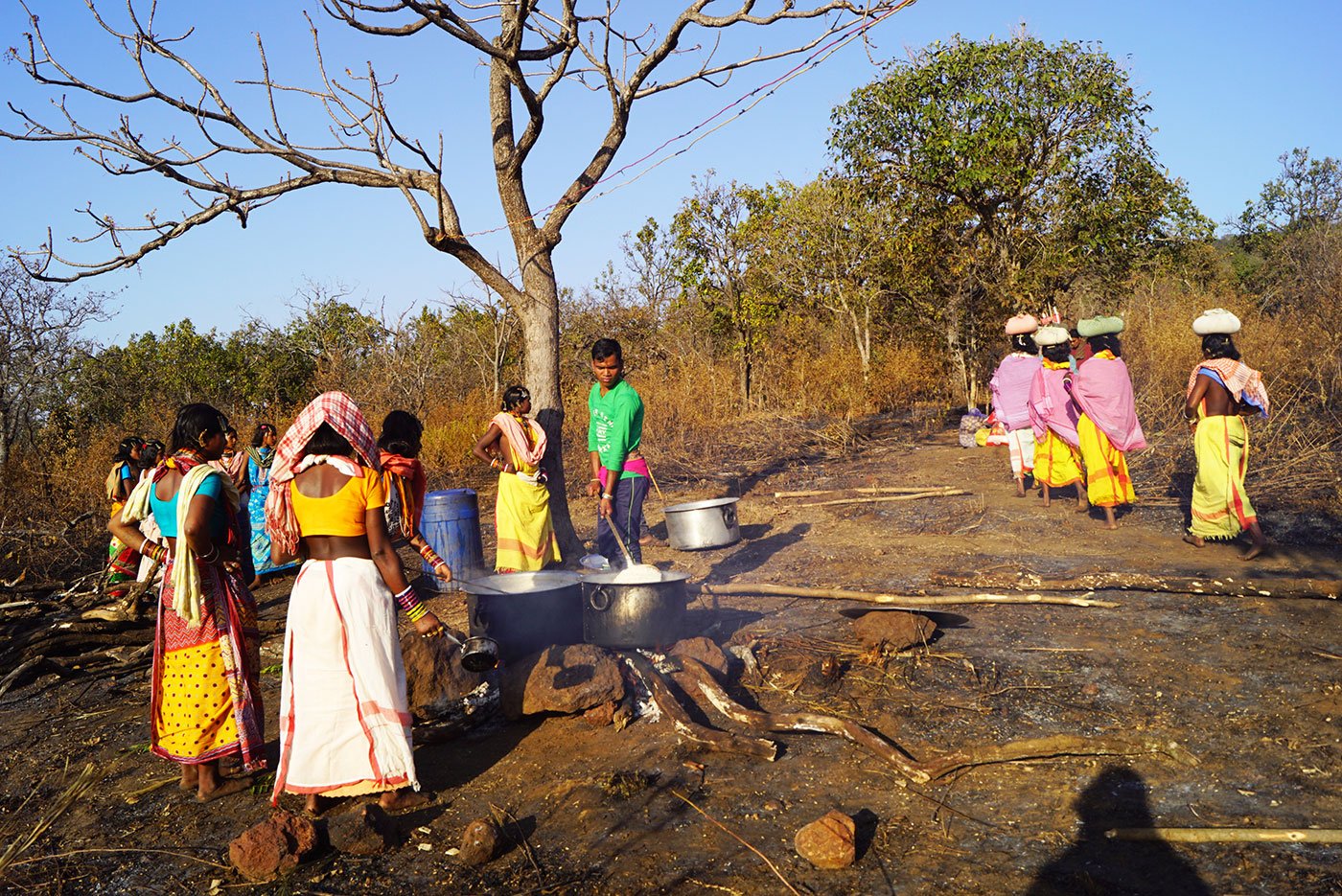 The Adivasis prepare simple meals of dal, vegetables, rice and meat  in the open-air, community kitchen for people attending the festival 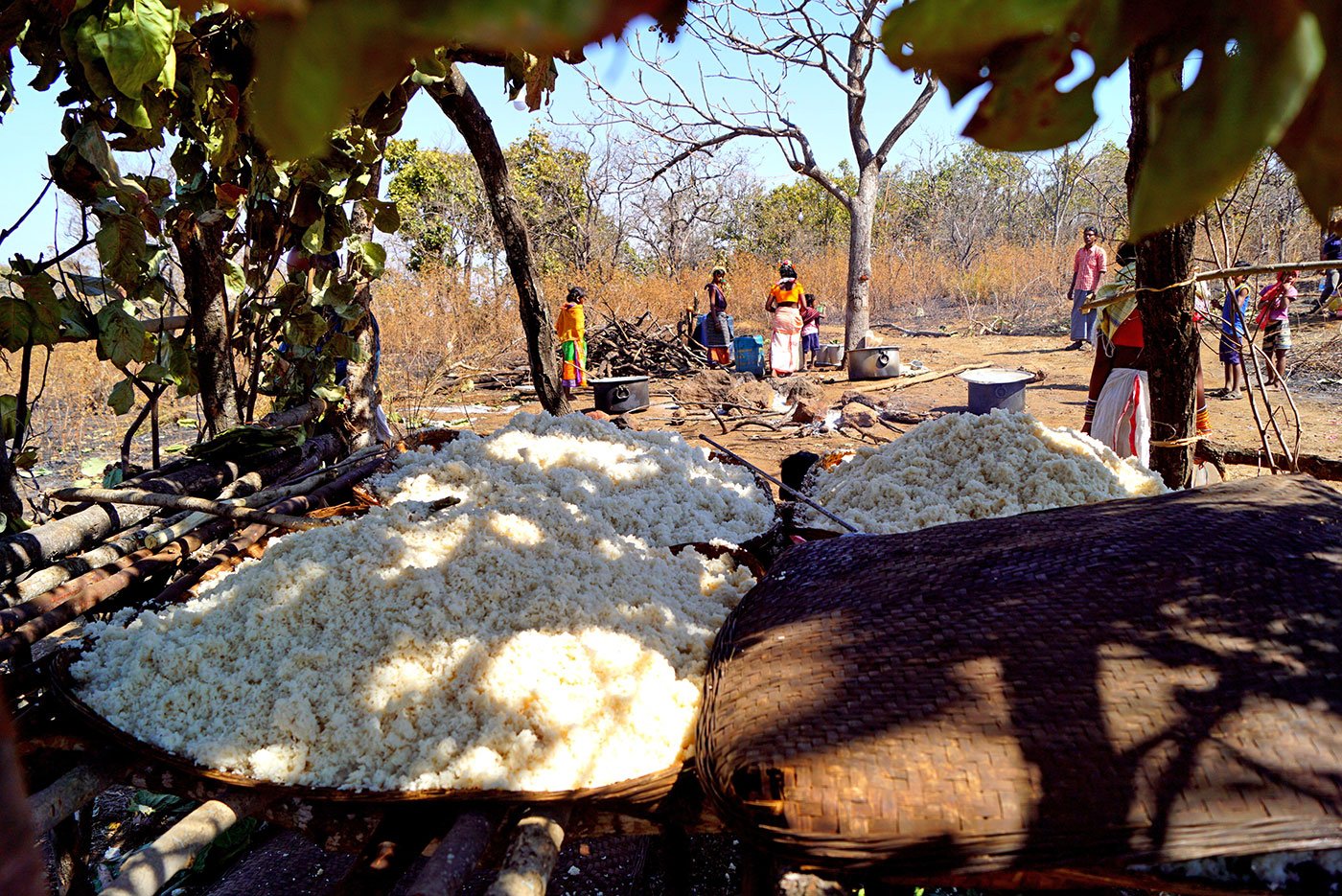 Cooked rice is kept on a platform made of wood, until it's meal-time 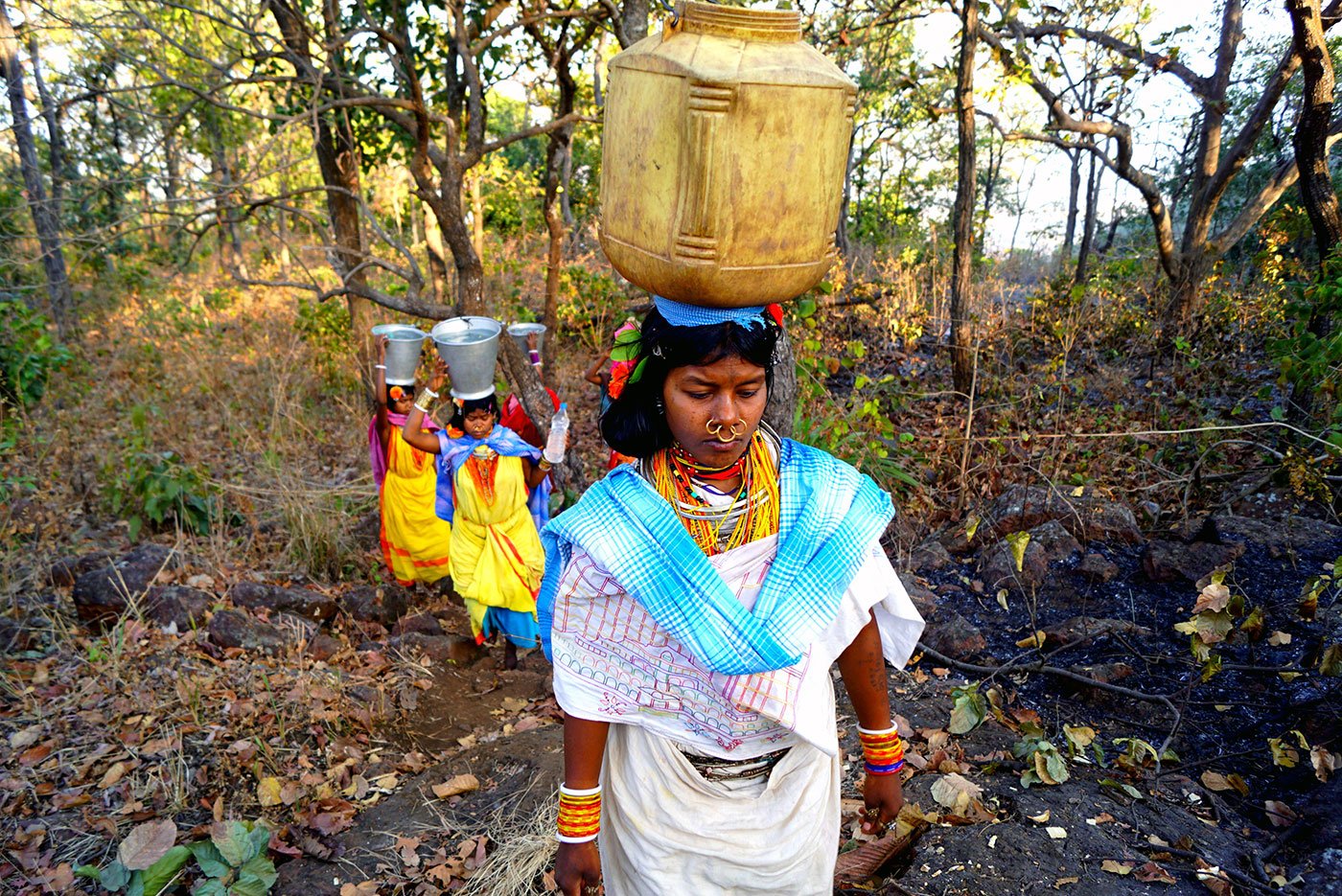 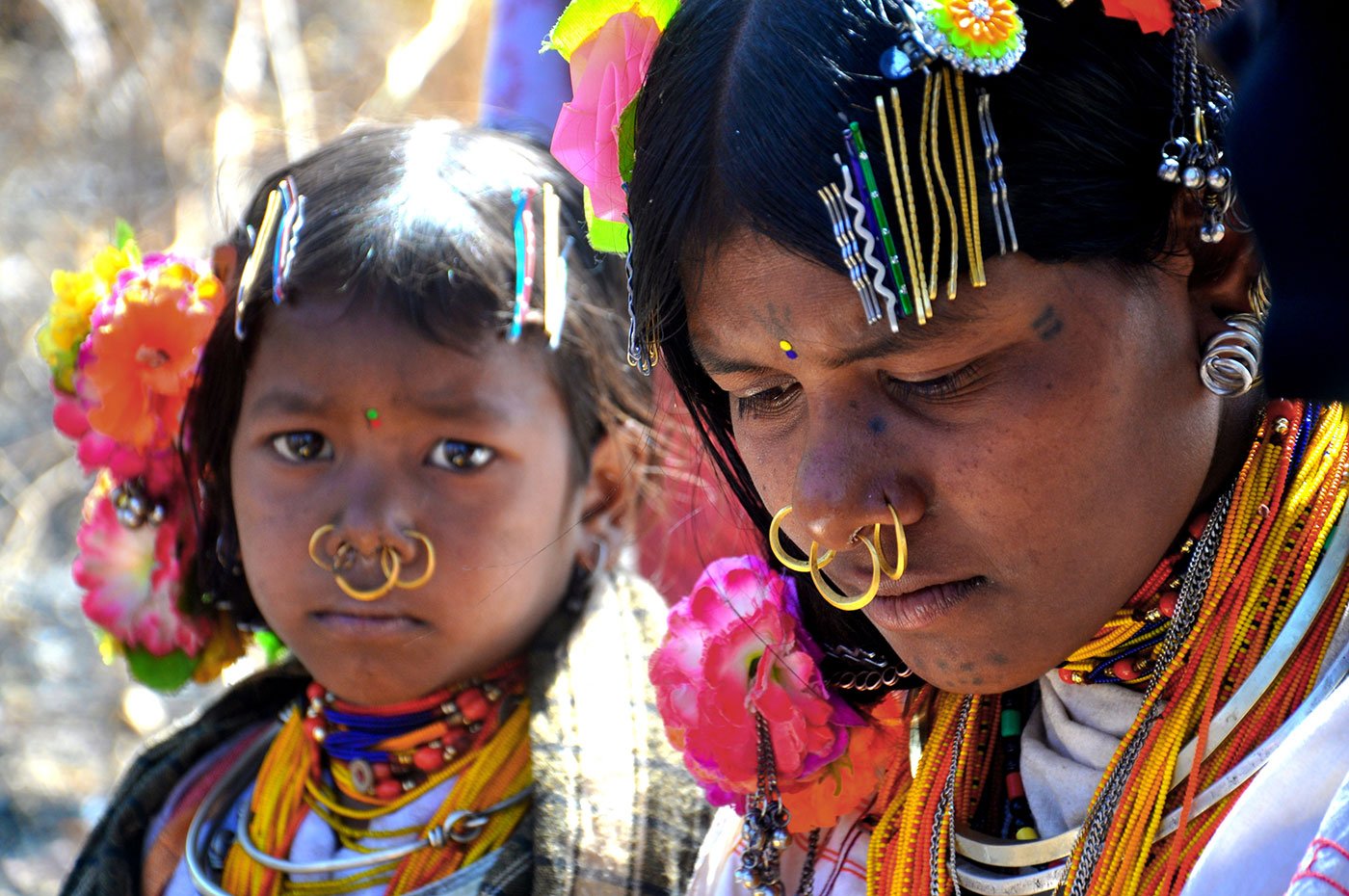 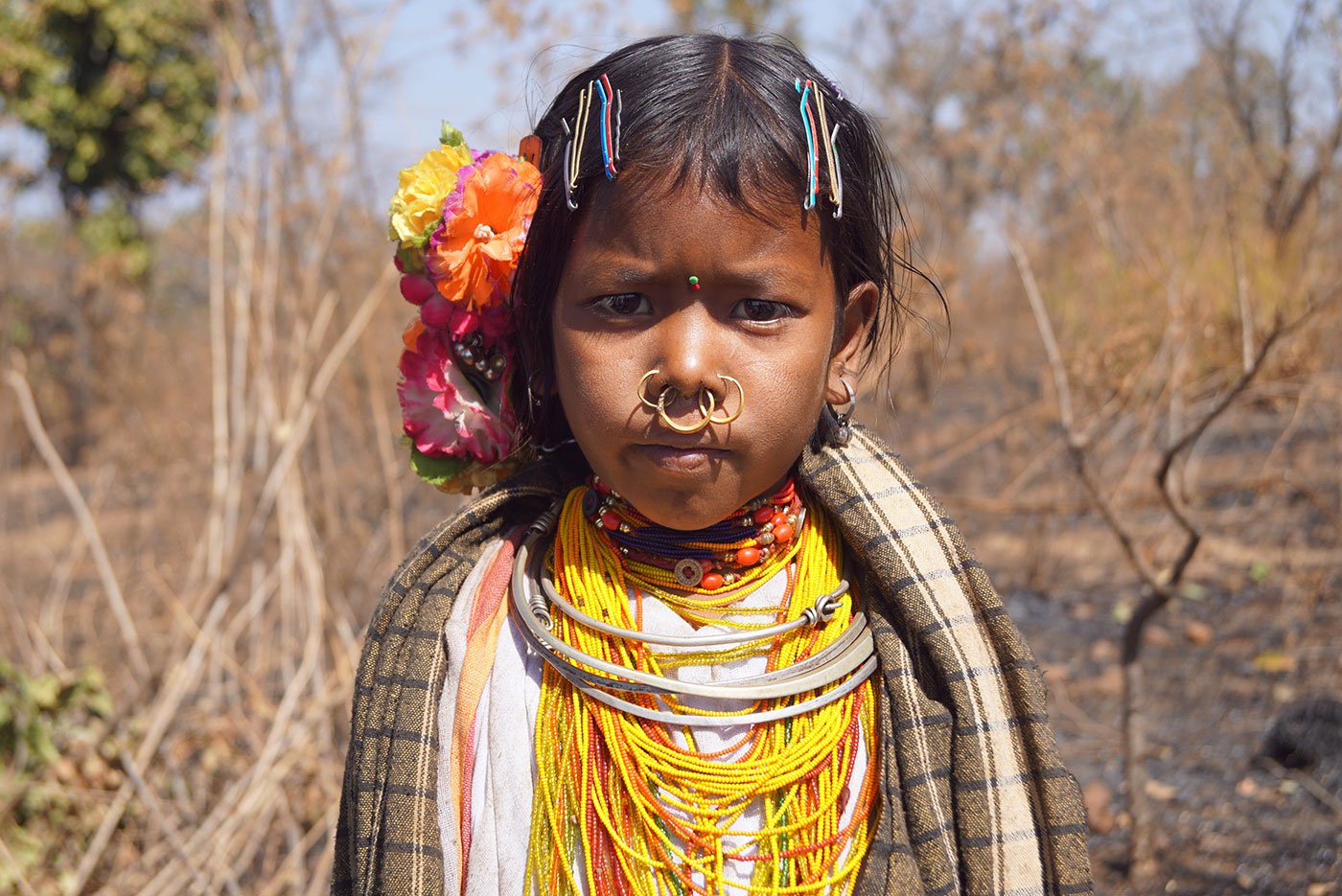 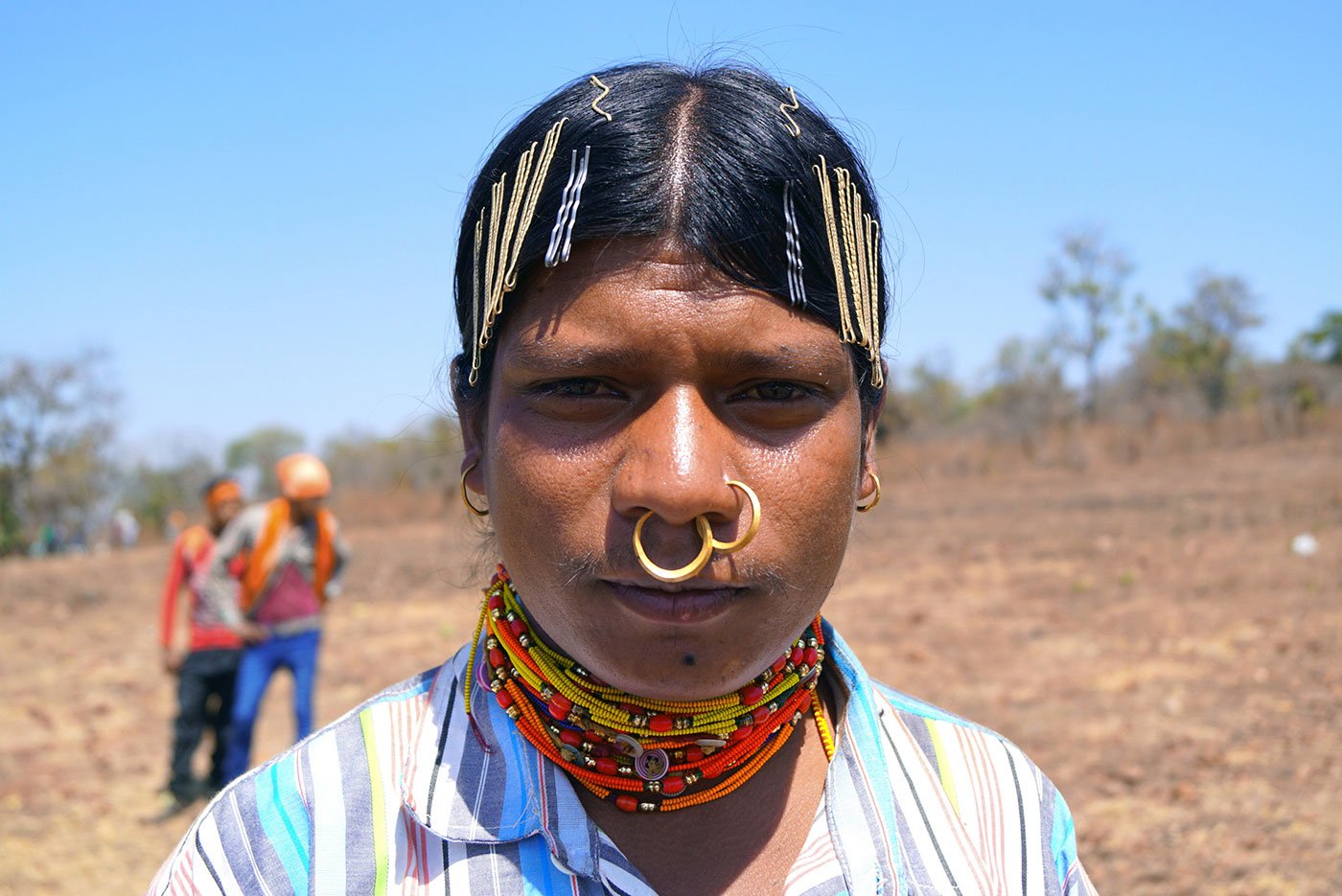 The Dongrias’ worldview is gender-equal. Boys and men decorate their bodies for the festival; the clothing and ornaments for men and women are similar 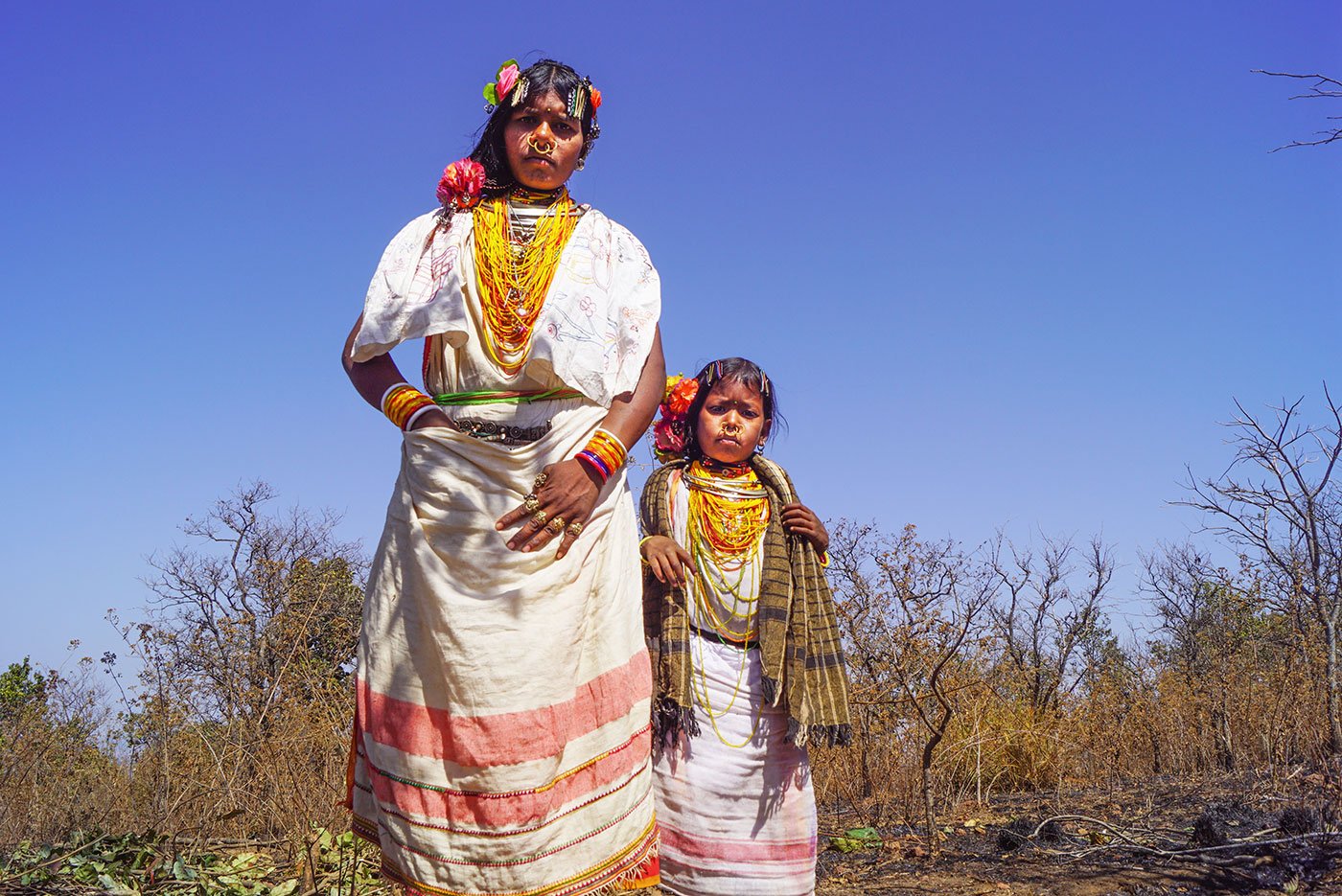 Two generations of a family, identically and intricately dressed up, are ready for the celebrations 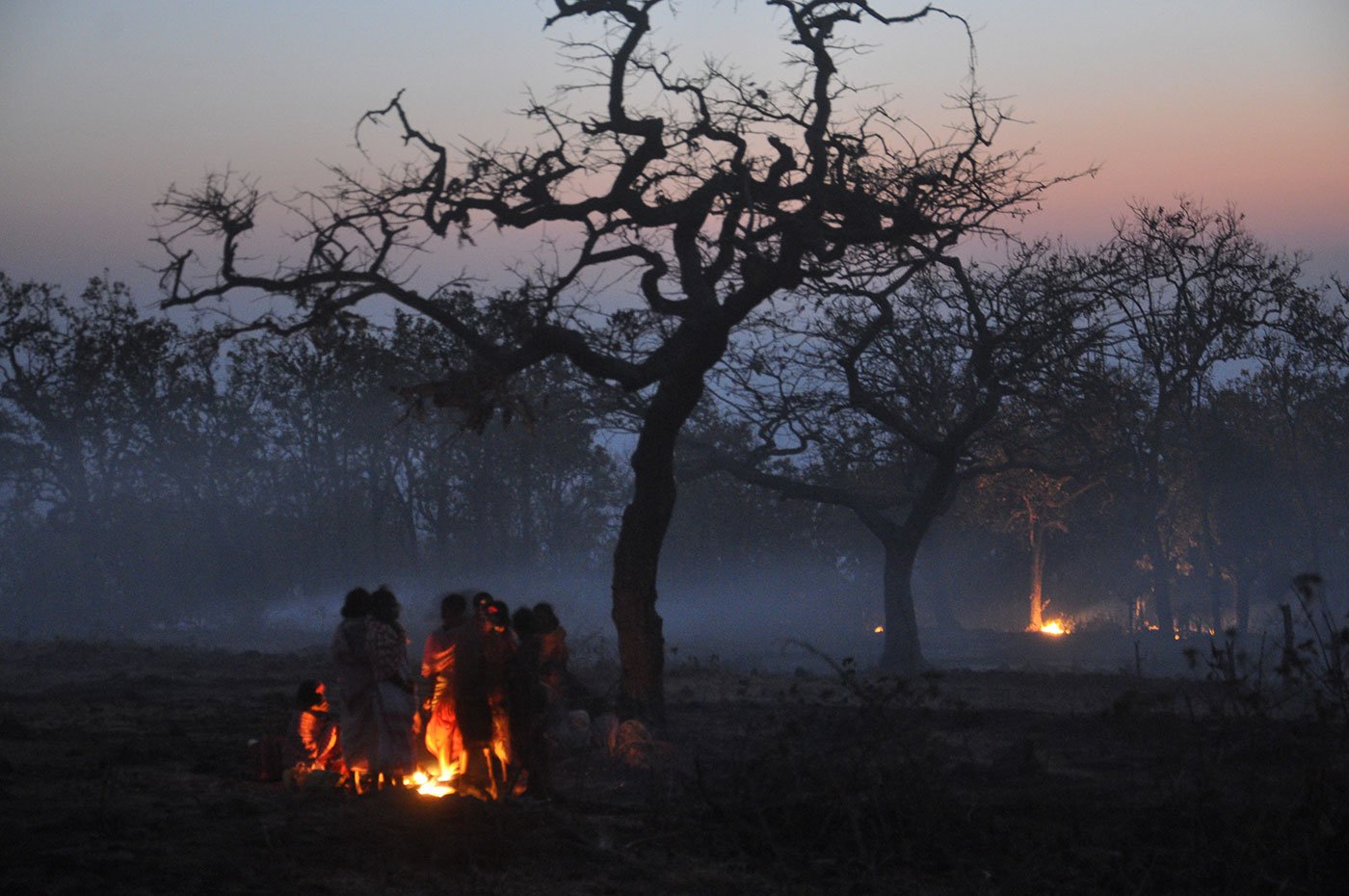 The festival is celebrated in the plateau of the Niyamgiri hill near Anlabhata village; since this is away from any village or houses, the Adivasis sleep in the open. In the evenings, fires are lit for warmth and conversation 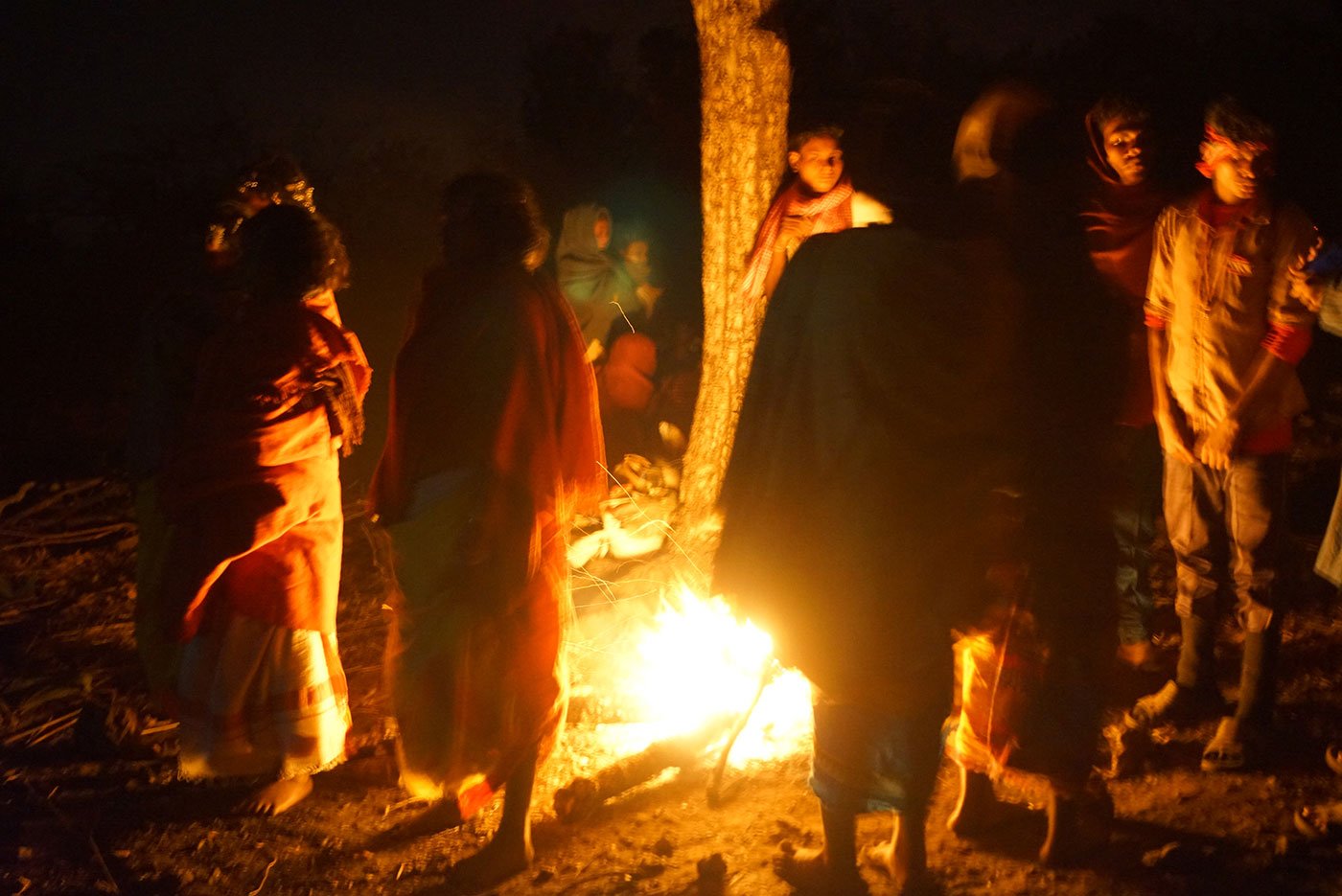 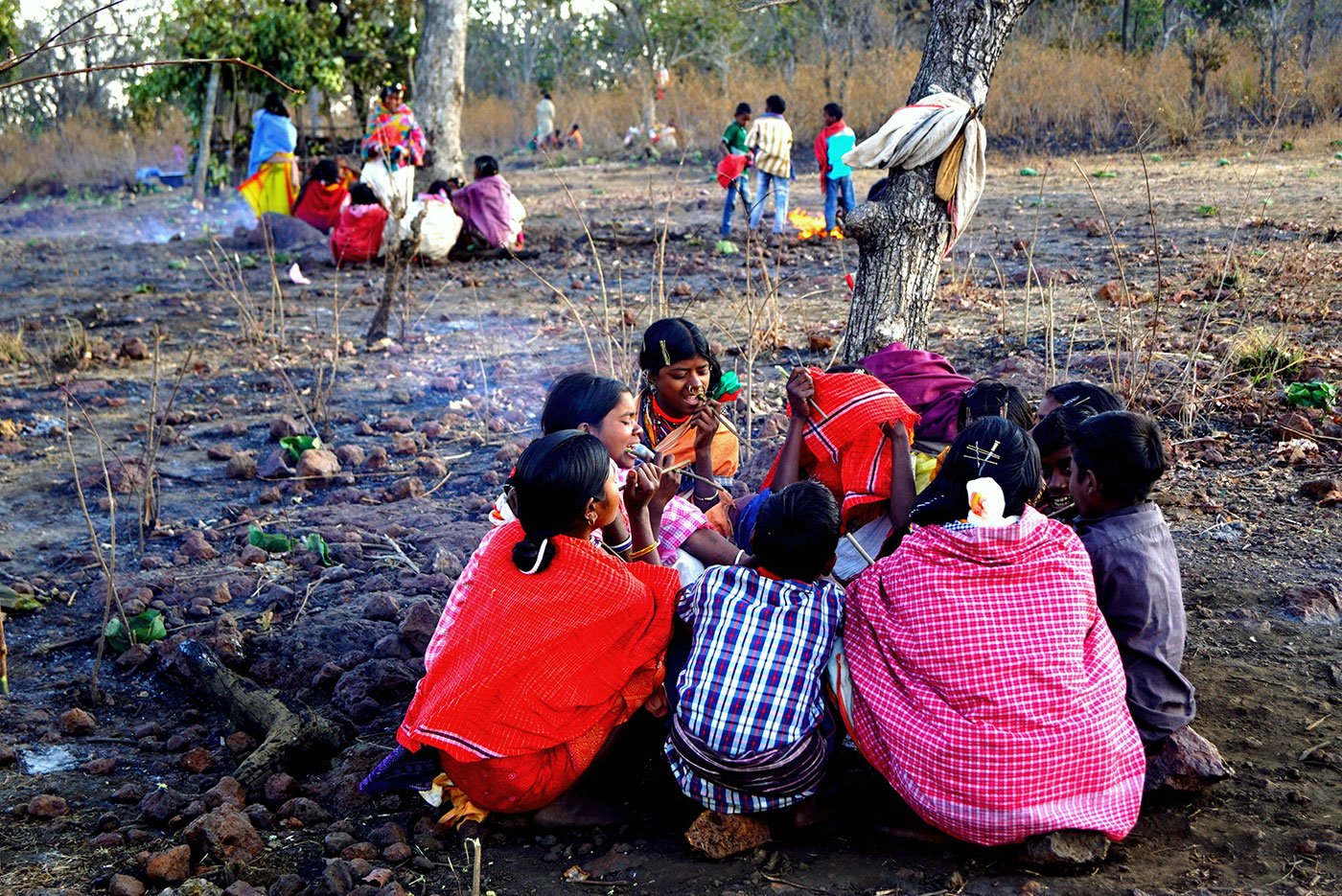 Early in the morning, the scattered groups that spent the night on the Niyamgiri plateau sit near the remains of their still-smouldering campfires