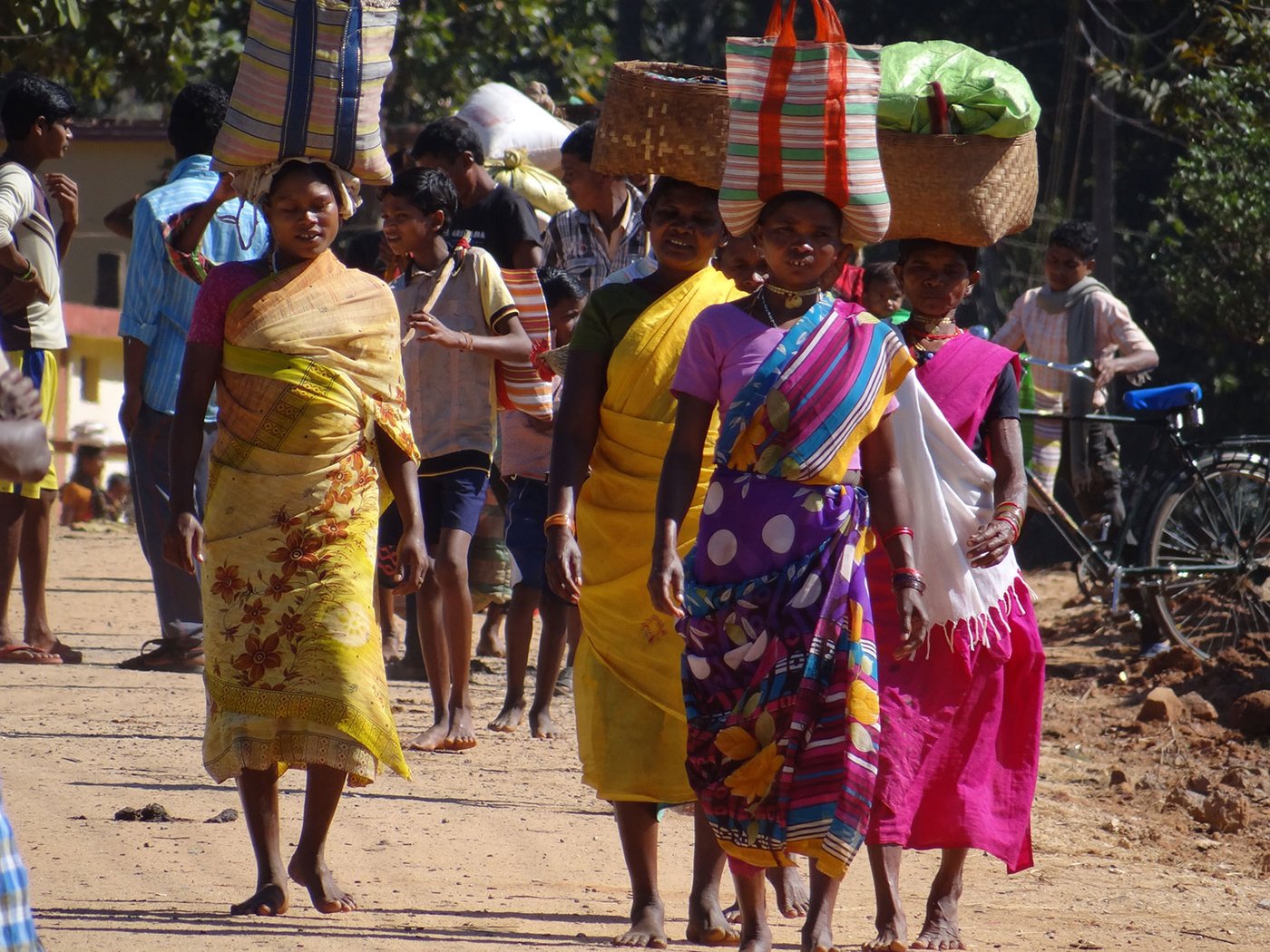 A day at Orchha haat 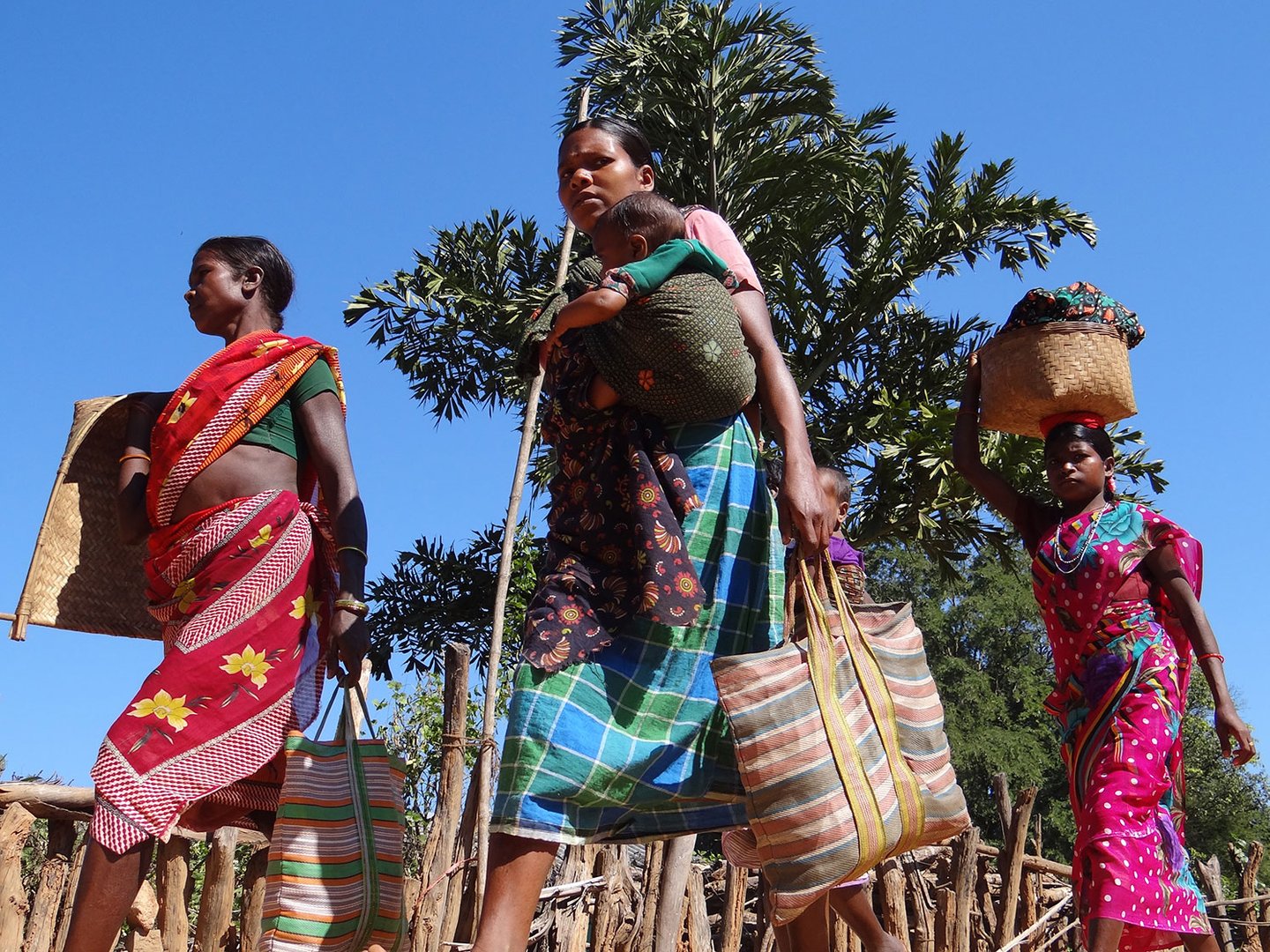 Abhuj Maria women arriving at the weekly market in Orchha

The trek back home is arduous. The women will halt for the night at Bhatbeda, begin walking again in the morning, and reach the hilltop hamlet of Rajnairi by dusk. It will have taken them two full days to return to their village from the haat (weekly market), just as it took two days of walking across undulating terrain to reach the weekly market at Orchha. 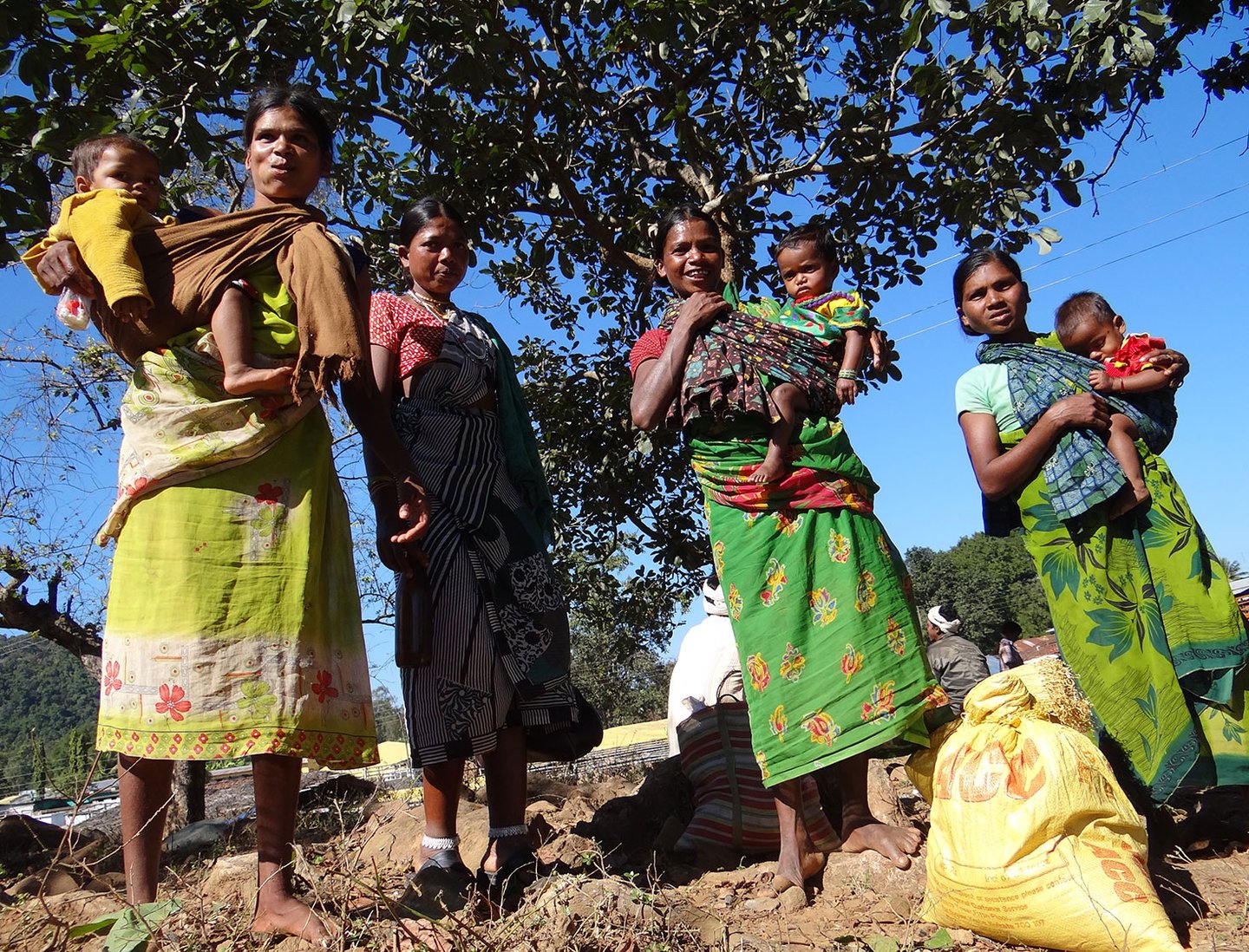 In the process, the women of the Abhuj Maria tribal community will cover over 40 kilometres on foot across dust paths in the heavily forested Narayanpur district of Chhattisgarh in central India. Their home, Abhujmadh, covers more than 4,000 square kilometres in a region that is prone to violent clashes between Maoist guerrillas and Indian security forces. The conflict has made people easily suspicious and scared, so we have left out identifying details. 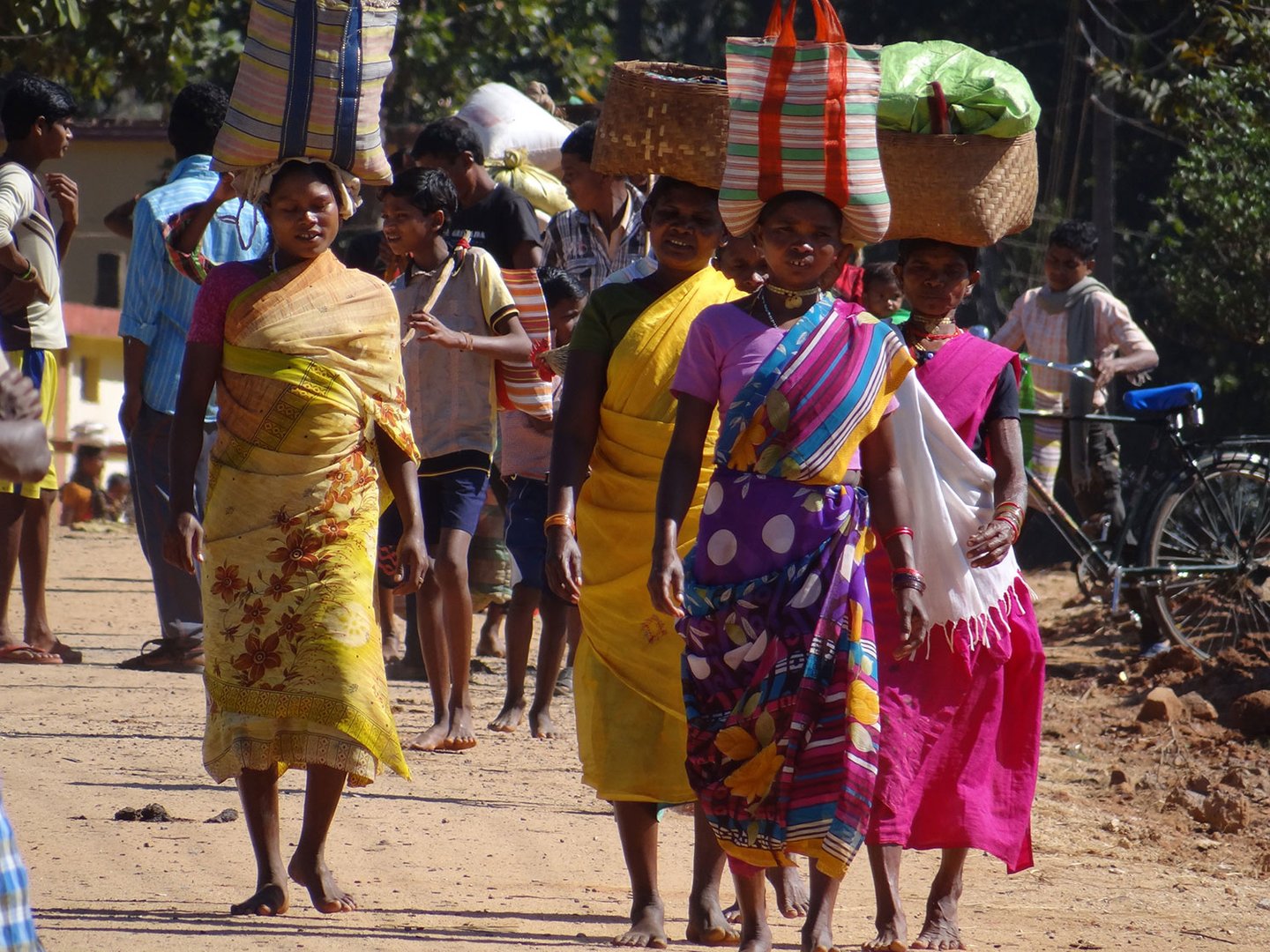 Earlier, in the bustling weekly market at Orchha, we talked to some of the women, all in distinctive attire – a wraparound garment and a towel-like cloth around their blouse, and wearing ornaments of shiny white metal or silver. A few carry babies in slings. Most of the men wear a shirt and a lungi around the waist. Others, in trousers and shirts, are either local government officials, outsiders, traders or security personnel in plainclothes. 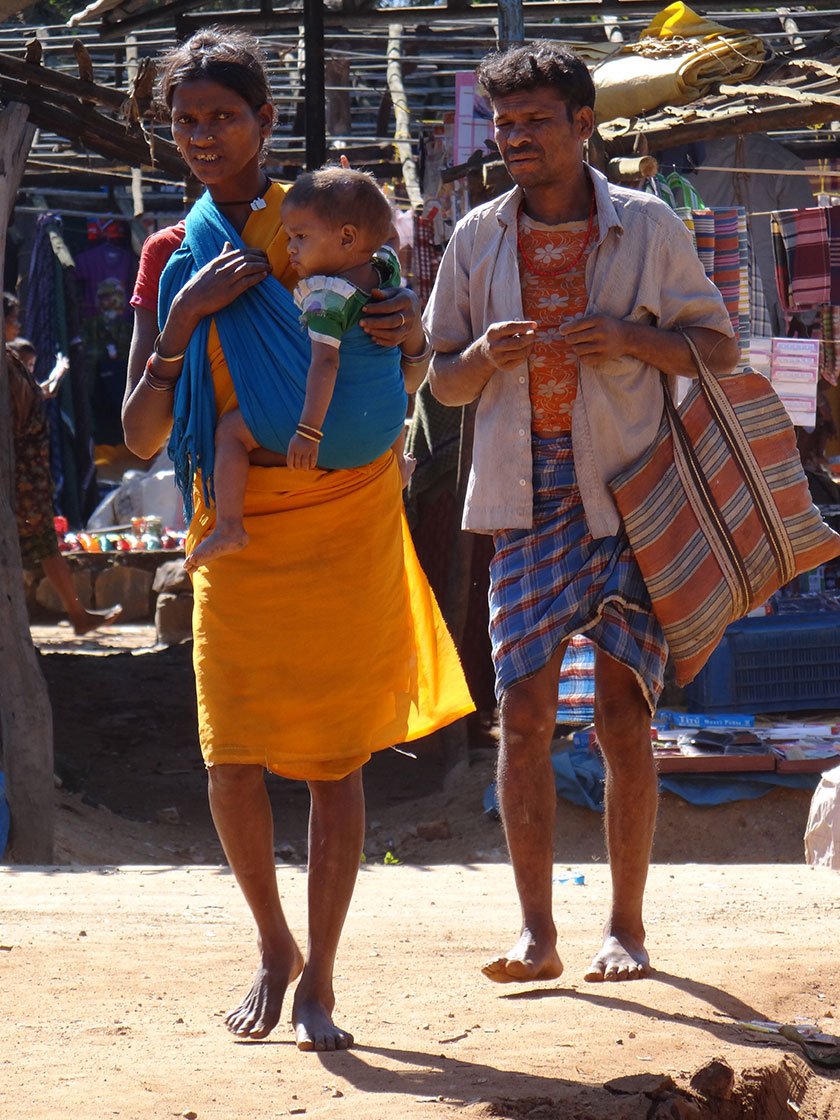 Abhuj Maria women usually carry babies in slings; the men's attire is usually a shirt and a lungi

The women talked to us, shyly at first, in Gondi. Two Gond tribal boys, who were accompanying us, helped translate the conversation into Hindi. The women said they bring forest produce from near their homes to sell in the market – bamboo brooms, charoli seeds, tamarind, local varieties of bananas and tomatoes – all in small quantities. 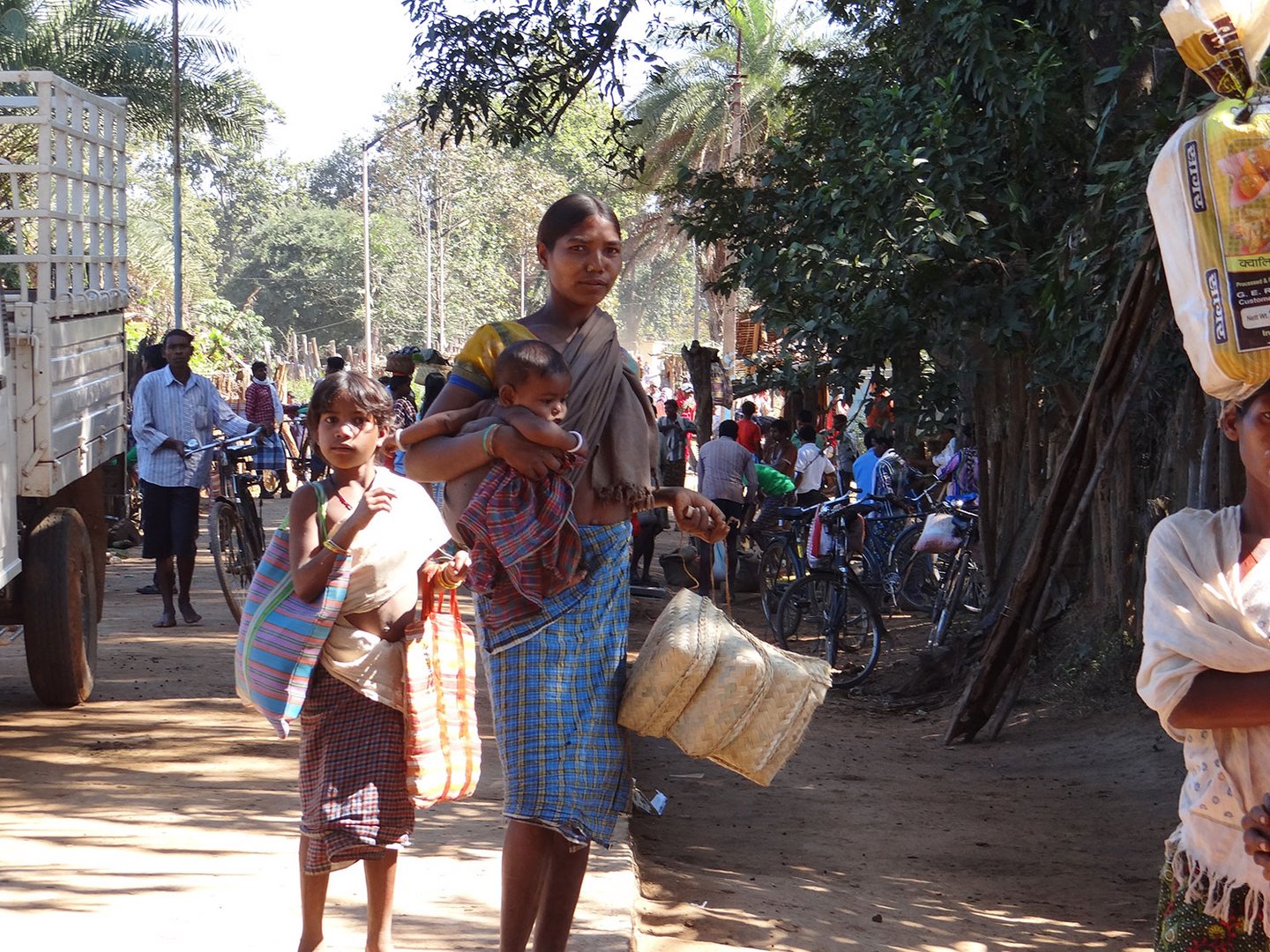 They also bring cocoons to sell. Abujhmadh has cocoons in abundance; these are the raw material for the famous Kosa silk saris made in Chhattisgarh’s northern plains of Bilaspur, Raigarh and Korba.

With the Rs. 50 or so the women earn by selling these items, they buy oil, soap, chillies, salt, potatoes, onions and other essentials. Just like the produce they bring to sell, they buy these items too in small quantities, to fit into their modest sling bags.

At the market in Orchha , not only will you find seasonal roots, green leaves and a wide variety of wild fruits, but also cheap mobile handsets, solar lights, battery-operated lights, table lamps and search lights. Even the occasional mini-inverter is sold here, because there is no electricity in many of the villages of the Madh.

Barefoot shoppers make the rounds, seeking necessities in a market that has a surprising range of goods

And because there is no cellular network in the remote hills, a local vendor tells us, the Adivasis use the mobile phones to listen to music, take photographs and videos, and as a torch.

Abhujmadh – the name means an unknown or mystery hill – stretches from Maharashtra’s Gadchiroli district to the west, to Chhattisgarh’s Bijapur districts in the south and Bastar in the east. The region is home to many of India’s tribal communities, including Gond, Muriya, Abhuj Maria and Halba. The Abhuj Maria population, according to independent and official estimates, seems to be in decline.

It is mostly hilly terrain, with many streams and dense undergrowth. The people are warm and welcoming. But the idyllic-looking locale is difficult to travel across or live in. Suvojit Bagchi, who has reported on Abhujmadh several times as a correspondent for the BBC, says, “The area is cut off for four months of the year due to rain, and we do not know how many die due to diarrhoea in that period… Every other person gets malaria throughout the year. I have never seen a functional school where teachers teach, there are no health care facilities, and basic treatment is sometimes provided only by the mobile squad of Maoists and a few local quacks.” 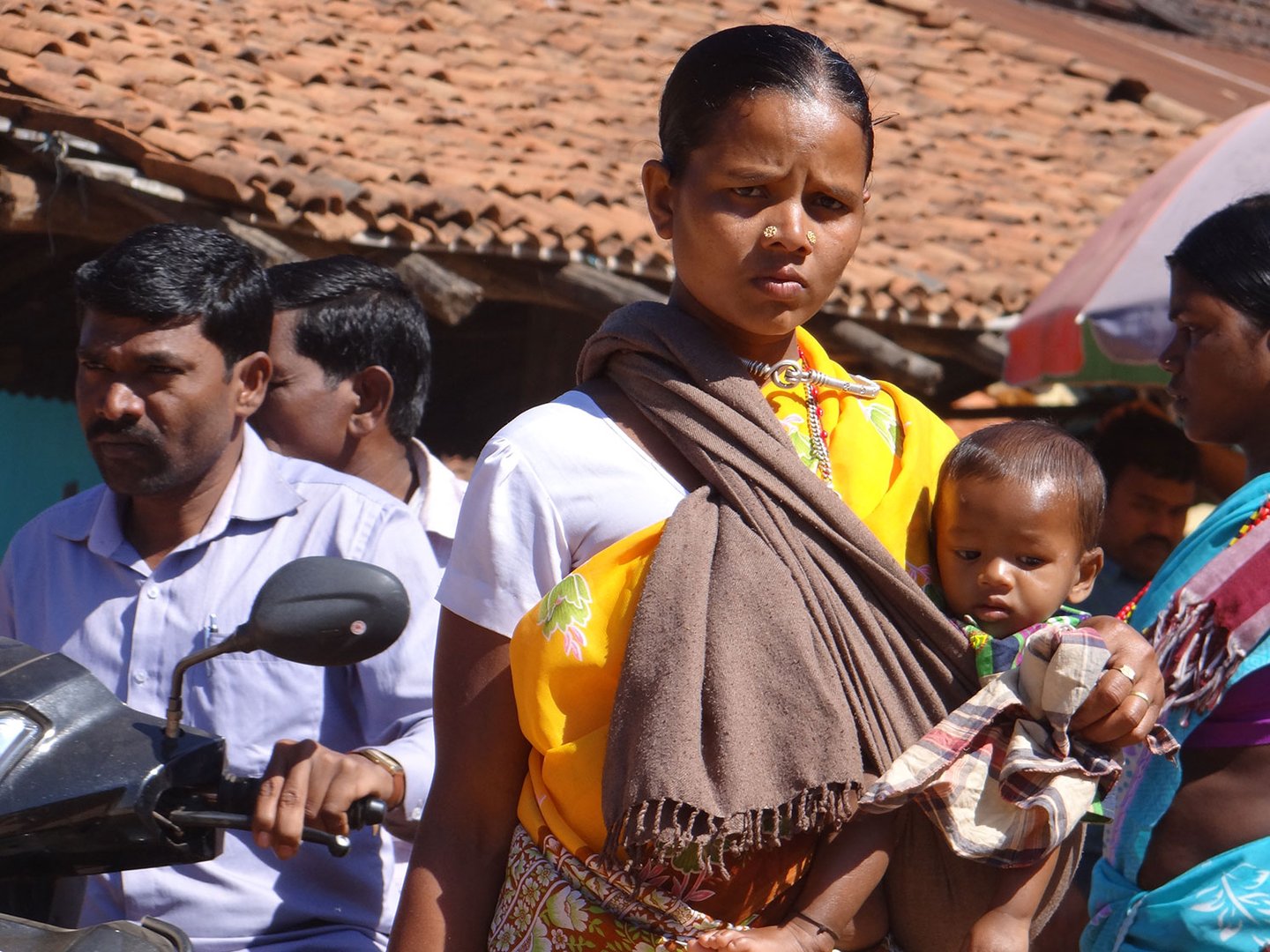 A few women get their babies some medical attention at the haat , often from quacks

Everyone is afraid of police operations in the fringe areas, and if the villages are depicted as idyllic, it must be only in the old diaries of anthropologists, not in real life,” Bagchi says.

The roads into Abhujmadh end at Orchha. Locals often travel nearly 70 kilometres to reach the haat , the only market in this vast region. The Adivasis get even their public distribution system rations at this market – and school children themselves come to collect the rice and dal for their mid-day meals.

Making their way to Orchha, the only haat in a large region, some walking in single file with heavy loads

For a while, volunteers of the Ramakrishna Mission had some access to the area, but the government stopped them from distributing food grains to the Adivasis.

Most children in the market look severely malnourished. We also see small girls from the local tribal ashram school buying vegetables. And we see UNICEF volunteers with the kids who come with their parents from the faraway hamlets of Abhujmadh. Women, especially mothers, are malnourished too. The UNICEF workers say they take the opportunity of the weekly market to do a round of health check-ups, a difficult task otherwise considering the inaccessibility of the villages. 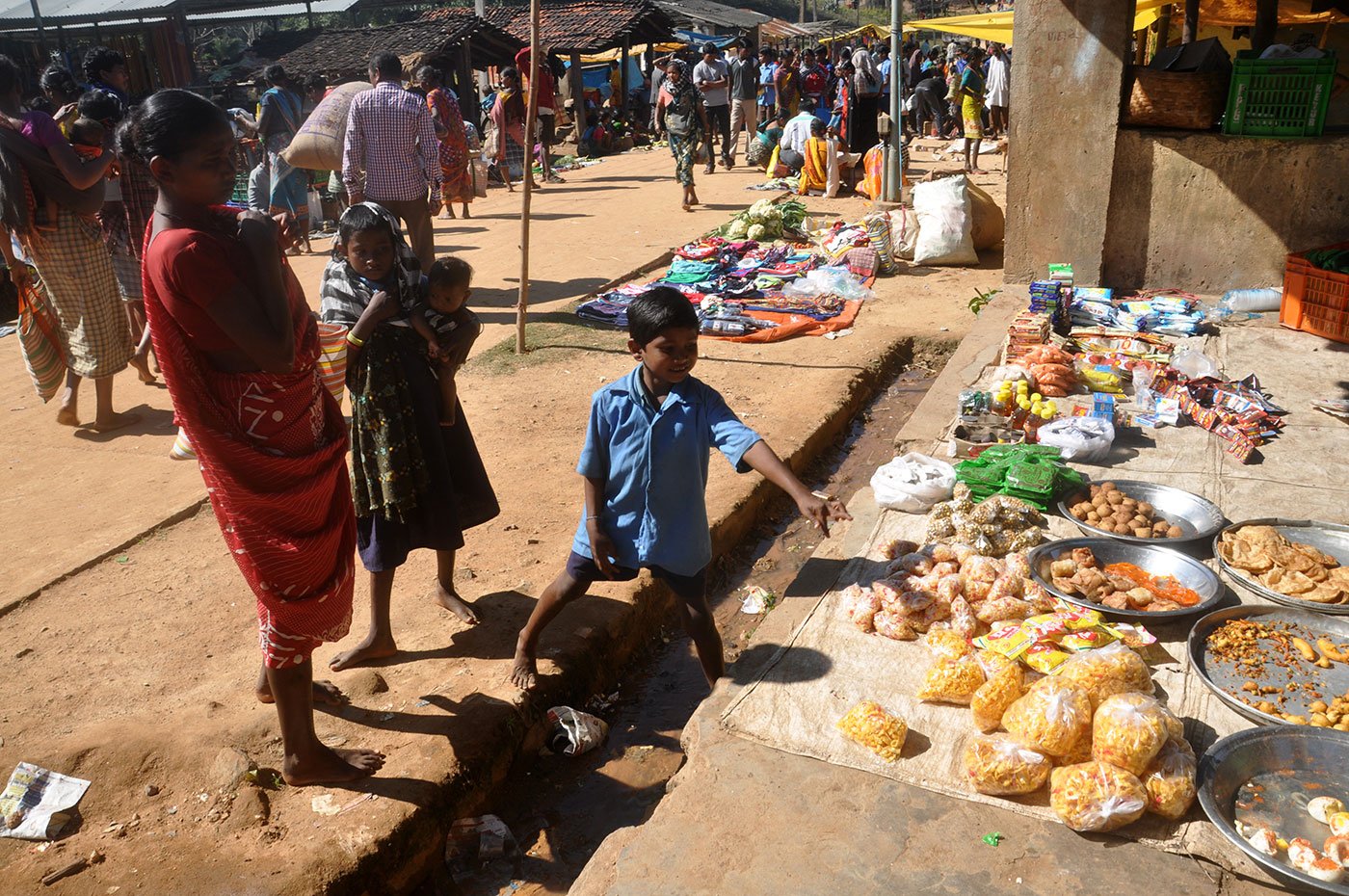 That kid knows what he wants, but his mom isn’t so excited by the crunchies and sweets he’s pointing to

There is another attraction at the Orchha haat : rice liquor ( londa ), sulfi, taadi, mahua and other local brews are sold in a section called the Londa market.

The market is also a space for village-mates to relax at the end of the day and have a drink. Young and old alike share equal portions of drink with their family members and share their sad and happy memories. 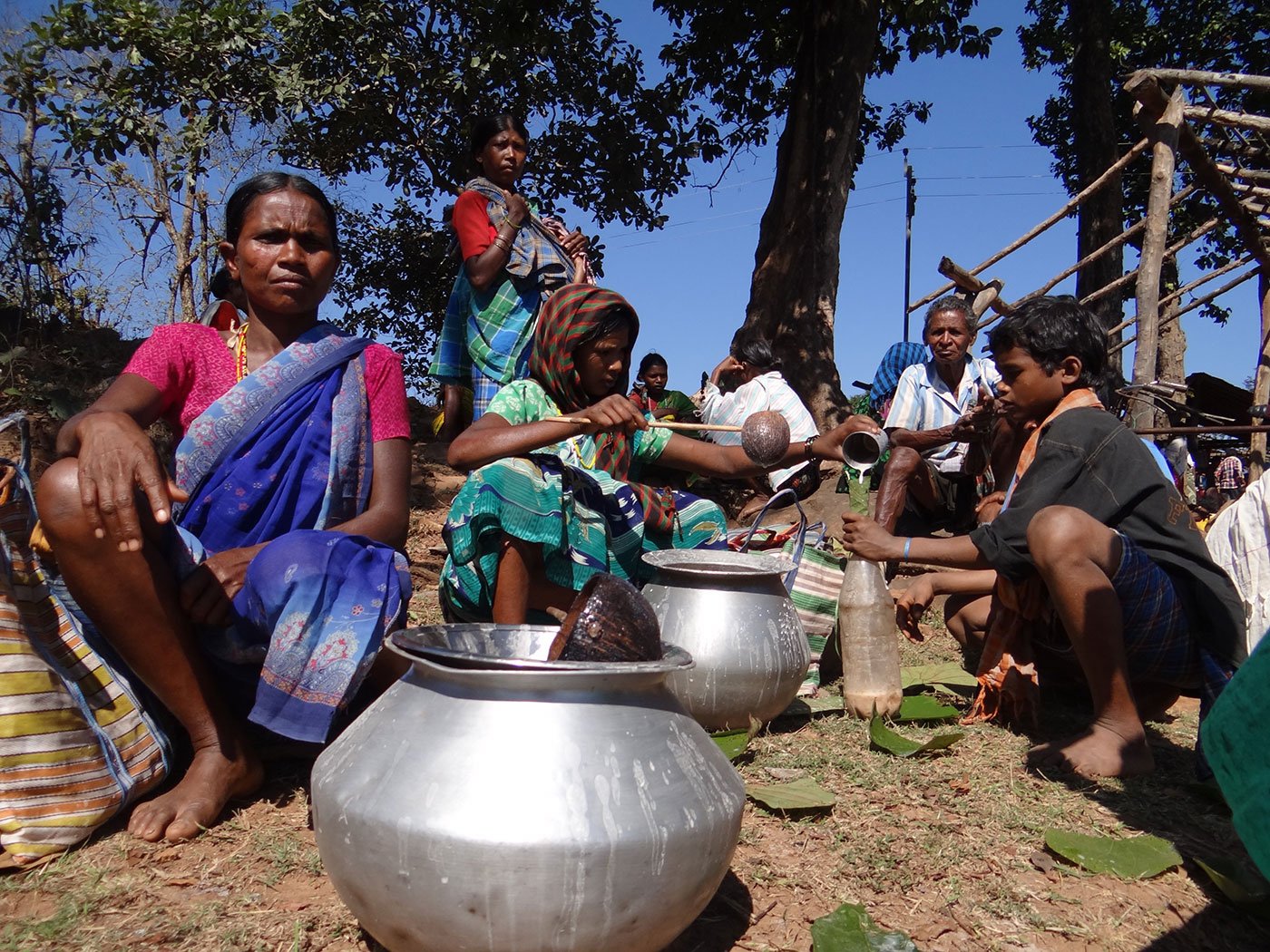 At the end of the day, the market is also a space for people to relax and have a drink

For journalists like me, the haat is also a collective place to pick up news that cannot be easily gathered from every village – information on agricultural produce, imported products, and the people’s changing abilities to sell, buy, exchange and survive.