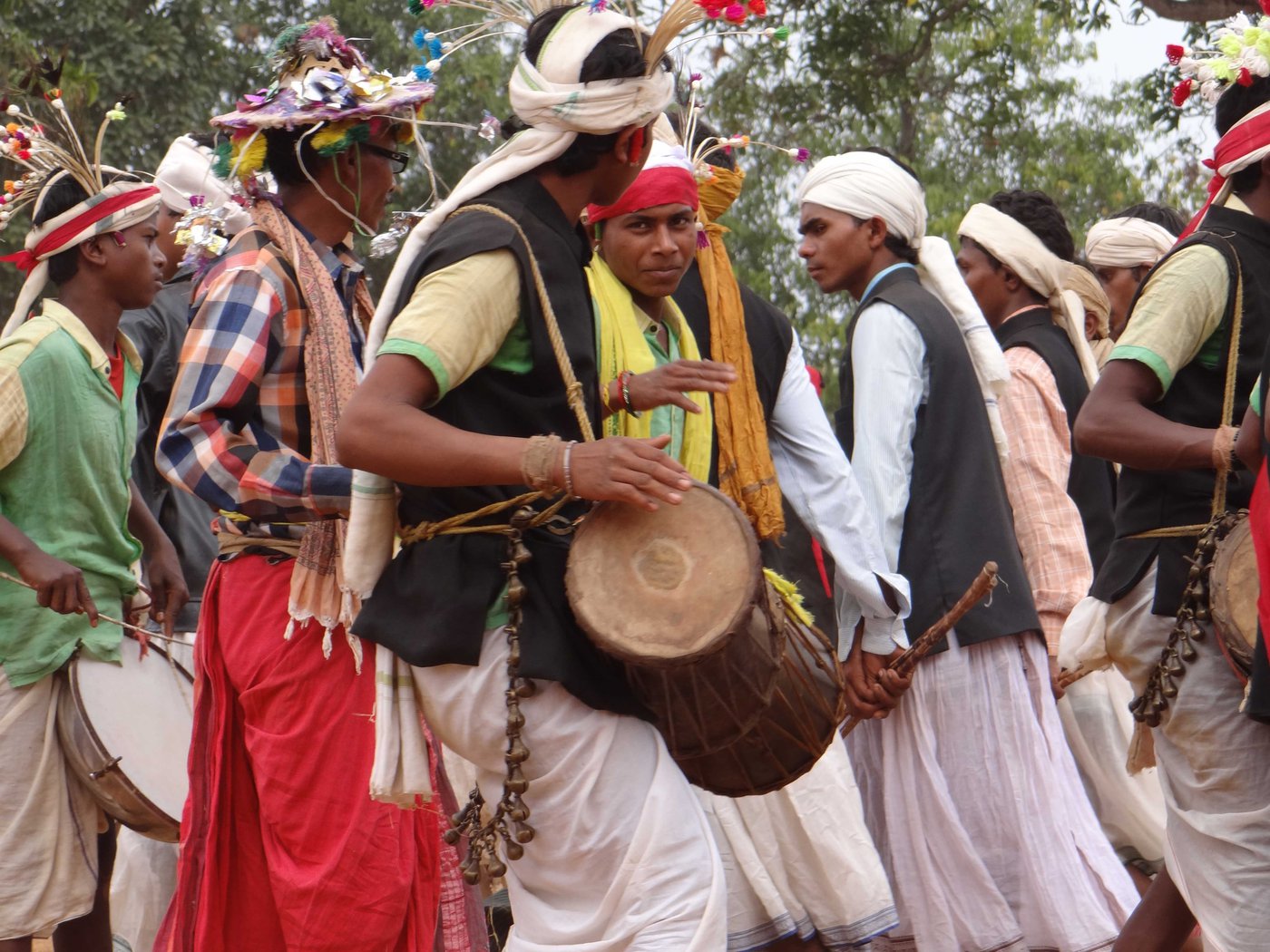 At celebrations and commemorations during the winter months, young men and women from Chhattisgarh's Gond community travel together to perform the Hulki Mandri and Kolang dances, and sing Rela songs

They moved with rhythm and agility – “ Re Rela re Rela re Rela re ” –  a group of young women in knee-length white sarees and bright headgear, moving three at a time, arms entwined, singing Rela songs that are popular among Gond communities.

Soon, a group of young men, also dressed in white, with white turbans decorated with colourful feathers, joined in. Their ankle bells rang in perfect rhythm with the complex footwork, while they played a small drum ( mandri ) held in their hands and sang Rela songs. Weaving their arms, the young women formed a chain encircling the group of men. All of them kept singing and dancing.

The troupe of 43 men and women from the Gond Adivasi community, ages ranging from 16 to 30, had all come from Bedmamari village in Keshkal block of Chhattisgarh’s Kondagaon district.

They had travelled more than 300 kilometres in a van to reach this venue close to the Raipur-Jagdalpur highway (in the Bastar region), about 100 kilometres from Raipur, the state’s capital city. Other dancers from Adivasi communities of central India and particularly from Chhattisgarh were here too for the three-day Veer Mela, celebrated from December 10 to 12 since 2015 to commemorate the sacrifice of Veer Narayan Singh , a tribal king of Sonakhan in Chhattisgarh’s Balodabazar-Bhatapara district. The king, who revolted against British rule, was captured and hanged in Jaistambh chowk in Raipur district by the colonial rulers in December 1857. The British, local accounts say, blew away his body after he was hanged.

The place where the festival is held – Rajarao Pathar – is considered a devasthan (a sacred place of worship) devoted to an ancestral god of Gond Adivasis. The three-day event is replete with songs and dances.

“Rela [or Rilo or Relo] brings the community together,” says Premlal Kunjam, president of the Sarva Adivasi Zilla Prakoshth (All Tribal District Cell). “Like flowers in a garland, people dance, hand in hand with one another. There is a feeling of power and energy.” The rhythm and lyrics of Rela songs, he explains, represent Gondwana culture (the traditions of the Gond community). “Through these songs we spread the message about our Gondi culture to our new generation,” says Premlal.

“Rela is the song form of god,” says Daulat Mandavi of Balodgahan village of Balod district. “According to our Adivasi tradition, this song is sung to draw the attention of the deities. If you are in pain or have any other problem in your body, it will disappear if you were to dance to Rela. These songs are also performed during weddings and on other occasions in Adivasi communities.”

At the Veer Mela in December, one of the youngest participants, Sukhiarian Kawde, a student of Class 8, said, “I love Rela.  It is a part of our culture.” She was excited to be with the troupe because it gave her an opportunity to visit different places to perform.

The group from Bedmamari village began with Rela songs and went on to perform the Hulki Mandri and Kolang dances. 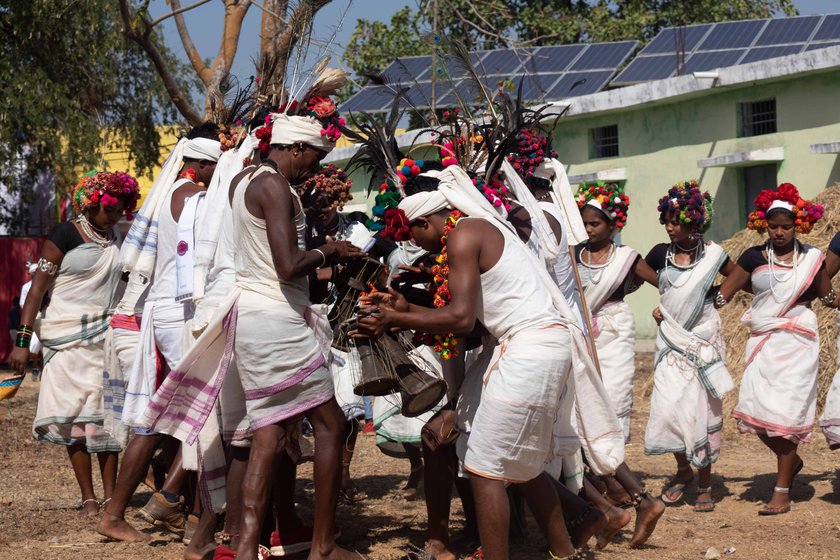 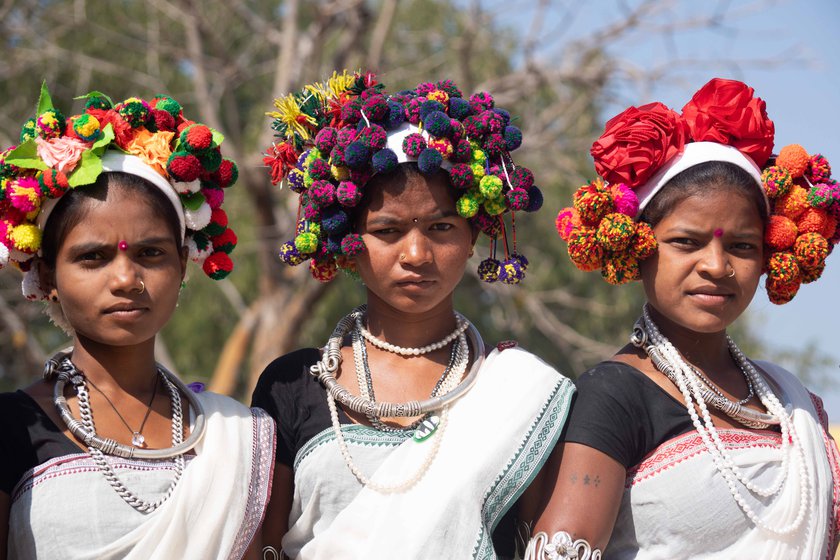 'The Mandri is traditionally performed during Hareli and goes on till around Diwali', says Dilip Kureti, an Adivasi college student

“The Mandri is traditionally performed during Hareli [a festival the starts when the seeds have germinated and the fields are green with tall seedlings during the kharif season and goes on till around Diwali],” says Dilip Kureti, an Adivasi college student. During this period, men with large drums ( mandar ) and women with hand cymbals, dance together.

The Pus Kolang is celebrated during the winter season, beginning from the end of December and going into mid-January (the Pus or Poush month in the lunar calendar). Young men from the Gond community travel to neighbouring villages performing Kolang dances to the rhythms of Rela songs – it’s an energetic, athletic dance performed with sticks specially made using wood from the dhawai (Woodfordia fruticosa) tree.

“At the time of Pus Kolang we go with our rations [to other villages] where we prepare food for ourselves during lunch and the host village provides us dinner,” says Somaru Korram, a senior leader of the troupe from Bedmamari.

The festival and dances come to an close when the travelling troupes returns to their own villages just before the full moon of the month of Poush lights up the night sky. 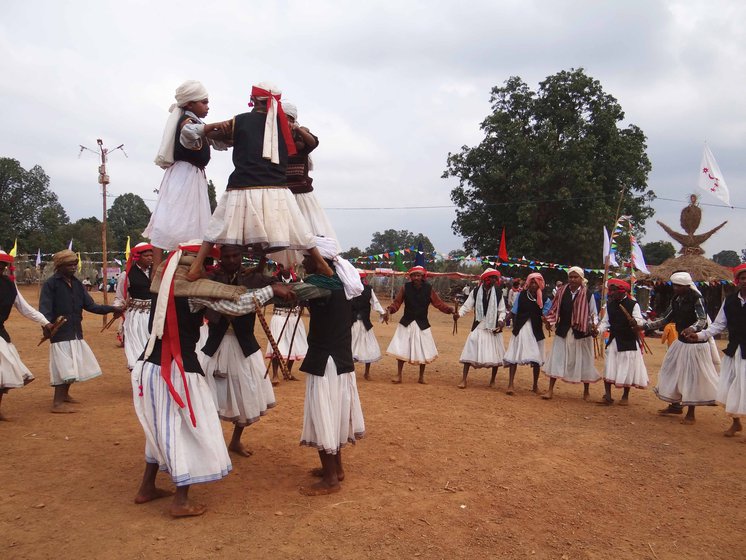 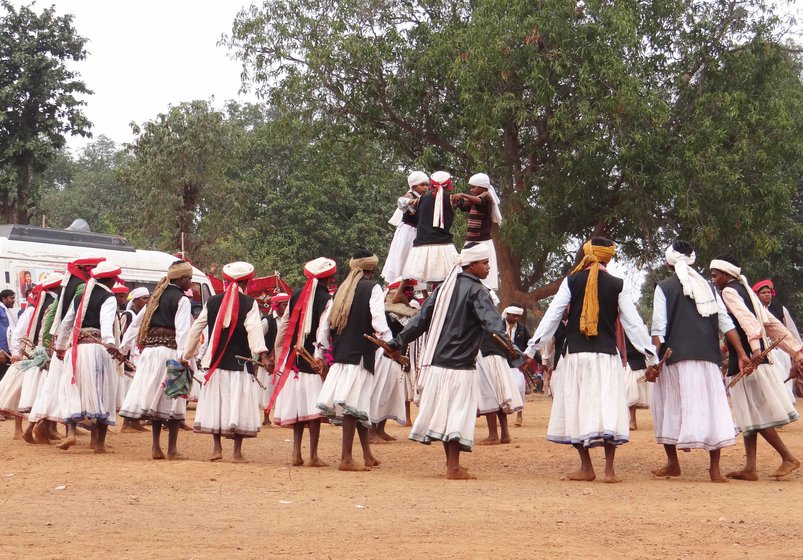 The Pus Kolang is celebrated during the winter season, going into mid-January (the Pus or Poush month in the lunar calendar)