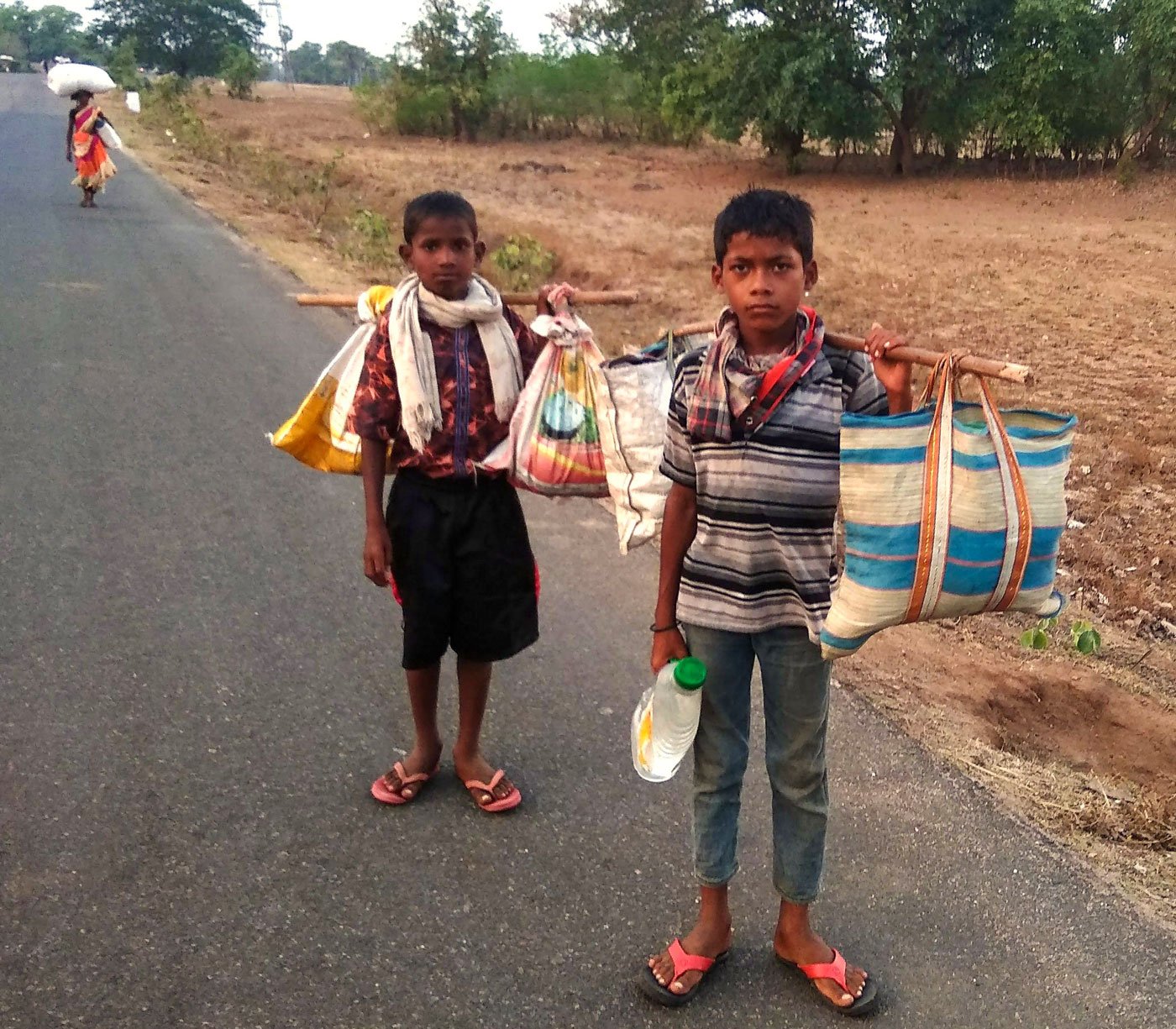 A 12-year-old Adivasi girl from Chhattisgarh, working in the chilli fields of Telangana, died on April 18 after walking for three days with other labourers desperately trying to return home. PARI visits her village

Jamlo was 12 years old. Sometime in February, she went to work in the chilli fields of Telangana. On April 18, after walking for three days with other labourers trying to return home during the lockdown, Jamlo died.

“She had left the village with her friends and other villagers without informing us. We got to know about it the next day,” says Sukmati Madkam, her mother. The family belongs to the Muria community of Adivasis.

The 12-year-old girl was on her way back to Aaded village of Bijapur district in the Bastar region of Chhattisgarh. She and a group of 11 other labourers, some of them children had gone to work in the fields near Kannaigudem village in Mulugu district of Telangana. ( T he cover photo on top is of one such group on the road on May 7. ) There, they plucked chillis, earning either Rs. 200 a day or sacks of chillis as pre-arranged payments. (See Children of the chilli fields )

“Jamlo had gone to work with her friends and other villagers. But when the work stopped, they were returning. I got a phone call from her when they left from Peruru village [in Mulugu district]. The last call I got then was from other villagers, about the death of my child,” says Andoram, Jamlo’s father. He and Sukmati, like almost all the Adivasi residents of Aaded village, make a livelihood from collecting forest produce, cultivating paddy, horse gram and other crops on small plots of land, and working as agricultural labourers or at MGNREGA sites.

“About two months ago, Jamlo went to Telangana as a labourer. But after the lockdown was imposed, the work stopped. The labourers were desperate to return to their village. They had exhausted whatever savings they had, and their contractor suggested they return,” says Pushpa Usendi-Rokade, a journalist from Bijapur, who is from the Gond Adivasi community and reports for a Jagdalpur-based newspaper. 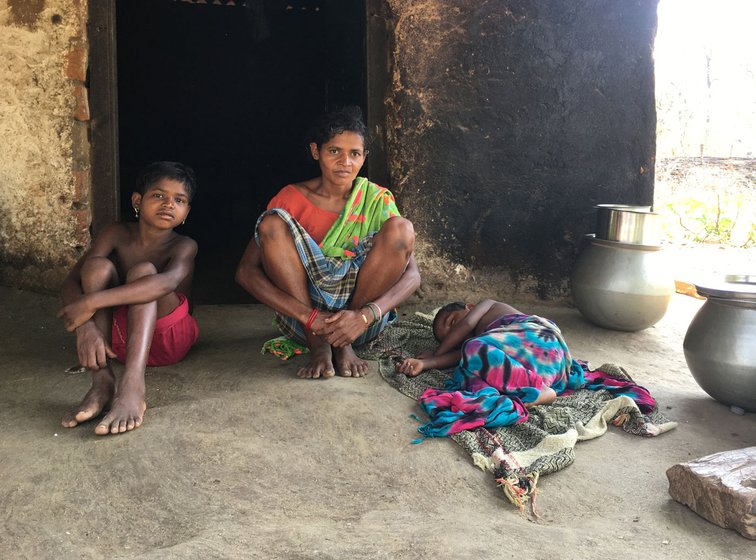 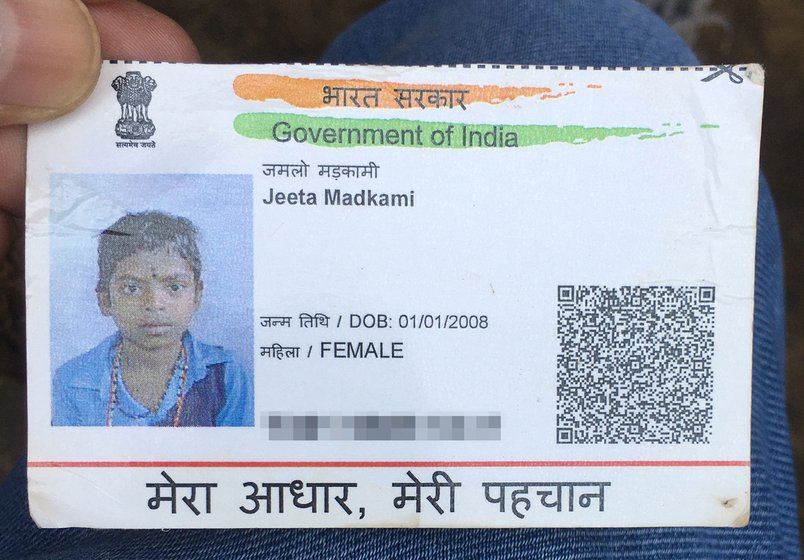 Sukmati with her younger daughter Sarita and infant son (left); she and Andoram Madkam had eight children; five have died, including Jamlo (right)

With no means of transportation during the lockdown, the labourers started walking back home – a distance of around 170-200 kilometres (this varies depending on the route) from Kannaigudem to Aaded village. They started on April 16, taking a forest route because the main road was closed. On the way, at night, they slept in the villages and in forests. It was an exhausting journey, but they managed to cover more than a 100 kilometres in three days.

On April 18, around 9 a.m., when the labourers, making their tired way home, were around 60 kilometres from home, Jamlo died. Several reports have since spoken of her complaining of stomach pain and headache, and that she fell and broke a bone. The official medical report was not available to us.

"She was a little girl, and walked so much [around 140 kilometres] for three days and collapsed when a distance of 55-60 kilometres more was left to reach her home," Dr. B. R. Pujari, Chief Health and Medical Officer, Bijapur, told us on the phone. "She might have collapsed due to exhaustion and muscle fatigue, which may not figure in the postmortem report. She also fell down on the way and was injured the previous day, say the other labourers."

Dr. Pujari got news of her death at around 11 a.m. "When I sent an ambulance they had already walked about 5-6 kilometres with the dead body," he says. The ambulance was sent from the nearest community hospital [in Usur] to take the Jamlo's body to the district hospital in Bijapur. "The other 11 members of the group went sent into quarantine as per Covid-19 guidelines,” Dr. Pujari told the media after the incident.

The crushing impact of the lockdown in remote tribal regions of India has barely been documented, but Jamlo Madkam’s story made it to the media. 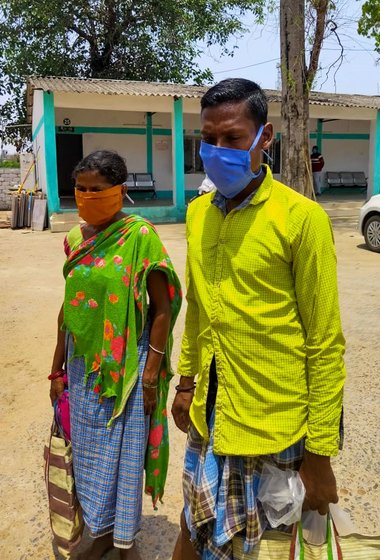 Since Jamlo was a migrant labourer who died on the way, the health authorities  conducted a coronavirus test. Her sample was sent for testing to Jagdalpur on Saturday (April 18) morning and it was reported negative on Sunday evening, Dr Pujari told the media. On Monday, her dead body was handed over to the family after a postmortem procedure.


“I gave birth to eight children, and of them four died at the age of crawling. And now Jamlo is dead too,” her mother Sukmati told Kamlesh Painkra, co-author of this story (he is a Bijapur-based journalist who belongs to the Kanwar Adivasi community of north Chhattisgarh).

Sukmati and Andoram have three other children. Budhram, 14, dropped out of school when some time ago; he had gone to collect tree bark to make rope for binding tendu leaves when we (Painkra) visited Jamlo’s home. Her six-year-old younger sister Sarita, who studies in Class 1 at the government-run school in the village, was bathing at the community borewell. And a two-year-old brother was at home with their mother.

The Madkam family did not have a ration card for some 10-12 years – the card they had before that had been cancelled on technical grounds. With their modest earnings, they would buy rice and other essentials from the open market at high rates. They have received a fresh BPL (below poverty line) card after Jamlo died. It too has errors – it mentions four Madkam family members, though there are five. Budhram’s and Sarita’s ages are incorrectly listed. (In Jamlo's Aadhaar card too, her name was incorrectly noted, in English, as Jeeta Madkami.)

Jamlo had attended the village school up to Class 3, but had to drop out to tend to the family’s four bullocks (one of them recently died). The family also keeps a few chickens.

Her village, Aaded, is in a remote area – over 400 kilometres from Raipur, the capital of Chhattisgarh. To reach Aaded, you have to go to Toynar village, some 30 kilometres from Bijapur, by a pucca road. From there it’s a dusty road, and the route includes crossing two streams. 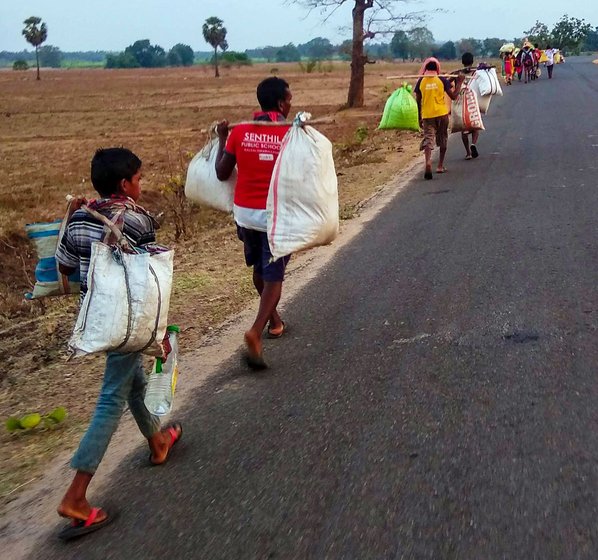 There are 42 families in Aaded village, which comes under the Mormed gram panchayat , says Budhram Kowasi, ward member of the village, who is from the Madia tribal community. The villagers mainly belong to four communities – the Muria and Madia tribes, and Kalar and Raut, which are OBC communities.

“Jamlo was just 12 years old and she went to Andhra [Telangana] for the first time to pluck chillis. People [from this cluster of villages] usually do not go to other states in search of work – though they do go up to Toynar or Bijapur,”  Budhram adds.

The chief minister of Chhattisgarh, Bhupesh Baghel, took note of Jamlo’s death. In a tweet on April 21 he said, “The tragic death of 12-year-old girl Jamlo Madkam of Bijapur is heartbreaking. In this difficult time as an immediate help, I give Rs. 1 lakh from CM Relief Fund and Rs. 4 lakh from the voluntary grant. Bijapur Collector has been instructed to investigate the matter & report.”

The labour department is also investigating the matter and has reportedly filed an FIR against a woman in Jamlo’s village and a labour contractor in Kannaigudem village of Telangana, for moving labourers across states, including minors, without being registered as contractors.

Many migrate in search of work from the border villages of Bijapur, Sukma and Dantewada in Chhattisgarh – some of them impacted by the Naxalite movement, all of them in search of a livelihood. They usually go to the vast chilli fields of Telangana and Andhra Pradesh. Chillis are an important ingredient in their meals, so many bring these back as wages.

Jamlo too must have gone hoping to bring something back for her family. The harsh road on her way home proved to be too long for the 12-year-old.

Kamlesh Painkra is a journalist based in Bijapur, Chhattisgarh; he works with the ‘Navbharat’ Hindi daily.