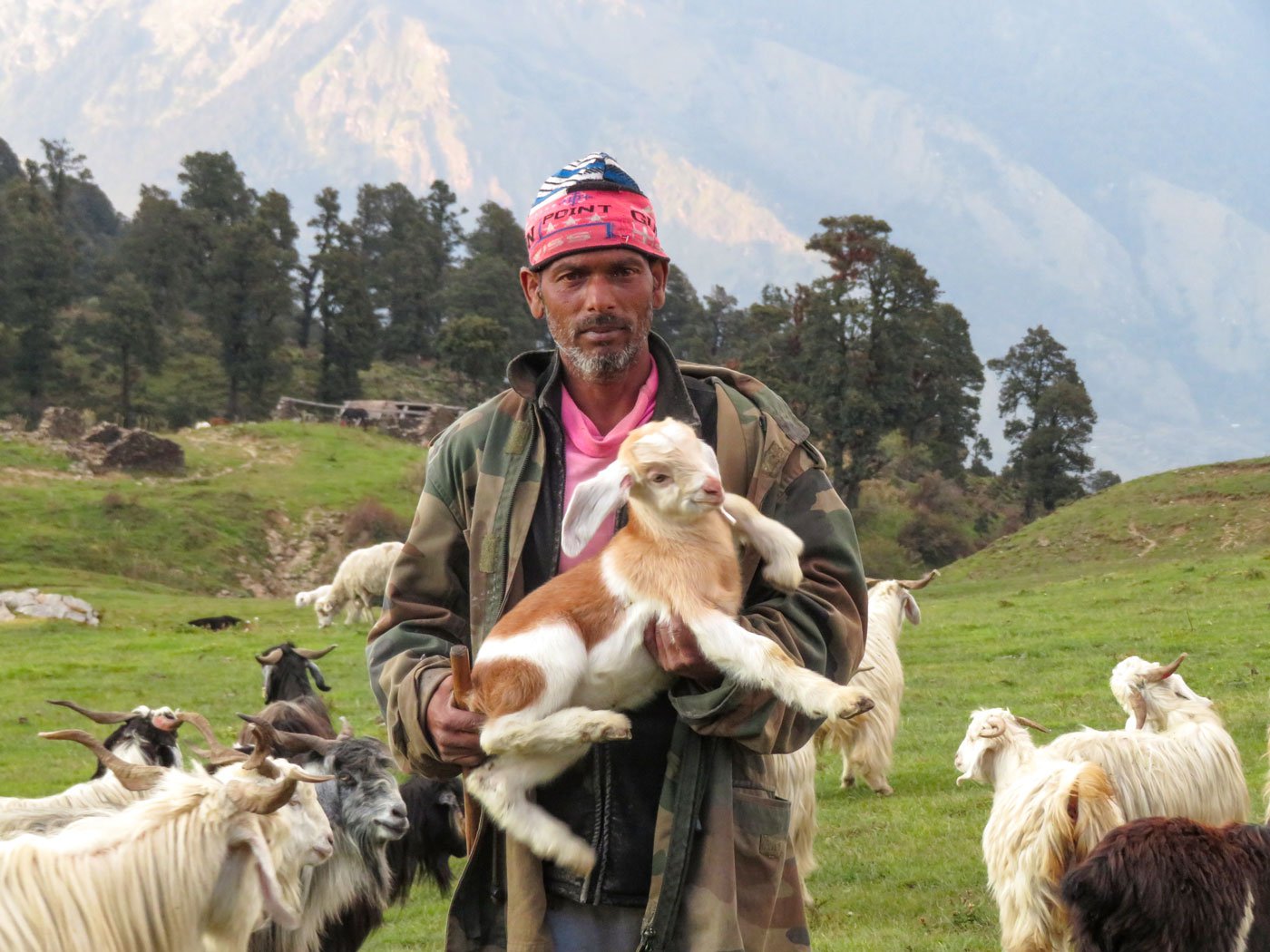 Shepherding in Garhwal: a dangerous life

In this region of the Himalayas, shepherds brave the wet and cold weather to graze their sheep and goats. They also protect them from wild animals on the Gangotri range where they live for up to nine months a year

“In a year we lose many animals to leopards. They come at night and snatch them away,” says shepherd Gaur Singh Thakur. Even the native Bhutia dog, Sheroo, cannot keep them away, he adds.

He is speaking to us high up on a mountain in the Gangotri range of the Himalayas. The animals he herds belong to seven families who live in and around Saura village of Uttarkashi district. Gaur Singh belongs to the same village that lies 2,000 metres below. He is under contract to look after the animals for up to nine months a year. Rain or snow, he must be out and about, herding, gathering and counting the animals.

“There are roughly 400 sheep and 100 goats here,” says the other shepherd, Hardev Singh Thakur, 48, looking at the herd scattered on the mountain. “There could be more,” he adds, a little uncertain of the exact number. Hardev has been doing this work for the last 15 years. “Some shepherds and helpers come for two weeks and go back, some like me stay on,” he explains.

It’s October, and a bitterly cold wind is whipping the grass up here on ‘Chuli top’, a meadow on the Gangotri range of the Garhwal Himalayas in Uttarakhand. The men have a blanket wrapped around as they move amongst the jostling animals. This is a good meadow, the shepherds say, the thin stream originating in a snow bank higher up is an assured source of water for the animals. It snakes through stony crevices as it descends, emptying more than 2,000 metres below into the rushing Bhilangana river, a tributary of Bhagirathi. 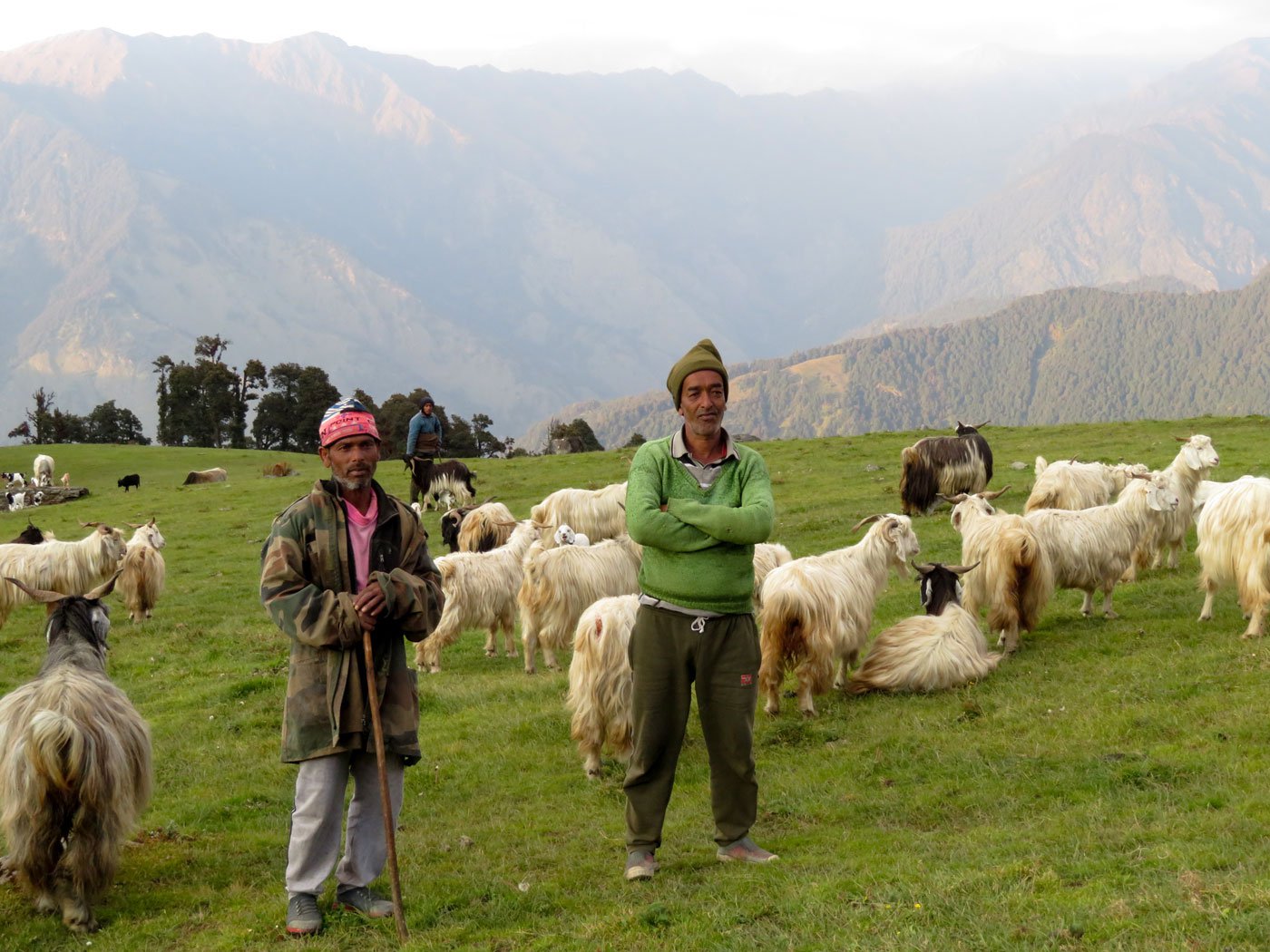 Guru Lal (left), Gaur Singh Thakur, and Vikas Dhondiyal (at the back) gathering the herd at sundown on the Gangotri range 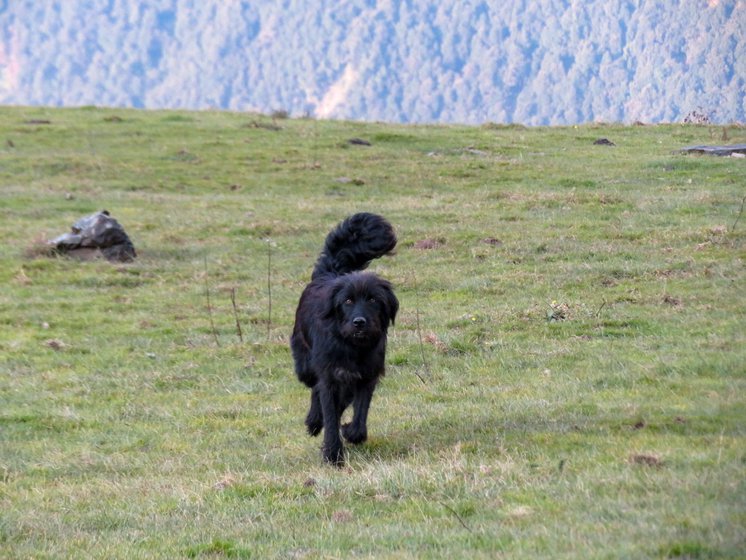 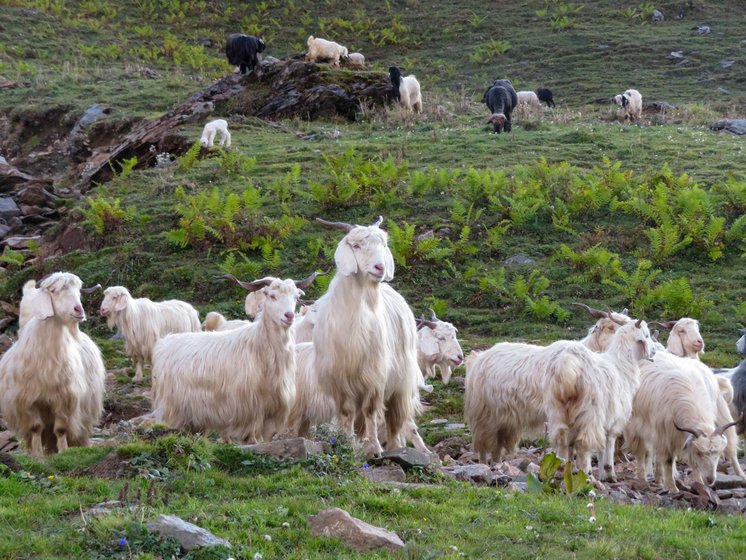 Left: Sheroo, the Bhutia guard dog, is a great help to the shepherds. Right: The sheep and goats grazing on Chuli top, above Saura village in Uttarkashi district

Minding hundreds of animals in the high mountains is a job fraught with danger. Above the treeline, large rocks and an undulating landscape easily hide predators, both two and four-legged. And then the sheep and goats could die of cold or disease. “We stay in the tents and the animals mill around us. We have two dogs with us, but leopards prey on the young lambs and kid goats,” says Hardev who owns 50 sheep in the herd; Gaur Singh owns about 40.

The shepherds and their two helpers have been up from 5 a.m., moving the bleating animals and nudging them further up the mountain. Sheroo is a big help, breaking up clusters of sheep so that everyone gets to feed.

The herd can cover 20 kilometres a day, sometimes more, in search of greener pastures. At high altitudes, grass is usually found below the permanent snow line. But finding such meadows with flowing water can be a challenge. Searching for grass, the shepherds have often gone more than 100 kilometres north, close to the India-China border. 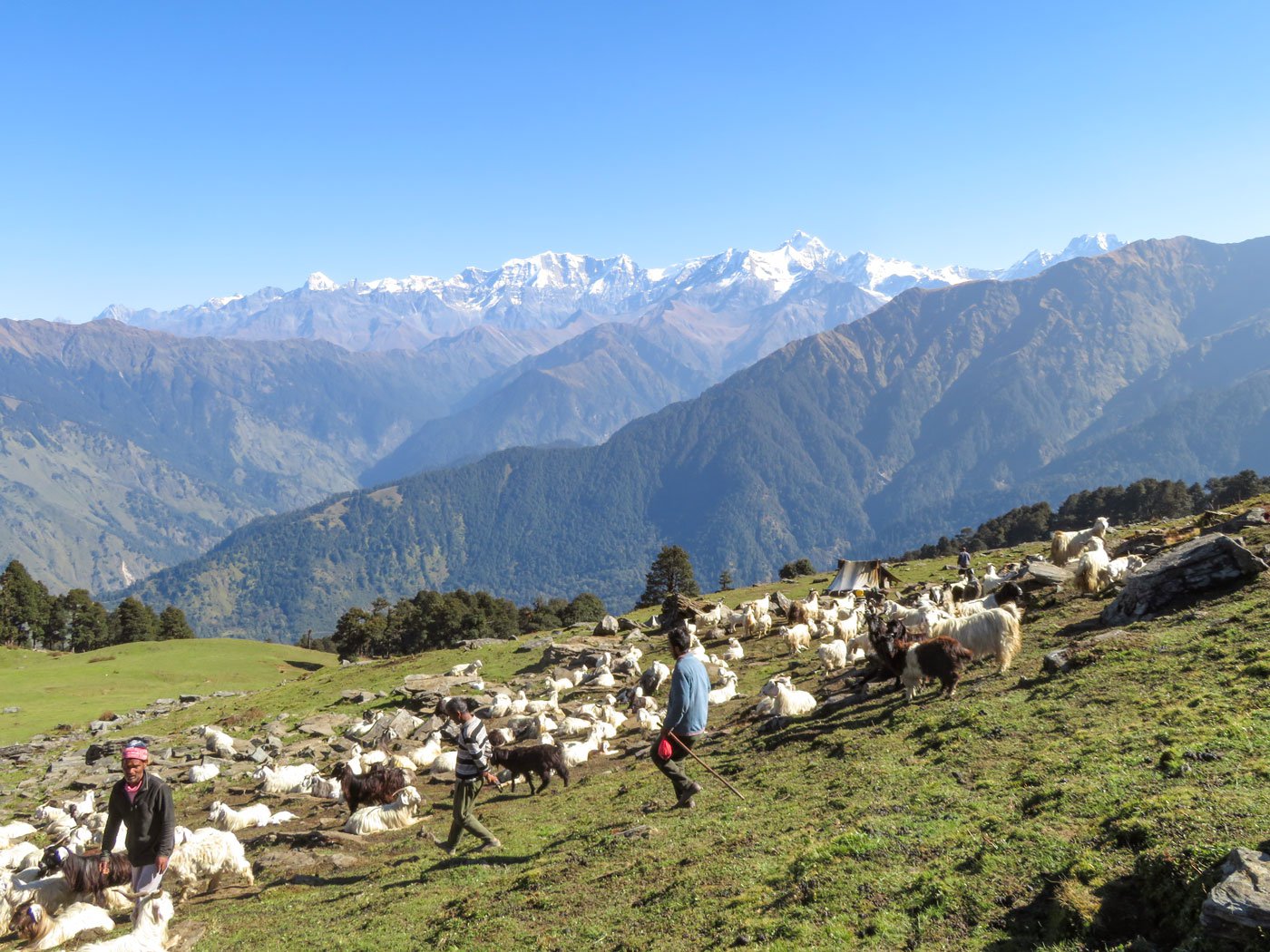 Guru Lal, Gaur Singh Thakur, Vikas Dhondiyal and their grazing sheep on the mountain, with snowy Himalayan peaks in the far distance

The men stay in small tents and sometimes make use of a channi – a crude stone enclosure meant for cattle – over which they throw a plastic sheet for roof. As they ascend higher up in search of grazing grounds, the trees thin and they spend time and energy going up and down, gathering dry wood for cooking.

“We are away from our homes for around nine months a year. We stayed up in Harsil, near Gangotri, for six months before coming here [Chuli top]; we have been here for two months. It’s getting cold so we will be descending now to our homes,” says Hardev, a resident of Jamlo, a hamlet near Saura in Bhatwari zilla of Uttarkashi district. He owns a little less than a bigha of land (a bigha is one-fifth of an acre) down in Saura. His wife and children look after the land, on which they grow rice and rajma for self-consumption.

For the three winter months, when the snow makes it impossible to move around, the herd and their shepherds stay in and around their village. The owners get to review their animals and take stock. The loss of an animal is deducted from the monthly 8,000-10,000 rupees that the shepherds earn from the owners who pay to have their animals looked after. The helpers are usually paid in kind – they could get around 5-10 goats or sheep as payment. 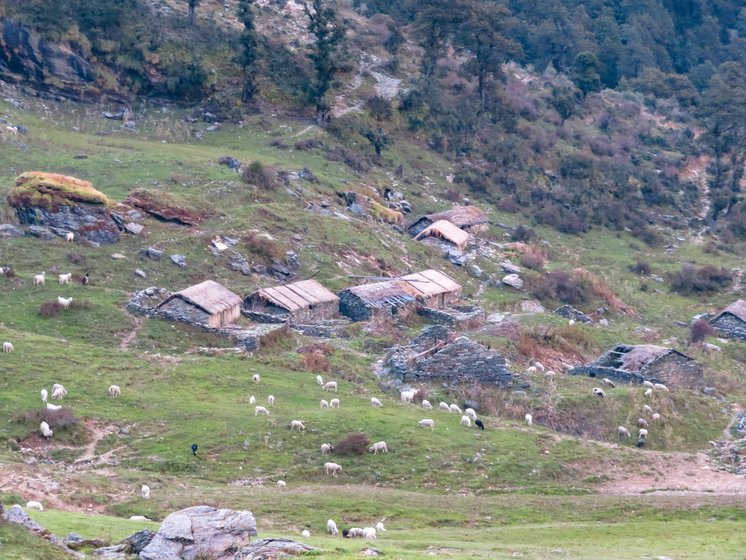 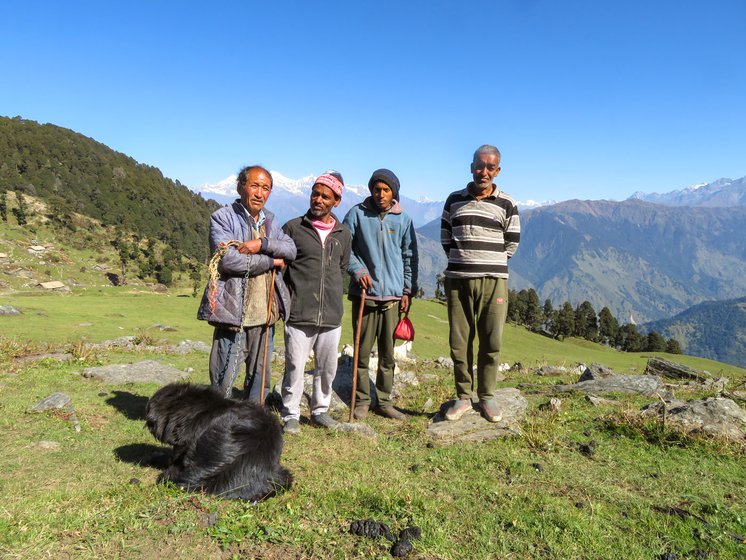 A sheep or goat sells for around Rs. 10,000 in small towns and district headquarters like Uttarkashi. “The sarkar [authorities] can do something for us; they can create a permanent place for us to sell our sheep and goats. That will help us get a better rate,” says Gaur Singh, who is nursing a cold. He says herders like him rely on passersby for a pill to alleviate symptoms, as they have no easy access to medical help.

“I have travelled over 2,000 kilometres on foot from Himachal Pradesh [stopping at other places] to find this work,” says helper Guru Lal, 40, from Dodra-Kwar tehsil in Shimla district. “There are no jobs in my village.” Lal, who is a Dalit, says he will get 10 goats as payment for nine months of work. He will either sell or breed the livestock when he returns home to his wife and 10-year-old son.

A lack of job opportunities is also why Hardev Singh became a herder. “People in my village leave for hotel jobs in Mumbai. It’s either cold or wet out here on the mountain. No one wants to do this job – it is more difficult than daily wage work. But where is the labour work?” he asks. 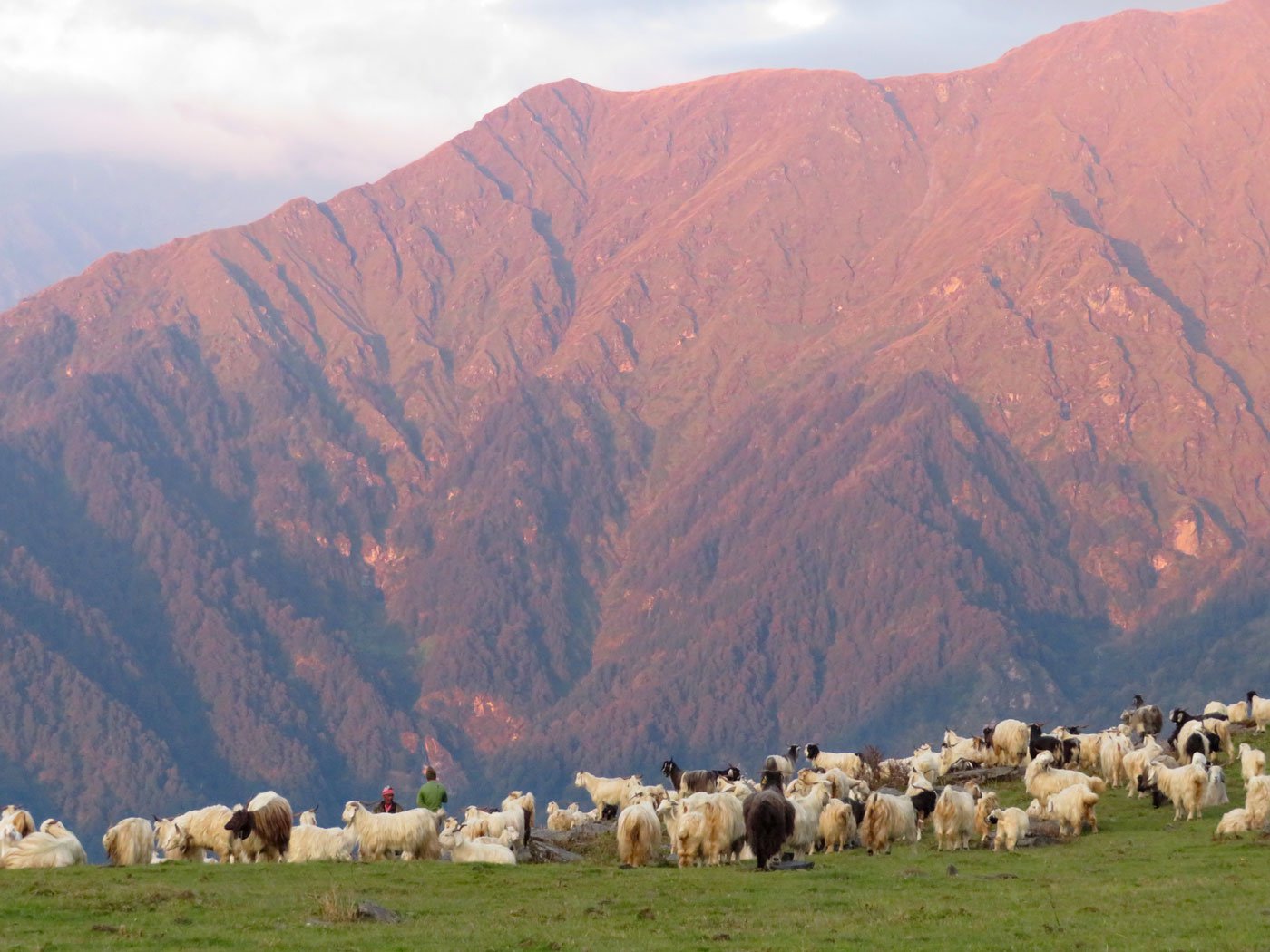 The shepherds at work, minding their animals, as the sun rises on the Gangotri range in the background

The reporter would like to thank Anjali Browne and Sandhya Ramalingam for their generous help with reporting this story.