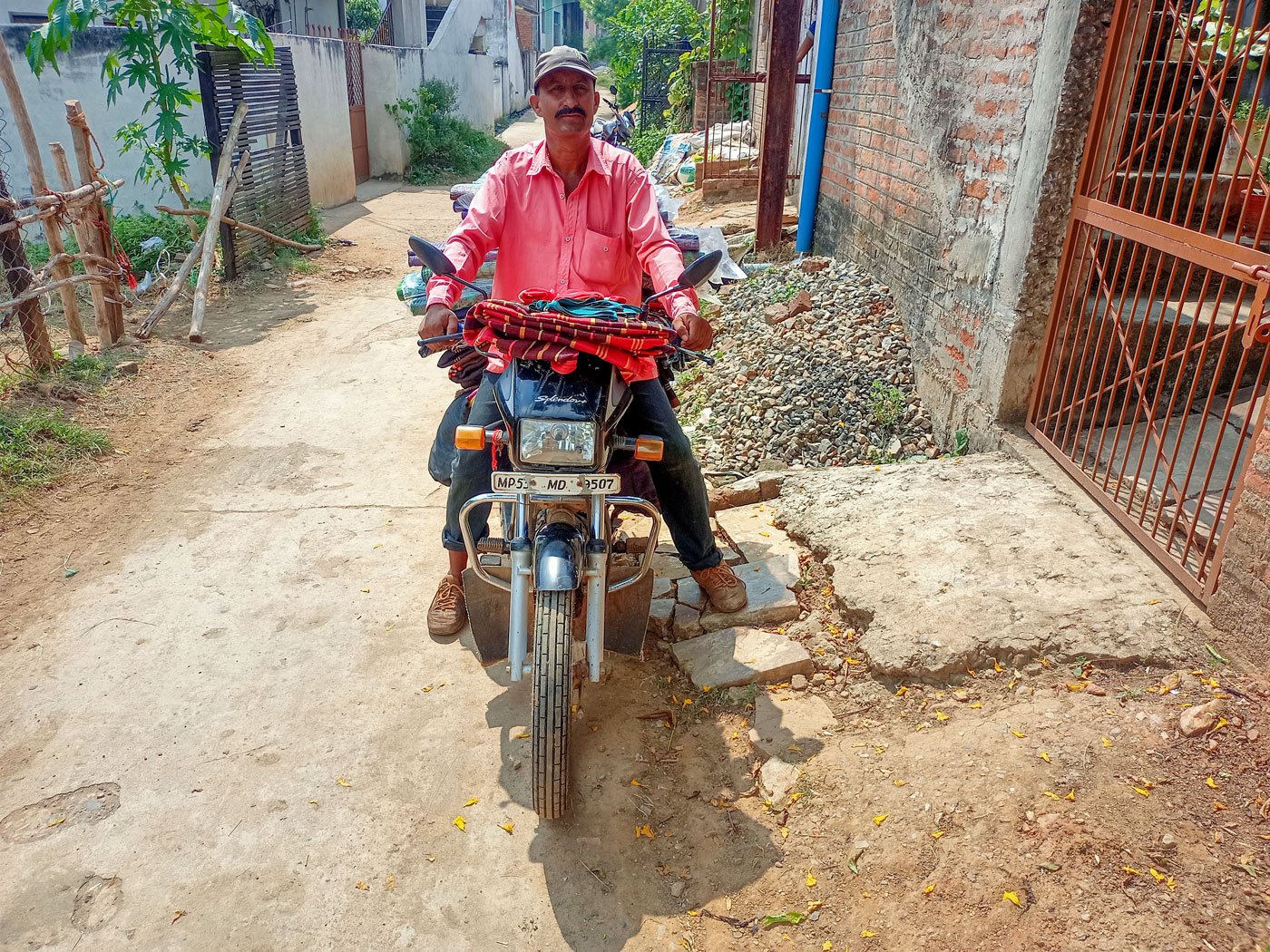 In Madhya Pradesh's Sidhi district, feriwalas who go to villages on motorbikes to sell sarees, sheets and other items say they survived the lockdowns but the rising cost of petrol is decimating their business

It’s time for his first sales pitch of the day. Bachu stops his motorcycle near a group of  9-10 women gathered at a handpump in Shivpurwa village. “Didi, please look at the design,” he says. “You will not get such sarees even in the big shops in Sidhi market. There is no compulsion to buy if you don’t like.”

Then, to try and ensure his first sale of the day, a hopeful Bachu offers a hefty discount: “The price of each saree is 700 rupees but I will give it to you for only 400…”

The women examine each of the 15-20 nylon sarees in the gathar (stack). One of them says she will give 150 rupees. A miffed Bachu starts gathering his collection, tying the stack with a rope, muttering that even the purchase price of the saree is 250 rupees. The woman who might have been his first customer of the day turns back to the handpump.

Disappointed, Bachu gets onto his motorcycle to move on to Madwa, the next village on his route that day. “Sometimes people waste so much time but don’t buy anything,” he grumbles, speaking in the local Bagheli language. “A lot of our time is wasted in just folding and unfolding the sarees and making the gathar .”

He stops at the handpump in Madwa, roughly three kilometres later, to drink water. “Four hours have passed since I started my journey,” he says. “But I haven’t even done my bohni [first sale of the day, considered auspicious]. This morning I spent 150 rupees on petrol and have not earned even that.” 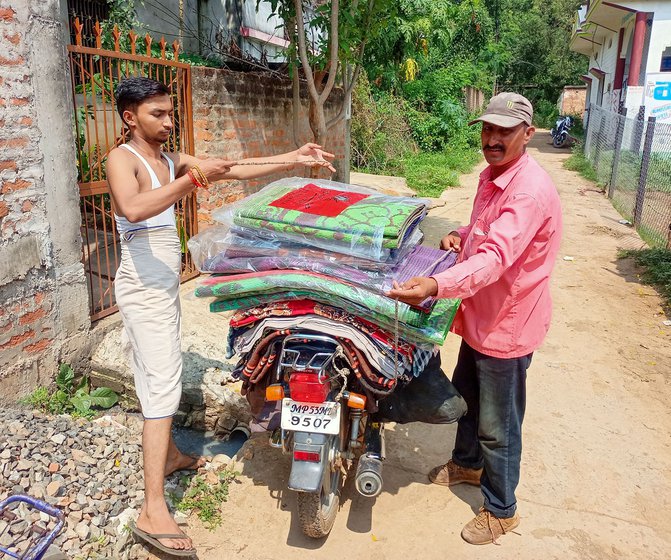 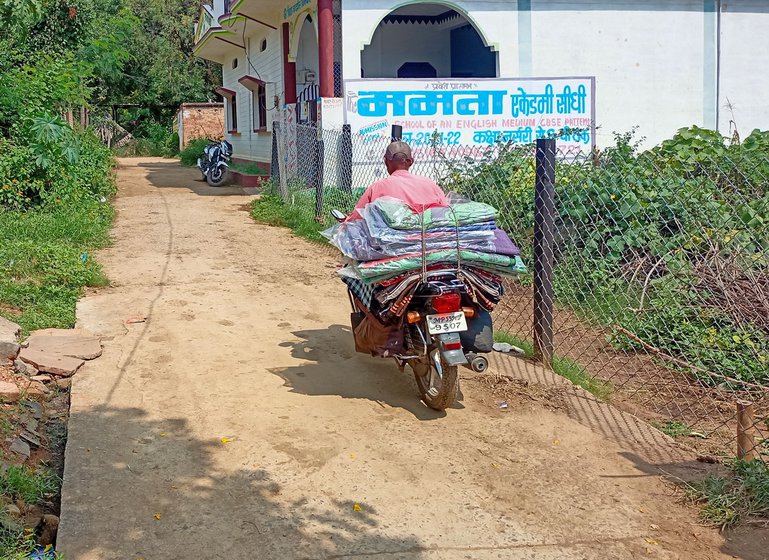 Bachu (with his son Puspraj on the left) visits 9-10 villages across 30 to 50 kilometres on his motorcycle t o sell sarees, chatais and other items

Bachu Jaiswal had started out around 10 that morning from his home in Sidhi town of Madhya Pradesh's Sidhi district, located along the border with Uttar Pradesh. He and other feriwalas – itinerant salesman – in these parts go home-to-home in rural areas to sell sarees, blankets, bedsheets, cushion covers, chatais , plastic shoes and other items at discounted prices. They usually buy these items in bulk from the big markets in Katni district, around 200 kilometres away. Their customers are mostly women who don’t have regular access to big marketplaces.

Among them is Madhu Mishra, a 32-year-old farmer in Sadla village, around 20 kilometres from Sidhi town. “It is convenient for me to purchase from feriwalas because I don’t get much time from farming to go to the market. I purchase 3-4 sarees and 4-5 bedsheets every year,” she says. “Bachu used to give me a good saree for 200 rupees and a bedsheet for 100. But now he charges more than 250 for a saree and 150 for a bedsheet – which is unaffordable for me.”

Bachu though says this is unavoidable. The repeated hikes in petrol prices, he says, are crushing small traders like him.

On September 29, 2021, the cost of petrol in Madhya Pradesh was Rs. 110 per litre, up from Rs. 78 per litre in September 2019 (it reached a high of Rs. 120 on November 3, before falling a bit). For long, Bachu used to routinely fill petrol worth Rs. 100 in his motorbike before setting out for the day. Despite raising this to Rs. 150, the petrol he gets in return has reduced – and this has meant cutting down on the villages and kilometres he covers everyday with his gathar .

In over two decades of working as an itinerant salesman, Bachu has managed to stay afloat despite family debts, illnesses and even the lockdowns. However, it’s the escalating petrol prices that might be the last straw for him. Over the years, due to rising costs and falling sales, many feriwalas , he says, have given up, and are working as daily wage labourers or remain unemployed. They are not even eligible for any state-mandated benefits because they are not licensed or recognised as vendors, or covered by any schemes. (The video with this story features another feriwala , Jagyanarayan Jaiswal, from Tikat Kalan village in Sidhi district, who speaks of similar problems.)

Over the years, due to rising costs and falling sales, many feriwalas have given up, and are working as daily wage labourers or remain unemployed

Watch the video: 'Now the problem is that petrol has become very expensive’ says Jagyanarayan Jaiswal, a feriwala from Sidhi district

But the feriwala business – usually handed down across generations in a family – was profitable in the past, says 45-year-old Bachu. “I used to walk carrying the clothes on my head for the first six years,” he recalls, when he started in 1995. The gathar , he estimates, weighs around 10 kilos. “I would walk 7-8 kilometres every day and earn 50 to 100 rupees.”

Then and now Bachu sets out on his sales rounds only in the winter and summer months – November to May. “We avoid going on feri during the rainy season [mid-June to September] since our gathar can get wet and damaged, and mud clogs the village roads.”

The sales journeys in the summer are difficult too. “Driving a motorbike for hours in the searing heat when the temperature is 45 degrees [Celsius] is extremely tough,” he says. “Still, we try to earn as much money as possible throughout the summer to make up for the lack of income during the rainy season.” 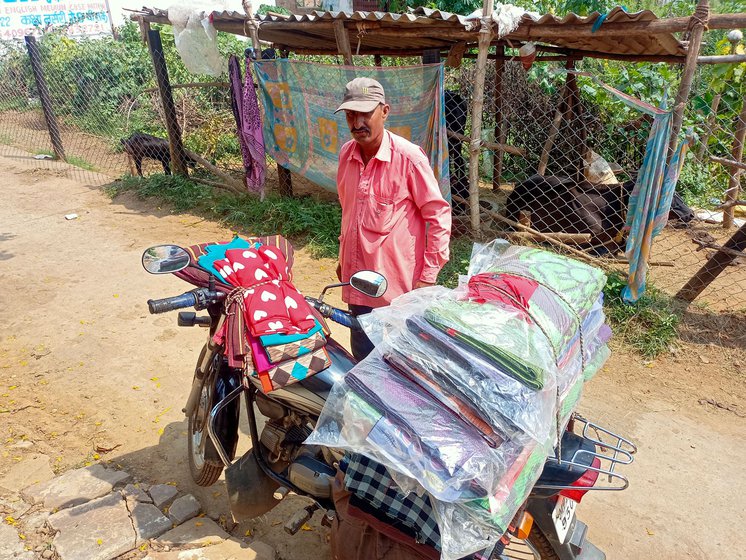 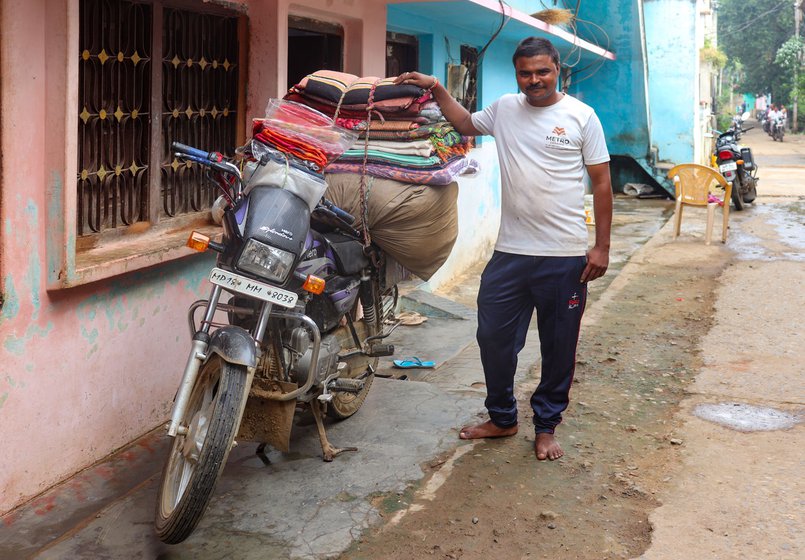 'Driving a motorbike for hours in the searing heat when the temperature is 45 degrees [Celsius] is extremely tough'. (On the right is Sangam Lal, a feriwala from Tikat Kalan village, whose father, Jagyanarayan Jaiswal, is featured in the video with this story)

Bachu managed during the lockdowns with his savings and his farm. He owns 0.5 acres of land in Kubri, his village, roughly 20 kilometres from Sidhi town. He sows paddy in the kharif season and wheat during rabi , taking several breaks from the feri every month to work on the land. “Every year, we get about 300 kilos of wheat and 400 kilos of paddy [which is used for the family’s meals], while we buy pulses and other grains from the market,” he says.

In March 2021, at the beginning of the second wave of Covid-19, Bachu tested positive. “I was bedridden for over two months and spent nearly 25,000 rupees on treatment in a private hospital,” he says.

“During those months, we had no source of income,” adds Bachu’s wife, 43-year-old Pramila Jaiswal. “At that time, my father [a farmer] gifted us four cows. Every day now I get five kilos of milk which I sell in our colony, and earn 3,000-4,000 rupees every month.”

In the afternoons, Pramila walks to the grasslands on the outskirts of  Sidhi town to gather fodder for the cattle. Bachu assists her in cleaning the cowshed and feeding the animals after returning from his sales rounds around 6 in the evening.

Before the first lockdown, Pramila used to sell vegetables. “I started selling these in nearby colonies in 2010, carrying a basket on my head,” she says. “Every day, I would walk three kilometres to the sabji mandi to buy them at a lower price, and would earn 100-150 rupees a day.” She stopped this work after her younger daughter Pooja, 22, got married in February 2020. “She used to cook food for the family while I went to sell vegetables. After her marriage, I have to do the cooking,” she says. 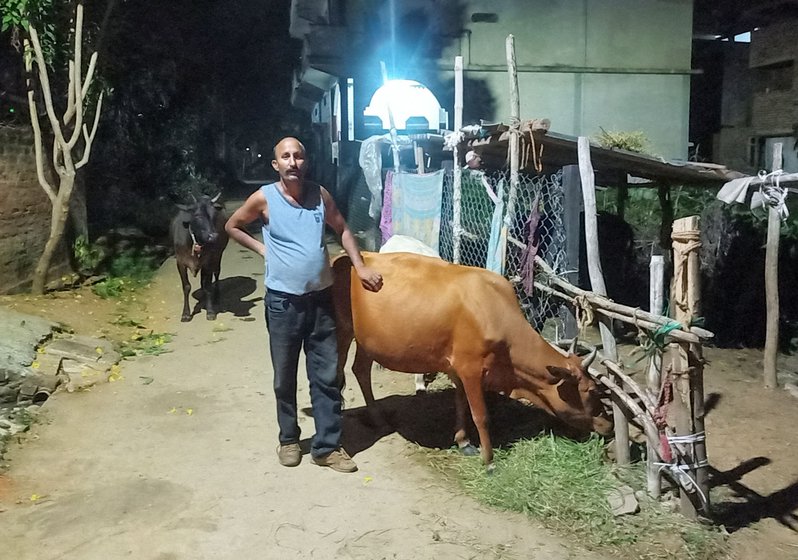 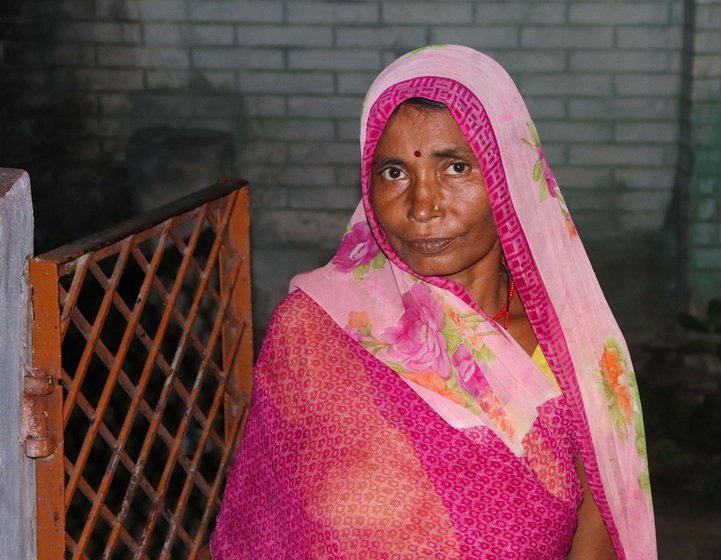 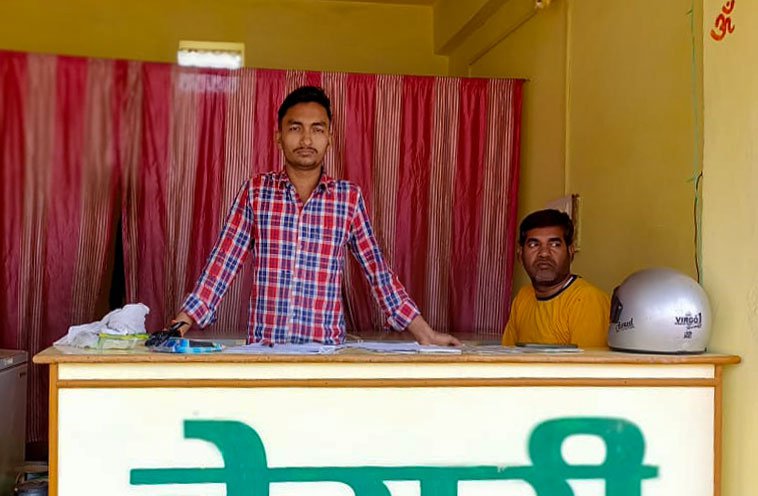 Pramila, Bachu's wife (centre) began selling milk in the colony during the lockdown; their son Puspraj (right) hopes to find a government job after college

Pramila and Bachu have two other children: their eldest daughter, Sangeeta, 26, got married in 2013, and 18-year-old son Puspraj is studying in a college in Sidhi.

“Even though we could not afford it, we enrolled all our children in a private school,” Pramila says. Wedding expenses and dowry for Pooja has placed them further in debt – of which 1 lakh rupees remains unpaid. “I don’t know how I was going to repay these debts,” she adds.

Puspraj works as a helper in a local dairy, earns Rs. 150 every day, and pays his own college fees from this income. “I am working to collect enough money so that I can take coaching classes [for competitive exams or to apply for a government job," he says. "I am allowed to study in the dairy when there are no customers."

The family though is struggling with the impact of the petrol hike. “Before the lockdown [in March 2020], when the petrol price was around 70-80 rupees per litre, I could make 7,000-8,000 rupees every month. The demand for our goods was high in villages. Many customers used to wait for us so that they could purchase clothes from us,” Bachu says.

“Now, despite the rise in petrol prices and our cost of transportation, people expect us to sell sarees and other items for the same price, or they refuse to buy,” he adds. “This is how our profits have fallen. I hardly make even 200 rupees after working from morning to evening. Our business has been destroyed due to petrol prices.”

Anil Kumar Tiwari is a freelance journalist based in Sidhi town of Madhya Pradesh. He mainly reports on environment-related issues and rural development.

Other stories by Anil Kumar Tiwari