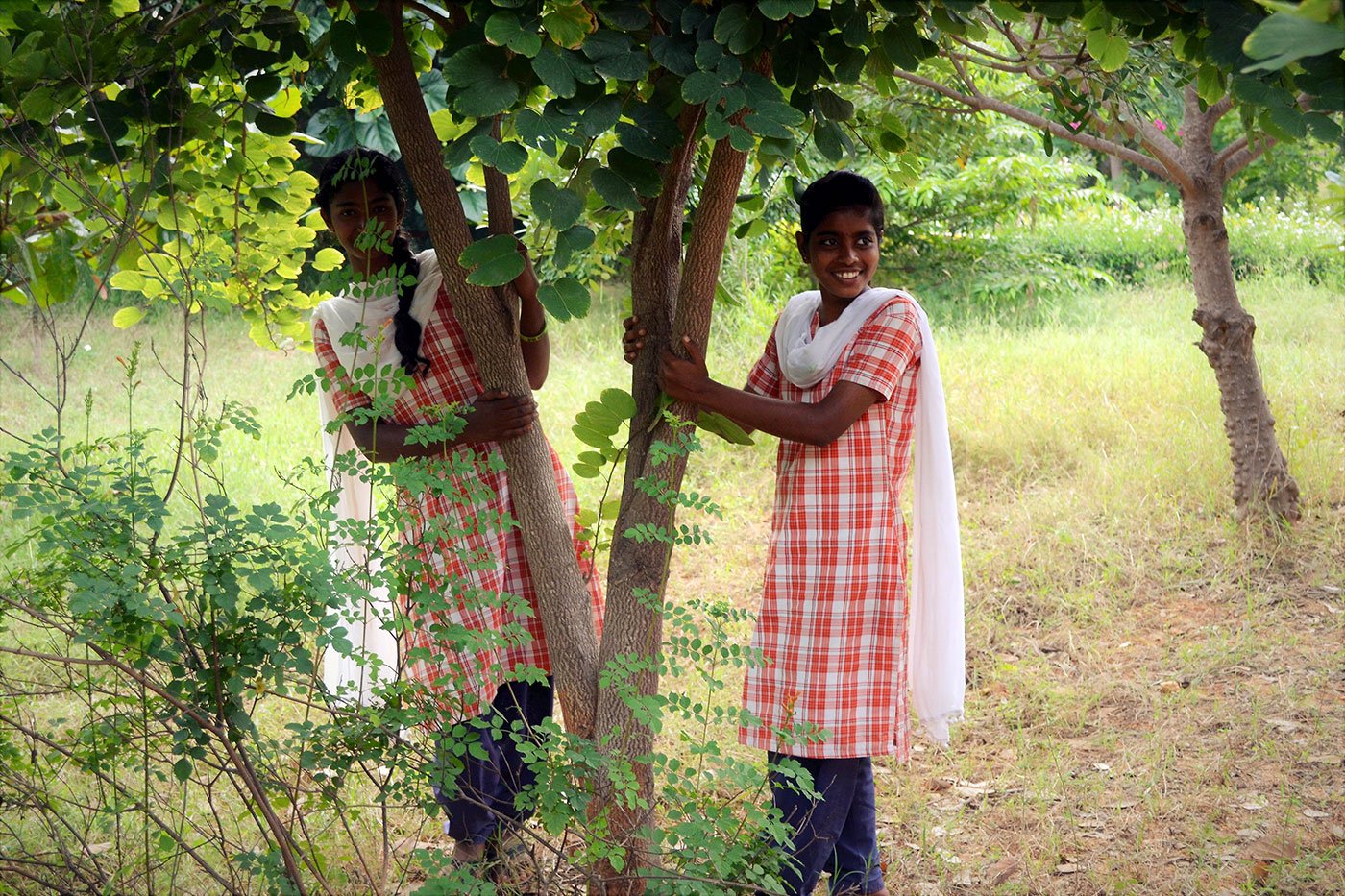 ‘Model’ parliaments of students are common, but the one at Snehagram, in Tamil Nadu’s Krishnagiri district, is not. Its teenaged members run a round-the-year government under irreversibly tragic conditions

“The girls grow vegetables that feed us, but the boys – we do it to market the vegetables,” says Lakshmikanth Reddy.

He’s eloquent, confident and notably entrepreneurial. Traits he honed during his tenure as prime minister, head of opposition and, currently, as minister of health.

That Lakshmikanth’s isn’t a household name is not surprising. He is 17.

He and his fellow ministers are addressing an audience that has gathered to observe the success of their parliament.

Unlike the model United Nations simulation that many elite schools conduct, this body needs its members to assemble more than just once a year.  Here, they do not discuss foreign policy in formal dress, nor suggest lofty solutions to the world’s weighty problems. Instead, as heads of various ministries such as education and health, they make decisions that drive their everyday lives. All this with one important clause – least interference from adults.

These ministers do not live on prime real estate in New Delhi. They reside in Nachikuppam village amid the hills of Veppanapalli taluk of Tamil Nadu’s Krishnagiri district. And unlike their official counterparts, they never make the news. 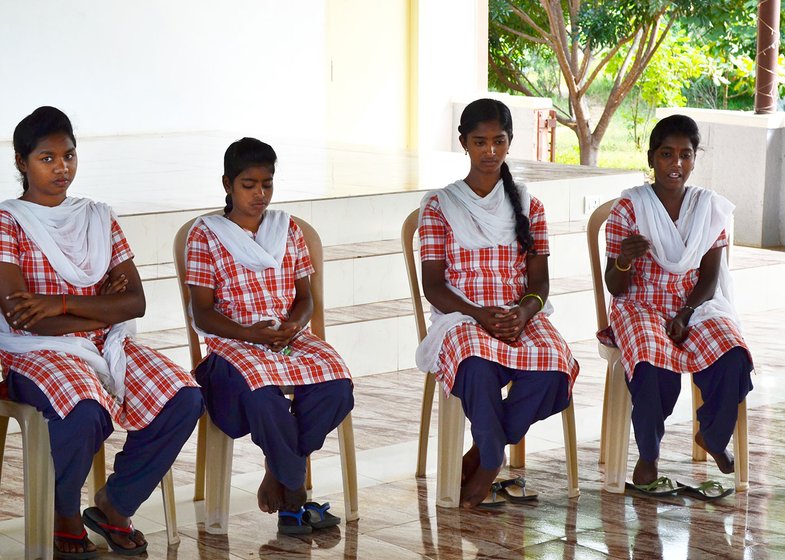 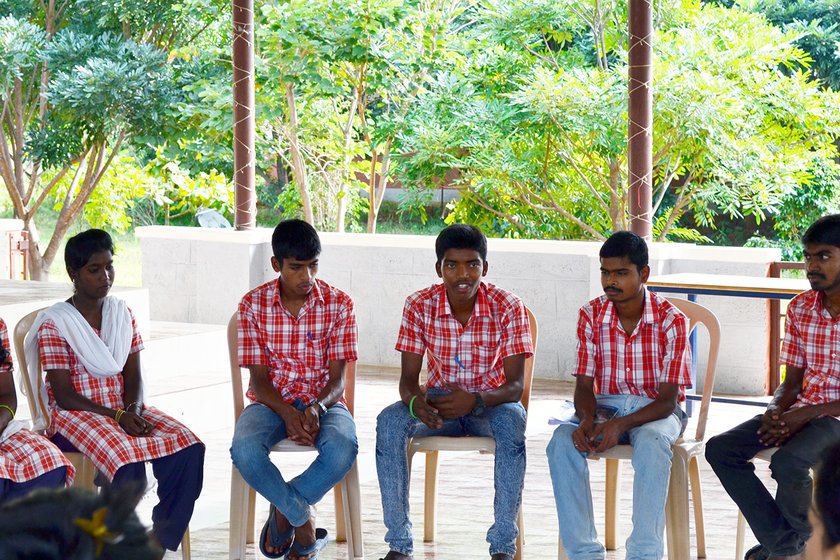 Child parliaments are common in this part of the country. And as a reporter you worry that stories on them end up being a little too cute. What makes this one unique, though, is that all its members are HIV-positive. Their self-regulated, teenaged parliament is in Snehagram, a vocational training and rehabilitation centre that is also their home.

The 2017 UNAIDS report shows that 80,000 people were diagnosed with HIV in India in 2016, down from 1.5 lakhs in 2005. The national anti-AIDS campaign launched in 2004, which ensured free treatment, is largely credited with that fall.

“The number of newly infected HIV patients has come down over the last decade,” says Dr. G.D Ravindran, a professor of medicine at St. Johns Medical College, Bengaluru. That has happened with "the coming of the antiretroviral therapy [ART] and awareness programmes held across the country. Studies suggest that ART helps prevent the transmission from mother to child, which explains the fall in numbers,” he says. Dr. Ravindran has been interacting with HIV patients since 1989 and is one of the founding members of the AIDS Society of India .

The treatment has major implications for HIV-positive children, says Father Mathew Perumpil, a trained counsellor and the director of Snehagram. They were “a group we never expected to see grow into teenagers, much less reach adulthood. The introduction of ART meant patients could survive – and thrive.”

Except, how do you thrive in the face of vicious social stigma?

Snehagram was set up in 2002 to give HIV-impacted children a comfortable life until their premature death. However, as ART began to succeed, the founders had to ensure their wards were equipped with skills for a career. The medication's success prompted them to make this a vocational institute as well. 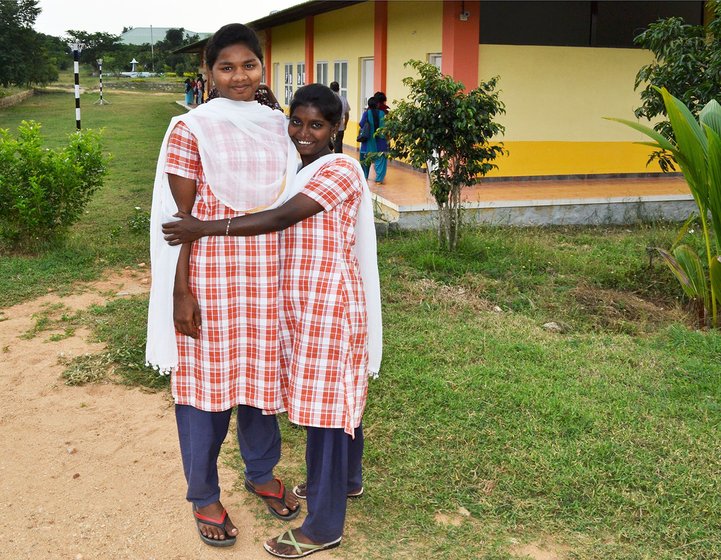 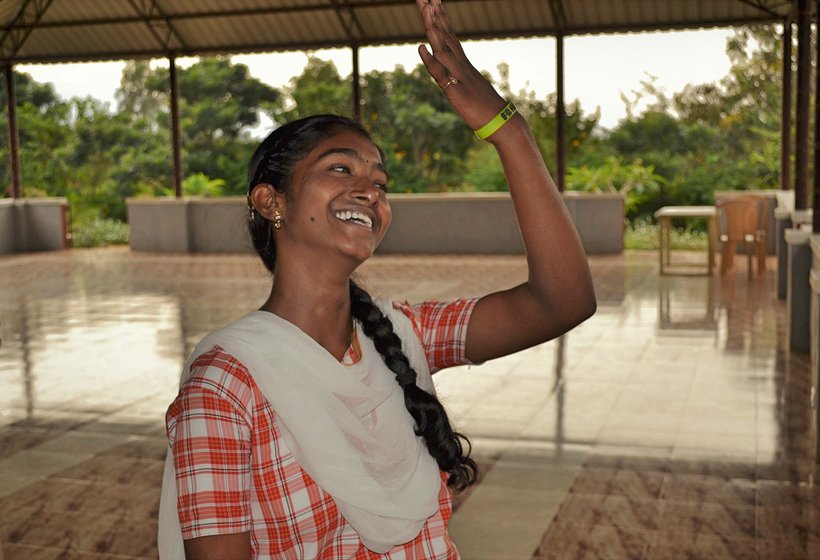 Meena Nagaraj (extreme left), Sruthi Sanjukumar (left) and Ambika Ramesh (right), orphans from poor families in rural Tamil Nadu, Karnataka and Andhra Pradesh, have been able to improve their English by participating in the parliament

The youngsters here are completing their secondary and higher secondary education under the National Institute of Open Schooling. Their's will be the first batch to graduate once they finish Class 12. The institute hopes they will then be able to get jobs.

Meanwhile, outside of the classroom, they’re taught organic and dairy farming, hydroponics and cooking, among other skills. But teaching is just one way for kids to learn. Here, they’ve also built a system where they make their own decisions and know their rights. Which is what Snehagram’s mini parliament is about – fostering a sense of self-reliance.

The children here are orphans from poor families in rural Tamil Nadu, Karnataka and Andhra Pradesh. Their fluency in English has grown with their parliament system.

“Our education minister at the time suggested we speak in English and not just in our local languages,” says Meena Nagaraj, 17. “You need to know English to get a good job, right?” She is the girls’ sports minister.

It’s Meena’s duty to make sure everyone wakes up early so they can pack in a workout before the long school day. Running kickstarts the routine, followed by a sport of their choice. A structured exercise regime that keeps up immunity is crucial to their well-being.

Speaking of crucial – one dose of antiretroviral medication must be taken every night to suppress the virus.  That’s all you need today – a single tablet that controls one of the most feared viruses in the world. The health ministers, Ambika Ramesh, 16, and Lakshmikanth, play a vital role in ensuring that all the 65 students take their medication every night. “Forgetting that tiny capsule is risky, but they do not slip,” says Mathew. 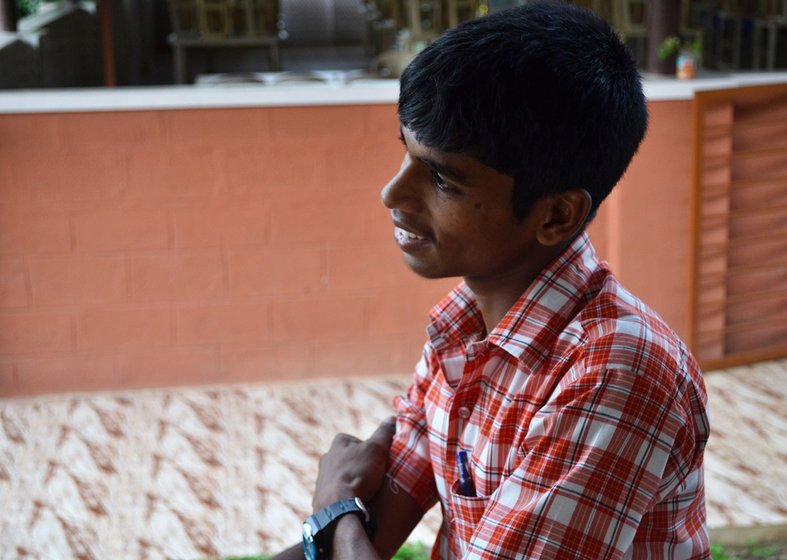 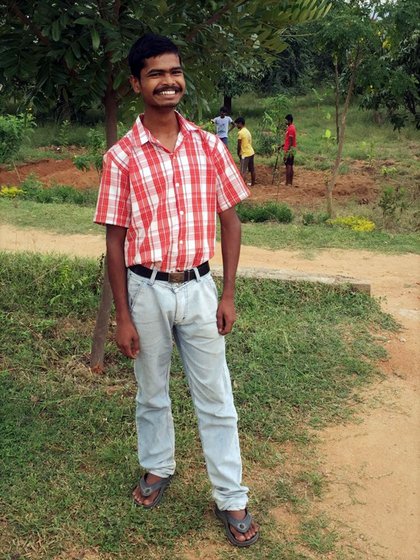 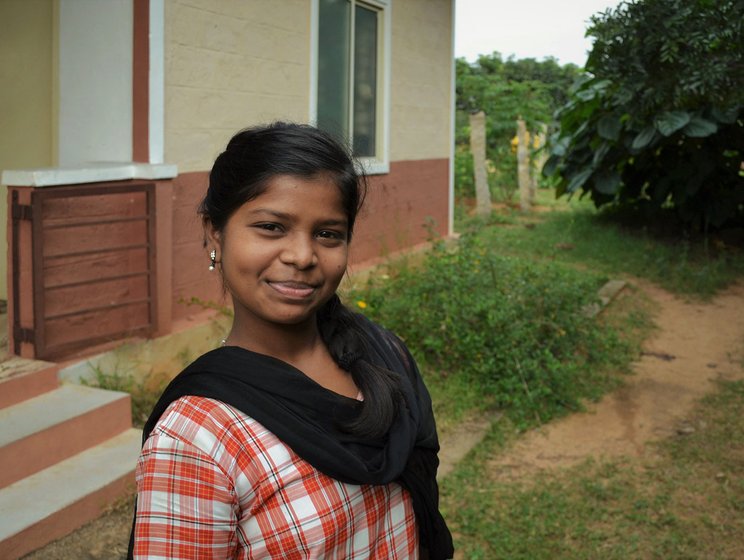 Modelled on the parliament at the Centre, Snehagram's parliament has inspired and been emulated by nine other schools. Seen here are Lakshmikanth Reddy (left), the health minister, Manik Prabhu (centre), the prime minister, and Pooja Annarao (right), the l aw and home minister

It’s a sound system. “We have a strong head of opposition who keeps us in check. Every fortnight the parliament meets and discusses the agenda. The opposition’s job is to make sure we do as pledged. Sometimes, we’re appreciated,” says Kaleshwar, 17, law and home minister.

What are they most proud of about their parliament? That nine other schools have been inspired to emulate their system.

Its structure mirrors that of India’s parliament. And their practice is serious. The environment minister ensures that all produce grown on this 17-acre campus is organic. And the boys do take it to town. They supply vegetables to a clientele of nearly 400 people and save the money from these sales.

Their vegetables also go into the food that the children are encouraged to cook once every week. Boys one week and girls the next, but both camps are quick to claim they are better at it than the other.

“Why don’t you come and taste our food?” asks Vanitha, 17, the deputy prime minister. “This Sunday, it’s our turn to cook.”

“Then I suggest you give this Sunday a miss,” says a cheeky Lakshmikanth.

That banter is a relief in a wider society where HIV jokes and ignorance of the virus are the norm.

“Many people will not eat here when they come to visit the kids.  ‘We are fasting today’ – even educated people say things like that,” observes Mathew.

So, are these children, who are now so used to such an inclusive environment, aware of the stigma?

“Oh yes. They are very aware. Only a couple of their close relatives might know of their condition and they don’t talk about it to the others.” If it gets known “they are not given the same plate to eat on, back home,” says Mathew.  ‘’It’s a mindset. The discrimination can be obvious or subtle, as it is with caste.” 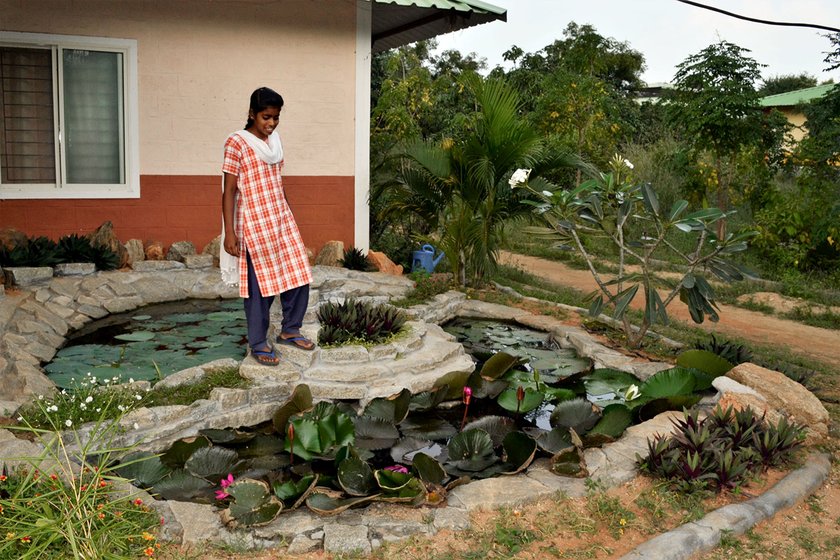 Throughout the day, I rarely see Manik Prabhu, the prime minister, break his smile. I am guessing his genial disposition may have helped him get the votes for the top job.

He’s also an athlete, whose talent has taken him far and wide. To the famous Boston Marathon, to one in the Netherlands and closer home, to Colombo, Sri Lanka.

“HIV isn’t a full stop and I want to be a source of hope for others with the disease,” he says.

My learning for the day: Yes, Manik and his friends have HIV – but HIV doesn’t have them.