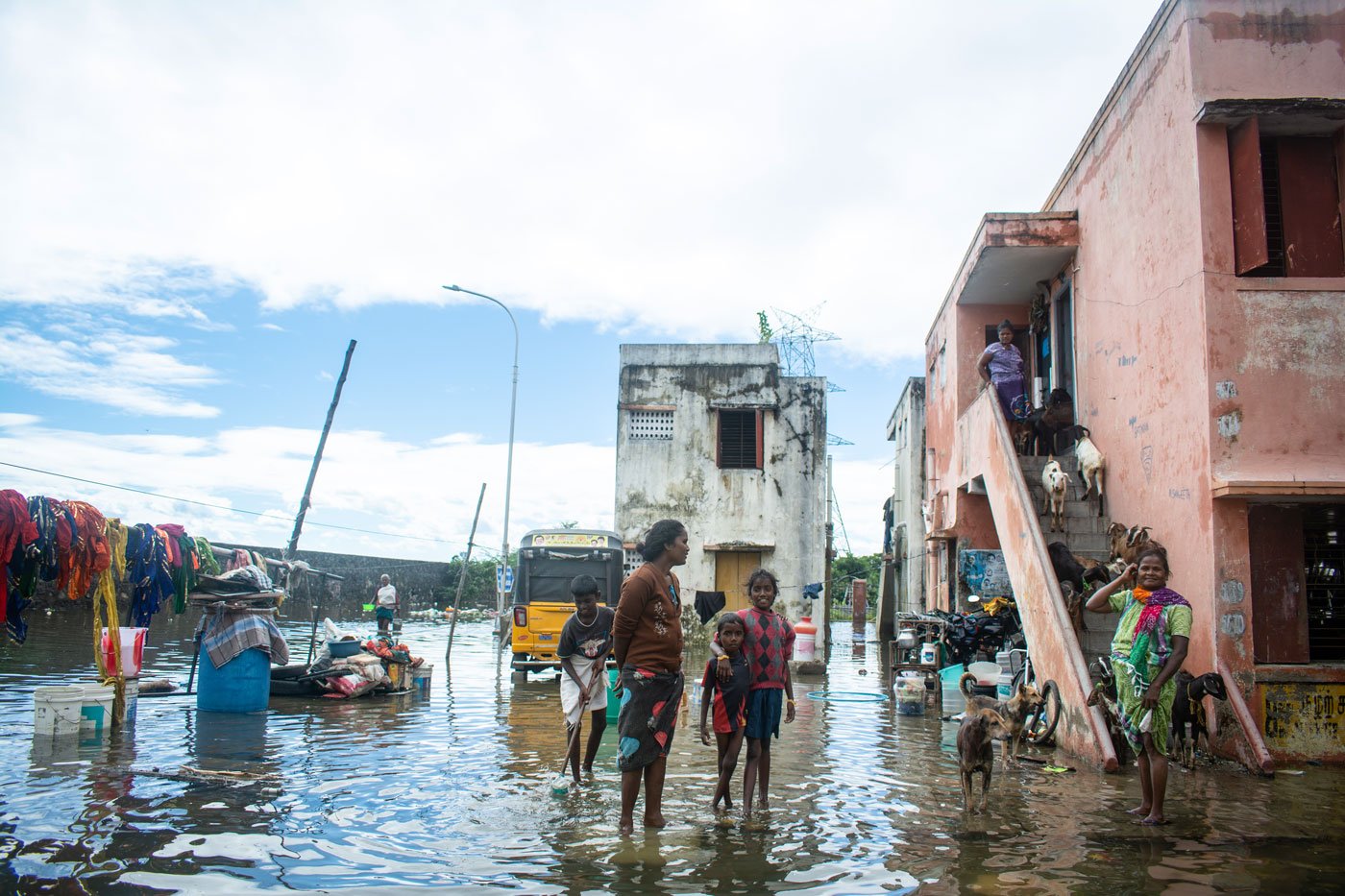 In Semmanjeri: 'We get a tsunami every year'

When Cyclone Nivar hit Tamil Nadu on November 25-26, Semmanjeri got flooded too – but that's a regular occurrence for the people relocated to this low-income area to make way for ‘development’ projects

“Don’t give us food packets, we can buy rice from the ration shop. Find a solution for the flood waters!” said the women gathered in a group in Semmanjeri.

That area, 30 kilometres south of Chennai city, on the Old Mahabalipuram Road, in Kancheepuram district, was severely flooded on November 25, 2020.

The submergence was neither new nor unusual for the residents of this low-lying locality. In 2015, when Chennai went under water in a historic and notoriously mismanaged flood, so did Semmanjeri. But in some neighbourhoods at least, the streets and storm water drains seemed to be somewhat better prepared in the following years.

Not in the Semmanjeri (or Semmancheri ) housing board localities – neglected perhaps because they are home to families displaced due to various urban ‘development’ and infrastructure projects, over time. Many of the residents here are  domestic workers in Chennai city, sanitation workers, autorickshaw drivers, or doing other jobs in the informal sector.

So when Cyclone Nivar, a beast of a storm, struck Tamil Nadu, depositing a high of around 250 mm of rain in Cuddalore and over 100 mm in Chennai during landfall, the rain water rushed inside the houses in Semmanjeri and stayed on the streets –  a foot indoors, two outdoors. 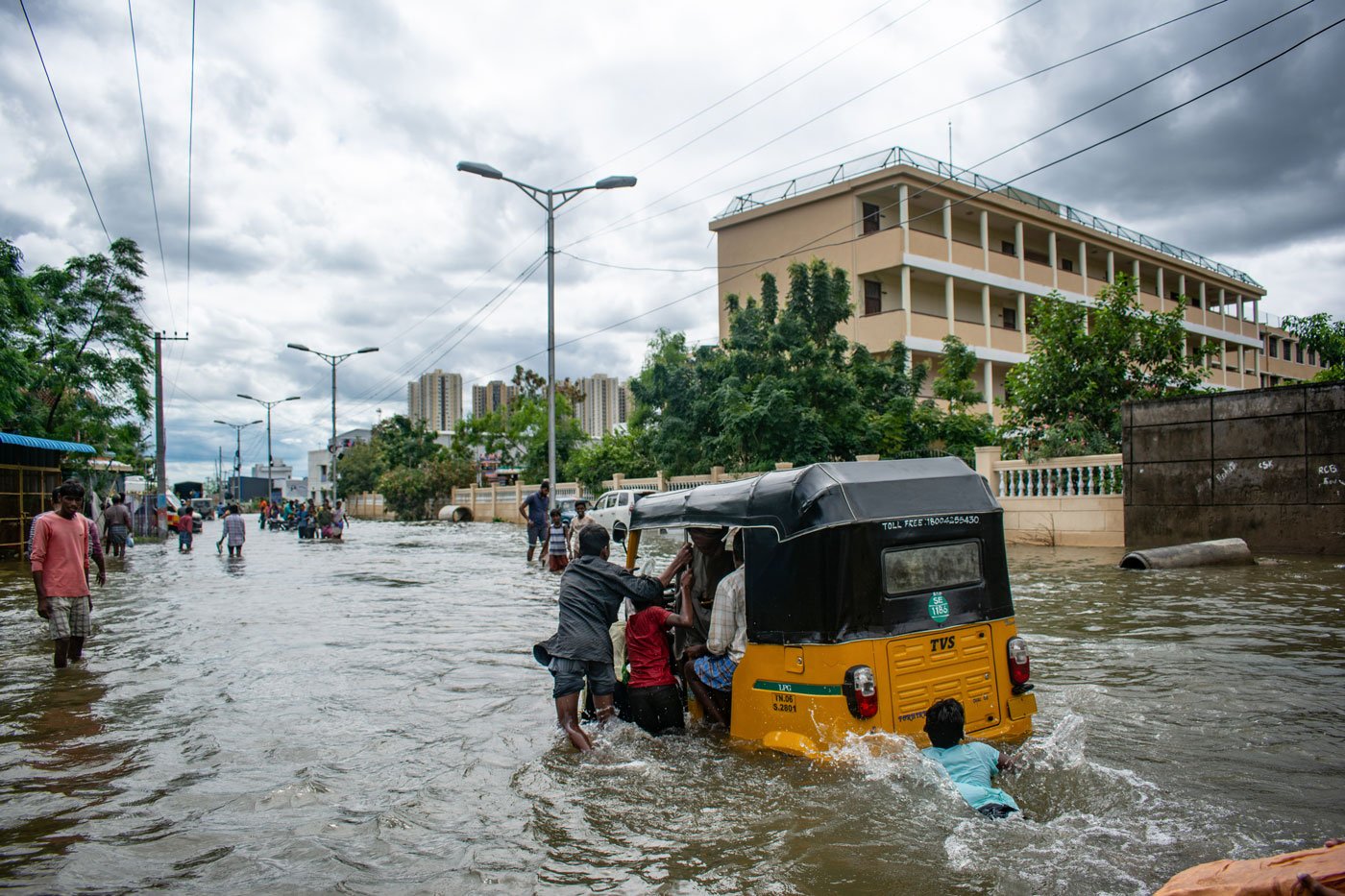 For the nearly 30,000 residents of Semmanjeri, it was a familiar sight – water that rushed into homes, destroying their personal belongings, shutting down the electricity supply for days, forcing them to stay with upstairs neighbours. Toilets were flooded, sewers overflowed; snakes and scorpions wandered indoors and the walls of homes crumbled.

Why did this happen? Not just because it’s a low-lying area. The problem is compounded by the newer high-rises, which further cut off already inadequate avenues of water drainage. Local lakes overflow too, reservoirs in the state release excess water – all of it adds to the recurring flooding. Plus the very high walls of the resettlement colonies that kept it all in – some nearly 10 feet tall – whose purpose, perhaps, was to make the low-income residents invisible from the outside.

So every time there is a big rain, the streets turn into rivers, vehicles float like boats. Kids bag fish with cloth nets right in the middle of the road, and their mothers spend the day emptying their houses of accumulated water, one futile five-litre bucket at a time.

“We get a tsunami here every year, and yet nobody visits us, except to ask for votes," the women said. "We moved here in 2005 from Foreshore Estate, Urur Kuppam and other areas in Chennai. Those who displaced us, the authorities and politicians, they live happily in maaligais [large houses]. Look at us!’

The women and kids all stood in foot-high water, asking for very little – a way for that water to drain out. 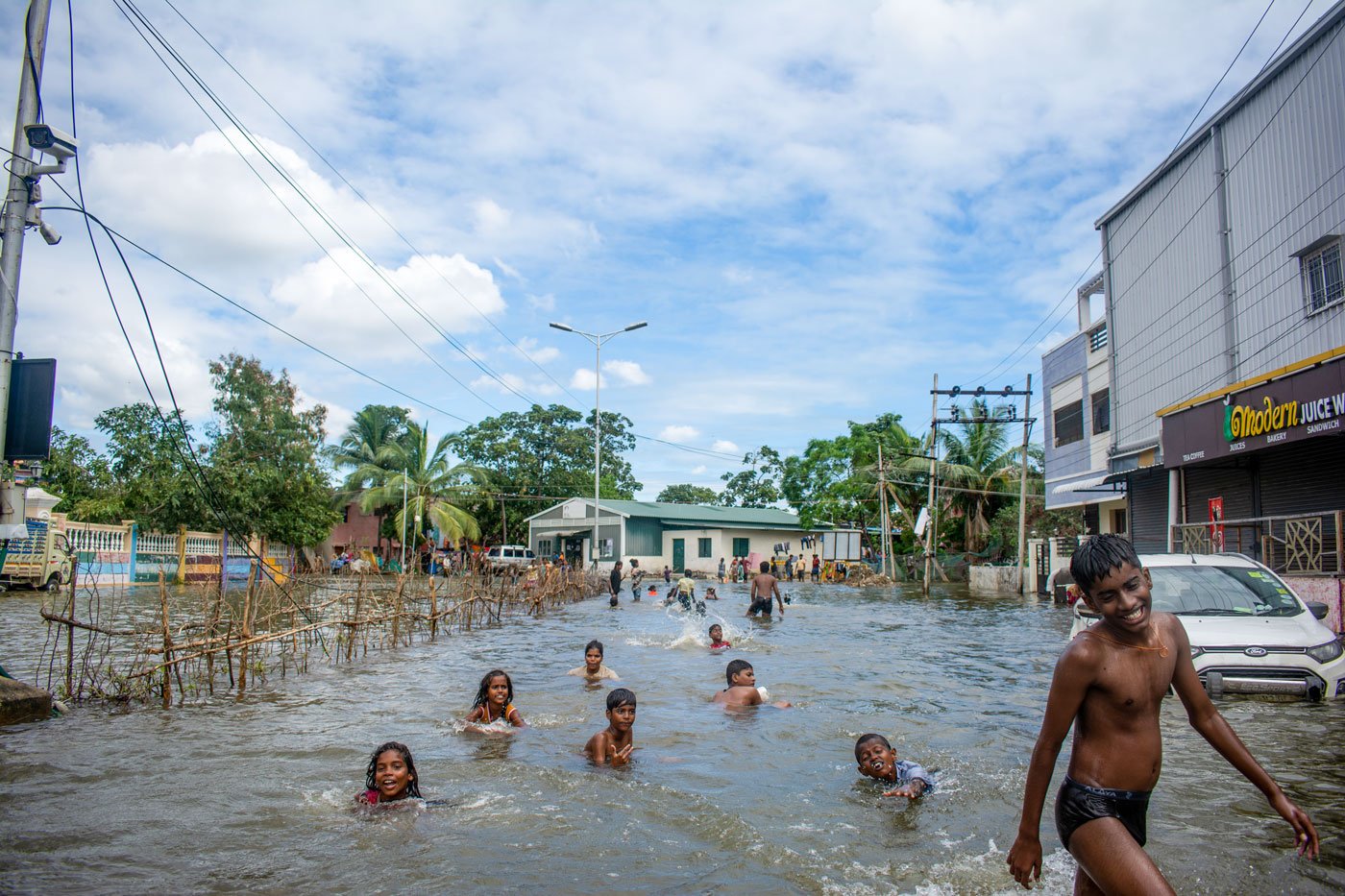 Every time there is a big rain, the streets here turn into rivers, and the kids run out to splash and wade and swim. 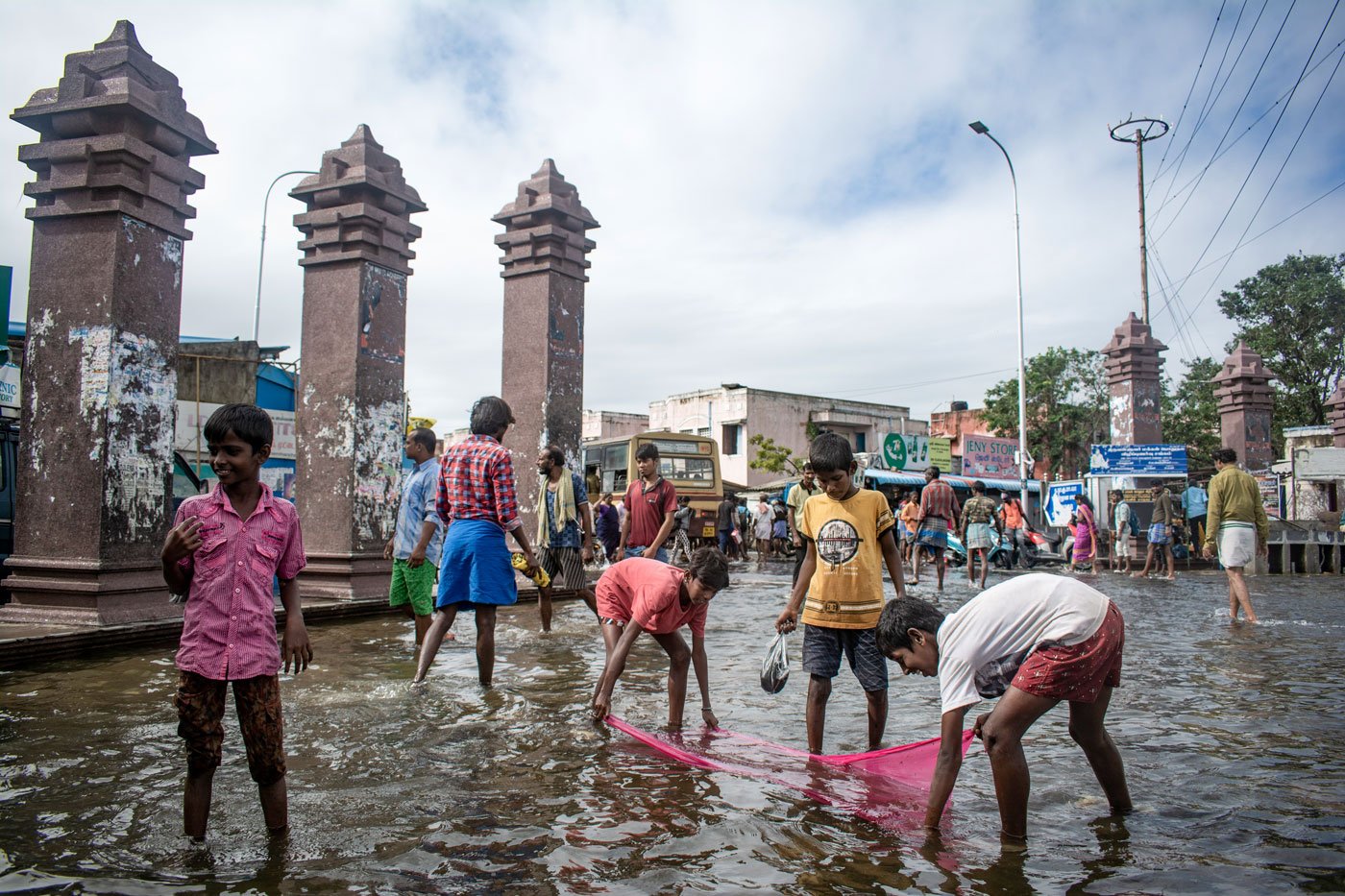 Or they bag fish with cloth nets right in the middle of the road – here, not far from the housing board quarters, the boys caught korava meen (murrel fish). 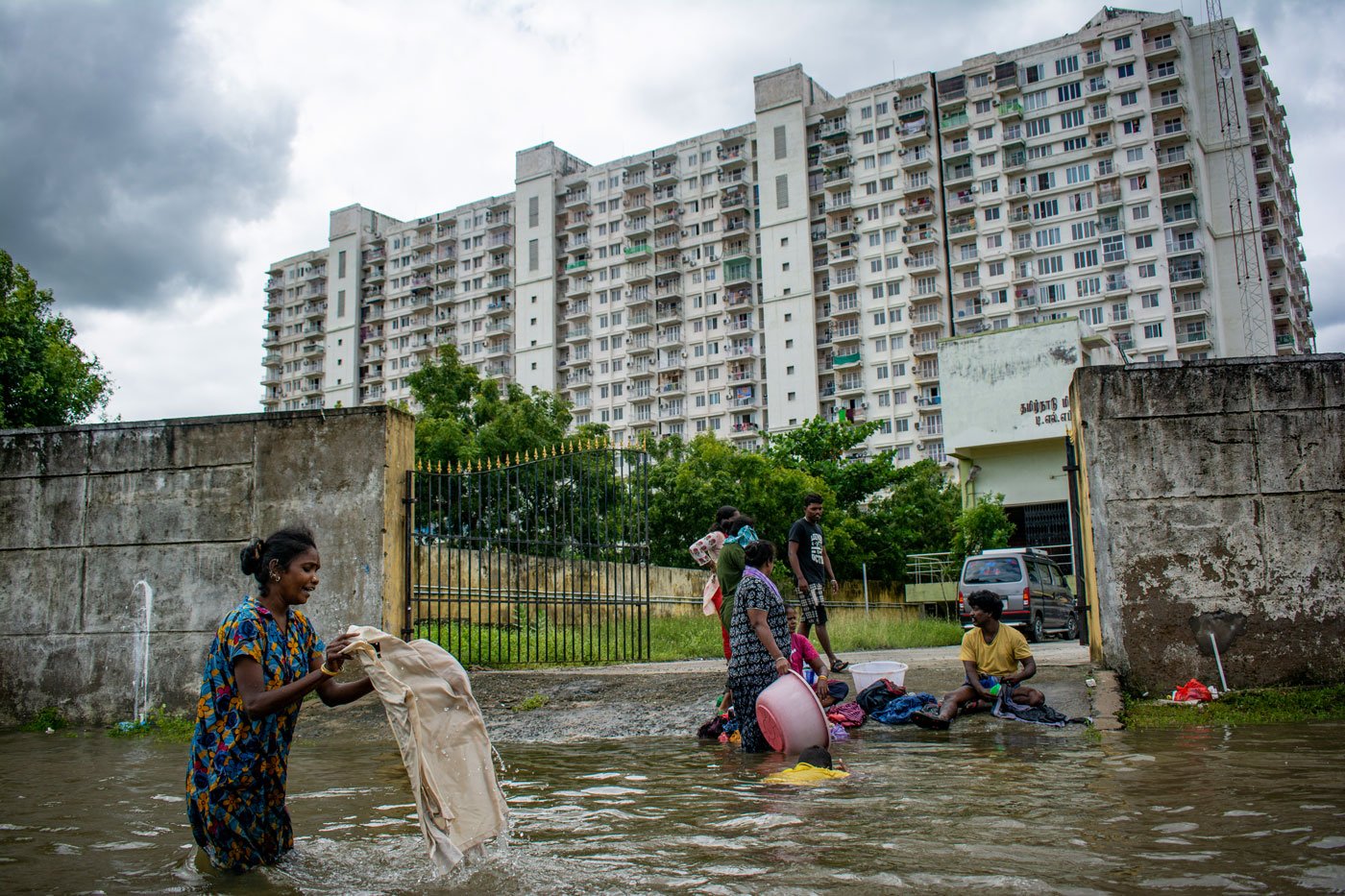 Whole families do their laundry in the middle of the road, in the flood water. The men help too, unable to go out and do wage work. 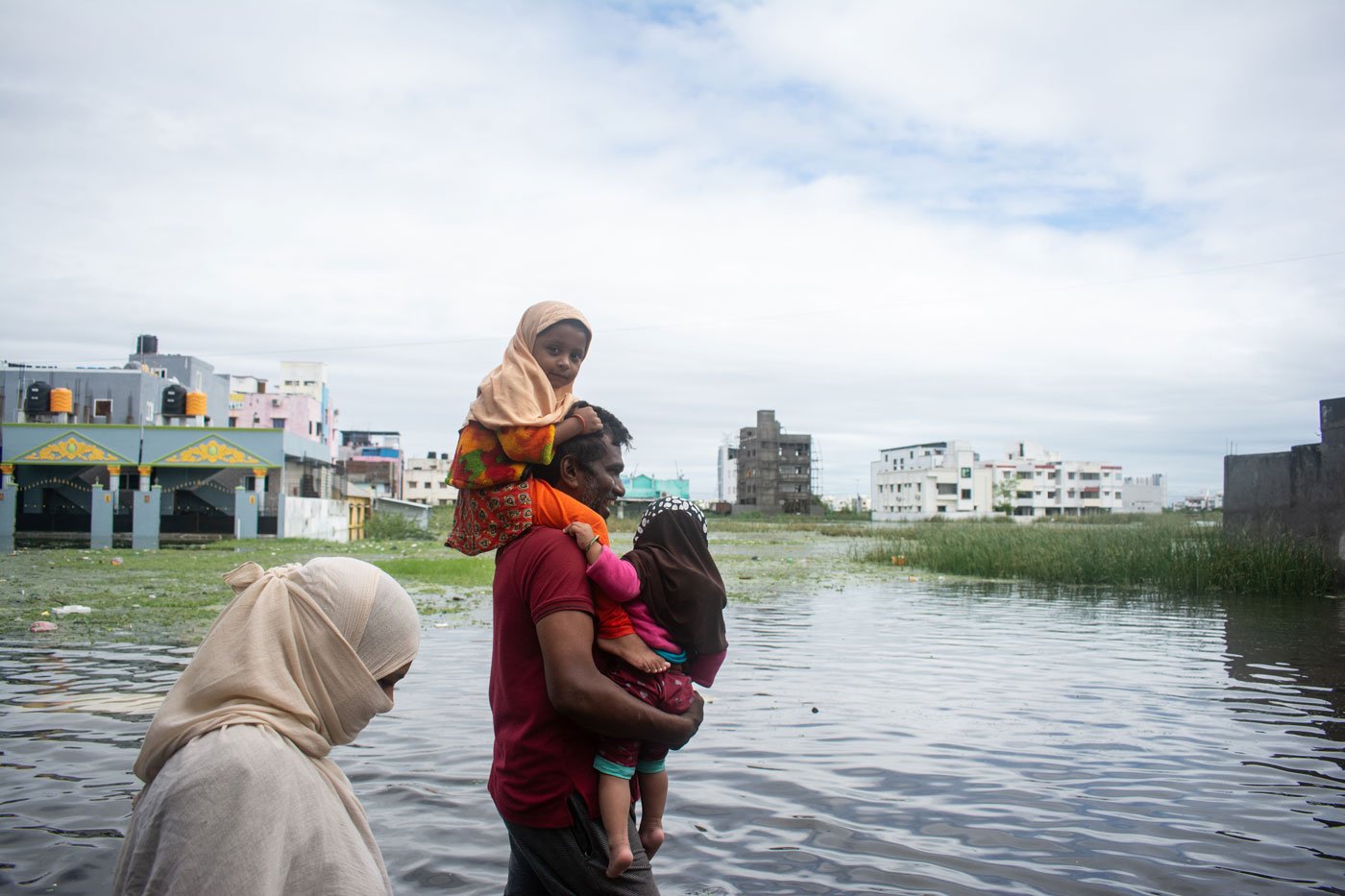 A family of four returns home, wading through the flood waters. 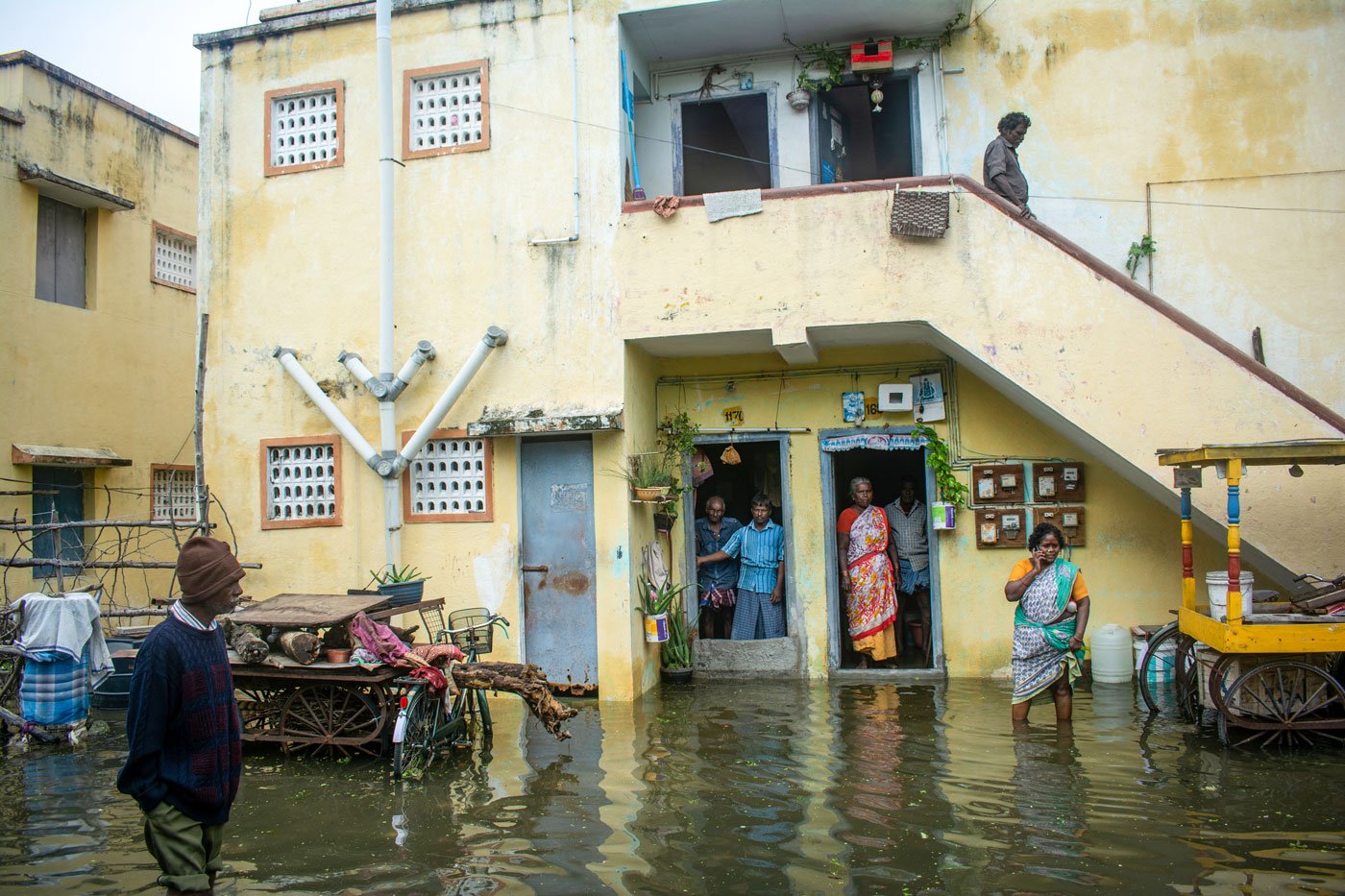 Trying to stay dry, a family (left) stands behind the short raised barrier at the threshold, hastily constructed when the storm was approaching. 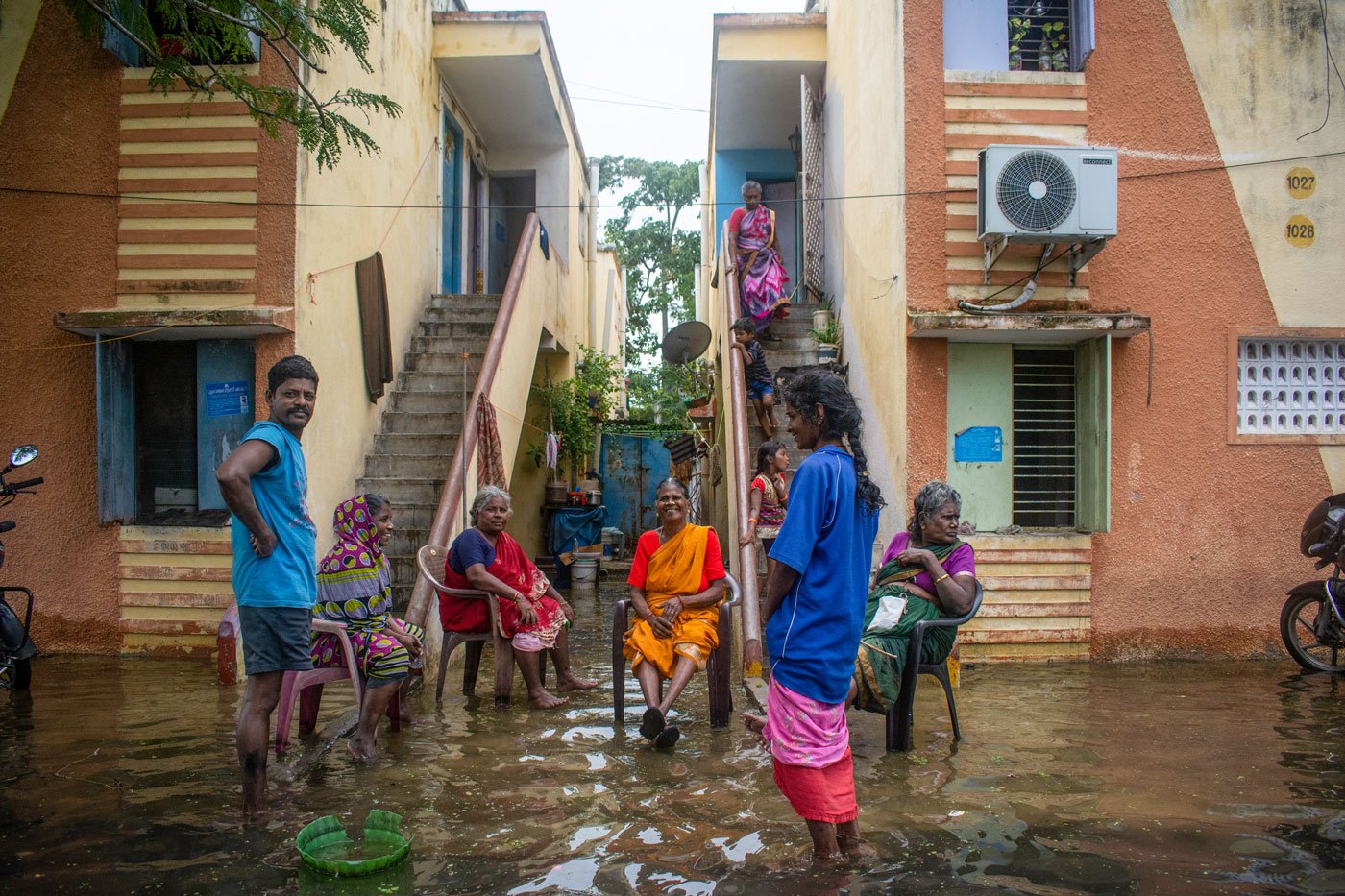 The elderly spend the day on plastic chairs, their houses awash with water. 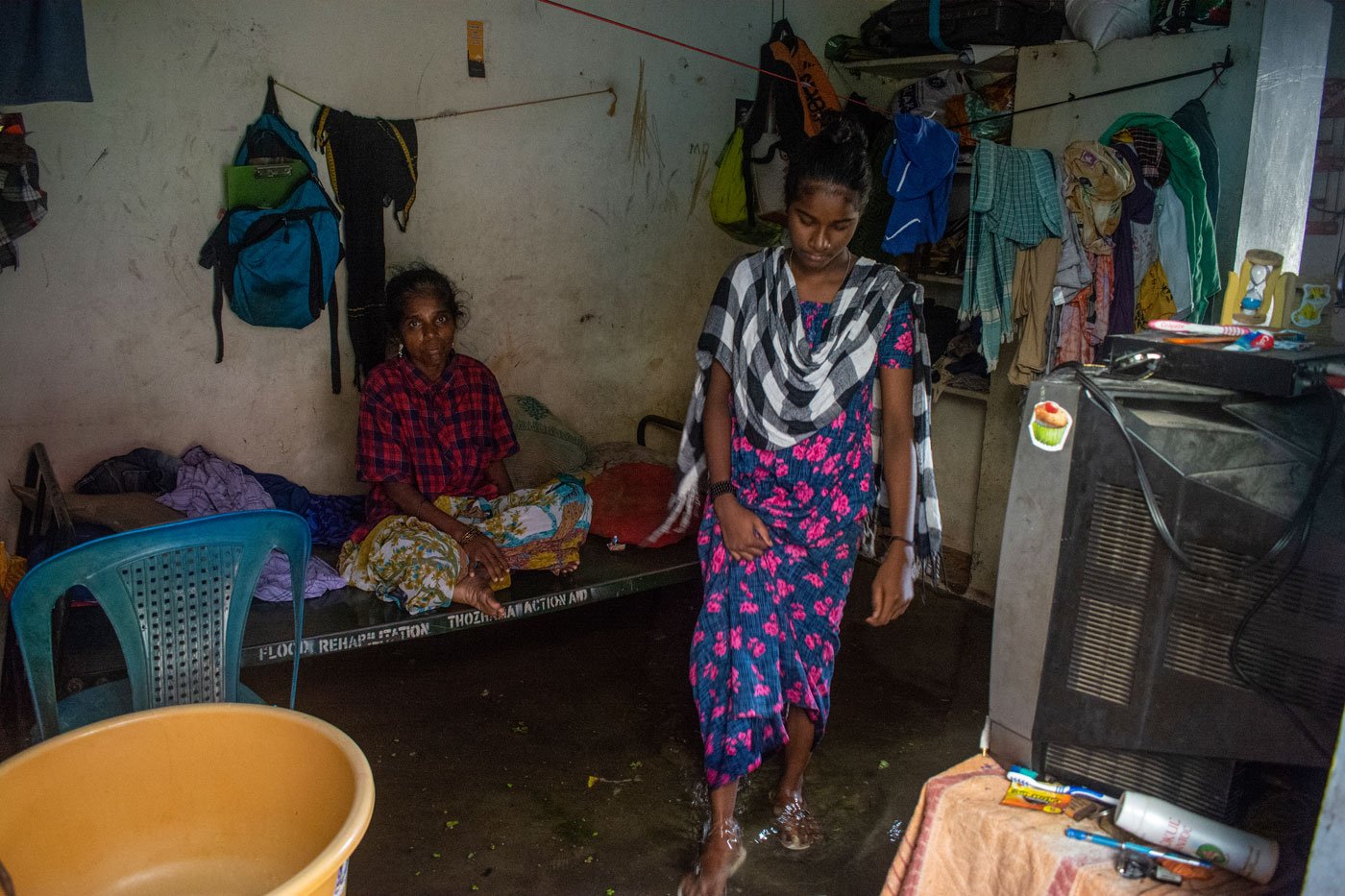 A young woman with a raging fever sits on an old cot with ‘flood rehabilitation’ painted on the iron frame. 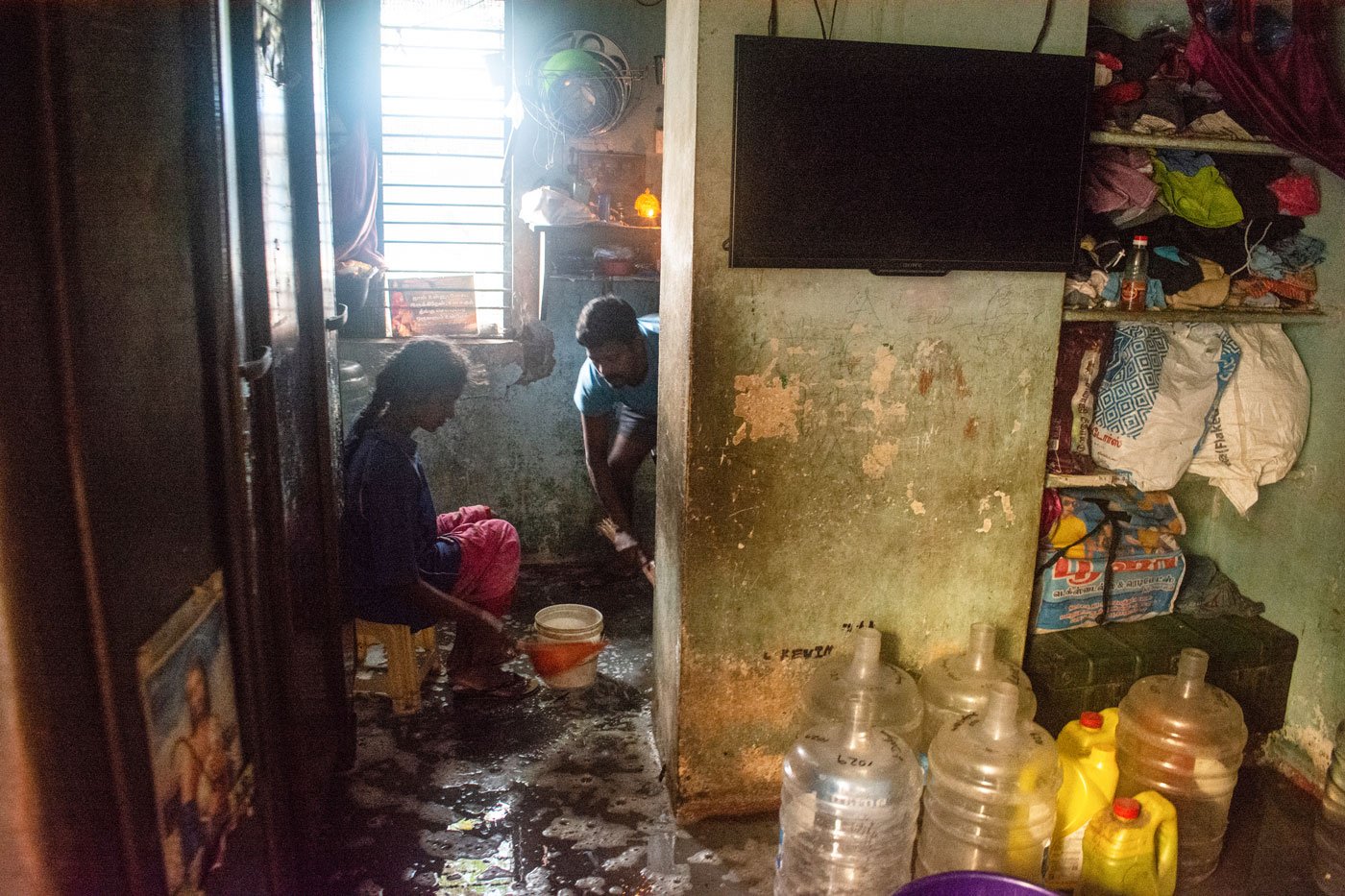 A family cleans out their home, as best as they can, with soap. The sewage mixed with the water has made it very smelly. 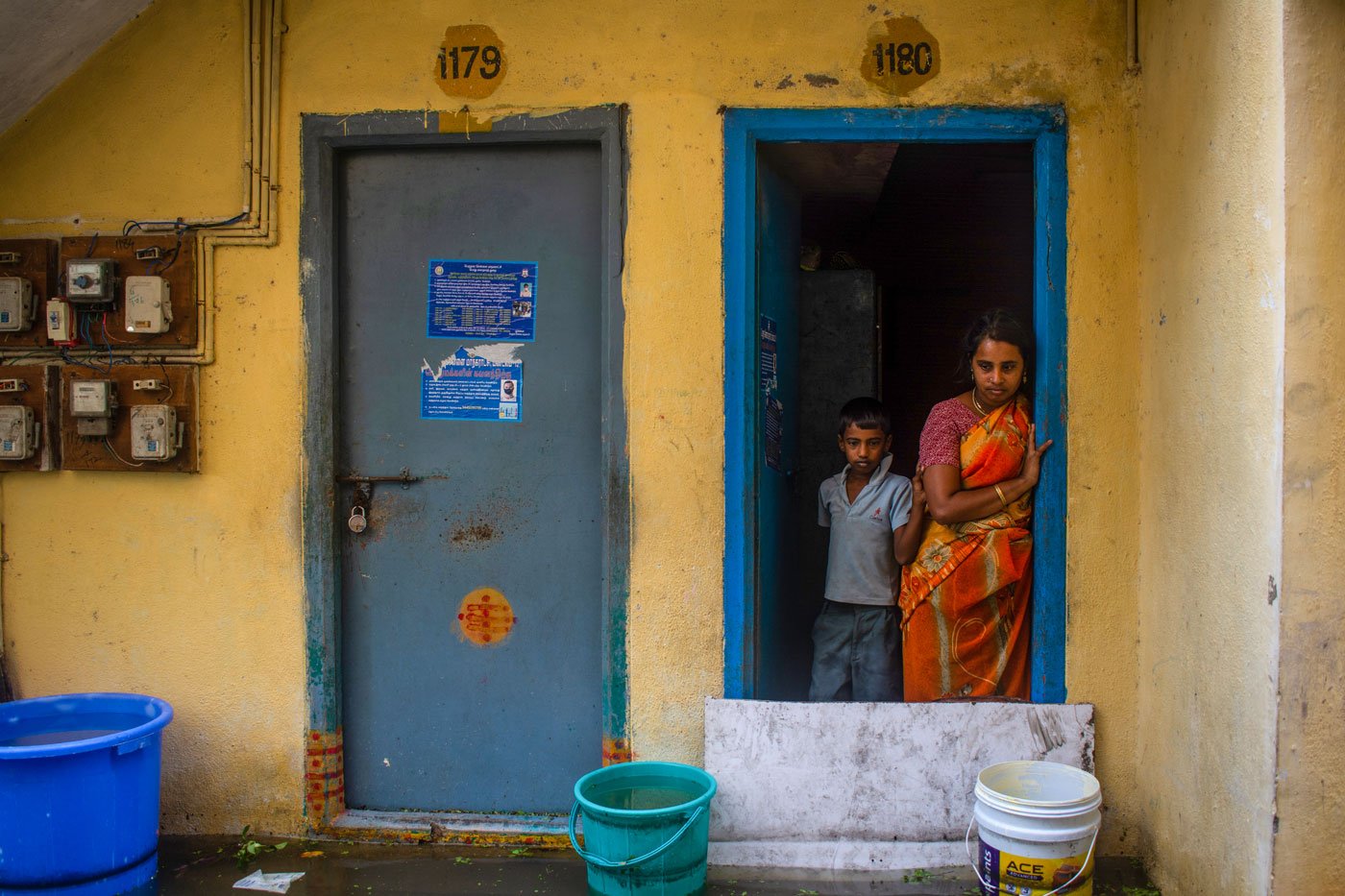 The women and kids all wait in the water, asking for very little – a way for that water to drain out. 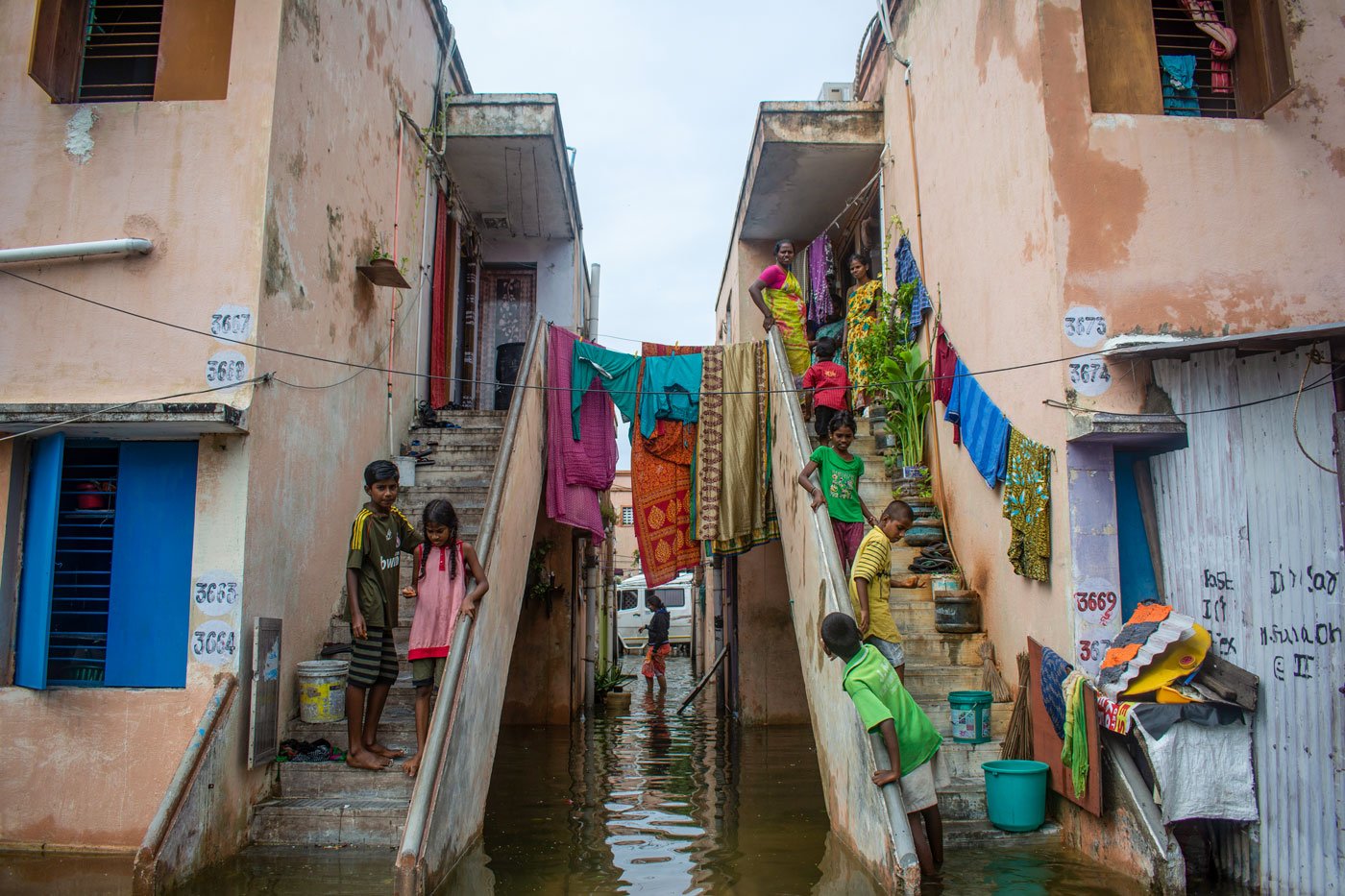 Residents struggle to dry clothes, hanging them between staircases and along the walls. 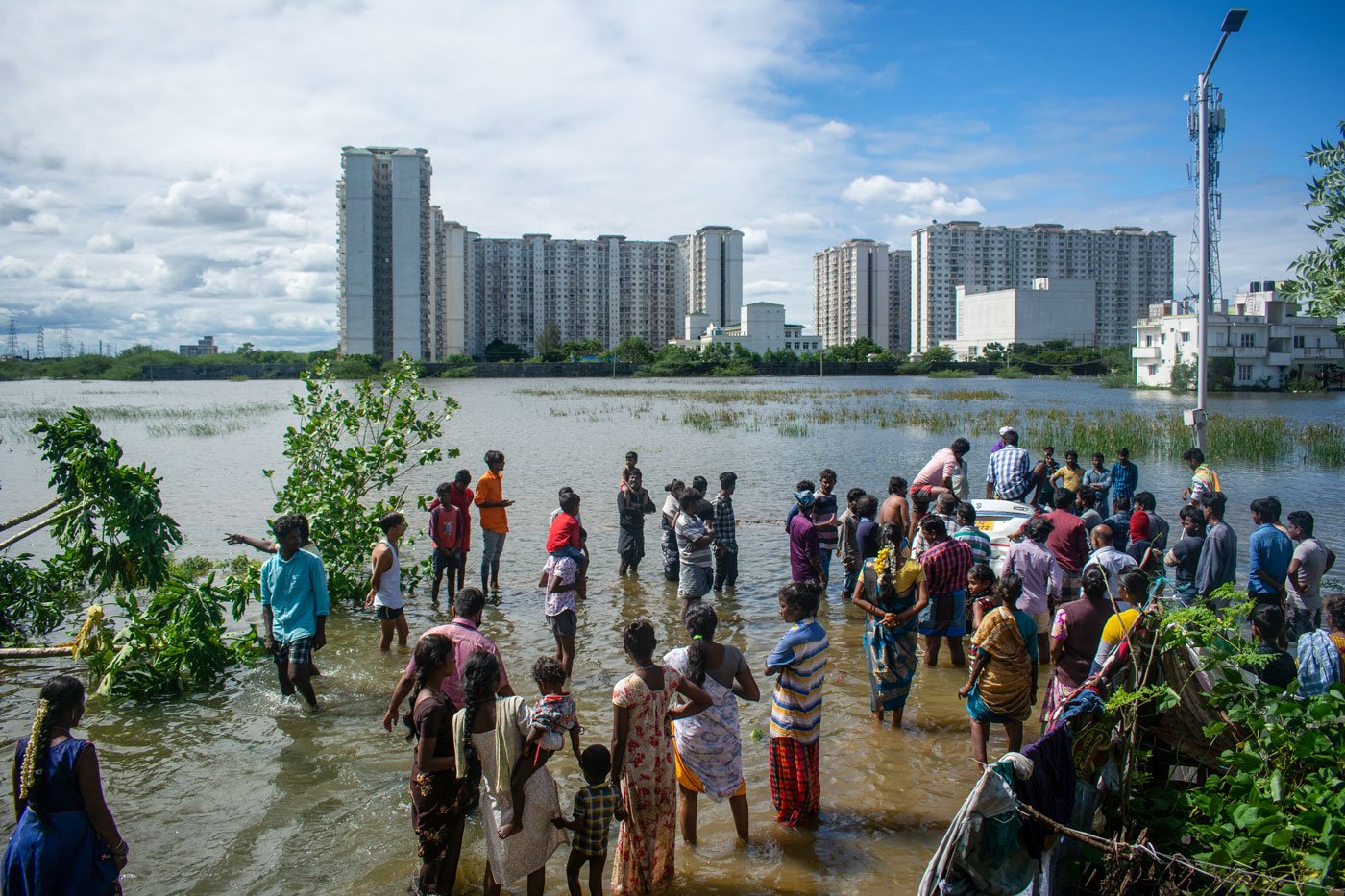 A car is fished out from the flood waters by the people of Semmanjeri. 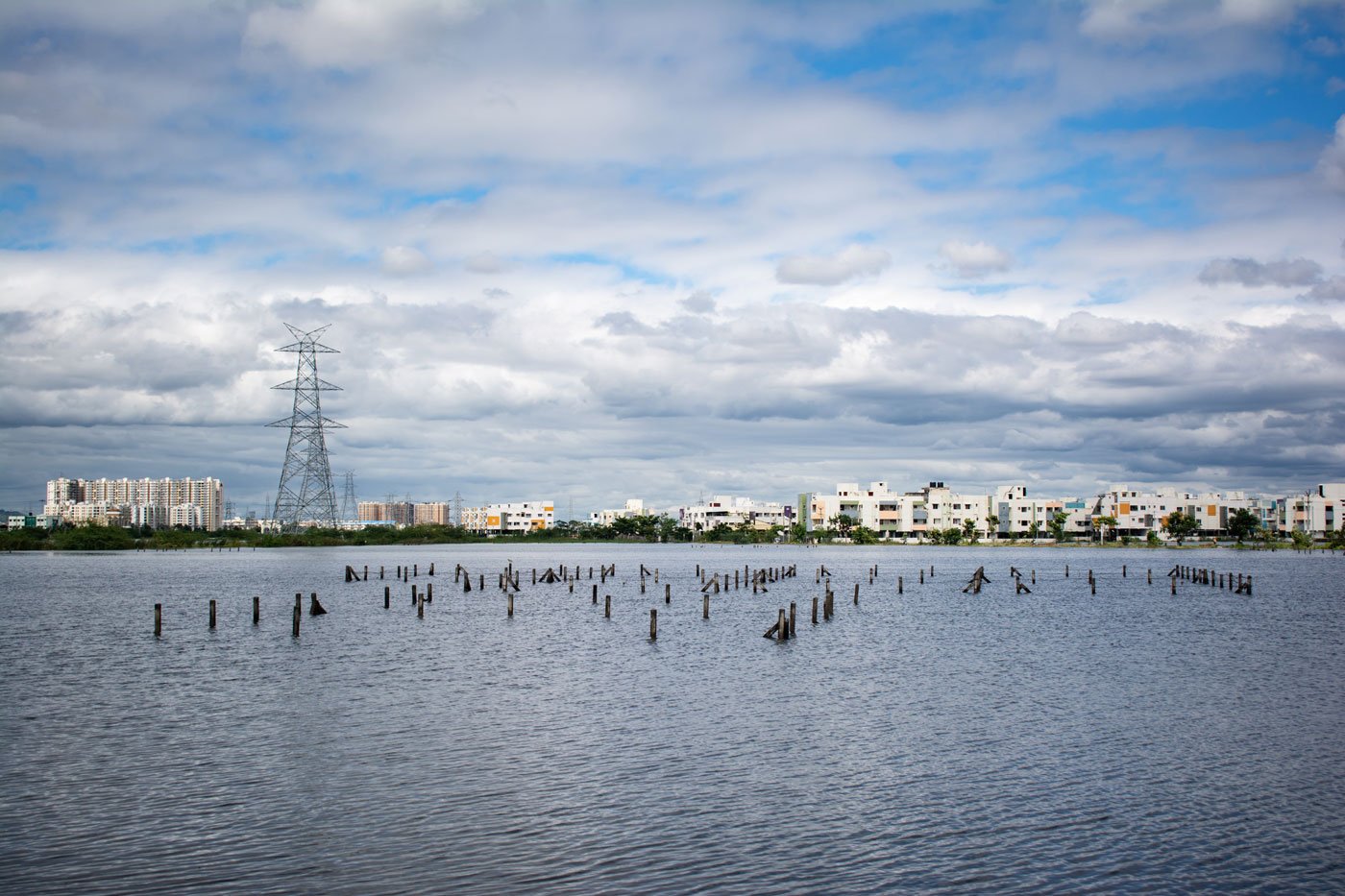 New plots that have been marked out have also gone underwater.