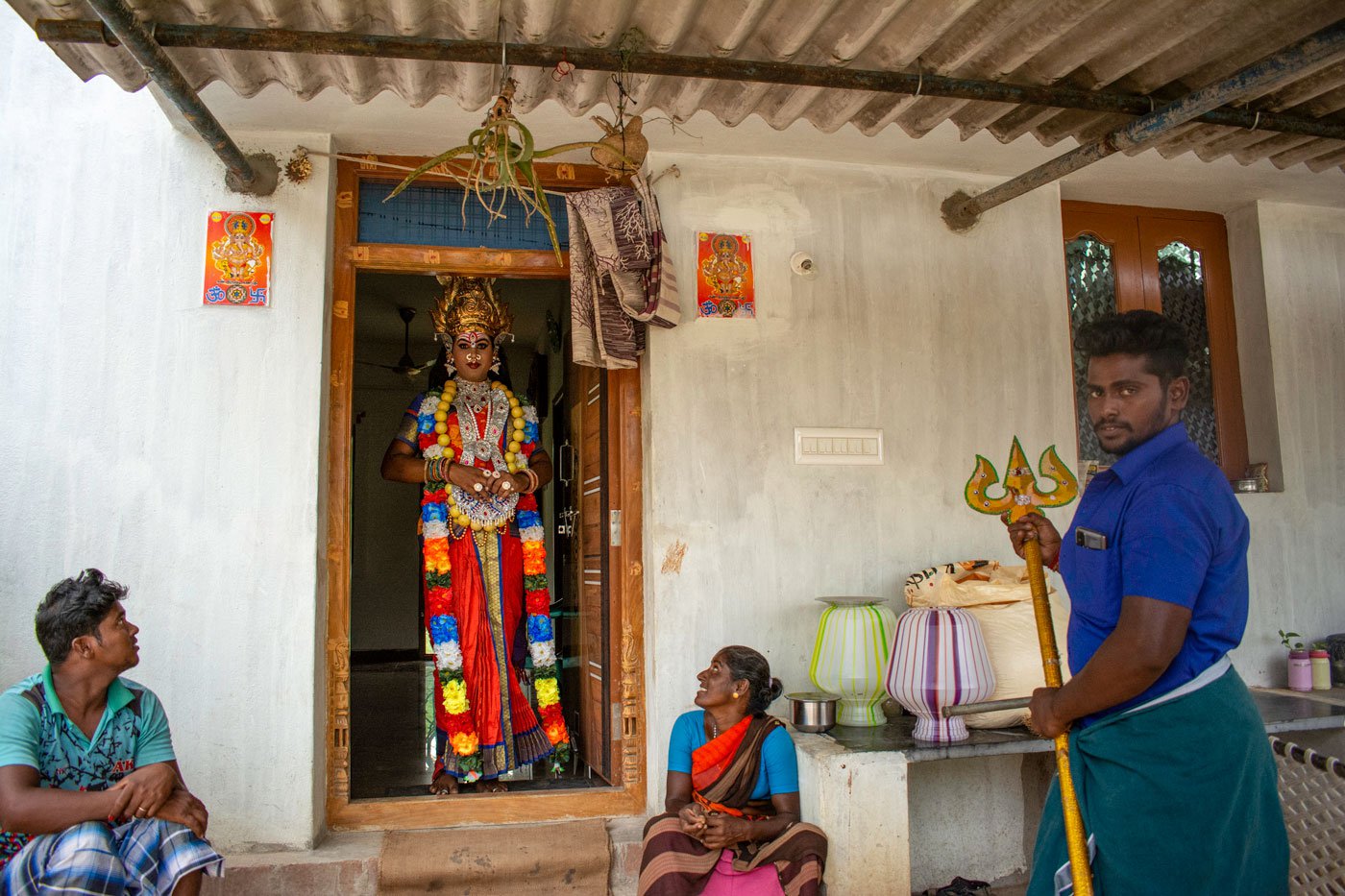 In Madurai: the trauma of trans folk artists

While the pandemic has devastated many folk artists across Tamil Nadu, trans women performers have been among the worst hit – with barely any work or income, and no access to aid or state benefits

“Our life is a gamble. Only god is aware of how we have managed these last two years,” says V. Tharma. “In my 47 years in folk art, it’s in these two years that we didn’t even have any means to eat.”

Tharma Amma, 60, is a trans woman folk artist who lives in Tamil Nadu’s Madurai city. “We do not have a fixed salary,” she adds. “And with this corona [pandemic] we lost even our few chances to earn a living.”

The first six months in a year are crucial for trans folk artists in Madurai district. During this period, villages organise local festivals and temples host cultural events. But during the lockdowns, the restrictions on large public gatherings have severely impacted trans women artists in the state. There are around 500 of them, estimates 60-year-old Tharma Amma (as people usually refer to her), who is secretary of the State Organisation for Trans Women in Drama and Folk Art.

Tharma Amma lives in a rented room near Madurai railway station along with a nephew, who works as a flower vendor, and his two children. Growing up in Madurai city – where her parents were daily wage labourers – she would watch other trans persons perform at temples and at festivals in nearby villages. 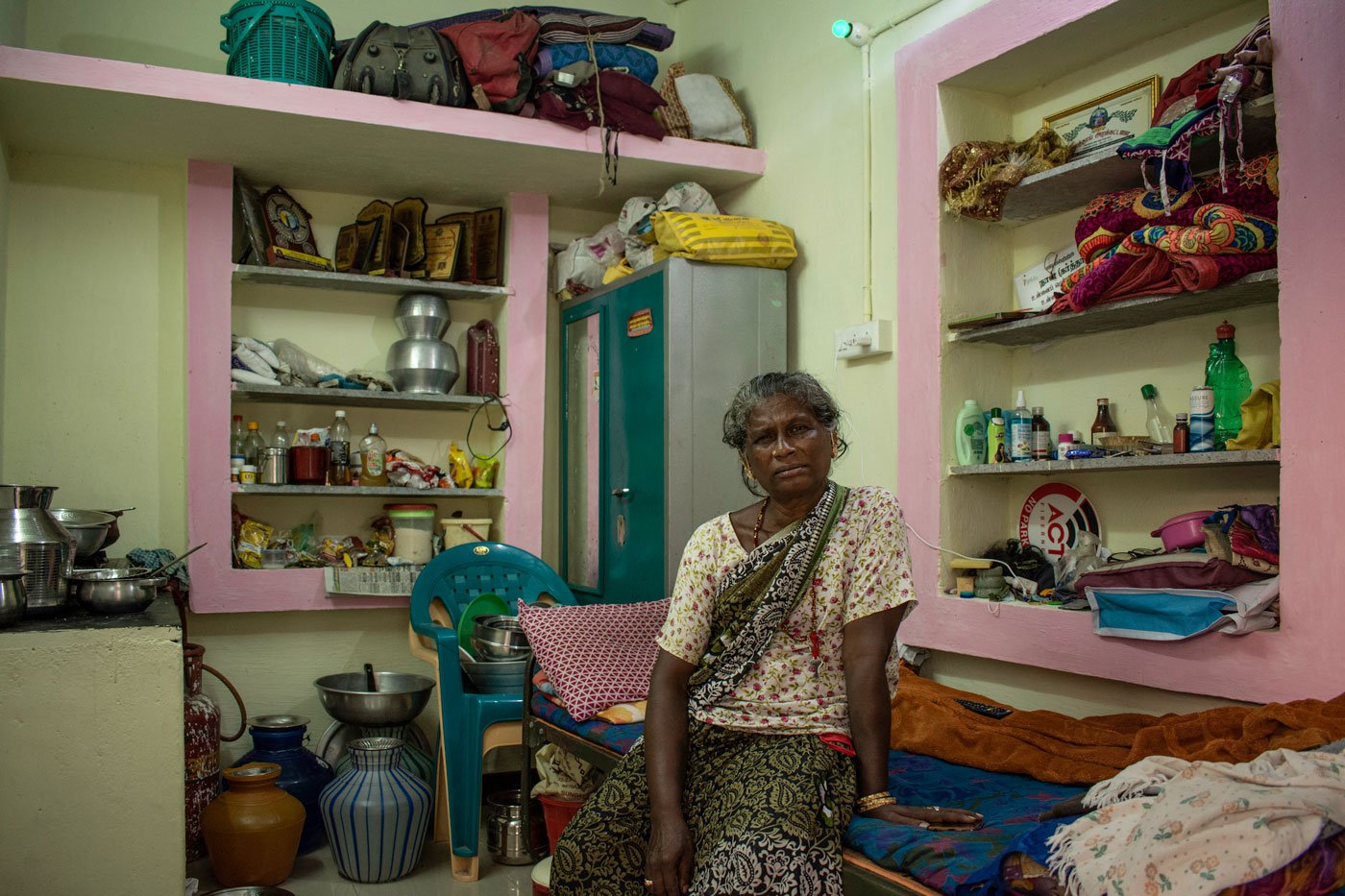 Tharma Amma at her room in Madurai: 'We do not have a fixed salary. And with this  corona [pandemic] we lost even our few chances to earn a living'

She began singing at the age of 14. “Rich people used to invite us to sing at funerals in their families,” says Tharma Amma. (She uses the Tamil term t hirunangai for transgender persons when referring to her community.) “We were paid to sing oppari [dirge] and for maradi paatu [chest-beating]. That was how I entered folk art.”

In those days, a group of four trans artists were paid Rs. 101. Tharma Amma continued to sometimes do this work till the lockdowns began in March 2020, by then earning Rs. 600 per person.

In the 1970s, she also learnt to sing taalattu (lullabies) and naatupura paatu (folk songs) from senior artists. And over time, learning the steps by watching performances, she began enacting the queen’s role in Raja Rani Attam, a traditional dance-drama performed in festivals in rural Tamil Nadu.

“In the 1970s in Madurai all the four characters [in this dance-drama] were performed by men dressed as king, queens and clown,” Tharma Amma recalls. She teamed up with three others and put up a show in a village for a first-ever all-trans women performance of Raja Rani Attam, she says. 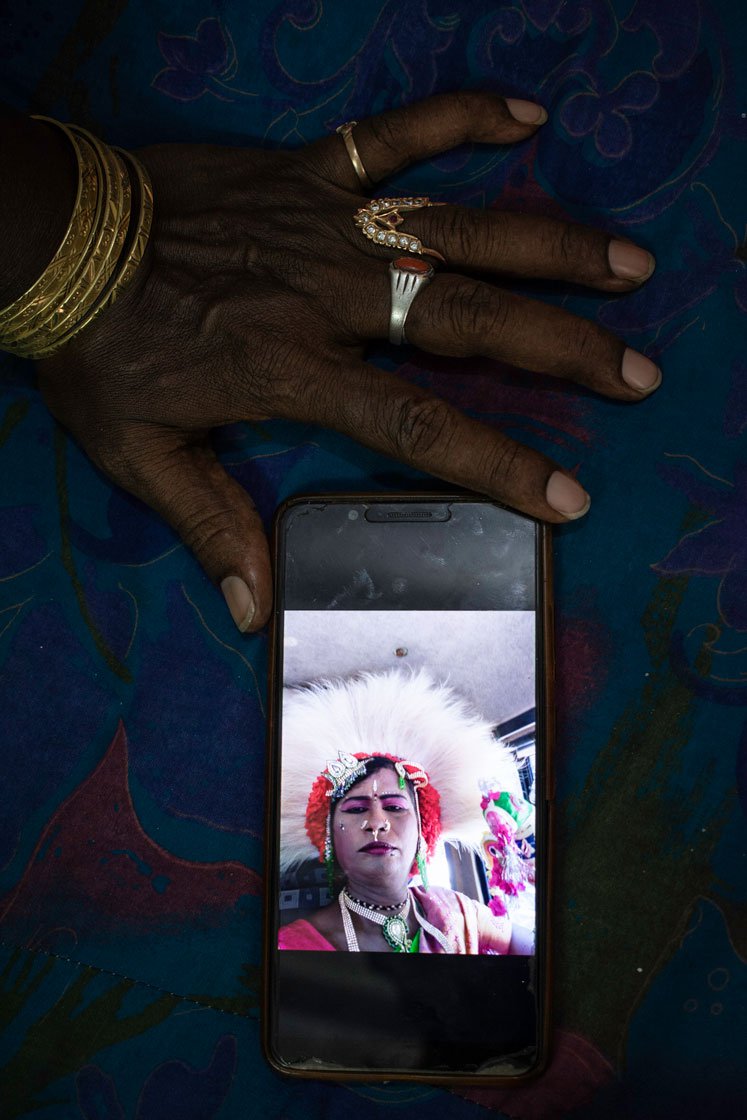 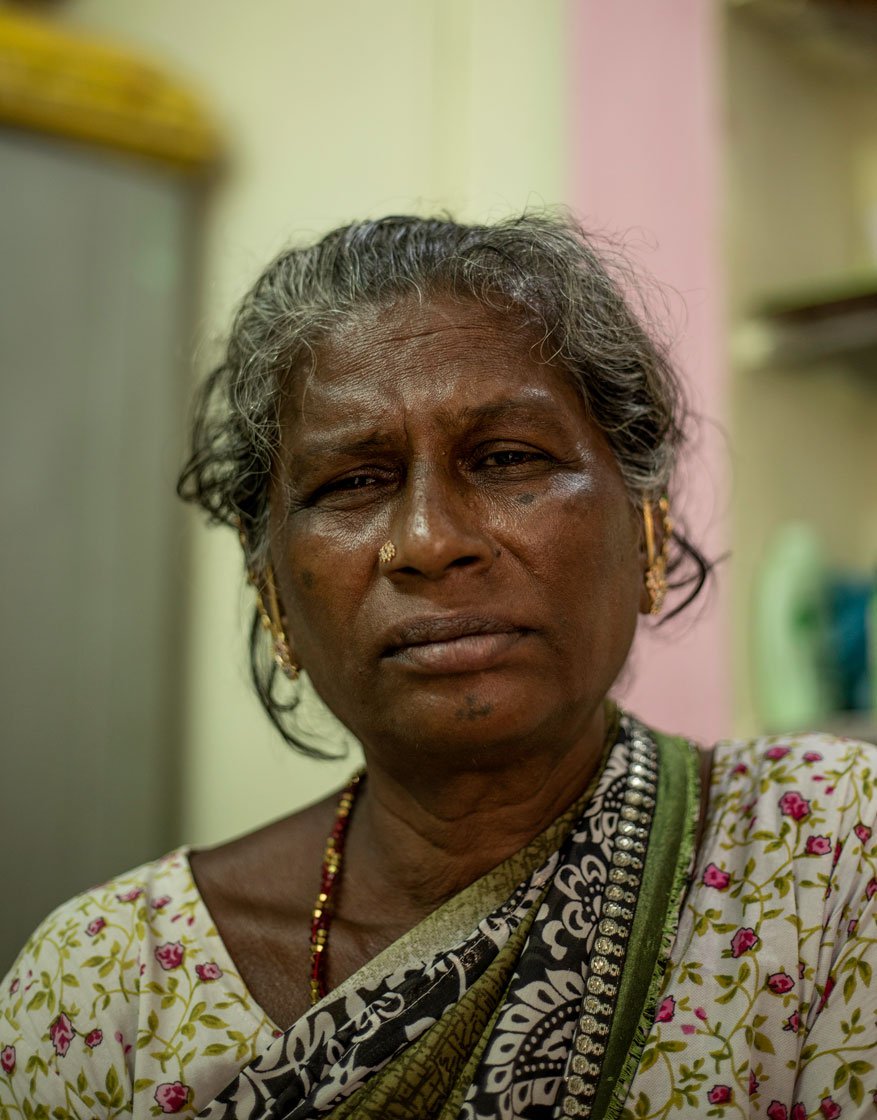 A selfie of Tharma Amma taken 10 years ago in Chennai. Even applying for a pension is very difficult for trans persons, she says

With the guidance of local teachers she also learnt Karagattam, a dance performed with a pot balanced on the head. “This gave me an opportunity to perform at cultural events and even at events organised by the government,” she says.

Later, she further widened her expertise to other art forms including maadu attam (where the performer dances to folk music attired in a costume resembling a cow), maiyil attam ( performed with a peacock costume), and poi kal kudurai attam ( dance of the false-legged horse). These shows were held in several villages across Tamil Nadu. “Applying powder [talcum powder] to our face, we would start our performance at 10 at night and wouldn’t stop till 4 or 5 the following morning,” says Tharma Amma.

In the peak January to June-July season, from various invitations and at different venues, she used to earn a total of between Rs. 8,000 and Rs. 10,000 a month. For the rest of the year, Tharma Amma managed to make up to Rs. 3,000 a month.

The pandemic-lockdowns changed all that. “Even being registered as a member of Tamil Nadu Eyal Isai Nataka Manram has not helped,” she says. This – the Tamil Nadu Centre for Music, Dance, Drama and Literature – is a unit of the state’s Directorate of Art and Culture. “While male and female folk artists easily apply for pension, it is very difficult for trans persons. My applications have been turned down many times. The officials ask me to get recommendations. I do not know from whom should I get these? If I had received some benefits, it would help me in such terrible times. We are cooking only ration rice, no money to buy even vegetables.”

Less than 10 kilometres from Madurai city, in Vilangudi town, Magie too is confronting a similar situation. Until last year, she would travel across Madurai and other districts to earn a living singing kummi paatu. She is among few trans women in the district who perform these traditional songs to celebrate the sprouting of seeds after sowing. 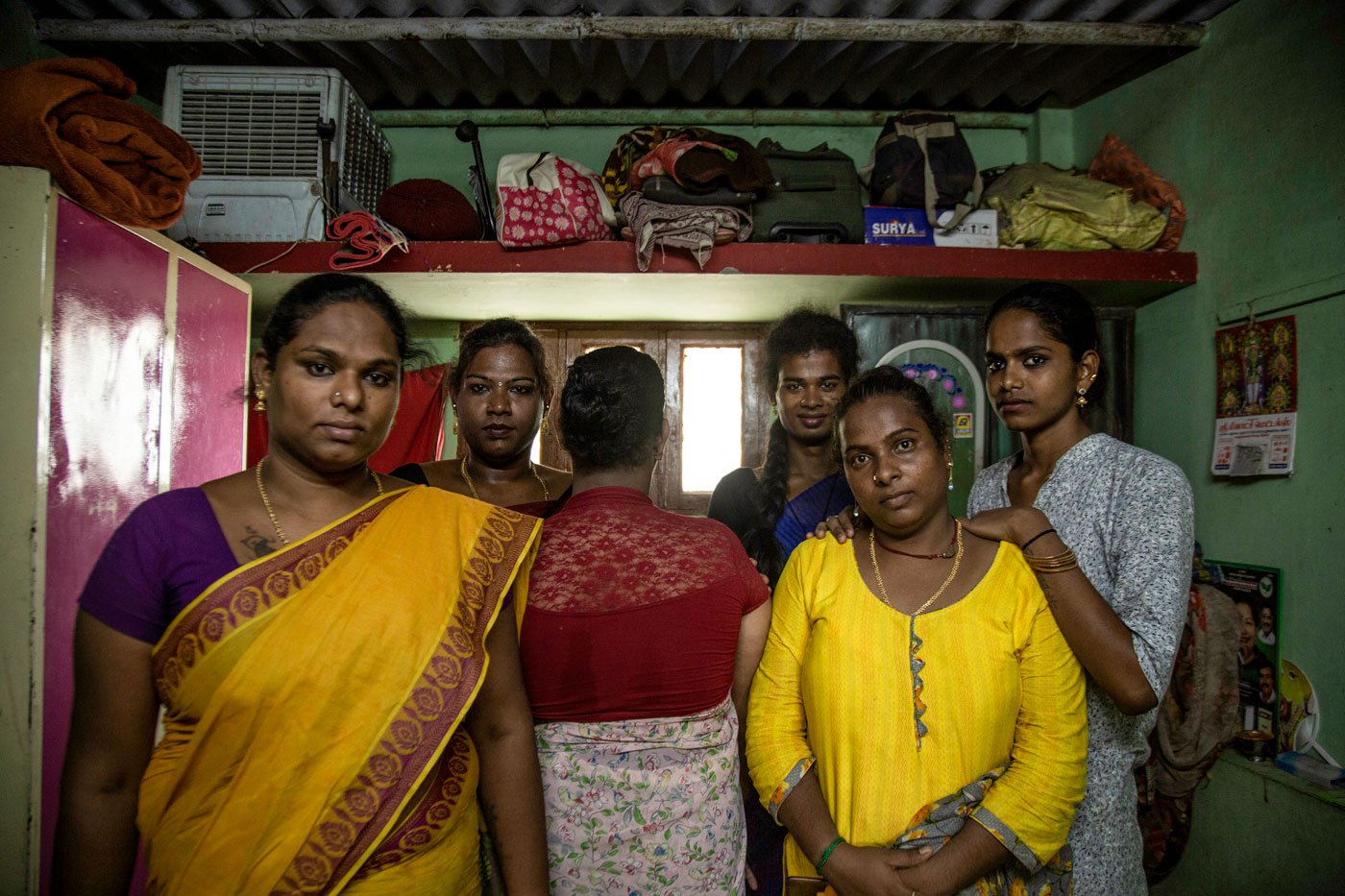 Magie (back to the camera) with friends and colleagues at her room in Madurai: Shalini (left), Bavyasri (behind Shalini), Arasi (in yellow kurta), K. Swesthika (next to Arasi), Shifana (behind Arasi). With the season for invitations and performances closing in July, they will have barely any work opportunities for the rest of this year

“I had to leave home [in Madurai town; her parents were farm labourers in nearby villages] since I was a trans woman,” says 30-year-old Magie (the name she uses). “I was 22 years old at that time. A friend took me to the Mulaipari festival, where I began to learn kummi paatu .”

On the street in Vilangudi where Magie resides along with a community of around 25  other trans women, only two sing kummi paatu , she says. During the 10-day Mulaipari festival celebrated in Tamil Nadu in July every year, this song is a prayer- offering to the village goddesses for rain, soil fertility and a good harvest. “At the festival, we are paid at least Rs. 4,000 to Rs 5,000,” says Magie. “And we get some other opportunities to perform at temples, but those are not certain.”

But the festival was not held in July 2020 and didn’t take place this month either. And since the lockdowns began in March last year, Magie has travelled for very few other performances. “This year, we had an opportunity to perform for three days [in mid-March] at a temple in Madurai just before the lockdown,” she says.

Now, with the season for invitations and performances closing in July, Magie and her co-workers will have barely any work opportunities for the rest of this year. 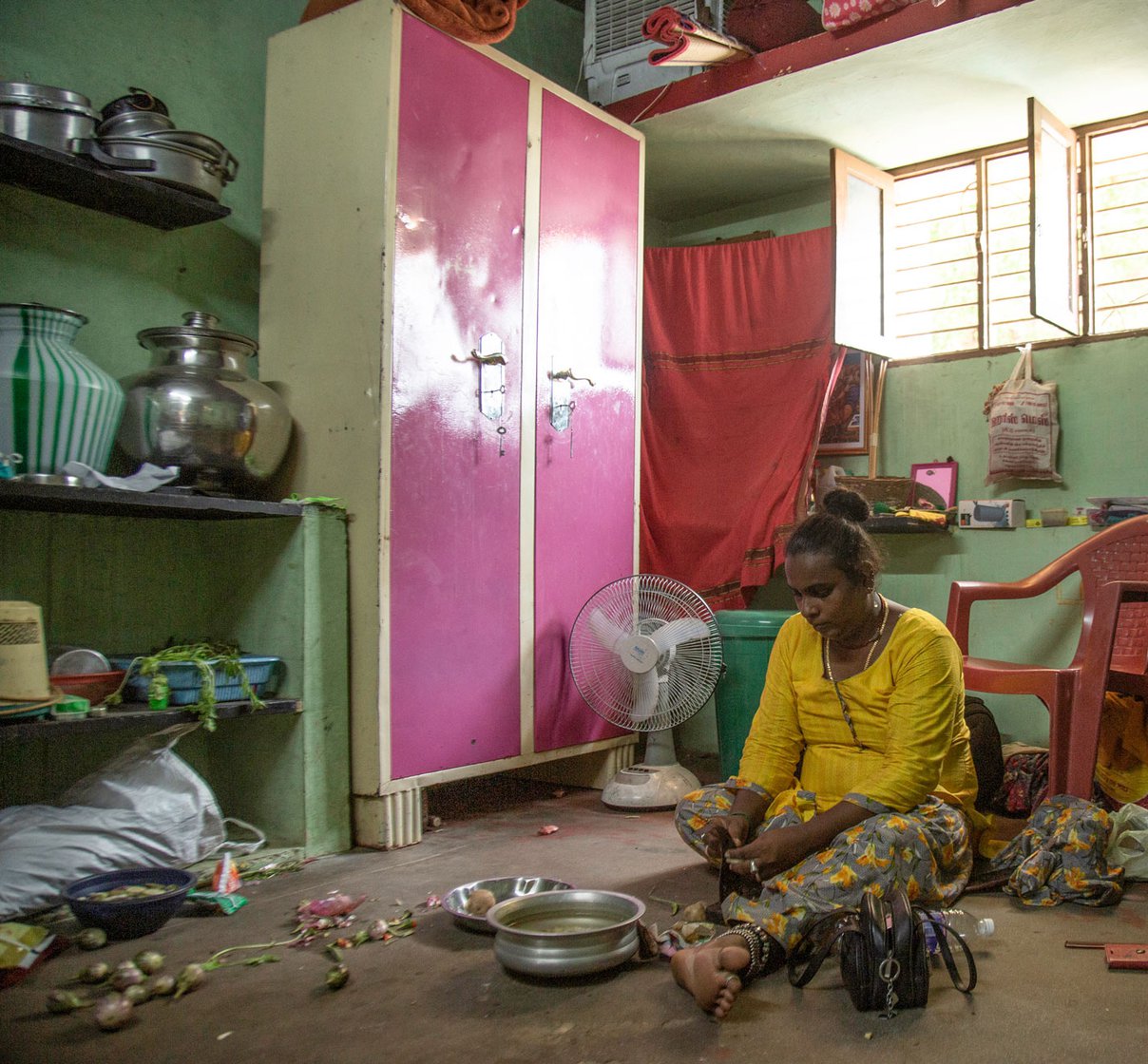 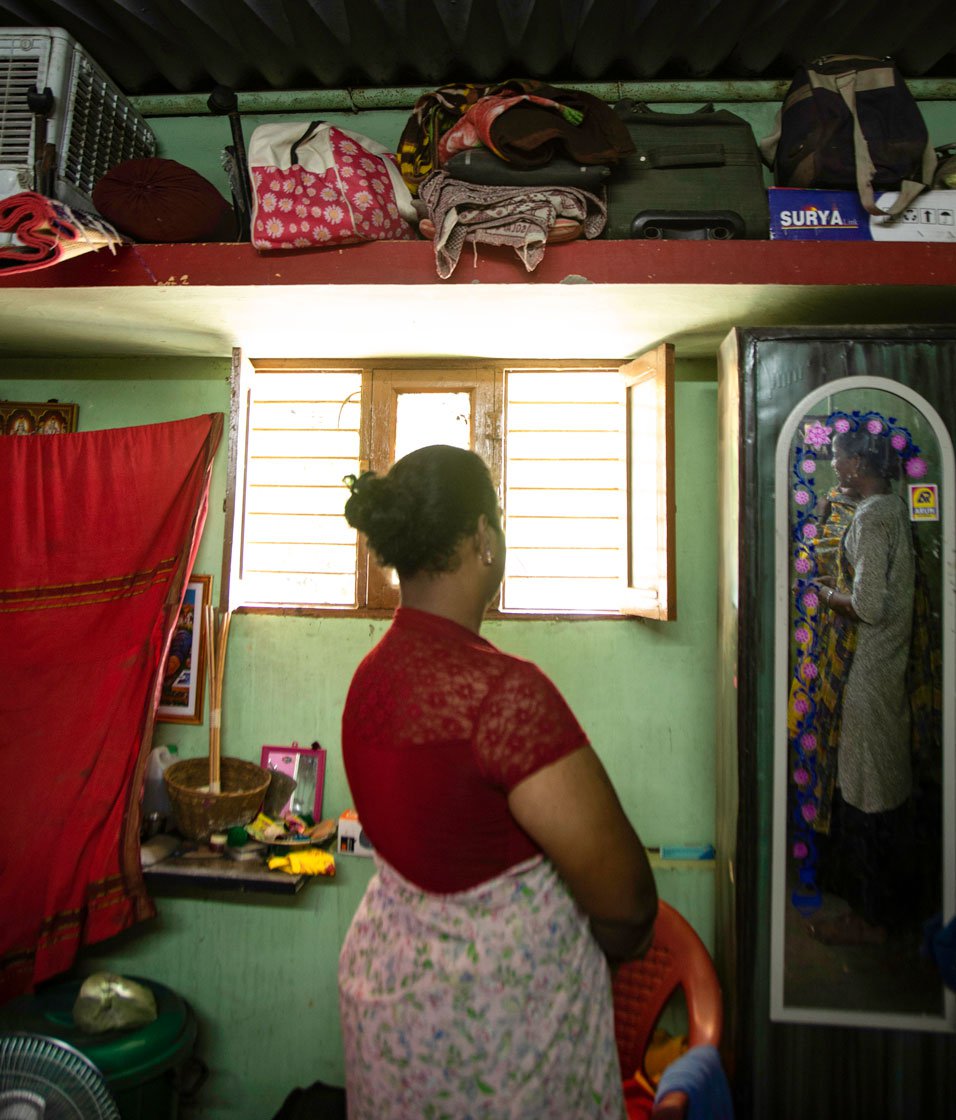 At Magie's room, V. Arasi helping cook a meal: 'I had to leave home since I was a trans woman' says Magie (right)

Since the lockdowns began last year, she says, volunteers have given rations to the trans artists a few times. And Magie is registered with the Directorate of Art and Culture, so she received Rs. 2,000 in May this year from the government. “It is unfortunate that many others have not received,” she says.

Even during peak performance months though, the invitations had been decreasing well before the lockdowns, says Magie. “More men and women are learning kummi songs, and they are preferred at temple performances. At many places, we face discrimination for being trans persons. Earlier, this art form was confined to folk artists and many trans women were engaged in it, but with its growing popularity the opportunities for us are reducing.”

In Viralimalai town of Pudukkottai district, around 100 kilometres from Madurai city, Varsha has also been struggling for 15-plus months. With no money to purchase even basic provisions she has had to depend on her younger brother, who has a diploma in mechanical engineering and works in a local company.

Before the pandemic, 29-year-old Varsha, who is studying in the second year of a post-graduate course in folk art in Madurai Kamaraj University, used to earn an income by performing folk dances at festivals and temples during the night, and studying during the day – with just a 2-3 hour break to rest. 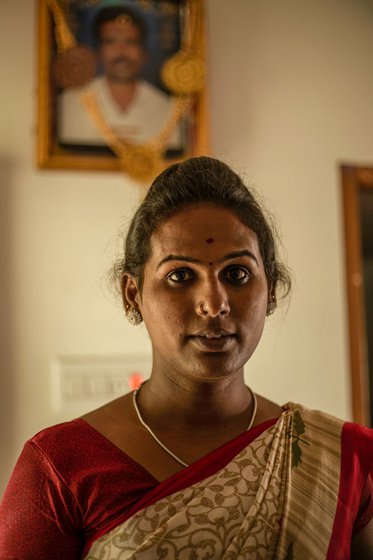 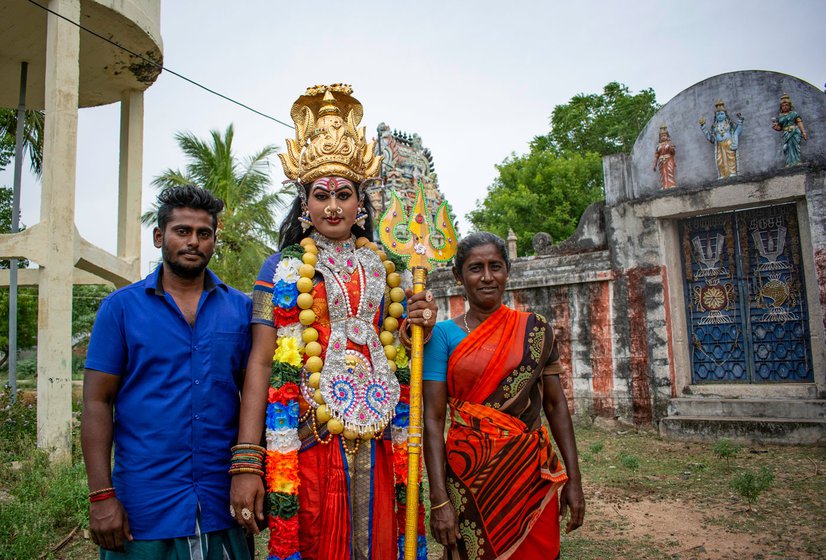 Left: Varsha at her home in Pudukkottai district. Behind her is a portrait of her deceased father P. Karuppaiah, a daily wage farm labourer. Right: Varsha dressed as goddess Kali, with her mother K. Chitra and younger brother K. Thurairaj, near the family's house in Viralimalai

She says she is the first trans woman to perform katta kal attam (she sent me an article in local newspaper that says this), for which the performers tie two long wooden legs and dance to music. It requires lot of experience and skill to find the balance.

Varsha’s repertoire extends to various other dance forms including thappattam , where performers dance to the music of the thappu , a traditional drum played predominantly by Dalits. But she says, deiviga nadanam (dance of the goddess) is her favourite. She is a popular folk artist in Tamil Nadu, and her performances have been telecast on major Tamil television channels. She has been felicitated by local organisations, and has travelled to cities across the country including Bengaluru, Chennai and Delhi to perform.

Varsha (the name she prefers to use) is also a founder member of the Ardhanari Kalai Kulu, a trans women artists group formed in 2018, whose seven members live in different villages across Madurai district. Before the first and second Covid waves, they would get invitations for at least 15 programmes from January to June. “We were able to earn at least Rs 10,000 [each] a month,” says Varsha.

“My art is my life,” she adds. “We get to eat only when we perform. What we used to earn during those first six months is what we had to tide over the next six months.” For her and other trans women, their earnings were always just enough to cover basic expenses. “The money was never sufficient for savings,” she says. “It is difficult to save  because we have to also take care of the expenses for the costumes, travel and food. When we approach the panchayat office seeking loans, our requests are declined. We are unable to avail loans from any bank [without adequate documentation]. We are in a situation where we are ready to perform for even Rs. 100.” 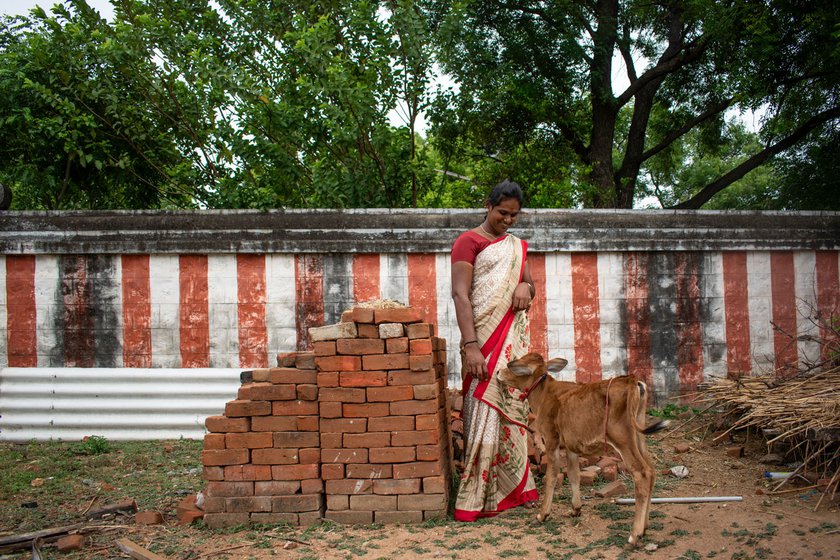 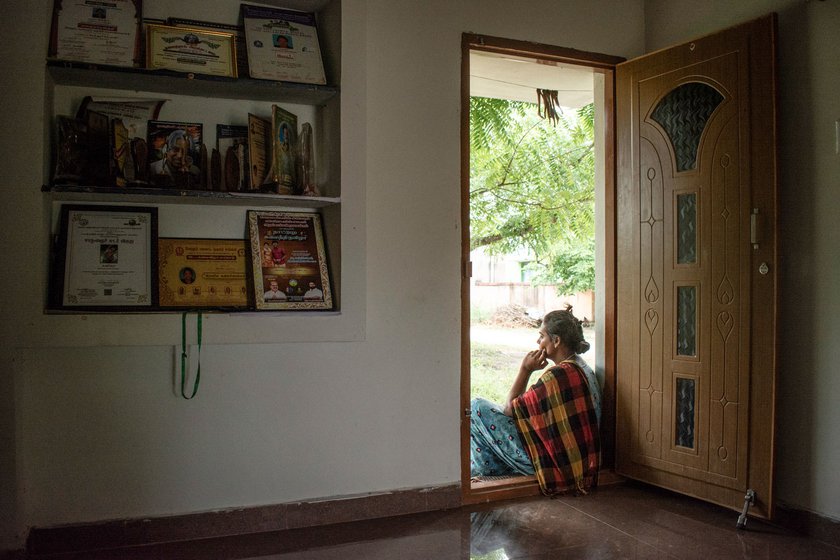 Varsha, a popular folk artist in Tamil Nadu who has received awards (displayed in her room, right), says 'I have been sitting at home for the last two years'

Varsha became aware of her trans identity when she was around 10 years old and in Class 5, and first performed a folk dance on stage at the age of 12 – which she learnt by watching dances during local festivals. She received formal training only when she enrolled in the university course in folk art.

“My family refused to accept me, and I had to leave home at the age of 17. It was my passion for folk art that made my family [eventually] accept me,” says Varsha, who lives with her mother (a former farm labourer) and younger brother in Viralimalai village.

“But I have been sitting at home for the last two years now [since the first lockdown in March 2020. We haven’t received any relief from anyone [except friends]. I have approached NGOs and individuals seeking help. Even those who were able to help us last year couldn’t do so this year,” she says. “Trans folk artists in rural areas have not received any financial aid from the government either. Like last year, this year too we were left to fend for ourselves without any work. We have remained invisible.”

The interviews for this story were done on the phone.

S. Senthalir is a Reporter and Assistant Editor at the People's Archive of Rural India. She was a PARI Fellow in 2020.