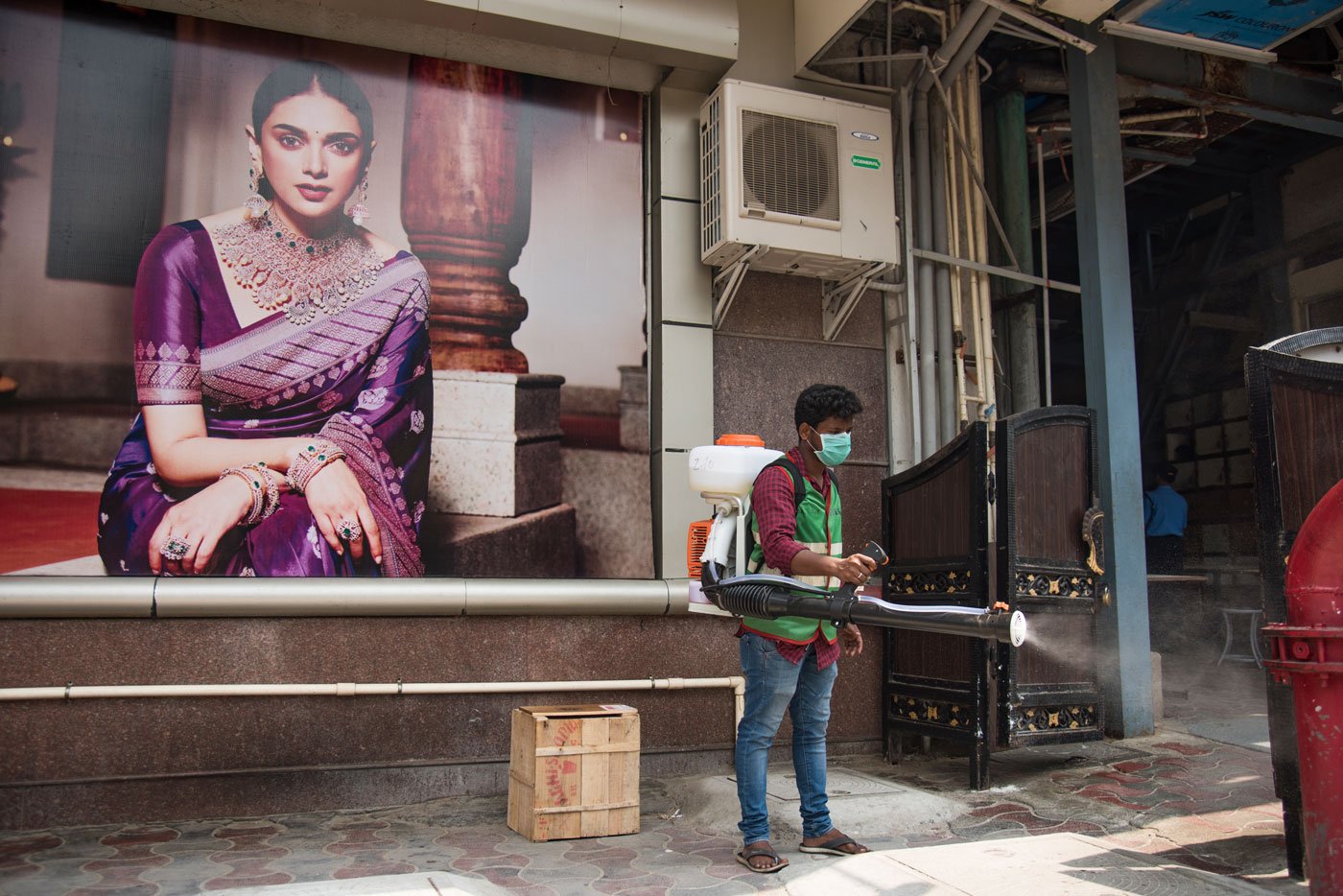 Sanitation workers – the wages of ingratitude

Sanitation workers in Chennai are walking long distances to work during the lockdown, or journeying on garbage lorries. Taking leave for a day during this period invites penalties, even sacking

“No, we are not covered by this curfew. We cannot afford to take a day off. After all, people need to stay safe – and for that we have to keep cleaning the city,” says Deepika, a sanitation worker in the Thousand Lights locality of Chennai.

On March 22, almost the entire country stayed at home under the ‘Janata Curfew’ – except, of course, for the 5 p.m. crowds that congregated to express ‘gratitude’ to all health sector-related personnel. Sanitation workers, supposedly among those being showered with that gratitude, worked throughout the day, sweeping and cleaning the metro. “Our services are needed more than before,” says Deepika. “We have to wipe the virus off these streets."

Like on any other day, Deepika and others were cleaning the streets with no protective gear. Unlike on most other days, things got even worse than they usually are. With a nationwide lockdown in force, many of them had to reach work, clambering on to vehicles meant to transport garbage. Some walked several kilometres to reach their worksites. “On March 22, I had to clean more streets than on normal days, since those of my colleagues from faraway places couldn’t make it,” says Deepika.

Most of the women in these photographs are working in localities in central and southern Chennai, like Thousand Lights and Alwarpet, and one stretch of Anna Salai. The women have to reach these places travelling from their homes which are mostly located in northern Chennai.

It’s a strange kind of gratitude they now seem to be receiving. Since the lockdown announcement on March 24, the workers allege, they cannot afford to go on leave. “They have been told that they will lose their jobs if they make themselves absent now,” says B. Srinivasulu, general secretary of the Chennai Corporation Red Flag Union affiliated to the CITU. Srinivasulu says though buses are provided for transport, they are not sufficient and often late. That forces the workers to use the lorries meant for garbage as transport. Sanitation workers here earn up to Rs 9,000 per month, but have to spend almost Rs. 60 on transport every day in the best of times. During curfew and lockdown, those unable to get on to government buses or corporation-arranged vehicles, have to walk all the way. 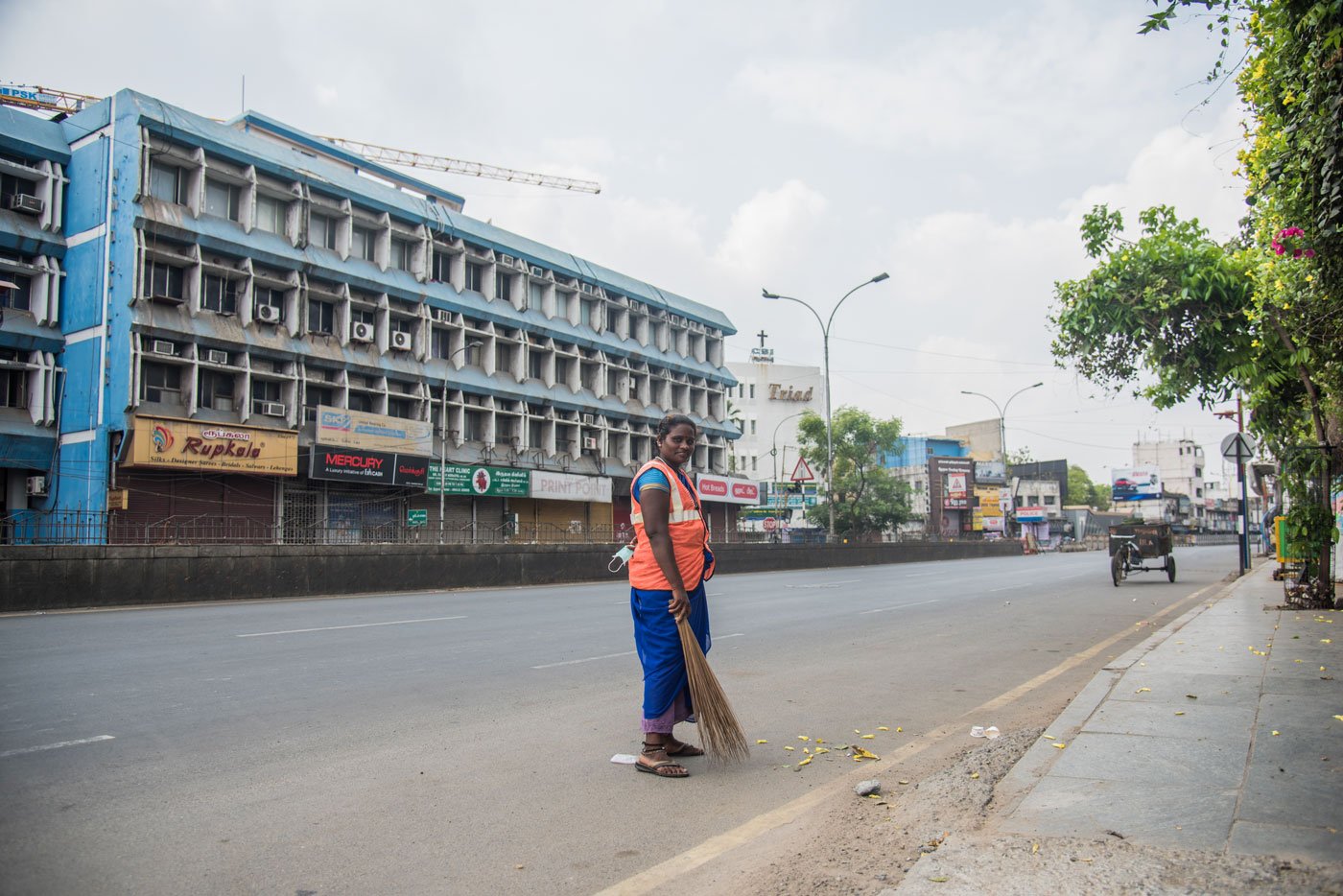 'After all, people need to stay safe – and for that we have to keep cleaning the city', says Deepika, a sanitation worker in the Thousand Lights locality of Chennai

“Very recently, the Chennai Corporation has started giving them protective gear, but these are not of good quality. They have been given disposable masks and are forced to reuse them. A section of malaria workers [who do the fogging work to ward off mosquitos] – only some of them – have been given some protective cover, but have neither shoes nor good quality gloves,” Srinivasulu says. He adds the corporation has sanctioned some additional money, zone-wise, for the anti-coronavirus campaign. But it might take a while before that translates into reality on the ground.

Empty, abnormally quiet streets and tightly locked doors and windows are a recurring scene in any residential locality for the sanitation workers these days. “But we have to toil in the sun so that their kids can live without catching any virus. Who bothers about our own kids and their safety?” one of them asks. While the trash on the streets has come down after the curfew, the garbage from homes has increased. “In this situation, our workers really cannot segregate the garbage as biodegradable and non-biodegradable. We have requested the corporation to temporarily stop this,” says Srinivasulu, pointing out that the sanitation workers are finding it hard to get even drinking water in the lockdown period. “Earlier, they would be given water by local residents in the colonies where they work. But many have been saying they are refused water these days.”

Tamil Nadu, Srinivasulu says, has about 2 lakh sanitation workers. Chennai alone has around 7,000 full-time workers, but the numbers are still very low. “Remember the 2015 floods and the Vardah cyclone the very next year? Workers from 13 districts had to come and labour 20 days in Chennai to restore normalcy. If that is the situation in the state capital, the districts must be grossly understaffed.”

It is not uncommon among sanitation workers to die before retirement. “We have no protective gear and could always end up catching any of these infectious diseases,” says one of them. Some of those who enter sewers to clean them, die of asphyxiation. In just the month of February in Tamil Nadu, at least five workers died in the sewers.

“People of course say they are grateful now, that we are keeping the streets clean and saving them from infections. We have had television channels interview us.  But that is what we have always done," she says.

“We have at all times worked to keep the city clean, and risked our lives doing that. They might thank us only now, but we have always been concerned about their well-being."

The sanitation workers are not paid extra for working during the lockdown period.

There’s gratitude for you. 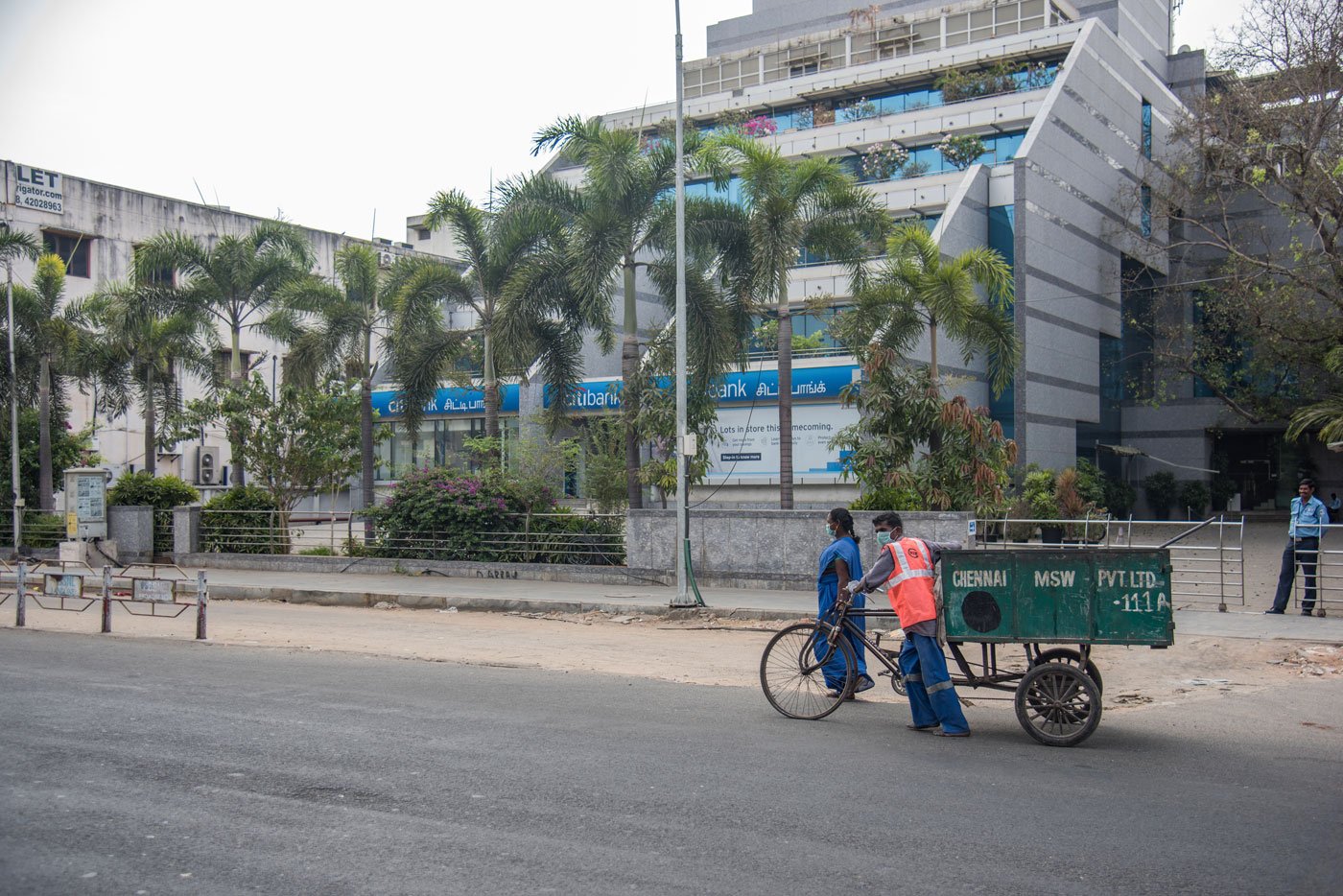 Sanitation workers at Mount Road, Anna Salai, usually one of the busiest roads in Chennai. They earn up to Rs 9,000 per month, but have to spend almost Rs. 60 on transport every day in the best of times. During curfew and lockdown, those unable to get on to government buses or corporation-arranged vehicles, have to walk all the way 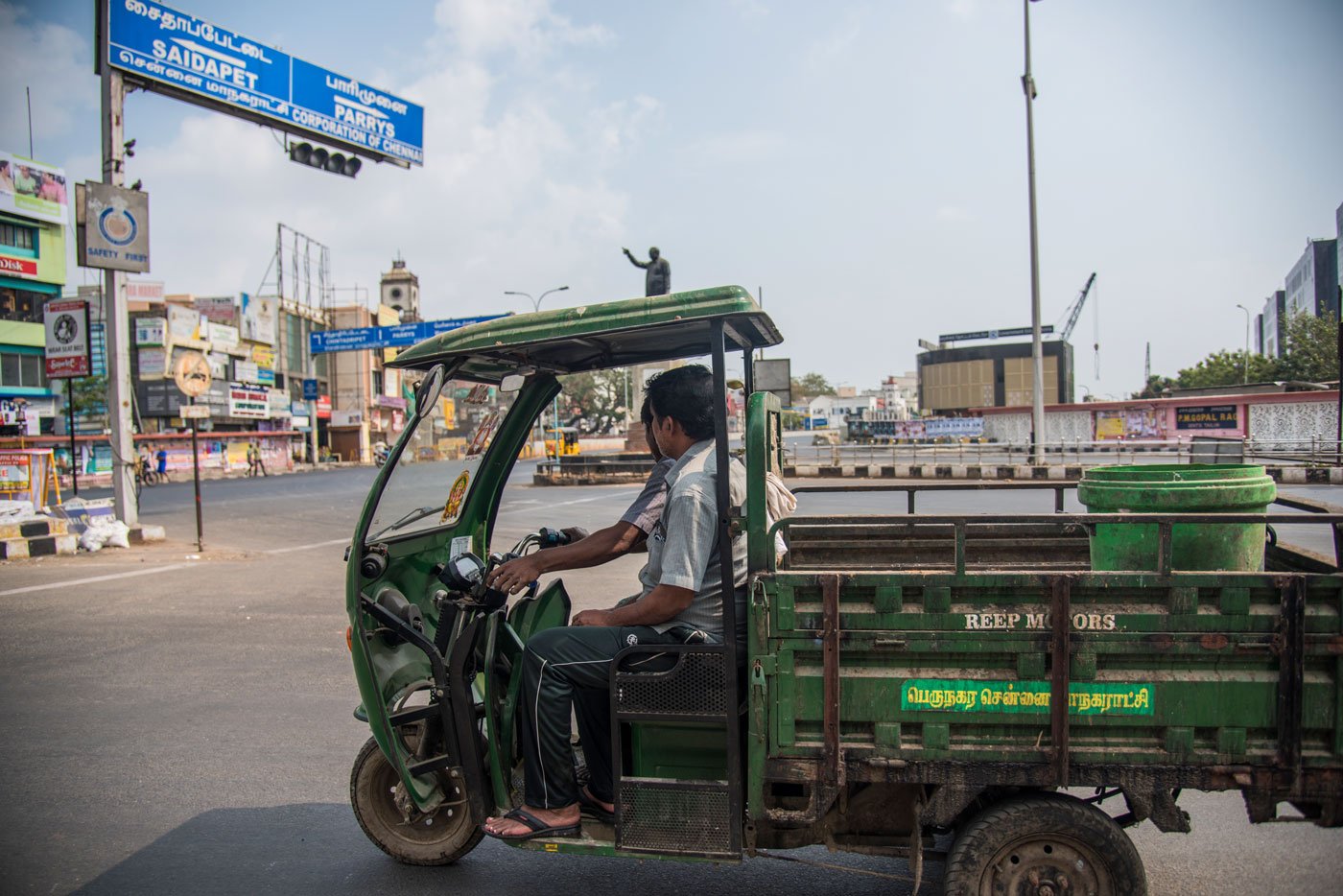 Many of the sanitation workers are reaching Mount Road, Anna Salai, and other workplaces in Chennai by travelling from their homes on garbage trucks 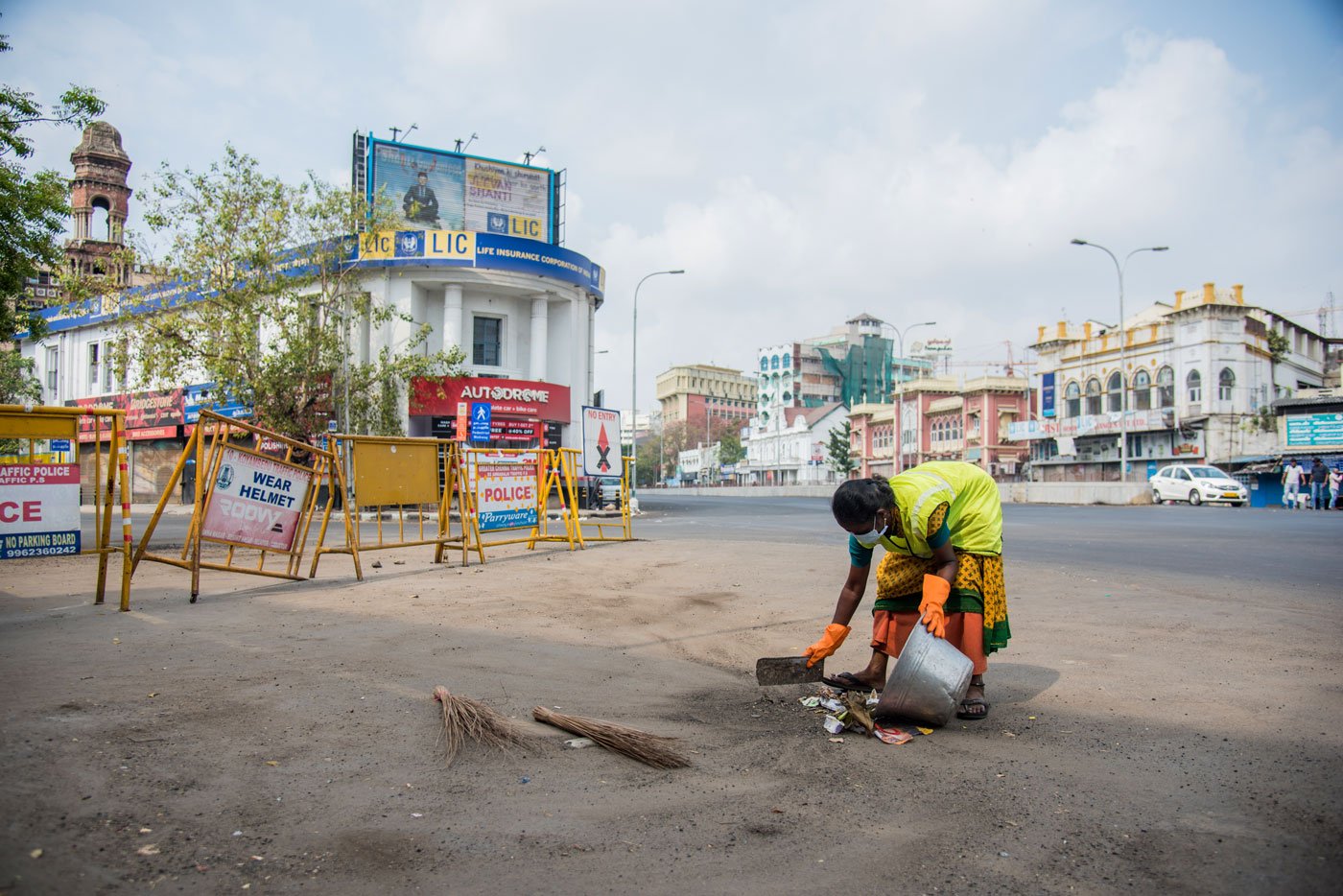 A sanitation worker with just gloves and no other protective gear cleaning the usually busy Ellis Road on March 22, the day of the 'Janata Curfew' 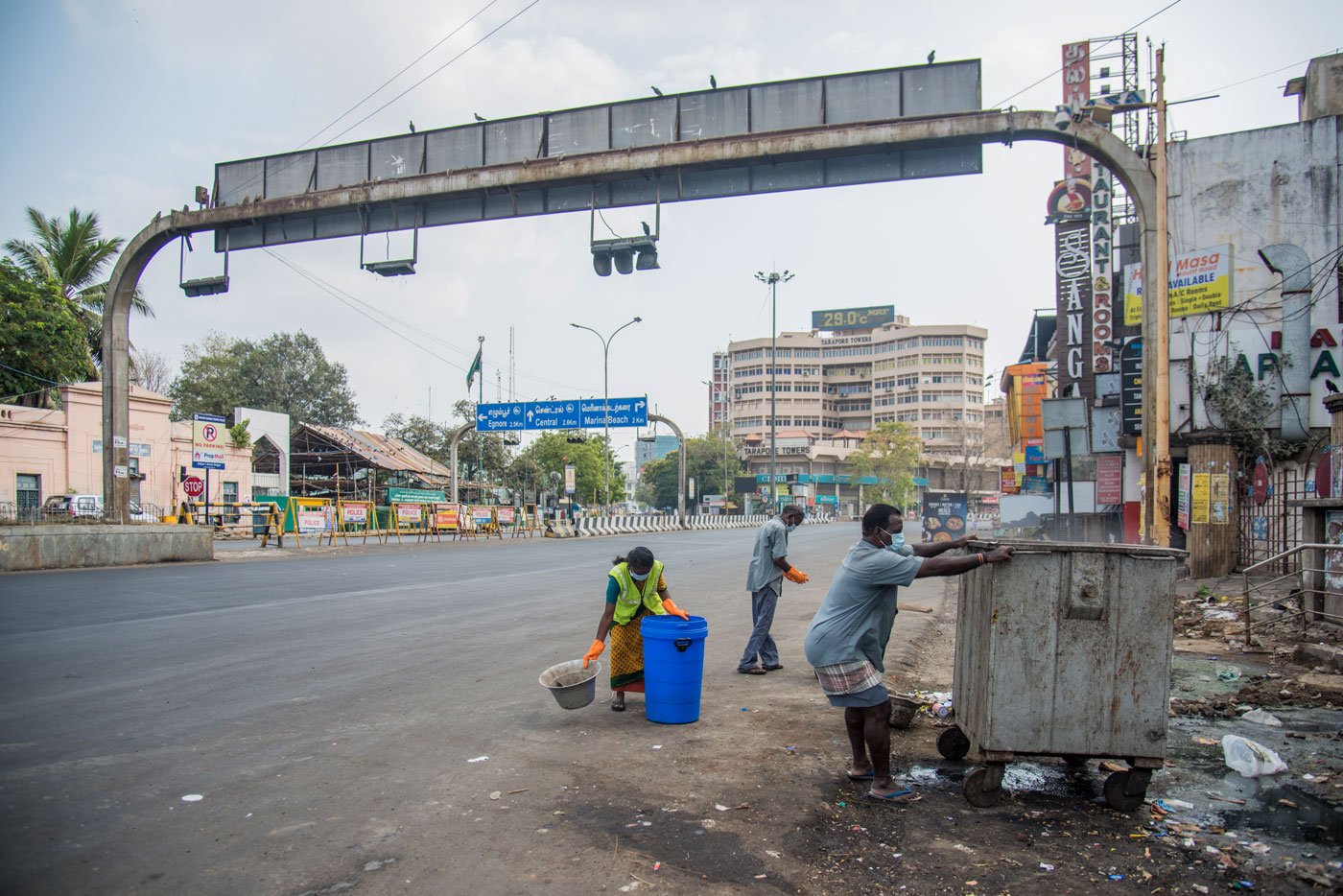 On Ellis Road, on the day of the 'Janata Curfew', workers with ‘disposable’ and supposedly 'protective' gear cleaning the everyone else's garbage 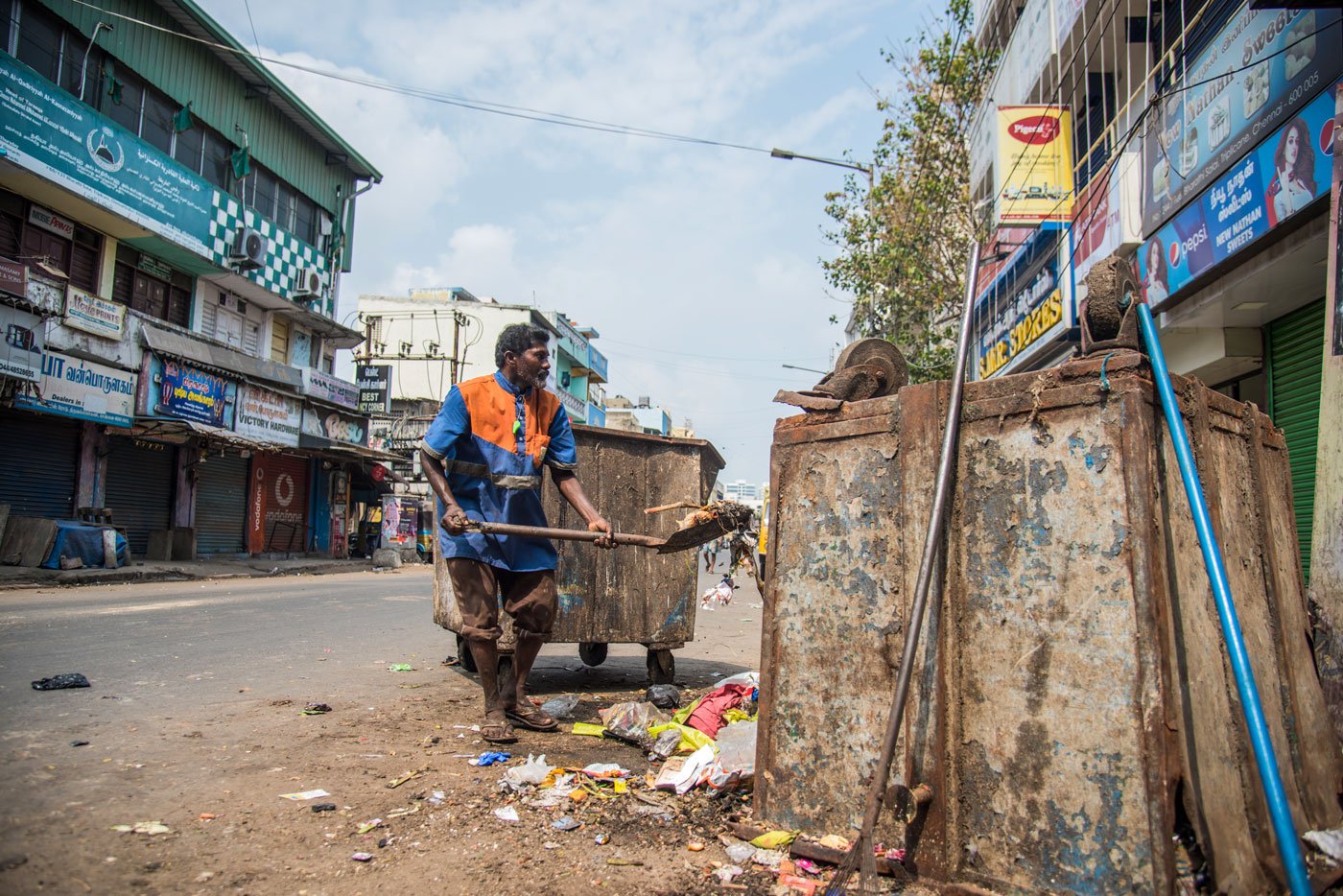 A sanitation worker cleaning a bylane off Ellis Road: 'We have no protective gear and could always end up catching any of these infectious diseases', says one of them 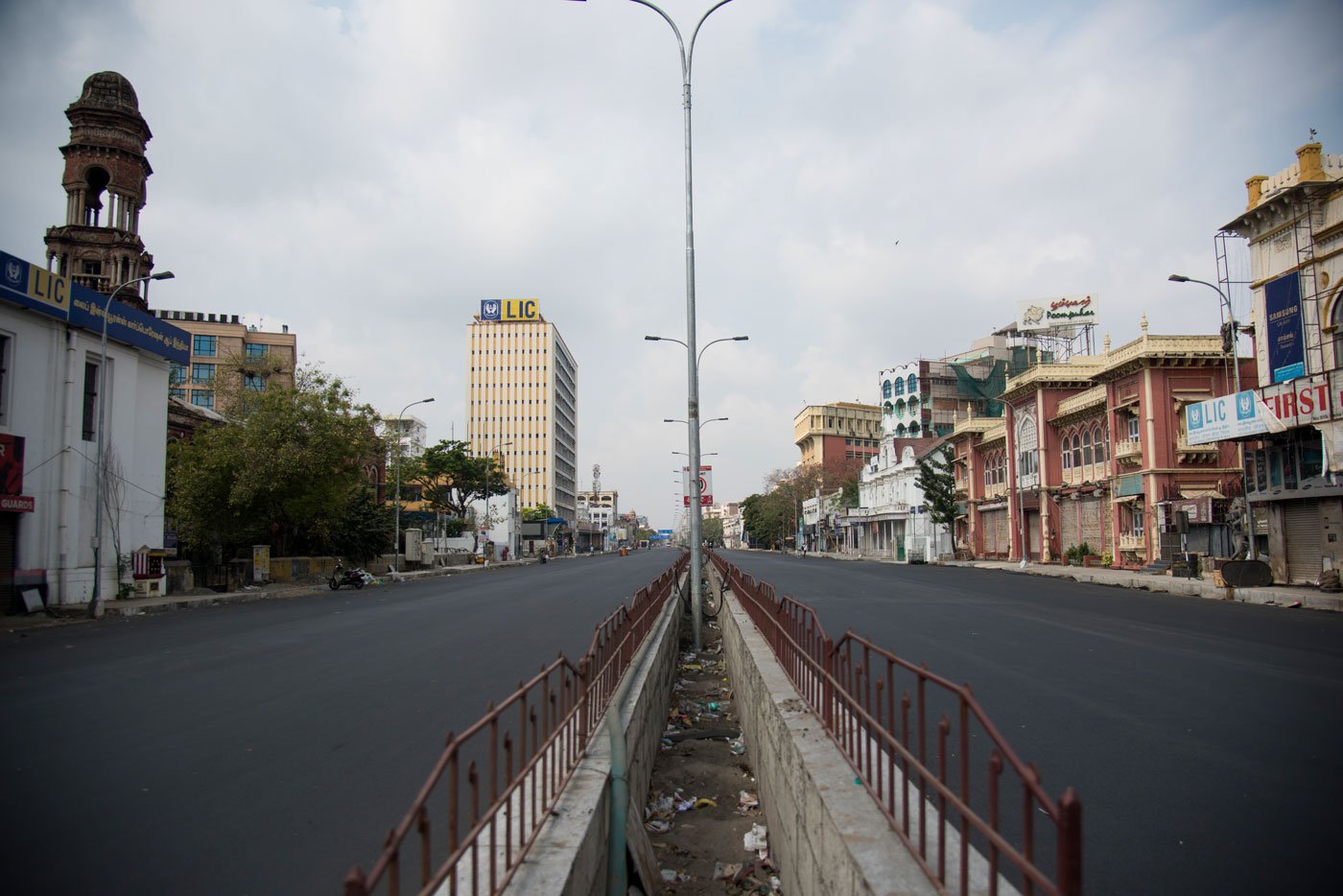 An empty Mount Road on the day of the 'Janata Curfew', when garbage was still cleared and the streets swept 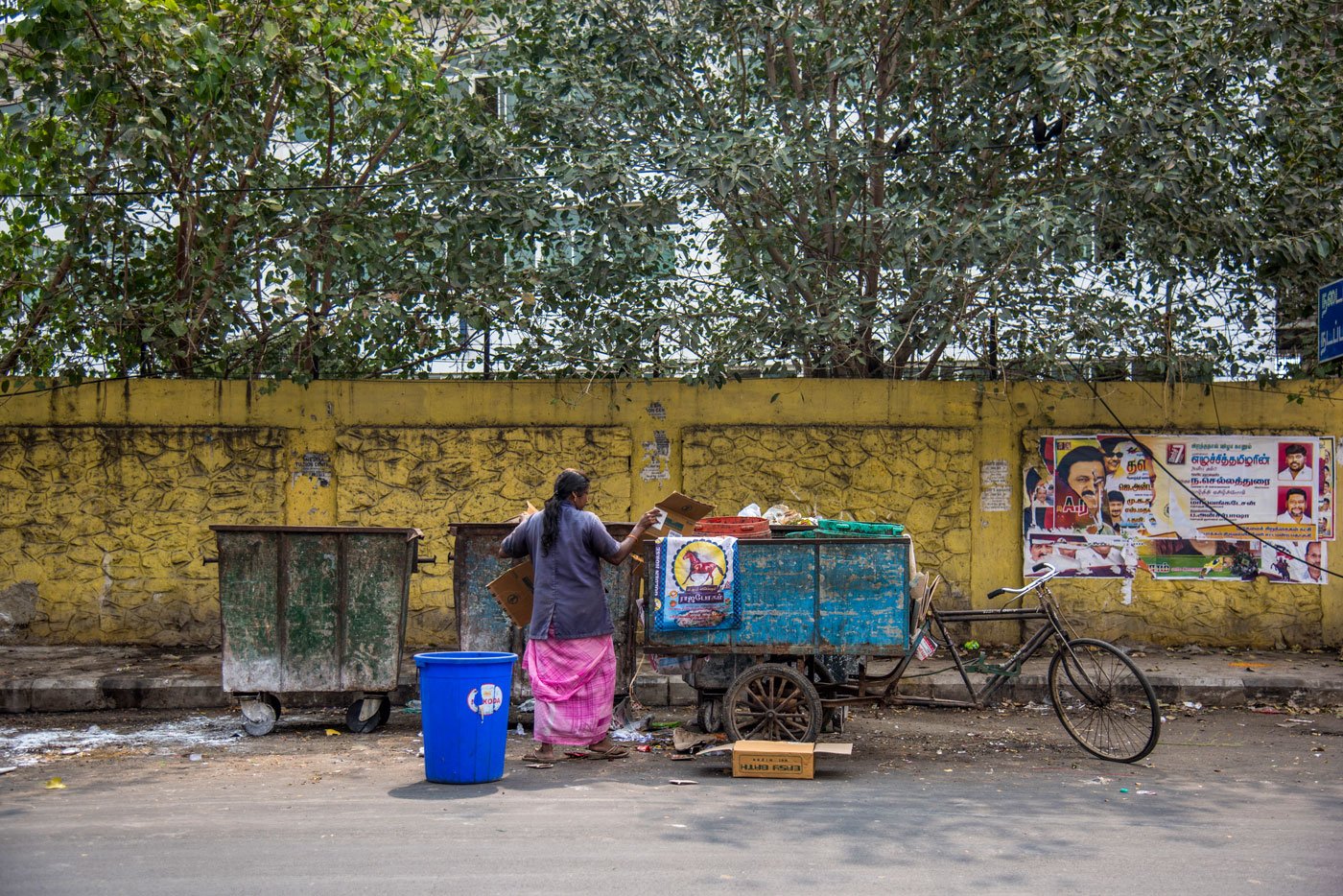 A sanitation worker in the Chepauk locality: they are not paid extra for working during the lockdown period 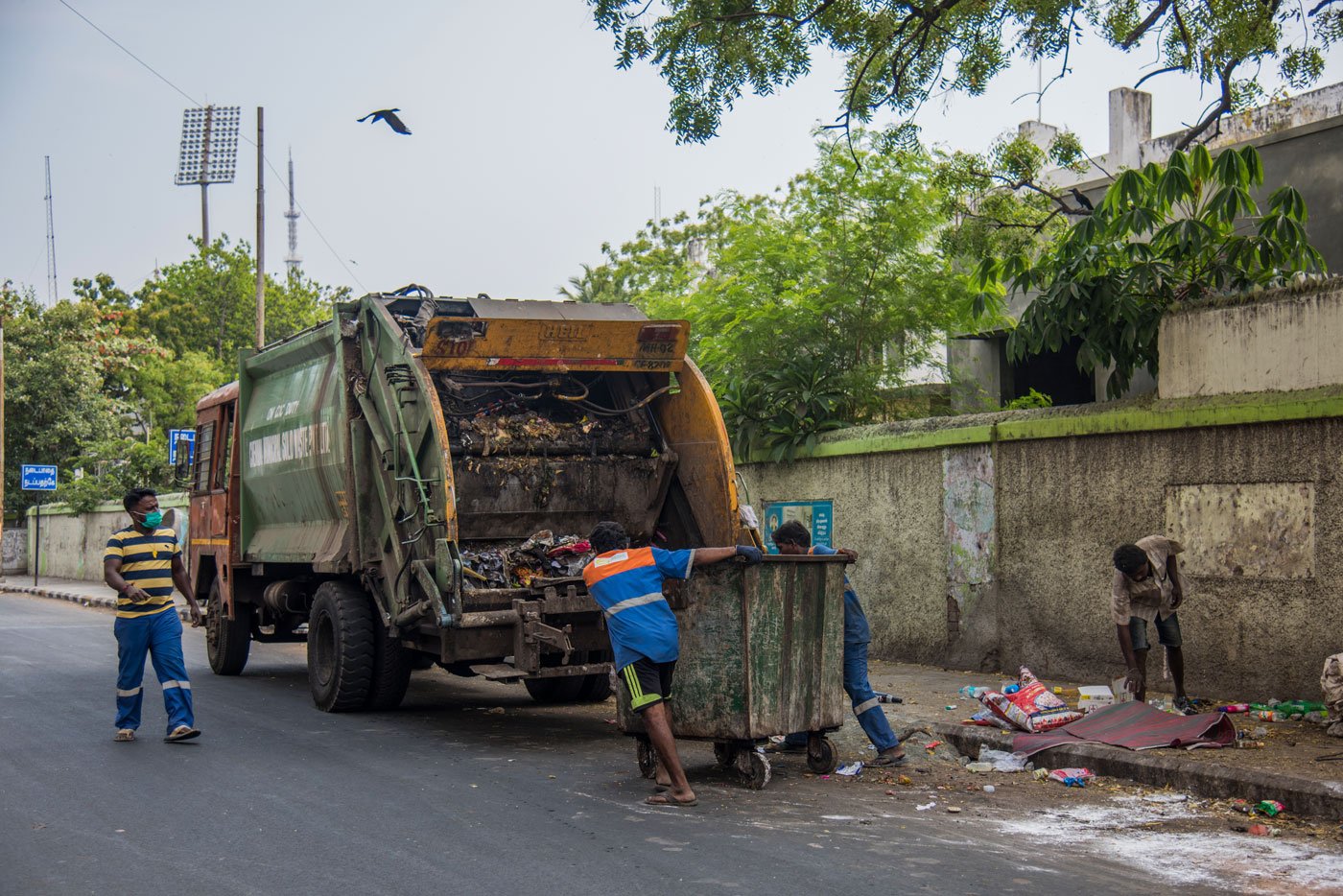 Cleaning Chepauk, near the M. A. Chidambaram International Cricket Stadium in Chennai 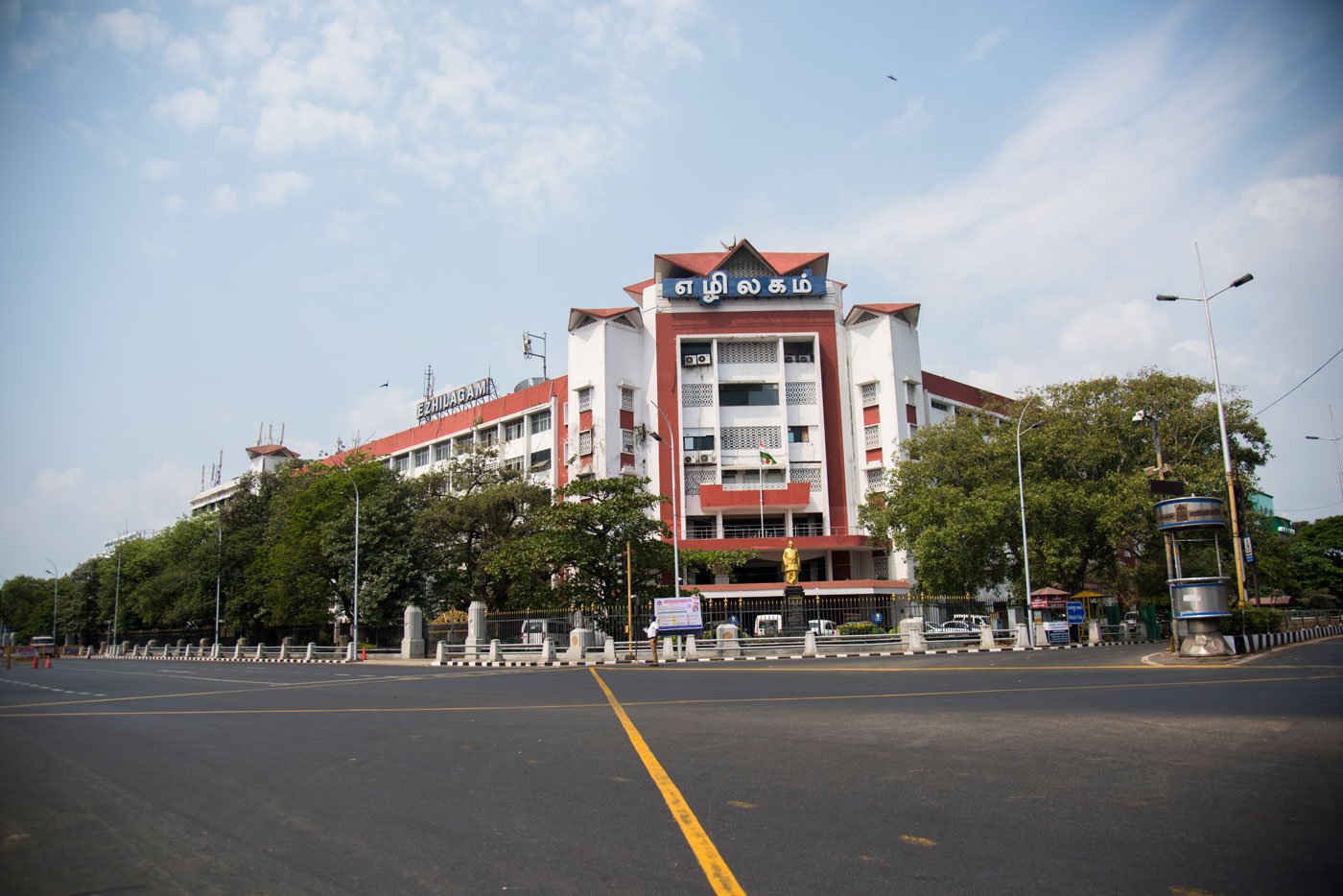 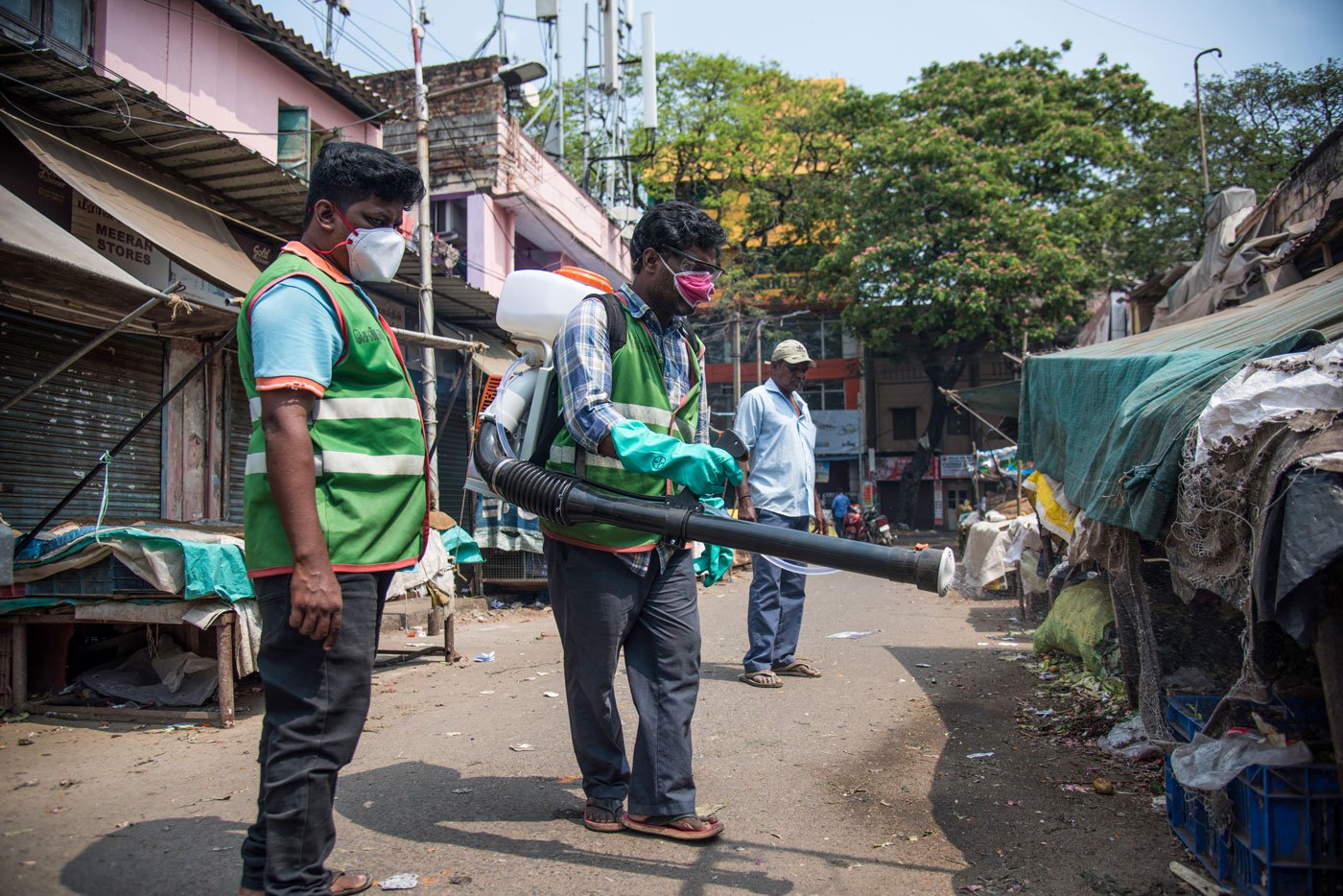 Sanitation workers disinfecting the streets of Alwarpet, with only flimsy masks and gloves as 'protective' gear 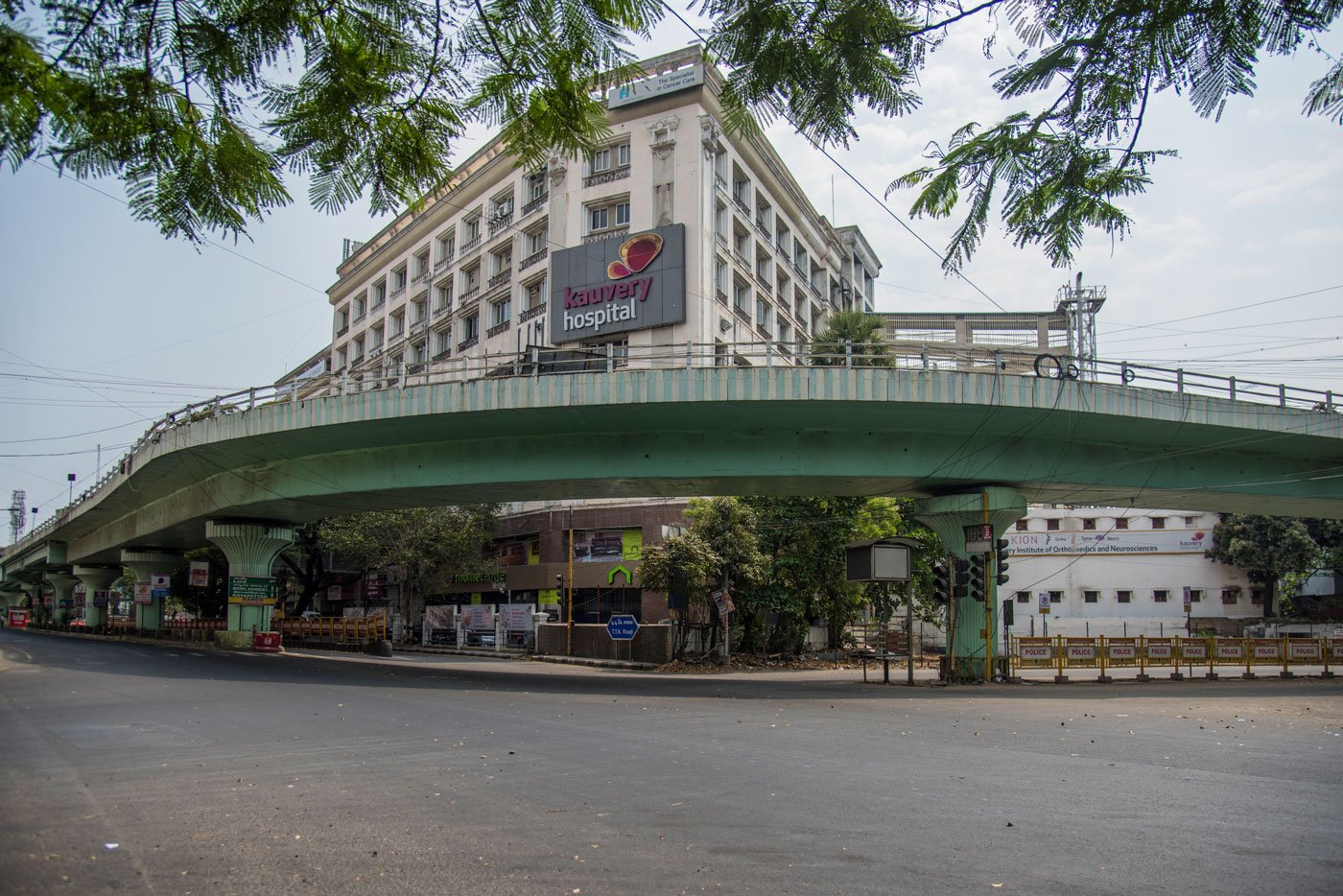 The sanitised empty roads of Alwarpet 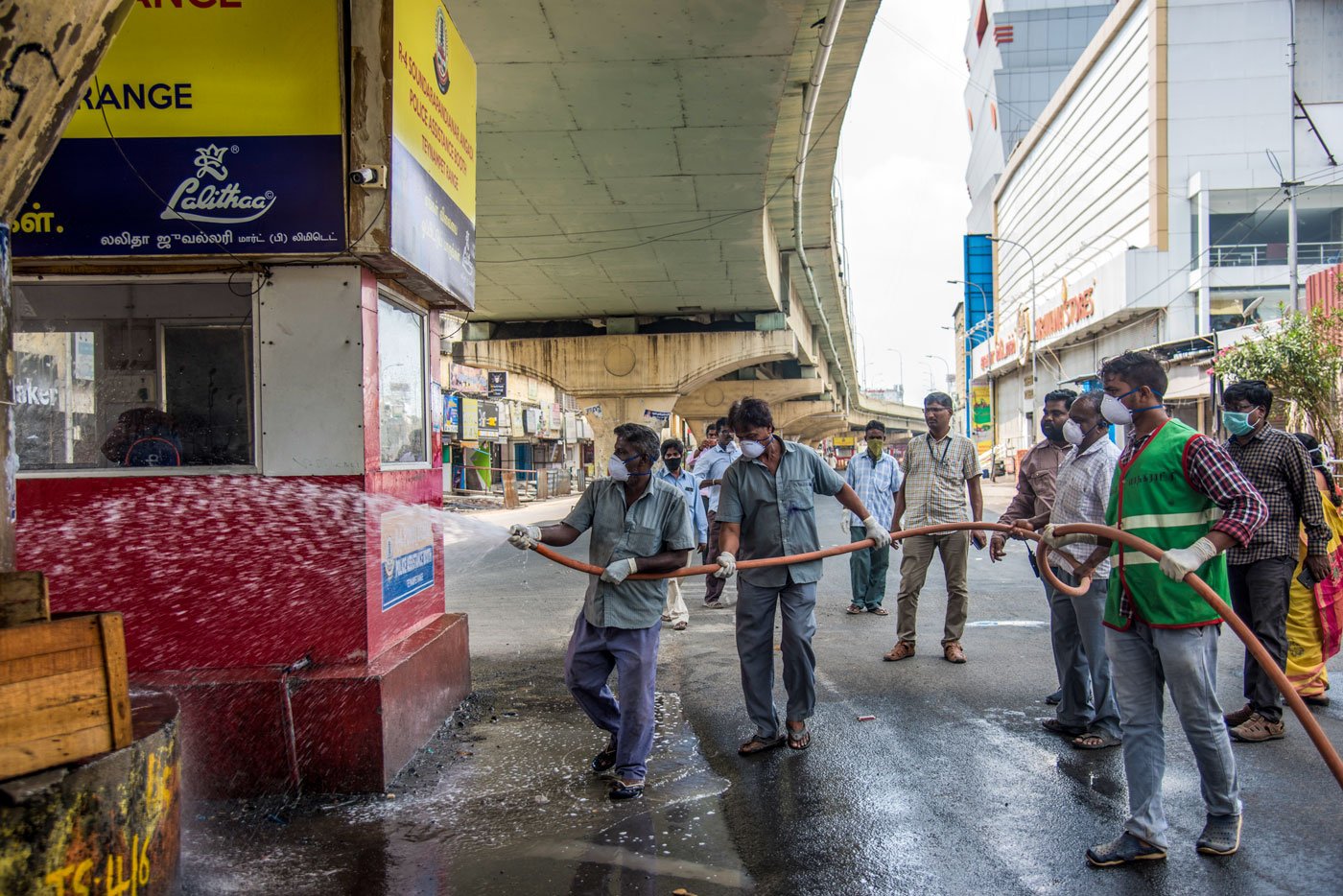 Washing and cleaning the usually busy streets of the T. Nagar commercial locality, with only masks and no other sturdy protective gear 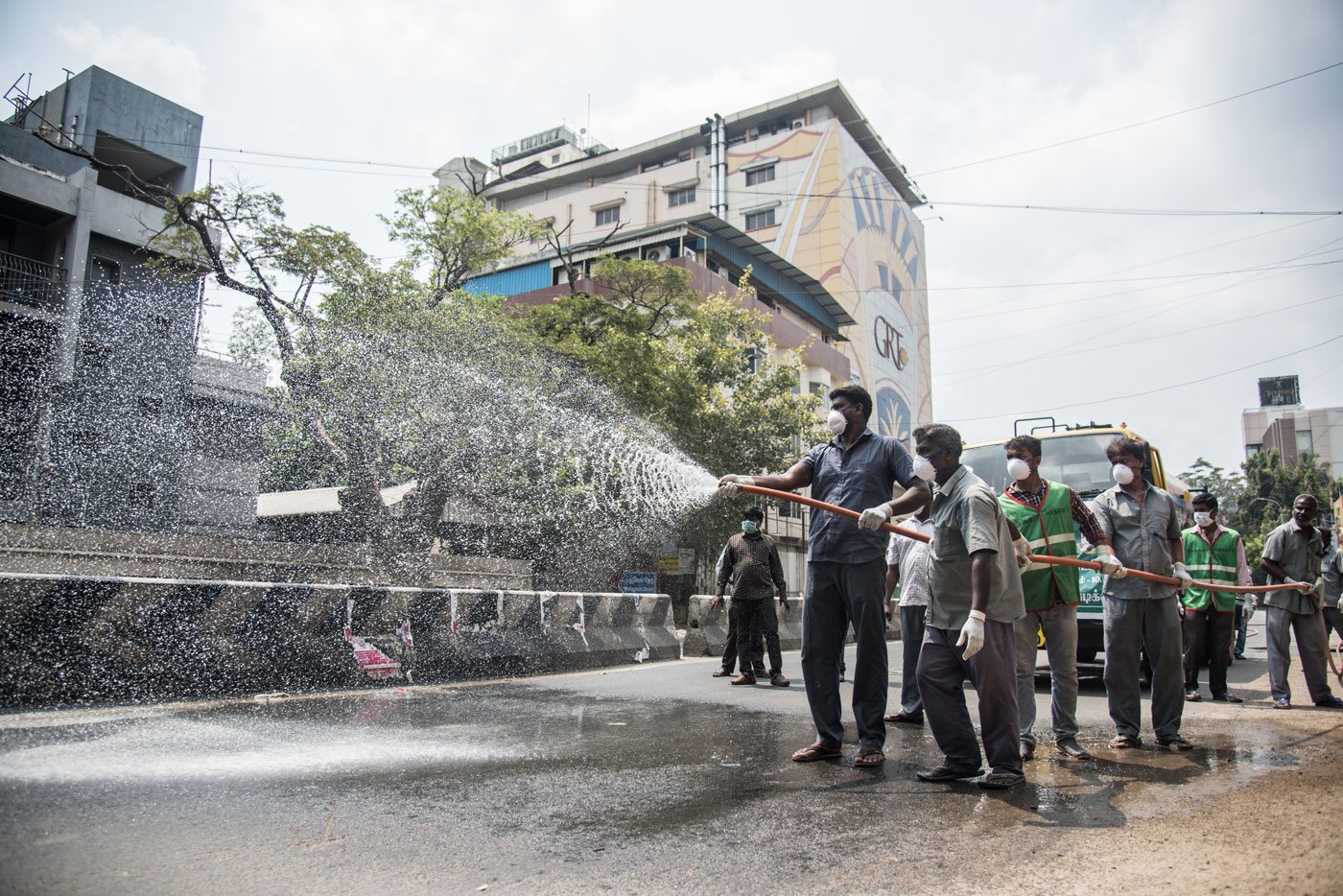 The cleaning of different streets in T. Nagar continues 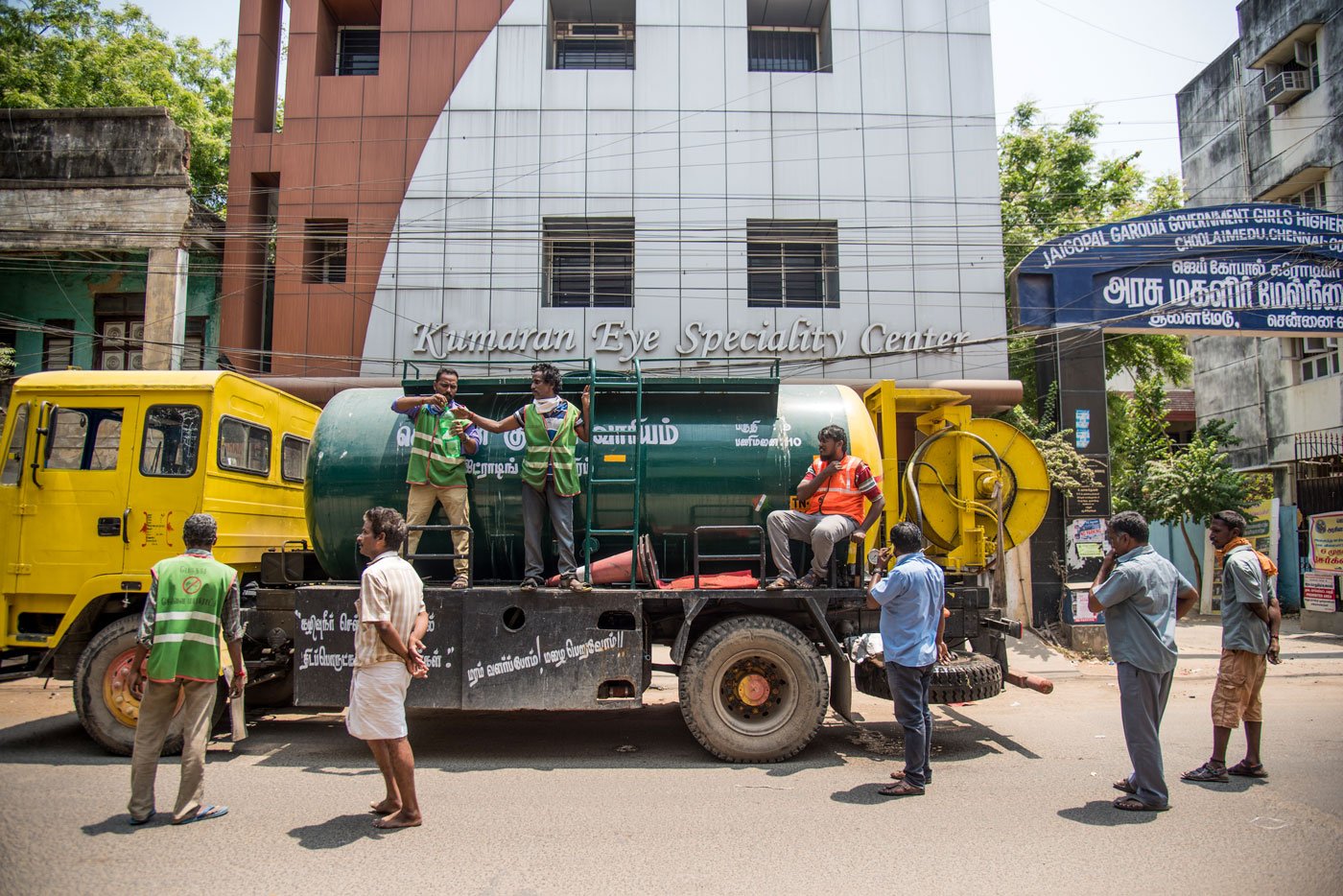 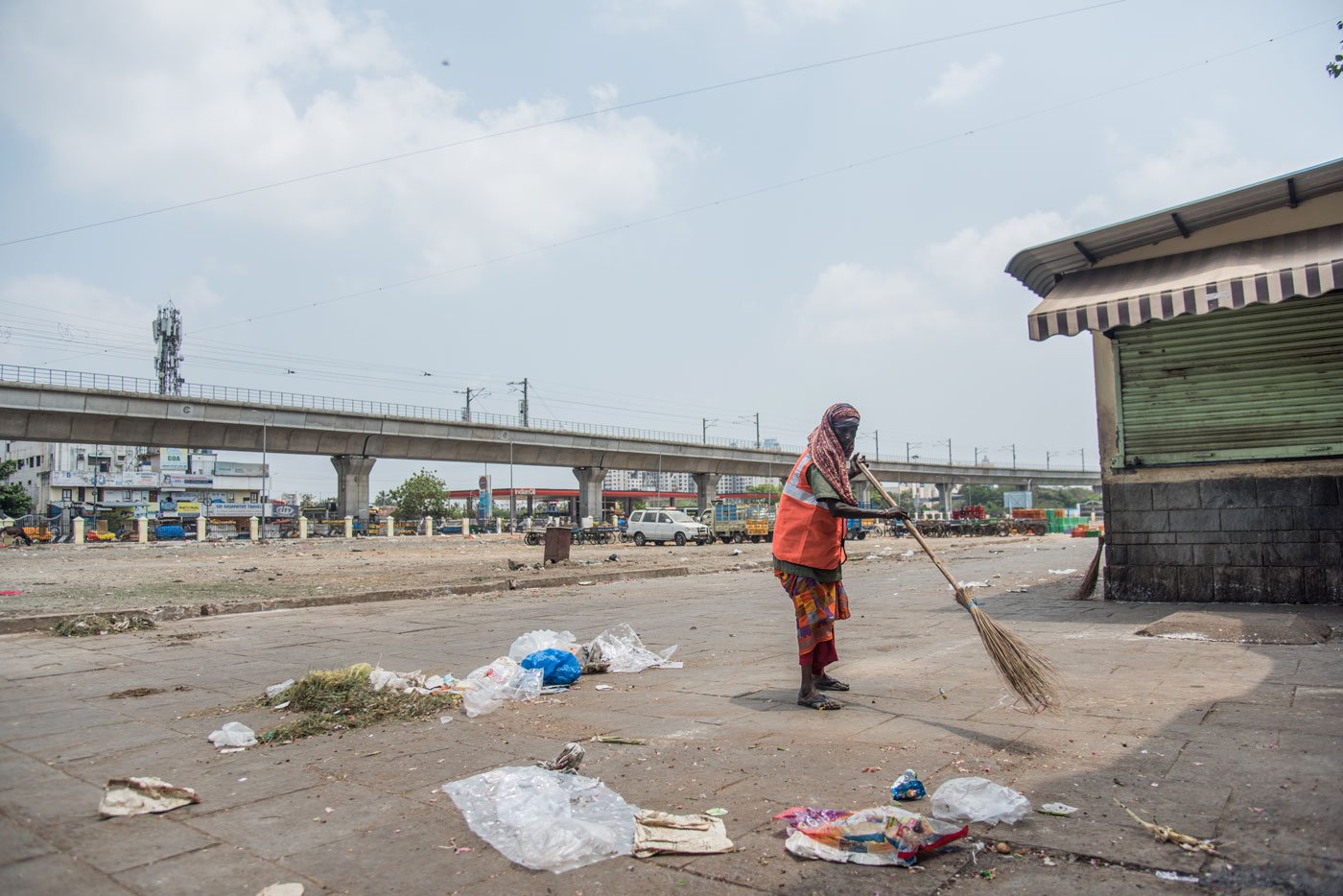 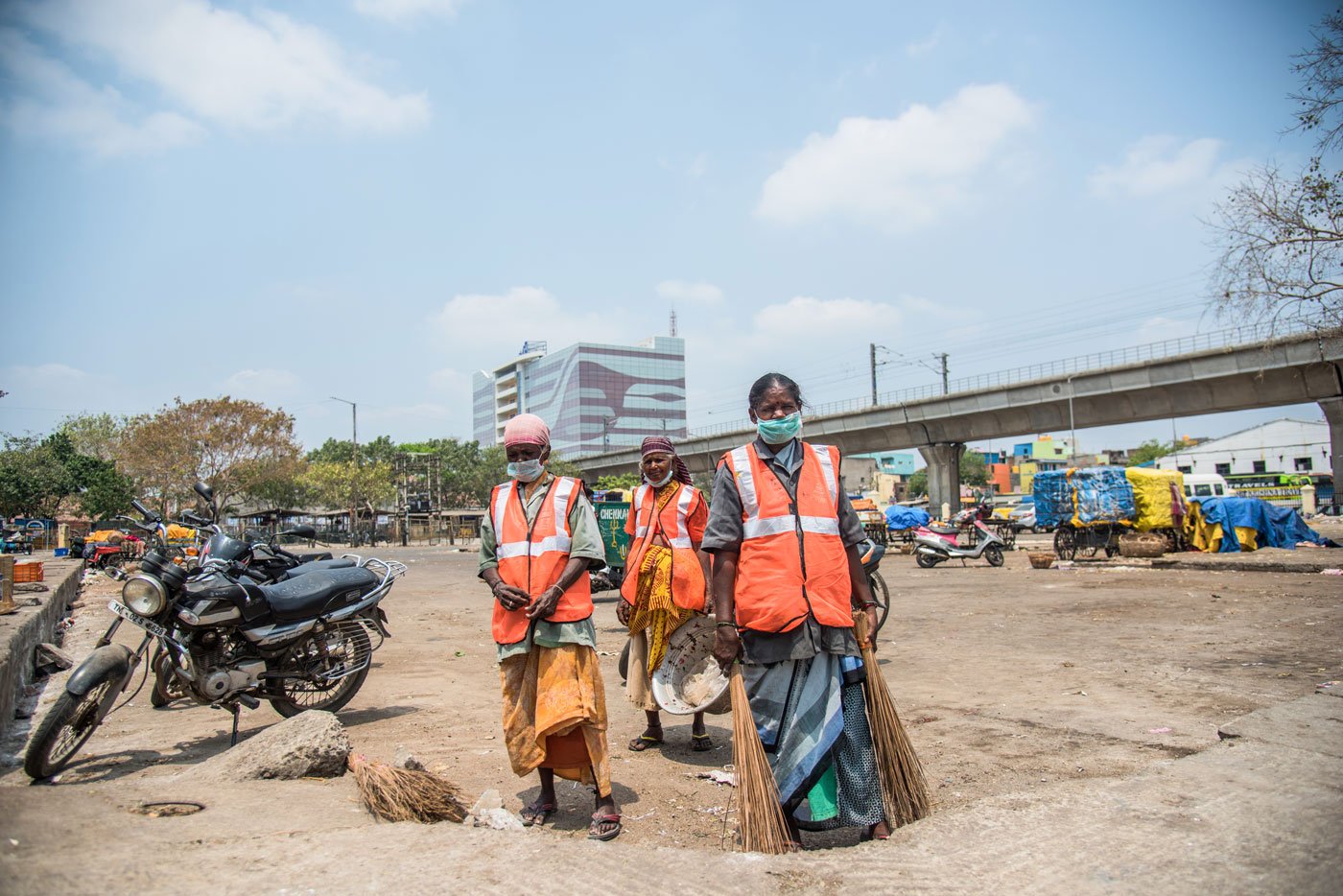 Sanitation workers in Koyambedu: 'We have at all times worked to keep the city clean, and risked our lives doing that. They might thank us only now, but we have always been concerned about their well-being'