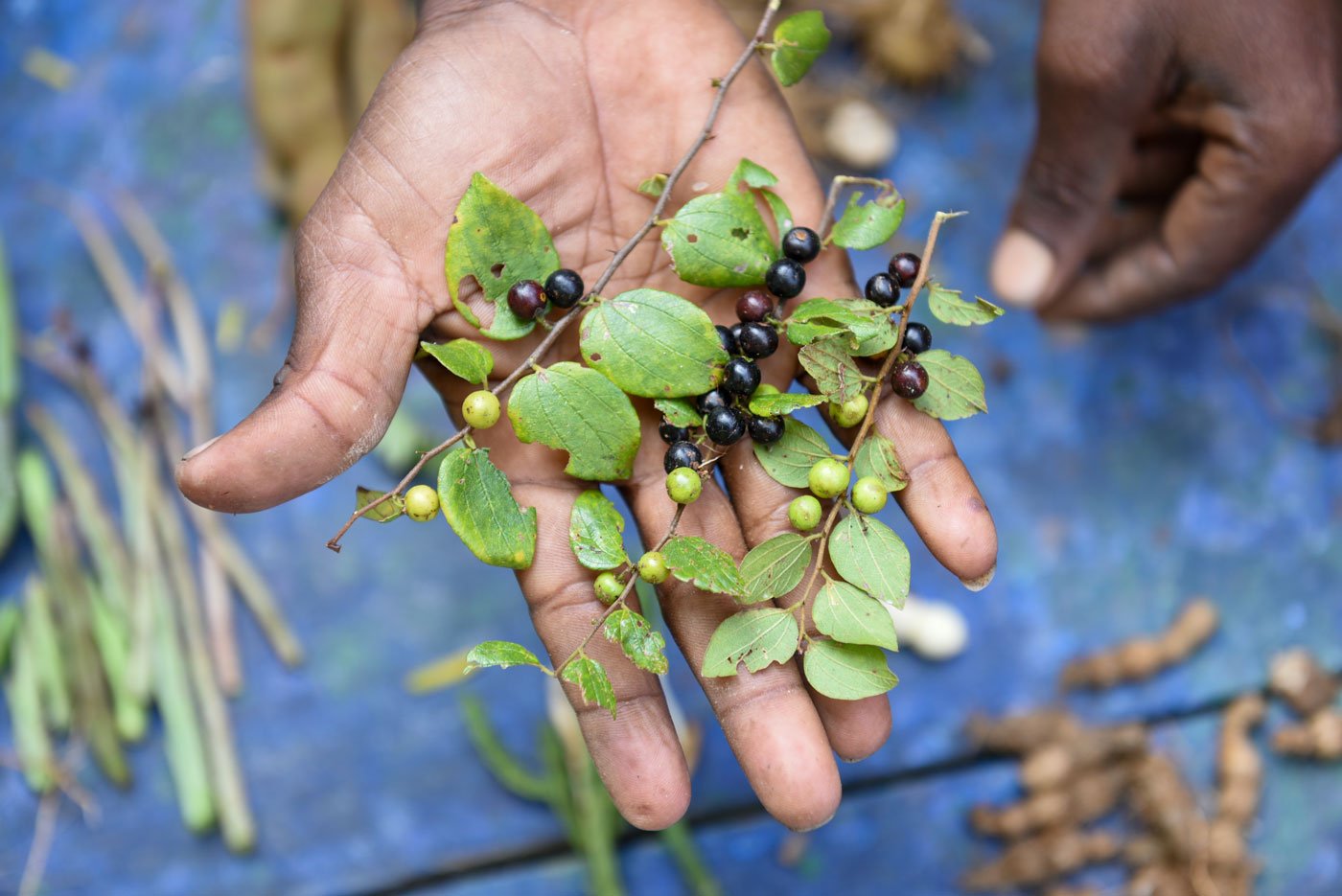 Digging up buried treasures in Bangalamedu

Edible wild plants have for long been a source of food for the Irulas, an Adivasi community in Tamil Nadu. But with receding forests and uncertain work options, they now hope education will bring better days

There is much excitement when Krishnan chances upon the sweet fruit with soft white skin. He opens it, revealing its bright pink-red insides. And when 12-year-old R. Rajakumar eagerly takes a bite, his lips turn bright red too – so he and the other kids have named the thappaattikalli the ‘lipstick fruit’. The other children follow, chomping into the fruit, their mouths turning red. A visit like this to the forest is always exciting for them.

Guiding them that late December morning are G. Manigandan, 35, and K. Krishnan, 50. They lead the way deeper into the scrub forests near Cherukkanur village, clearing the vines and creepers, and using a crowbar to dig out the root climbers. The five children – ranging in age from a 1.5 year old toddler to a 12-year-old – as well as their guides, are all Irulas.

That Sunday morning, they are looking for kaattu vellikizhangu , a tuber-climber. “You can eat it only in specific months [in December-January]. It has to be tender, otherwise it will itch when you eat it,” Manigandan explains. “We have to first identify the stem from the rest of the bushes. The thickness of the stem will tell us how big a tuber to expect and how much deeper to dig to get it out whole.” It’s while looking for this tuber that they come across the lipstick fruit (locally also called nadhelli pazham ).

Then, after a few minutes of looking around, they find a suitable kaattu vellikizhangu climber and dig out a tender root. The kids, following and observing all along, eagerly peel its skin and munch on it.

By noon the group, who had set out at nine in the morning, returns to Bangalamedu, the Irula settlement of Cherukkanur, located around three kilometres from the village in Tiruttani taluk of Thiruvallur district in Tamil Nadu. 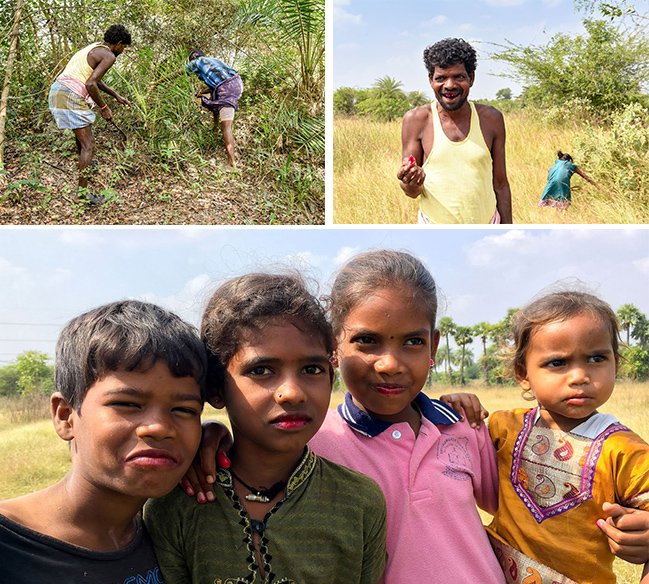 Top row: Manigandan and Krishnan find a kuttikizhangu climber in the forest; Krishnan's teeth turn red from the 'lipstick fruit'. Bottom: For the Irula children of Bangalamedu, the red-staining fruit is a delight

Manigandan and his friends show me some of the vegetables and fruit they have collected from the forest. Besides the kaattu vellikizhangu , they have brought back kuttikizhangu , eaten as a snack; konkipazham , a sweet fruit; thamarai kizhangu , plucked from ponds and cooked like a vegetable; maatu kalimulaam , which leaves a sweet aftertaste when you drink water after eating it; and kozhi kalimulaam , which can be very filling. Some of these are consumed almost exclusively by the Irulas.

The kozhi kalimulaam is especially useful when they set out for the forest around 7 a.m. without carrying any food, and return by 5 or 6 p.m. “It is quite filling and can be eaten raw. You will not feel hungry for many hours,” says Manigandan.

Many regularly journey into the forest to look for these edible roots, fruits, tubers and medicinal herbs – which for long have been the community’s traditional source of food and medicine. The herbs, roots, flowers and bark are also useful for treating common ailments, explains Manigandan. For example, allithamarai , a water lily, and thamarai kizhangu , a lotus root, can calm stomach problems like ulcers when boiled and eaten, and the c hinna elai , a small leaf, is used to treat rashes caused by insect bites. 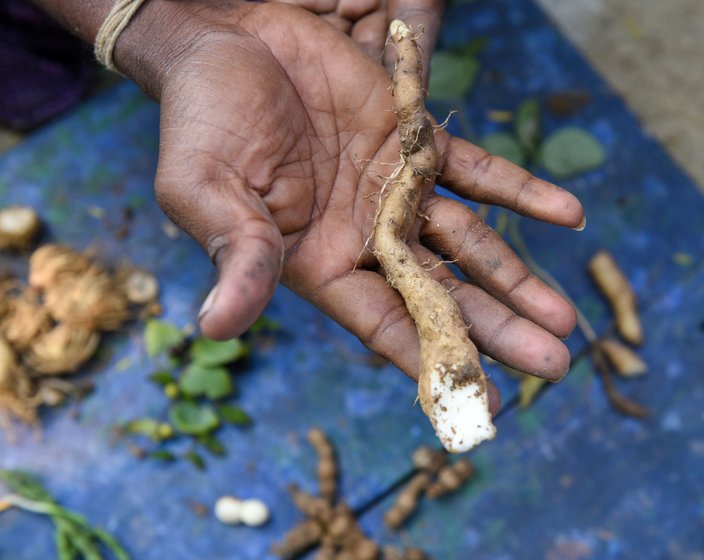 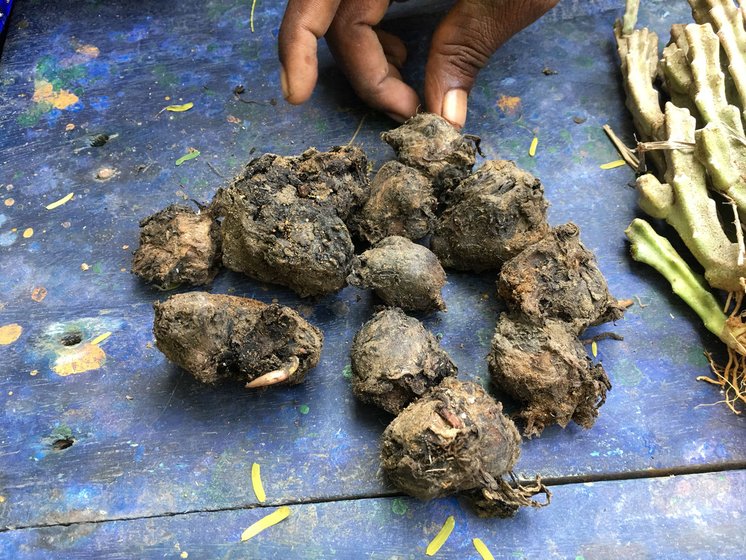 The Irulas are listed as a Particularly Vulnerable Tribal Group (PVTG) by the Ministry of Tribal Affairs, and are one of 75 PVTGs in the country and of six in Tamil Nadu. They live in several pockets across the state, including in the Nilgiri hills and in settlements in the plains, often isolated from non-tribal parts of villages.

In 2007, around 15 Irula families moved from Cherukkanu village to Bangalamedu hamlet (over time, 35 families have moved here) after a feud with the rest of the village says Manigandan, who manages an after-school learning centre in the settlement, run by an NGO. Most of the dwellings in the hamlet are tiny mud huts, though 12 are pucca houses constructed by the NGO after several homes were washed away during heavy rains in 2015 and 2016.

No one in Bangalamedu has completed school beyond Class 10. Manigandan has studied up to Class 8 at the Panchayat Union Middle School in Cherukkanur, as has Sumathi Raju, another teacher at the learning centre. Krishnan has never attended school. Many others have left school after Class 8, because the state-run higher secondary school is in another village around five kilometres away. Moving to a new school is hard for many students, explains Sumathi, and the children must walk alone for two kilometres to board an autorickshaw or bus, which their families usually cannot afford.

Hunting small animals and searching for edible plants both call for sharp observation skills and a deep understanding of animal behaviour, their habitats, and local seasons

Watch video: ‘Our people used to eat this and survive’

With limited education, the Irulas’ work options are curtailed too. They usually labour for daily wages on small construction sites in Cherukkanur or in nearby panchayats and sometimes in Tiruthani town, around 12 kilometres away. They work on paddy farms, harvest sugarcane and bamboo, and water orchards. Some cut savukku trees, used for construction. Others labour at brick or charcoal kilns spread across Tiruthani taluk . All the work is seasonal and unpredictable, and they earn on average Rs. 300 a day for around 10 days in a month. At times, the women in the community also work on state-run MGNREGA sites for around Rs. 170 a day, where their work includes planting saplings, digging canals and clearing wild bushes.

One or two families in the community have started keeping goats for milk, which they sell in nearby markets. A few fish in the nearby shallow lakes. And at times, farm owners engage the Irulas to rid their fields of rats, who steal the paddy and store it in long tunnels below the ground. The Irulas use smoke to flush out the rats from these tunnels and capture them in nets. They use its meat in sambhar , and get to keep the paddy retrieved from the tunnels.

With limited incomes, the forest remains a source of vegetables and meat for the Irulas. “Whenever we are out of work, we go to the forest for food. We also hunt small animals,” Manikandan says. “We look for rabbits, snails, squirrels and some varieties of birds.” Some try and occasionally sell rabbit meat for Rs. 250-300, he adds. “One must be very lucky to catch a rabbit. It could even take a week to 10 days to catch one. On rare days we could end up with even 2 or 3 in a single day. Rabbits don’t venture out into the open. We have to chase them out of the thick bushes using long staffs, so they run into our traps. But rabbits can see well even under moonlight. They notice the thin metal wire of the trap and avoid running into it. So we venture out on amavasai night, when there is no moon in the sky, to catch them.” 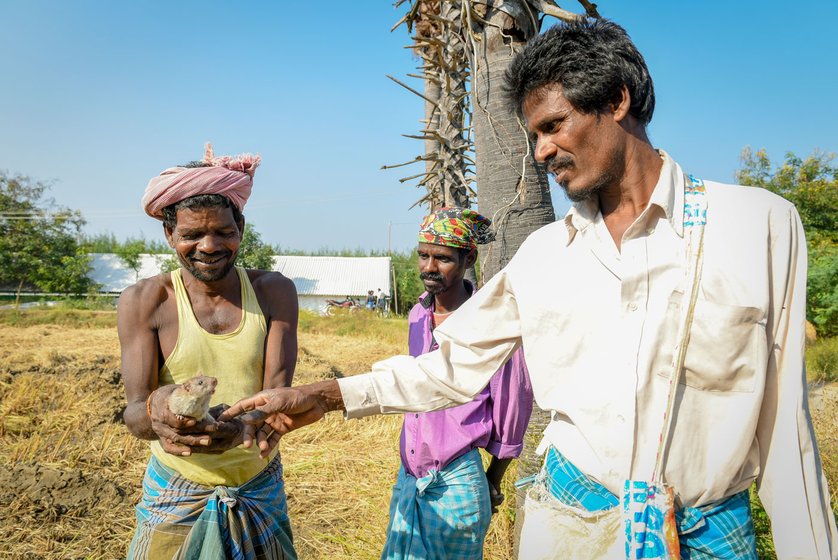 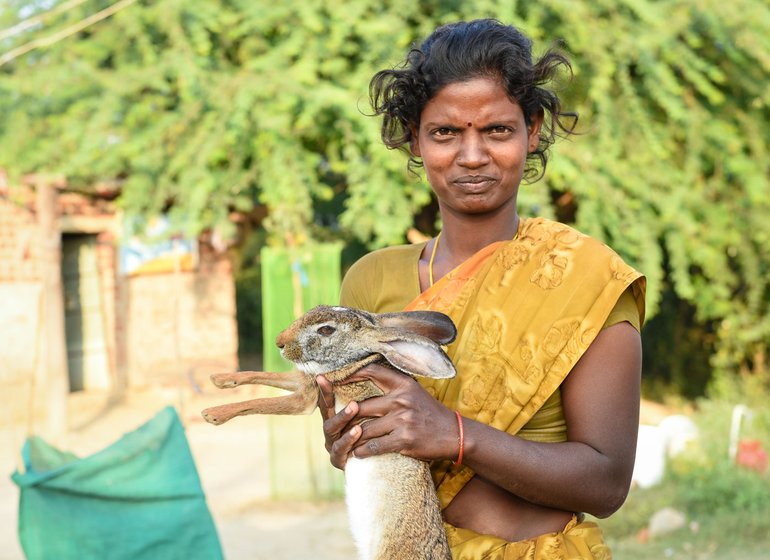 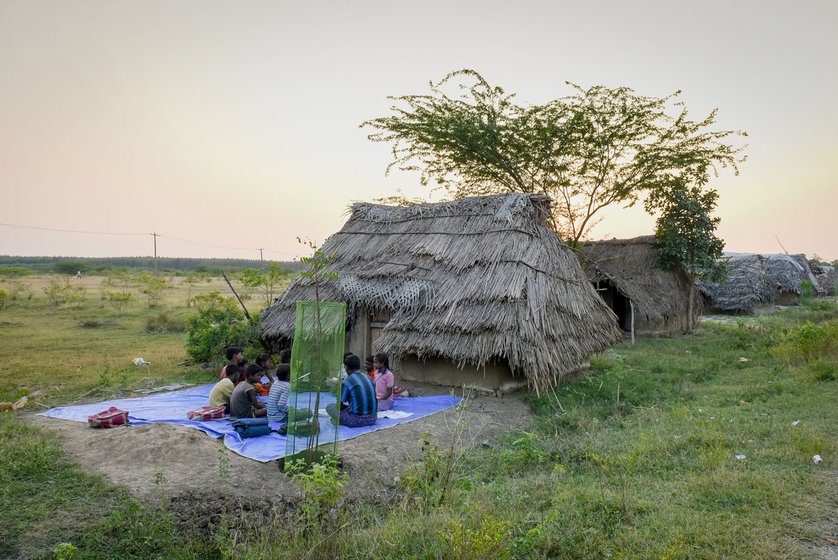 Left: Krishnan and companions with a rat they caught from its tunnel in a paddy field; at times farm owners engage the Irulas to rid their fields of rats . Centre: M. Radha with a dead rabbit she and her husband Maari caught after a full day's effort. Right: The learning centre for children run by G. Manigandan

Hunting small animals and searching for edible plants both call for sharp observation skills and a deep understanding of animal behaviour, their habitats, and local seasons. This knowledge has been passed on over generations among the Irulas – just as from Krishnan and Manikandan to the children who accompany them that Sunday. “We wait for weekends and school holidays. That is when our parents allow us to go with them into the forest,” says 13-year-old R. Anusha, a Class 8 student in the panchayat school in Cherakkanur.

But the thick scrub forests – once the main source of firewood, food, medicine and livelihood for the Irulas – have been shrinking over the decades. In some patches, the forest has been cleared for farms or mango orchards; some parts have been converted into plots for housing; and in some places, non-tribals from Thiruvallur district have claimed ownership of the land by fencing the area and forbidding the Irulas from entering.

With the receding forest and uncertain work options, many in the community hope better education will give their children better options. Despite the difficulties in reaching high school, many in the Irula community of Bangalamedu are trying to study further. At Manigandan’s learning centre, his 36-year-old sister K. Kanniamma, who arrives for a visit with her grandkid, a toddler, says “We want our children to study well and get jobs. We don’t want them to be like us, struggling to earn and live.”