No stitch in time for Bengaluru tailors

With no income in the lockdown, Abdul Sattar and other embroiderers in Bengaluru were desperate to return to their West Bengal village. Now, with no work in the village, Sattar is desperate to come back to the city

It’s been over four months since Abdul Sattar left Bengaluru, driven out by the lockdown.

“We will leave somehow, even if there is a delay,” he had said. That was when Cyclone Amphan was about to make landfall, on May 20. Still, Abdul and his friends were prepared to brave the long 1,800-kilometre journey home to Chak Lachhipur, their village in Paschim Medinipur district of West Bengal.

It had been barely a few months since Abdul had come to Bengaluru from Mumbai, sometime in January or February, he says. His wife Hamida Begum, 32, a homemaker, and their children, Salma Khatun, 13, and Yasir Hamid, 12, live in a small three-room house in their village in Ghatal taluka. His family owns 24 dismil (a quarter acre) of land, on which his brother cultivates paddy.

Abdul had left school after Class 8 and started learning embroidery, like most others in his village. Since then, he has been on the move, working in Delhi for a few years, and later in Mumbai, visiting home once every 5-6 months. “I do machine embroidery. I was not finding much work in Mumbai, so I decided to work with my cousin,” he said.

Abdul, 40, joined the small tailoring business that his cousin, 33-year-old Hasanullah Sekh (name as spelt on his Aadhaar card), had set up in south Bengaluru. He shared a single room with five others, all from Chak Lachhipur – the six men all worked in Hasan’s shop as tailors and embroiderers. 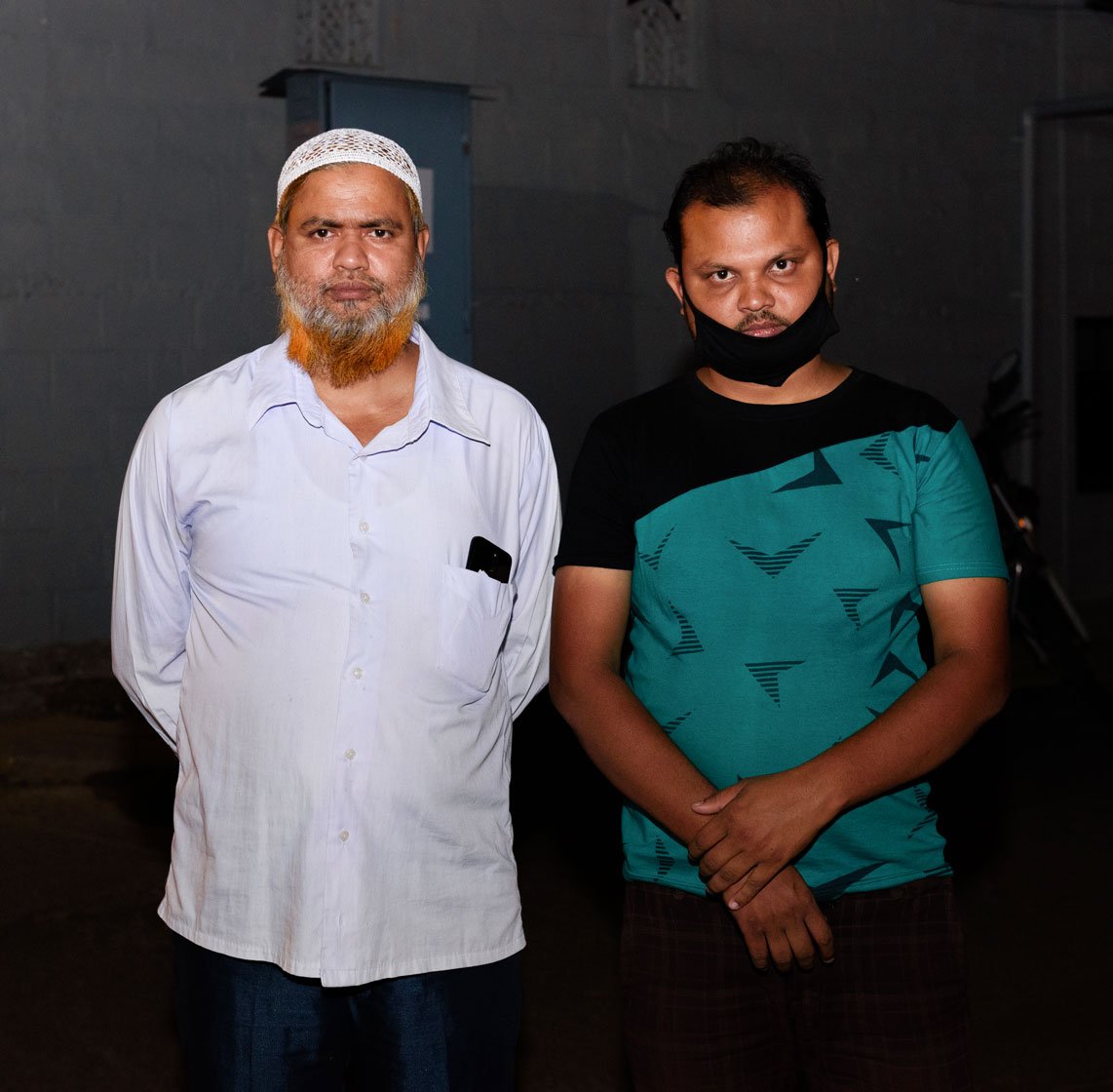 Despite the uncertainty, Abdul Sattar, who does machine embroidery (left) and his cousin Hasanullah Sekh (right) were prepared to brave the 1,800-kilometre journey home to Chak Lachhipur village

Hasan had lived in Bengaluru for 12 years, with his wife and six-year-old son. He and his team were looking forward to the peak wedding and Ramzan season during April and May. “We get a lot of orders during these months,” he said. The season would have fetched each worker around 400-500 rupees or more per day. Each of them expected to earn at least Rs. 15,000-16,000 in a month, and Hasan would have made Rs. 25,000, after all the expenses.

“Most of us manage with Rs. 5,000-6,000 for our rent and living expenses, and send the rest home,” Abdul said. “I have to run the house, pay for my children’s schooling expenses. I also contribute some money towards my parents’ health and living expenses.” (His parents live with his elder brother; they are four brothers and one sister. The eldest brother, who cultivates paddy, suffered huge losses after cyclone Amphan flooded their fields.)

But Abdul had worked for barely two months in Bengaluru when the lockdown was announced. With their business shut, rations soon began running out. “We could not step out,” Hasan said. “All shops were shut in our area. We did not know where we could go to buy food. Luckily for us, there is a masjid nearby. Volunteers there started giving us two meals a day.”

“There are many people from our village and nearby places who are here in Bangalore,” Abdul had told me. “All of them are in the same line of work – tailoring and embroidery. Usually 5-6 share a room. We found that many of them didn’t have any provisions or money left.” Citizen volunteers, he said, also helped with rations. “We too did our little bit by distributing what was supplied to us to those we knew. The police allowed us to travel on bikes seeing that we were only helping others.” 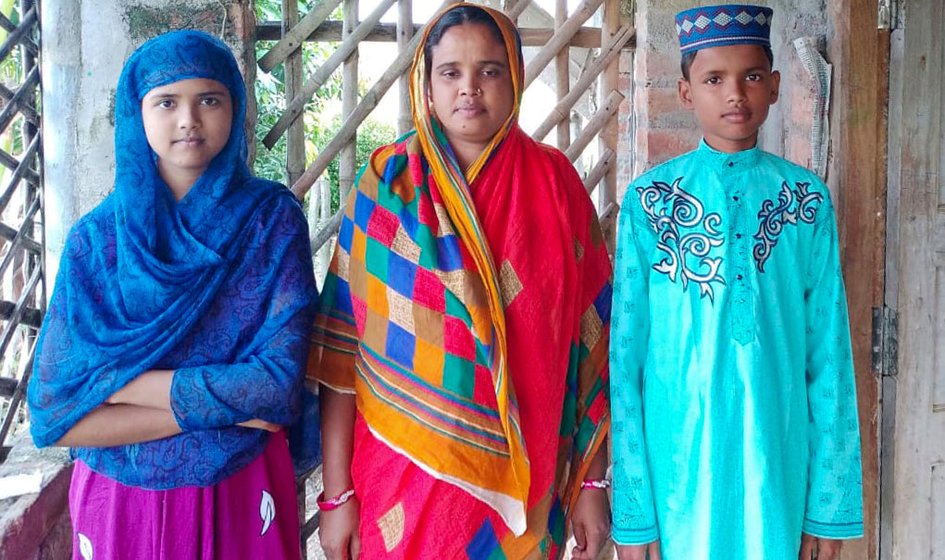 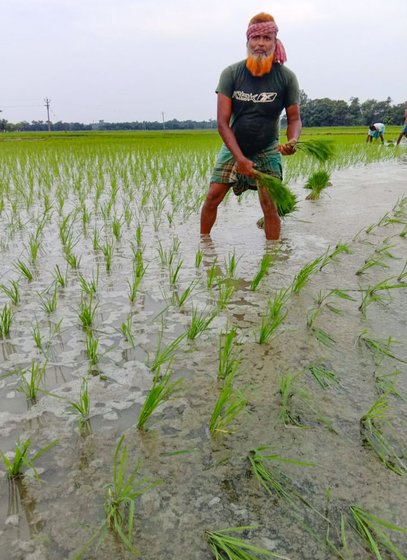 After returning home to his wife Hamida and children Salma and Yasir, Abdul worked as a farm labourer to manage expenses

With no income for two months and uncertainty about the situation, Abdul, Hasan and their fellow villagers became desperate to return to Chak Lachhipur. “How long can we rely on others for help?” Hasan had asked. “If we go back, our relatives are all there, at least our food will be taken care of.”

“We just want to go back now,” Abdul had said. “Our family back home wants us to return too. We cannot afford to fall sick here. One of our relatives died in Mumbai with this corona fever, away from family and relatives. Imagine if something like that happens to us, here! There will be no family to take care of us. Now, our mind is set.”

But getting back home proved to be uphill. There was a lot of confusion about where to apply for permission, whether they needed a pass to enter West Bengal, and when the trains would leave. Despite poor internet access, they eventually managed to fill a mandatory travel form on the state government’s Seva Sindhu website. Then they waited for 10 days for approval by sms.  Abdul also visited the nearby police station to register their travel request.

“I am fasting and it is getting difficult to wait for long hours in front of the police station in this sun,” he had told me. With uncertainty about trains and fear that even an approved pass might expire before they secured a seat, the group decided to explore other options. Private vans were charging Rs. 70,000 for five people. One bus operator asked for Rs. 2.7 lakhs for the journey. 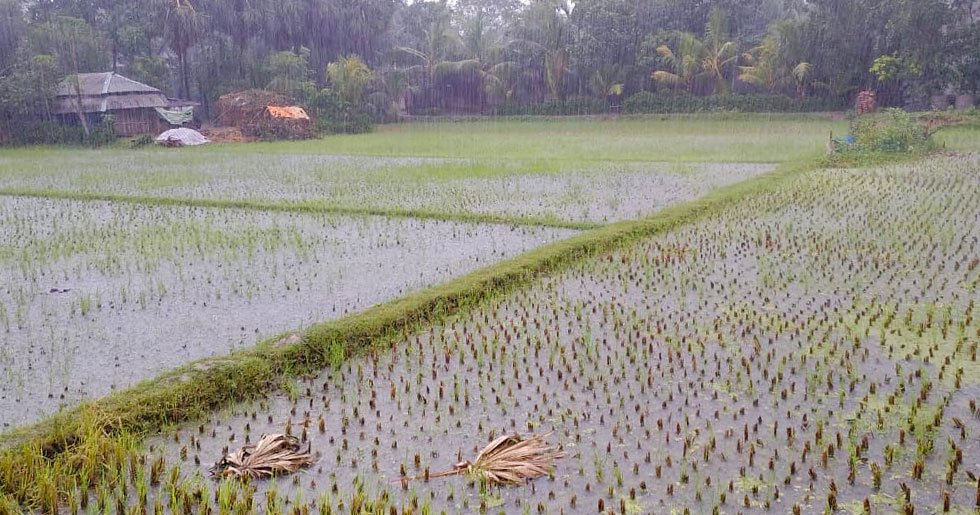 After a lot of effort, Abdul and Hasan finally managed to arrange a bus ( see cover photo on top ). “Someone in our village runs a bus service, and we had to convince him very hard to send us the bus,” Hasan told me in May. “They arranged for all our passes and permissions from Bengal. We have gathered a group of 30 people, all of us from the same village, all working in the same embroidery and tailoring business. We will be paying Rs. 1.5 lakhs. Some of the boys had to pawn jewellery and land for this. The bus arrives tomorrow morning and we will be on our way.”

The group could not leave as planned the next day because the bus got delayed at the Andhra Pradesh border. They finally left after a day’s delay, on May 20, the day Cyclone Amphan made landfall in West Bengal. After several delays at various check-posts, the bus reached Chak Lachhipur village on May 23. Once home, Abdul and the others spent two weeks in isolation in their small houses.

When they left, Hasan and his family vacated their home in Bengaluru, but he retained the shop space with its sewing equipment, and the room where the workers stayed. The owner adjusted the two months advance of Rs. 10,000, against the pending rent for April and May. She agreed to wait for him to return and then pay the rent for the months after May.

In the first week of September, Hasan returned to Bengaluru. But though the lockdown has eased, work has not looked up, he says. “Even if we open the shop, we don’t expect anyone to come for embroidery work or big stitching work for some more time. Business is going to be dull for a while. Ours is a small business. We cannot afford to live in the city without money coming in every day.”

Abdul is still back in his village, where for about 25 days he found work on paddy fields for a daily wage of Rs. 300. He says he is managing all household expenses with his savings, and with the earnings from those few days of farm labour. “Now no work is available at all in the village. That is why we left in the first place,” he adds. “We must return [to Bengaluru]."

But with Covid-19 cases on the rise in Bengaluru, Abdul is apprehensive. “Based on what Hasanbhai says, I will plan my travel. We cannot continue like this without an income. We cannot stay away for long [from embroidery work]. We will return. Once things settle down, we will return.”