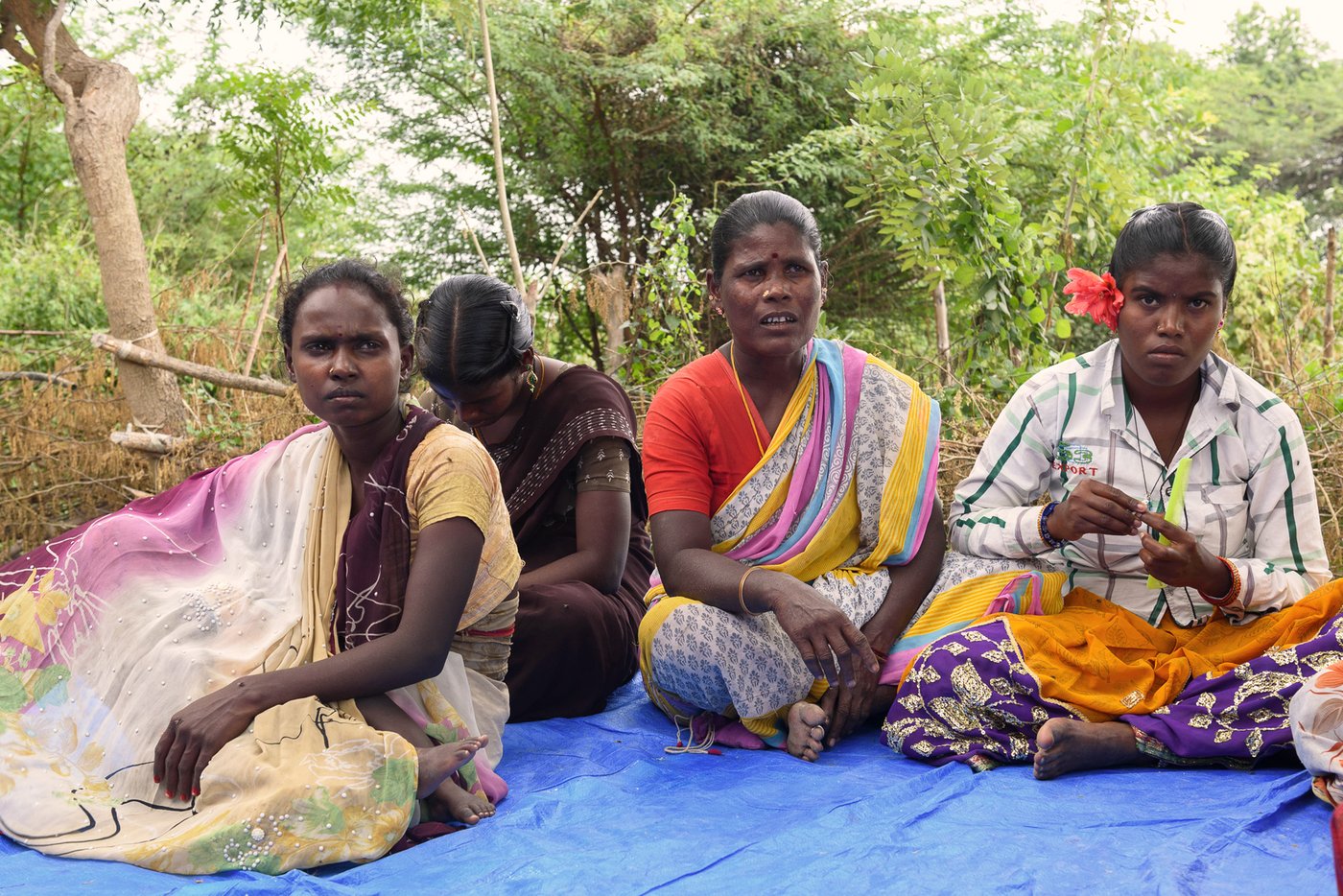 Bangalamedu: ‘Where are the jobs for women?’

Irula women of Bangalamedu hamlet in TN's Thiruvallur district are very dependent on the MGNREGA. But fewer days of work, delayed payments and an alienating digitisation process cause them huge problems

“It is never 100 days. Just 50 days so far this year, that’s all,” said R. Vanaja.  She was sitting on the ground in the sparse shade of a velikathan maram tree in Bangalamedu hamlet, along with around 18 women and 2-3 men. They were discussing noor naal velai (hundred days’ work), as they call  MGNREGA jobs in Tamil, trying to make sense of their wages, on a December morning in 2019. Vanaja is around 20, and like most adults in this colony of 35 Irula families, works as a daily wage labourer.

But all these jobs are seasonal and unpredictable. During the monsoon, on days when they cannot find any work, the Irulas – listed as a Particularly Vulnerable Tribal Group in Tamil Nadu – manage without any income at all, and hunt in nearby forests for small animals to eat, or look for fruits and tubers to add to their meals (see Digging up buried treasures in Bangalamedu and On a different route with rats in Bangalamedu ).

And for women, even those dispersed jobs are rarely available. Sometimes, they work with their husbands at nearby brick kilns, starting from January-February till around May-June. But the work is intermittent, and a wife-husband pair at most earns Rs. 6,000 across the season. 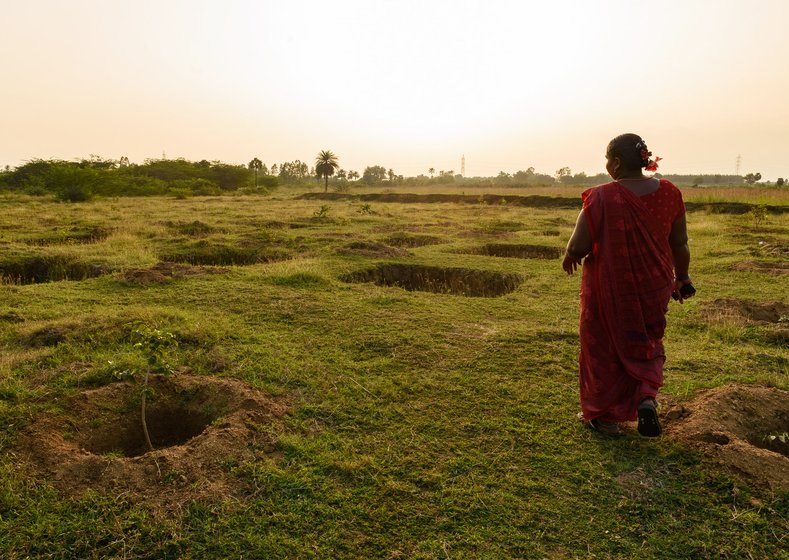 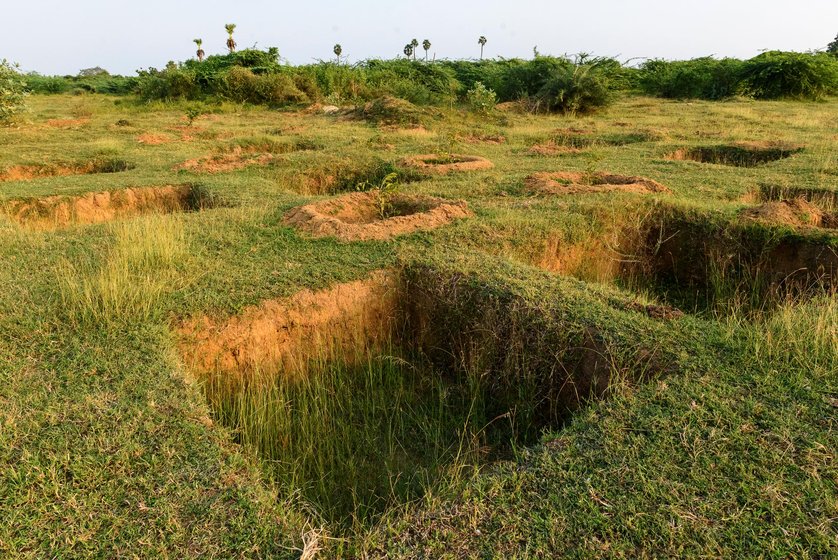 ' Where are the jobs for women?' asked S. Sumathi; here she is standing at w ater absorption pits dug on a dried lake bed, and a few tree saplings planted in them as part of MGNREGA water conservation projects in Cherukkanur panchayat

At times, the women pluck groundnut crops for around Rs. 110-120 a day, or, along with their husbands, they clean and separate groundnut pods and pack them – earning Rs. 400-450 for this as a pair. But this work too is rare.

On the whole, for wage work, the women rely heavily on MGNREGA.

“Where are the jobs for women?” asked S. Sumathi, 28, Vanaja’s neighbour, who lives in a mud and thatch house with her husband K. Sriramulu, 36, a daily wage labourer. “ Noor naal velai is our only job.”

MGNREGA , or the Mahatma Gandhi National Rural Employment Guarantee Act, 2005, entitles every rural household to at least 100 days of work in a year.

The group sitting under that maram ( Prosopis juliflora ) tree did a name-count and told me that among Bangalamedu's 35 families, 25 women (and 2 men) have NREGA job cards. “They call us for eri velai [lake work],” Sumathi added, using the local term for these tasks – mainly, digging canals and trenches, weeding dry lakebeds, or at times planting saplings along roads.

But MGNREGA work is irregular too, and so is the income. Data for Cherukkanur panchayat shows that the average number of days of work has been falling steadily over the last three years – the people of Bangalamedu don’t know why, but think it might be because few new projects are being launched by the panchayat . In 2019-20 (financial year), it was just 49.22 days per family, the data show – down from 93.48 in 2016-17. 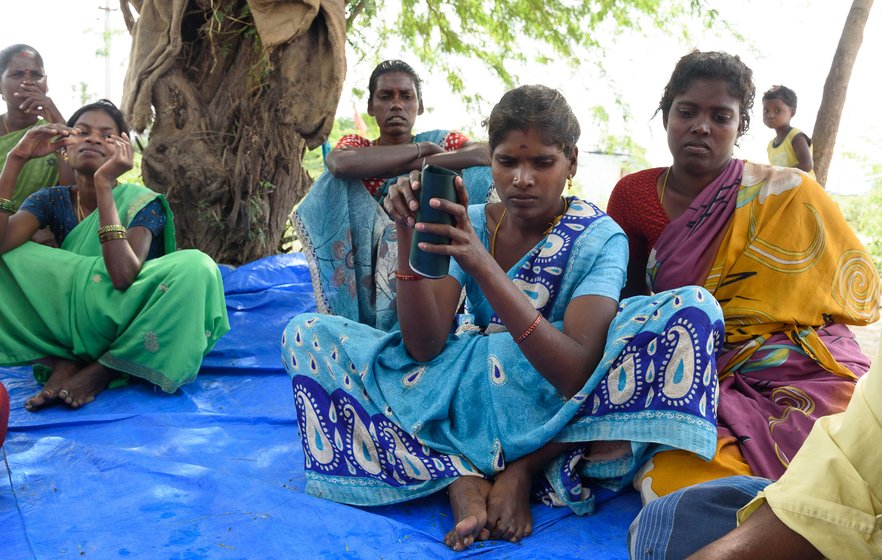 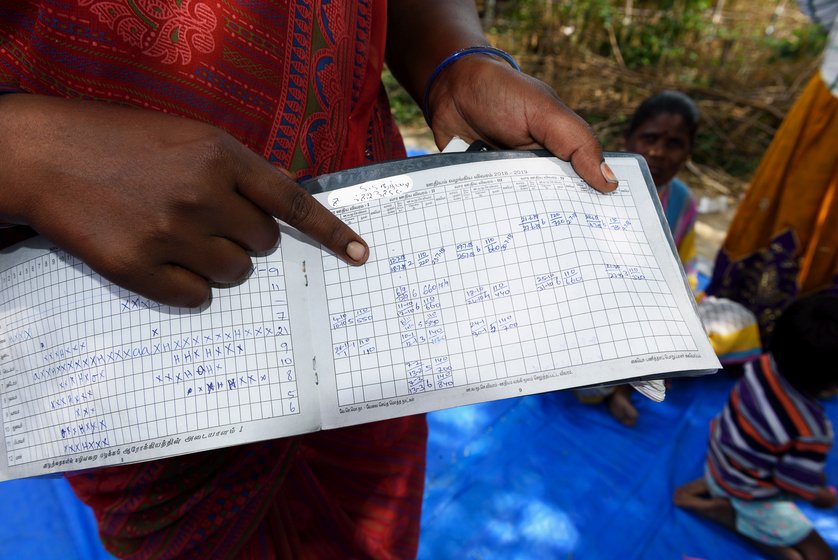 Left: The women of Bangalamedu, an Irula colony in Cherukkanur  panchayat, discuss MGNREGA wages. Right: S Sumathi's job card; the attendance and wage details on most of the cards in this hamlet don't tally with the workers’ estimates

“We have worked for even 80-90 days a year before. It is not like that anymore,” said Vanaja. Her household – with her husband, R. Johnson, 21, and their three-year-old son Sakthivel – runs mainly on her noor naal velai wages. Most of Johnson’s income as a labourer is spent on paying instalments for a secondhand motorbike they purchased.

But between mid-October 2019 and April 2020, Vanaja found only 13 days of MGNREGA work. During those months, the family had to rely on Johnson’s wages. “What he earned, we spent it on household expenses,” said Vanaja.

Besides, the minimum daily wage – Rs. 229 (for 2019-20) for MGNREGA work in Tamil Nadu – is recorded as only Rs. 140-170 on the job cards. S. S. Nithya, 31, from Ramakrishnapuram hamlet under Cherukkanur panchayat , who is the panidhala poruppalar (PP), the local supervisor, for Bangalamedu, said she did not know why the wage is less than what’s mandated.

"The overs decides how much each person will work and the amount has to be paid for that work,” she said. The ‘ overs ’ is the engineer – at times referred to as ‘ oversaar ’ or ‘ oversamma ’. “If they are digging pits, the overs decides the measurement, number of pits and the amount for that work. Or if they have to dig a canal, then overs fixes the measurement and payment.” 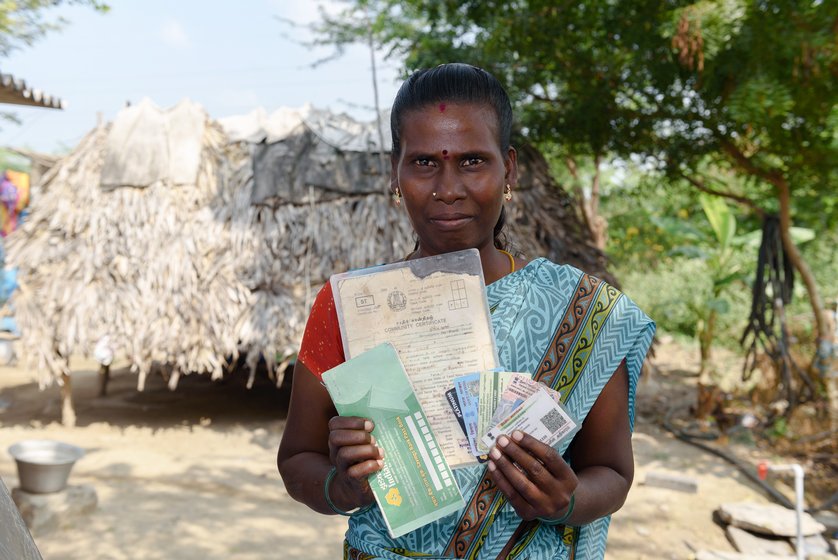 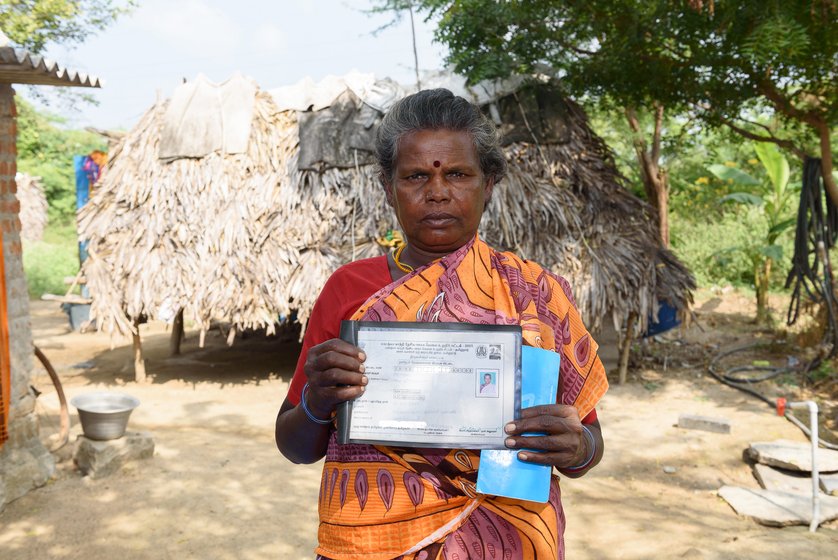 Left: M. Mariammal has ensured all documents are in place so as to not lose out on any benefits. Right: V. Saroja with her MGNREGA job card, which she got in 2017

Job cards are supposed to help workers keep track of attendance and wages. Workers bring along these cards to the sites, and the PP has to mark attendance every day. But these details on most of the job cards in Bangalamedu do not tally with the workers’ estimates

This may be because the worker has forgotten to bring along the card, or the PP has not filled it. The PP also maintains a register, which is more regularly filled, and sent to a computer operator at the Block Development Office in Tiruttani, where the attendance data is placed online – this is done after MGNREGA wage transfers became digital (credited directly into bank accounts) in 2017.

Before the turn to digitisation, the PP used to also fill wage information in job cards at the time of handing over cash wages. “When we got our noor naal velai wages in cash, we knew how much we were getting every week. Now it comes to the banks. If we had gone to school, we could tell how much we get,” pointed out 43-year-old V. Saroja.

The digital version , uploaded at the Block Development Office, with updated attendance and wage details, is publicly accessible but not within easy reach of the Irulas. Many do not own phones, or don’t have internet access. And limited familiarity with the online world makes it difficult to navigate complex forms and webpages. 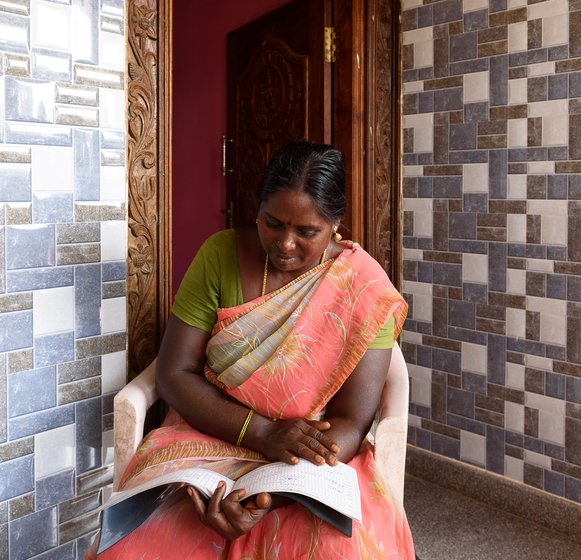 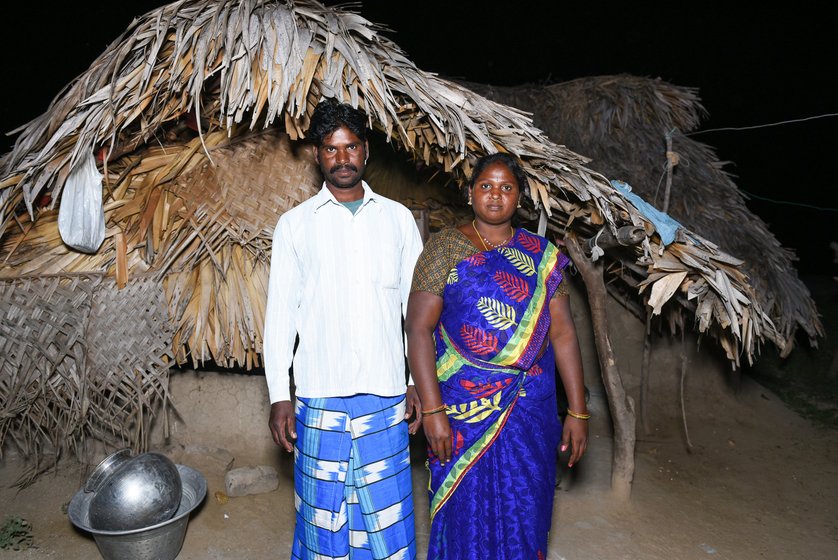 Left: G. Sumathi, a local supervisor in the past, e xplained that if there are larger numbers of people looking for MGNREGA work, it takes longer for a team of 20 to get their turn, and that may be why fewer days of work are available. Right: S. Sumathi (not the same person) and her husband K. Sriramulu; when the lockdown eased, she used the Rs. 5,000 saved from her MGNREGA wages to set up a small shop outside her house

So job cards now get updated only after workers check their bank accounts, confirm the details, and inform the PP. “If we fill wage information [on the card] before payments are received, it is misleading,” explained S. S. Nithya. “Entry will show that people got their money, but that money may not have come into the bank yet. People have complained about it.”

For Bangalamedu’s Irulas, checking their bank balance involves time and thereby a loss of wages. “To go to our bank [in K. G. Kandigai panchayat, four kilometres from the hamlet], we have to walk three kilometres to the main road. From there we catch a share-auto or bus and it costs 10 rupees each way,” said Sumathi. “If the money has not come, we have to go again.” At times, they take motorbike rides with locals. “But we must give them 50 rupees for petrol,” said 44-year-old V. Saroja.

To improve access, banks have introduced ‘mini-banks’. The Canara Bank, which the Irulars use, has one such ‘Ultra Small Branch’ in Cherukkanur panchayat . But that too is roughly four kilometres away, and operates only on Tuesdays. They can check their balance and withdraw up to Rs. 10,000 from these units. Anything higher, and they have to visit the main branch in K. G. Kandigai. 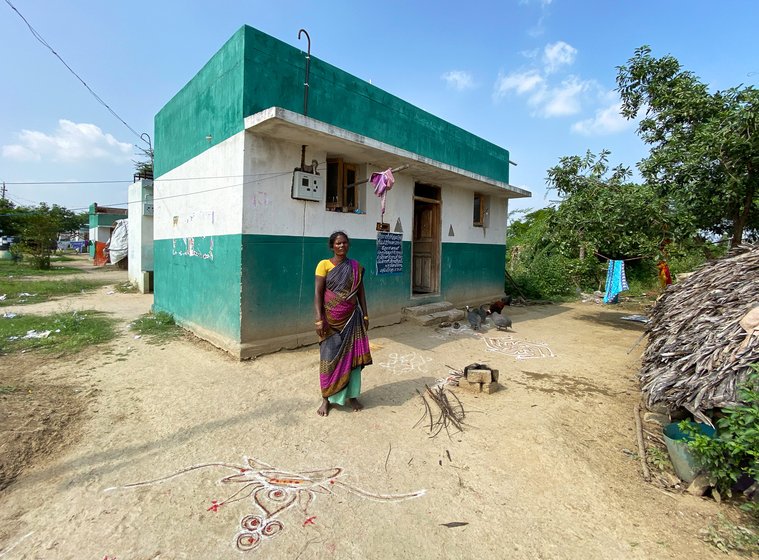 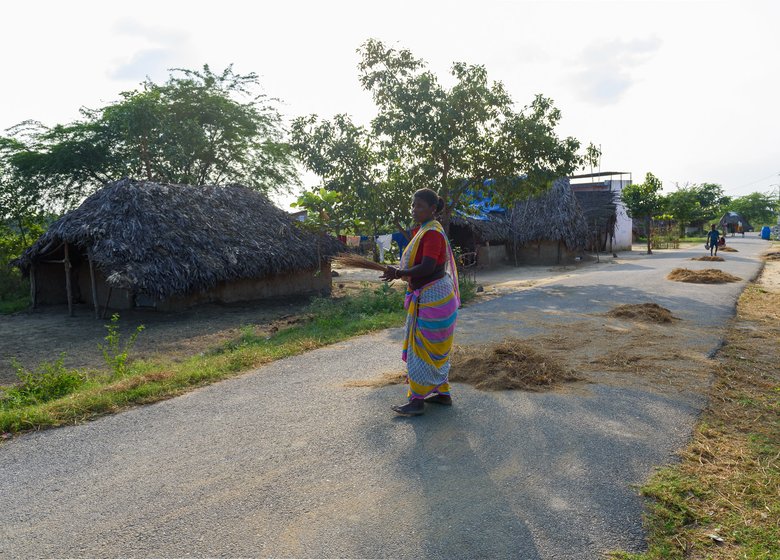 At times, the wage amount the Irula women count on withdrawing from their accounts fall short, as it did for K. Govindammal  (left) when she constructed a house under the Pradhan Mantri Awas Yojana, and it's been the experience of other women too in this hamlet of Irulas (right)

The mini-bank’s payment system operates on Aadhaar-based biometrics. “The machine never reads my thumbprint,” said Sumathi. “I keep wiping my hand but it never works. So I have to go to the Kandigai bank and use the ATM card.”

The bank also offers a phone banking facility to check the last five transactions. But Sumathi and others are unaware of this service. “How do we do that on our phone? We don’t know," she said. Still, she added, the direct bank transfers are beneficial too. “When there’s cash in hand, we can’t track how it gets spent. Now we just leave our noor naal velai money in the bank.”

At times, the amount the Irula women count on withdrawing from their accounts falls short of their calculations. This was  K. Govindammal’s experience. Govindammal, now around 40, lost her husband 20 years ago, has three grown children, and lives alone. In 2018-19, under the Pradhan Mantri Awas Yojana, she received Rs. 170,000, and was entitled to claim MGNREGA wages for the days when she worked on constructing her own house instead of going to a work site. She used her wages, for around 65 days of work she did on the house, to offset the labour costs for the mason. But instead of a deposit of Rs. 15,000 that she was expecting, she found only Rs. 14,000 in her bank account. Besides, the actual cost of building a house is more than the amount granted through the Yojana and NREGA wages put together, and at times the cost of building material also goes up. So the flooring of Govindammal’s pucca house remains unfinished. “I don’t have the money to complete it,” she says.

In 2019, Saroja too tried to work on building her own her house instead of eri velai work. The year has gone by, but there is no sign of her payment against her MGNREGA wages. “The officer has assured help. Let us see,” said Saroja in May. “If money from eri velai doesn’t come, how will I pay the mason? I lose out on regular work too.” Since then, she has received just Rs. 2,000 as MGNREGA payment, though she estimates she worked for a month  on her house and should receive at least Rs. 4,000-5,000. 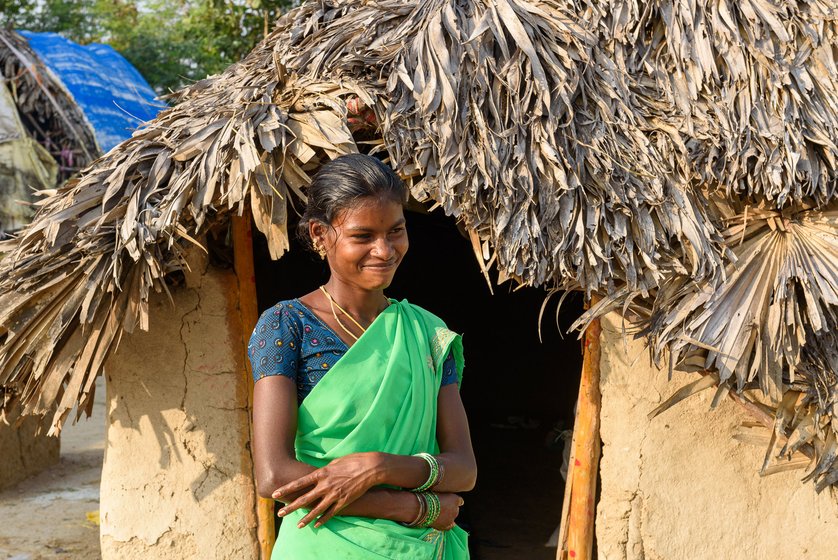 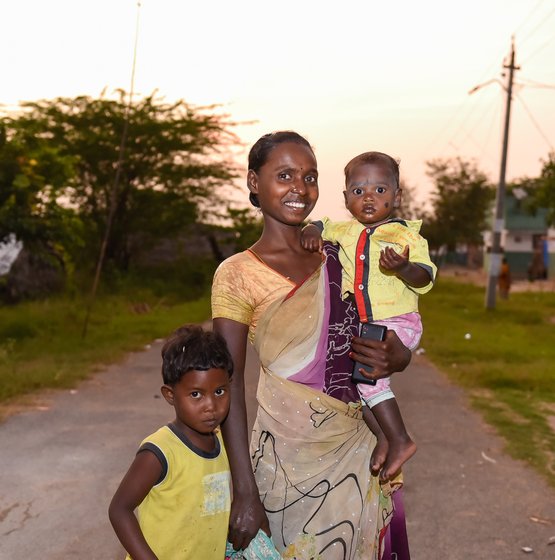 Left: A. Ellamma, 23, stopped going to MGNREGA work when her child was born 2.5 years ago. Right: M. Ankamma, 25, with her two children. On her job, many entries are missing for both attendance and wages

Despite the hurdles, MGNREGA has given the women of Bangalamedu an avenue to earn up to Rs. 15,000-18,000 a year. And after the lockdown began in March 2020 and other sources of livelihood dried up, MGNREGA work saw the families through.

Sumathi had been saving her wages of several weeks for contingencies such as house repairs and medical expenses. But when the lockdown eased,  in May, she instead used her Rs. 5,000 savings to set up a small shop outside her house selling soap, chilli powder and other essentials. (During the lockdown, with no shop in their hamlet, the Irulas depended completely on basic rations provided by the government, panchayat leaders, NGOs and others).

“There is no work, no money at all,” Sumathi had said in early April, with brick kilns and other sites shut. By the last week of that month, work on MGNREGA sites restarted in the hamlet, easing the strain a little in Bangalamedu’s tightrope finances.