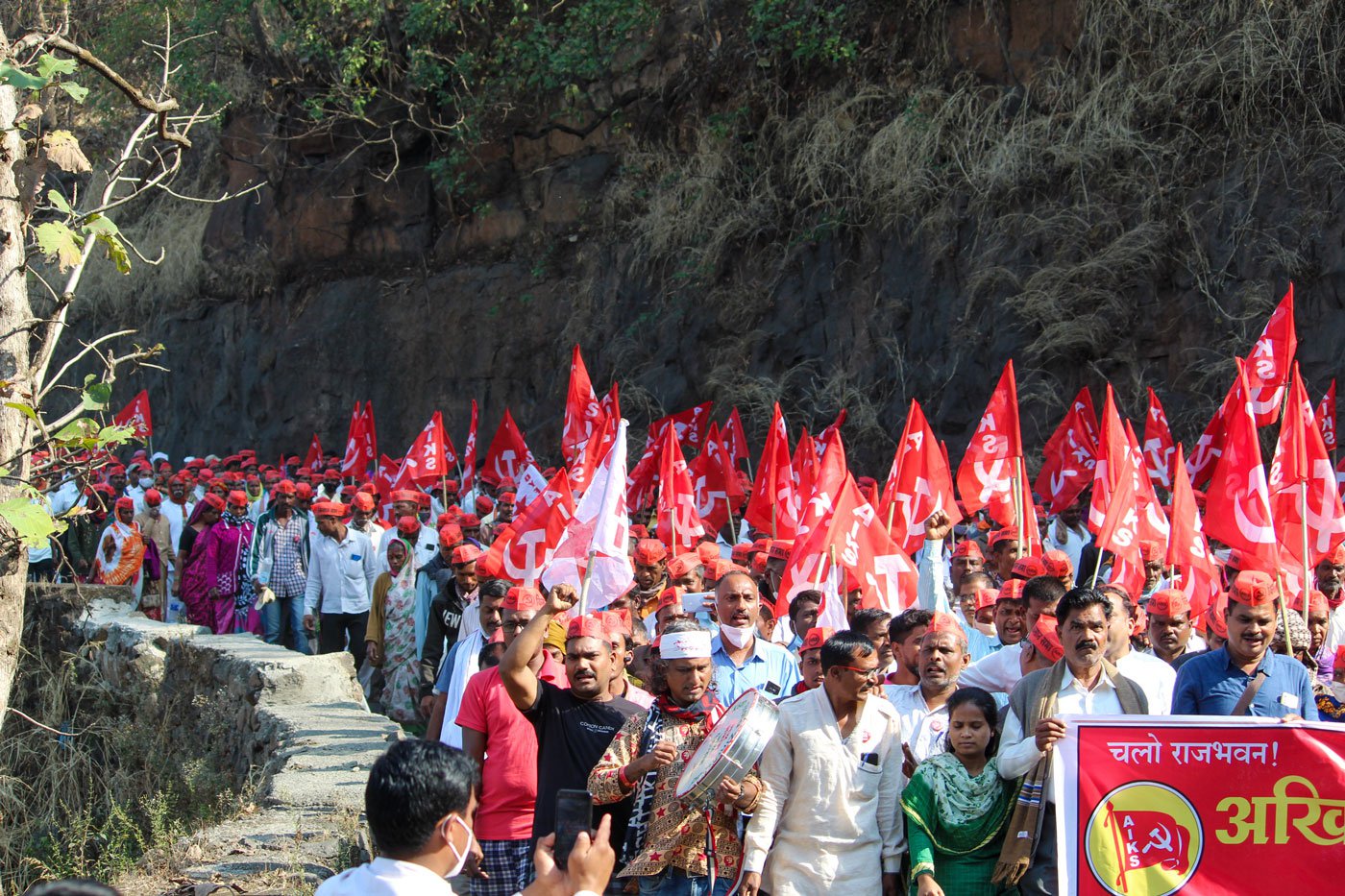 ‘We have marched before, we will march again’

Farm workers like Vijaybai Gangorde and Tarabai Jadhav, from Nashik district, borrowed money to join the thousands of farmers coming to Mumbai to express solidarity with the Republic Day protest rallies in Delhi

“We borrowed a 1,000 rupees from the seths [farm owners] to come here. In return, we will work in their fields for 4-5 days,” said Vijaybai Gangorde, 45. She arrived in Nashik on January 23 at noon, in a tempo painted blue and orange – one of the first to reach the Golf Club Maidan in the city, to join the vehicle jatha (march) to Mumbai.

Vijaybai’s 41-year cousin, Tarabai Jadhav, was also travelling with her from Mohadi, their village in Nashik district’s Dindori taluka . They both work as farm labourers there for a daily wage of Rs. 200-250.

The cousins came to Nashik to join other farmers – about 15,000 from mainly Nanded, Nandurbar, Nashik and Palghar districts of Maharashtra – going to Mumbai’s Azad Maidan, about 180 kilometres away, to protest against the new farm laws. “We are marching for our upajivika [livelihood],” said Tarabai.

A sit-in and a march to Raj Bhavan, the Governor’s residence, in south Mumbai have been organised by the Samyukta Shetkari Kamgar Morcha on January 25-26, to express solidarity with the protesting farmers at Delhi’s borders. Farmers from 21 districts of Maharashtra, assembled together by the All India Kisan Sabha (AIKS), are gathering in Mumbai for these protests. 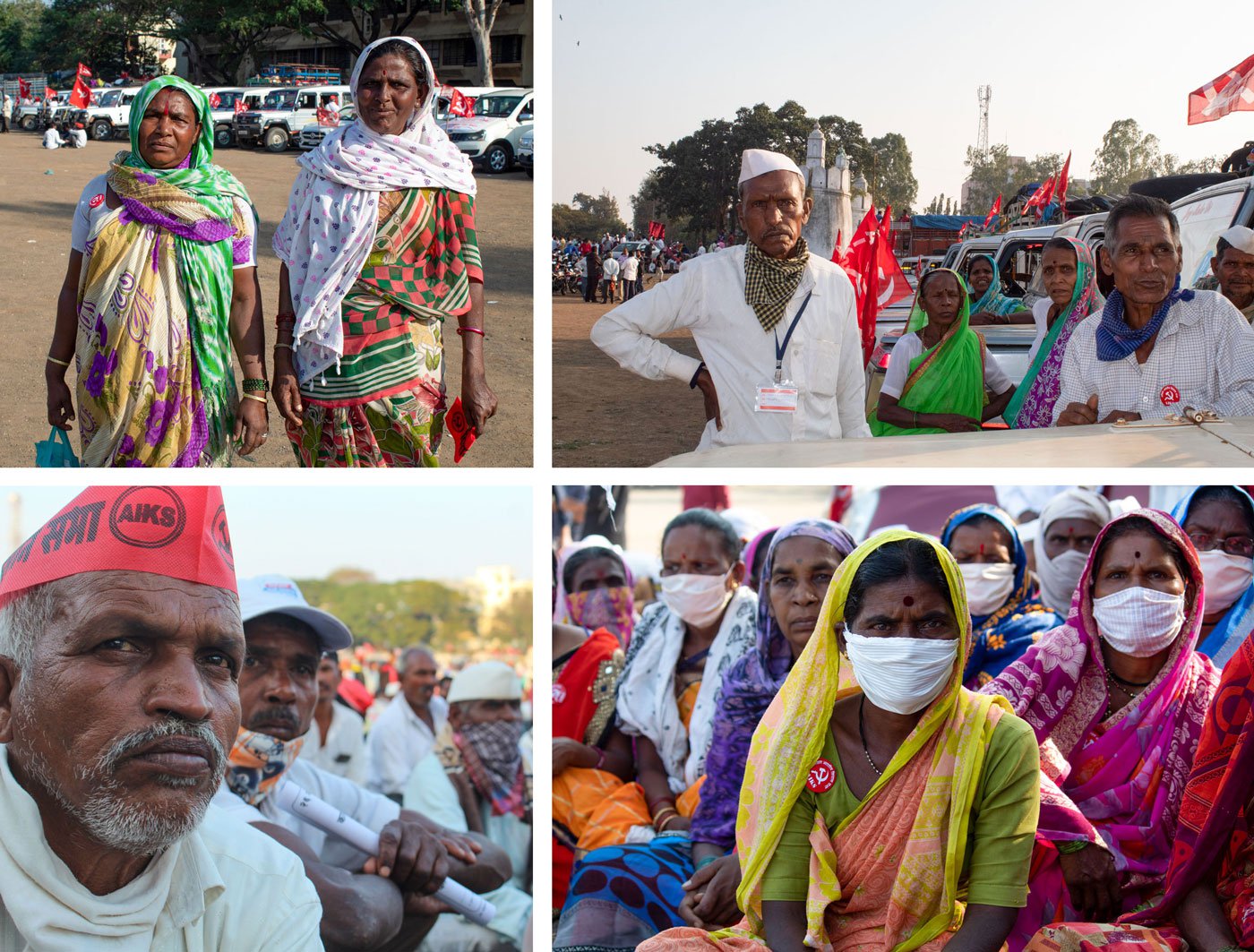 Top left: Vijaybai Gangorde (left) and Tarabai Jadhav in Nashik. Top right: Mukunda Kongil (wearing a cap) and Janibai Dhangare (at the back, in blue saree) are worried about their children's future. Bottom: About 15,000 farmers gathered from villages of Nashik and surrounding districts to go to Mumbai

For over two months, lakhs of farmers, mainly from Punjab and Haryana, have been staging protests at five sites on the borders of Delhi. They have been protesting against three farm laws that the central government first issued as ordinances on June 5, 2020, then introduced as farm bills in Parliament on September 14 and hastened to become Acts by the 20th of that month.

The laws are: The Farmers’ Produce Trade and Commerce (Promotion and Facilitation) Act, 2020 ; The Farmers (Empowerment and Protection) Agreement on Price Assurance and Farm Services Act. 2020 ; and The Essential Commodities (Amendment) Act, 2020 .

The farmers see this legislation as devastating for their livelihoods by expanding the space for large corporate to exercise even greater power over farming. They also undermine the main forms of support to the cultivator, including the minimum support price (MSP), the agricultural produce marketing committees (APMCs), state procurement and more. The laws have also been criticised as affecting every Indian as they disable the right to legal recourse of all citizens, undermining Article 32 of the Indian Constitution.

Vijaybai and Tarabai, who belong to the Koli Malhar Adivasi community, a Scheduled Tribe, paid Rs. 1,000 each for a seat in the hired tempo to Mumbai and back. They borrowed the amount because they had no savings. “We had no work during the [Covid-19] lockdown,” said Tarabai. “The state government had promised 20 kilos of wheat free for each family, but only 10 kilos was distributed.” 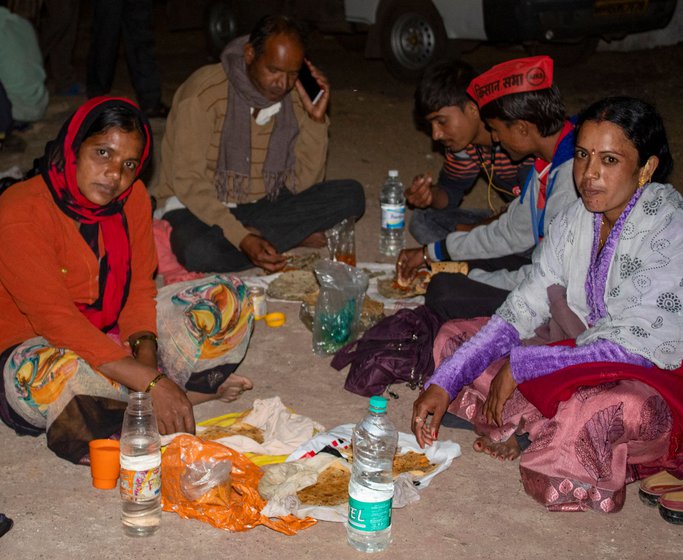 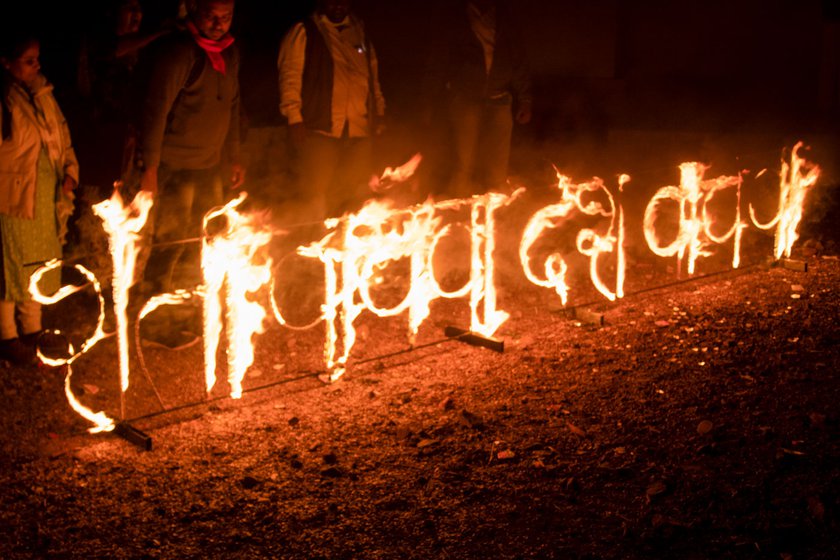 Left: Many had packed a simple meal from home for dinner. Right: At night, the protestors lit up the slogan 'Save Farmers, Save Nation'

This is not the first time that Vijaybai and Tarabai are marching in protest. “We had come on both the marches – in 2018 and 2019,” they say, referring to the Kisan Long March from Nashik to Mumbai in March 2018, and the follow-up rally in February 2019, when farmers voiced their demand for land rights, remunerative prices for produce, loan waivers and drought relief. It is also not the first jatha from Nashik to protest against the new farm laws. On December 21, 2020, around 2,000 farmers had collected in Nashik, of which 1,000 set out to join their northern counterparts on the outskirts of Delhi.

“The only way we Adivasis can be heard is by marching [for our rights]. This time, too, we will make our voices heard,” said Vijaybai, making her way with Tarabai to the centre of Golf Club Maidan, to listen to the speeches of AIKS leaders.

After all the vehicles had assembled, the convoy left Nashik at 6 p.m. that evening. At Ghantadevi temple in Igatpuri taluka , Nashik district, the marchers halted for the night. Many of them had packed a simple meal – bajra rotis and garlic chutney – from home. After dinner, they spread out thick blankets over tarpaulin sheets on the ground beside the temple and fell sleep.

Azad Maidan was 135 kilometres away. 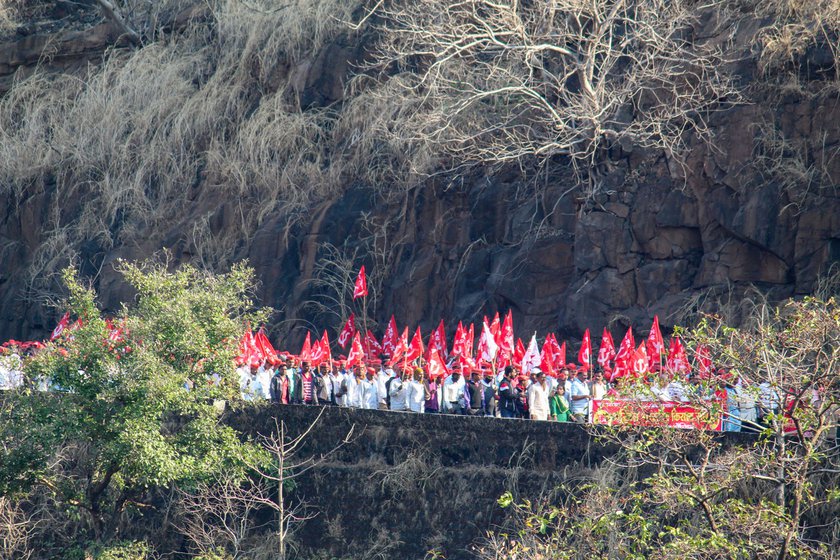 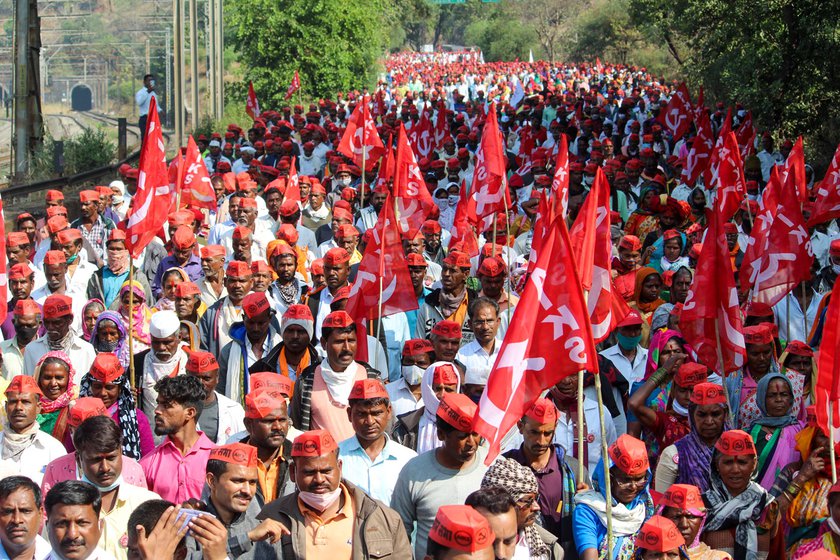 The next day, the plan was to walk down the Kasara ghat near Igatpuri and reach the Mumbai-Nashik highway. As they prepared to leave at 8 a.m., a group of farm labourers discussed their children’s future in the agriculture sector. “Even though my son and daughter have both completed their degrees, they’re working on farms for a meagre income of Rs. 100-150 [per day],” said 48-year-old Mukunda Kongil, from Nandurkipada village in Trimbakeshwar taluka , Nashik district. Mukunda’s son has a BCom degree, and his daughter has done a BEd, but they both work as farm labourers now. “The jobs go only to non-Adivasis,” says Mukunda, who belongs to the Warli (or Varli) Adivasi community, a Scheduled Tribe.

“My son worked so hard in his college and now he works on farms every day,” said 47-year-old Janibai Dhangare, also a Warli Adivasi from Nandurkipada. “My daughter finished her pandhravi [Class 15, that is, a BA degree]. She tried to get a job in Trimbakeshwar, but there was no work for her. She did not want to leave me and go to Mumbai. That city is too far and she will miss home-cooked meals,” she said, packing away her leftover bhakris and loading her bag into the tempo.

The farmers and farm labourers walked for 12 kilometres from the ghat to highway with their flags, raising slogans against the new farm laws. Their demand is for a repeal of the three laws as well as of the new labour codes, while also seeking a law to guarantee remunerative minimum support prices (MSP) and countrywide procurement facilities, said AIKS president, Ashok Dhawale. “This march is an important contribution to the historic nationwide struggle of lakhs of farmers in Delhi and all over the country against the neoliberal and pro-corporate policies of the central government,” said Dhawale, who is travelling with the group. 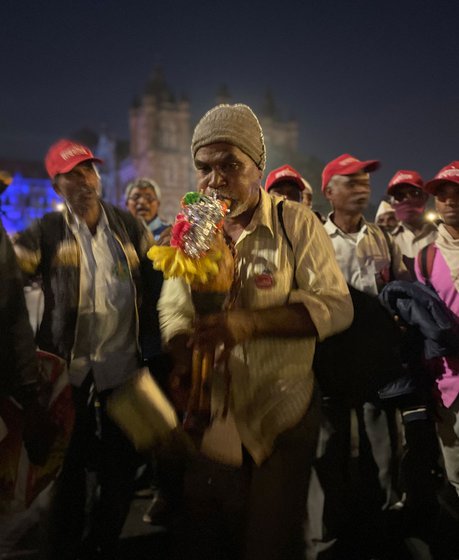 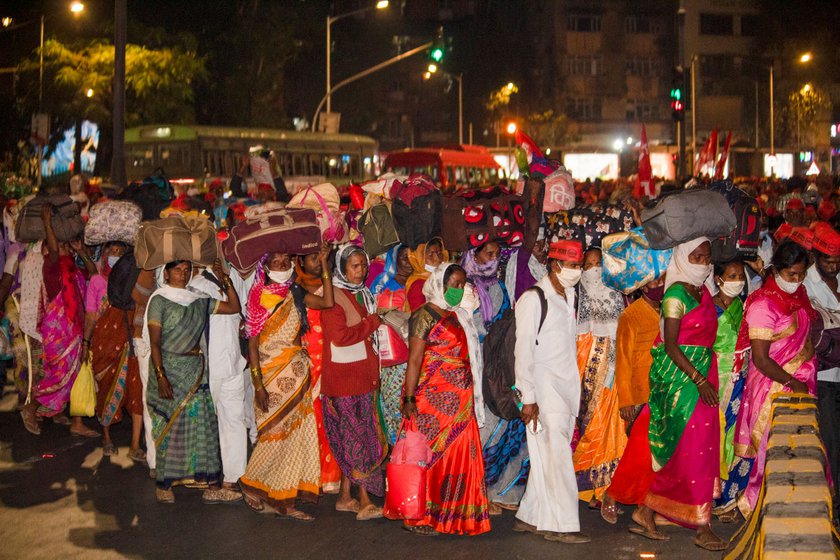 Arriving at night at Azad Maidan in Mumbai, the tired farmers celebrated with the tarpa , a musical instrument (left)

Upon reaching the highway, the farmers took their places in the vehicles and proceeded towards Thane. Along the way, various organisations supplied them with water bottles, snacks and biscuits. They stopped for lunch at a gurudwara in Thane.

It was 7 p.m. on January 24 when the jatha reached Azad Maidan in south Mumbai. Tired, but with their spirits intact, some farmers from Palghar district entered the ground singing and dancing to the tune of the tarpa , a traditional Adivasi wind instrument.

“I am hungry. My whole body is hurting, but I’ll be fine after some food and rest,” said Vijaybai, after settling down with her group of farm labourers. “This is not new for us,” she said. “We have marched before and we will march again.”