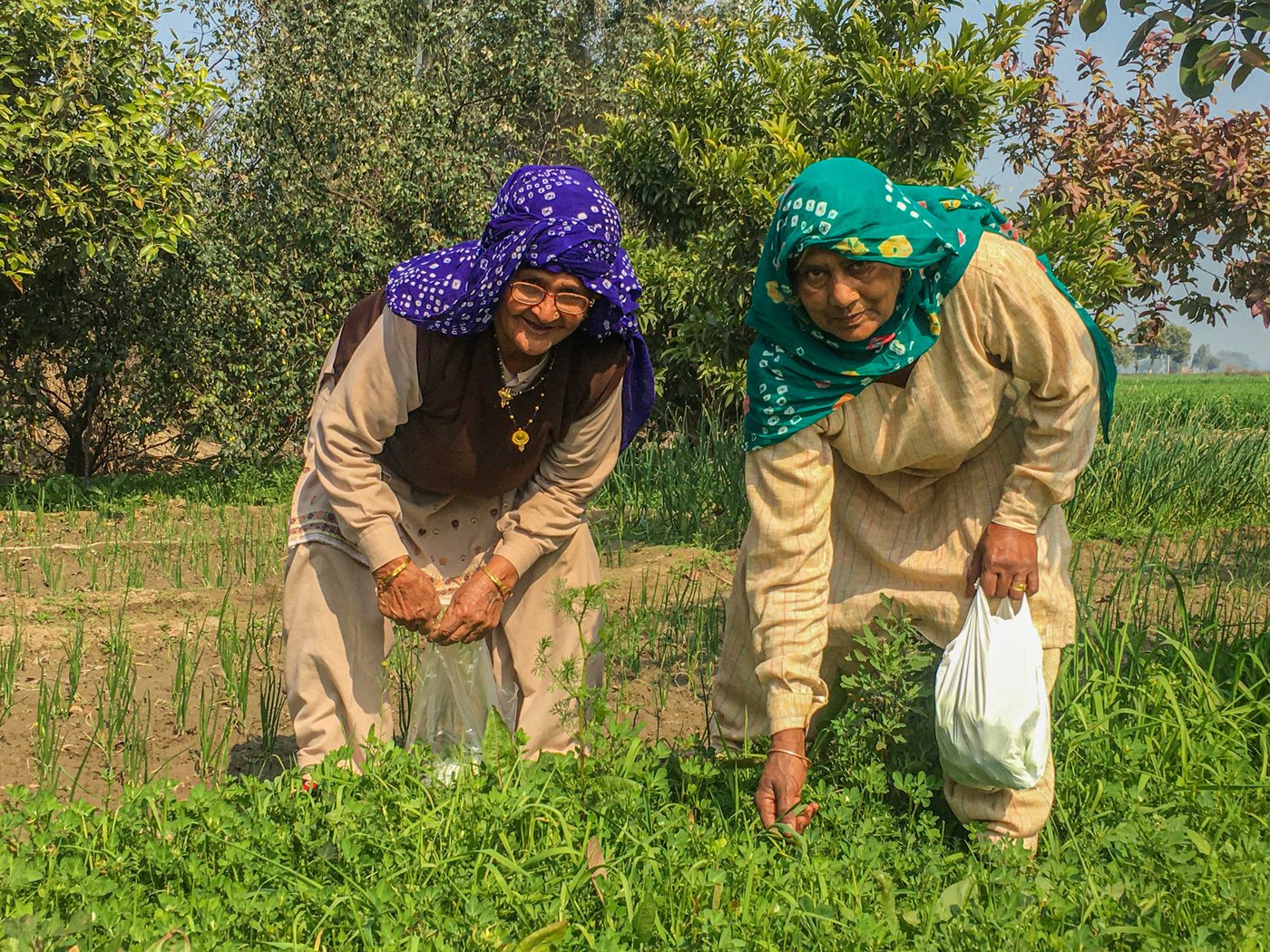 Sonia Petwar, Shanti Devi and other women in Haryana’s Petwar village have been supporting the farmers' agitation in their own way – by sending rations to Tikri and even attending the protests

“A tractor trolley went around the village, asking everyone to give whatever they could to send to the protest site. I contributed Rs. 500, three litres of milk and a bowl of sugar,” said Sonia Petwar, 34, from Petwar village in Haryana’s Hisar district.

It was in mid-December 2020 when the rations were first collected in her village located in Narnaund tahsil. The collection was sent to Tikri, about 105 kilometres from Petwar on the Delhi-Haryana border, for the farmers  protesting there against the Centre’s three new farm laws since November 26.

“I didn’t have enough money. So I gave pieces of wood,” said 60-year-old Shanti Devi, a member of Sonia’s extended family. “It was cold then. I thought, the protestors could light the wood to keep warm.”

The second time that the tractor trolley came around in Petwar was in early January. “Each woman from the village gave something whenever a person was leaving for the protest site,” said Sonia. Women who rear cattle donated milk. It’s been their way of supporting the farmers’ agitation– from behind the scenes.

The farmers’ protests are in the third month now and tens of thousands of protestors – men as well as women – are still gathered at Delhi’s borders – mainly at Tikri and Singhu (Delhi-Haryana border) and Ghazipur (at Delhi-Uttar Pradesh border).

I first met Sonia at Tikri on the afternoon of February 3. She was with a group of 150 women from Petwar – a village of about 10,000 people (Census 2011) – who had come to the protest, but they were getting ready to go back then. “One feels charged after watching the protests,” she told me later, when I visited her in Petwar on February 7. 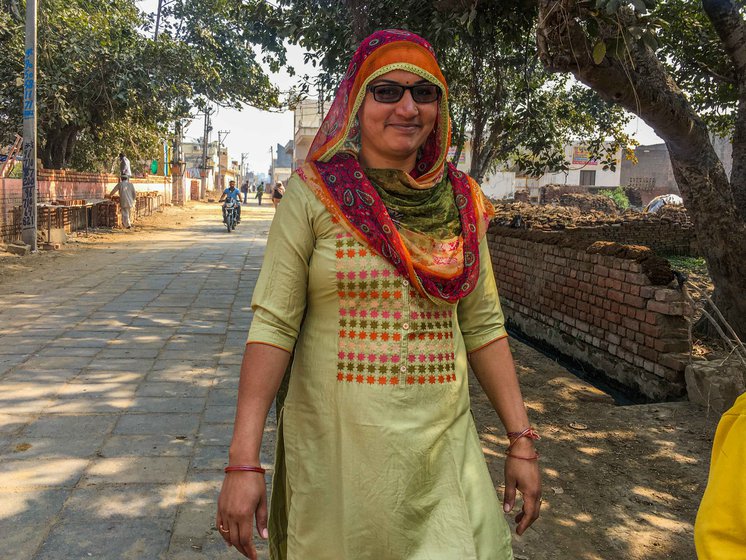 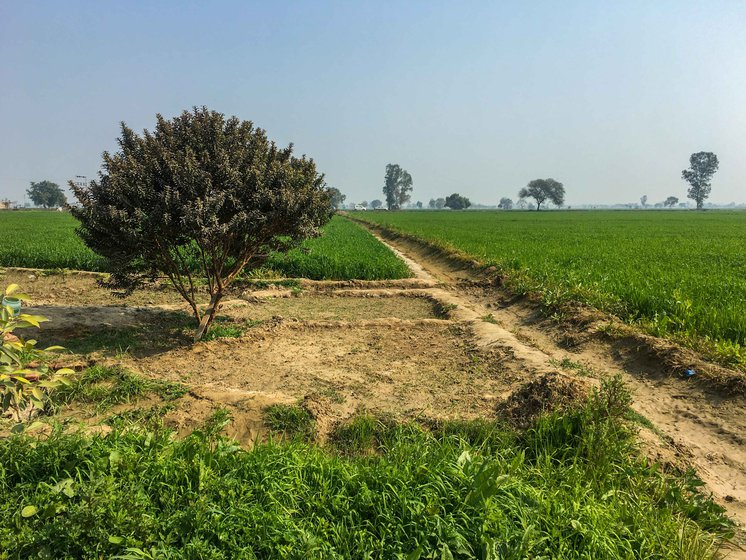 Sonia (left) and her family give their share of land in Petwar village (right) to their relatives on rent. They mainly grow wheat and rice there

“We are now living in a different time, unlike before when women were held back from doing anything,”  Sonia added. “We have to join this struggle. If women back down, how will this movement go forward?”

Women are participating wholeheartedly in this struggle, said Jasbir Kaur Natt, state committee member of Punjab Kisan Union. “Whether by sending pinnis [sweets] from the villages or collecting ration to feed those present here – women are contributing in every way.”

Sonia and her husband, Virender, 43, belong to the landowning Jat community of Haryana. Virender’s father and his five brothers each owned 1.5 acres of land in Petwar. Four of them, including Sonia’s father-in-law, have died and their lands have passed on to their sons. Virender, who deals in real estate, and his brother, jointly own their father’s land now.

“My husband passed away when I was around 20,” said Shanti, the widow of one Virender’s uncles. She was married at 14. “Since then, I have been farming on our share of the land.” Shanti, who lives close to Sonia’s home, was visiting her when I was there. Soon, other women of Sonia’s extended family also joined us.

Vidya Devi, the widow of another brother of Sonia’s father-in-law, told me, “We did everything by hand before. Now most things are done by electricity.” Vidya, who is in her 60s, recalled how their days would begin at 4 a.m. “We would grind the wheat and prepare the flour, then feed the cattle and milk the cows. Then we would prepare food for the whole family.” 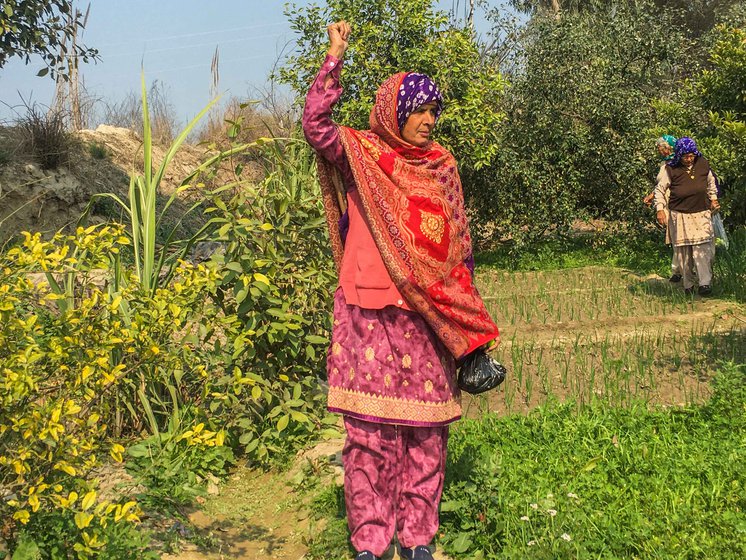 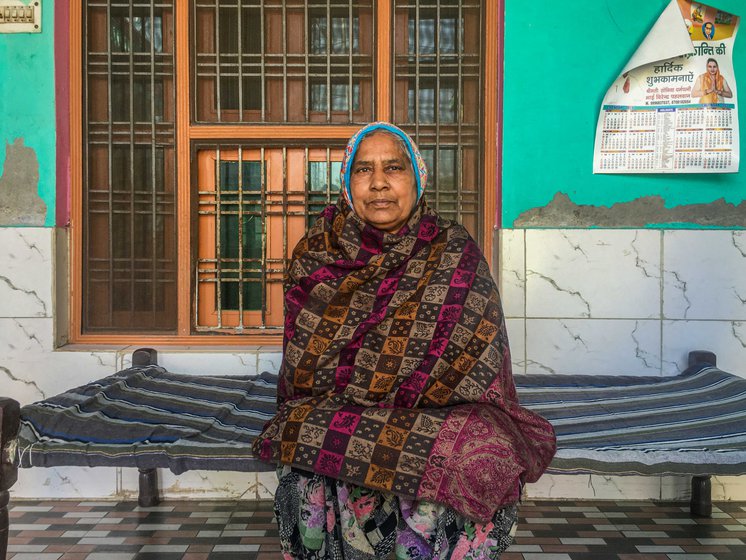 Left: Vidya Devi does not farm anymore, but supports the farmers' protests. Right: Shanti Devi started working on her family's land when she was 20 years old

At 8 a.m. they set out to walk four kilometres to the fields, Vidya Devi said. “We would work there – weeding, sowing and cutting, and return home only by about 6 p.m.” The women would then feed the cattle, prepare dinner, and go to bed by 10 p.m. “The next day, the same cycle would repeat,” she said.

“They would never return from the fields before dusk,” said Sonia, adding that it is easier for women farmers now. “Now there is a machine to cut crops, spray insecticide and pesticide, and the tractors also do a lot. But you still have to spend money on all of it.”

Vidya’s family no longer farms on their 1.5 acre share of land. “We stopped  23 years ago. My husband passed away and I wasn’t keeping well. My son took up his father’s job at the school [as a teacher] after finishing his studies,” she said.

The land owned by Vidya’s family is rented by Shanti and her 39-year-old son, Pawan Kumar. For the last two years, Sonia’s family has also given their 1.5 acres on rent to Shanti and Pawan, at Rs. 60,000 per year – this income is shared by Virender and his brother. On small patches of the lands that Shanti and Pawan rent, they plant vegetables and fruits for their family’s consumption and gives some of it to the extended family too.

Cultivating paddy does not yield good returns. “We spend around Rs. 25,000 per acre to grow paddy,” said Shanti. Their expenditure on wheat is less. “Wheat doesn’t require as much water, manure and pesticides as rice. An acre of land gets ready in Rs. 10,000. And if rains don’t damage the crop, we can sell the produce at a good price,” she said, adding that farmers in Haryana could sell a quintal of wheat at the minimum support price (MSP) of Rs. 1,840 in 2020. 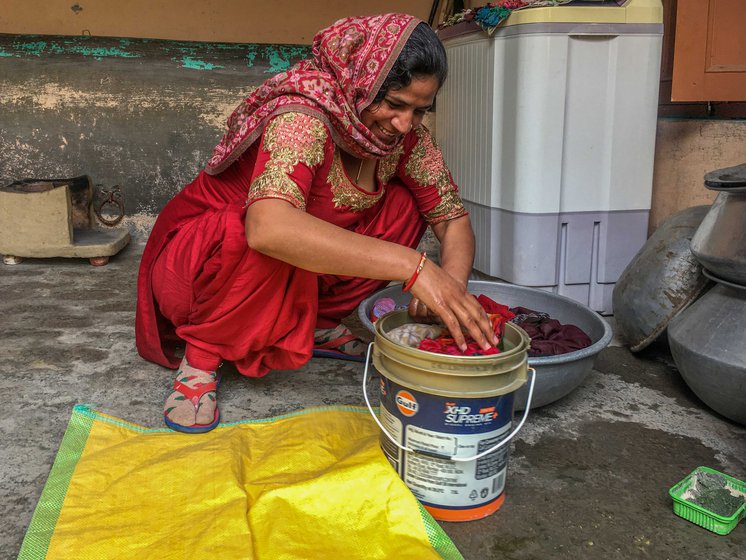 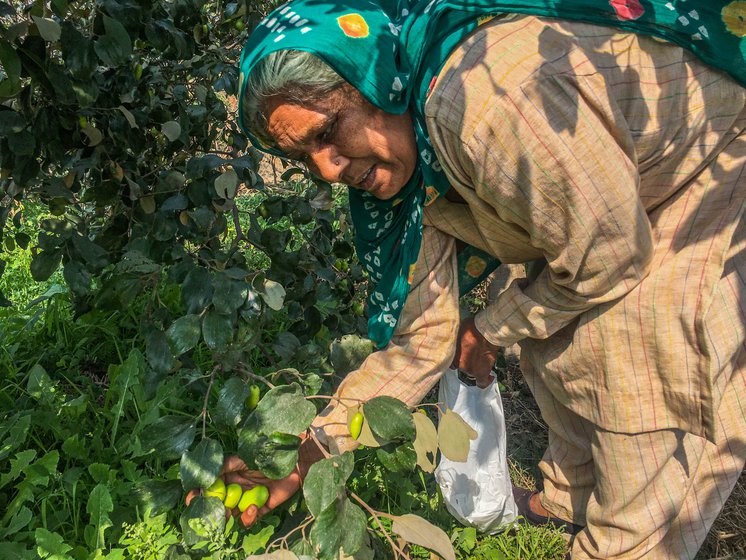 Sunita (left) hasn't been to Tikri yet. She gets news about the protests on her phone. Her mother-in-law, Shanti (right), went to Tikri in mid-January

Shanti, Vidya and Sonia went to Tikri for the first time on January 18, travelling in a hired bus, to attend the Women Farmers’ Day at the protest site.

“We went to support the farmers because the prices of crops will reduce. We won’t be able to sell our crops at a fixed price. We are being turned into slaves. That’s why farmers are fighting for their rights,” explained Vidya. “We may not do farming now, but we are all members of one family.”

Sonia wanted to highlight the problems of small farmers. “Those who own large-sized land can stock their harvest for a year or two, or sell when the prices are better. But a small landowner starts worrying about the expenses of the next season even before the harvest is sold,” said Sonia. “For how long will they [the government] keep us hanging and not solve the issue of these farm laws?”

The laws that they and other farmers are protesting against were first passed as ordinances on June 5, 2020, then introduced as farm bills in Parliament on September 14, and hastened into Acts by the 20th of that month. The three laws are the Farmers (Empowerment and Protection) Agreement on Price Assurance and Farm Services Act, 2020 , the Farmers’ Produce Trade and Commerce (Promotion and Facilitation) Act, 2020 and the Essential Commodities (Amendment) Act, 2020 . 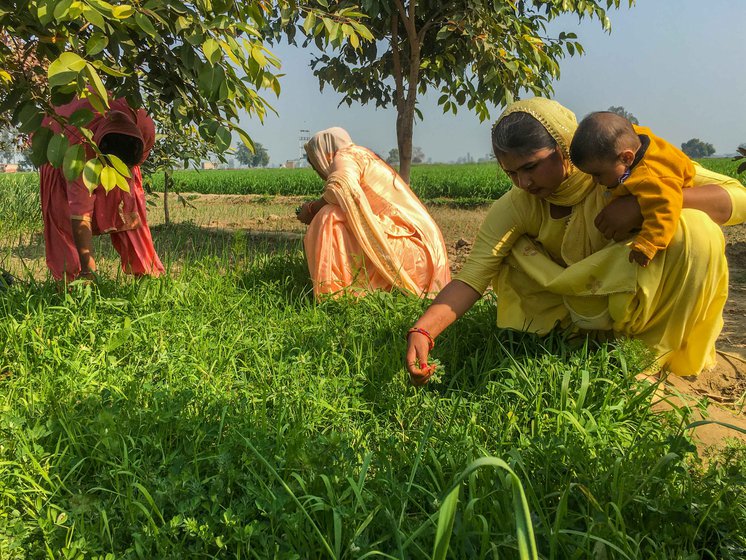 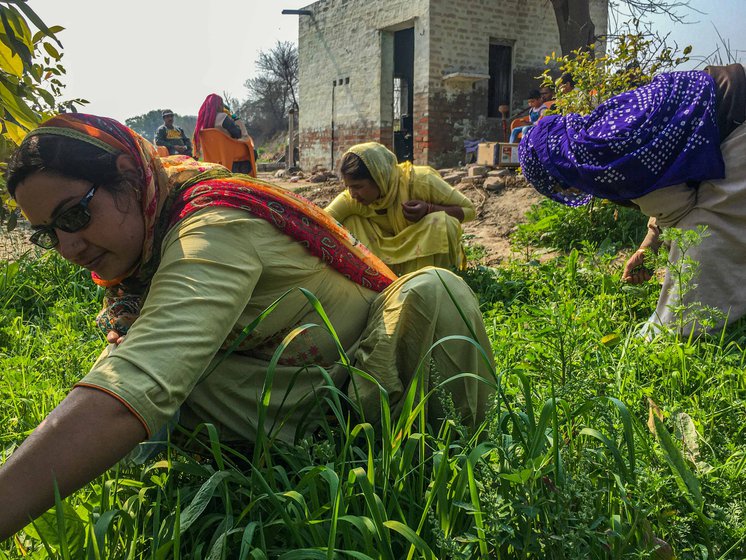 Vegetables and fruits, planted by Shanti in small patches of the family lands, are plucked by the women for consumption at home

The farmers see these laws as devastating for their livelihoods because they expand the space for large corporates to have even greater power over farmers and farming. These laws also undermine the main forms of support to the cultivator, including the minimum support price (MSP), the agricultural produce marketing committees (APMCs), state procurement and more. The three laws have been criticised as affecting every Indian as they disable the right to legal recourse of all citizens, undermining Article 32 of the Constitution of India.

Sunita, Pawan’s 32-year-old wife, is a homemaker who hasn’t gone to Tikri yet because her two sons are young. She wants to visit the protest site at least once. “I know everything that’s happening there. I follow the news and watch it on social media,” she told me. On January 26, she watched reports of the clashes in Delhi during the farmers’ Republic Day tractor march, on her phone.

Soon after Republic Day, a public meeting was called in Petwar to discuss and decide how the village would continue supporting the protesting farmers. “Now they have put down nails [at the protest sites]. Is this the way to treat people who are protesting?” Vidya asked me, angry at the turn of events.

“Many women from our village want to stay at the protest site. But we have responsibilities here. Our children are growing up. We have to prepare their meals and send them to school,” said Sonia. Her three daughters are in their teens and her son is seven. “If necessary, we will take our children with us,” added Sunita.

Sonia believes that their role in the farmers’ protests is important. “This struggle is not one person’s alone. Each one of us is pushing it forward and making it stronger.”

Other stories by Sanskriti Talwar