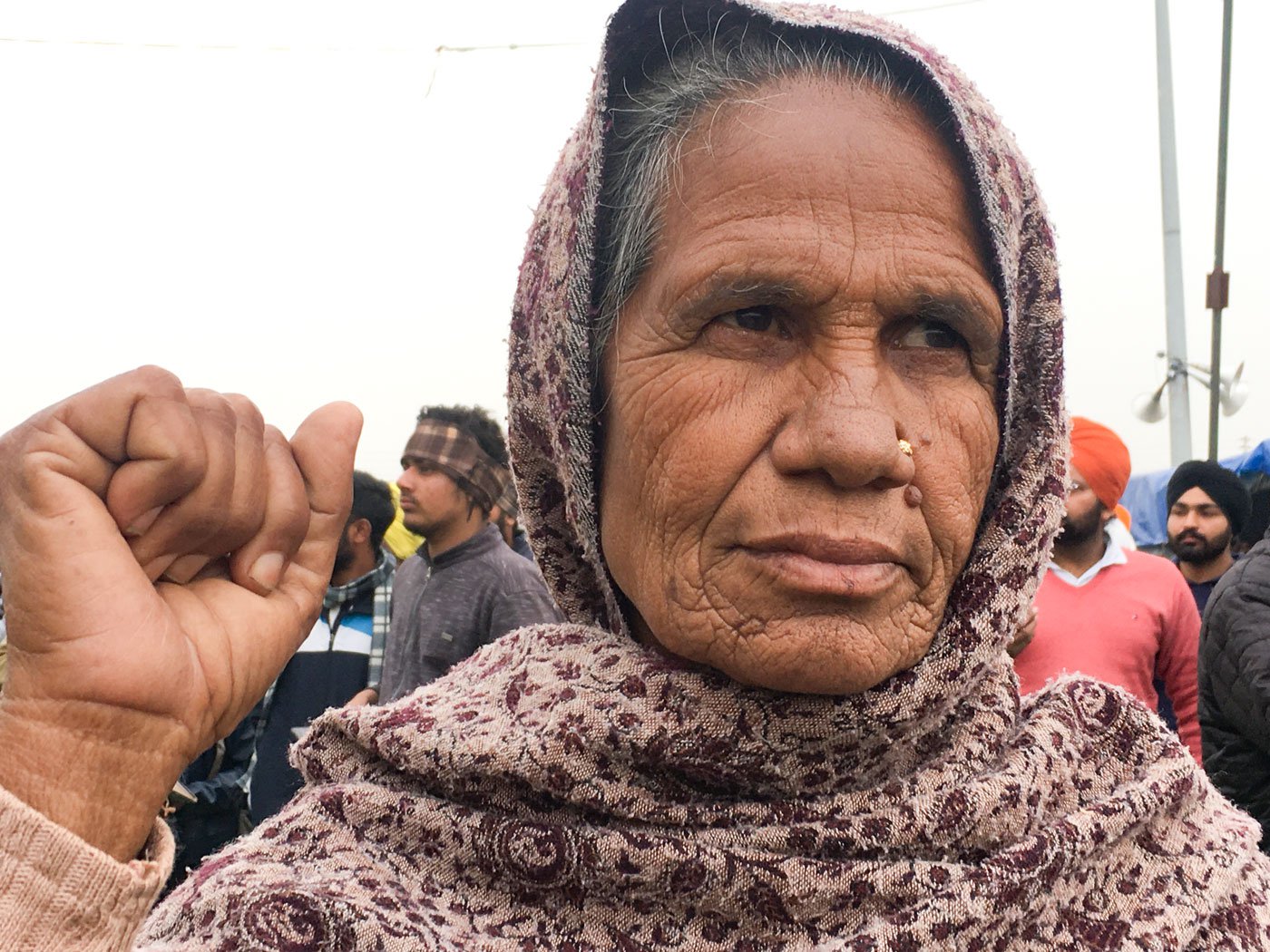 Punjab farm labourers: ‘We are seen as insects’

At the Tikri protest site in west Delhi, 70-year-old Taravanti Kaur is one of the many Dalit farm labourers from Punjab who believe that the centre's new laws will push them further into poverty

Taravanti Kaur is worried. “Whatever little work is available to us now, will also not be there once these farm laws are passed,” she says.

So she has come to the Tikri protest site in west Delhi, from Killianwali village in Punjab. Taravanti and roughly 300 other women are among the 1,500 farm labourers who arrived here on the night of January 7 from various districts of the state – Bathinda, Faridkot, Jalandhar, Moga, Muktsar, Patiala and Sangrur. All of them are members of the Punjab Khet Mazdoor Union, which works on issues related to livelihoods, land rights for Dalits and caste discrimination.

And she is one of the millions of women across India who depend on farmland work for a livelihood – of the 144.3 million agricultural labourers in the country, at least 42 per cent are women.

Taravanti, who is 70 years old, earns Rs. 250-300 a day by labouring on wheat, paddy and cotton fields in her village in in Malout tehsil in Muktsar district. “But there isn’t much work available, as there was before. Labourers have been suffering since the hari kranti [Green Revolution],” she says, referring to the 1960s and after, when, among other agrarian changes, mechanisation of farming became widespread in Punjab. 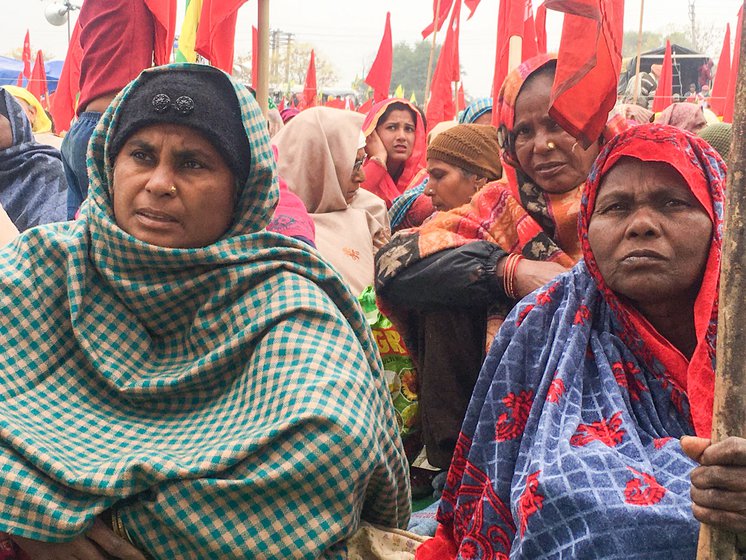 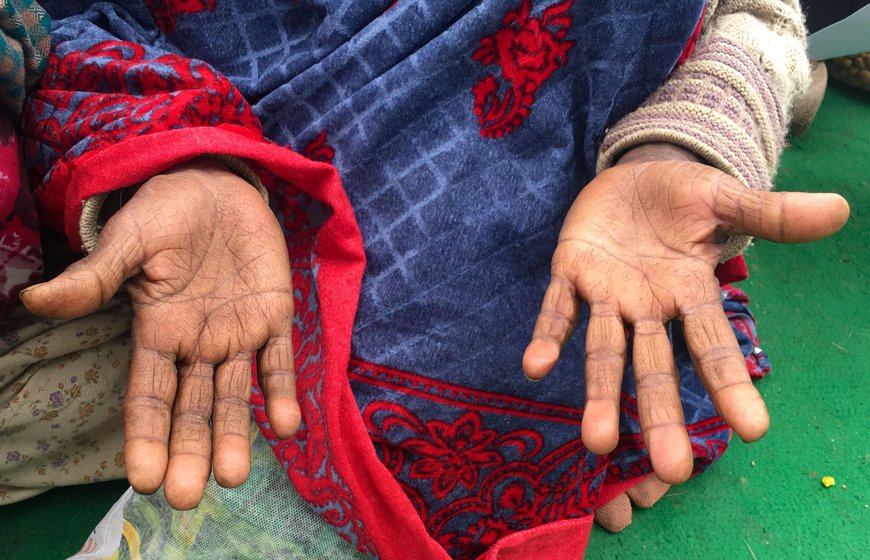 Hardeep Kaur (left), 42, is a Dalit labourer from Bhuttiwala village of Gidderbaha tehsil in Punjab’s Muktsar district. She reached the Tikri border on January 7 with other union members. “I started labouring in the fields when I was a child. Then the machines came and now I barely get work on farms," she says "I have a job card [for MGNREGA], but get that work only for 10-15 days, and our payments are delayed for months." Shanti Devi (sitting, right) a 50-year-old Dalit agricultural labourer from Lakhewali village of Muktsar district , says, “We can eat only when we have work. Where will go once these farm laws are implemented? Right: Shanti Devi’s hands

“I may have grown old, but I am not weak. I can still do hard labour if provided with work,” she says. “But the machines have taken over. We farm labourers don’t find [much] work anymore. Our children stay without food. Only once in a day we have a proper meal. The government has made our life a living hell, after already crossing all the limits by taking most of our work from us.”

With fewer days of work available now on the farms, she says, labourers have turned to MGNREGA sites. The Mahatma Gandhi National Rural Employment Guarantee Act guarantees each family in rural India 100 days of work a year – for Rs. 258 in Punjab. “But for how long?” she asks. “We have been demanding fixed jobs. We demand daily work.”

Taravanti belongs to a Dalit community. “It has always been different for us. And we are poor,” she says. “They [the upper castes] don’t consider us as equals. We are not treated as humans by others. We are seen as insects and pests.”

But during the ongoing protests, participation across class, caste and gender divides is growing strong every day, she says. “This time we have all come together in this protest. We are now on the right path. We will continue with our protest until these farm laws are repealed. This is the time for all to unite and demand justice.” 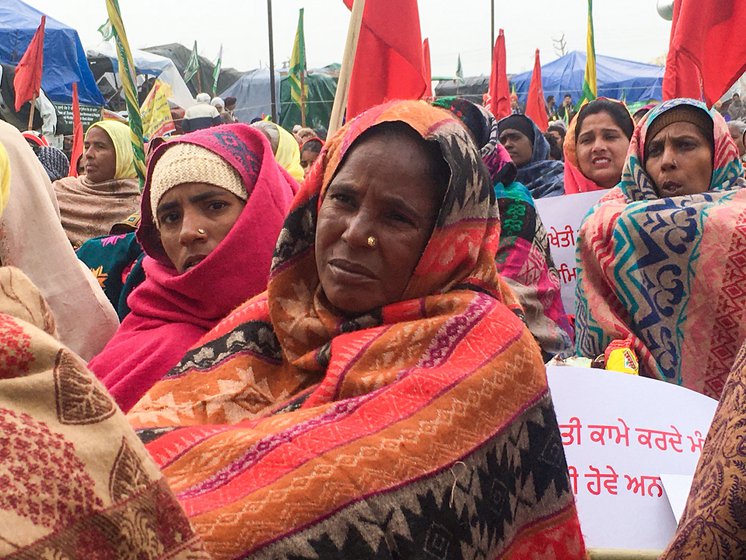 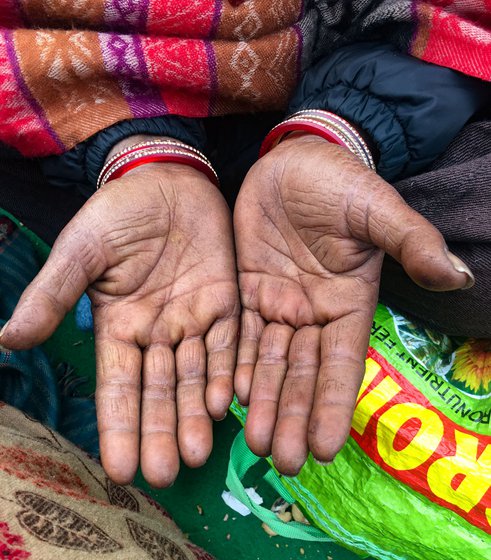 Pamanjeet Kaur, 40, a Dalit labourer from Singhewala village in Malout tehsil of Muktsar district, Punjab, was among the 300 women members of Punjab Khet Mazdoor Union who reached on the outskirts of the national capital on January 7. They all returned to Punjab on January 10. Right: Paramjeet's hands

The farm laws were first passed as ordinances on June 5, 2020, then introduced as farm bills in Parliament on September 14 and hastened into Acts by the 20th of that month. The three laws are the Farmers (Empowerment and Protection) Agreement on Price Assurance and Farm Services Act, 2020 , the Farmers’ Produce Trade and Commerce (Promotion and Facilitation) Act , 2020 and the Essential Commodities (Amendment) Act, 2020 . The laws have also been criticised as affecting every Indian as they disable the right to legal recourse of all citizens, undermining Article 32 of the Constitution of India.

The farmers all see these three laws as devastating for their livelihoods by expanding the space for large corporates to have even greater power over farmers and farming. These laws also undermine the main forms of support to the cultivator, including the minimum support price (MSP), the agricultural produce marketing committees (APMCs), state procurement and more.

“The government says they will make changes [amendments] in these laws,” Taravanti says. “But if the laws were right in the first place, as they have been telling us, then why do they now need to talk about changes? This only means the laws they passed were never good.”