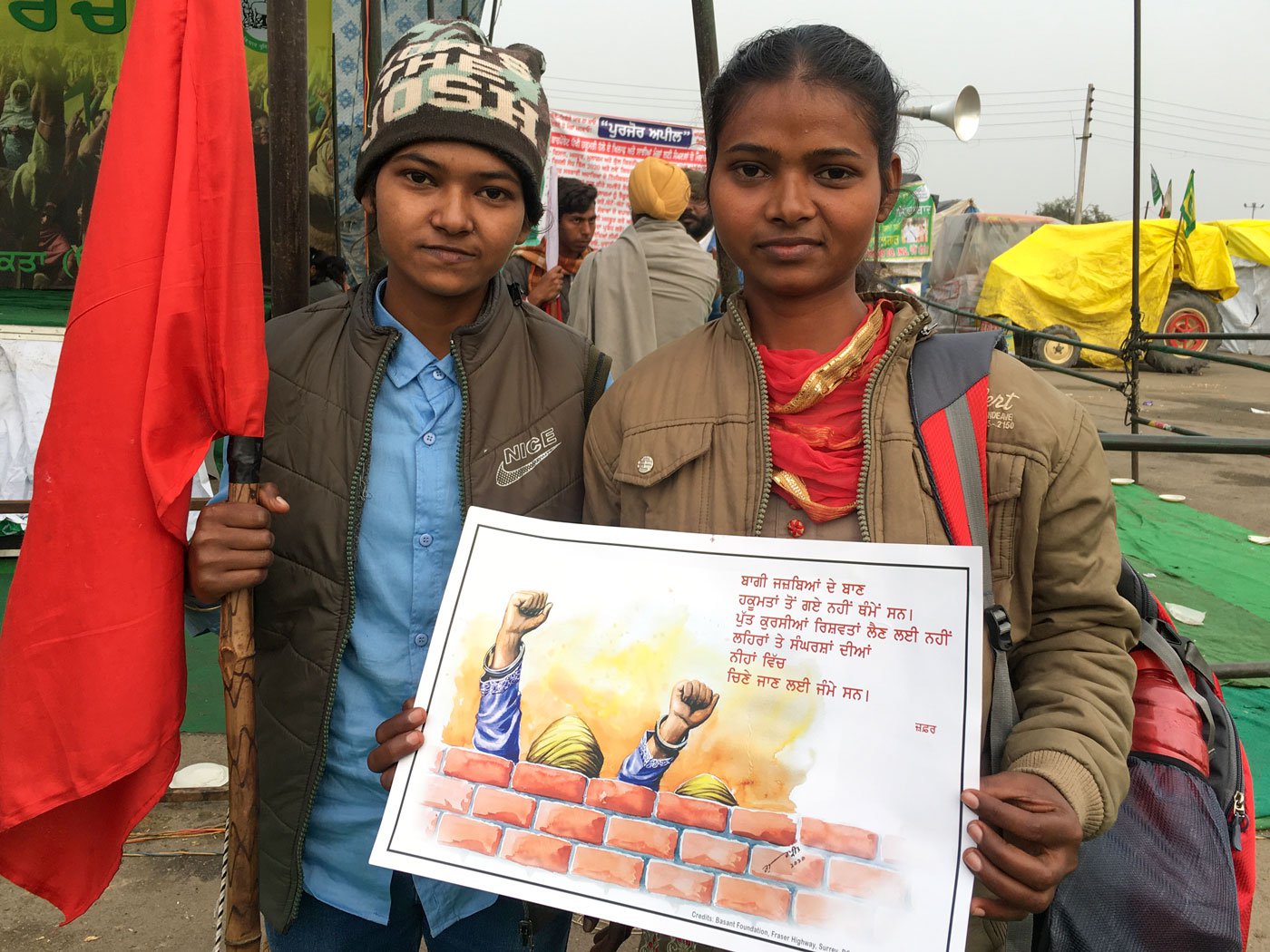 'This struggle is of farm labourers as well'

Resham and Beant Kaur, who are among the protestors at Delhi's borders, emphasise that the farm laws will impact the livelihoods and food security of innumerable households of farm labourers, like their own family

“This struggle is not of farmers alone, but of farm labourers as well,” say Resham and Beant Kaur. “If these farm laws are implemented, not only will it affect farmers, but also the labourers whose livelihood depends on them.”

So on the afternoon of January 7, the two sisters travelled from Muktsar district of Punjab to join the farmers’ protest on the outskirts of the national capital.

There were at least 20 buses, carrying around 1,500 people, arranged by the Punjab Khet Mazdoor Union, that arrived that night at Tikri in West Delhi – one of the sites of the protests against the new farm laws. They came from from Bathinda, Faridkot, Jalandhar, Moga, Muktsar, Patiala and Sangrur districts. Resham and Beant got on to one of these buses from a point near Channu, their village in Muktsar district.

Many farmers have been camping at Tikri and other protest sites in and around Delhi since November 26, while others join in for a few days, then return to their villages and inform people there about the ongoing agitation. “Many in our village are not aware how these new farm laws will affect farm labourers,” 24-year-old Resham says. “In fact, news channels telecast in our villages say that these laws are for the benefit of farmers and farm labourers. They say that labourers will be given land and provided with better facilities following the rollout of these laws.”

The laws were first passed as ordinances on June 5, 2020, then introduced as farm bills in Parliament on September 14 and hastened into Acts by the 20th of that month. The three laws are the Farmers (Empowerment and Protection) Agreement on Price Assurance and Farm Services Act, 2020 , the Farmers’ Produce Trade and Commerce (Promotion and Facilitation) Act , 2020 and the Essential Commodities (Amendment) Act, 2020 . The laws have also been criticised as affecting every Indian as they disable the right to legal recourse of all citizens, undermining Article 32 of the Constitution of India. 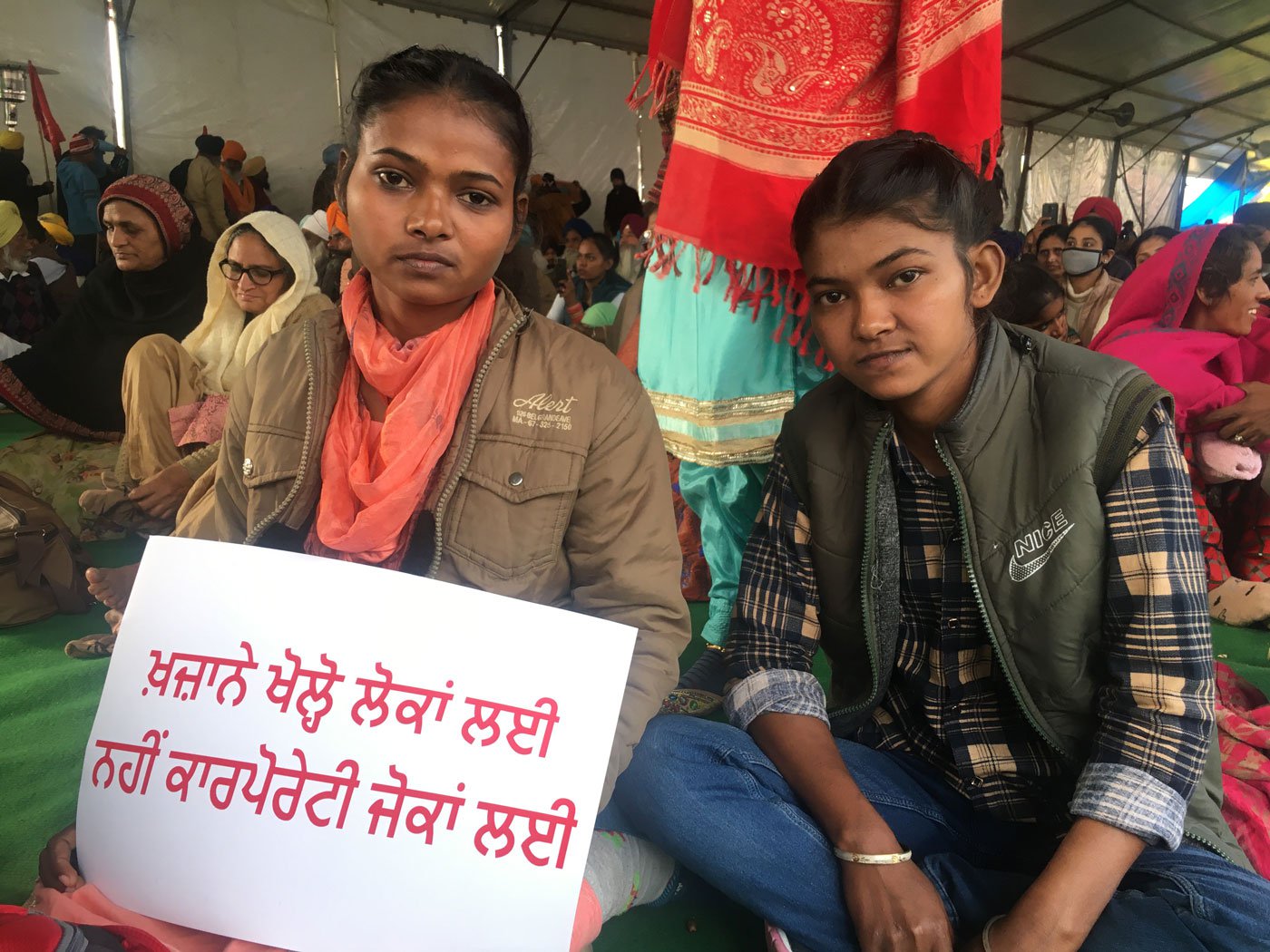 Resham (left) and Beant: 'If farmers' land is taken away by these laws, will our parents find work and educate their children?'

The farmers all see these three laws as devastating for their livelihoods by expanding the space for large corporates to have even greater power over farmers and farming. These laws also undermine the main forms of support to the cultivator, including the minimum support price (MSP), the agricultural produce marketing committees (APMCs), state procurement and more.

Resham and Beant belong to the Bauria community, a Dalit group – about 58 per cent of the population of 6,529 in Channu village is from Scheduled Castes. The family has worked its way up through farm labour; their mother Paramjeet Kaur, 45, continues to work on farms, while their father, Balveer Singh, 50, now runs a workshop in the village where he makes trolleys and metal gates. Their brother, 20-year-old Hardeep, who is has studied till Class 10 and is married, also works with their father.

Resham has an MA degree in History and was teaching at a private school before the lockdown, earning a salary of Rs. 3,000 a month. Since then, she has been teaching tuition classes and makes Rs. 2,000 a month. Beant, 22, who has a BA degree, plans to apply for jobs as an inventory clerk. The sisters also do tailoring at home, stitching salwar-kameez sets for Rs. 300. At times, they paid their college fees from the income from tailoring.

“We were born in a family of farm labourers,” says Resham. “Every child who is raised by a farm labourer knows how to do labour. I too worked in the fields, next to my parents, for 250-300 rupees a day, during my school holidays.”

Referring to the children of all farm labourers, she adds, “We never sit free during our school breaks. Unlike other kids, we don’t go out or travel for entertainment when off from school. We labour in the fields.”

These new laws, she adds, will only make it more difficult for farm labourers to educate their children. “Anyway it is assumed that the child of a labourer is also supposed to be a labourer. If the land of farmers is taken away by these laws, will our parents find work and educate their children? The government is trying to reduce the poor to nothing – leaving them with no work, no food and no education.” 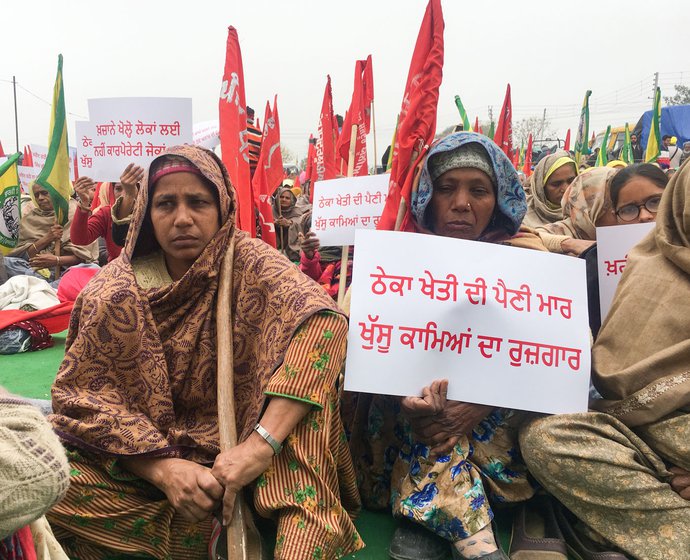 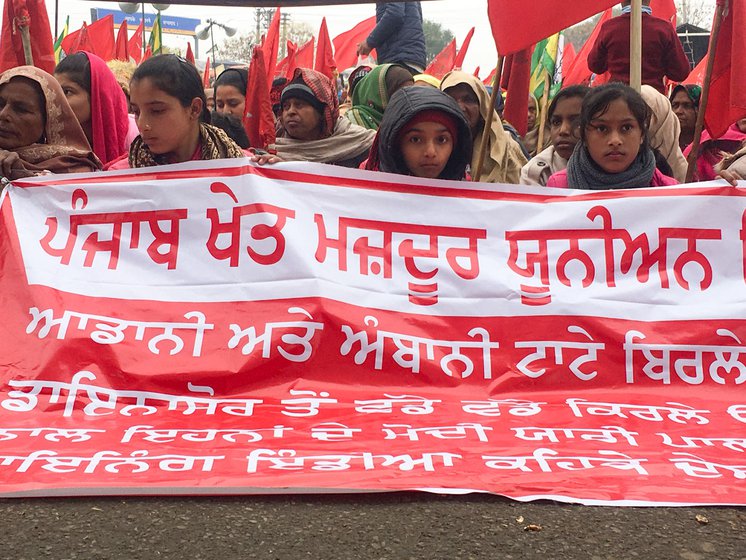 Many farmers have been camping at Tikri and other protest sites in and around Delhi since November 26, while others join in for a few days, then return to their villages and inform people there about the ongoing agitation

At noon on January 9, the sisters left from Tikri with other union members for the Singhu protest site on the Haryana-Delhi border. Their buses stopped some three kilometres away, and they all walked to the sitting arena in front of the main stage, with placards and their union flags. The placard Resham was holding said: ‘Open the treasuries for the people, not for the blood sucking corporates’.

Beant has participated in more union meetings than her elder sister. She has been associated with the Punjab Khet Mazdoor Union for seven years, while Resham joined three years ago. Beant says this is because of her aunt and uncle in Khunde Halal village (some 50 kilometres from Channu), who adopted her when she was a child because they wanted a daughter, were members of the union. “So I became one at early age as well,” she says. (Three years ago, Beant returned to her parents’ house in Channu for doing her graduation).

The 5,000-member Punjab Khet Mazdoor Union works on issues related to livelihoods, land rights for Dalits and caste discrimination. “Many see that this agitation against the farm laws by the famers is for their land and issues related to minimum support price. But for the farm labourers, it is about their food security – about the public distribution system,” says Lachhman Singh Sewewala, general secretary of union.

“There is no union of farm labourers in our village, only farmers’ unions. That is why some of the farm labourers there are not aware that they too are being wronged [by these laws],” adds Beant. “But we are aware. We have come to Delhi so that we can give them a real picture of the protest and why these laws will affect all, not just farmers” Resham says.

The sisters started their return journey home on January 10. After these two days at the protest sites, Beant says she has plenty to convey to her villagers. “If outsiders will take over farming on the lands of farmers, where will the labourers go? If the Mandi Board is dismantled and government-run agencies are made to failed, where will the poor get their ration from?” she asks, referring to the Punjab State Agricultural Marketing Board . “The poor will be left to die. This government thinks we are fools. But we are not. We know how to fight for justice and we are learning every day.”