One nation, no ration card

Rukhsana Khatoon, a domestic worker in Delhi, has tried for years to get a ration card in her husband's village in Bihar – and is now desperate for it with her family in a downward spiral due to the lockdown

This was her third attempt, in August 2018, and she was ready to wait.

Rukhsana, 30, and her husband Mohammed Wakil, 34, were working hard and managing well. From Rukhsana’s jobs as a domestic worker in five houses in West Delhi’s Patel Nagar, and Wakil’s work as a tailor, they brought home a combined income of Rs. 27,000 a month. Even after handling all the expenses for their family of six (three daughters aged 12, 8, 2, and a 10-year-old son) and sending Rs. 2,000 to Wakil’s mother, a homemaker, in the village, the couple managed to save a bit every month.

The hard work was paying off. Wakil had opened his own small tailoring shop in the New Ranjeet Nagar area of West Delhi, hoping to earn more than the Rs. 12,000 he brought in as a tailoring shop employee. That was on March 15, 2020.

Barely a week later, the nationwide lockdown was imposed across India

Rukhsana’s employers told her to stop coming to work and it soon became clear she was not going to be paid for the lockdown months. She continued to cook in one home and earned Rs. 2,400 – instead of Rs. 15,000 from working in five houses. By June she lost that job too, but soon found another one cleaning and cooking, where the new employer, concerned about the news of ‘super spreaders’, wanted to know if she visited a mosque. “I didn’t feel bad. Everyone is scared of corona, so I understand her concern,” Rukhsana said. 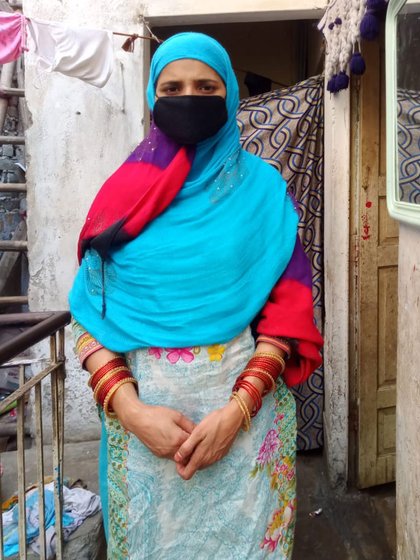 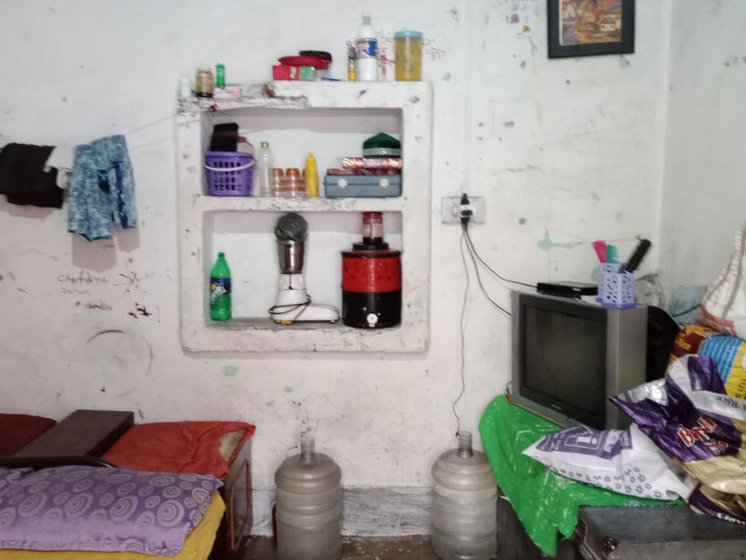 When Rukhsana and her family couldn't pay rent for their room in West Delhi, the landlord asked them to leave

By June, the family’s savings were running out. They claimed the one-time monetary assistance of Rs. 1,000 provided by the Bihar government to its migrant workers under the Chief Minister Special Assistance Scheme, after a relative from the village alerted them about it.

“I was able to withdraw the relief sent by Nitish Kumar, but couldn’t withdraw the amount Modi gave,” Rukhsana said, referring to the Rs. 500 promised for three months from April under the Pradhan Mantri Garib Kalyan scheme. The bank told her there was an error in the link tied to her account. “ Kya hota hai 1,000 rupees se? It didn’t even last for two days,” she added.

Some relief came with the food distribution that began by the end of March at the government-run Sarvodaya Kanya Vidyalaya near her house – one meal at 11 a.m. and the other at 5 p.m. “Both times, they gave us boiled rice with dal or rajma . No spices, no salt – a meal prepared for the sick. I had to stand in a line of some 200 people. If I reached early, I would get the meal.” Otherwise, Rukhsana turned to her mother, also a domestic worker, who lives nearby, for some food rice and dal for the day. (Her father, a daily wage labourer, died many years ago due to tuberculosis.)

The lockdown meals distributed at the school were never enough for the entire family. “My husband and I used to have a small portion so that the children don’t go hungry. What option did we have? We don’t have a ration card here. We had applied for one in our village, but that never came,” Rukhsana told me. 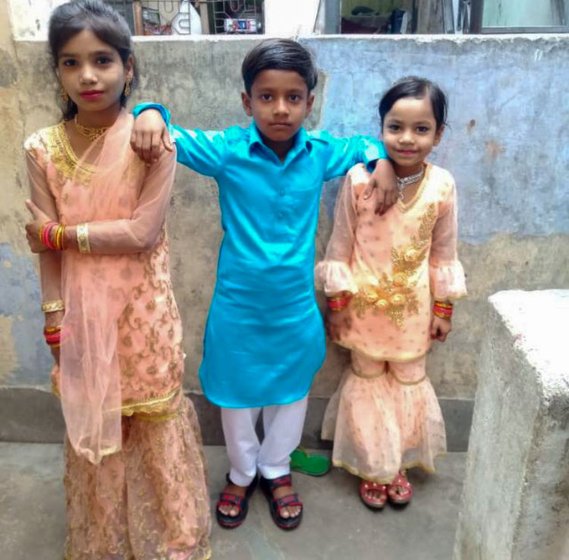 Rukhsana returned to Bihar in June with her four children, aged 12, 10, 8 and 2 (not in the picture)

By the end of May, the food distribution was halted, with many migrants workers returning home, said the government. After that, a former employer gave Rukhsana some rations, including wheat, rice and dal . “We chose to stay in Delhi because there is no work in the village. Now it is getting difficult to live here,” Rukhsana had said to me on the phone on June 11.

So that month, the family began planning for Wakil to stay on in Delhi, while she and the children would return to their village in Darbhanga, around 1,170 kilometres away.

By then, three months of room rent (Rs. 15,000), plus the rent for Wakil’s new shop (Rs. 16,500) were looming. Upon the family’s request, the landlords waived off the rent for two months. Before leaving for Bihar, Rukhsana managed to pay a month’s rent for the room and shop by borrowing money from her previous employers.

In Bihar, she hoped, at least some food would be assured on the ration card they were entitled to – but still don’t have. Under the National Food Security Act, 2013, all families below the poverty line are entitled to buy subsidised food grain – rice at Rs. 3 a kilo, wheat at Rs. 2 and coarse grains (millets) at Re. 1 a kilo – from designated ‘fair price shops’ (ration outlets) of the public distribution system. ‘Priority’ category households ae entitled to a total of 25 kilos of foodgrains a month, while more vulnerable households covered under the Antyodaya Anna Yojana can access up to 35 kilos of foodgrains every month.

In May 2020, a nationwide rollout of the ‘One Nation, One Ration Card’ was announced by the Centre (to be completed by March 2021).  This allows for ‘portability’ of the ration card (wherever it may be registered) after it is ‘seeded’ with the person’s Aadhaar number. This will, if it’s actually implemented, enable anyone in Rukhsana’s situation to access PDS rations from any outlet in the country.

The family’s neighbours in Patel Nagar heard of this new ‘portability’ on the news and told Rukhsana and Wakil. The family’s ration card, still pending in Bihar, became even more critical to get hold of.

“We have to be prepared for the coming months. Who knows if we will find work in Delhi now? We could sustain ourselves in the capital with a ration card in these times with this new system,” Rukhsana had said. “Otherwise, we will return to Bihar. Even if no work is available in our village, we will at least be able to fill our stomachs with a ration card.” 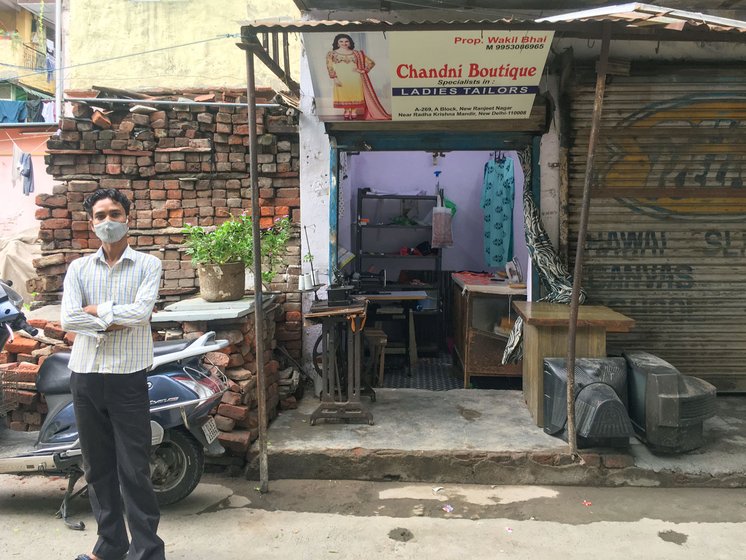 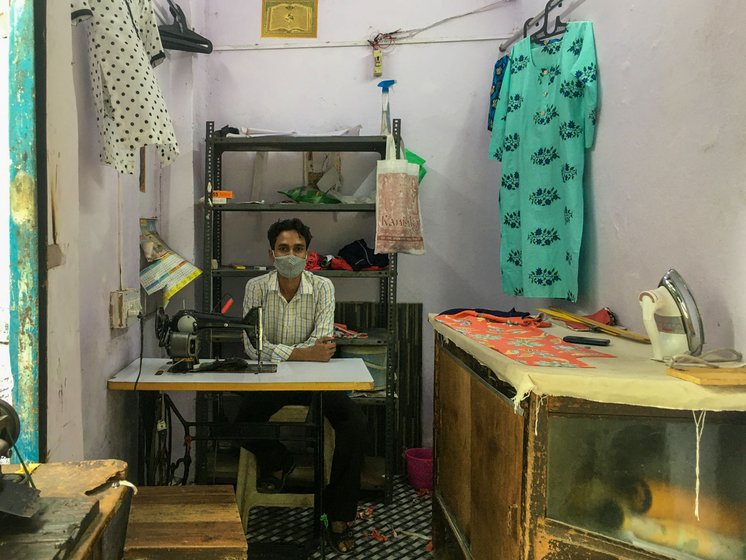 In March, Rukhsana's husband Mohammed Wakil had opened a tailoring shop in Delhi. Now, he is struggling to re-start work

On June 17, she and the children boarded the Bihar Sampark Kranti, a Covid-19 special train, from New Delhi Railway Station. Wakil stayed back, hoping to soon resume work.

Back in Bihar, extended lockdowns till early September and the floods in Darbhanga in July and August, made things worse. Though Mohan Bahera village wasn’t flooded, travelling to enquire about the ration card became even more difficult. Still, twice between July and August 2020, Rukhsana made it to the Benipur Nagar Parishad, 10 kilometres away, and found the ration office shut.

In September, she again went to Benipur to ask about her ration card. The officials there told her it hasn't come, and that she would have to apply once again.

“In August 2018, when I had gone with my mother-in-law to Benipur to apply for the ration card [a third time], the officials gave me a slip [of paper] and said that it will arrive at our home in the village. But my mother-in-law never received it,” she said. That was the month their pucca hose was completed in Mohan Bahera, built partly with a loan of Rs. 35,000 from the local self-help group.

It’s been five years since Rukhsana first applied for a ration card. After each attempt, slips have been handed over, the card does not arrive. With her third attempt in August 2018 (the last time Rukhsana went to Bihar until June 2020) as part of the the application in Benipur she had to provide a copy of the Aadhaar cards of each of her family members. But the family had got their Aadhaar cards made in Delhi, so she had to get the address changed on these cards to their house in the village to apply for the ration card.

'My husband would rather stay hungry than ask anyone for help,' says Rukhsana, who awaits her ration card in Mohan Bahera village

On October 6, she told me on the phone, “For all such work to be done, it requires money [a bribe] here. Then you can get anything done.” She thinks her ration card has not been given after all these attempts perhaps because her name is still mentioned on her mother’s card in Delhi. “That will have to be deleted. Only then I think something will happen [here].”

That will require more trips to the ration offices, more paperwork.

Back in Delhi, Wakil has started receiving a few tailoring orders since August. “Sometimes one or two customers show up. I earn Rs. 200-250 that day. Otherwise there are no customers at all,” he says. He is managing to send Rs. 500 home every month.

When the family could again not pay rent in Delhi from June to August, the room’s owner asked Wakil to vacate, and in September he moved to an even smaller dwelling; the rent for the shop is still pending. Rukhsana has applied for a loan of Rs. 30,000 with the self-help group in the village to manage rent and to repay Rs. 12,000, the couple owe to her previous employer in Delhi, and pay off vegetable vendors and others from whom she bought on credit. But that application too is pending. On October 16, she took a loan of Rs. 10,000 from a villager when a previous employer in Delhi insisted she pay back the money she borrowed during the lockdown.

Rukhsana has decided to stay in Bihar for a while. She is unsure about finding jobs as a domestic worker again in Delhi, and wants to wait for the ration card in the village.

“I know my husband would rather stay hungry than ask anyone for help,” she had said. “Only the government can do something and give us our ration card.”