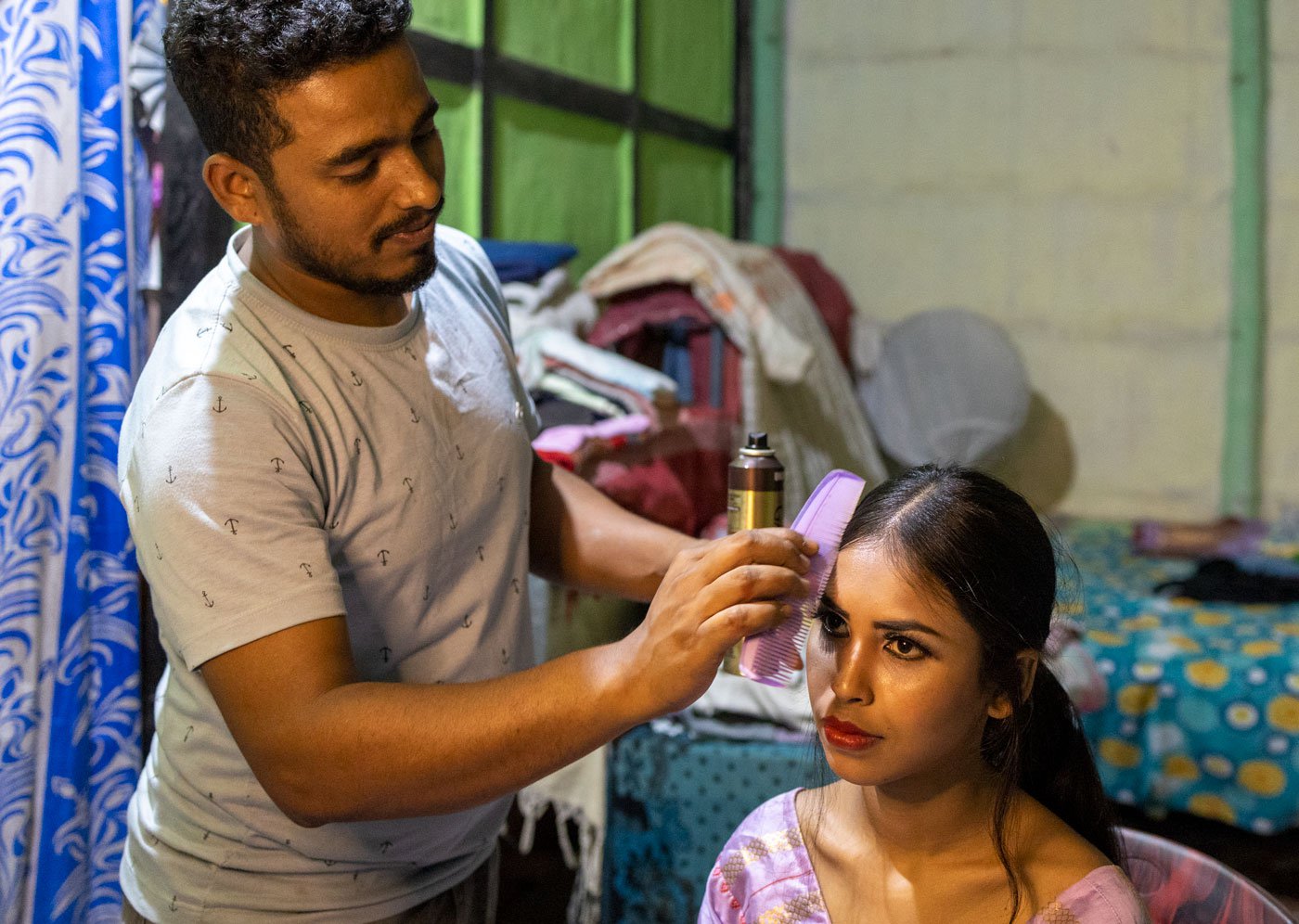 There is no such thing as a free lunch.

Unless of course, you are a lucky cow perusing the food stalls on Kamalabari ghat , a busy ferry station in Majuli, a river island set amidst the mighty Brahmaputra in Assam.

Mukta Hazarika knows this all too well. Mid-conversation with us, he suddenly pauses when he hears a shuffle and darts to the front of his eatery where a bovine intruder is just about to help itself to some food on the counter.

He shoos the cow off the premises, turns around and laughs, “I can’t leave my hotel [food stall] for more than a minute. Cows grazing nearby come in to eat and mess up the place.”

Mukta has a three-in-one role at the 10-seater eatery: cook, server and owner. So, it makes sense that it’s also named after him – Hotel Hazarika.

But Hotel Hazarika, running successfully for six years now, is hardly the only feat 27-year-old Mukta has to his credit. He is a triple threat in the world of entertainment – actor, dancer and singer – as well as a skilful makeup artist who ensures the people of Majuli look and feel their best when the occasion demands it.

This, we had to see. But, in the meantime, there are people to serve. 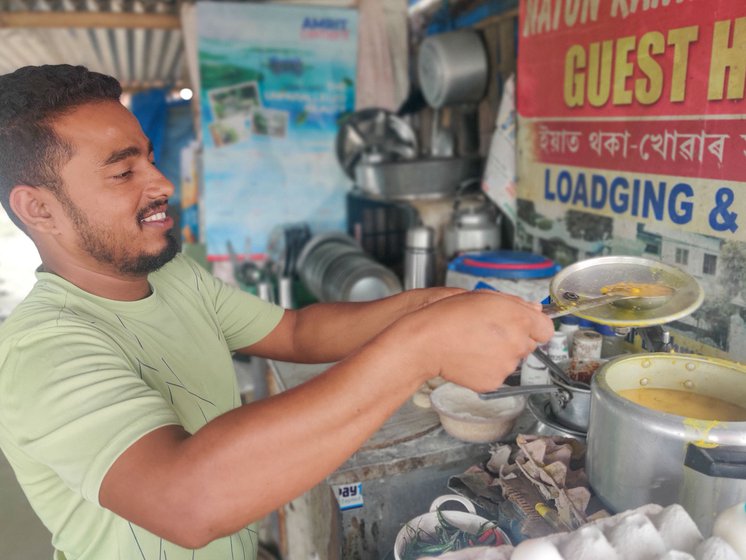 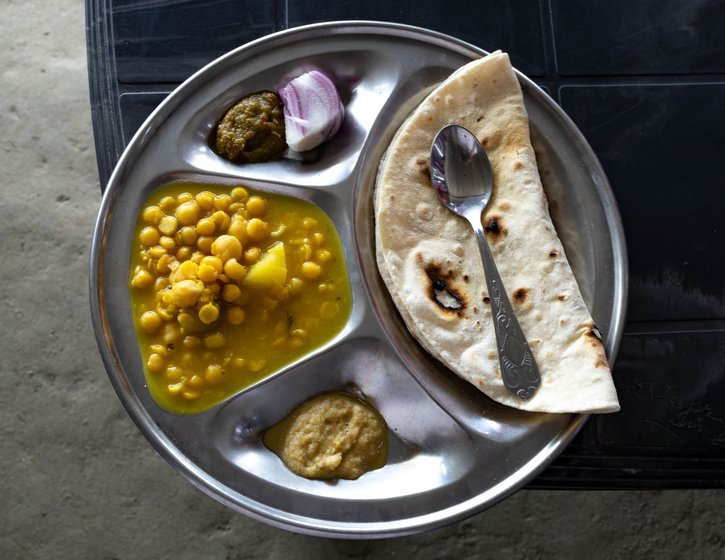 Left: Mukta Hazarika is owner, cook and server at his popular eatery by the Brahmaputra. Right: Lunch at Hotel Hazarika is a wholesome, delicious spread comprising dal, roti , chutneys, an egg, and a few slices of onion 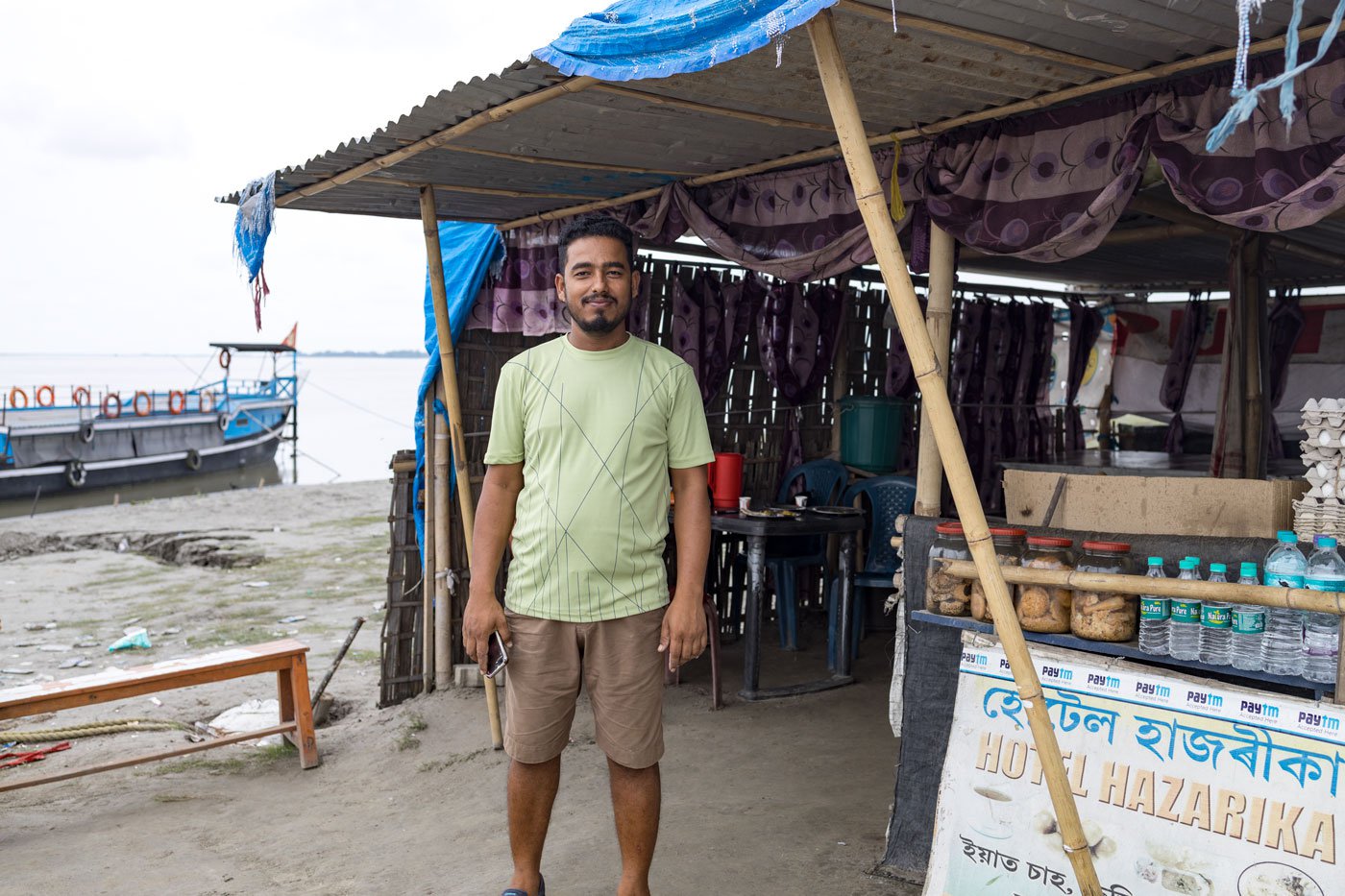 Mukta, a Sociology graduate, set up his riverside eatery six years ago after the much-desired government job continued to elude him

The pressure cooker hisses. Mukta opens the lid and stirs the pot, and the aroma of white chana dal curry wafts through the air. He alternates between stirring the dal and swiftly making rotis – we learn that he makes over 150 of these a day for hungry commuters and others at the ghat .

In a matter of minutes, two plates are placed in front of us. We have rotis , a fluffy omelette, dal , a slice of onion and two chutneys: pudina (mint) and coconut. All this delicious food for two people costs 90 rupees.

After a little persuasion, a shy Mukta obliges us. “Come home at six tomorrow evening, and I’ll show you how it’s done.”

When we arrive at Mukta’s home in Khorahola village in Majuli, we realise we are not alone. Cousins, friends and neighbours trickle in to watch the makeup artist transform 19-year-old Rumi Das, a neighbour and good friend. Mukta is one of only two or three male makeup artists in Majuli.

Mukta begins by taking out an assortment of makeup from a duffel bag. “All of this makeup is from Jorhat [about 1.5 hours away by boat],” he says as he arranges tubes of concealers, bottles of foundation, brushes, creams, palettes of eyeshadows, and more on a bed. 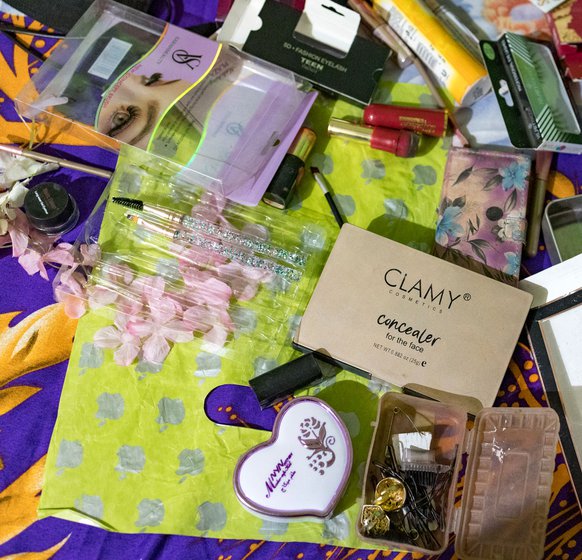 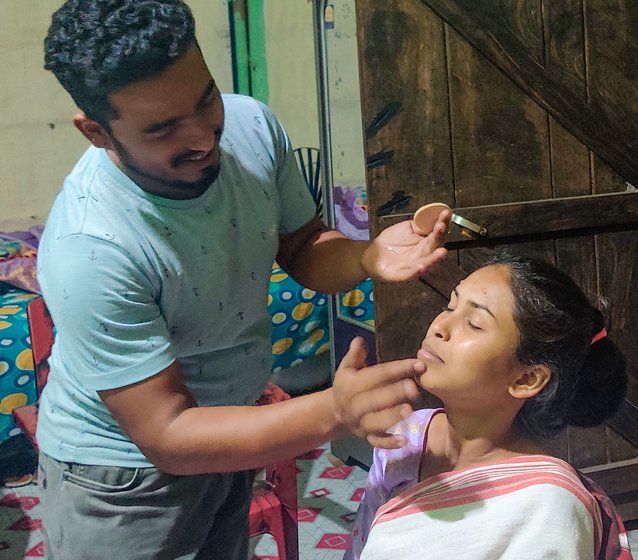 Left: Mukta’s makeup kit has travelled all the way from Jorhat, a 1.5-hour boat ride from Majuli. Right: Rumi's transformation begins with a coat of primer on her face

It’s not just makeup we are getting today; we are getting the whole package. Mukta instructs Rumi to change and, in a few minutes, the young woman turns up in a lilac mekhela chador, a traditional Assamese saree. She sits down, Mukta plugs in a ring light and then starts to work his magic.

As he deftly applies a primer (a cream or gel applied to create a smooth surface on the face for better makeup application) onto Rumi’s face, he says, “I was around 9 years old when I started watching Bhaona (a traditional form of entertainment with religious messages that is prevalent in Assam). And I used to like and appreciate the makeup the actors had on.”

There began his fascination with the world of makeup, one he would experiment with at every festival and play that took place in Majuli.

Pre-pandemic, Mukta even got some professional help to brush up his skills. “I met Puja Dutta, a makeup artist who works in Assamese serials and films in Guwahati, at the Kamlabadi ghat and she started a conversation with me just like you did,” he says, adding, the artist took an interest in his pursuit and offered to help. 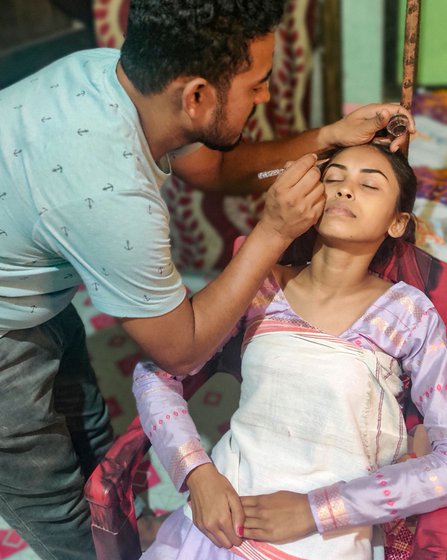 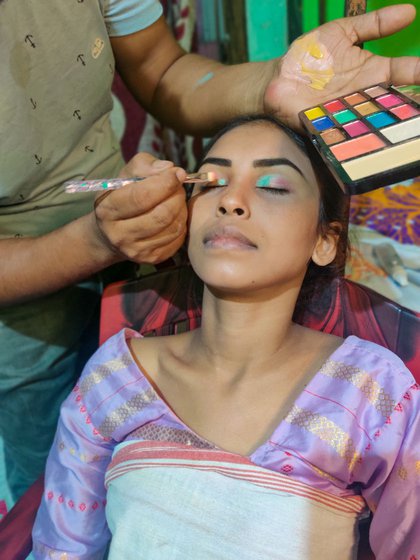 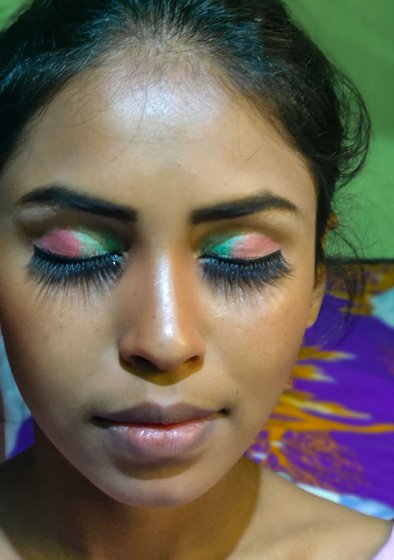 He applies a thin coat of foundation on Rumi’s face and continues to talk. “Puja found out I was interested in makeup and said I could come and learn at the course she was teaching in Goramur College,” he says. “The entire course was for 10 days but I could only attend three days. I didn’t have the time to do more because of my hotel. But from her, I learned more about hair and makeup.”

Mukta now begins to paint Rumi’s eyes – easily the most complicated part of a routine.

As he applies a fluorescent eye-shadow on Rumi, he tells us that he also acts, dances and sings, mostly at festivals like Bhaona. While applying makeup on Rumi, he can do one of those things; he starts to sing. His evocative rendition of the Assamese song Rati Rati is about a person longing for their lover. We think to ourselves, all that’s missing is a YouTube channel with thousands of followers.

In the last decade, YouTube, Instagram and TikTok have seen a proliferation of self-made makeup artists. These platforms have made thousands of such people famous, while helping viewers learn how to contour, conceal, colour-correct, and much more. Many of these videos are productions of sorts, where artists even sing, rap or act out iconic scenes from movies while they apply makeup. 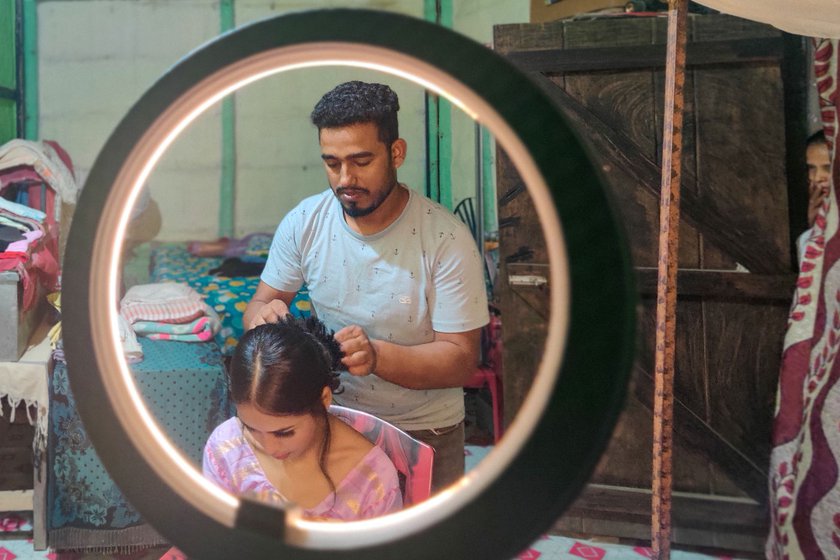 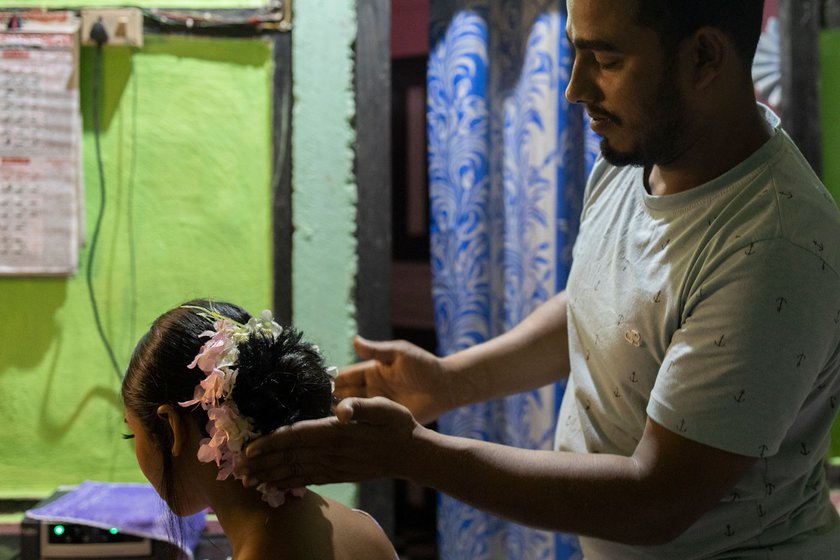 Mukta developed an interest in makeup when he was around nine years old. Today, as one of just 2-3 male makeup artists in Majuli, he has a loyal customer base that includes Rumi 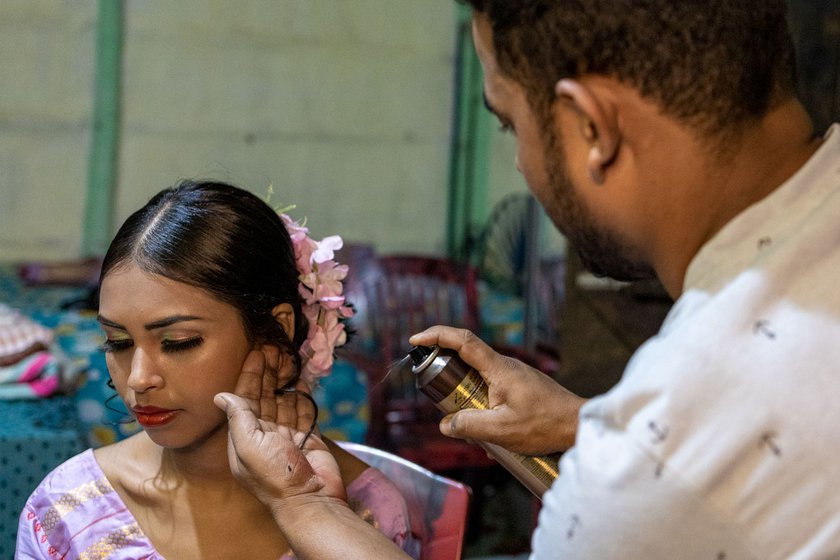 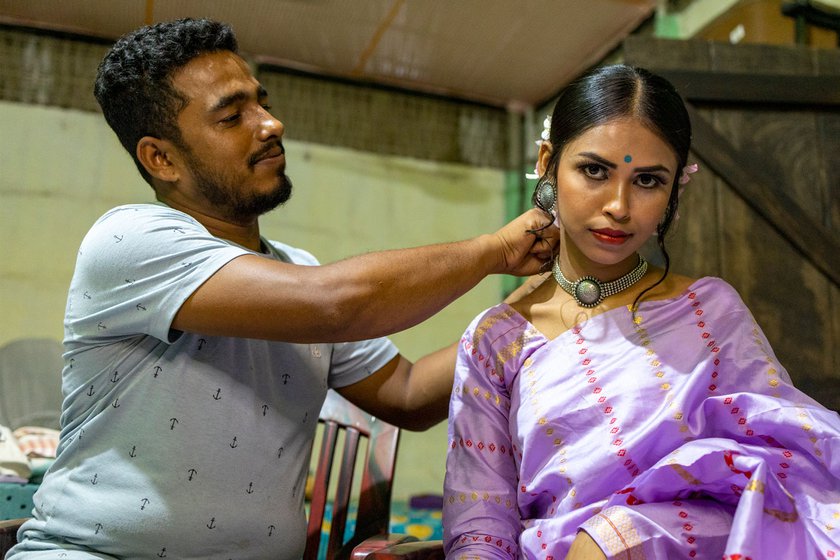 Left: Mukta delicately twists Rumi's hair into a bun, adds a few curls and flowers, and secures it all with hairspray. Right: Rumi's makeover gets some finishing touches

“He is a very good actor. We love watching him act,” chimes in Banamali Das, 19, one of Mukta’s closest friends and one of those present in the room to witness Rumi’s transformation . “ He is a man of natural talent. Doesn’t need to rehearse a lot. He just gets it.”

An older woman, in her mid-50s, smiles at us from behind the curtain. Mukta introduces her as his mother. “My mummy Prema Hazarika and my papa Bhai Hazarika are my biggest support systems. I’ve never been told I cannot do something. I was always encouraged.”

We ask how often he gets to do this work and whether it helps his income. “Bridal makeup is usually Rs. 10,000. I take 10,000 from people with stable jobs. I get such a client once a year,” he says. “For people who cannot pay as much, I tell them to pay what they can.” For patla or light makeup, Mukta charges up to 2,000 rupees. “This is usually done for pujas , shaadis [weddings] and parties.”

As we leave, we see Mukta’s father, Bhai Hazarika, 56, seated in the hall, next to their pet cat. We ask him what he thinks of Rumi’s look and Mukta’s skills, “I am very proud of my son and all he does.” 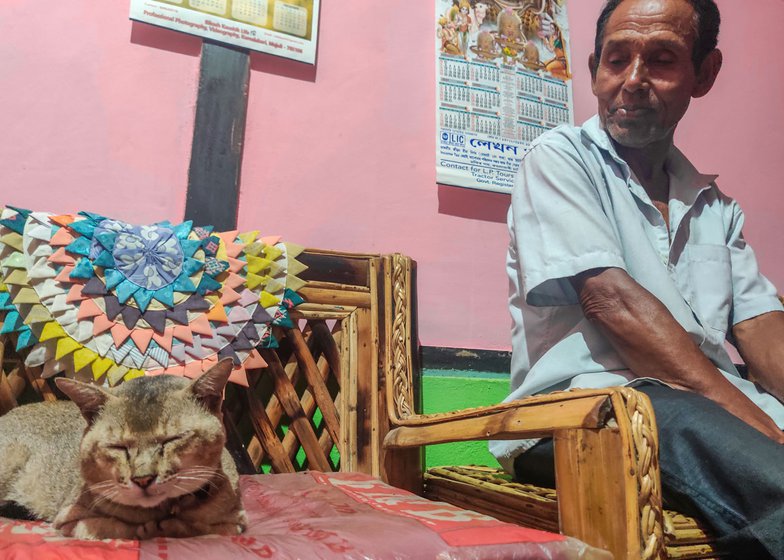 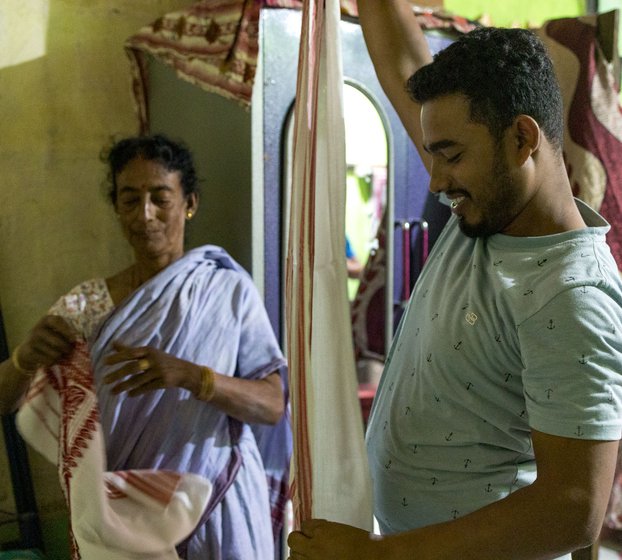 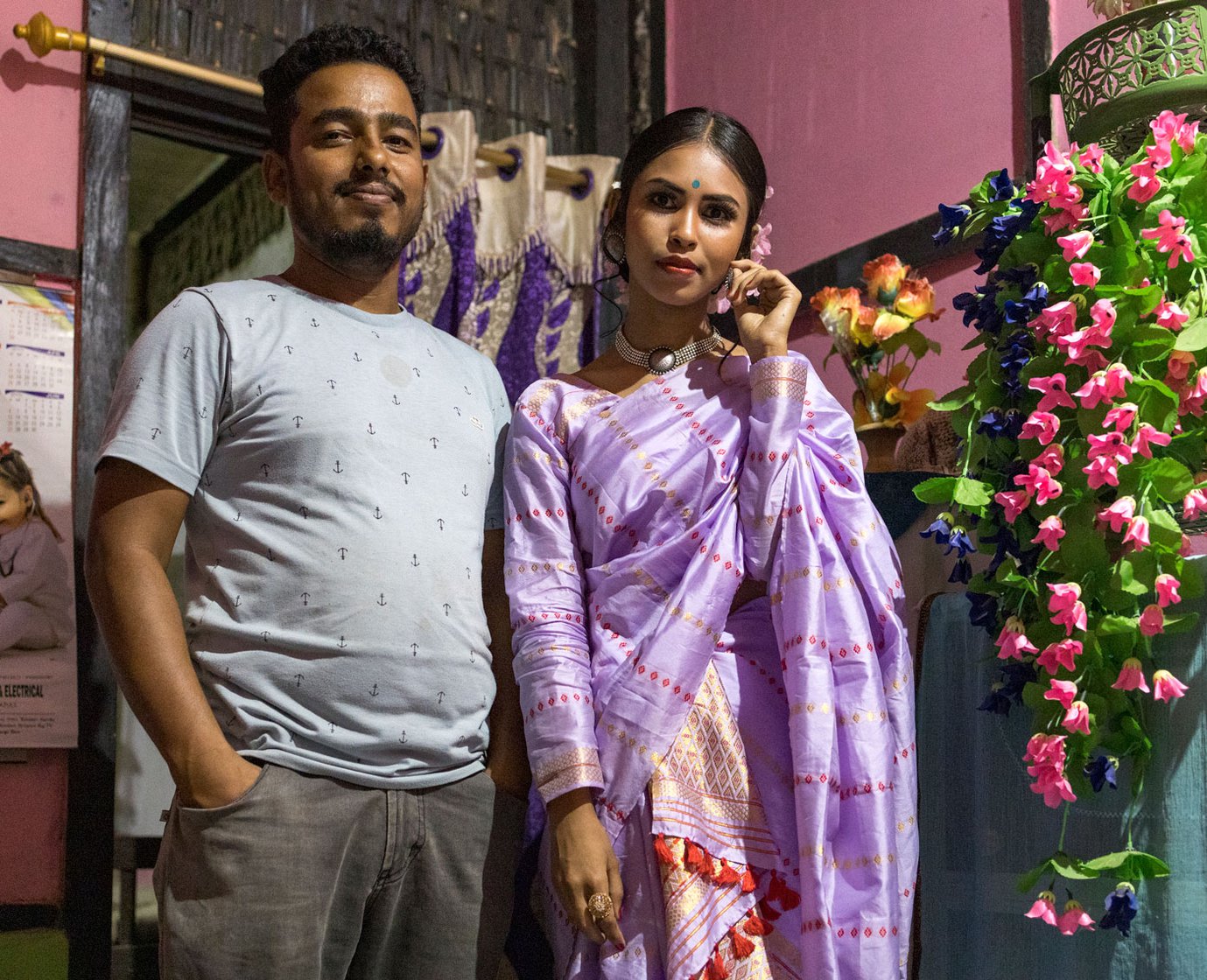 The makeup maestro and the muse

Over another meal at his restaurant on Kamalabari ghat a few days later, Mukta describes his average day to us, speaking in the sweet tone that we are by now quite familiar with.

The preparation to run Hotel Hazarika begins before he even sets foot on the ghat, a place that sees thousands of commuters who travel to and from Majuli on the Brahmaputra every day. At 5:30 a.m. every day, Mukta carries two litres of drinking water, dal , atta , sugar, milk and eggs on his bike and travels from his village, Khorahola, 10 minutes away from the ghat . For seven years, this has been his routine. Up at dawn and on his toes till 4:30 p.m.

Most of the ingredients that go into the food made at Hotel Hazarika are grown at the family’s three- bigha [about an acre] farm. “We grow rice, tomato, potato, onions, garlic, mustard, pumpkin, cabbage, and chillis,” says Mukta. “People come here when they want doodh wali chai [milk tea],” he adds proudly; the milk comes from the 10 cows on his farm.

Watch the video: ‘I like to sing while doing makeup’

“People say, ‘Mukta you cook very well’. That way I feel good and also like running the shop,” says the proud owner of Hotel Hazarika.

But this is not the life Mukta had once envisioned for himself. “When I graduated after studying Sociology from Majuli College, I wanted a government job. But it never worked out for me. So, I started Hotel Hazarika instead,” he says as he makes our tea. “Initially, I was ashamed when my friends visited the stall. They had government jobs and here I was, just a cook,” he says. “I don’t feel shy while doing makeup. I used to feel shy while cooking, but not with makeup.”

So why not focus exclusively on this skill by exploring opportunities in a bigger city like Guwahati? “I can’t, I have responsibilities here in Majuli,” he says, pausing briefly before adding, “Why should I? I want to stay here and make Majuli’s girls look beautiful too.”

The government job may not have come his way, but he says he’s happy today. “I would like to travel the world and see what it has to offer. But I never want to leave Majuli, it’s a beautiful place.”

Sangeeta Menon is a Mumbai-based writer, editor and communications consultant.

Other stories by Sangeeta Menon