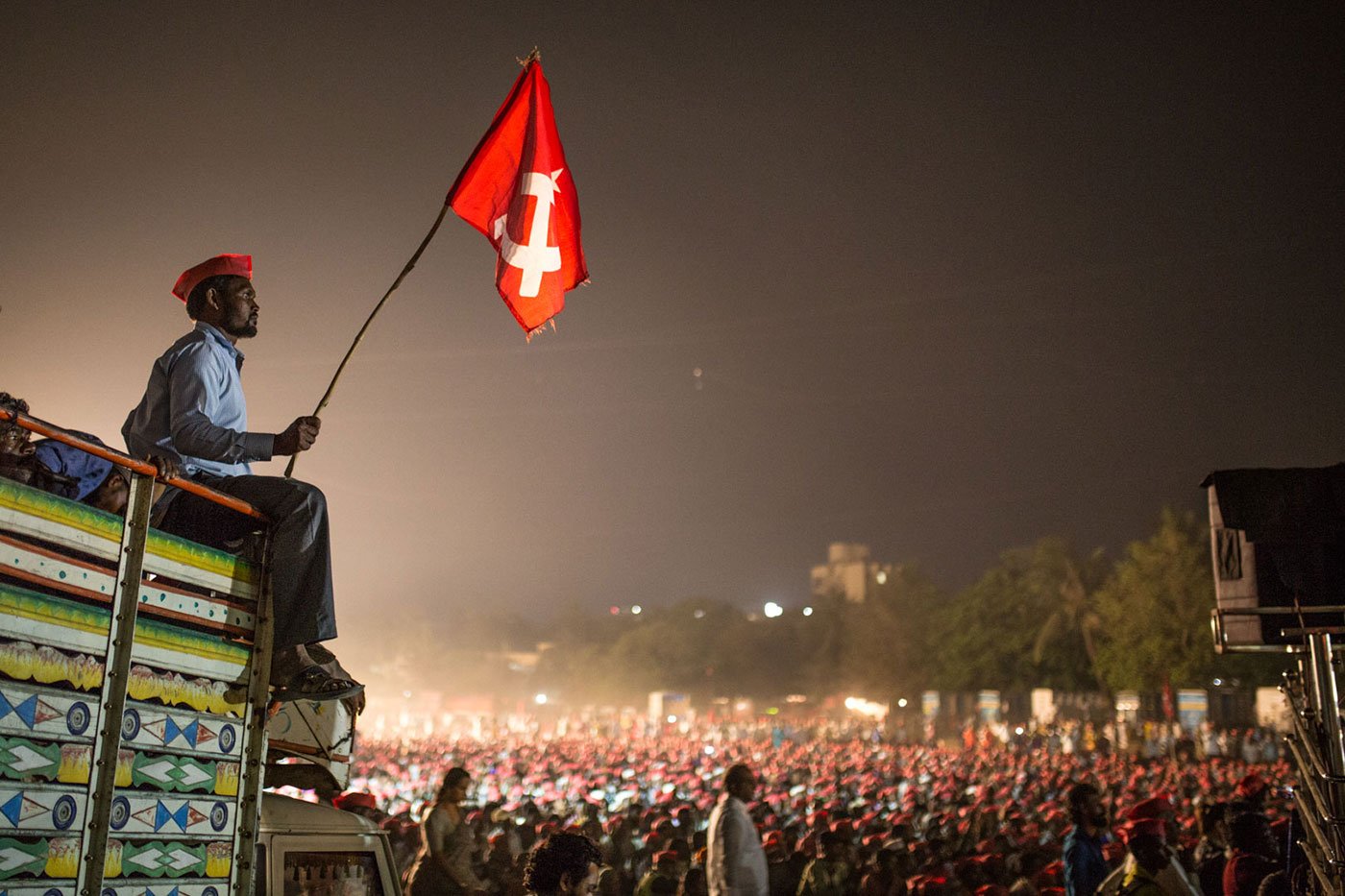 The protesting farmers who assembled at Azad Maidan on March 12, drawing support from Mumbaikars along the way, know they’ve won a battle but not the war – 'We are ready to march again', they say

"Inquilab Zindabad," shouted a farm leader. "Zindabad, Zindabad," the farmers responded. At the end of a gruelling march across 180 kilometres, the exhausted farmers’ chants at Azad Maidan in south Mumbai – where the morcha concluded on March 12 – were less robust than they were in Nashik, where the march began on March 6. But their collective spirit remained unbeaten. Even after a week of walking in the heat, many with blistered and bleeding feet, sleeping out in the open during the nights, eating little food, even then the cries of "Inquilab Zindabad" didn’t go unanswered.

The milestone march, organised by the Akhil Bharatiya Kisan Sabha, the farmers' collective of the Communist Party of India (Marxist), began from CBS Chowk in Nashik town with around 25,000 protesters. By the time the cultivators marched into Mumbai, their numbers had grown to over 40,000, estimates Ajit Nawale, one of the organisers and general secretary of the Kisan Sabha.

All of them exhausted, but with their determination intact.

"The journey is not as unbearable as the treatment meted out to us by the government," said Vilas Babar, resting against a tempo parked at a ground in Bhiwandi taluka ’s Sonale village (around 55 kilometres from Azad Maidan), where the farmers were having lunch on the afternoon of March 10. Dal and rice were being served from huge aluminium vessels to thousands sitting on the ground. The farmers themselves had prepared the food – each taluka they came from had collectively pooled in the grains. 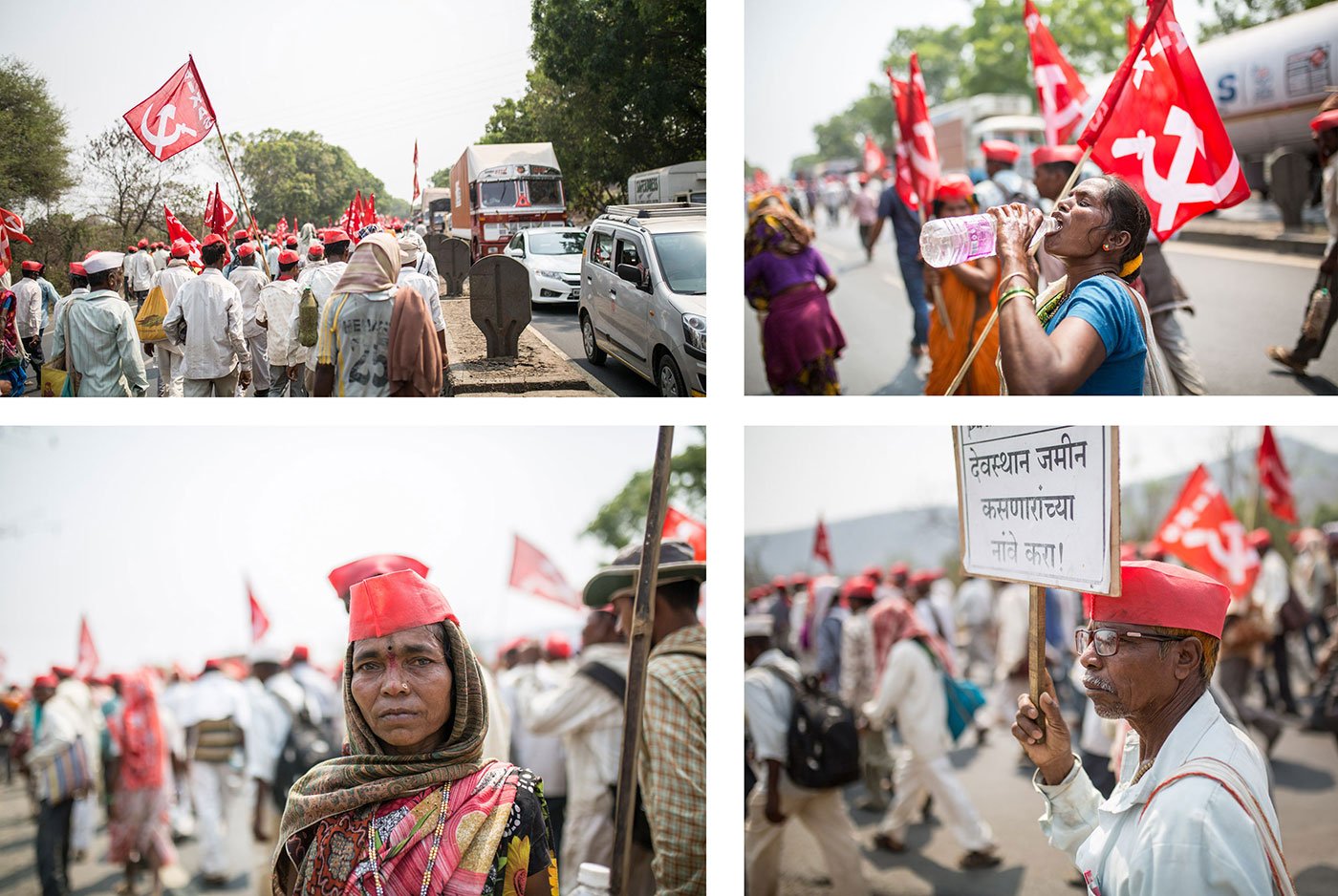 As the farmers' march from Nashik continued, the numbers grew to over 40,000; by the fifth day they reached Bhiwandi, about 55 km from Mumbai

A few hundred metres before we reached the ground in Sonale, a dhaba on the highway served water to the thirsty farmers – four employees of the eatery waiting with jugs of water and glasses, the jugs repeatedly refilled from a nearby drum of water.

The rally had entered its fifth day, and the farmers were still 55 kilometres from their destination in south Mumbai.

Babar, around 45, a farmer from Surpimpari village in Parbhani district of Marathwada, took a train from Parbhani town to Nashik on March 5, and had been on the move since. “What option did I have?” he asked. “The pink bollworm completely infested cotton on my five acre farmland. It [the cotton that was to be harvested] was around 60 quintals. Even if you go by the lowest estimate of 4,000 rupees per quintal, I lost close to 2.5 lakh rupees.” The bollworm attacked the cotton belts of Parbhani and Vidarbha in November 2017, just around the time when cotton is harvested.

Babar also cultivates tomatoes. “I am imploring the traders to procure the harvest at 1 rupee a kilo, but they are not interested [because the price of tomato has dropped so sharply, it has made even the lowest rate unviable],” he said. “The government has to take note of our demands, that include compensation to those hit by the bollworm and hailstorms [the state government estimates that 262,000 hectares were affected by hailstorms in Maharashtra; of these, around 98,500 hectares are in Marathwada, and 132,000 is in Vidarbha's Amravati district],  a minimum support price of 1.5 times the cost of production, a total loan waiver, and the implementation of Forest Rights Act so that tribal farmers can get ownership of their land.” 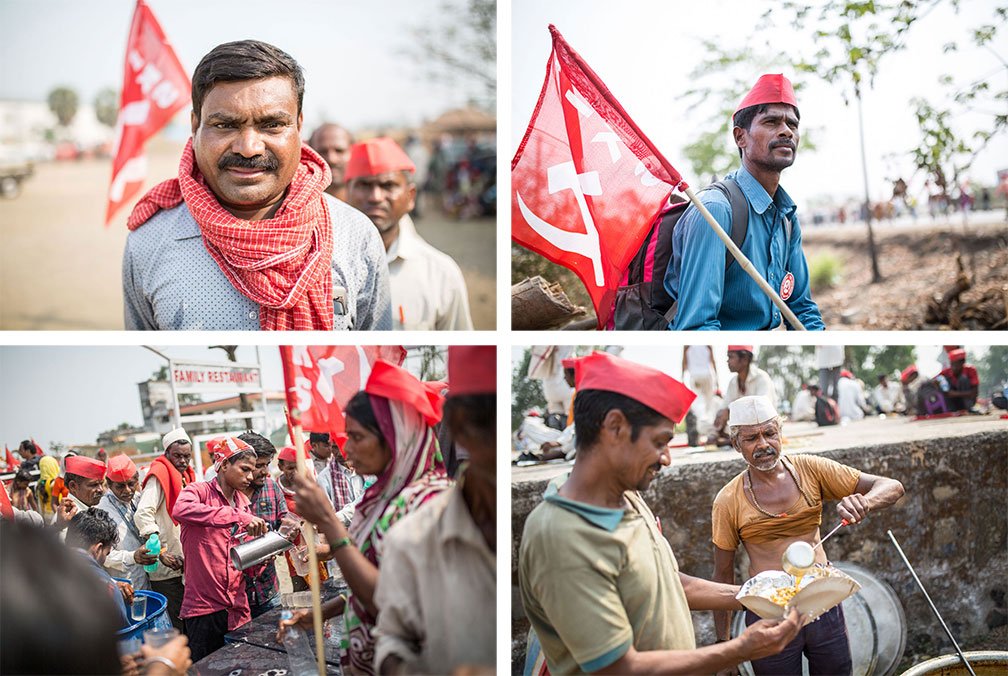 Top: Vilas Babar (left) lost Rs. 2.5 lakhs to a bollworm attack on his cotton crop. Many other cultivators with various concerns marched with red flags. Bottom: The farmers during a break at Sonale in Bhiwandi; they pooled in resources and cooked and shared modest meals

On March 11, after starting out from Thane city at 11 a.m. after a morning meal on March 11 (having walked over 40 kms the previous day) , the farmers reached the KJ Somaiya Ground in Mumbai’s Chunabhatti area around 9 p.m. There, they had planned to camp for the night. So Babar thought he was done for the day. “I have had cramps in my legs since morning,” he said, as the protestors poured into the ground, where the leaders of several political parties made long speeches, delaying the dinner of the weary farmers. “Tomorrow is the final leg,” he said.

However, March 12 was a day when Secondary School Certificate (SSC) students would take their exams in Mumbai. The Kisan Sabha leaders discussed this, and decided around 11:30 p.m. to resume walking after midnight, so that the march would not hold up traffic, and students, the next day. Babar had just reclined on a blanket, but his rest was cut short – he took a nap for an hour, then picked up his blanket, put it back in his shoulder bag, and was ready to start again at 1 a.m.

Dignified in their desperation, the fatigued farmers started trudging towards Azad Maidan, and reached the venue by 5 a.m. So except for a short break in Vikhroli around 3 p.m., and an hour and a half for dinner and some rest at the KJ Somaiya Ground – they had been walking for 14-15 hours of 18 hours by the time they reached south Mumbai.

All along their route in Mumbai, the  farmers received a heartwarming welcome from the city – individuals, residents’ associations, religious groups and political parties queued up to offer water, biscuits and bananas at various junctions on the Eastern Express highway and further into town. 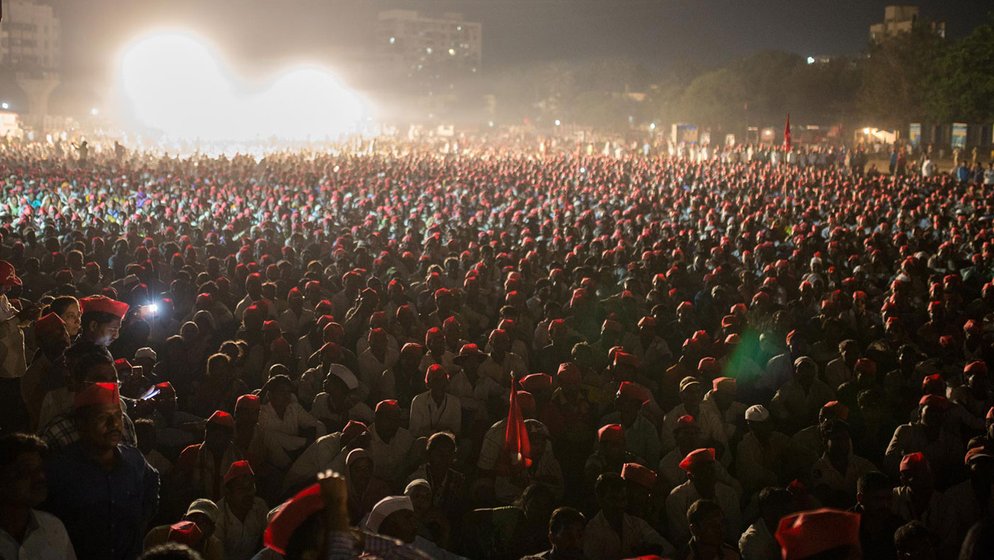 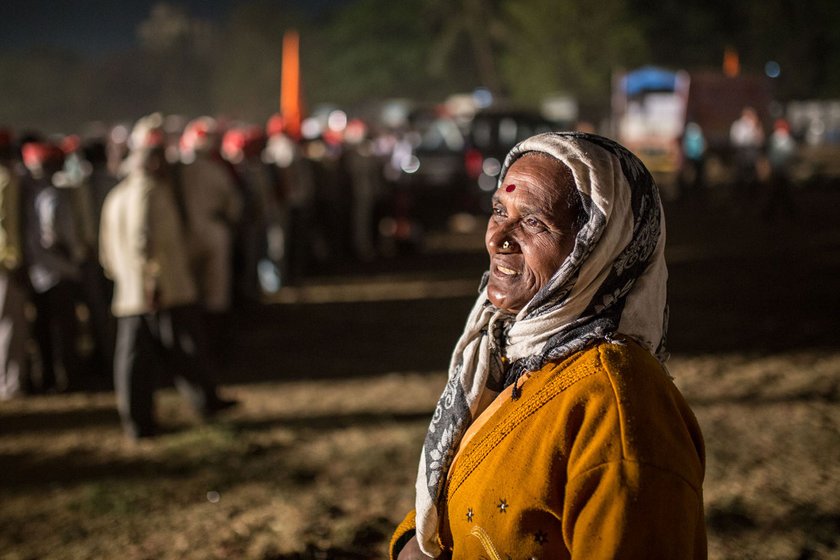 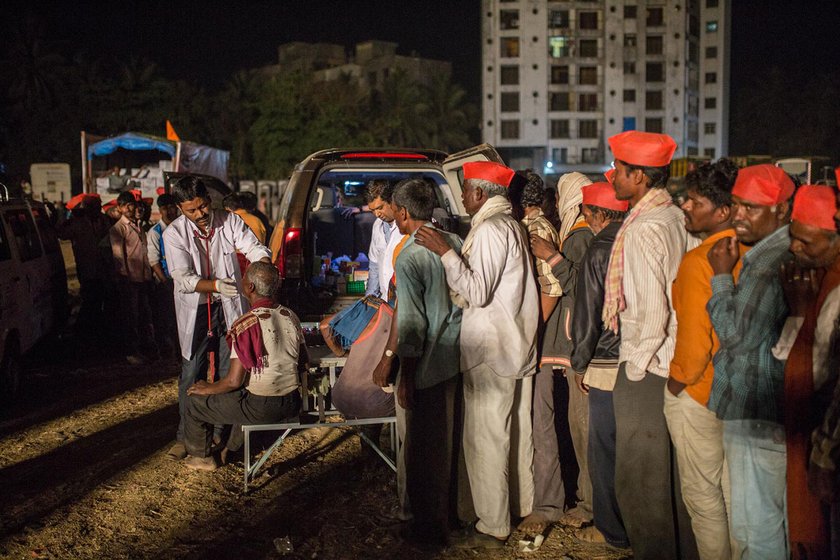 The last break before Azad Maidan was in Chunabhatti. That night, many like Kamalabai Gaikwad (centre) took help for their torn feet from a van dispensing medicines

At the Somaiya ground, I also met Kamalabai Gaikwad, 65, just before midnight, as she walked up to a van distributing painkillers. “There is no other way to continue,” she smiled. She had walked barefoot from Nashik’s Dindori village. The next day when I saw her, she was wearing chappals , a little too big for her worn-out feet, but still, some footwear in the blistering heat. “Someone gave these to me today morning,” she said.

Though more and more protesters – with farmers from Dahanu, Marathwada, Shahapur and other places – walking along  as the march progressed, a significant number of the participants were Adivasi farmers from Nashik district, who had started out on March 6. Their main demands are ownership of land and irrigation facilities.

Sindhubai Palve, in her 50s, said it is high time she got a land title. “We toil on our land and one day someone might take it away from us,” she said. Sindhubai, who belongs to the Kol Mahadev Adivasi community, had come from Surgana taluka ’s Karvad hamlet. “Why can’t we get what is ours?” she asked, “Also, the [Nar-Par and Damanganga-Pinjal] river project will eat into the land in Surgana [and will displace Advasi farmers].” (See They run the farm, they made the March )

Sindhubai, who I met first in Bhiwandi and then at Azad Maidan, like many in the march, was walking with cracked feet and blisters, applying a medicinal cream – given to her by an ambulance accompanying the march – every night. “I have three acres of land, where I cultivate rice,” she said, sweating. “But we do not have enough water. We cannot sustain by solely depending on monsoons.” 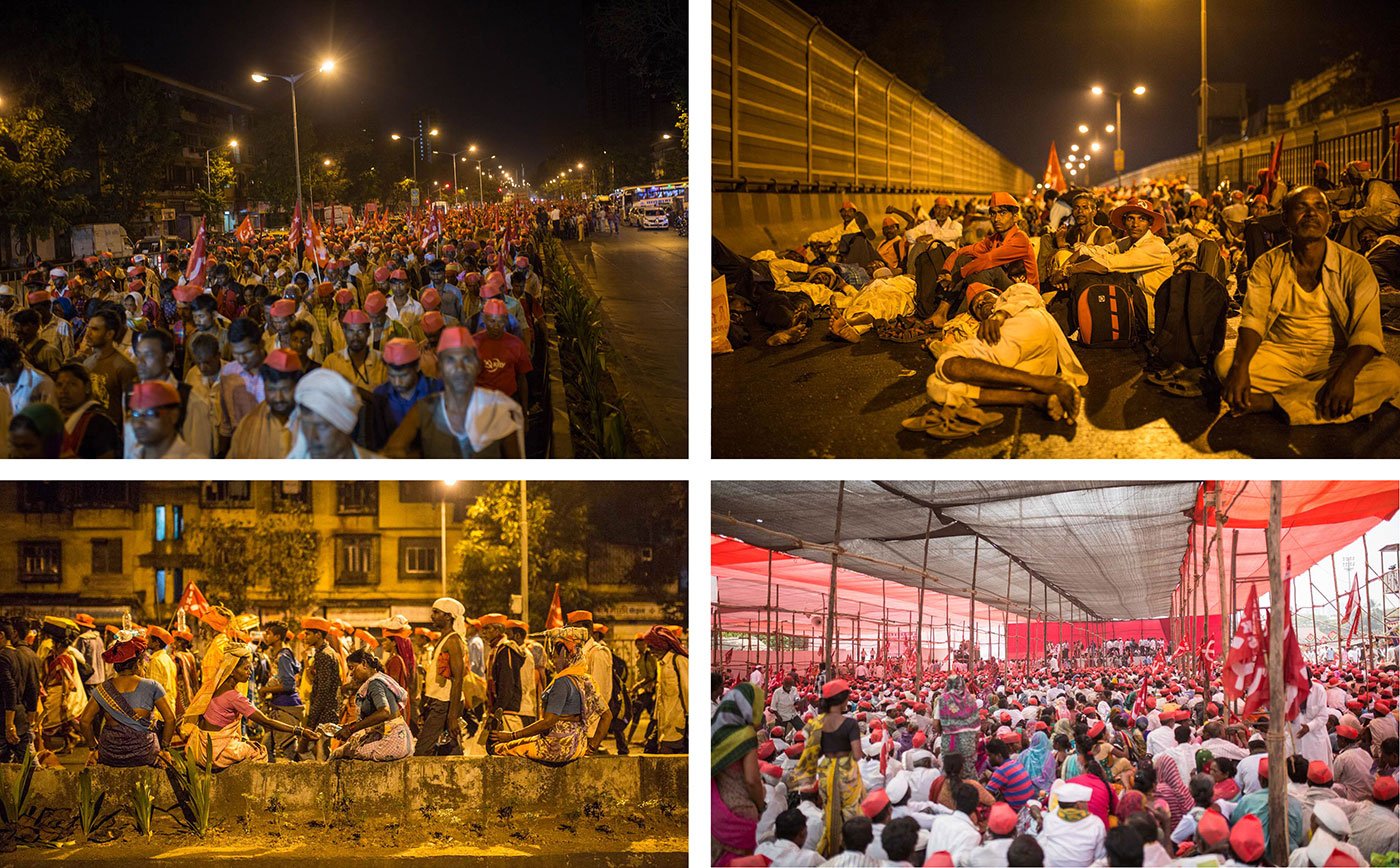 The farmers left Chunabhatti for Azad Maidan after midnight on March 11 so as to not disrupt students appearing for their SSC exams the next morning. Bottom right: At Azad Maidan, the farmers listened to speeches by CPI (M) leaders while a small delegation met the chief minister

When the morcha reached Azad Maidan, amid the ocean of red flags and caps, several journalists from television channels and newspapers tried to speak to the farmers. But the farmers were so exhausted that many refused to talk, and requested they be left alone while they listened to the speeches of CPI(M) leaders on the stage.

By the evening of March 12, the chief minister of Maharashtra, Devendra Fadnavis, said the government is “sensitive” to the farmers, and will give a written draft of the solutions to their concerns within two months. The delegation of farm leaders that met Fadnavis then decided to cancel their plans of encircling the Vidhan Sabha building. The farm leaders who negotiated with the state government called off the protest after Fadnavis gave his assurances in writing, and promised to table them in the Assembly. ( See After the March, the aftermath… )

The success of the march was evident not only from the government’s announcements. Three of its ministers actually showed up at Azad Maidan to tell the marchers that their major demands on Maharashtra’s aborted loan waiver, the change in the period it covers, and on the forest land rights of Adivasi farmers, had been conceded. The government also set up a six-member cabinet committee to quickly enforce these and pursue the other remaining issues such as pricing, health facilities for farmers and labourers, and more.

When the decision to conclude the march was announced, Sindhubai said, simply, “We trust our leaders” and got ready to catch one of the two trains arranged by the Central Railways from CSMT to Bhusawal later in the night. “We will see if the government acts on its promises. If not, we are ready to march again.”