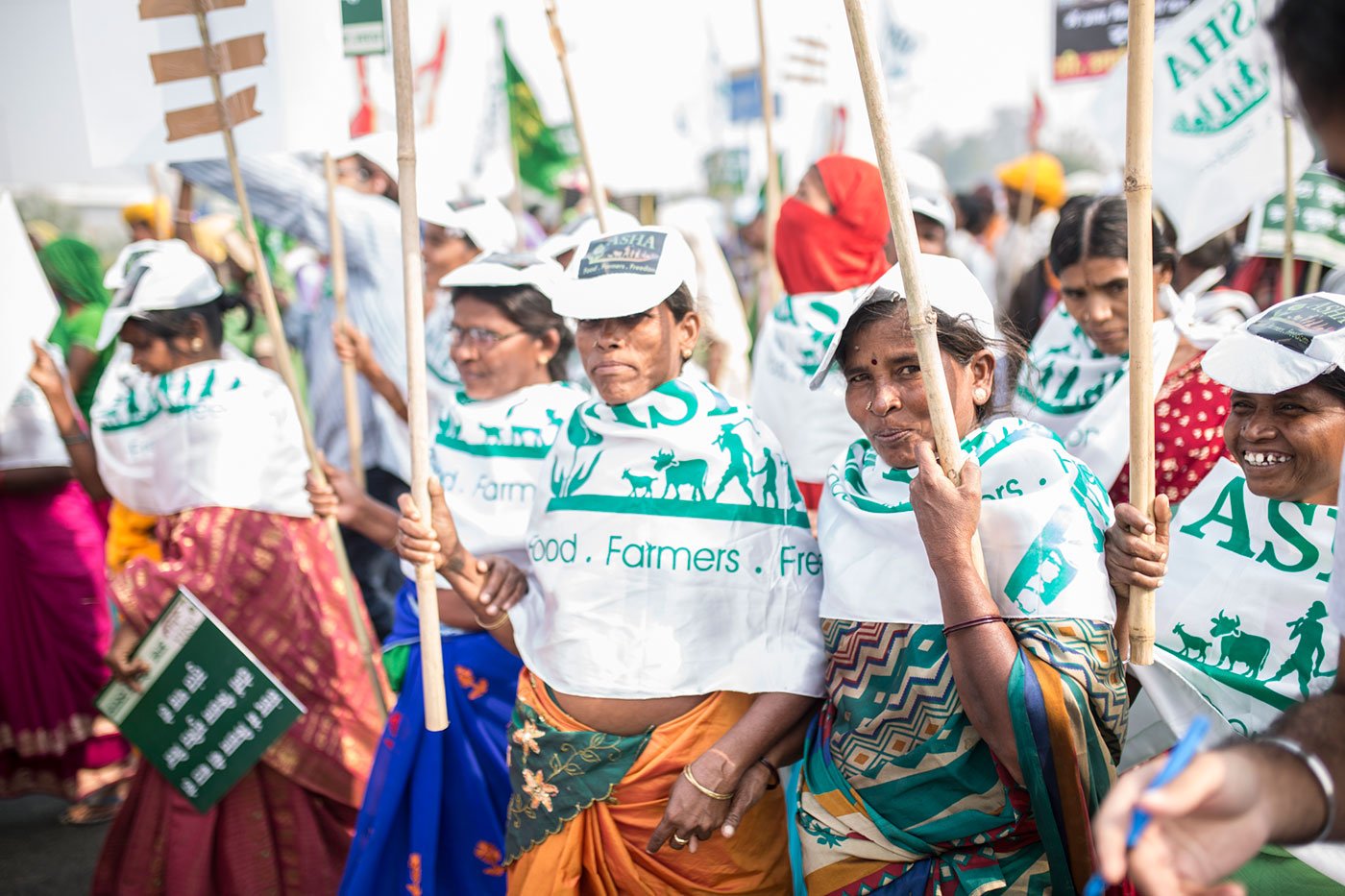 Voting with the ballot and with their feet

After voting in the Assembly elections in Madhya Pradesh, many farmers took the train to the capital for the march, saying 'nobody paid attention to us in MP, so we thought we should make ourselves heard in Delhi'

Ukar lives in Manasya village in Petlawad taluka of Madhya Pradesh’s Jhabua district. The nearest railway station is Indore – approximately 150 kilometres away. The train from Indore takes over 14 hours to reach Delhi. “I packed my clothes the night before, asked my wife to prepare food for the journey in the morning,” he said, holding a stick, sitting in the campus of Gurudwara Shri Bala Sahibji in Delhi on November 29. “I voted and left home at noon. Managed to reach Indore by bus in the evening, from where I took an overnight train.”

The polls in Madhya Pradesh for the assembly elections were held on November 28, and on November 29 the All India Kisan Sangharsh Coordination Committee, an umbrella organisation of 150-200 farm groups and unions, brought around 50,000 farmers from across the country to the capital. They came to participate in a two-day protest march, demanding a 21-day session focusing on the country’s agrarian crisis. The crisis has driven more than 300,000 farmers to suicide across India between 1995 and 2015. 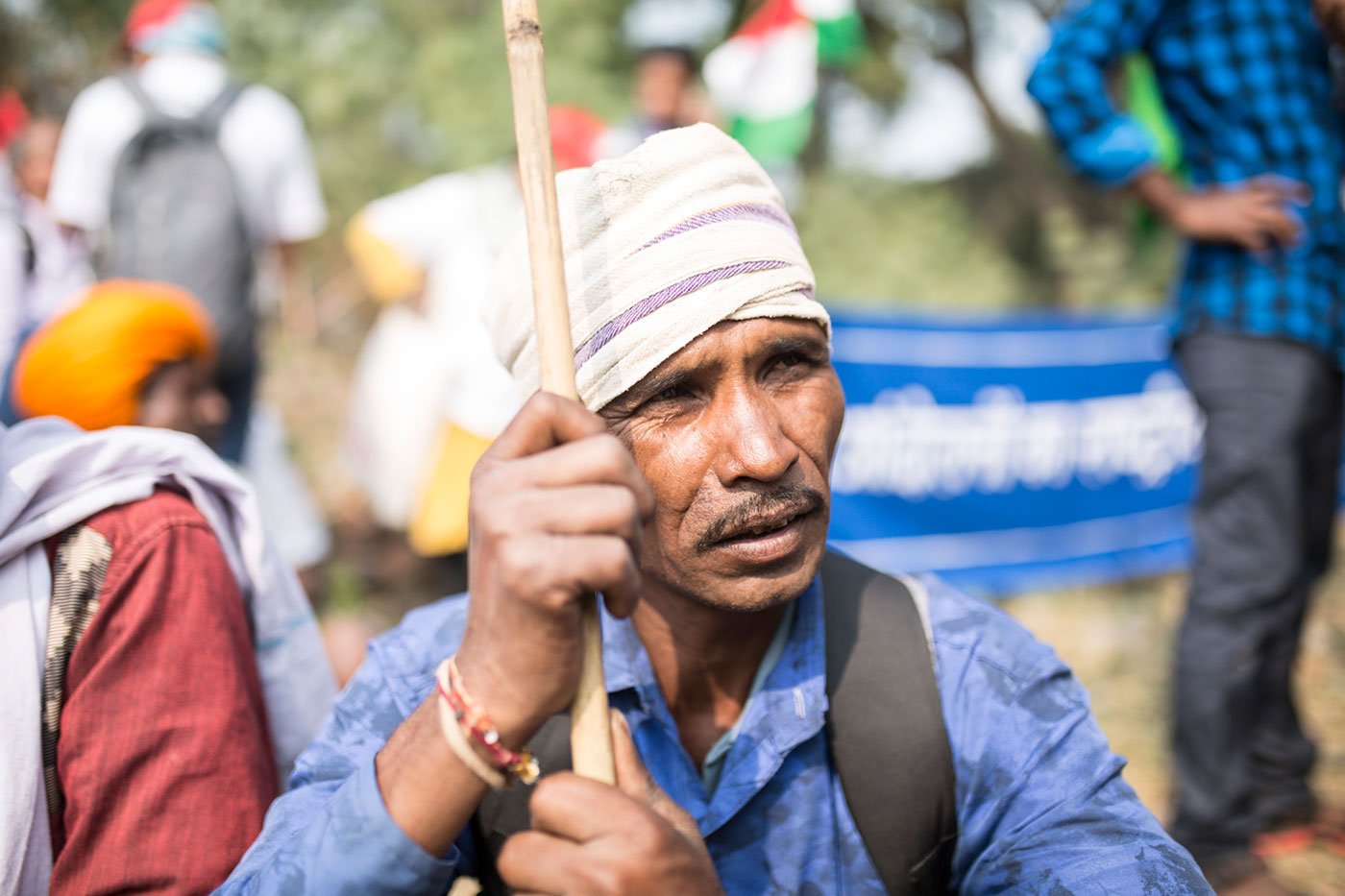 Ramesh Ukar of Manasya village said, 'I had to vote. And I had to reach Delhi the next day'

In Madhya Pradesh, more than 11,000 farmers have committed suicide between 2008-17, according to the National Crime Records Bureau. “We are struggling,” said Ukar, as farm leaders addressed farmers from across the country assembled at the Gurudwara. A speaker mentioned how the likes of Vijay Mallya and Nirav Modi manage to flee after swindling thousands of crores. “He is right,” Ukar adds. “Narendra Modi and Shivraj Singh Chouhan [the present chief minister of Madhya Pradesh] have done nothing for farmers. I had to make my vote count. The rich get benefits while we get bullets.”

Ukar, who mainly cultivates soyabean in his two-acre farmland, said, “The seeds cost Rs. 4,000 per quintal. The harvest is sold at around Rs. 2,000 per quintal.” He mentioned the Mandsaur agitation of May 2017, where state police fired on protesting farmers demanding better rates for onions, killing six. “How will a farmer make his living if onions are sold at Rs. 1 per kilo?” asked Ukar.

Around 120 farmers from 4-5 villages around Manasya arrived on the morning of 28 November. “If the march had happened a few days after the polling date, a lot more people would have come,” said Ukar. “Farmers in the state are in really bad shape.”

Ironically, the Madhya Pradesh government claims to have recorded agriculture growth of nearly 20 per cent in the past few years. The state has recently received the Krishi Karman Award of 2016 from the president of India, five years in a row.

Kedar Sirohi, farm leader from Bhuvan Khedi village of Harda district, who too came for the Delhi march, said the agriculture growth numbers are inaccurate. “There is a difference between growth on paper and growth on the ground,” he said. “If agriculture is prospering in Madhya Pradesh, why are farmers committing suicide? Why are farm loans rising? Why are farmers defaulting on their loans? This government is an anti-poor government, which does not think of farmers and labourers.” 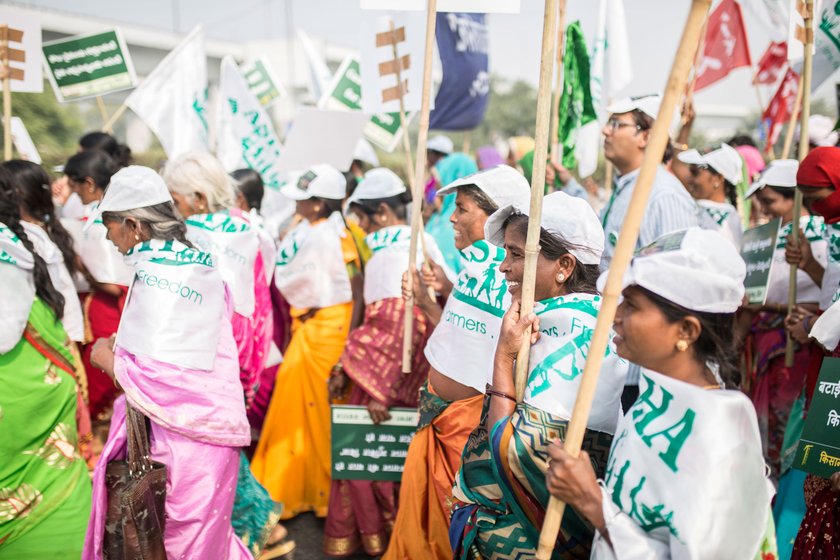 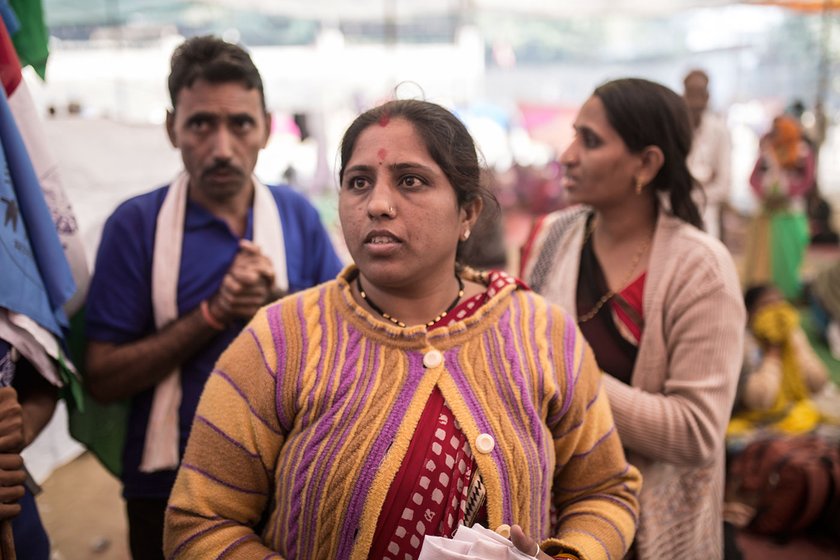 The following day, on November 30, around 200 workers from and around Khargone in Madhya Pradesh arrived at Ramlila Maidan, where farmers across the country had gathered before marching towards Sansad Marg (Parliament Street) in Delhi. The workers lost their jobs after the yarn and denim unit of Century Textiles and Industries Limited entered into a sale deed with another company in August 2017. “Around 1,500 of us lost jobs,” said Sharmila Mulewa, 45, from Satrati village in Kasrawad taluka of Khargone district. “My husband was one of them. They employ us for five months, sack us for a month, and then hire again to make sure they do not give us permanent jobs. Since we were temporary workers, they told us we were not needed.”

The Textile Mazdoor Union of Khargone went to the courts and filed a complaint under the Industrial Disputes Act (of 1947). In May this year, the Indore High Court ruled in favour of the workers, directing the company to provide them work. “But the order has still not been followed,” said Mulewa. “My husband used to make around Rs. 10,000 per month. The income suddenly stopped. Since then, we have been protesting in front of the gate of the company.”

The workers even met Shivraj Singh Chouhan a few months ago. He told them the government would respond in some days – but no one has responded. Mulewa said she felt so strongly about the workers' crisis that she left her 10-year-old son back home to participate in the march. “I have never done that before. In fact, this is only the second time I have boarded a train. We did it because the march was about holding the government accountable. Since nobody paid attention to us in Madhya Pradesh, we thought we should make ourselves heard in Delhi.”