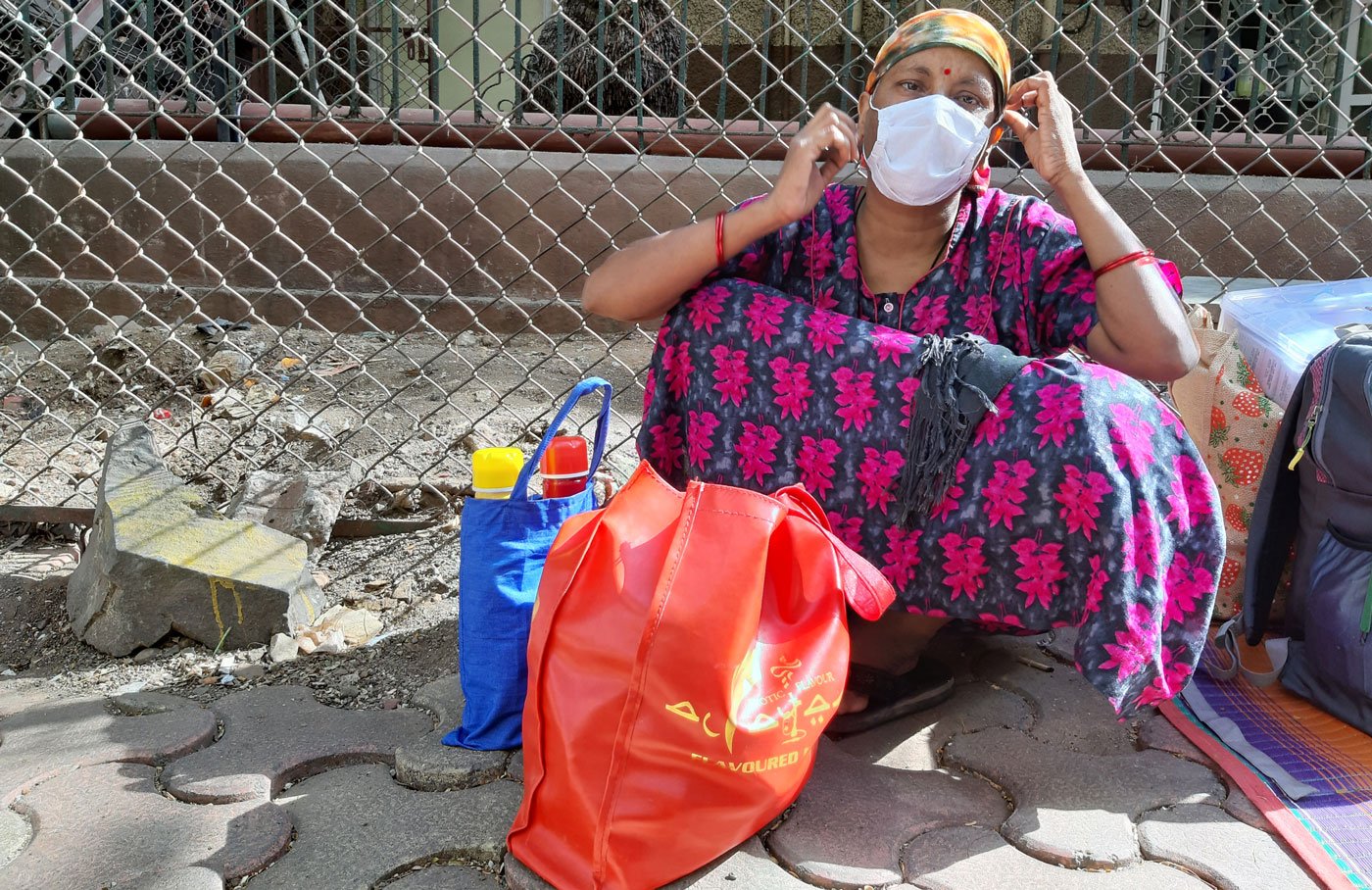 Hit with cancer, Covid-19 and without shelter

Geeta and Satendar Singh came to Mumbai from Maharashtra’s Kolhapur district for Geeta’s cancer treatment. Living on the footpath near Tata Memorial Hospital, both have tested positive for Covid-19

“Geeta was in pain, she felt feverish and was fainting. By the next day she was vomiting heavily – I panicked,” says Satendar Singh.

By the next day, Sunday, May 17, Satendar didn’t know what to do. He phoned an ambulance driver working with a charitable trust to help them reach Tata Memorial Hospital. As soon as they got there, Geeta was taken to the casualty ward where the doctors did a test for Covid-19. Her test result came back positive on Monday.

Geeta has stomach cancer. Around two weeks ago, she and Satendar had moved back to the footpath near the philanthropic Tata hospital in central Mumbai’s Parel area. For some weeks before that, they had been staying in Dombivali, around 50 kilometres from the hospital, at a relative’s place. That arrangement had come after a lot of pleading, and assurances of paying the relatives for food and rent.

Geeta, 40, and Satendar Singh, 42, came to Mumbai from Ichalkaranji town in Maharashtra’s Kolhapur district in November. Their 16-year-old son, Badal, and 12-year-old daughter, Khushi, have been living with Satendar’s elder brother Surendra in Ichalkaranji. Around a decade ago, the family had migrated to Maharashtra from Kaniyari village in Dinara block of Rohtas district in Bihar. Satendar worked in a powerloom factory in Ichalkaranji, earning Rs. 7,000 a month until he left for Mumbai with Geeta.

“We promised our children we would return soon, but now we don’t know when we will see their faces,” Geeta had told me in March.

When they came to Mumbai in November, they stayed in the northern suburb of Goregaon, with Satendar’s cousin. But with the fear of Covid-19, the cousin had requested that they leave. “We were staying at stations and on this footpath [after that],” Geeta had told me when I met them on March 20. Then they moved to Dombivali. (See Locked down with cancer on Mumbai’s footpaths ) 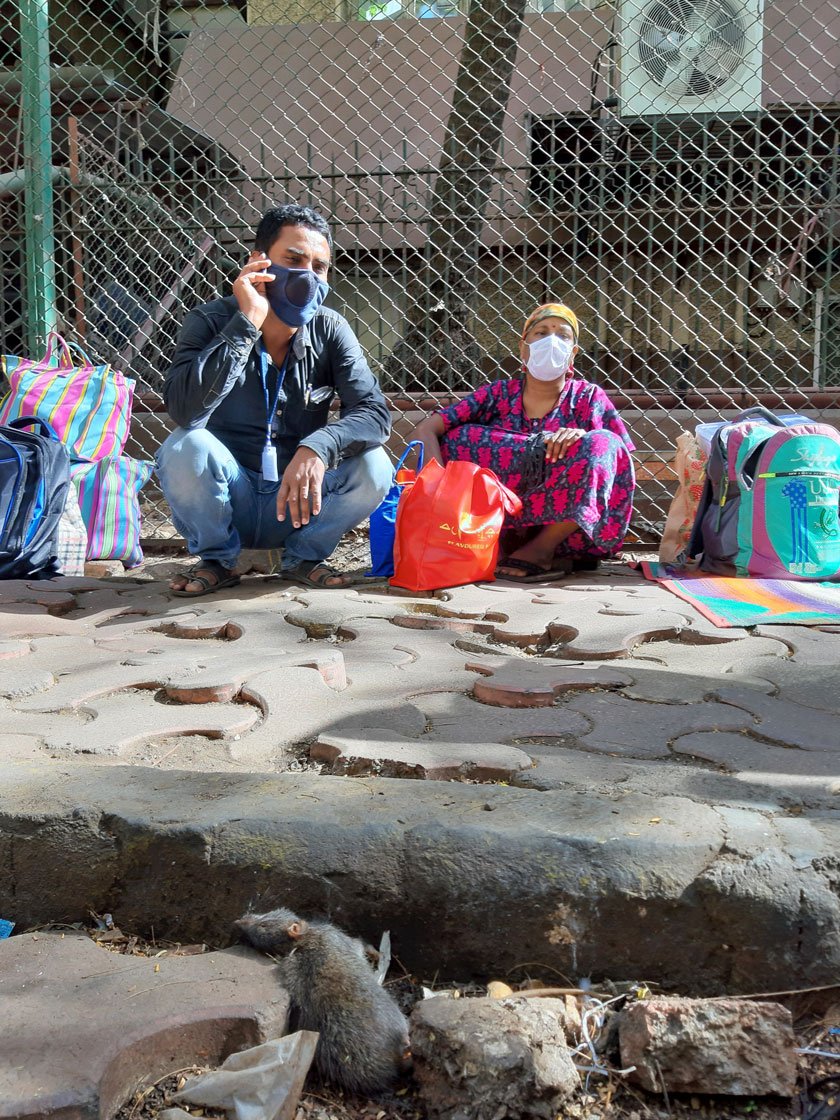 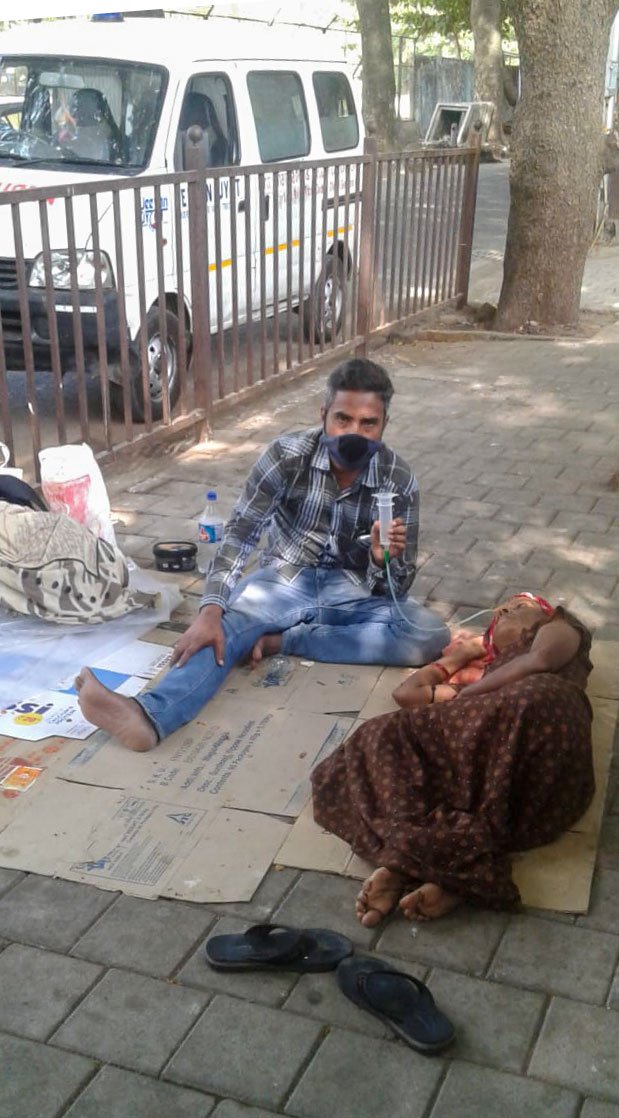 Satender and Geeta Singh lived on the footpath for two days, where rats scurry around, before shifting to their relative's place in Dombivali (left). They had moved back to the footpath outside Mumbai's Tata Memorial Hospital two weeks ago (right)

After PARI published the story about the patients and their families living on pavements outside the hospital even as the lockdown unfolded at the end of March, they received money from individual donors. A charitable trust offered ambulance assistance to Geeta and Satendar, which helped them reach the hospital from faraway Dombivali, for Geeta’s chemotherapy and check-ups.

But as Covid-19 cases started increasing in the city, the ambulance was called for other rounds. Satendar and Geeta started commuting by bus. In the last two months, they travelled to Parel some 7-8 times for Geeta’s chemotherapy. And made several other trips for check-ups, CT scans and other tests.

The commute was extremely difficult. They would start at 6:30 a.m., take a state transport bus to Parel, then take a BEST bus to reach the hospital by around 9:30 a.m.  But without a mandatory lockdown travel pass given by local police chowkies , they were forced to leave the bus many times — and then their journey took an hour longer, waiting for the next bus. “We were told to get off in the middle of the road.  I had got a letter from the hospital, but the bus conductors wanted a pass from a government official. No one wanted a patient on the bus,” says Satender.

The same long journey was repeated in the evening – they would start at around 5 p.m. and reach Dombivali only around 9 p.m. At times, for the shorter distance to and from the Parel bus stop and the hospital, Satender would plead with taxi drivers to ferry them. He says he spent at least Rs. 500 a day on the commuting.

The hospital takes care of a portion of Geeta’s medical expenses, the rest have come from Satender’s savings – he estimates he has spent a total of at least Rs. 20,000 so far.

At the end of April, one of the medicines affected Geeta badly, Satender says, and she kept throwing up, unable to eat anything. The doctors had to put a tube through her nose for the food to be ingested. That didn’t help much, and Geeta is still is not able to digest much. Unable to continue with the nearly impossible commute, Satender asked the hospital staff to help them find a place in a nearby shelter home. “I was told that no rooms were available,” he says.

With the help of his brother in Ichalkaranji, on May 5, he got a letter from a government official endorsing their need for a shelter home. “I thought now someone will listen and help me, but I don’t know what to say...” Satendar says. 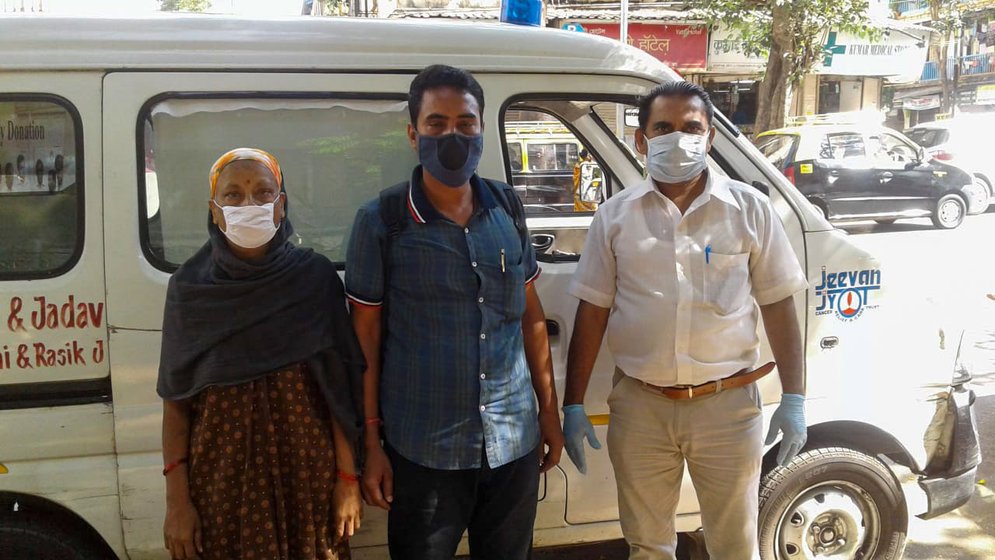 For a while, a charitable trust offered ambulance assistance to Geeta and Satendar to reach the hospital from faraway Dombivali

“We went to few shelter homes with the letter, but they turned us away, stating that they had strict warnings from the BMC and police to not allow any new patients,” says Abhinay Lad, the ambulance driver, who has been helping the couple. “We understand their compulsions too.”

It was then that, left with no option, around 10 days ago, Satender and Geeta returned to the footpath outside the Tata Memorial Hospital. The charitable trust that had arranged for the ambulance (Jeevan Jyot Cancer Relief and Care Trust) provided them meals.

When Geeta’s Covid-19 test results came back positive, she was taken into a quarantine room in the hospital. “She could not even walk. I can’t leave her now, there are pipes attached to her,” Satendar said.

He too was asked to do the test in Kasturba Hospital, around three kilometres from Tata Memorial. But he remained adamant about staying with his wife. On May 21, he was tested at Tata hospital itself, and the result came on May 23, Saturday evening, that he too is positive for Covid 19. Satender continues to stay by Geeta’s side in the quarantine ward.

He has been feeling weak, and attributes it to the running around and many sleepless nights. “I will get better,” he says. He has been told that Geeta’s surgery is possible only after she turns negative.

Dr. Yogesh Bansod, Senior Resident in the Surgical Oncology department at the hospital, who has been handling Geeta’s case, says she needs a total gastrectomy surgery – removal of the stomach. Talking on the phone, he said, “Her haemoglobin was not even half of what it is supposed to be. Taking up surgery with this low level will be dangerous for her. And her chances of getting respiratory tract infection have to also reduce. We can only hope that Covid doesn’t do much damage to her.”

Satendar has told 16-year-old Badal about the Covid-19 test results. “If I tell my daughter she will not understand and will cry,” he says. “She is small, it’s already been months since they have seen us. I have said we will come soon. I don’t know if I am lying or not…"

Till then Badal has promised his father he will take care of everything back home.