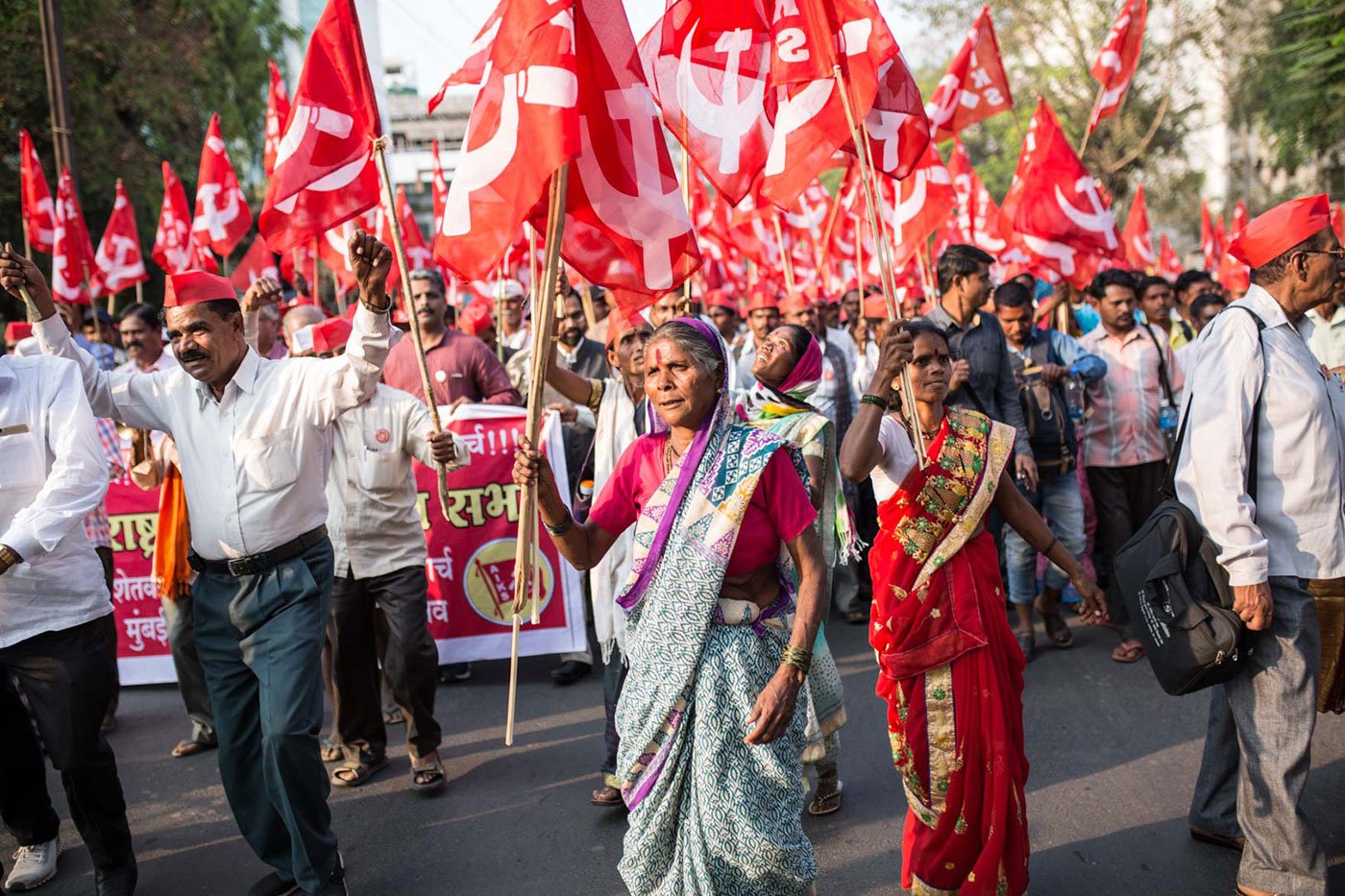 From farm and forest: Long March to Mumbai

Tens of thousands of farmers are marching on Mumbai to encircle the Assembly and press for demands they feel the government has betrayed them on: crop prices, a loan waiver, forest rights, procurement and more…

Shankar Waghere flings his plastic bag on the ground and hunches over on his wooden cane to gather his breath. Then he kneels down, panting, and closes his eyes. They remain shut for the next 15 minutes. It’s been a lot of walking today for this 65-year old. Around him, in the darkness, are some 25,000 other farmers.

“We have to fight for our rights,” he says, sitting on the Nashik-Agra highway in Igatpuri’s Raigadnagar locality. It is the first halt of a massive farmers’ morcha that began in Nashik town on March 6, on a busy Tuesday afternoon. The farmers plan to reach Mumbai on Sunday, March 11, and encircle the Legislative Assembly building the day after – to protest against the state government’s failure to fulfil its promises. (See Long March: Blistered feet, unbroken spirit and After the March, the aftermath… )

The Akhil Bharatiya Kisan Sabha, the farmers’ collective of the Communist Party of India (Marxist), has called for this long march. One of the organisers, Ajit Nawale, general secretary of the Kisan Sabha, says the government cannot get away with hollow words. “In 2015, we had protested for the farmers to get their [rights to the] forest land, better rates for crops, a loan waiver and so on,” he says. “The government is merely pretending to fulfil its promises. This time it is now or never.” 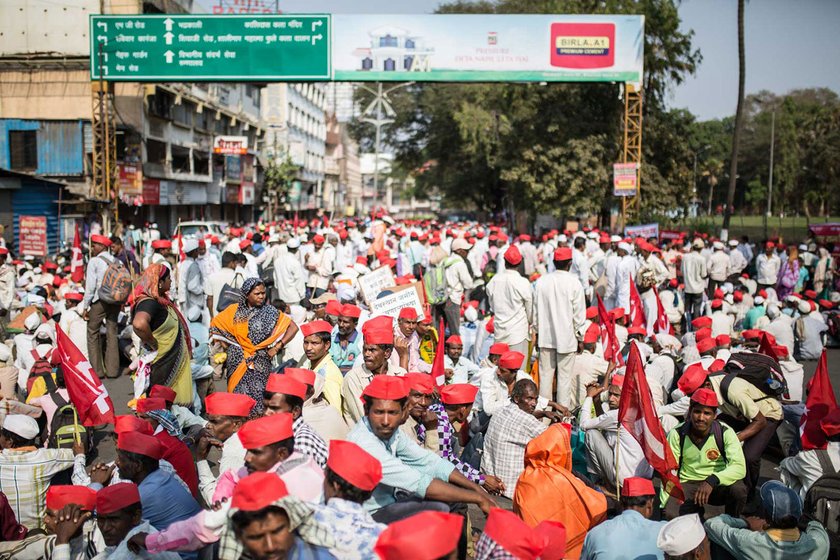 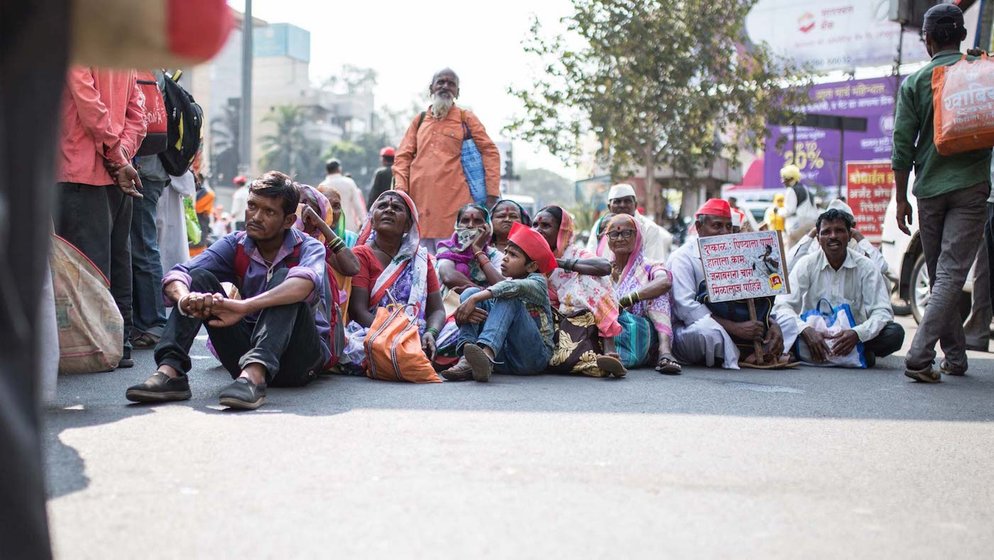 Thousands of farmers started the morcha from CBS Chowk in Nashik on March 6, to highlight their demands, which the government has repeatedly ignored

As the march moves along, more farmers from across Maharashtra – from Marathwada, Raigad, Vidarbha and other districts – are expected to join and the numbers are likely to multiply by the time the morcha reaches Mumbai, 180 kilometres from its starting point. For now, most of the farmers already on the move are from Nashik district and nearby areas, many of them from Adivasi communities. (See They run the farm, they made the March )

Waghere, from the Koli Mahadev community, has come from Nalegaon village in Dindori taluka of Nashik. Earlier in the day, he reached CBS Chowk in Nashik – 28 kilometres from Nalegaon – by foot. The long walk to Mumbai began from this chowk later that afternoon. 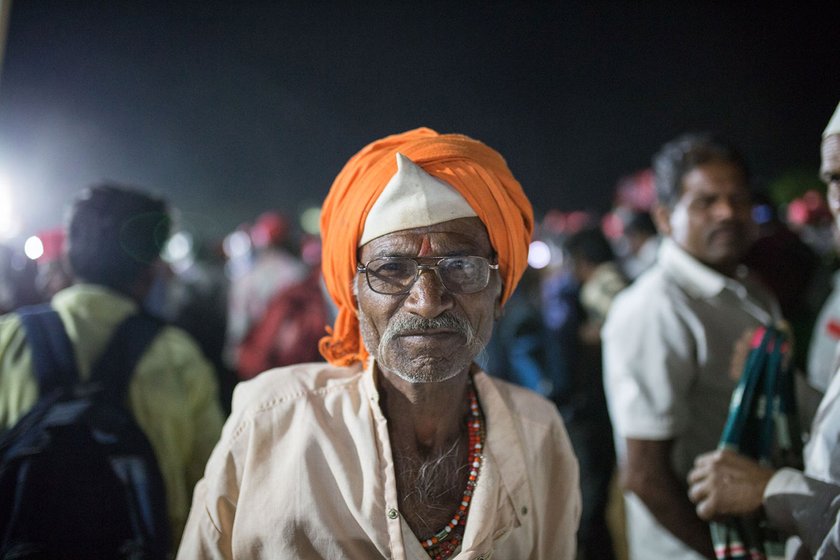 'We have to fight for our rights', asserts 65-year-old Shankar Waghere

“We have been cultivating the land for generations, yet it still comes under the forest department,” he says. “In spite of promises [to give land rights to Adivasi farmers under the Forest Rights Act of 2006]  we are not owners of the land.” In Waghere’s village, almost everyone cultivates rice. “The production cost for an acre is 12,000 rupees. If the rains are good, we get 15 quintals of rice [per acre],” he says. “The current [market] rate is 10 rupees a kilo [Rs. 1,000 per quintal]. How will we sustain? When I got to know of the march, I decided I will participate, come what may.”

When I reach CBS Chowk at 1 p.m., the crowd is still sparse, waiting. Gradually, jeeps full of farmers start pouring in, filling up the entire street with a sea of red flags and caps. Some of the men have wrapped handkerchiefs around their foreheads, the women have covered their heads with sarees as shields against the hot sun. Most of the people here are carrying plastic bags or shoulder bags containing clothes, and wheat, rice, bajra and a few other food grains to last for the week-long march.

By 2:30 p.m., the men and women dip into their bags and bring out chapatis and sabzi wrapped in newspapers. They sit on the road to eat their lunch. Nearby, other Adivasi farmers  are singing traditional folk songs to pass the time. Balu Pawar, Vishnu Pawar and Yevaji Pithe, all from Pangarne village in Surgana taluka of Nashik district, are putting on a show. Sitting on the divider of the street, which has now been cordoned off by the police, Balu is on a tuntuna , Vishnu is playing the dafli and Yevaji is in charge of the cymbals. “What are you signing?” I ask them. “It is a tribute to Khandaraya, our deity,” they say.

The three musicians also belong to the Koli Mahadev community, and their grievances are similar to Waghere’s. “I till five acres of land,” says Vishnu. “Technically, it is mine. But I feel I am at the mercy of the forest officials. They can come and displace me anytime. In the neighbouring village, the officials started digging and planting trees where some of the farmers cultivated rice. We could be next.” 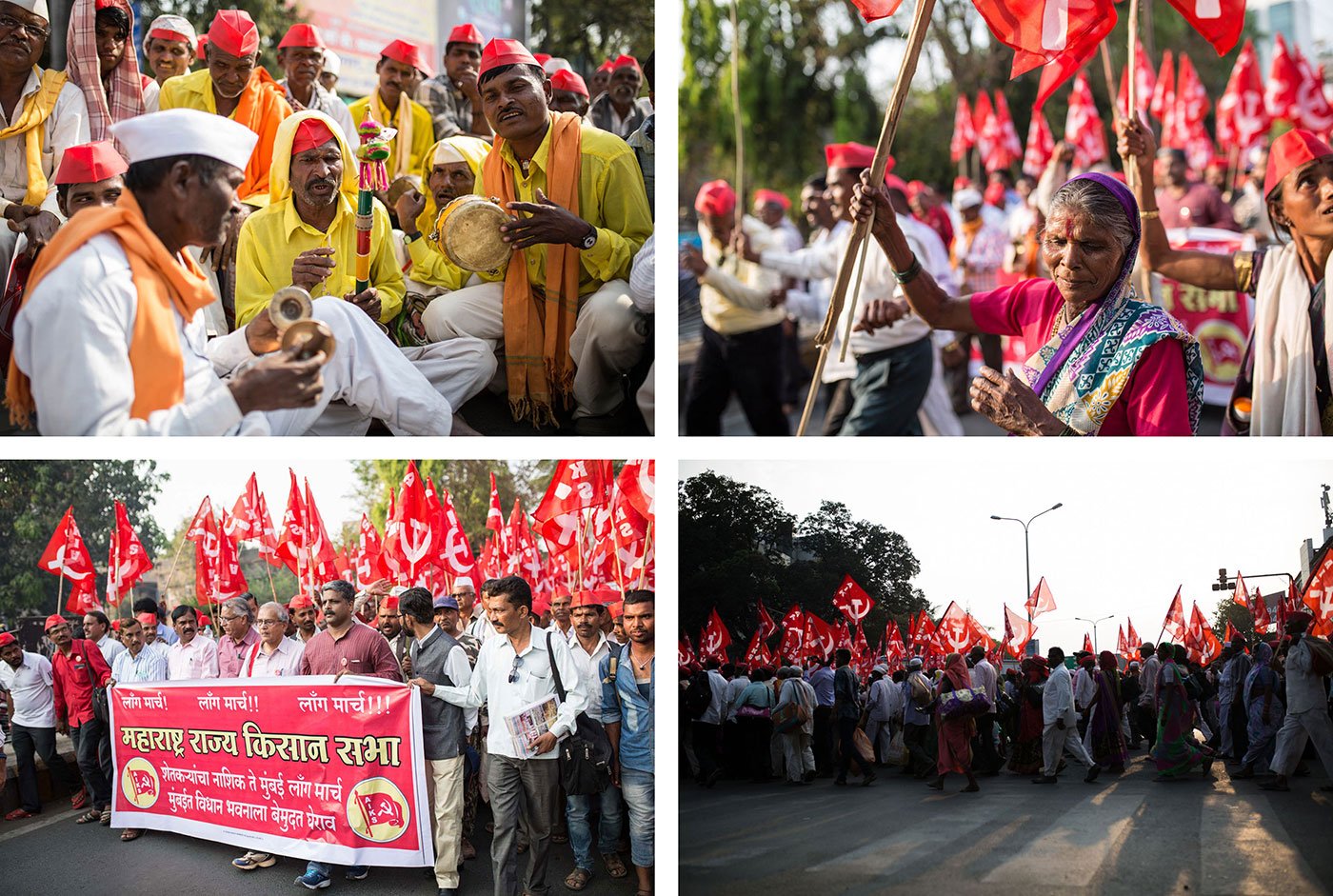 Top left: Farmers from Adivasi communities sing a devotional song. Top right: Rukmabai Bendkule, 60, at the forefront of the march, dances with a red flag in hand. Bottom: Thousands of farmers on the move with flags and banners.

Sanjay Boraste has also come along for the morcha . He is from Dindori village in Dindori taluka , 26 kilometres from Nashik town. He has a debt of more than Rs. 8 lakhs. "When the government first announced the loan waiver, I thought I would be relieved," he says. "But the CM played a cruel joke by imposing the cap of 1.5 lakh rupees." Boraste, 48, harvested pumpkin this month on his 2.5 acres. "I had to sell it off for 2 rupees a kilo," he says. "The rates have collapsed. And pumpkin is perishable."

While reporting from Marathwada for the past year, farmers have repeatedly talked to me about such issues as the enforcement of the Swaminathan Commission’s recommendations of a minimum support price, a blanket loan waiver, and reliable irrigation. For many in the crowd gathered in Nashik, these demands are important too, but among their main concerns is land rights. As the march progresses, the concerns of the farmers who join in will vary.

By 3 p.m., the organisers start addressing the crowds, and by 4 p.m. thousands of people start walking briskly through the streets towards the Nashik-Agra highway. At the forefront is 60-year old Rukmabai Bendkule – dancing robustly with a red flag in hand. Rukmabai is a farm labourer from Dondegaon village in Dindori taluka. She earns Rs. 200 a day working three days a week – six days on the road is a loss of at least a valuable Rs. 600 for her. “Even though I do not cultivate any crops, if the farmers in my village lose their land [to the forest department], I lose work,” she says. But will the government budge, I ask her. “Do they have an option?” she smiles. 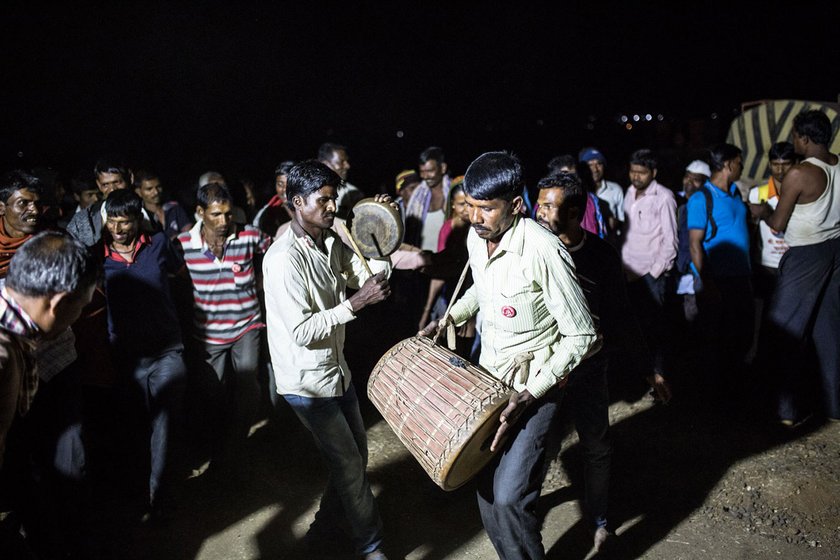 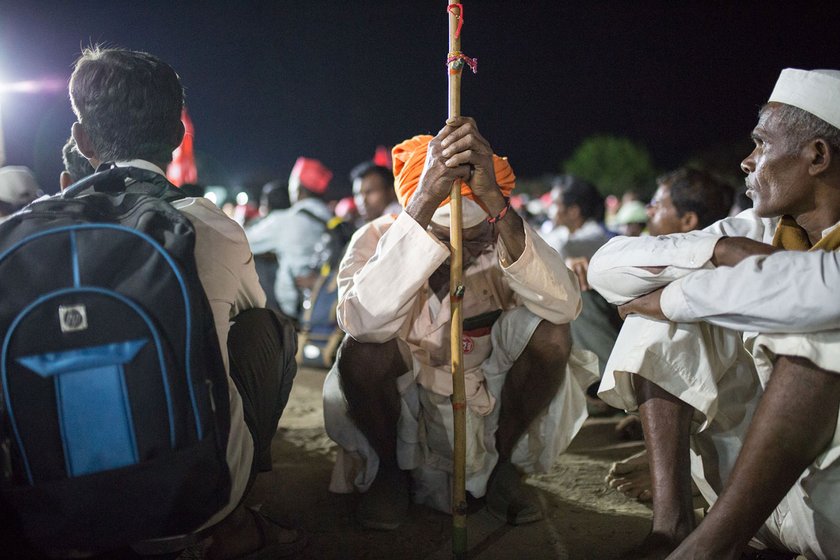 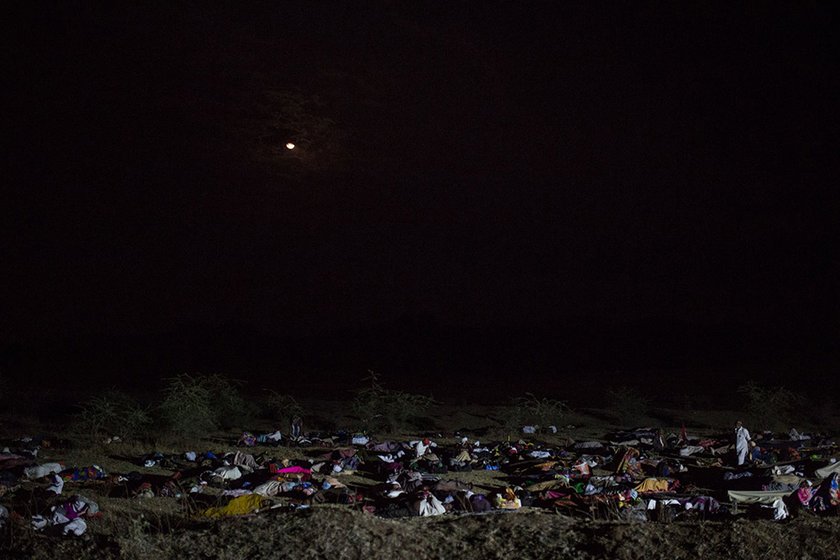 L to R: After a long day of walking, some farmers sing and dance at night; others like Waghere are exhausted; soon, everyone rests for the night under the open sky

Nawale says protests such as this have an impact on the government. “The problems we are talking about have now become talking points,” he says. “Even though with a lot of caveats, the government was forced to deliver a loan waiver. We call it loot wapsi . Our earlier generations have been looted and exploited by the governments over the years. We are merely taking it back step by step.”

On the way, many of the farmers refill their plastic bottles from a water tanker arranged by the organisers. That’s the only break they take till they reach Raigadnagar – five hours later, around 9 p.m. – where they spend the night near the highway, not far from Waldevi dam, on open ground under the sky.

After dinner – also chapatis and a vegetable – which too they have carried in their bags,  some of the farmers start playing music on speakers on a truck accompanying the morcha . Folk songs reverberate through the dark night and, hands behind each other’s back, several men form a semi-circle and dance to the music.

Waghere, wrapped in a blanket, is amused at their energy. “I am exhausted,” he says. “My legs are aching.” Will you be able to continue for the next six days, I ask him. “Of course,” he says, “And now I will sleep.”