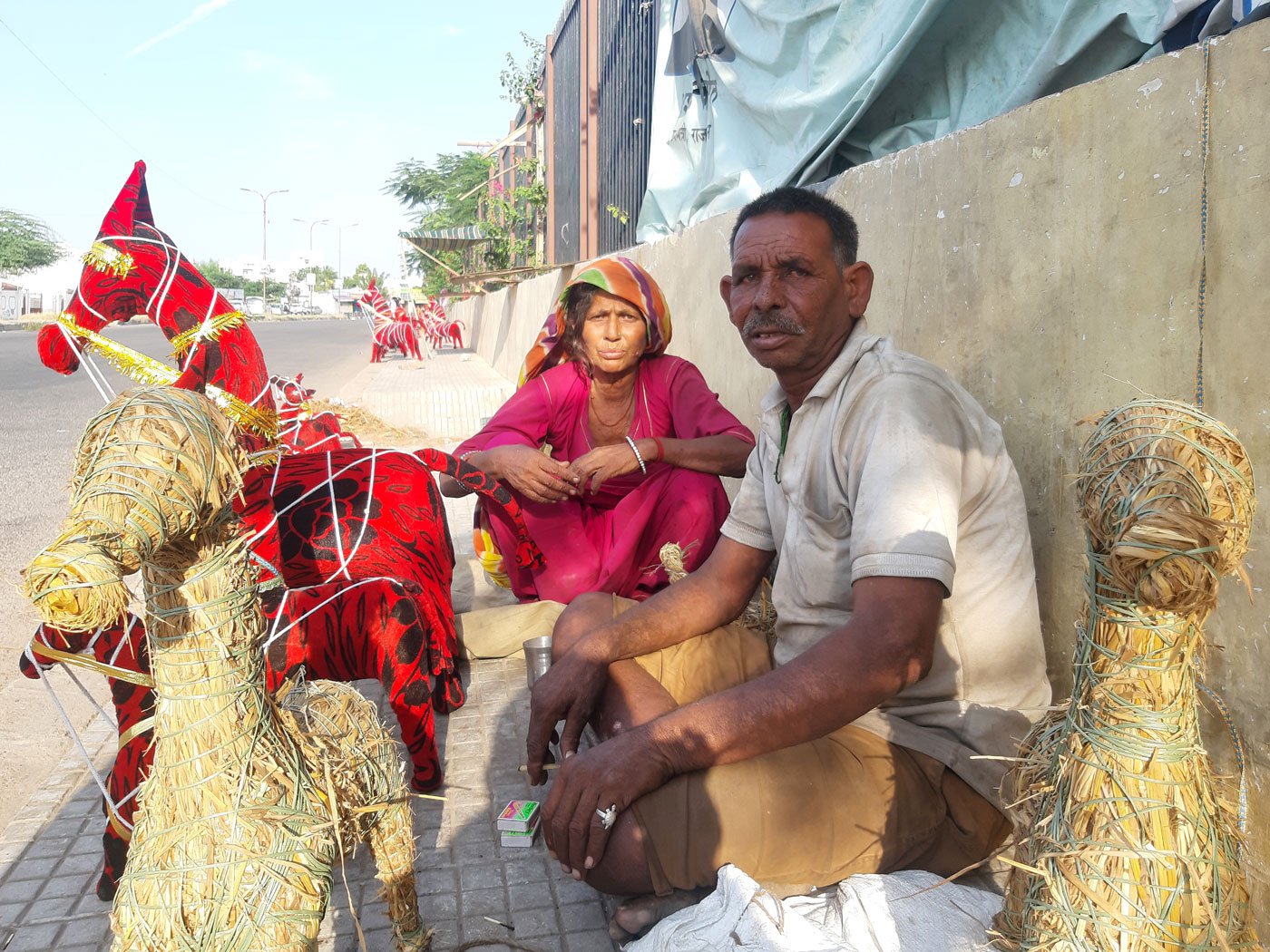 Juararam Bhat and others, living on a Jaipur pavement, once makers of wooden puppets, switched to straw-stuffed items to earn an income, but that too has been hit by a fall in tourism, rising costs and poor sales

Using a half-made horse as a pillow, Juararam Bhat was sleeping by the roadside when a car stopped by. That woke him up. The 60-year-old craftsman rushed to the person sitting in the car, and sat on the toy horse to demonstrate its sturdiness. Surely this was a bargain at 300 rupees? The customer beat him down to 200. And so Juararam made his first – and perhaps last – sale of the day, at 4 p.m.

Close to where he was resting is Juararam’s shanty of bamboo poles covered with tarpaulin and plastic sheets. He lives here with his wife Buglibai, and their two sons, their wives, and children. Their hut is amid a cluster of 40-50 similar dwellings near the bridge over the Amanishah stream in the Ambabari dargah area of west Jaipur. The families living here, from the Bhat community (listed as an OBC in Rajasthan), all make decorative items with dry grass (or straw) – elephants, horses, camels and more.

“I don't remember the year, but it was my father who came to Jaipur from Didwana town in Nagaur district,” says Juararam. In the toy-making process, his main task is to make the straw skeleton. While doign this,  he inserts a thin bamboo stick every now and then to support the structure and ties the dry grass with wire and thread to keep it in shape. Then he passes on the completed structure to Buglibai to stitch a red velvet cloth around it before decorating it with gold-coloured lace. It takes them 2 to 3 hours to make one such item.

The hut where they are sitting to make these artefacts is their home and workplace, as well as ‘warehouse’. They have moved this makeshift house more than four times, in each instance after the police and the Jaipur city authorities demolished their settlements, which they deem illegal. At the present location, for water they depend on tankers and nearby shops, use public toilets or spaces near the Amanishah stream, and for electricity most of the families use LED lights charged by batteries.

Juararam’s family, like all others in this cluster near the bridge, has never owned any farmland – most of them are from villages in Jodhpur and Nagaur districts of Rajasthan. Their traditional occupation, he says, was making wooden puppets and putting up performances, but now they are mainly engaged in making the decorative items of dry grass and velvet. 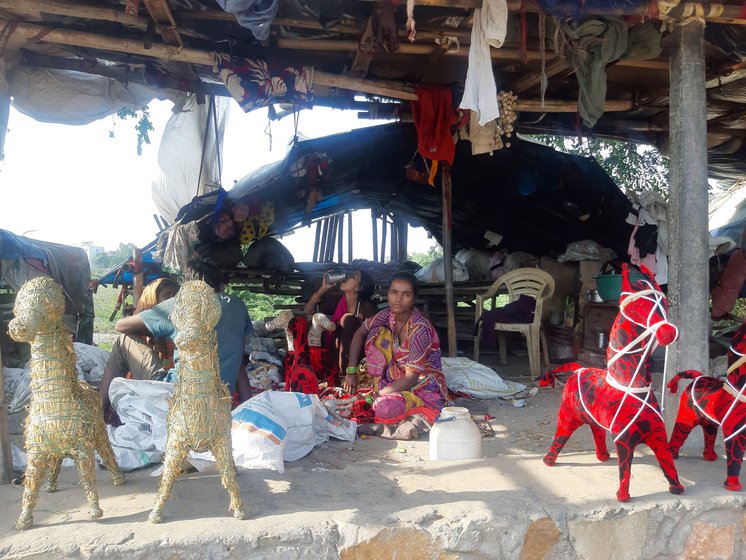 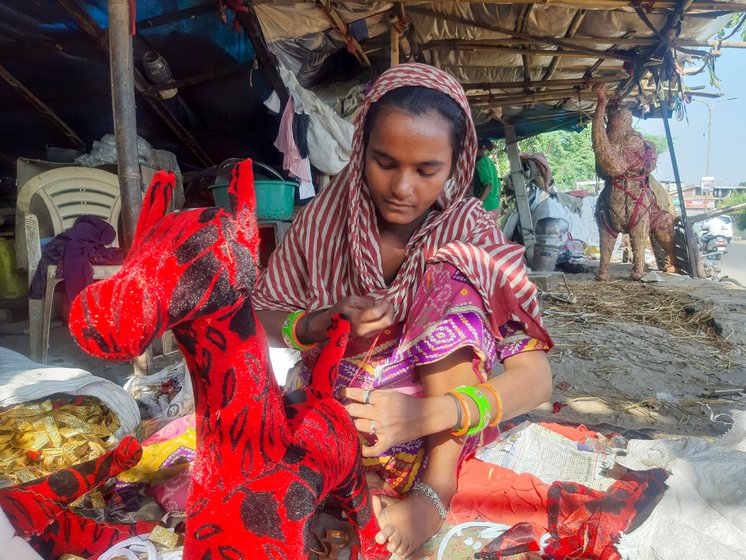 Pooja Bhat has been making dry grass elephants, horses and camels since childhood. 'The lockdown forced us to even beg', she says

“Now, people have TVs and mobile phones for their entertainment, they do not need our puppet shows anymore,” says Juararam, who learnt to make wooden puppets in childhood from his father and grandfather. Usually, a team of three would perform a show that earned them “10-20 rupees and sometimes a little flour.” But over the last two decades, the interest among local audiences for these performances has waned.

For long, their audience then remained mainly foreign tourists in upscale hotels in and around Jaipur. For them, a three-men troupe would perform an hour-long show – one handling the puppets, the others playing a harmonium and a dholak . These performances usually depict folk songs and tales. Among the most popular stories, says a community veteran, 73-year-old Premram Bhat of Jodhpur, is that of Amar Singh Rathore of the royal house of Marwar during the 17th century reign of Emperor Shahjahan – and the Rajput’s fraternal fights for the throne of Nagaur, counter-plots, executions and more.

These shows would fetch each of them Rs. 300 to Rs. 500 some 3-4 times a month. But with the lockdown and the drying up of tourism, this came to a close. “Whatever little work the hotels and the tourists had been providing us so far, stopped when, due to corona, the hotels closed,” Juararam says. "There are no tourists. So we only have these dry grass toys for our livelihood.”

While the Bhat community had for long made wooden puppets and performed shows, says Premram, the straw-velvet items are more recent. People in the community started making the mini horses around the 1960s, he recalls, when the demand for these handmade animals began growing in other countries, especially in western Europe. Besides, wooden items are expensive to make and take more time, so the Bhat community now makes those only on an occasional special order. 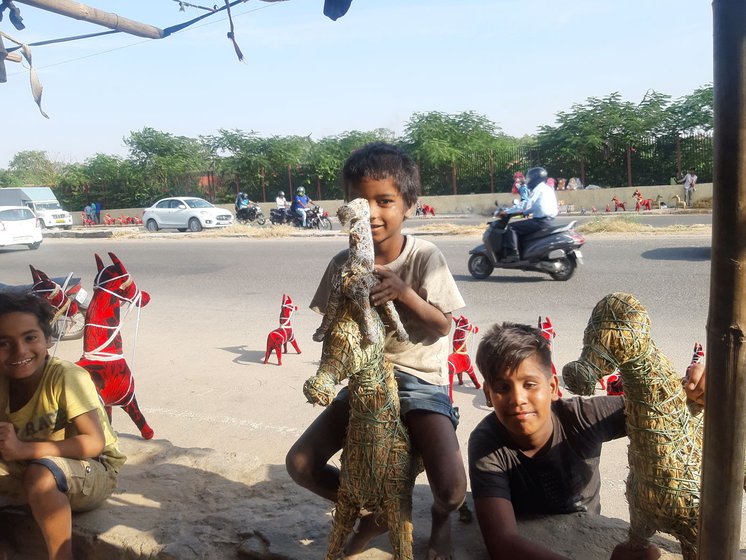 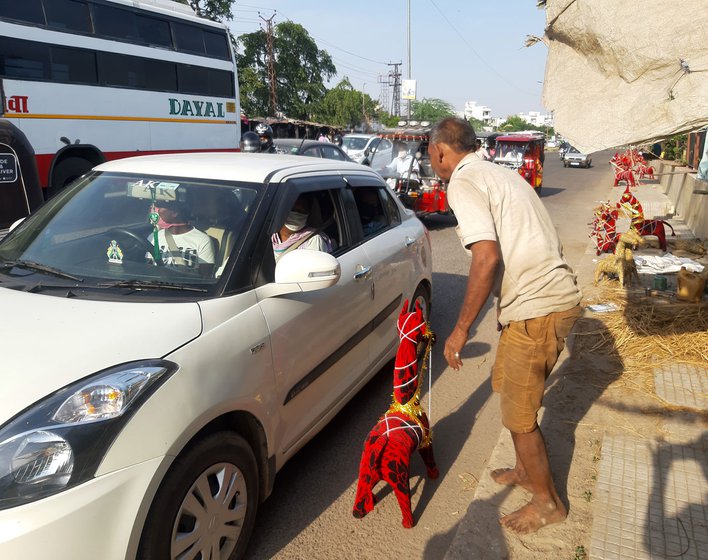 'Now, people have TVs and mobile phones for their entertainment, they do not need our puppet shows anymore', says Juararam Bhat (right)

“The straw horses covered with cloth are also a popular offering at Ramdeora temples across Rajasthan,” says Premram Bhat. The legend, as he recalls, says that this folk deity had infused a wooden horse with life in the 17th century to use it as his ride. And that is why the handmade horses are still used as offerings at an eight-day long annual fair held around August-September in Ramdeora town in Jaisalmer district.

“I learnt how to make these by watching my parents and other family members. I have been making horses, elephants and camels with dry grass since when I was small,” says 18-year-old Pooja Bhat, sitting on the pavement opposite Juararam’s hut. Wearing a traditional Rajasthani lahenga , she is stitching the red velvet onto the straw structures.

The pandemic has affected her income too. “Before, we could arrange for two meals a day by selling these toys,” says Pooja, “but the lockdown forced us to even beg.” Instead of sometimes even selling up to 10 toys a day, on a good day now she can barely sell 1 or 2. “Earlier, we would get 400 to 500 rupees at the end of the day [profit after costs], but now we barely get 100-150 rupees. Customers now don’t want to buy handmade toys. And if they do, they haggle so much. We are forced to sell at a price that hardly covers our expenses.”

Her family, as well as the others living near the bridge, don’t have any identity cards or documents, and don’t receive any support from the government. “Whenever we go to get any card made, the officials shoo us away,” says Pooja’s 25-year-old sister Manju. “We have tried to get a voter ID made many times. No government schemes include us. It is because of some donors, who came here to distribute food in the lockdown, that we survived. We have eaten rancid puris , three days old, during that time.”

For Raju Bhat too, who lives and works next to Pooja’s hut, it’s been a struggle since March 2020. With the lockdown, say 38-year-old Raju, who has been making the straw items since he was five, the customers nearly vanished while the prices of the materials required to make the mini animals went up. 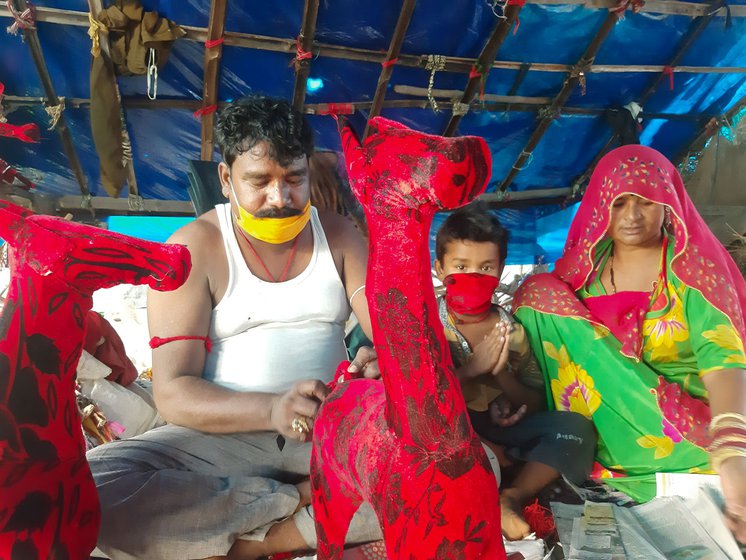 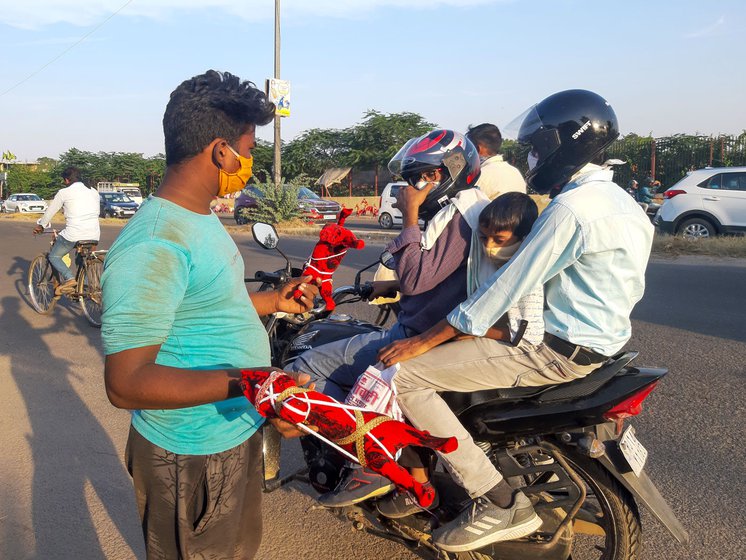 'No one in our community wants their children to continue doing this work', says Raju Bhat, with his wife Sanju and sons Rohit (left), and Deepak (right)

“Earlier we got the dry grass used for packing vegetables and fruits from the Chandpole mandi or Muhana mandi [between 8 and 11 kilometres away from their huts] for 100-150 rupees a quintal. We could make around 50 toys out of that,” says Raju. “But now we pay Rs. 1,500 per quintal. Then there are the costs of velvet at 70 rupees a metre, decorative glitters at 500 rupees per kilo, and threads at 200 rupees a kilo. These small pieces of bamboo and wire to shape and tie the toys also have to be purchased.”

Before the changes set in motion by the lockdown in March 2020, making an 18-inch high straw-velvet item would cost Raju around Rs. 65-60, but now it costs Rs. 90 or more. “We sell these pieces for Rs. 100-120 [sometimes Rs. 200] depending on the size of the item,” he says. His family makes about four such animals a day, but manages to sell only 2 or 3 if they are lucky. “People still bargain with us for a 150 rupee horse,” he adds, “but in a mall they willingly buy a toy car for 500 rupees without any kind of haggling.”

Their income from selling these items has to take care of the family of six – Raju, his wife Sanju, 32, and their four children – Deepak, 17, Anil, 15, Guddi, 12, and Rohit, 10. None of the children now go to school. Deepak and Anil dropped out two years ago to help the family in making the straw artefacts, while Guddi and Rohit, studying in a government school nearby, are unable to attend online classes without a smartphone.

“I will send Guddi and Rohit back to study when the government announces the opening of schools,” Raju says. “No one in our community wants their children to continue doing this work. But because our financial situation is weak, we are compelled to involve them. I have the same dreams for my children as any parent. I want them to find jobs. I don’t want them to make these grass toys all their lives. I don’t want that anyone can come anytime and break and devastate their houses too.”

And Raju foresees that just as his community slowly lost its work of making wooden puppets, one day their work of making dry grass items will also come to a standstill. “This work will last only until my generation,” he says.

Translated from Hindi to English by Chilka.