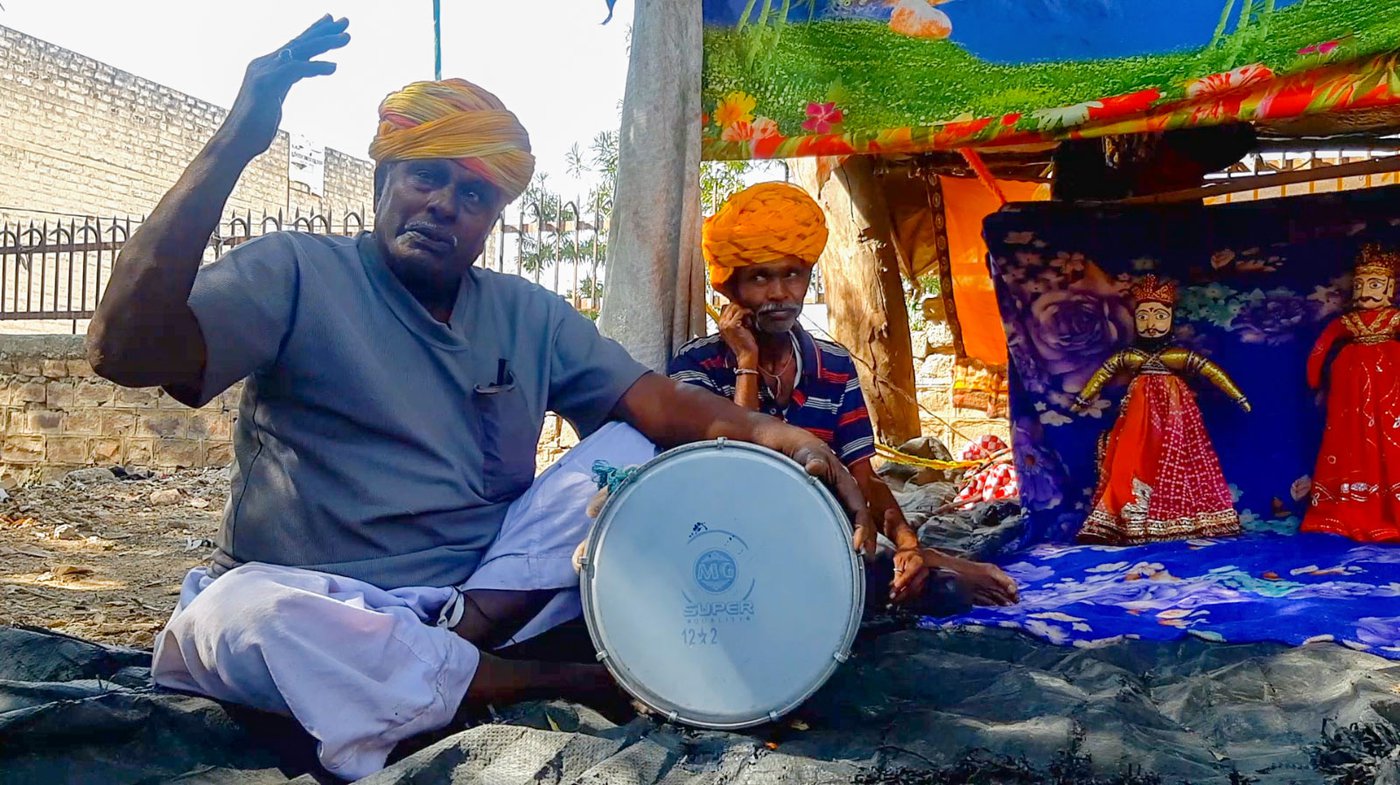 In this video story, Premram Bhat and others speak of how their puppet shows, once popular in royal courts and at village events, are no longer in demand, and how the lockdowns have further hit their incomes

“My father tied the strings to my fingers and taught me how to dance the puppets,” says 74-year-old Premram Bhat, recalling a time around six decades ago.

“He used to take me with him from the time I was about nine years old to the various villages he visited to perform puppet shows,” he adds. “I used to play the dhol . Slowly, I got interested in puppetry. My father Lalooram Bhat taught me how to move them, and I too started handling the puppets."

Premram lives in a jhuggi on a footpath in west Jodhpur’s Pratap Nagar area. His wife Jugnibai, 70, their son Suresh, daughter-in-law Sunita and their four children, ages ranging from 3 to 12, all live together. The family belongs to the Bhat community (listed as an OBC in Rajasthan). Community elders say many Bhat families migrated from the state’s Nagaur district about 100 years ago and settled in various cities of Rajasthan like Jodhpur, Jaipur, Jaisalmer and Bikaner.

"I have not had any training in making puppets or in puppetry. I learnt this art only by watching my father perform,” says 39-year-old Suresh. He too used to accompany Premram to the villages, and began assisting in the shows when he was around 10 years old. At home he would help make the puppets. “And by the time I was 15 years old I had learnt to dance the puppets well. I would go by myself to the villages and do the shows,” he adds.

Watch video: ‘There is no one to listen to us or watch our shows’

His son Mohit, 12 years old, now accompanies him. “Anytime we get any work, Mohit is with me playing the dhol ,” Suresh says. “He studies in Class 5, but the schools are closed [due to the pandemic-lockdowns].”

And getting that work is rare now. For long, the puppeteers’ audience was mainly foreign tourists in Rajasthan’s hotels. For them, a three-men troupe would perform an hour-long show – one handling the puppets, the others playing a harmonium and a dholak . These performances usually depict folk songs and narrations of royal intrigues and clashes (watch the accompanying video).

These shows would fetch each performer Rs. 300 to Rs. 500 around 3-4 times a month. With these invitations coming to a halt during the lockdowns, the puppeteers have relied on occasional streetside performances, earning barely Rs. 100-150 per show. And some of their income comes from making and selling straw-velvet items. (See Jaipur toy makers: stuck under a grass ceiling )

The community had to depend on charitable organisations for rations and other essentials during the lockdowns, though work is now slowly trickling back in with the easing of restrictions across the state. 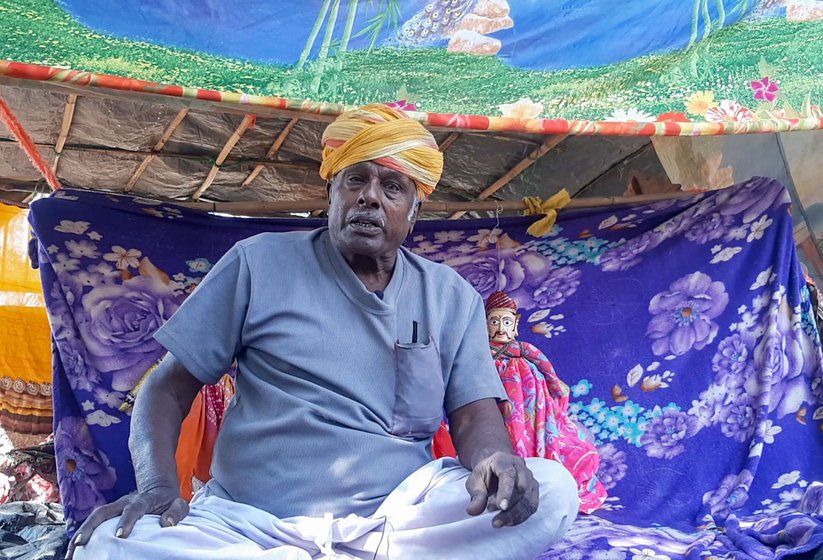 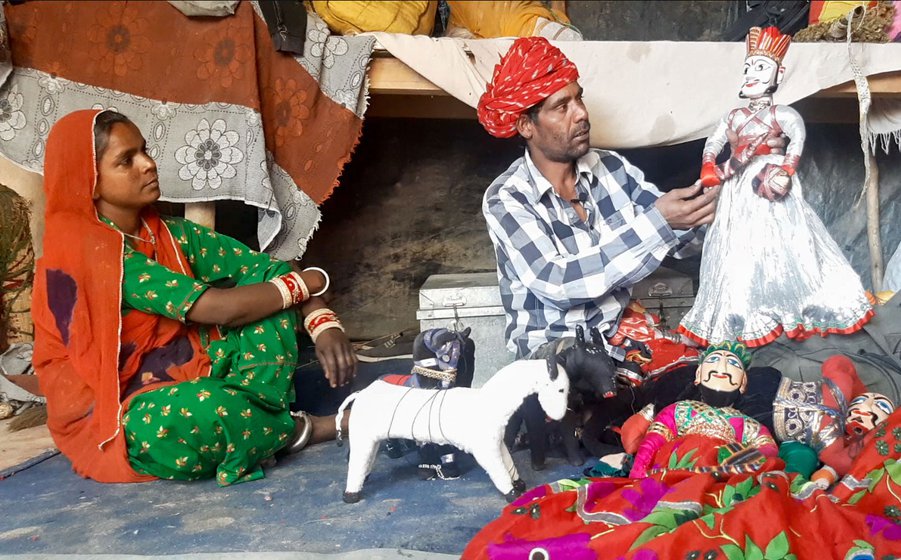 Left: 'No one respects our art like before', says Premram Bhat. In the cover image on top, he is performing with dholak -player Mohanlal Bhat. Right: Manju and Banwarilal Bhat: 'We have the real stories'

In a hut across the footpath in Jodhpur's Pratap Nagar lives 38-year-old Manju Bhat, who stitches clothes and makes jewellery for the puppets that her husband, 41-year-old Banwari Lal Bhat, performs with.

“This art is dying,” she says. “Earlier we used to get 3-4 shows in a month but since corona we are mostly without work. Only the government can save this art now. We cannot. Now there are newer means of entertainment and there is no one to listen to us or watch our shows.”

Besides, she says, their traditional tales are being tampered with. “We have the real stories. These educated people come to us and listen to our stories and then they add or subtract what they like and make a television serial, a drama, a movie. These contain more lies and less truth.”

Premram too says that new technologies like television and mobile phones have reduced the stature accorded in the past to artistes like him. “Our ancestors used to entertain in the courts of kings and emperors. In return they would get foodgrains, money and various items that were enough to last a year. My father and grandfather used to go from village to village to entertain people. The villagers still respect us, but the world has changed. No one respects our art like before. It is a dying art and I don’t enjoy puppetry anymore.”