In UP: ‘Half Karnataka and half Andhra’

Birendra Singh and Ramdekali, who ran a paani-puri stall in AP, returned home to UP during the lockdown. They are now in debt, anxious about their kids' education, and unsure about how to proceed

“After my studies are over, I want to be an officer – a home guard,” said 14-year-old Sandhya Singh. Her 16-year-old brother, Shivam, is hoping to find a job in the Army, and has been ‘training’ for it since he was her age. “I wake up at 4 in the morning and do my exercises every day,” he said, “YouTube tells me whatever I ask about army training – how to hang [from the bars], do push-ups, those kind of things – and I do it.”

They were speaking to me on the phone from the roof of their house in Binaura village in Jalaun district of Uttar Pradesh. The siblings came back here on May 21 from Kalikiri village in Andhra Pradesh, where their parents worked. “When we reached home, there was nothing here, and we too were carrying nothing,” says their mother, 32-year-old Ramdekali. “We slept on an empty stomach that night…”

On July 8, Ramdekali proudly informed me that Shivam had passed his Class 10 board exams with 71 per cent. Her tone changed when I asked about the admission procedure for his Class 11 and 12. “Our children are worried about how they will attend online school. If we go back [to Andhra Pradesh], the phone will go with us. How will Shivam study online in UP? And if we stay here, how will we pay for their education?” she asked. The total annual fee for each of the kids, both studying in private schools, is Rs. 15,000.

Until some months ago, Ramdekali and her husband, 37-year-old Birendra Singh, ran three paani puri carts in Kalikiri village of Andhra’s Chittoor district. Sandhya lived with them, while Shivam was with his maternal grandparents in Bardar village of Jalaun district. The family belongs to the Pal community, listed as a Nomadic Tribe. 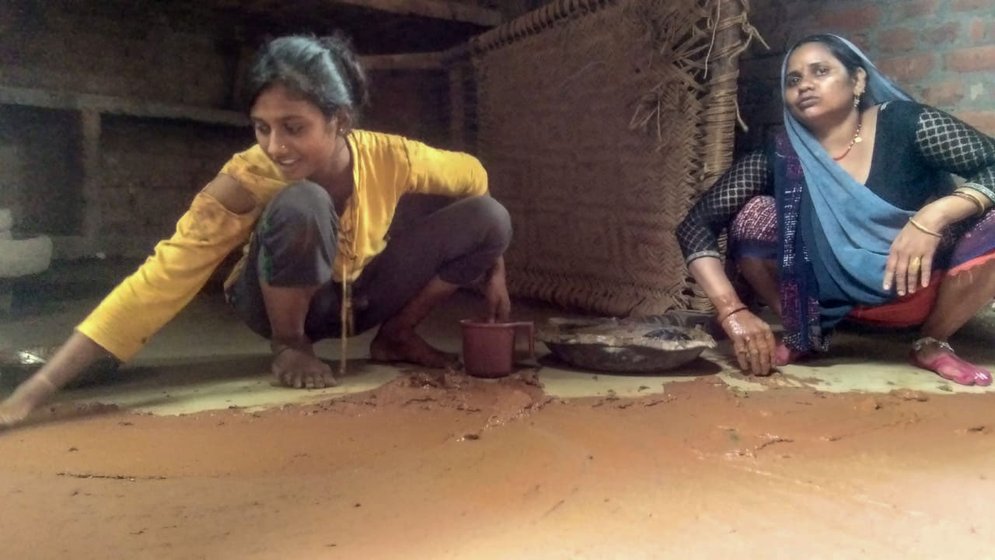 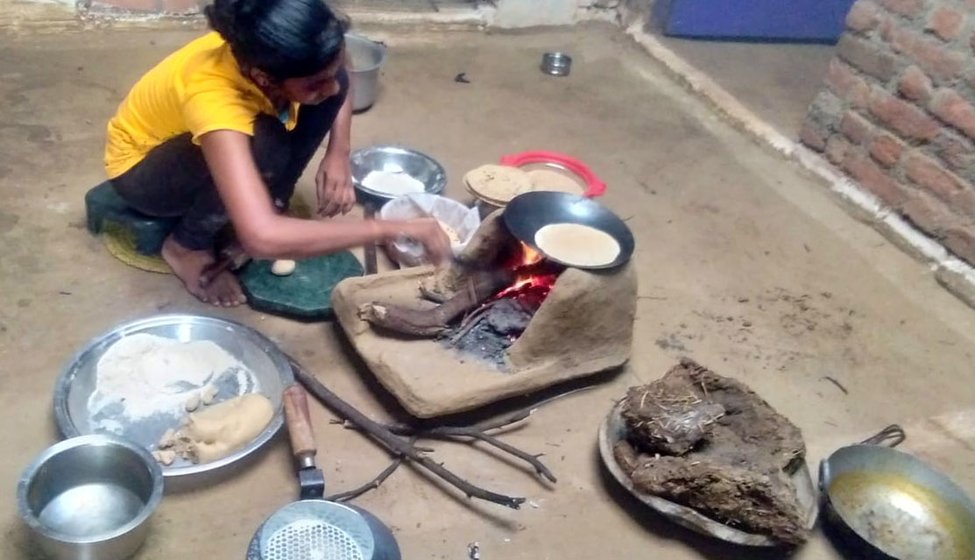 'She is worried about how her studies in Andhra Pradesh will continue, now that we are here [in UP],' Ramdekali said about her daughter Sandhya

While Shivam has a phone too (which he used when staying away from his parents), the family cannot now afford to recharge two phones. “We are finding it difficult to  [pay to] recharge even one phone,” said Ramdekali.

“At least in Andhra Pradesh there was light [electricity],” added Birendra Singh. “Here, we don’t know when it will come. Some days it stays for just enough time to charge the phone. Other days, it doesn’t.”

Birendra’s loss of income began before the lockdown. For two months before March 24 – when the central government announced the nationwide shutdown to stem the spread of Covid-19 – he was back home in Binaura for his mother’s last rites, and to look after his ailing father.

On March 20, Singh had left for Kalikiri village in AP, along with Shivam. Ramdekali and Sandhya were already there. Then the lockdown began.

On April 6, Birendra called a Covid-19 helpline run by several citizen’s groups in AP. By then, the family had moved to the house of Ramdekali’s brother, Upendra Singh, in Kokkanti village of Anantapur district, where Upendra too runs a cart selling chaat items. From the helpline, the combined family of nine received rations of atta , dal , oil and other essential items twice in April.

'If we go back [to Andhra Pradesh], the phone will go with us. How will Shivam study online in UP? And if we stay here, how will we pay for their education?' Ramdekali asked

“Some government officials came and we told them our gas would get over in 1-2 days. They told us to go get wood and adjust. So we are adjusting,” Birendra had told me on the phone on April 13. “We have received no information on how to return home – not from the governments of Andhra Pradesh or Uttar Pradesh and not from Modiji ki sarkar .”

By May 2, the family had filled the form for seats on the government-run Shramik Special trains, and on May 6 they went through the mandatory medical test for the journey. “I went back and told officials a week later that the report should have come by now,” Singh said. Some time later, he asked again; a month went by. Meanwhile, on May 10, the helpline that was supporting their family with rations shut down.

“In the beginning [of the lockdown], when we had food, I received calls from many numbers [NGOs, citizens groups and others] asking if we needed rations. We told the truth and said we were fine. Now no one is calling,” Birendra told me on May 11.

Five days later, the family of nine began walking back home to UP. Among them was Upendra and his wife Rekha Devi’s son Karthik, who is not even three years old.

They walked for roughly 36 hours over three days. “People on motorcycles were giving food,” recalled Birendra. With children in the group, they had to stop many times to rest by the side of the road, and in the shelters of shops. The family had hired a cycle in Kokkanti village for their luggage – mainly clothes. Birendra said that most of their belongings are still in their room in Kalikiri and he’s unsure of what the landlord might do with these since he has not paid rent since March. 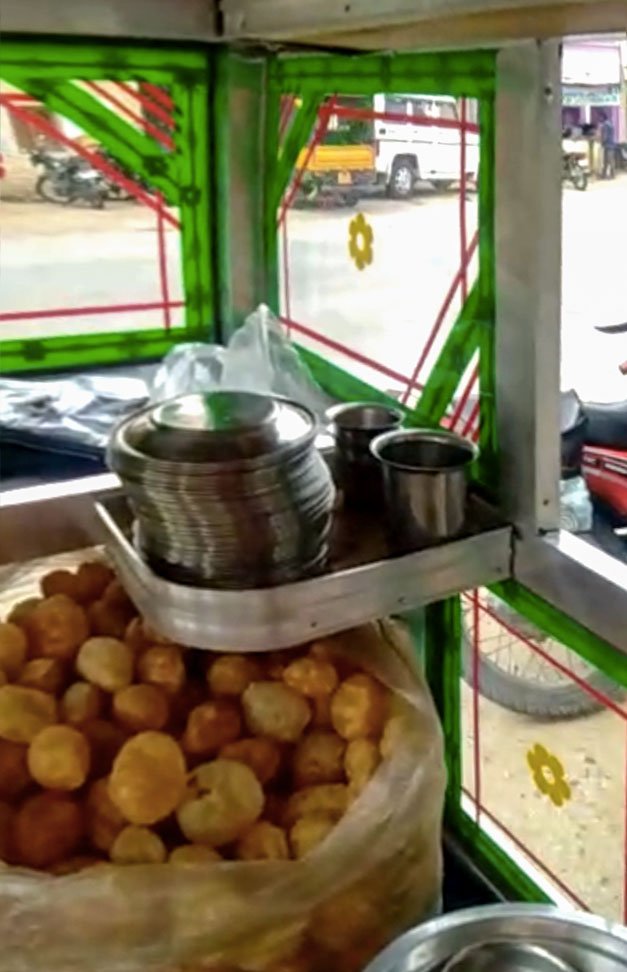 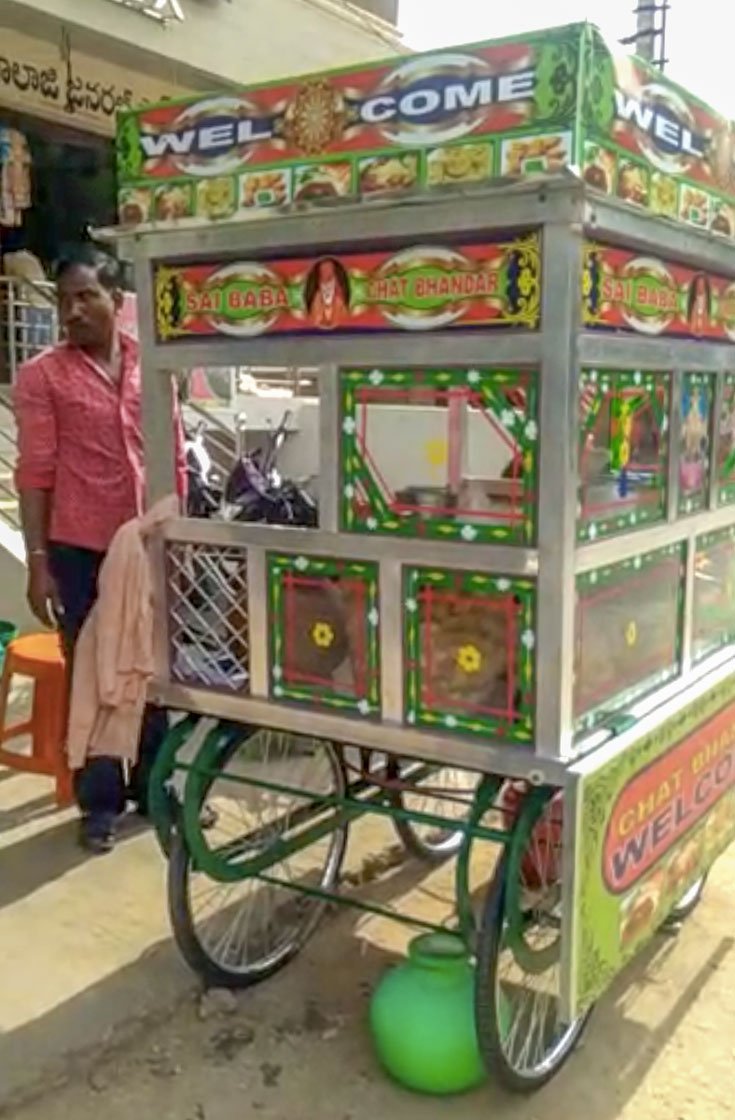 After covering more than 150 kilometres by foot, the family got on a truck going to UP. There were 41 adults in the truck, along with several children. Each person was asked to pay Rs. 2,500 for the journey. Birendra was carrying Rs. 7,000, and had to borrow from people he knew on the journey to pay for four seats. Food and water for the eight-day journey came to Rs. 450-500 per day for Birendra’s family – if the truck driver agreed to stop.

Before the lockdown, Birendra and Ramdekali earned Rs. 20,000 to Rs. 25,000 a month. They operated three paani puri carts, and until late 2019 employed two relatives (both named Rahul Pal) to run two of these gaadis with them. (One Rahul returned home to UP around Diwali, the other had gone back in December).

Every day, Ramdekali and Birendra would begin working at 4 a.m. and they usually slept only around midnight. After paying rent, household and business expenses, school fees and more, they had little left to save. “We didn’t have much money. Putting together more than Rs. 10,000 to reach back home depleted my already low savings,” Singh told me on June 26.

“On the second or third day of the journey back, it started raining so heavily that the truck had to stop. We were drenched. We had to clean the truck and then continue the journey in all that geelapan [damp],” said Sandhya. Many stood for long hours during the journey; she was among those lucky enough to get space to sit. 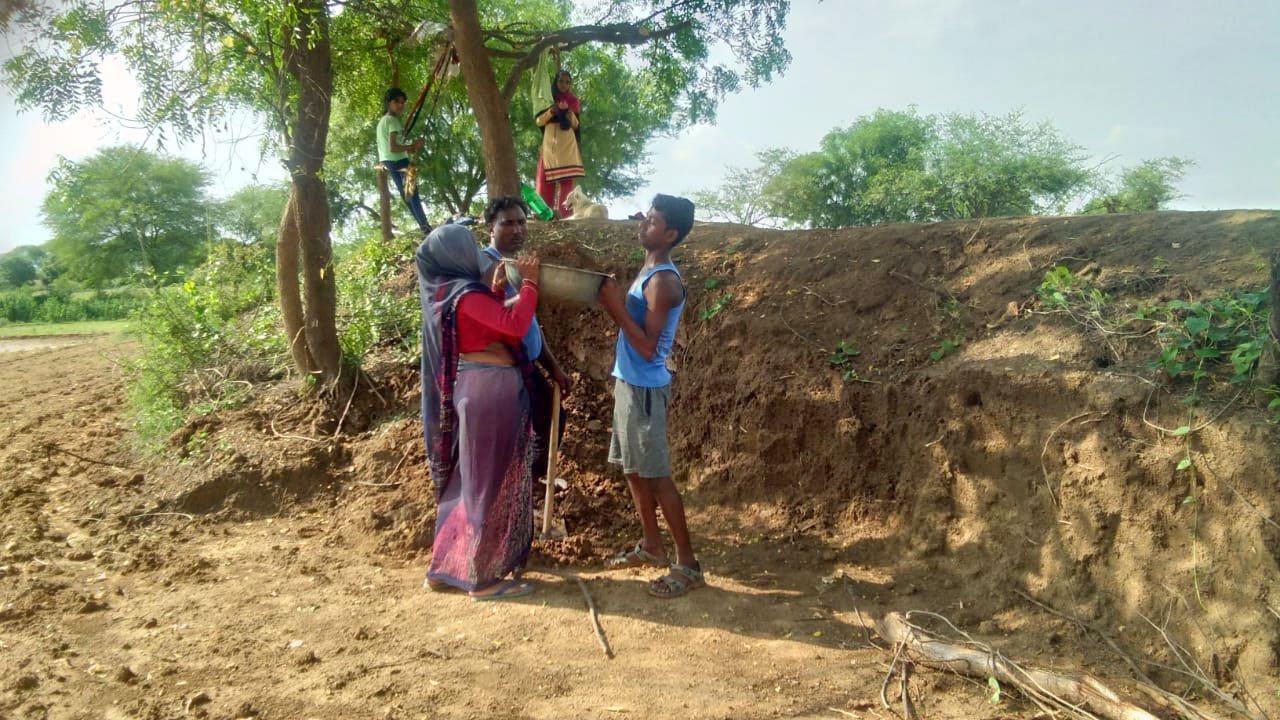 ' It’s very difficult to work outside the house [in UP] because I have to wear a purdah' , Ramdekali said – here, with Shivam (right) and Birendra Singh

A week after reaching home in Binaura village, Sandhya woke up with a fever. “This happens to her when she is in tension. She is worried about how her studies in Andhra Pradesh will continue, now that we are here. My daughter, she is very good at studies, she knows half Karnataka and half Andhra Pradesh,” Ramdekali said about her daughter’s fluency in Kannada and Telugu.

Before moving to Kalikiri village in AP in 2018, the family lived in Gadag city of Karnataka for 10 years. “I used to go from street to street in the evening selling gobi-manchurian [a fried cauliflower dish],” says Birendra. During the day, Ramdekali prepared the ingredients. “Many times, people would eat but not pay. Then they gave gaalis [abuses],” Birendra added. “I could not fight – I was in another’s village. Somehow, we would manage.”

When Singh and I spoke on July 8, it had been more than a month since the family had returned home. “I am ready to go back [to AP],” he told me. “But seeing [Covid-19] patient numbers rise, I do not know if customers will even come [to eat paani puri ].”

Like Birendra, up to 99 percent of self-employed persons (including street vendors), notes the Stranded Workers Action Network, have had almost no earnings during the lockdown period. (The network was formed on 27 March to address distress calls from migrant workers, and has released three reports documenting roughly 1,750   calls.)

Meanwhile, Birendra has been doing odd jobs, fixing people’s kutcha houses in and around Binaura. For this, he earns Rs. 200 a day, and gets 2-3 days of work some weeks, sometimes not even that. Ramdekali has been doing housework – cooking, washing clothes, cleaning. “It’s very difficult to work outside the house because I have to wear a purdah . This makes it hard for me to even work on the farm. But whenever I can, I go,” she told me on July 30. 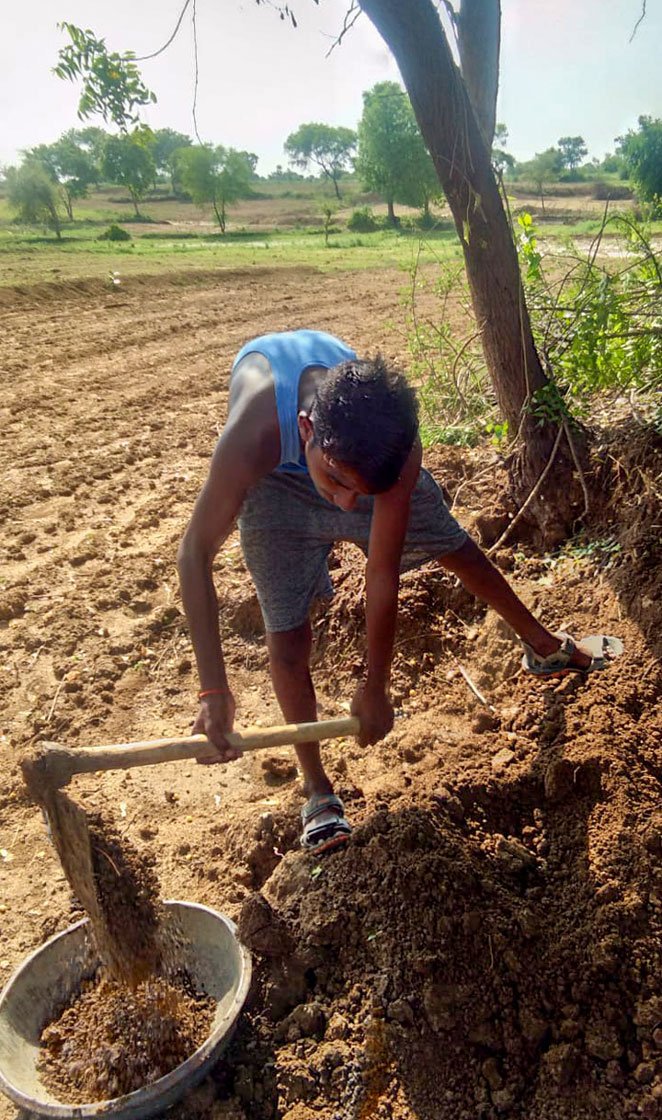 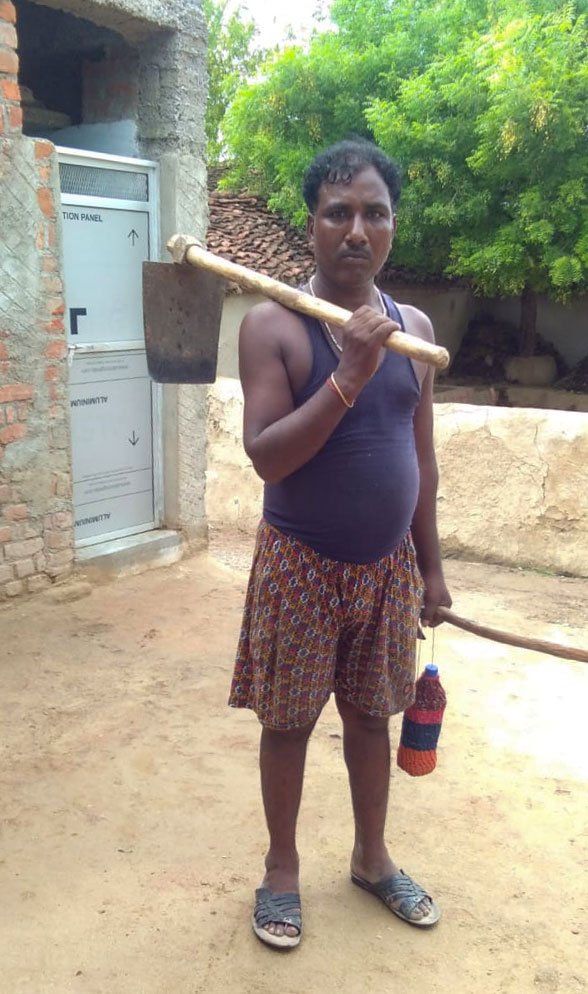 Shivam (left) and Birendra: On the family 2.5 acres of land in Binaura village, they are cultivating til , bhindi and urad dal

“We are rotting, sitting here doing nothing. And loans are piling up…” she said. “We have had to ask even for the phone’s recharge.” They owe family and friends more than Rs. 30,000, Birendra estimated, just for expenses incurred during the lockdown. On July 30, when their gas cylinder got over, said Ramdekali, “I had to go to someone else’s house to make food. We earn only for the stomach now, it was not like this before.”

The family owns around 2.5 acres of land in Binaura village. More than two months after waiting for rainfall, it rained well on July 29, allowing them to sow til [sesame]. Birendra is also cultivating bhindi and urad dal . His uncle looked after the land when he was in AP, and last year they cultivated wheat, mustard and peas. Some of their produce is sold, the rest is kept for the family.

A week after reaching Binaura, Birendra tried to register for the Pradhan Mantri Kisan Samman Nidhi Scheme. This brings Rs. 6,000 per year from the central government directly into the bank accounts of eligible small and marginal farmers. But he had missed the cut-off date. He did, however, manage to register for a ration card.

When we last spoke on July 30, Birendra was unsure about the returns from farming this year: “If the rains come again, the crop will grow. But when it will rain, and if it will grow, I don’t know.”

He was waiting to re-start his paani puri business, and said, “Whoever needs water must go find it. Water does not come to you.”

The reporter was a volunteer at the Andhra Pradesh Covid Lockdown Relief and Action Collective in April and May, 2020, which ran the helpline mentioned in the story .