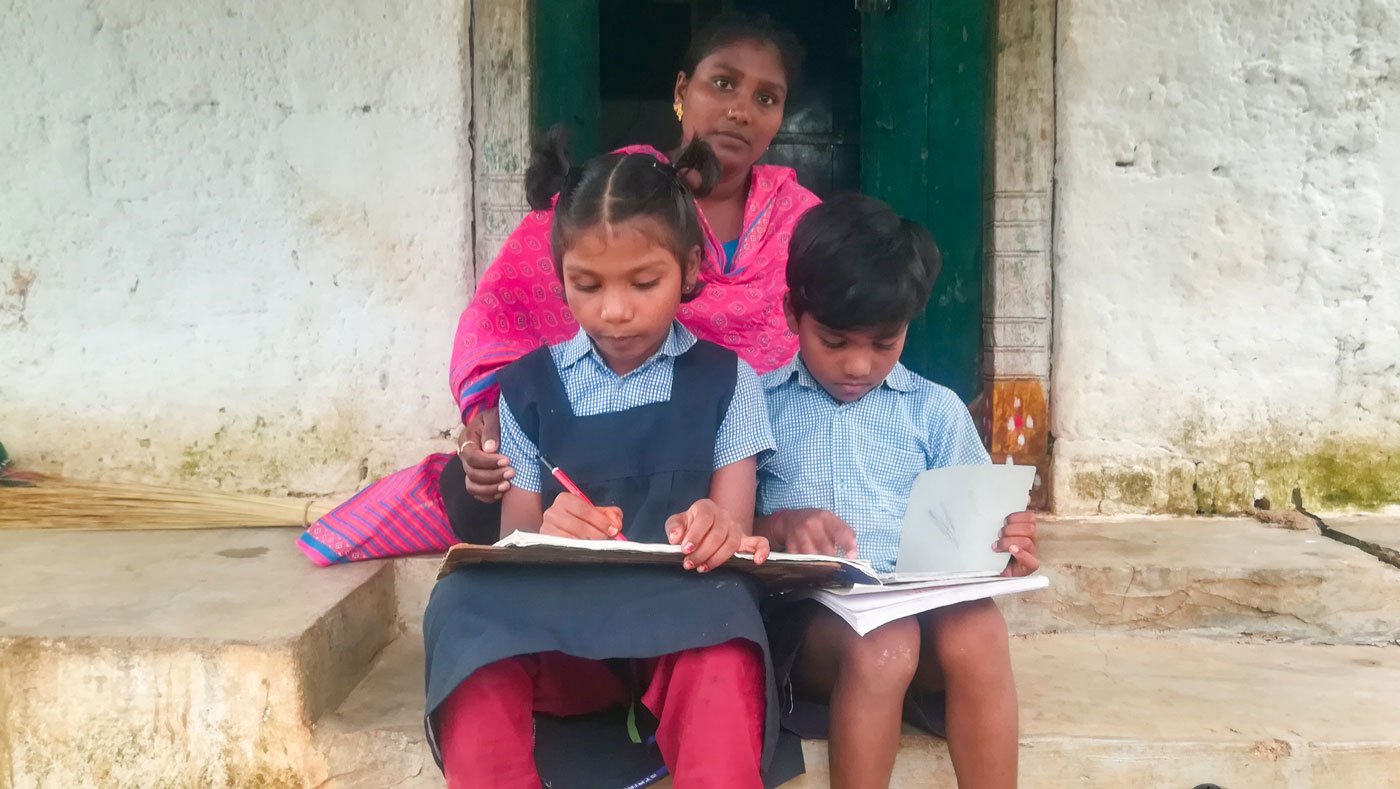 Telangana farm widow: 'No one to depend on'

Kondra Sagarika's husband died by suicide in 2017, leaving her with two little kids and lakhs in farm debt. Since then, despite health issues, and without much state or family support, she works hard as a labourer

The FIR (first information report) was filed on September 17, 2017, at the Tharigopulla police station, three kilometres from Narasapur, the village where Sammaiah and his wife Kondra Sagarika cultivated Bt-cotton on six acres of rain-fed land.

Their debt had reached nearly Rs. 5 lakhs, taken mainly from relatives at varying rates of interest. Sammaiah and Sagarika owned a little over an acre and had leased the rest from relatives. “The process of borrowing the farmer gets into before each season was the reason for the debt,” says Sagarika. Drought added to their losses.

Before they tried farming their own land, the couple worked as agricultural labourers on cotton fields. After they had got married in 2011, they lived in Hyderabad for a while, where Sammaiah worked as a driver. They returned to Narasapu, in Telengana's Jangaon district sometime in 2013 after Sammaiah’s father’s health began failing.

Sammaiah was 29 years old at the time of the suicide in September 2017. Sagarika was just 23. Their children, Snehitta and Satvik, were 5 and 3. “The children remember moments they spent with my husband almost every day,” she says. “It was very difficult the first year after my husband passed away. My relatives did not call me to gatherings. Now they have seen my struggle and have started calling me…” 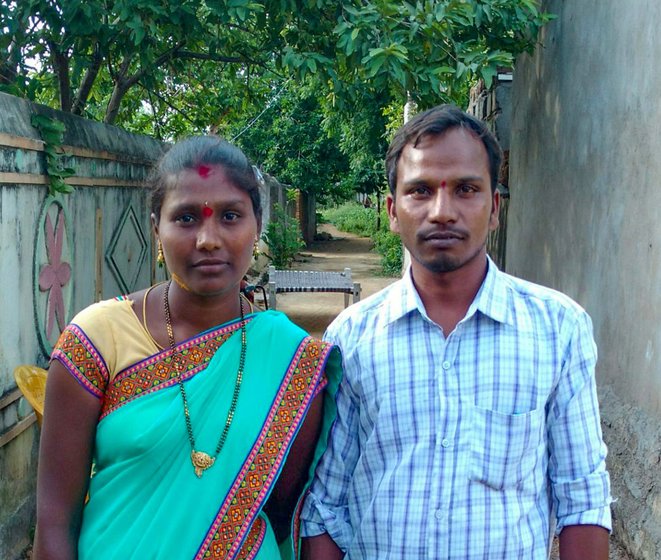 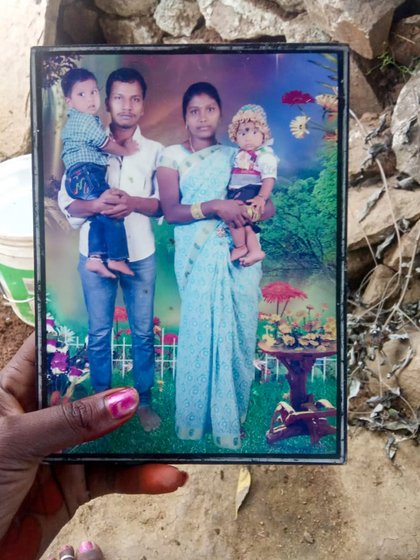 Kondra Sammaiah was 29 years old in September 2017, Sagarika was 23. Their children, Snehitta and Satvik, were 5 and 3

In February 2018, some months after her husband’s passing, Sagarika managed to sell cotton harvested from their land, around 7 quintals, to a local buyer. She made roughly Rs. 12,000 after expenses, and used that money for immediate expenses. For the next sowing season of in 2018, she again tried to cultivate cotton, but after that stopped due to poor returns. That land is now lying empty, she says, and will require a lot of levelling and other work before it can be cultivated on. The tenancy on the leased land was not renewed.

A few weeks after her husband’s death, she went to the Mandal Revenue Office (MRO) in Tharigopulla to apply for a transfer of the land title in her name. Her mother-in-law and brother-in-law contested that resolutely. But in July 2020, Sagarika managed to get the title to one acre (with her son as nominee).

She continues to live with her children in the house that belongs to her husband’s family. She is not asked to pay rent but manages all the monthly expenses from her own income. Her father-in-law, Kondra Yellaiah, passed away in 2014 and her mother-in-law, Kondra Anjamma, found a job as a live-in domestic worker in Hyderabad. 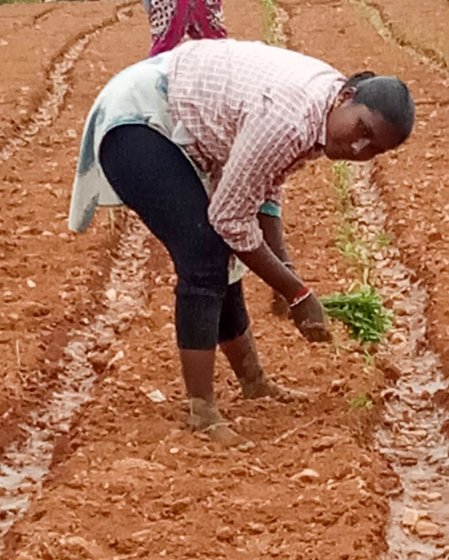 Sagarika works as an agricultural labourer, and at MGNREGA sites when work is available

Her uncles, as she refers to them (her father-in-law’s brothers), live in another village and they recently started farming on the five acres they had leased out to Sagarika and Sammaiah in Narasapur. In October this year, they asked her to leave the house she is living in. “Now that they have started farming here [in Narasapur], they need a place to stay when they come,” she says. “They asked me to vacate by Diwali, but I could not find any place. It’s difficult to find places to rent in villages. I don’t know what to do.”

Since Sammaiah’s suicide, Sagarika has been trying to manage all expenses from her income as a worker on MGNREGA sites when work is available, and as an agricultural labourer. “When my husband was alive, I was working then too, but I knew I did not have to go outside and raise the children all on my own,” she says, “Now I know there is no one I can depend on. That realisation has been difficult,” says Sagarika who belongs to a Dalit community, the Mala caste, as did Sammaiah.

Last year, she stopped working on the fields after March due to ill-health, but did some MGNREGA work in April and May. This year, in January and February she worked in the fields again, and after the lockdown in March, she got around 30 days of MGNREGA work in April and May, but receive only Rs 1,500 as wages. It’s only since August this year that she is working more regularly.

“Health is not good, that’s why,” she says. “My work demands I bend throughout the day. The doctors advised against it. So I stopped.” In February last year, Sagarika was diagnosed with a blood clot near the suture made during Satvik’s C-section delivery in April 2014 at a nursing home in Warangal city.

Over the past six months, Sagarika has suffered from recurring fevers and fatigue, along with the pain caused by the blood clot, which forces her to stay in bed many days. She doesn’t know why and has not been able to get it diagnosed by the doctor she visits in Jangaon town, around 25 kilometres from Narasapur.

Still, she has to continue doing all the housework, and wakes up at 5 a.m. to start the tasks. Then she wakes up Snehitta and gets both of them ready for work, while Satvik is sent for the day to Sagarika’s parents’ house in the village. They reach work by 9 a.m. and return home by 6 p.m. 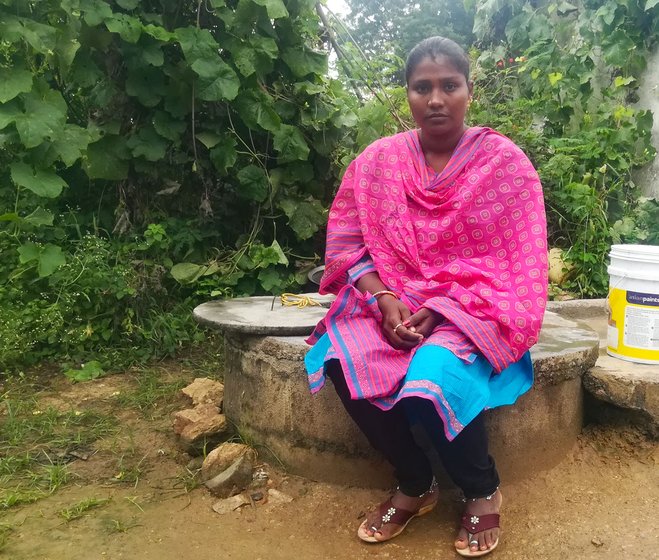 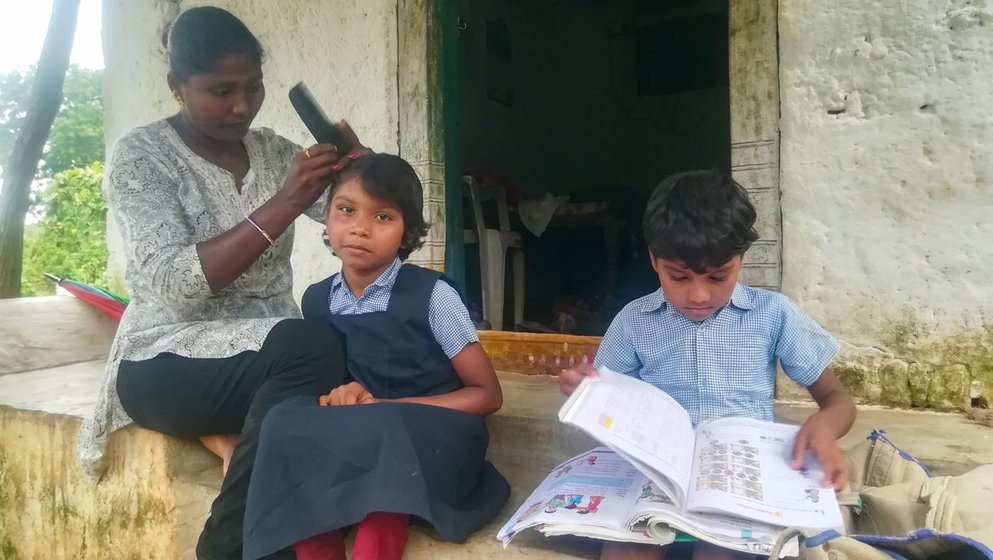 Sagarika lives with her kids Snehitta and Satvik in Narasapur village, in a house that belongs to her husband’s family

After Sammaiah passed away, Sagarika says she has learned a lot. “I do not get disappointed when people say [bad] things about me. I know I have to live for my children. I will work to educate them.”

She has not been able to repay any of loans taken by her husband, not even the smaller amounts. In 2020, she has been trying to repay loans taken from her sister (who cultivates, along with her husband, two acres in the same village), a total of another Rs. 62,000, and has managed to pay back Rs. 50,000. (The NSS 70th Round report notes that Telangana’s share of indebted agricultural households in the country at 89.1 per cent is much higher than the national level of 51.9 per cent.)

Sagarika gets a widow’s pension for Rs. 2,000 a month, and has received an occasional honorarium of Rs. 2,000 from the Rythu Swarajya Vedika, a farmer’s rights advocacy collective in Andhra Pradesh and Telangana, for doing work like help people fill forms for government schemes and going to the police station with them for verification processes.

She has not received the compensation of Rs. 6 lakhs from the government of Telangana, that’s given to a deceased farmer’s family members.

“Initially they [officials from the MRO] told me I would get ex-gratia. They kept asking me to visit again and again. Finally, they said [in December 2018] their investigation found that my husband was in conflict with someone in the village. So it was not a farm suicide. And that my file is closed,” recalled Sagarika. 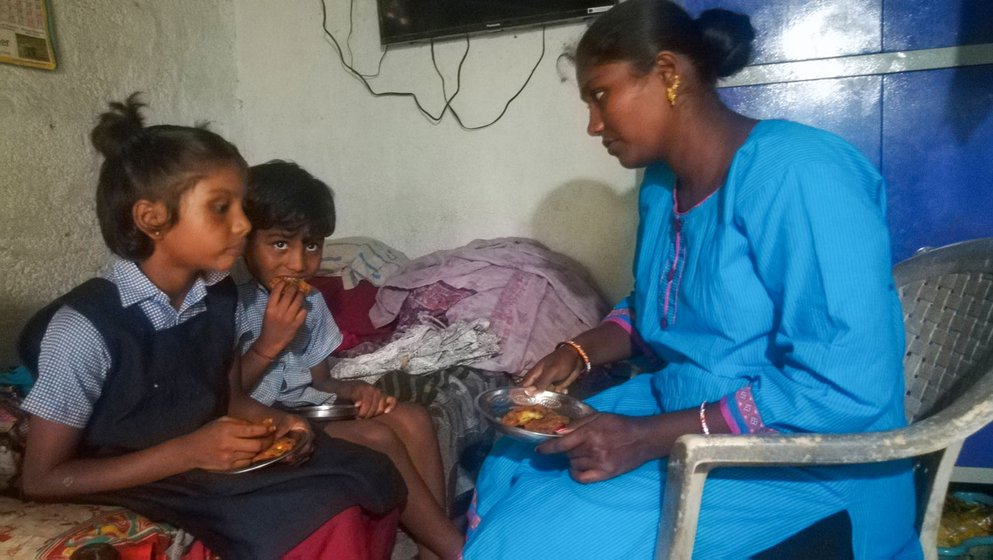 'We eat only rice and pickles now,' says Sagarika, as prices have increased after the lockdown

But the FIR does not mention any conflict and Sagarika inisits there was no conflict. After the suicide, she says, no officials visited her house to investigate the case’s ‘eligibility’. Every time she went to the MRO, she was told different reasons for why her case was closed.

In November 2019, still searching for details about why the case was closed, she asked for the status of her compensation though a RTI ( Right to Information ) application. In this, she was assisted by the Rythu Swarajya Vedika. Her application was sent to the Revenue District Office in Jangaon town in February 2020. She has not heard back yet.

And then, after the nationwide lockdown from March 25, with schools closed since then, she is concerned about her children. Snehitta was sent back home from her private boarding school in Jangaon district, Satvik studies in a government school in the village and has been home since the lockdown. “The children are always outside the house, playing. They are losing discipline,” says Sagarika, who has studied till Class 10.

“And prices of almost all items increased [with the lockdown]. Before it used to be Rs. 10 for a milk packet, now it’s Rs. 12. It became difficult for me to buy vegetables. We eat only rice and pickles now. In the evening, I give food if the kids ask me. If they say, ‘I am hungry’, only then. Otherwise, we just sleep.”

This story is based on interviews done on the phone between June and December 2020.

The reporter wishes to thank Hyderabad-based Lakshmi Priyanka Bollavaram of Rythu Swarajya Vedika, and Vineet Reddy, a postgraduate student, for their help with this story.

Riya Behl is a Content Coordinator at the People’s Archive of Rural India.