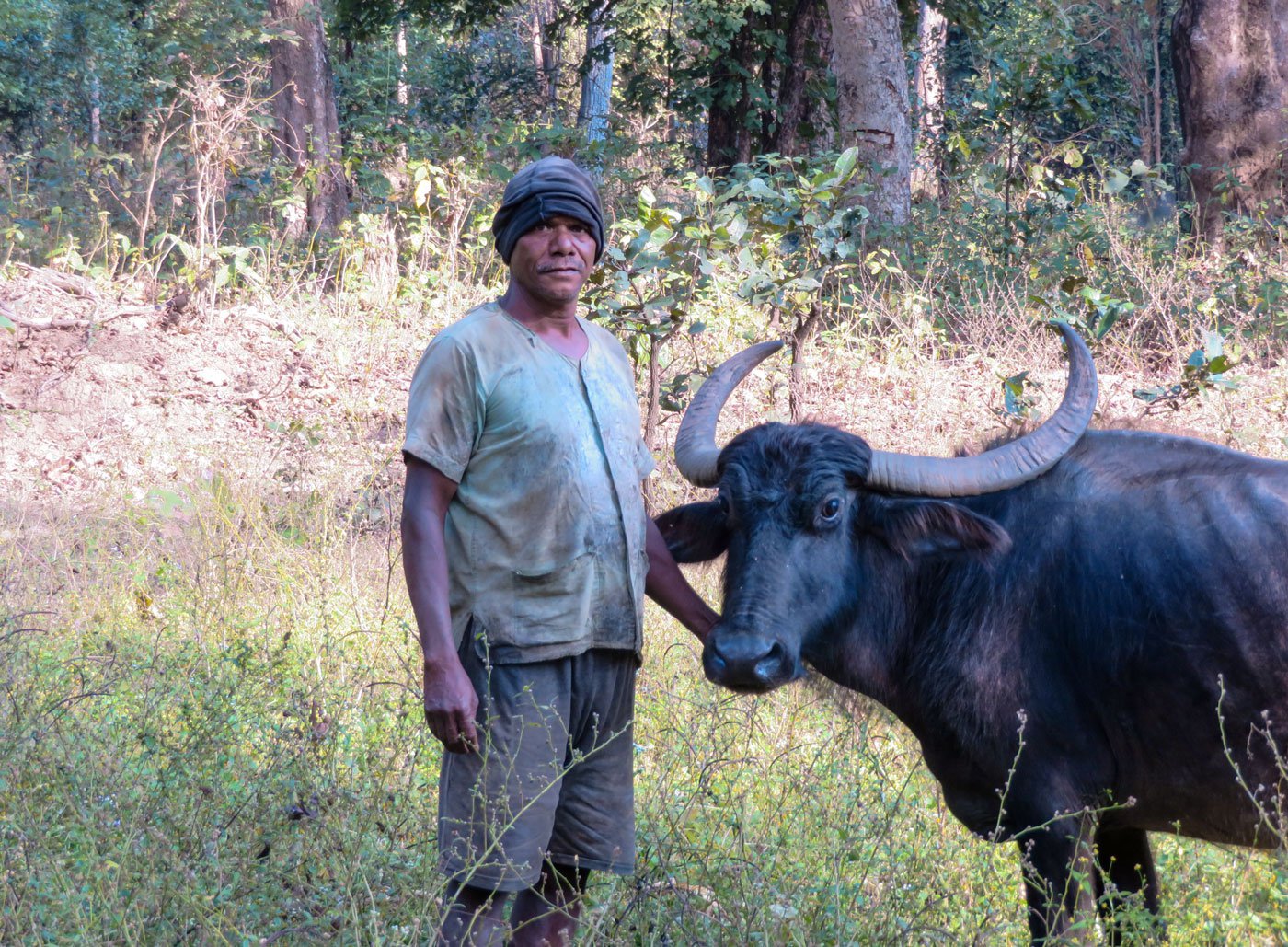 In Jabarra: till the buffaloes come home

Vishalram Markam’s beloved buffaloes venture on their own to graze in the dense forests of Chhattisgarh’s Dhamtari district. They return to him by evening, but the danger from hungry predators is always lurking

“I hit it with a stick, but it jumped at me and scratched my neck and arms with its paws. I was four kilometres inside the forest. My clothes were soaked in blood. I struggled to walk home.” Vishalram Markam spent the next two weeks in hospital recovering from that leopard attack. But he was happy that his buffaloes were unharmed. “The leopard even attacked my dogs. They ran away,” he says.

The attack took place in 2015. Markam laughs it off now, saying he’s seen predators up-close before and even after the attack. In Chhattisgarh’s Jabarra forest, where he grazes his buffaloes, one is likely to come across not just hungry leopards, but also tigers, wolves, jackals, wild dogs, foxes and wild boars, as well as sambhar and chital deer and the mighty bison. In summer, when the animals head for the few, sparse watering holes in the forest, chances of encountering hungry predators double, even triple.

“My buffaloes wander into the forest on their own. I go looking for them only if they don’t come back,” says Markam. “Sometimes my animals don't return till 4 a.m. I use a double [strength] torch to search for them in the jungle at night.” He shows us his feet, the many scabs and blisters from his barefoot trips into the jungle.

His independently-minded buffaloes wander 9-10 kilometres into the forest next to Jabarra village, in Nagri tehsil of Dhamtari district, in search of grazing grounds every day. “In the summer, they travel double the distance to find food. “One cannot rely on the jungle anymore; the animals could die of hunger,” says Markam. 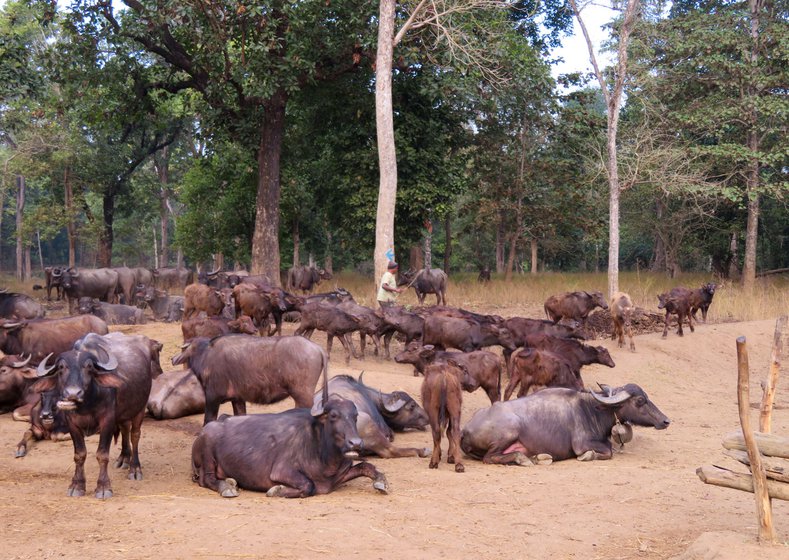 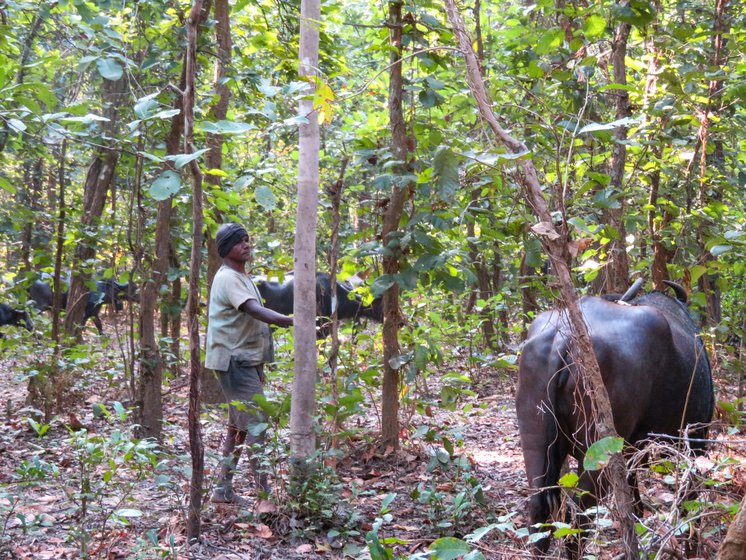 Left: Vishalram Markam's buffaloes in the open area next to his home, waiting to head out into the forest. Right: Markam with the grazing cattle in Jabarra forest

“I buy payra [dried leaves of grain stalks] for them to eat, but they are more interested in roaming around the forest and eating wild grass,” Markam says of his herd as if it were a brood of wilful children. And like all parents, he has a few tricks to bring them back – like a mound of salt, which they like to lick. This usually draws them home by around 8 p.m. ‘Home’ for the bovines is a large, fenced courtyard next to their master’s brick-and-mud dwelling.

A majority of Jabarra’s 117 households belong to Gond and Kamar Adivasi communities, and a few are Yadav (listed as Other Backward Class in the state). Markam, who is a Gond Adivasi, knows every detail of the 5,352-hectare forest. He has spent almost his whole life of about 50 years in its vicinity. “I studied up to Class 5 in the local school and then started farming here,” he says.

Situated in the eastern corner of Chhattisgarh, 52 per cent of Dhamtari district is reserved and protected area, and nearly half of that is dense forest, says a 2019 report of the Forest Survey of India. Apart from the widespread sal and teak trees, there are saj, koha, harra, bahera, tinsa, bija, kumbi and mahua.

Inadequate rainfall and a thinning canopy has, over the years, reduced the grazing land for animals. Markam says he reduced his herd from over 90 to the 60-70 buffaloes he now cares for, of which 15 are calves. “The food in the jungle for the buffaloes is reducing. If they stop cutting trees maybe it will increase,” he says. “I spent over 10,000 rupees buying chaara [hay] for my animals [in 2019]. Each tractor-load cost 600 rupees and I needed to make over 20 trips to collect it from the farmers.”

In summer, when the animals head for the few, sparse watering holes in the forest, chances of encountering hungry predators double, even triple

Watc video : ‘I’ll leave these animals only when I will die’

Markam can hope to increase the grazing area by exercising the ‘community forest resources rights’ awarded to Jabarra gram sabha in August 2019 under the Forest Rights Act of 2006. The law states, the community “has the right to protect, regenerate or conserve or manage” forest resources that it has been protecting traditionally. Jabarra is the first village in Chhattisgarh to have these rights.

“Which trees to protect and plant; which animals are allowed to graze; who can enter the forest; the making of small ponds; and measures to check erosion – all these decisions will now rest in the hands of the gram sabha ,” says Prakhar Jain, the district coordinator responsible for implementation of the Panchayat (Extension to Scheduled Areas) Act, or PESA, in Jabarra.

The legal provisions are welcome, says Markam, adding, many outsiders come into the forest and harm it. “I have seen men coming in and sprinkling pesticide in the water bodies to catch fish, and using poison to catch the bigger animals,” he says. “These are not our people.”

He says he’ll raise the issue of the shrinking grass in the next gram sabha meeting. “I haven’t done it so far because I don’t have the time. I keep gathering gobar [dung] till late at night, so how can I attend a meeting?” he points out, adding that he will speak up. “Our people have to unite against deforestation. If the forest is saved, our livelihoods will be safe. The responsibility of protecting the forest is in our hands.”

Located at the edge of the forest, Markam’s three-room pucca house has a large courtyard where he keeps the calves penned in at night. The bigger animals settle down in an open area next to it. 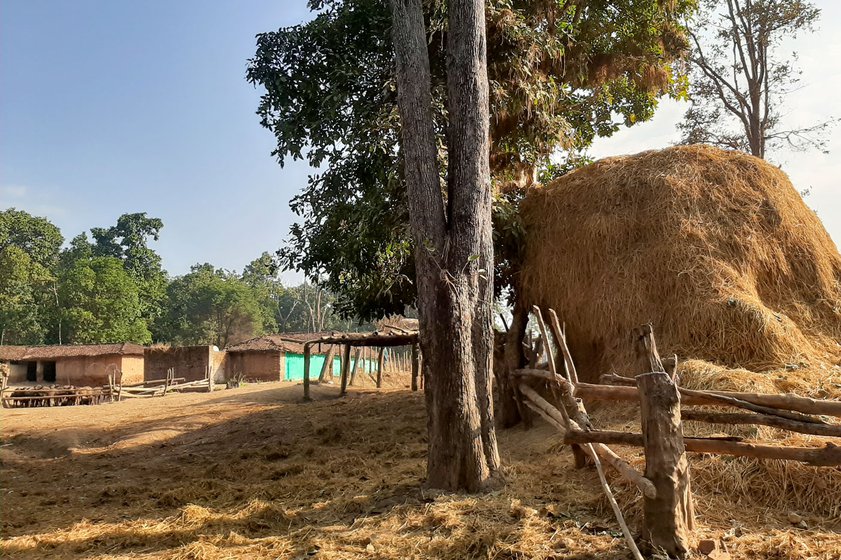 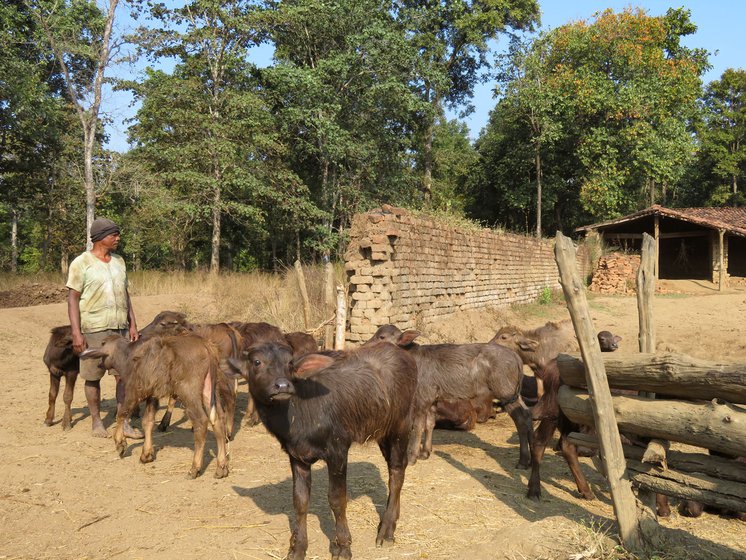 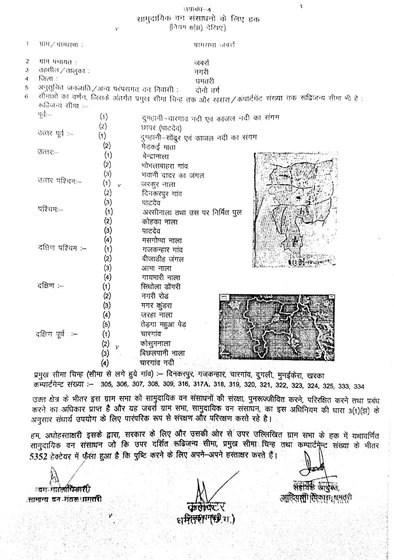 Left: A pile of hay that Markam has bought to feed his buffaloes as there isn't enough grazing ground left in the forest. Centre: He restrains the calves in his fenced-in courtyard to stop them from straying into the jungle. Right: The 'community forest resources rights' title granted under the Forest Rights Act to Jabarra gram sabha

It is 6:30 a.m. and the sun is up when we meet him. The embers of the wood fire he had nursed through the winter night are still glowing. A cacophony of restless, grunting animals and anxious calves fills the air around his home. Large milk cans are drying in the courtyard – the milk having been sent off to a trader in Dhamtari town. On a good day, says Markam, he sells 35-40 litres of milk, earning around 35 rupees a litre. The dung also sells. “Every day I collect dung in about 50-70 [bamboo] baskets. Plant nurseries buy it. I managed to sell a tractor-trolley worth of dung in a month, and earned 1,000 rupees [for each batch],” he says.

As he continues talking to us, he fixes a horizontal pole across two bars of the fence to corral the calves in the pen. He does this to hold them back from joining the bigger animals setting out to graze. “They are small, I can’t let them go too far from home or they could be snatched and eaten,” he says, raising his voice above the din of the bleating, jostling calves complaining at being restrained.

Besides herding his animals, Markam farms an acre of land, on which he cultivates paddy. He grows about 75 kilos in a year, all of which is consumed by him and his family. “I used to do [only] farming, and then I bought a female buffalo for 200 rupees and she gave birth to 10 calves,” he says, explaining how he ventured into rearing livestock. Most of Jabarra’s population of about 460 rely on farming small parcels of land for paddy, kulthi and urad legumes, and foraging the forest for non-timber produce such as mahua flowers and honey, as well as rearing some livestock. 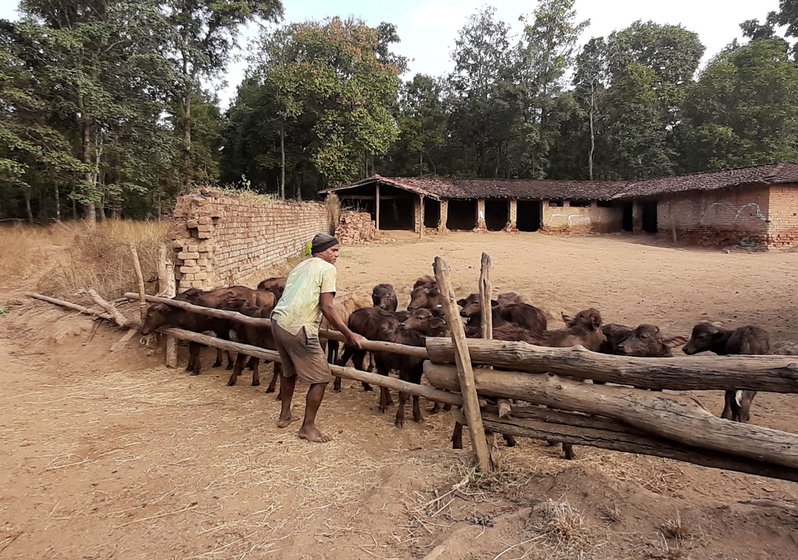 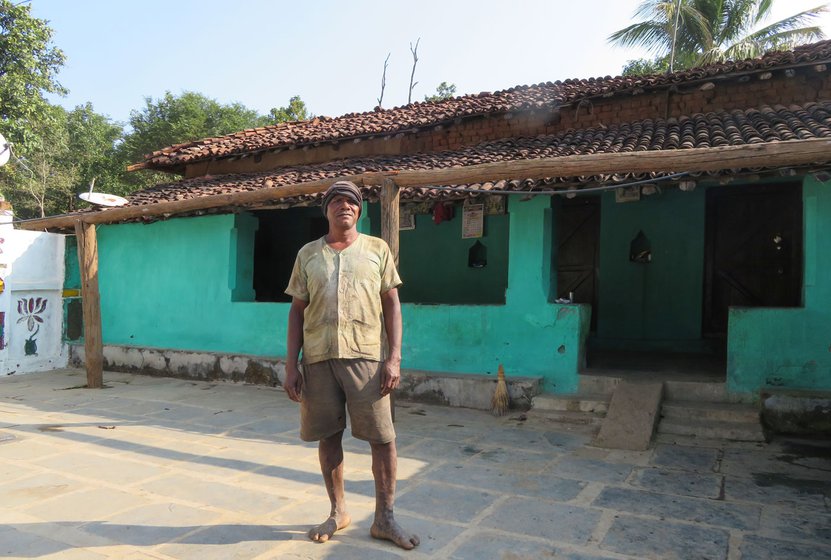 Left: Markam fixes the horizontal bars on the makeshift fence to corral the calves. Right: Outside his three-room house in Jabarra village

Markam lives with his wife, Kiran Bai, who helps with the care of the animals. Both his sons died young. His two remaining children, daughters, are married and live away.

During the Covid-19 lockdowns since March 2020, Markam suffered losses because he couldn’t deliver the buffaloes’ milk to the market in Dhamtari. “The eateries and shops were shut, so our milk delivery system was affected,” he says. He switched to making ghee , which has a longer shelf life, with Kiran Bai helping him stir the boiling milk and cream.

Kiran Bai, a Kamar Adivasi, is Markam’s second wife. He being Gond, the largest Adivasi group in Chhattisgarh, had to pay a price to marry her. “I had to spend roughly 1.5 lakh rupees on feasts, as penalty for marrying outside [the community],” he says.

With no heir to take over his work, Markam is worried about his animals’ fate after he passes on. “When I am not there my animals wander around. If I die, my animals will have to be let loose because there is no one to take care of them,” he says. “I am trapped in this job of caring for them. I will leave them only when I die.”

Watch Vishalram Markam speak about climate change in this video: Battle of the bugs: on wings of climate change , published by PARI on September 22, 2020.