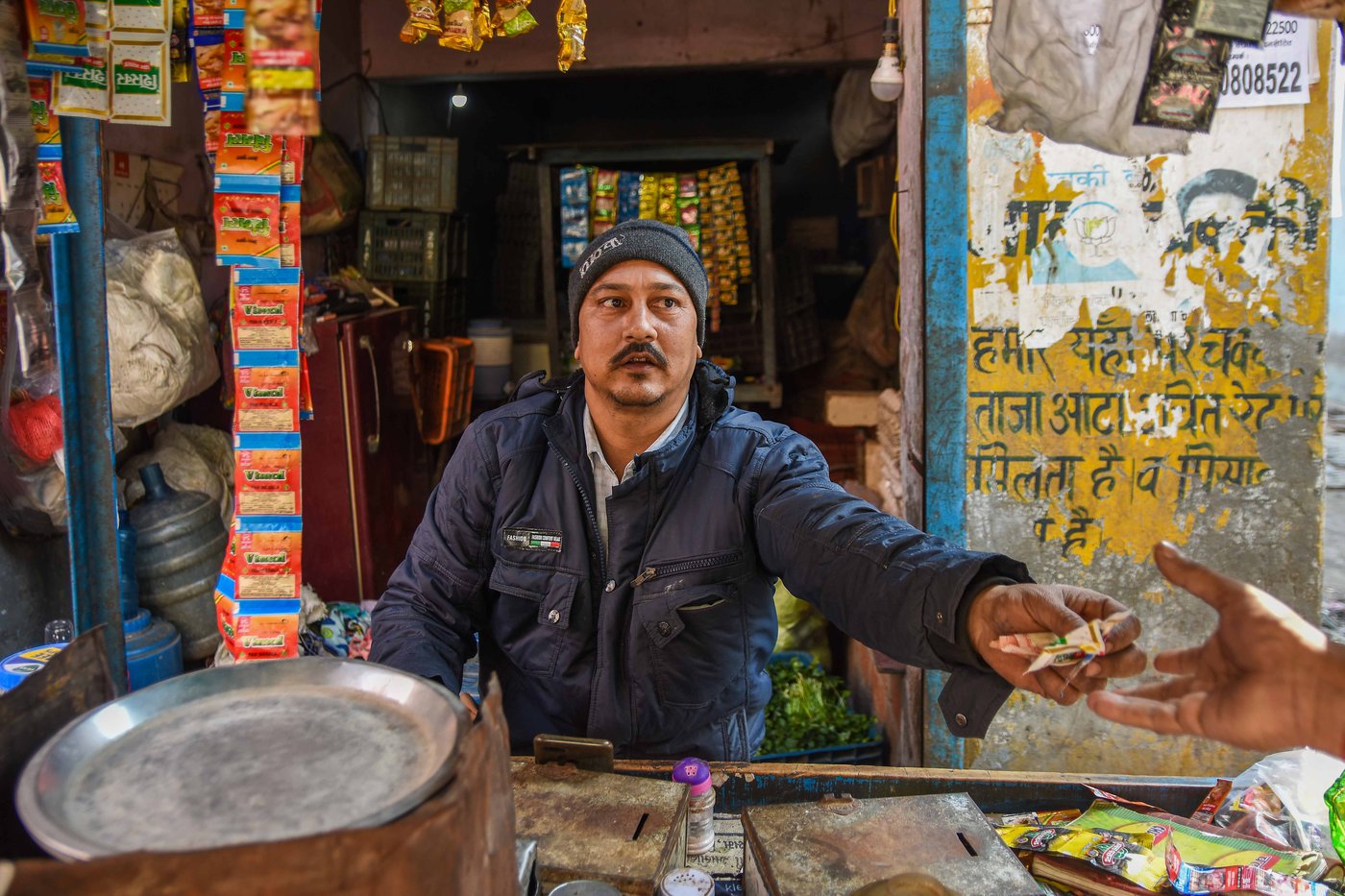 Despite a loss of income since the protests began, many small traders, shopkeepers, workers and vendors at and around Singhu on the Haryana-Delhi border stand in resolute solidarity with the farmers

“The company people are certainly irritated with the protest happening here. It has badly affected  transportation and the business is running poorly,” says 22-year-old Nizamuddin Ali, a security supervisor at a home appliances factory in the Kundli industrial area. He lives about six kilometres from the farmers’ protest site at Singhu, on the Haryana-Delhi border. (Kundli is an old village, now a municipal council, in Haryana’s Sonipat district).

Due to the disruption, Nizamuddin has not been paid by his company for over two months, but he remains supportive of the protesting farmers. “I understand the problems my factory faces right now, which have affected my salary. At the same time, I support the farmers,” he says. But his allegiance is not evenly divided – “If I support my factory 20 per cent, I support the farmers 80 per cent."

Nizamuddin came to Kundli some years ago from a village in Siwan district of Bihar, where, on 6.5 bighas of land (roughly 4 acres in Bihar), his family cultivates wheat, rice, arhar dal , mustard, moong dal and tobacco. “It's the farmers who grow these crops to earn a living, not the government or Ambani and Adani. I understand the pain of farmers across India. If these new laws take root, our access to rations will come to an end. The midday meals at schools won't be continued,” he says.

“We were told in Bihar [some years ago] that wheat will fetch 25 rupees per kilogram. Each farm family in Bihar got 2,000 rupees in their account [under the PM-Kisan scheme]. But later that 25 rupees rate got reduced to 7 rupees per kilo. We want to move forward, but the government is clearly pushing us back.” 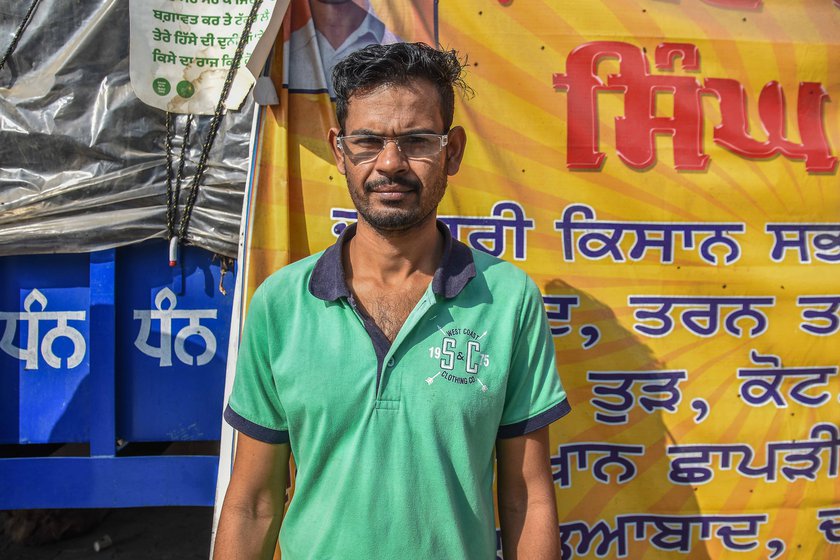 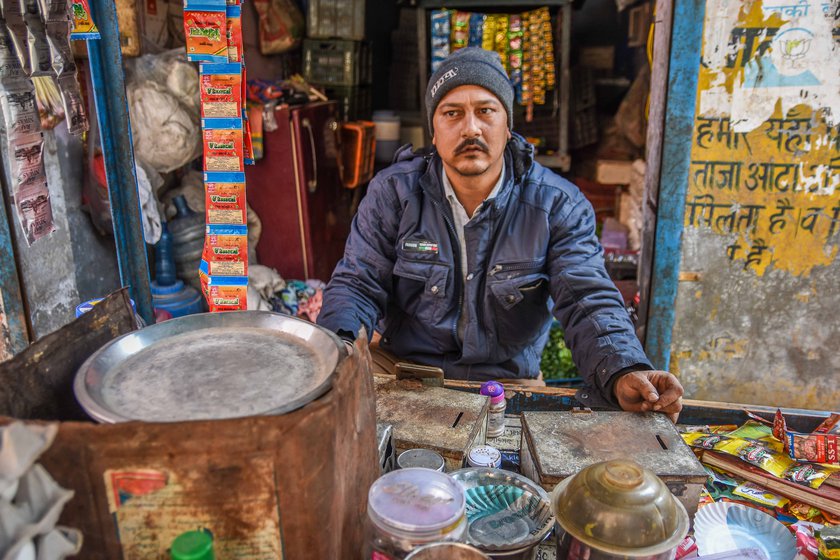 Left: Nizamuddin Ali, a security supervisor at a factory near the Singhu site, has not received his salary for over two months, but still supports the protesting farmers. Right: Mahadev Tarak, whose income has halved from his stall selling cigarettes and tea, says, 'We don't have any problems if the farmers stay here'

Talking to Nizamuddin Ali and others at Singhu – who are not part of the protesting groups – throws up a different picture from that which dominated the media for some days – of ‘angry locals’ clashing with the protestors.

Closer to the protest site, about 3.6 kilometres from the Singhu border in New Kundli,  45-year-old Mahadev Tarak runs a stall selling cigarettes and tea. His daily earnings have dropped after the protests began. “I used to make 500 to 600 rupees a day,” he says. “But these days I make half that amount.” In his area, ‘locals’ were seen some tiem ago raising slogans against the agitating farmers and demanding that the border be cleared.

But Mahadev still supports the farmers.

“I strongly believe that the ‘local people’ who came a few days ago and clashed with the farmers do not belong to this region,” he says. “We don't have any problems if the farmers stay here. All the shopkeepers you see in this locality support the farmers. Their protests benefit even middle-class people. But some aren't understanding this simple fact.”

A woman running another small shop near Mahadev’s refuses to comment. "I am a Muslim, I don't want to tell you my name and I do not want to talk about the farmers’ protest going on here,”  she says, as she covers her face, and then turns with a smile to her farmer customers to sell them cold drinks, chips and cigarettes. 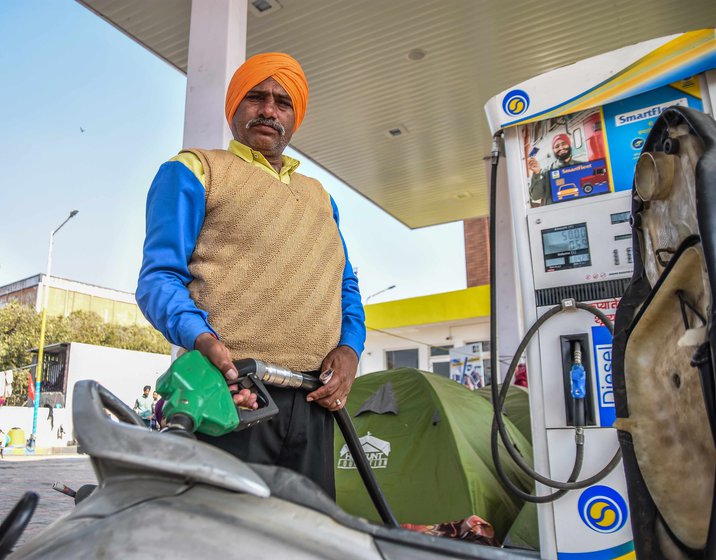 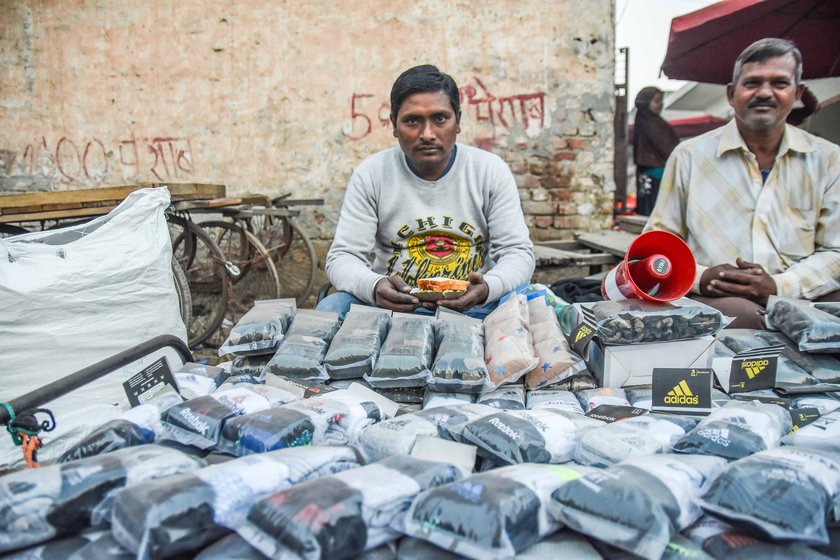 Ramdari Sharma, who works at a petrol pump near the Singhu site, asserts that his support for the protesting farmers is for a better future for the country. Right: Deepak's socks' sales have been hit, but he says, 'Don't think that I won't support the farmers. Their problems are much greater than my own'

Some two kilometres from where the Singhu border begins, Ramdari Sharma, 46, works at a petrol pump. Business is down to around Rs. 1 lakh a day, compared to 6-7 lakhs earlier. Ramdari commutes to work every day from Jatikalan village in Haryana’s Sonipat district, four kilometres from the border. His family owns 15 acres of land in the village on which his brother grows wheat, rice, and jowar.

"Everything on the market has an MRP (maximum retail price) of its own,” he says, “but we don't have anything of that sort. It is our right to determine the prices of the produce we grow. We cultivate the crops, so why should anyone deprive us of the right to sell our produce ourselves? One litre of [bottled] drinking water sells at 40 rupees. For farming even a small plot of land, we require thousands of litres of water. Where will the money come from? Floods occur. Sometimes we have droughts. Crops get destroyed. We think uparwala [god] will protect us. And he does protect us, but then someone comes in the middle and messes up everything.”

Having seen the hardships of farming in his family, Ramdari asserts that his support for the protesting farmers is not merely for the here and now, but for a better future for the country. “Bhagat Singh was hanged in India. Besides thinking about his countrymen of the time, he also thought about a better future for independent India. My life will anyway pass, but I want to make the lives of our future generations more secure. That is why I am supporting the protests,” he says. 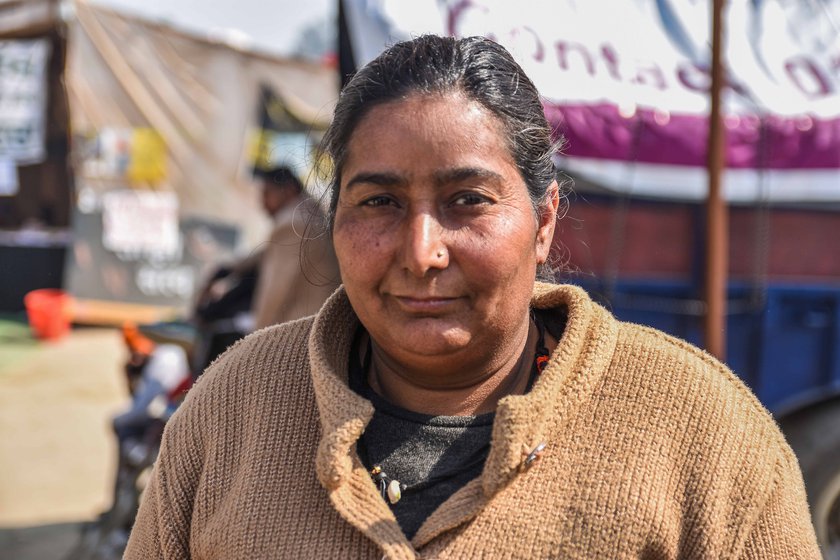 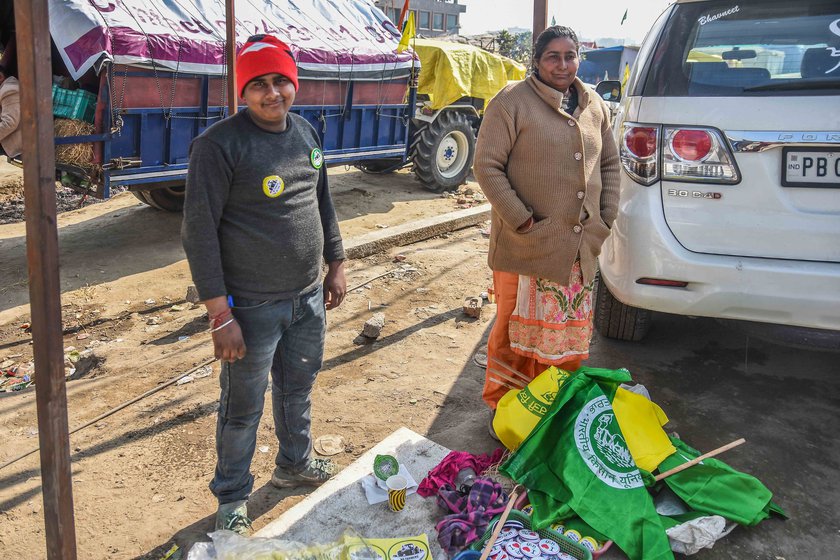 Rita Arora, who sells protest badges, flags and stickers on a street near the Singhu border, says, 'We get our food from farmers. It's impossible to ignore them'

The laws that the farmers are protesting against are The Farmers’ Produce Trade and Commerce (Promotion and Facilitation) Act, 2020 ; The Farmers (Empowerment and Protection) Agreement on Price Assurance and Farm Services Act, 2020 ; and The Essential Commodities (Amendment) Act, 2020 . They were first passed as ordinances on June 5, 2020, then introduced as farm bills in Parliament on September 14 and hastened into Acts by the present government on the 20th of that month.

The farmers see these laws as devastating to their livelihoods by expanding the space for large corporates to have even greater power over farmers and farming. The laws have also been criticised as affecting every Indian as they disable the right to legal recourse of all citizens, undermining Article 32 of the Constitution of India.

“ Yeh kisan hai [these are farmers],” says 52-year-old Rita Arora, who sells badges, flags and stickers related to the farmers protest on a street about 1.5 kilometres from the Singhu border. “These people have been sitting out in this terrible cold for so many days. When the government asks for votes before the election, they promise good things. But when they come to power? Look at the perils these three laws passed by the government pose for these people. We get our food from farmers. It's impossible to ignore them.”

Rita had a tiny shop near the India Gate in New Delhi, where she used to sell cold drinks, chips, cigarettes and more. Her business was badly hit during the pandemic, and after shouldering a heavy financial loss, she decided to come to Singhu to try and earn an income. “I was selling shoes at the beginning [of the protests],” she says, “and didn't know about the laws or why the farmers were protesting. But then I talked to people and understood the laws. I realised that whatever the government has been doing is wrong.” 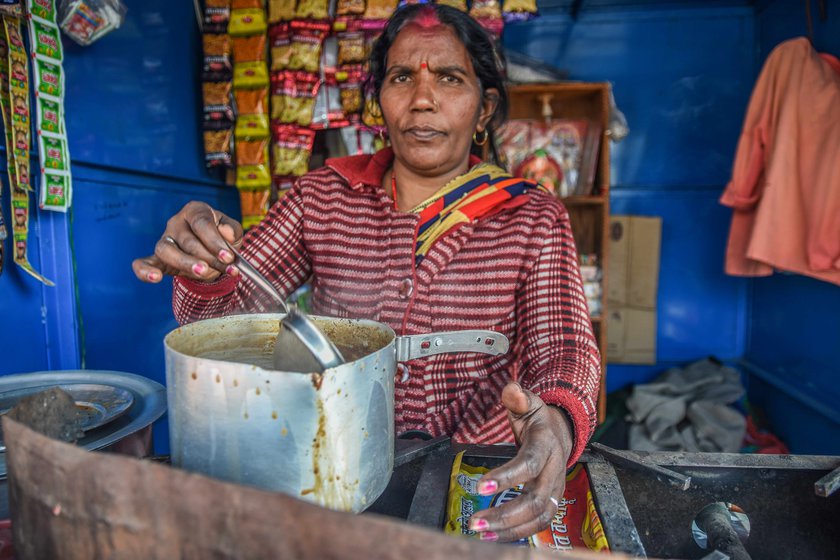 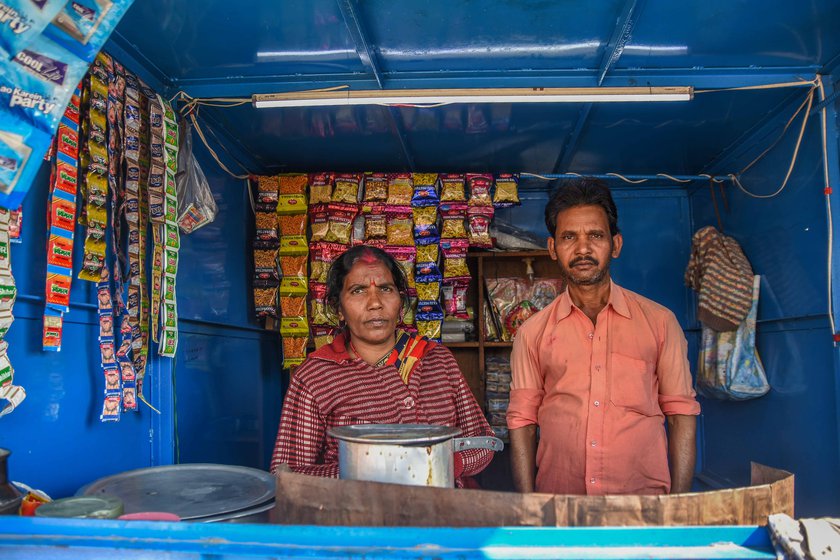 Khushmila Devi, who runs a tea stall with her husband Rajender Prajapati near the protest site, says, 'The farmers provide us food. They are the basis of our existence'

She does not earn much now, but is happy to be here. “My income is just around 200-250 rupees a day. But I do not regret it at all," she says. "I am happy that I am part of this protest. I request the government to repeal the farm laws immediately."

About a kilometre away from Singhu, Deepak has been selling socks on the streets. He travels every day by autorickshaw to set up his makeshift shop at the border. He also grows cabbage on the small patch of land he owns in Kundli municipal council area. “More than two months have passed since the protests began here. My income has gone down sharply. I used to earn 500-600 rupees a day before the protests, but now I earn barely 200-250 rupees a day. But please don't think that I won't support the farmers. Their problems are much greater than my own,” says 35-year-old Deepak.

Also roughly one kilometre from the Singhu border, Khushmila Devi, 40, and her husband Rajender Prajapati, 45, run a tea stall. They commute six kilometres every day from Narela in New Delhi, and have seen their income drop drastically with the continuing protests. “We used to earn about 10,000 rupees a month, but now that’s fallen to just 4,000-6,000 rupees. Moreover, the route from Delhi to Singhu has been barricaded since January 26, adding to our problems. But still, we support the farmers,” says the couple.

“First, they [the government] brought demonetisation,” adds Khushmila. “Then they imposed GST, and then came the pandemic and lockdown, when we suffered for several months continuously. Besides, the prices of all commodities are rising. The farmers provide us food. They are the basis of our existence. If we don't stand by them, then who will?"

Other stories by Anustup Roy