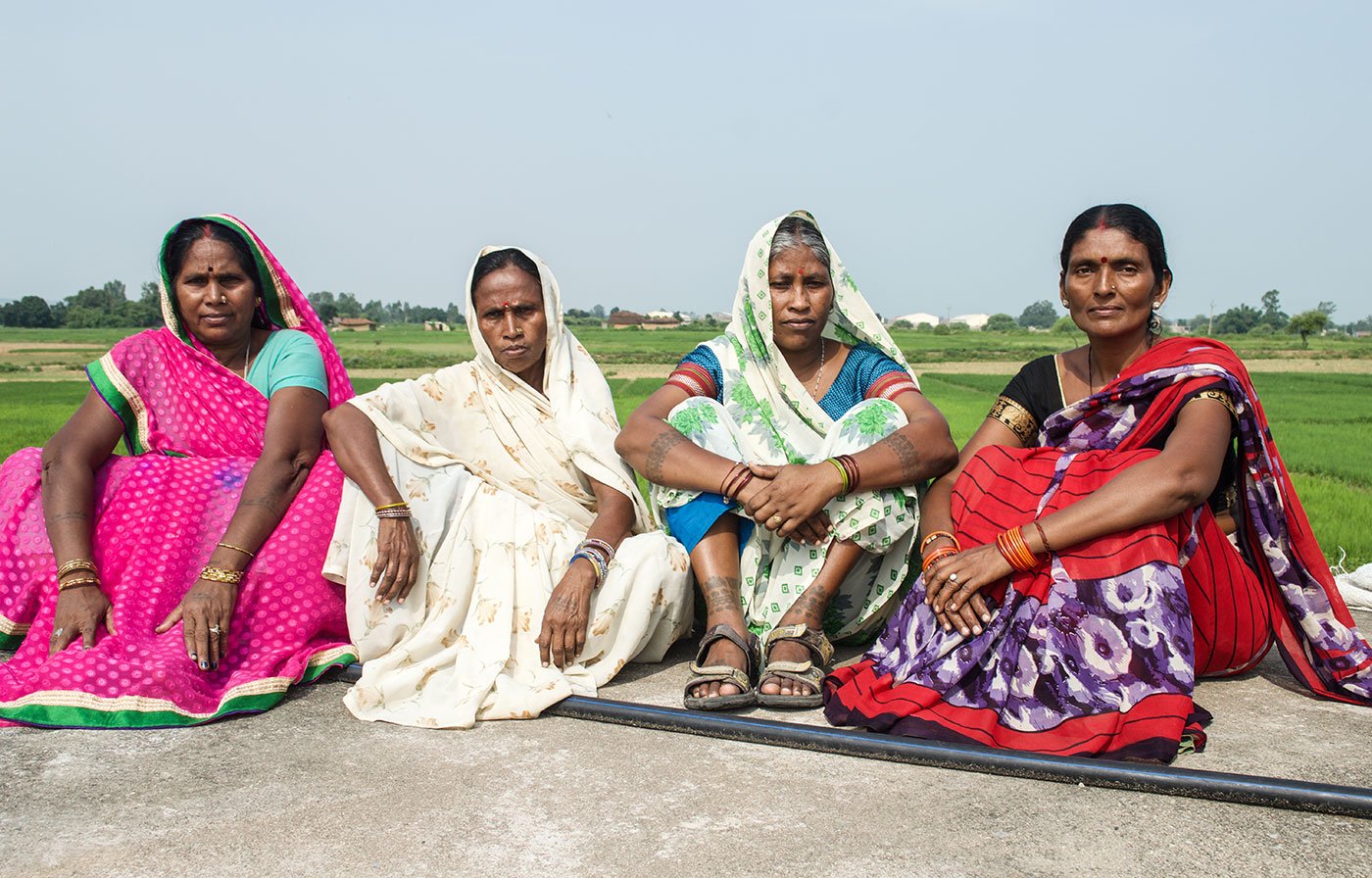 'I knew I was going to jail that day…'

When Adivasis fight to reclaim traditional forest rights and land, the fallout can include imprisonment, which is especially hard for women – as it has been for Rajkumari and Sukalo of Uttar Pradesh's Sonbhadra district

“I was in jail because I fought for my land, not because I committed a crime. I wasn’t afraid of jail then and I’m not afraid now, ” says Rajkumari Bhuiya.

Rajkumari, around 55 years old, is from the Bhuiya Adivasi community in Dhuma village of Sonbhadra district, Uttar Pradesh. In 2015, she spent over four months in jail after participating in protests against the Kanhar irrigation project. Activists and local communities are against the construction of the dam on the Kanhar river in Dudhi block, fearing displacement and pollution of their source of water.

According to news reports, during the protests in April that year, the police fired into the crowd and began arresting people. Rajkumari ( second from left in the cover photo on top ) was picked up a few days later, and taken to the district prison in Mirzapur, around 200 kilometres from Dhuma.

Sukalo Gond , a member of the same union as Rajkumari – the All India Union of Forest Working People (AIUFWP) – was at the Kanhar protest too. “I was born in Kanhar, and I wanted to support the community. I wasn’t there when the police fired bullets [on April 14, 2015, around 10 a.m., for about two hours]. I went there after that, but it turned violent, so we all left and went in different directions. Rajkumari went her own way, and I went mine,” she says. ( Since the the interview for this story was done, Sukalo has been re-arrested and is in jail again. Also see: https://cjp.org.in/sonebhadras-daughter-sukalo/ )

“I was away for weeks,” Sukalo ( second from right in the cover photo on top) continues. “I walked for five hours to the home of a distant relative, an Adivasi family who understand our pains. I stayed there for two nights, and then went onto the next home, where I stayed for another 10 days, and then the next home.” 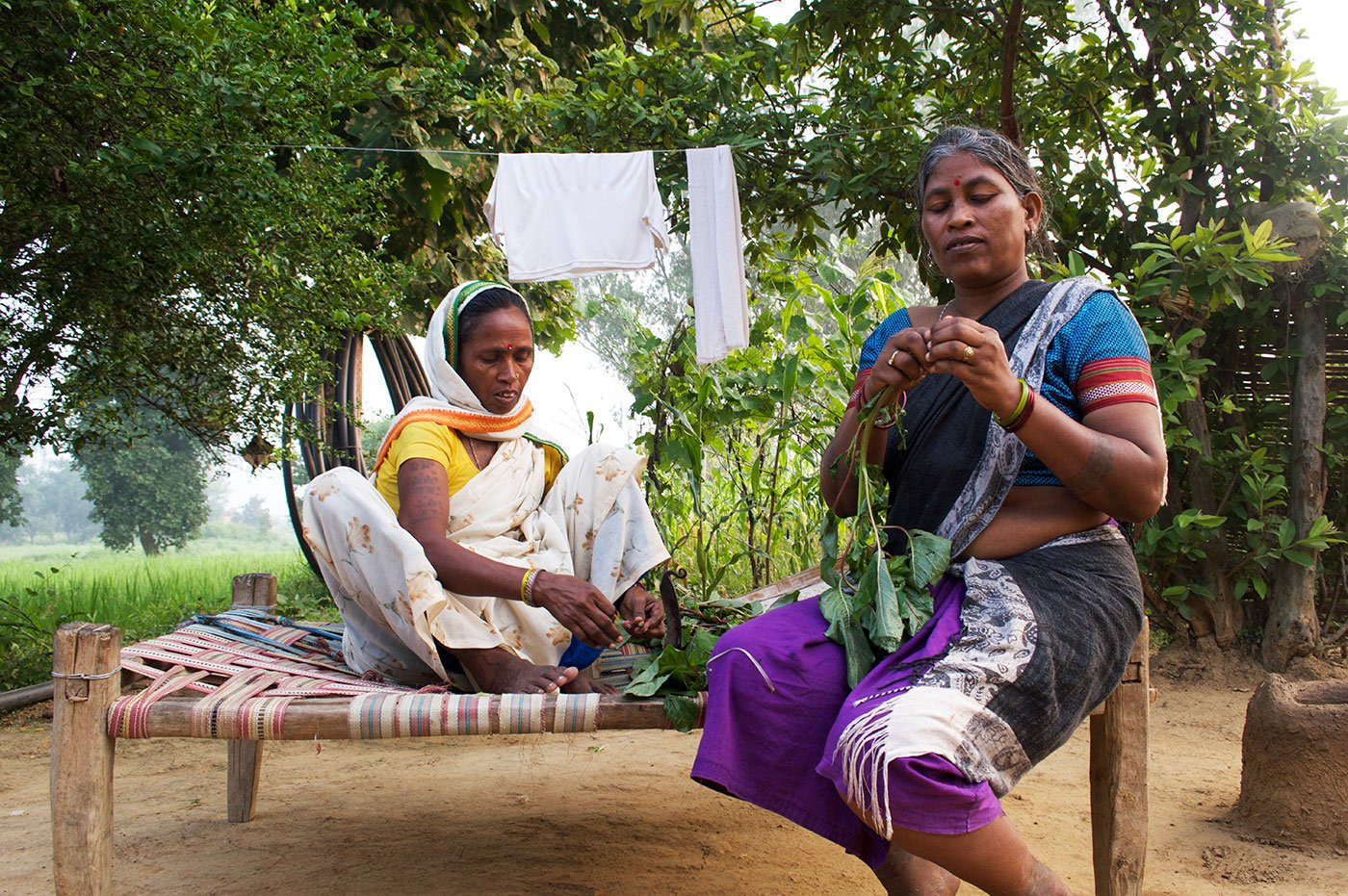 Sukalo, around 51 years old, is from the Gond Adivasi community, and lives in Majhouli village of  Dudhi block. She says she was not afraid. “I know my children were worried, but I tried to stay in touch with them over the phone. I finally went home in June.”

Later that month, when Sukalo came to Robertsganj town for a meeting with AIUFWP members, she was arrested. “It was June 30, 2015. Soon the [union] office was surrounded by dozens of cops — it felt like a 1,000 to me! I knew I was going to jail that day….”

Sukalo spent around 45 days in jail. “What is there to say? Jail is jail. Of course it was hard, our freedom was taken away, it was hard not to see anyone. But I knew I was in jail because of this movement, not because I was a criminal. I didn’t eat much, even though my comrades asked me to. My heart wasn’t in it. But I survived jail, and that made me stronger.”

Sukalo was let out on bail but still has about 15 cases pending against her, according to her calculations, including for rioting, dacoity, and carrying a weapon. Rajkumari too has multiple similar cases registered against her at the Dudhi police station.  It has involved frequent trips since 2015 to the junior magistrate's court in Dudhi town to get court dates, sign papers and confirm that she has not left town.

She does not remember details of all the cases and leaves that to her lawyer, Rabindar Yadav, who says that many of the cases are false. However, he adds, “They [those associated with the AIUFWP, which also covers her legal fees; see also https://cjp.org.in/cjp-in-action-defending-adivasi-human-rights-activists-in-courts/ ] must have done something, otherwise why would the police file cases?” Rajkumari does not seem surprised by this. “Justice is not straight,” she says. 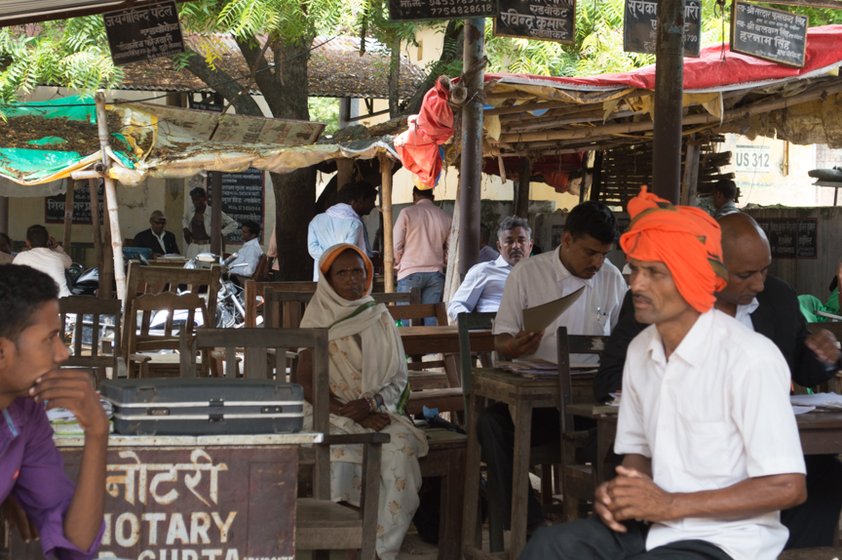 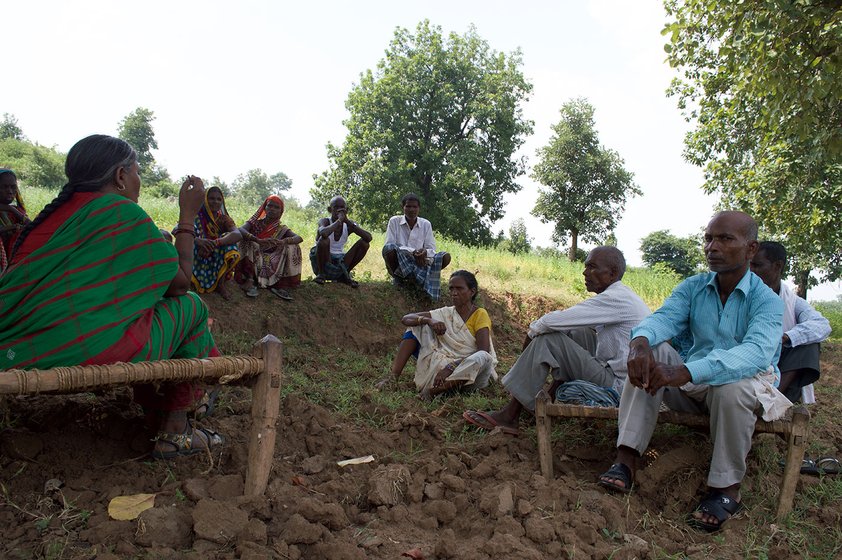 Rajkumari (middleground, centre) with her lawyer Rabindar Yadav to her left in Dudhi; and leading a community meeting in her village

“They [the police] targeted me because I was working with the union. When they  picked me up,” she recalls, “I wasn’t even allowed to drink water. In jail, we got a plate, a lota [mug], a blanket, a bowl, and a mat. We were up at 5 a.m. We would make our own food. We would clean the jail. Our drinking water was dirty. Inside, the capacity is only 30 women but sometimes there would be almost 90… A baby too was born in the jail. There was a lot fighting between the jailed women [over space, food, soap, blankets]. The jailors would make us sleep in the bathroom sometime because there was no space.”

When Mulchand Bhuiya, Rajkumari’s husband, who is also a member of the union, heard his wife was in jail, he says he was upset. “I didn’t know what to do. My first thought was about my kids – how will we manage? I sold my wheat crop to raise enough money to cover her bail. Otherwise I keep my wheat for our family. My oldest son quit his job to focus on getting her out of jail, another son went to Delhi to work to send money back. We suffered such a loss with her gone.”

Like Rajkumari and Sukalo’s communities, Adivasis in several parts of the country have for decades experienced harsh repercussions for protesting against projects and policies. When the protesters or prisoners are women, it gets even harder.

"Every instance of a woman in prison is a case of double jeopardy. They suffer the burden of social rejection and an unequal legal battle," says Smita Chakraburtty, an independent researcher working on prison reform in India, and the Honorary Commissioner on Prisons appointed by the Rajasthan State Legal Services Authority to study open prison systems. "When it’s a male prisoner, especially if he is a bread earner, his family will try to get him out of prison to the best of their capabilities. But women prisoners are abandoned by their families sooner rather than later. Prison is a taboo. A prisoner suffers the burden of the criminal tag, it doesn’t matter if the prisoner is an undertrail, acquitted or convicted. Women are additionally vulnerable to social rejection and it is difficult to rehabilitate them."

( See also the stories of Lalti, extreme left, and Shoba, extreme right, in the cover photo on top: Take us, it is better than taking our land ')

'The women are fighting on many fronts'

Sukalo joined the All India Union of Forest Working People in 2006 after attending a rally in Robertsganj, and eventually became its treasurer. “When I got back home [from the rally], I told my husband  I wanted to join, but he was working at the thermal power plant [in Rihand] and said, how can you join, who will look after the children?  I said no, I think this will be good for us, so then he said okay.” She smiles.

Sukalo and her husband Nanak are farmers too; they have four daughters, and had a son who died. Two daughters are married, and two Nishakumari, 18, and Phoolvanti, 13, are at home. “I got involved right from when I went for the first meeting. I jumped right in and never missed a meeting. It felt good because we were building a strong community, and for the first time in my life I felt strong. I had never thought about my rights before; I had just got married and had kids and worked [at home and as a farmer]. But after I joined the union, I realised my rights, and now I am not afraid to ask for them.” 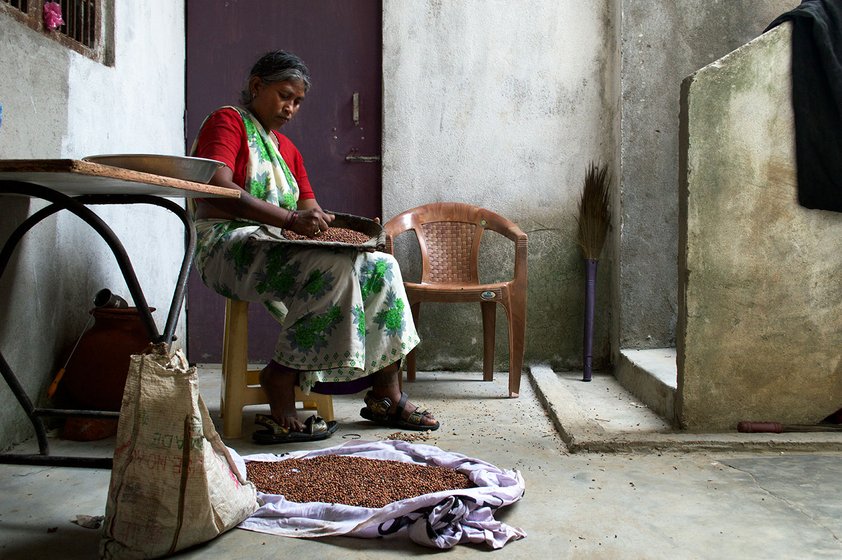 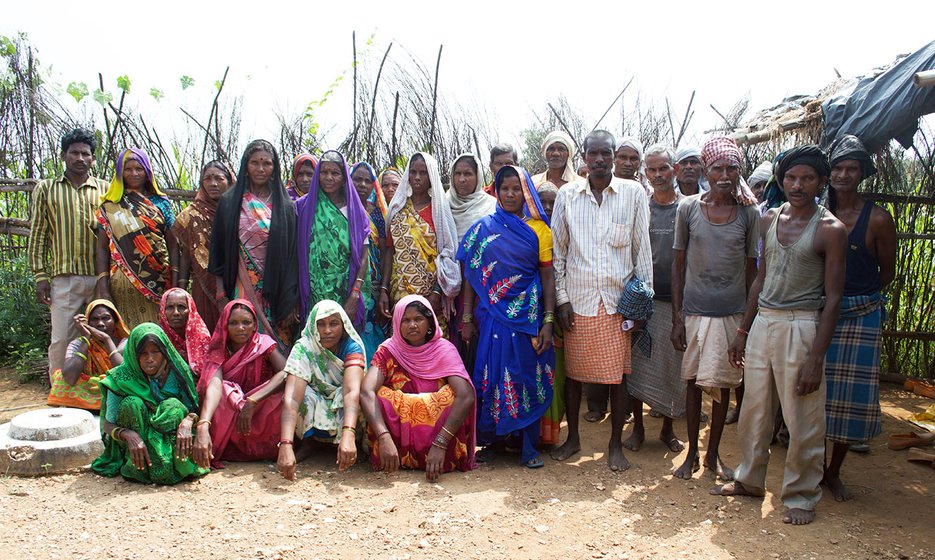 Sukalo at the union office in Robertsganj; members of the union near Majhouli village

The AIUFWP (originally the National Forum of Forest People and Forest Workers, formed in 1996) was set up in 2013. It has roughly 150,000 members in around 15 states, including Uttarakhand, Bihar, Jharkhand and Madhya Pradesh.

In Uttar Pradesh, the union works in 18 districts with about 10,000 members. Around 60 per cent of its leaders are women and their main demand is the implementation of the Forest Rights Act (FRA) by recognising the authority of gram sabhas (village councils) and giving self-governing options to forest communities. The FRA was enacted in 2006 to address historic economic and social injustices faced by Adivasi and other communities for decades.

“These women are fighting on many fronts,” Roma Malik, general secretary of AIUFWP, says. “The FRA is supposed to give communities access to land, but it is a struggle. Tribal women have tougher obstacles – they are invisible to most people. The men in power don’t want to give people land even though we have the law on our side now. Sonbhadra district is still run like a feudal state, but the women are working together to fight for their land.” 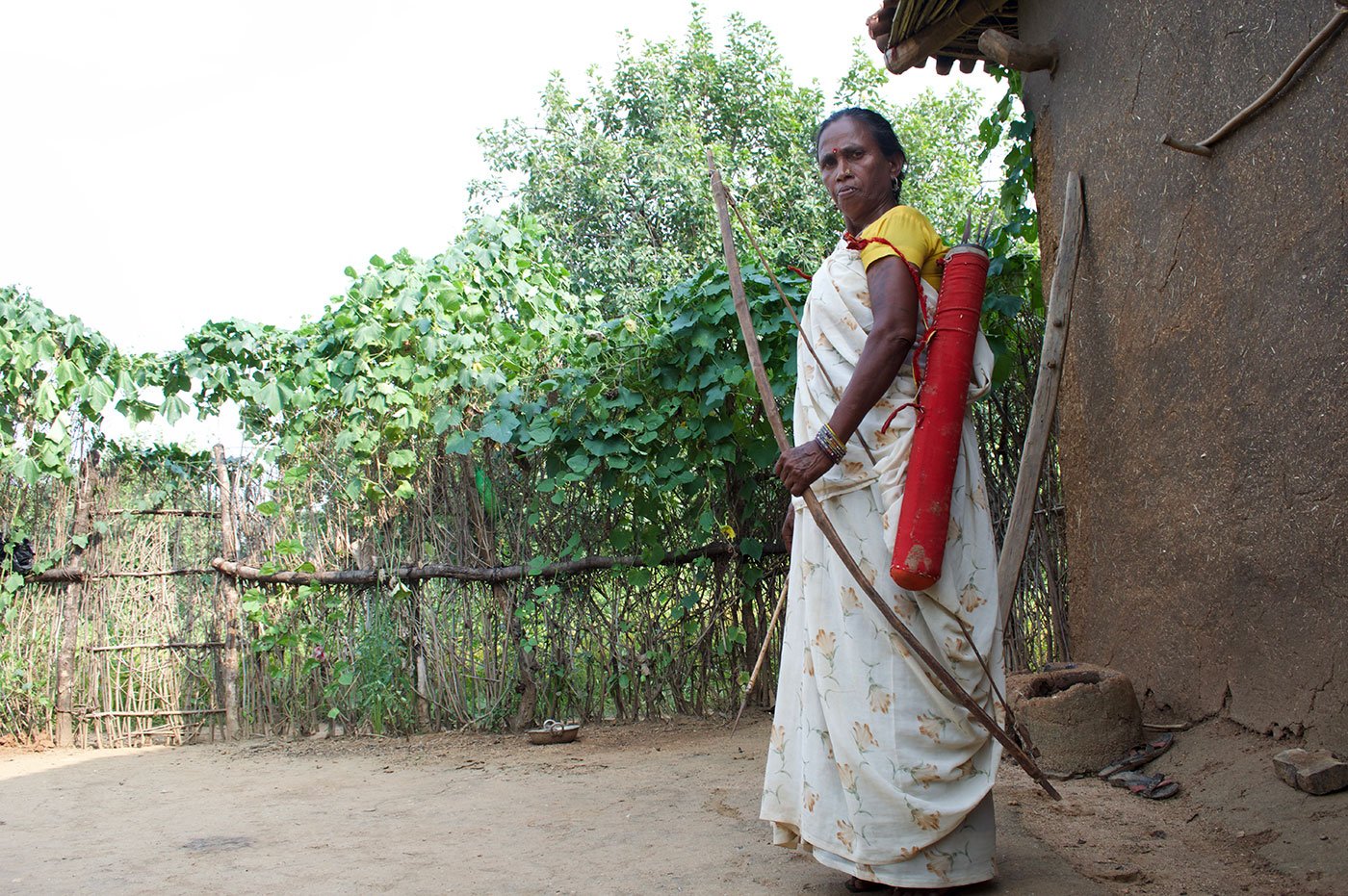 Rajkumari with her community's traditional bow and arrows. She says she will not back down and give up her land

Rajkumari joined the union in 2004. On a small plot of land, she and her husband Mulchand used to grow vegetables and wheat. And they worked as farm labourers too. But it was not enough to feed their family. In 2005, Rajkumari and Mulchand, along with many other families, reclaimed land in Dhuma – taken by the forest department – as their own original land. A year later, while continuing to cultivate on the old plot, they built a new house on the reclaimed land.

Rajkumari wants to continue her work on land rights through the union. She says she needs help from the other women in her community because of her fear of the forest department. But she does not want to back down and give up her land. “Powerful people play with Adivasis, ” she says with a grimace. “We are toys for them.”

On June 8, 2018, Sukalo was arrested along with two others at the Chopan railway station in Sonbhadra, after complaining about anti-Adivasi atrocities at a meeting with Uttar Pradesh forest officials. They were taken to the prison in Mirzapur. “Her name was not in the FIR,” says Roma Malik. “Yet she was caught to teach her a lesson. Her health has gone bad and she has not eaten food in protest. She is surviving on chana and fruits brought by friends. She has not been granted bail.”

A habeas corpus writ petition was filed by lawyers in the Allahabad High Court alleging Sukalo and the others were illegally detained. The petition was dismissed on September 19. On October 4, Sukalo was granted bail, but her release has been held up due to procedural delays. She and her comrades continue to be in jail.

This article was done as part of the National Foundation of India Media Awards Programme; the author was a recipient of the fellowship in 2017.